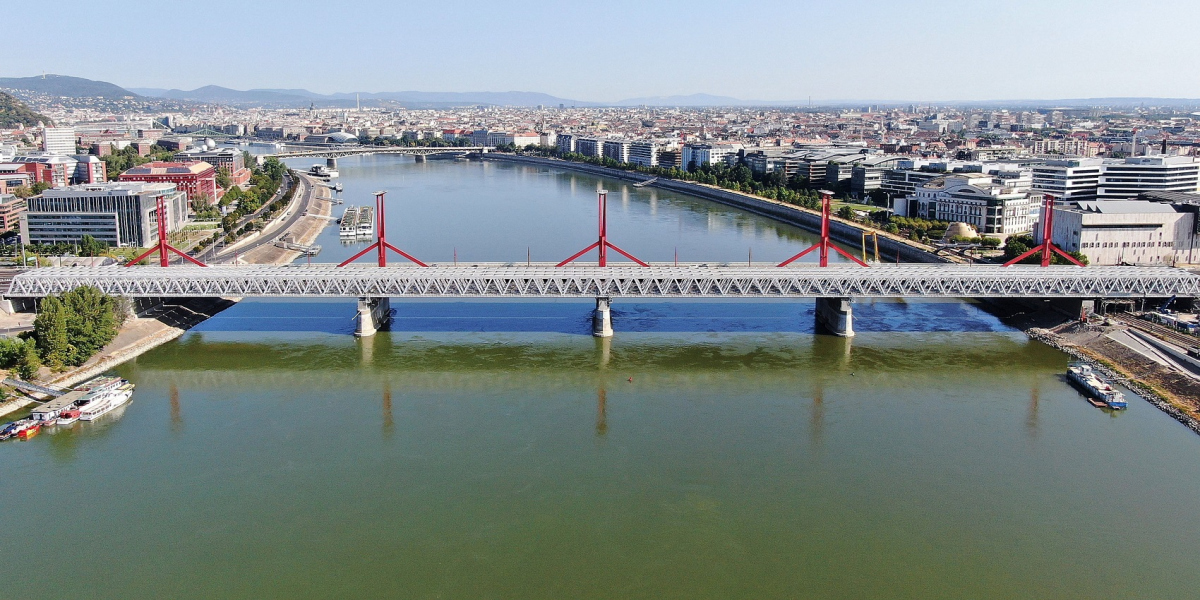 Bridge inauguration: the renovated and expanded southern connecting railway bridge was handed over

The first railway crossing was originally built in 1877 on the part next to today's Rákóczi bridge, the bridge has been rebuilt several times since then, expansion of its capacity was proposed as early as the 1910s, but it was only recently expanded to three tracks. The line is one of the country's most important east-west railway connections. 150 passenger and 100 freight trains cross the approximately 500-meter-long bridge every day, and 2.8 million passengers used it last year.

One of the most important railway connections between Eastern and Western Europe runs through the southern part of Budapest - stated the state secretary responsible for transport of the Ministry of Technology and Industry (TIM) at the handing over of the renovated Danube bridge connecting the south in Budapest on Thursday, according to MTI. Dávid Vitézy highlighted that the renovated bridge plays a significant role not only in passenger rail traffic, but also in international freight traffic, because three of Europe's most important trans-European rail corridors pass through here. They connect the Dutch ports and Spain with Romania, the Black Sea, the Balkans or Ukraine. 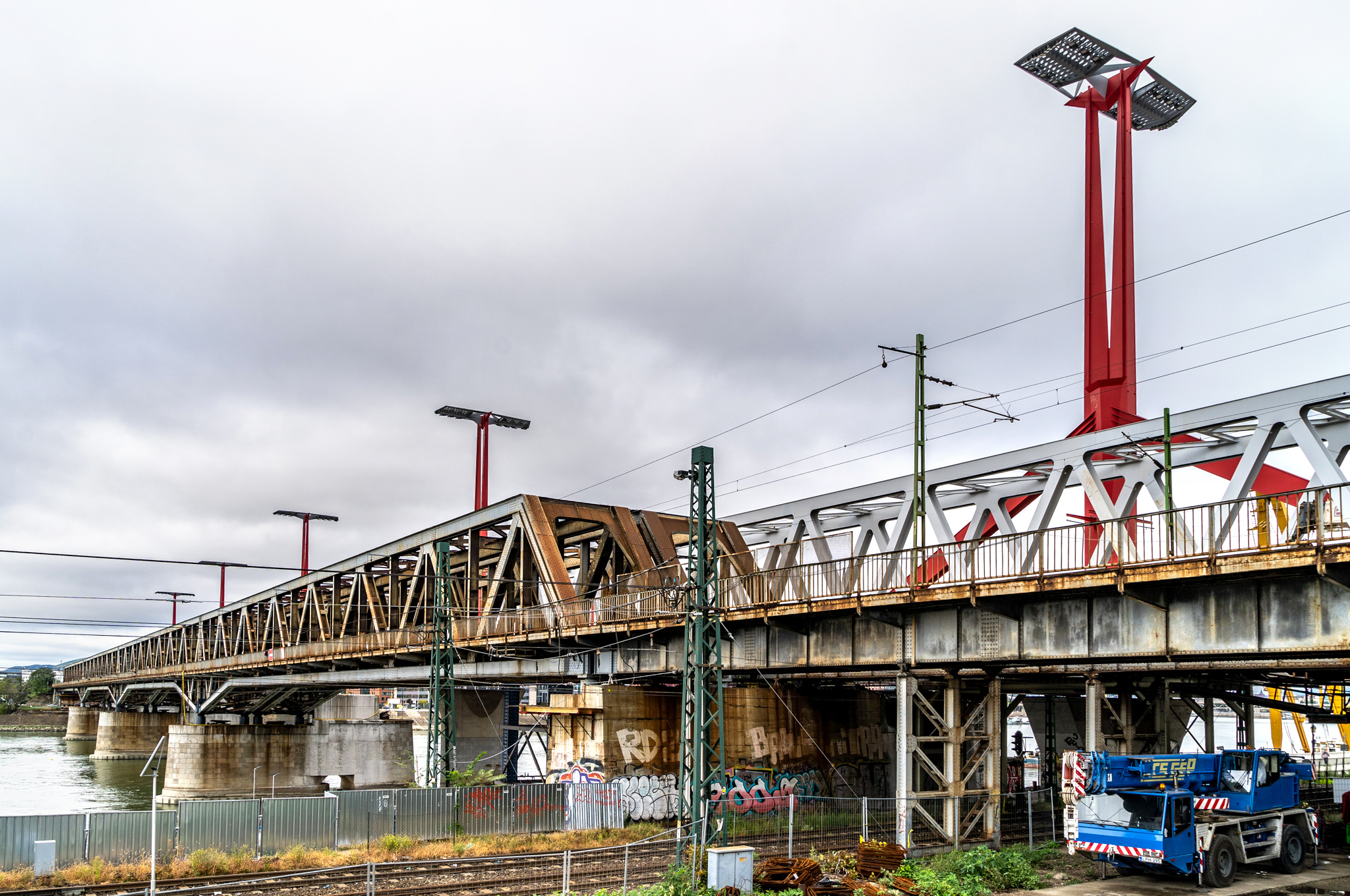 This is how the bridge was built: in October 2020, you can see the two rusty, old bridge elements on the left, and the new, white structure on the right (Photo: Both Balázs/pestbuda.hu)

He pointed out that 90 percent of the railway traffic between the eastern and western parts of Hungary, including transit traffic, passes over the Danube Bridge, the southern connecting railway. Thanks to the renovation and capacity expansion, the bridge will be able to reliably serve rail passenger and goods transport in the coming decades, he emphasized.

The state secretary recalled: 106 years ago, in 1916, the railway company stated in its development strategy that more capacity was needed instead of the double-track bridge, and since then the plans included increasing the capacity at one of the most important Hungarian railway crossings on the Danube. (We wrote about the history of the bridge in detail here in Pestbuda)

Based on the government's decision, the National Infrastructure Development (NIF) Zrt. concluded the construction contract with Duna Aszfalt in 2019, he explained. 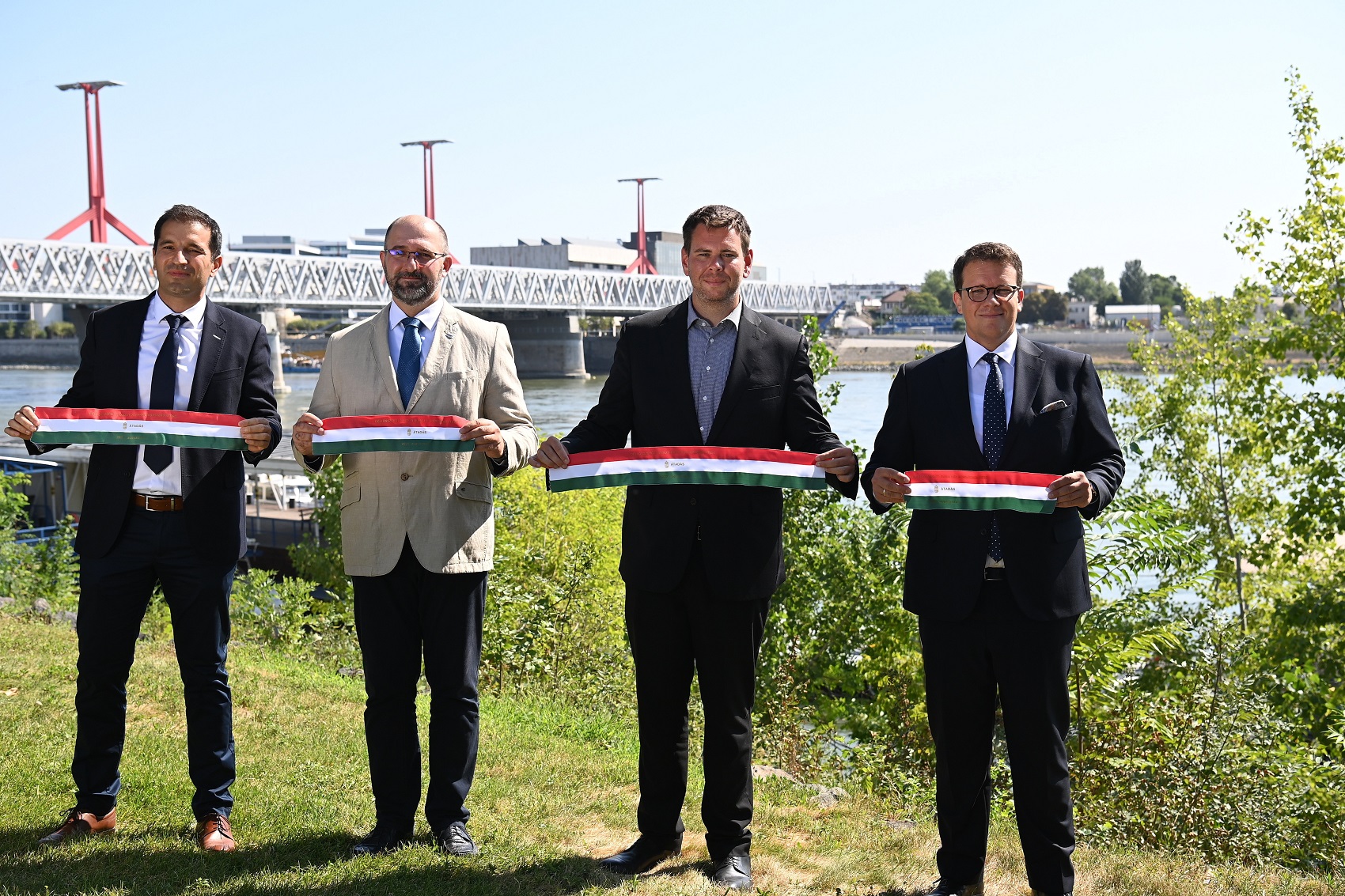 Dávid Vitézy also touched on the fact that, in addition to the three-track bridge, the necessary capacities will also be built on the connecting sections, NIF Zrt. has recently concluded the construction contract for the construction of the southern circular railway. In this way, the railway line will be extended to the Népliget on the Pest side, and to Kelenföld on the Buda side.

The increase in capacity contributes to the fact that freight trains can pass through the section more reliably with less waiting time, and also to the fact that they do not have to travel at night, when they disturb the residents. In addition, passenger traffic may increase.

The state secretary announced: the investment was completed on time and within the budget set in 2019, the works only affected one track at a time, so railway traffic could be maintained during the construction period.

The original bridge in the second half of the 1870s (Photo: Fortepan/Budapest Capital Archives. Archive reference: HU.BFL.XV.19.d.1.05.152)

Zoltán Pafféri, the president and CEO of MÁV Zrt., reminded: Since 1877, for 145 years, there has been a permanent railway connection between Southern Pest and Southern Buda, Hungary's first Danube railway bridge stood on the site of the renovated bridge.

150 passenger and 100 freight trains cross the approximately 500-meter-long bridge every day, 2.8 million passengers used it last year, and 1.7 million people have traveled across it so far this year, said the president and CEO.

Zoltán Pafféri also spoke about the fact that new noise and vibration dampening technologies were used during construction. The flexible rail attachment, the noise-shielding wall, and the special polymer bridge plates were all installed in order to reduce the noise load.

Artúr Kikina, the railway development director of NIF Zrt., said: the parts of the three steel structures were manufactured in Poland, transported by road to Hungary, and the assembly and painting took place in Budapest. In Csepel, it was assembled from twenty-meter pieces into 80-90-meter floating units, which were lifted into place from ships. More than forty thousand screws and tens of kilometers of welding seams were used during construction. He indicated: this is the first bridge structure to receive a complete monitoring system.

According to the information of NIF Zrt., the investment was realized with a net amount of HUF 36 billion, the total weight of the 510-meter-long bridges is 8,478 tons, during the work, 3.23 kilometers of track were rebuilt and noise protection walls were created on 500 meters.