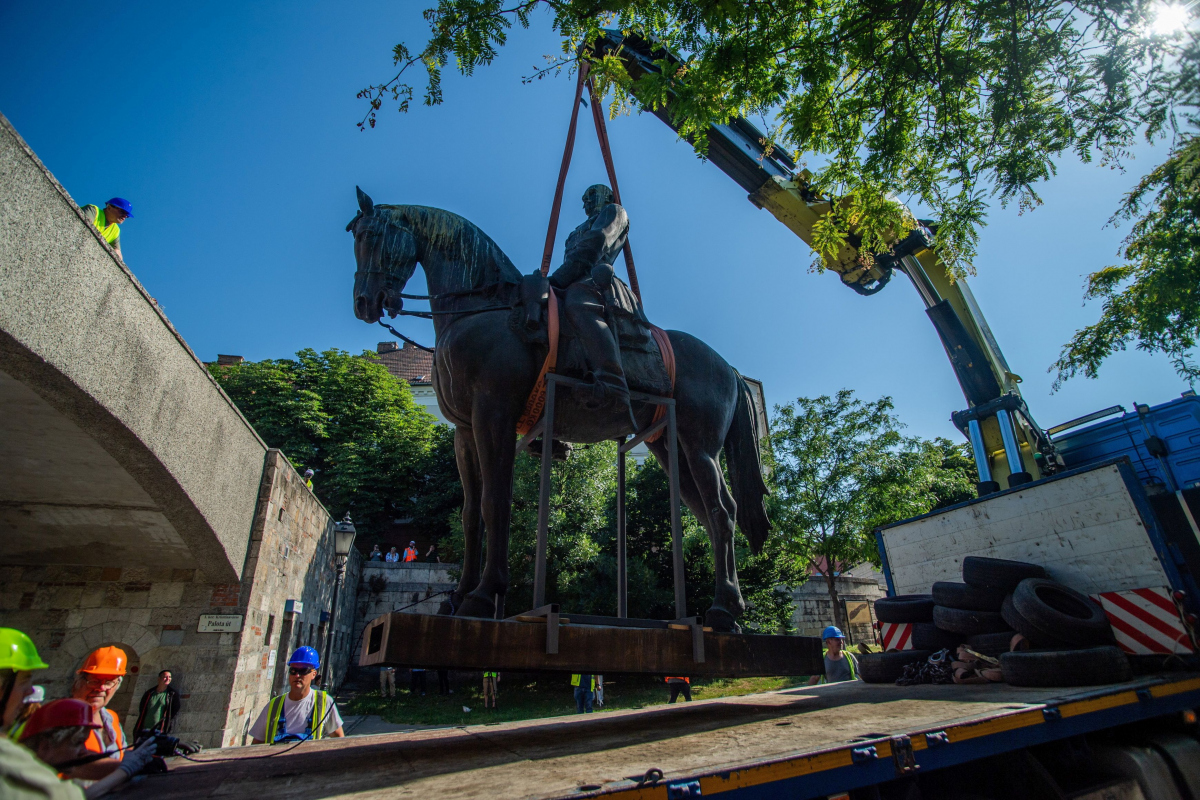 The Fehérvár Roundel is being rebuilt

The reconstruction of the Fehérvár Roundel in Buda Castle and the renovation of the surrounding castle walls has started. During the works, the equestrian statue of General Artúr Görgei was transported to be restored. It will be returned to the walls in its former glory.

As part of the National Hauszmann Program, the reconstruction of the Fehérvár Roundel and the renovation of the surrounding castle walls has begun, Várkapitányság has told the MTI. According to expert studies, the structure of the fortification on the western side of the Buda Castle has become unsafe. As a result, its walls cannot be repaired. Thus, during the renovation, the walls of the roundel, built in the 1950s, are first to be completely demolished and then rebuilt.

Prior to the start of the reconstruction, archeological excavations were carried out at the Fehérvár Roundel (Photo: Várkapitányság / Kárász Karolina)

A statement from Várkapitányság recalls that the works were preceded by careful preparation, archaeological excavations and geophysical surveys, and the demolition of the roundel will also take place under archaeological observation, during which the fortification will be excavated. The stone material of the current bastion will be used during the construction works -Várkapitányság has emphasised. -

Render of the rebuilt Fehérvár roundel, according to the plans, the previously closed section of the western castle wall will also be opened (Source: Várkapitányság)

The renewed roundel will also fit aesthetically into the surrounding castle walls. During the renovation, care will be taken to ensure that the entire length of the castle walls becomes walkable in the Buda Palace Quarter. Therefore, after the reconstruction of the Fehérvár Roundel and the Archduke Joseph's palace, visitors can walk along the hitherto closed section of the western castle wall, all the way to the Csikós Courtyard.

In addition to the reconstruction of the Roundel, the equestrian statue of General Artúr Görgei is also being restored. The statue by László Marton Jr was inspired by the statue by György Vastagh that was destroyed during World War II. It has been standing on the Fehérvár Roundel since 1998.

The Görgei statue was lifted off its pedestal by crane (Photo: MTI / Zoltán Balogh)

The completely restored Görgei statue will be put back in place after the completion of the Fehérvár Roundel (Photo: MTI / Zoltán Balogh)

Interestingly, the pedestal of the statue gives his name in its original form as Görgey. However, after sympathising with the goals of the 1848 revolution, the general replaced the y (which often refers to noble lineage in Hungarian names) with an i. As a result, he is increasingly known as Görgei.

Cover photo: The equestrian statue of Artúr Görgei was removed from the Fehérvár Roundel in Buda Castle to be restored (Photo: MTI / Zoltán Balogh)