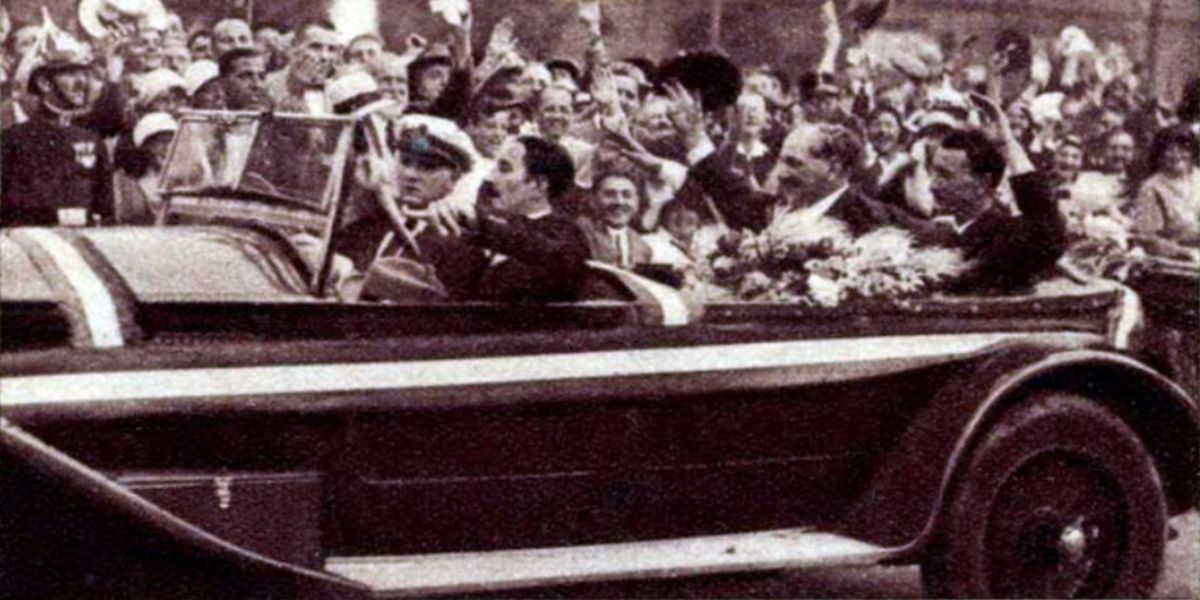 The people of Budapest did not line up many times to celebrate the heroic deed of the Hungarians on the street. Funerals were unfortunately, more common, but 90 years ago the opportunity was given to celebrate the Hungarians as a hero in a street parade. Namely, György Endresz and Sándor Magyar, who flew across the Atlantic Ocean breaking three world records.

The Hungarian transatlantic flight took place between 15-16 July 1931. Flying over the ocean was still a real sensation at that time, moreover, the Hungarian pilots wanted to draw attention to the injustice of the Trianon peace treaty, which is why their plane was called “Justice for Hungary”. The flight was also supported by Lord Rothermere, a believer of Hungarian revision demands, with $ 10,000, and he proposed the name.

They were the fifteenth to fly across the Atlantic Ocean, but their flight meant much more than that, breaking three world records: the fastest to reach the Irish coast, the farthest of the transatlantic planes flying in the European continent, and the 5,770-kilometre journey was completed faster than anyone, in 25 hours and 20 minutes. They were unable to land in Mátyásföld in front of the ten thousand people waiting for them for technical reasons, they had to make a forced landing in the border of Felcsút. 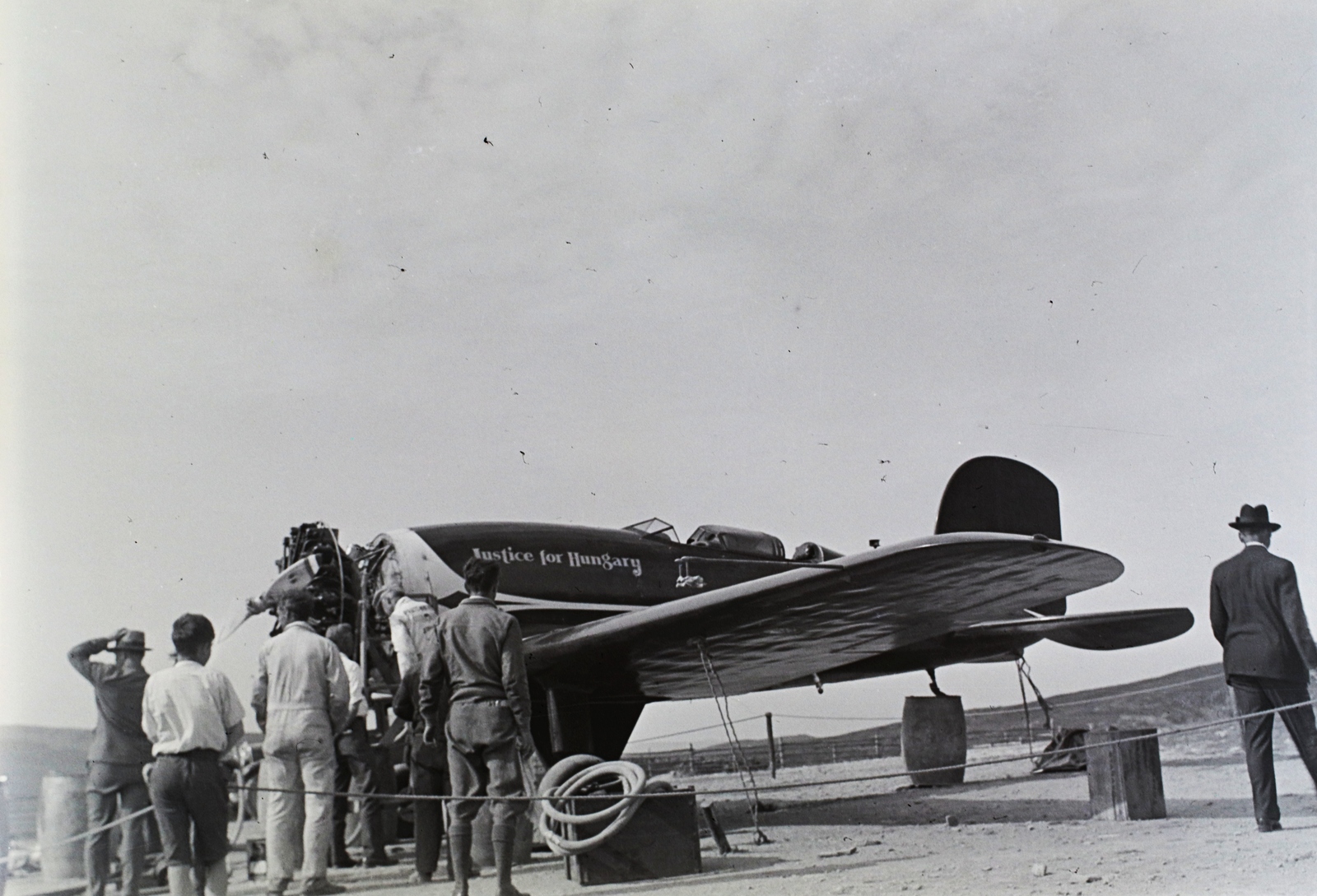 The two transatlantic pilots were therefore considered heroes and were received accordingly in Budapest. As the Ujság wrote on 21 July 1931:

“The two heroes, the Hungarian transatlantic pilots, György Endresz and Sándor Magyar, as well as the patron of the transatlantic flight, Emil Szalay, were given a worthy ceremony by the audience of the capital on Monday afternoon. Already in the early afternoon, the streets of Budapest were full of curious people and where the cars of György Endresz and Sándor Magyar had to march, thousands and thousands were standing to see the two Hungarian heroes for at least a moment.”

But how did the notable parade take place? The cars taking part in the march, which were decorated with a red-white-green “Justice for Hungary” ribbon and national flags, gathered on Gellért Square around half past four on 20 July. Pilot György Endresz and navigator Sándor Magyar were waited by an open Lancia car covered with red-white-green draperies and laurel wreaths. The line of cars left around six o'clock on the Ferenc József (Szabadság) Bridge - Vámház Boulevard - Kálvin Square - Múzeum Boulevard - Károly Király Road (Károly Boulevard) - Vilmos Császár (Bajcsy-Zsilinszky) Road - Andrássy Road route, the final destination was Heroes' Square. The parade was described in the article already quoted:

“In the back seat of the car, Sándor Magyar and György Endresz sat in grey clothes, without hats, and Emil Szalay took the seat between them. Wherever the line of cars passed, the cheers were heard, which became frantic when the pilots' decorated cars appeared in front of the audience. The passengers of the car returned the enthusiastic applause of the audience with waves, and the caravan reached the millennium memorial without any interruption.”

The whole route was decked in flags, waiting for the marchers, and of course, there was a huge crowd everywhere on the side of the road, the police could barely hold back the curious. Many watched the parade from the rooftops. 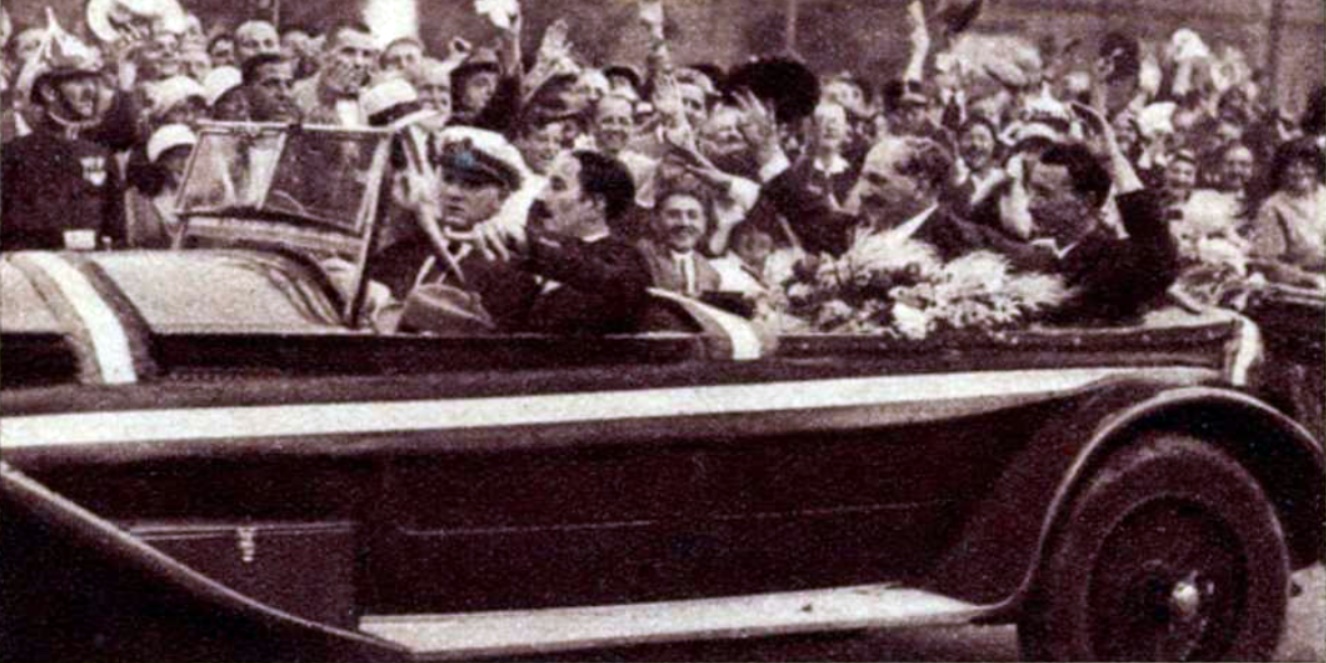 The decorated car and the pilots (Photo: Picture supplement of the Magyarság, 26 July 1931)

The crowd was even greater in the Heroes' Square, only the nobility, foreign ambassadors, members of the government, Archduke Joseph, the mayor, and ecclesiastical dignitaries were allowed to the inside space. Outside this closed area, there was a huge crowd in which not only Hungarians were present, as IBUSZ organised special buses for foreign tourists.

In Heroes' Square, after the anthem was sung, of course, several speeches were made, Minister György Lukács on behalf of the organising National Committee, and Kunó Klebelsberg on behalf of the government greeted Endresz and Magyar. Afterwards, Mayor György Ripka and several other dignitaries greeted the pilots, as well as Imre Kleics, who travelled from Endresz's birthplace, Perjámos (today's Periam, Romania) to greet the pilots on behalf of the hometown.

Of course, the Hungarian Aeronautical Association also paid homage in the sky with three sport aircraft, and then a Fokker F.VIIIB aircraft manufactured in Hungary, the H-MNFC-registered, 12-passenger plane flew over the crowd.

Endresz was rushed after the speeches by autograph seekers who would have given anything for the pilot’s signature, and even some specific deals took place, some who paid great money for a signature to someone willing to sell the autograph they obtained. At the end of the ceremony, the crowd sang the Apostles' Creed, and then in a little hurry, because a storm was about to break out over Heroes' Square - the thunder was already heard - the convoy returned to Gellért Square within the row wall of the celebrating crowd. 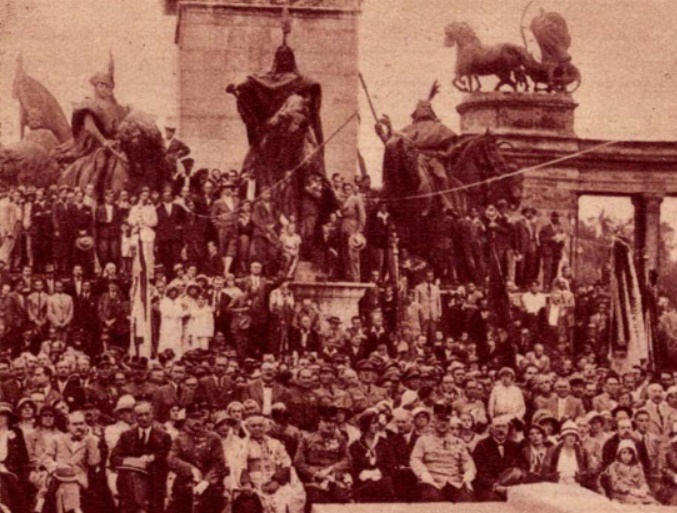 Huge crowd in the Heroes' Square (Photo: Picture supplement of the Magyarság, 26 July 1931)

György Endresz kept giving his autographs, waving during the all-day celebration - the governor received and rewarded them in the morning. He was ill, suffered from migraines and even had a fever in the evening.

On this day, Budapest could experience a real celebration of joy, with all its paraphernalia, marching celebrities who waved from the car, speeches of nobility, so - and this is rare, almost unparalleled among the few similar celebrations in Budapest - that no negative overtones, no bad feelings were directly related to it.