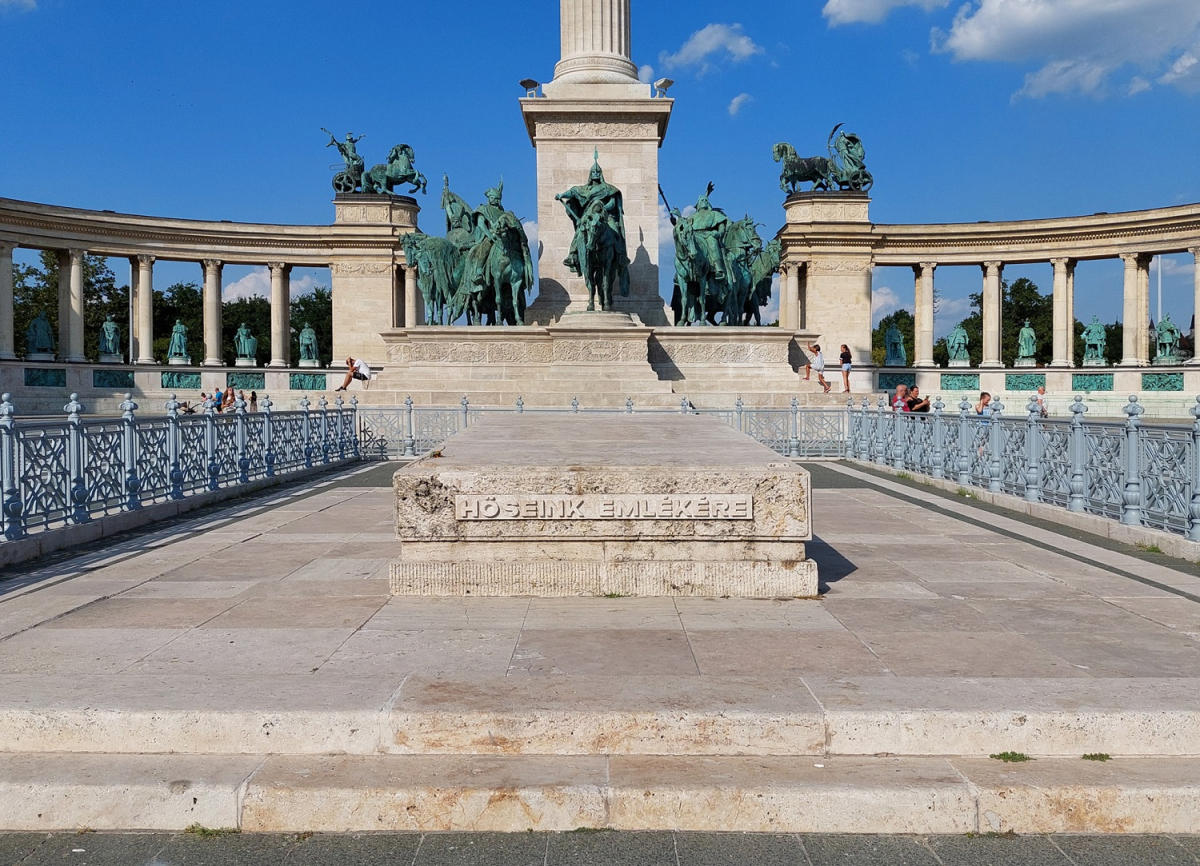 The Memorial Stone of Heroes was torn down 70 years ago

In the shadow of the Millennium Monument, another work is hidden in the Heroes' Square. The Memorial Stone of Heroes symbolises a mass grave, originally erected in 1929, in memory of the soldiers of the First World War resting in anonymous graves, but it was not mourning that was its primary message, but mobilisation against the changing millennial boundaries. The memorial stone was demolished in 1951 but re-erected in the spring of 1956 and then in 2001, in a different form and with new messages.

The Millennium Monument in Heroes' Square in Budapest embodies the memory of the nation's millennial history. Its name refers to the thousandth anniversary of the Conquest, but its creation began after the millennium celebrations of 1896 and took more than three decades. The monument, designed by Albert Schickedanz, is lined with the great statesmen of the nation, but the square may have been renamed Heroes' Square in 1932 because of another monument. The Memorial Stone of Heroes was placed in front of the statue of Árpád in 1929. 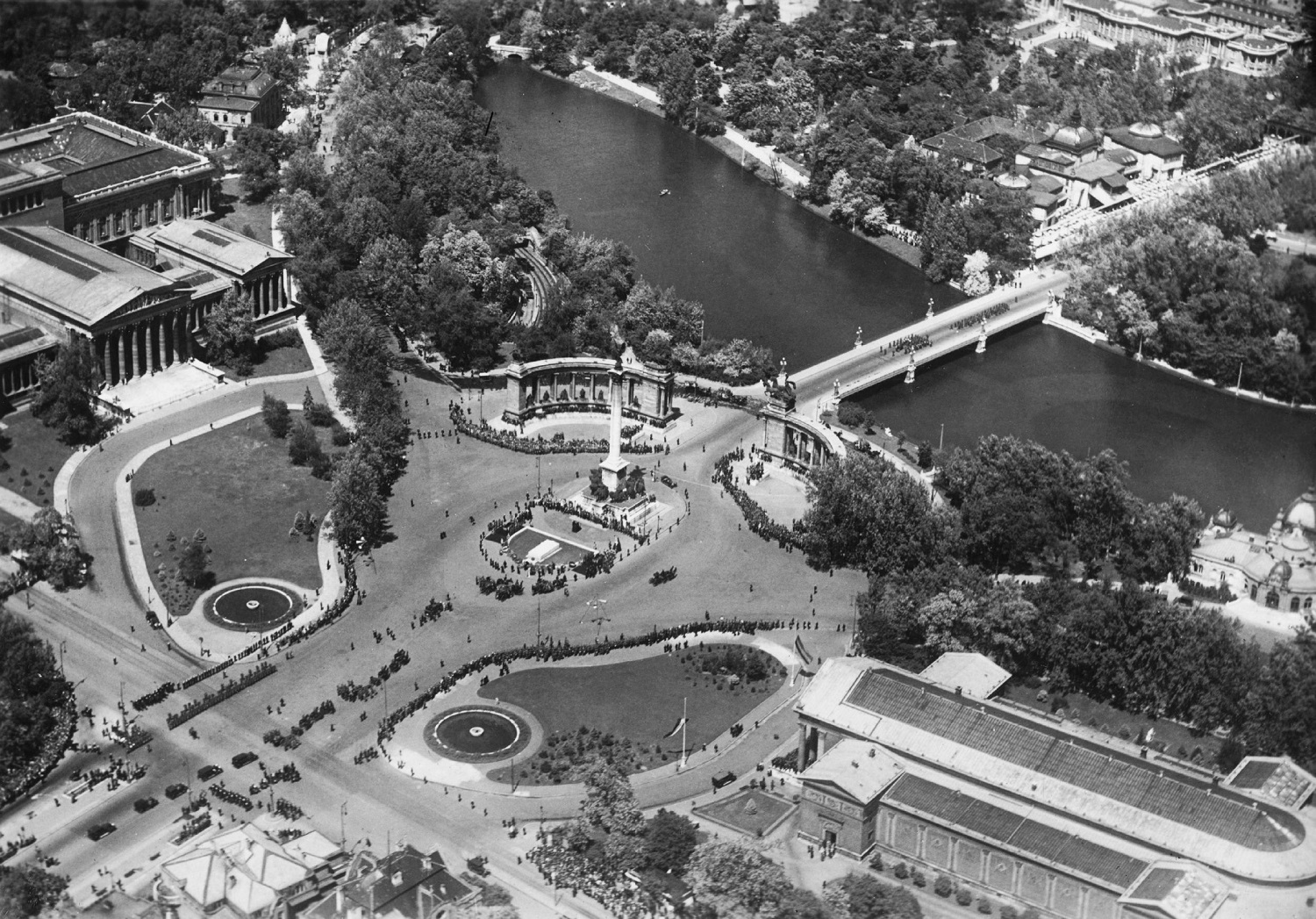 Heroes' Square in a 1935 aerial photo. The Memorial Stone of Heroes in the middle, in front of the Millennium Monument (Photo: Fortepan/No.: 41580)

In 1917, the Parliament passed a law requiring the erection of a monument to local soldiers killed in the First World War in every settlement. After the war, there was also a need to erect a national, central memorial that would have commemorated primarily soldiers resting in anonymous graves. A tender was announced for the design of the monument in 1924, for which 160 entries were received. The winner became the grandiose work of Count Miklós Bánffy, designed for Gellért Hill, but due to the huge costs, its implementation was eventually rejected.

A few years later, in 1927, the issue of the Memorial Stone of Heroes was put back on the agenda. At that time, Minister of Culture Kunó Klebelsberg commissioned the Deputy State Secretary of the Ministry of Religion and Public Education, Róbert Kertész K., to prepare the sketch plans without a tender. The location was clearly defined then in the Heroes' Square, exactly in the area in front of the statue of Árpád. This was allegedly raised by the governor himself, Miklós Horthy because in his opinion this way the heroic past could be symbolically connected with the heroic present.

The plans were then judged by the Fine Arts Council, where it was decided that the memorial stone should be as simple as possible and not compete with the Millennium Monument. Only the simple cross proposed by art historian, archaeologist and Catholic priest, Ottó Szőnyi was approved as decoration, which followed the form of the Tihany sarcophagus of King Andrew I. There was the inscription “1914-1918” on the Andrássy Road side of the monument, and on the opposite side “For the millennial borders” was seen. Based on the approved plans, the construction was entrusted to Jenő Lechner - nephew of Ödön Lechner.

The work progressed slowly because the area in front of the Millennium Monument had to be raised by about 60 centimetres and filled with soil. Incidentally, this was objected to by György Zala, the creator of several statues of the Millennium Monument, because the intervention hid the lowest flight of stairs surrounding the monument, thus changing its overall effect. 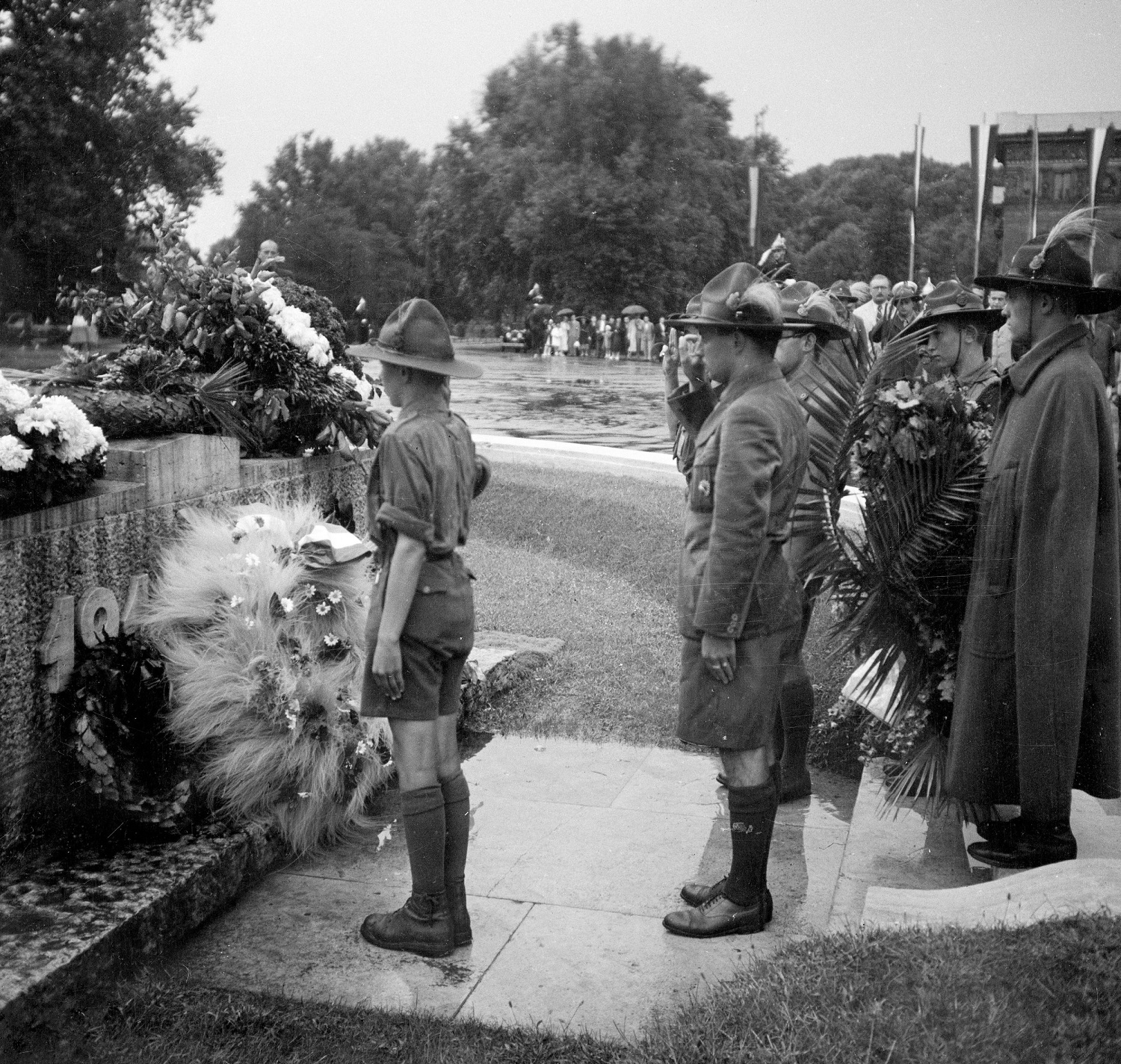 The work was slowed down even by transport difficulties, as the stone block weighed 47 tons. According to Lechner, its transport alone took half a year. The monolithic limestone block originated from the Fabro-mine in Budakalász and had imposing dimensions: it was 6.5 metres long, 3 metres wide and 1.3 metres high. The monument was sunk below ground level and surrounded by a lawn. The square was not paved at that time, it was only paved in preparation for the 1938 World Eucharistic Congress.

The large-scale monument symbolised a mass grave, as its purpose was indeed to remind people of soldiers resting in an unknown place. However, it was not mourning that was its primary message, but it wanted to activate, somehow, it implied the known chant "No, no, never!". 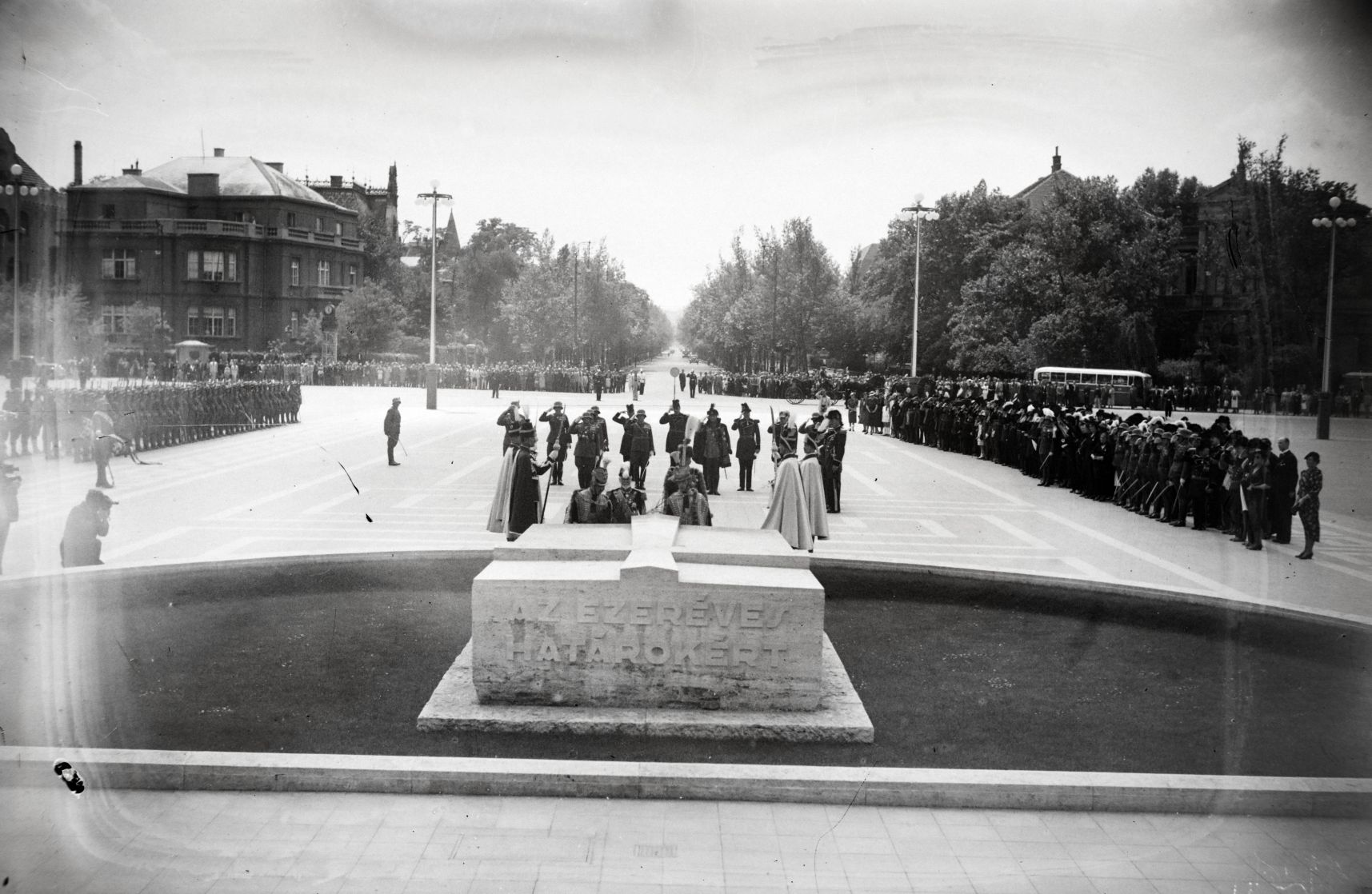 Members of the Sovereign Military Order of Malta wreath the Memorial Stone of Heroes in 1938 on the occasion of the Year of St. Stephen (Source: Fortpepan/No.: 177364)

The Memorial Stone of Heroes was finally inaugurated on 26 May 1929, at the same time as the official handover of the Millennium Monument. However, the art world was divided by the smaller monument, as already mentioned, György Zala himself found it especially offensive that the surroundings of several of his significant sculptures were remodelled without asking him, but he did not consider the stone block itself appropriate either.

Sculptor Ferenc Márton also made plans to remodel it to better fit the Millennium Monument. He would have raised the memorial stone by four metres and would have sunk a loggia lined with black clinker bricks around it into the ground. The loggia would have rhymed with the Millennium Monument through its arcades, but Márton would also have given it a function: he thought it could have a heroic museum in it, and the wreaths could also be placed there during the festivities. However, only a newspaper battle came out of the remodelling of the monument, the plan did not materialise. 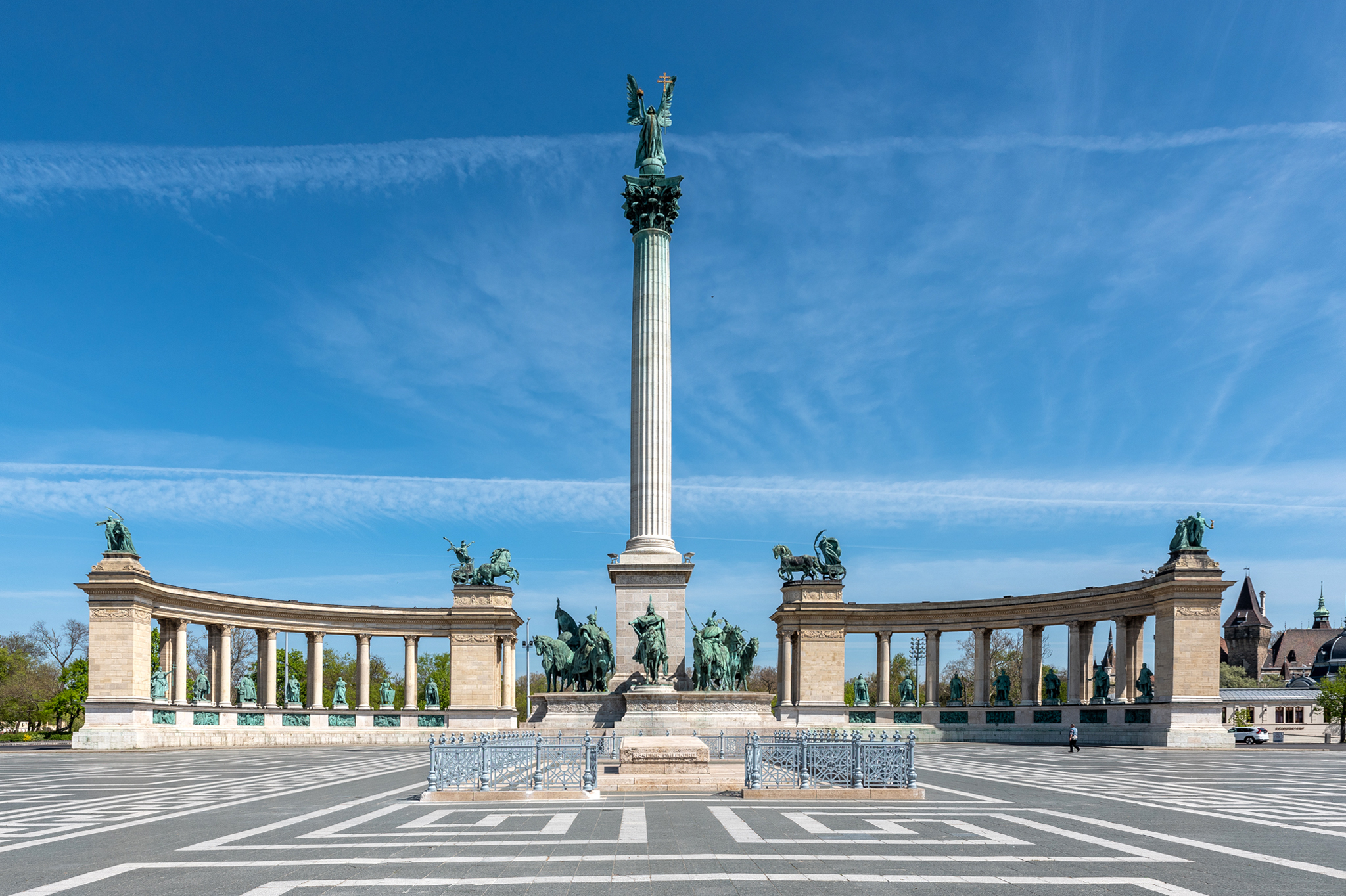 The memorial stone was finally removed from the square in 1951, but not for aesthetic but ideological reasons: the inscription "For the millennial borders" became untenable. In the spring of 1956, another monument was erected in its place according to the plans of Béla Gebhardt, which was inaugurated on 4 April which was considered a holiday. It was similar to its predecessor: it was a huge log, though no longer sunk into the ground, but rested on a smaller foundation and surrounded by a low fence. A carved laurel branch was placed on top and the inscription was added: "To the memory of the heroes who gave their lives for the freedom of our people and our national independence."

The Heroes' Square was completely renovated between 1996 and 2000 when the Memorial Stone of Heroes was replaced as well: the monument still visible today, designed by András Szilágyi, was erected in 2001 as the closing moment of the renovation and was inaugurated on 20 August. In its appearance, it combines the two previous works: an unadorned column, which stands on a low pedestal and is surrounded by a wrought-iron fence, however, an inscription has been placed only on the side facing Andrássy Road: “In memory of our heroes".