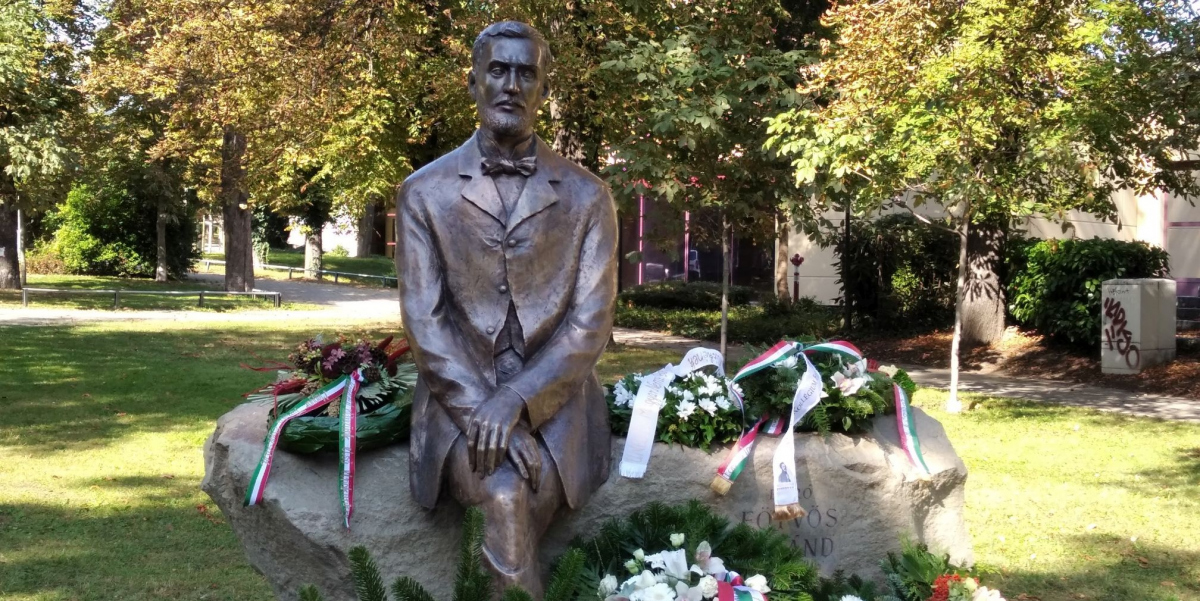 A statue was erected for Loránd Eötvös, who served universal science with a Hungarian heart

One of the most famous Hungarian scientists is immortalised in many reliefs and busts in Budapest, but previously he only had one life-sized statue: it was erected in 2016 in Pest, in front of the central building of the University named after him. Now a new statue has been placed in the Gesztenyés Garden in the 12th District of Buda, and the place is closely connected to him as well: his most famous invention, the torsion pendulum was produced in the predecessor of the Hungarian Optical Works operating next door.

Baron Loránd Eötvös was a member of a long-established and highly educated family, a true Renaissance man, as András Pályi, President of the Eötvös Loránd Geophysical Foundation, put it in his opening speech. His father, József Eötvös, was a writer, a former minister of religion and public education, from whom he inherited a love of literature, he himself delved into the real sciences, but he was also a passionate climber.

His achievements in the field of physics are well illustrated by the fact that after his death Albert Einstein called him the prince of physics - reminded Secretary of State Balázs Fürjes. His aimed to include Hungarian science in the international space, and one of his quotations in his speech has now been added to the pedestal of the statue:

"Only the real science that speaks to the world, and if we want to be true scientists - and as well - good Hungarians, we must raise the flag of science so high that everyone can see it and give it due respect beyond the borders of our country." 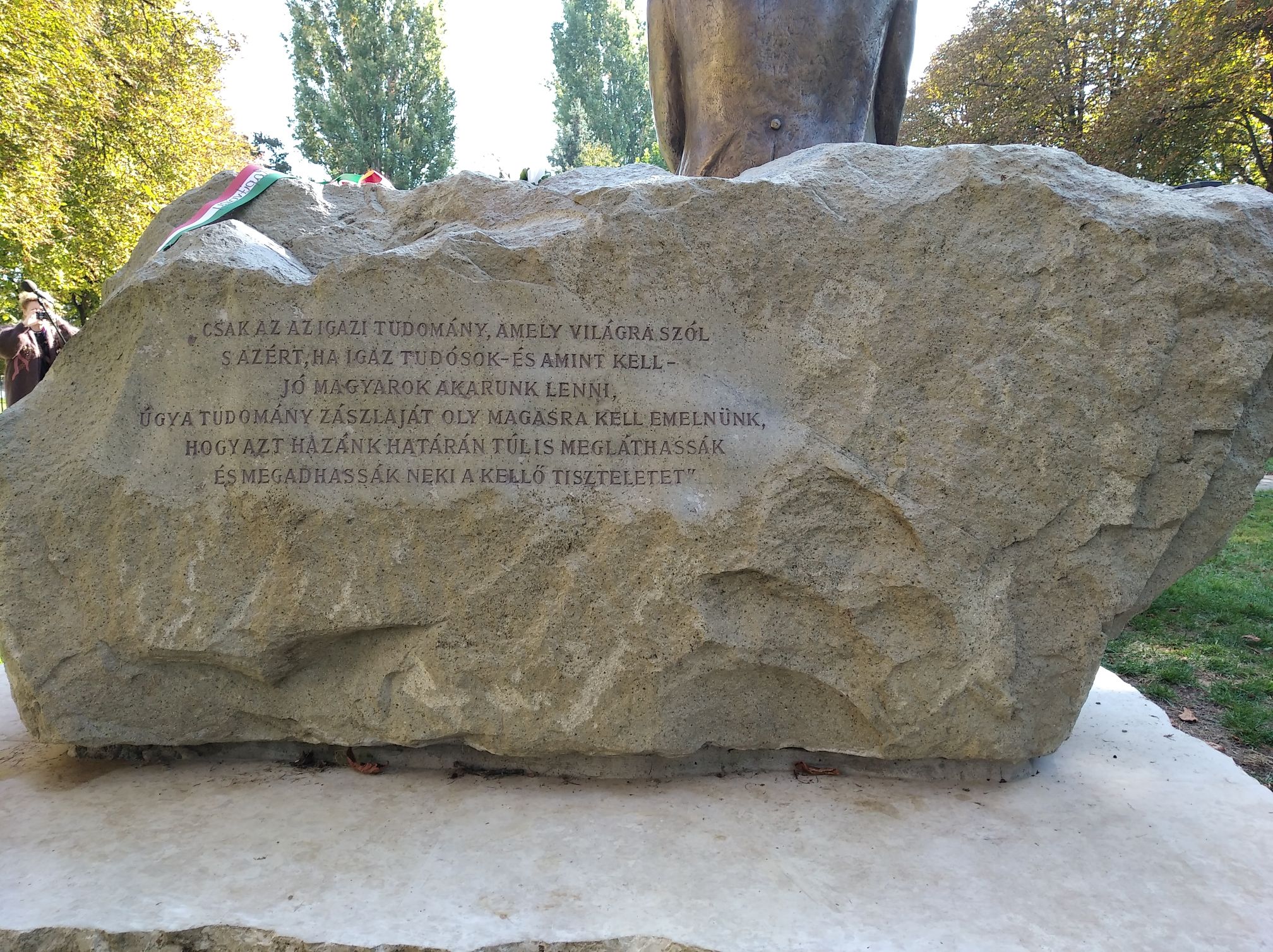 Quote on the pedestal of the statue (Photo: Péter Bodó/pestbuda.hu)

Actor János Papp also read from Eötvös's recollections, which revealed that the idea of a torsion pendulum invented in 1890 was inspired by medieval magic canes, which people hoped to find treasures hidden underground with. The Eötvös Pendulum, on the other hand, functioned much better and became world-famous, so he succeeded in realising his principles and served his homeland in addition to universal science. 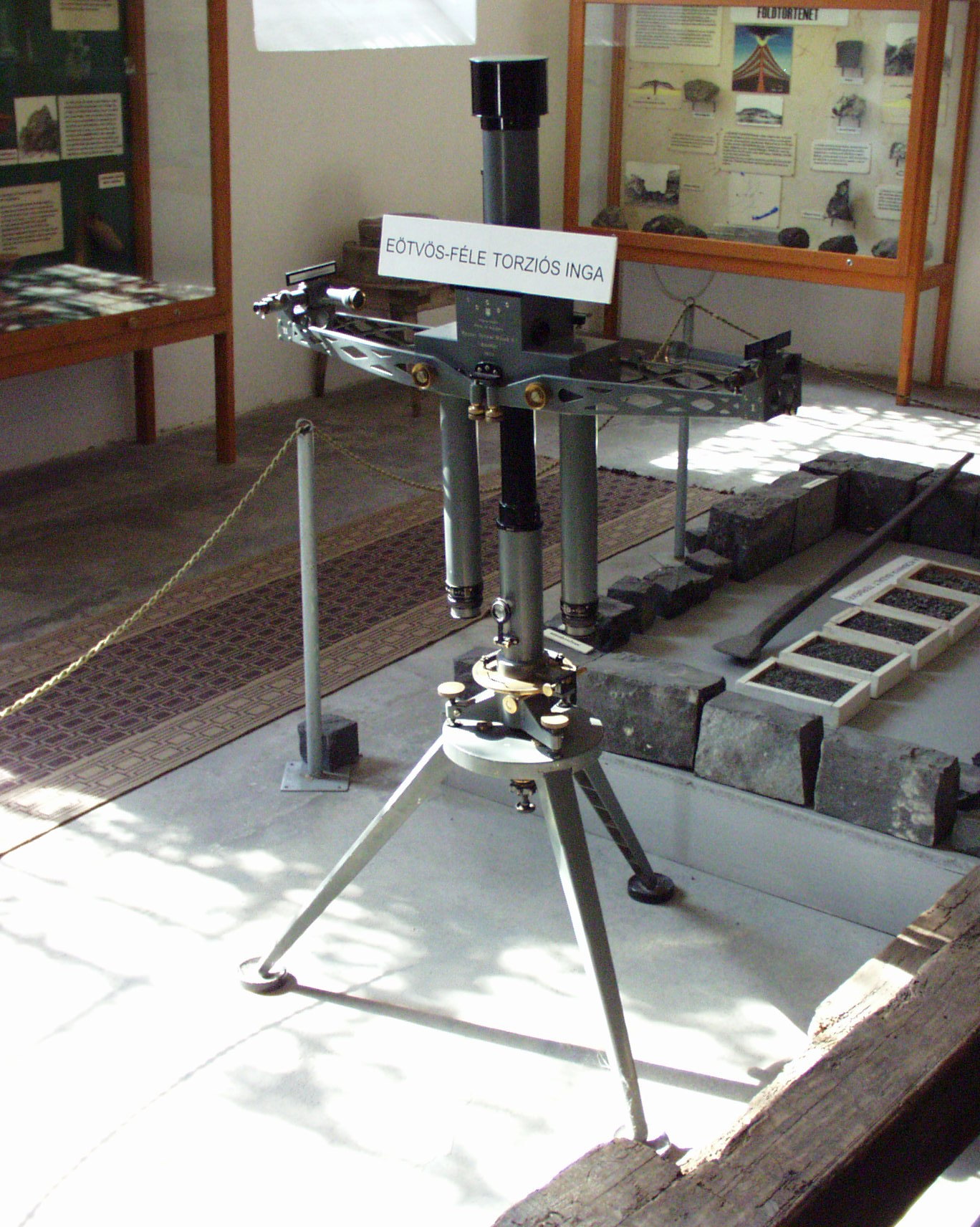 The respect was not lacking either, he was elected president of the Hungarian Academy of Sciences in 1889, but he was also esteemed by posterity: in 1950 the Budapest university, and in 2019 the Eötvös Loránd Research Network (which unites research institutes) were named after him.

However, the statue of the Kossuth Prize-winning artist Tibor Rieger does not depict the scientist, but the man. Beyond the bow tie, his crossed legs and hands radiate intellectuality and he sits on a rock, suggesting his love of hiking. It was more than a hobby for him, as shown by the fact that he was elected president of the Hungarian Carpathian Association and then of the Hungarian Tourist Association. 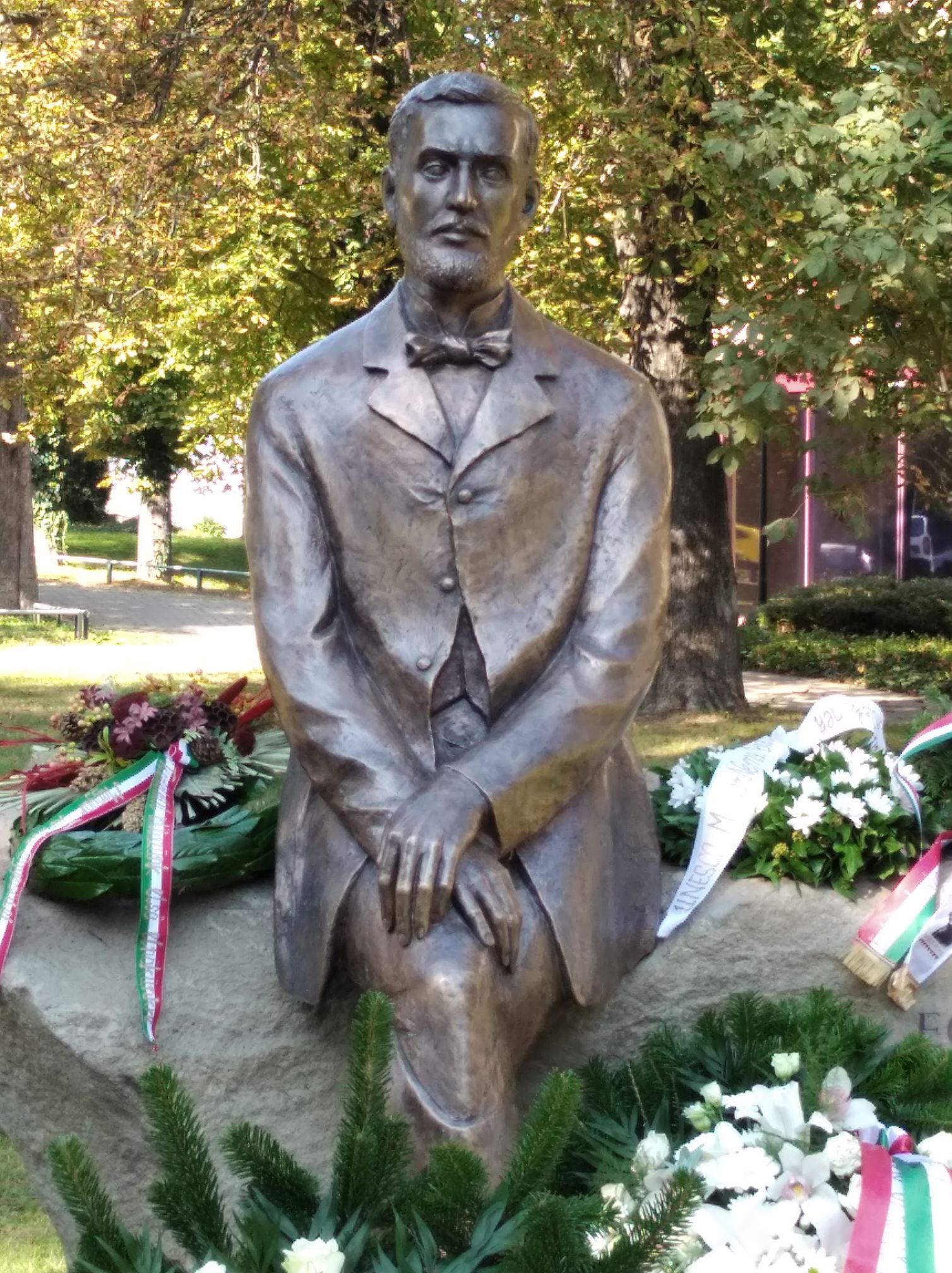 The sculpture depicts the scientist with an intellectual posture (Photo: Péter Bodó/pestbuda.hu) 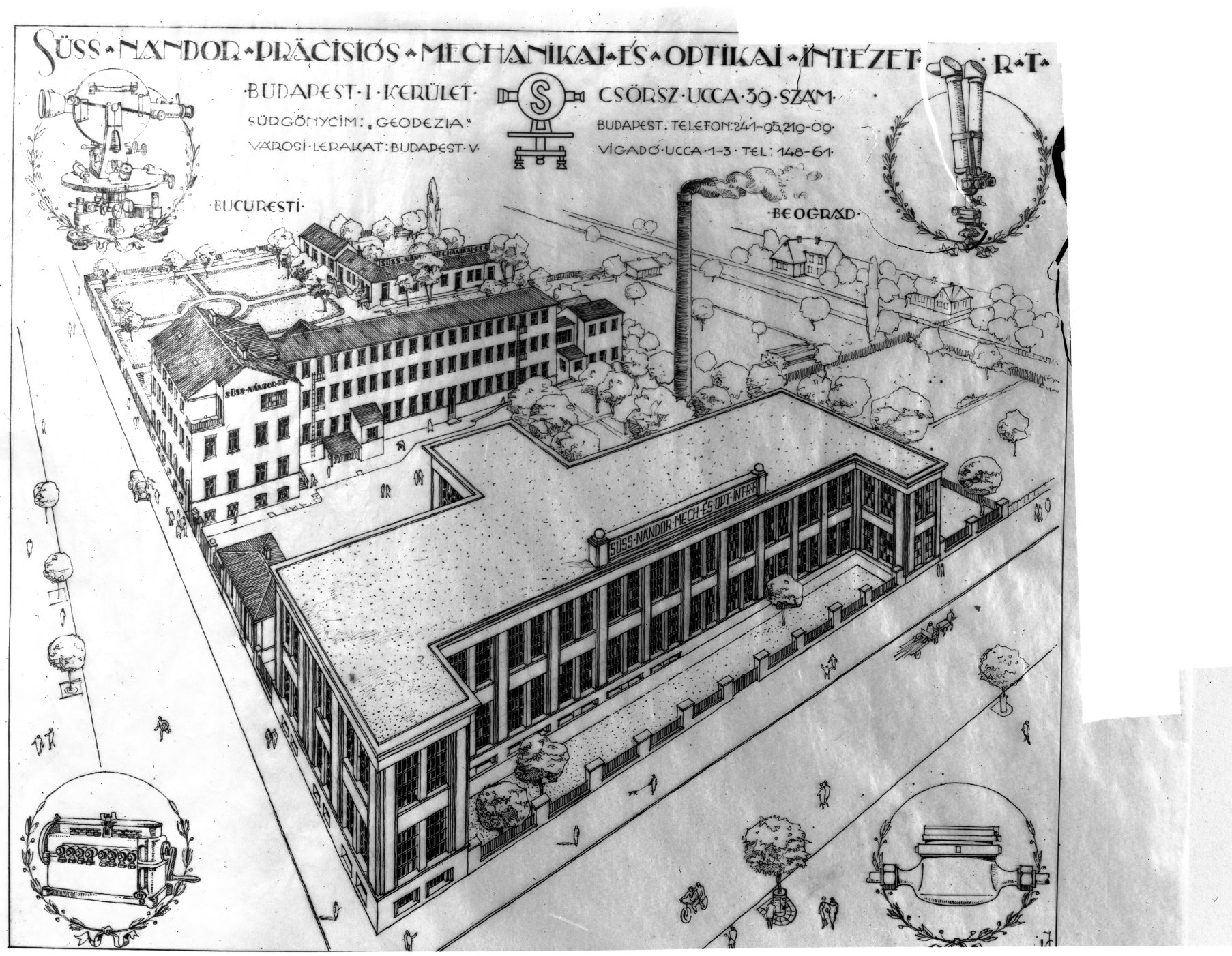 Not only is the statue itself great, but it is also the choice of place for it, as the small park surrounded by chestnut trees next to the busy BAH junction seems idyllic, bringing nature close to man. The place is also suitable because Nándor Süss built his fine mechanics factory not far from here, which produced the torsion pendulum and later became world-famous as Magyar Optikai Művek.

Zoltán Pokorni, the mayor of the 12th District, recalled that a park was established last year on the site of the Olimpia Hotel, which was demolished in Normafa in 2018. Although the building, designed by Zoltán Farkasdy and built between 1971 and 1973, was of very good quality within the socialist framework, it has been out of use in recent decades. 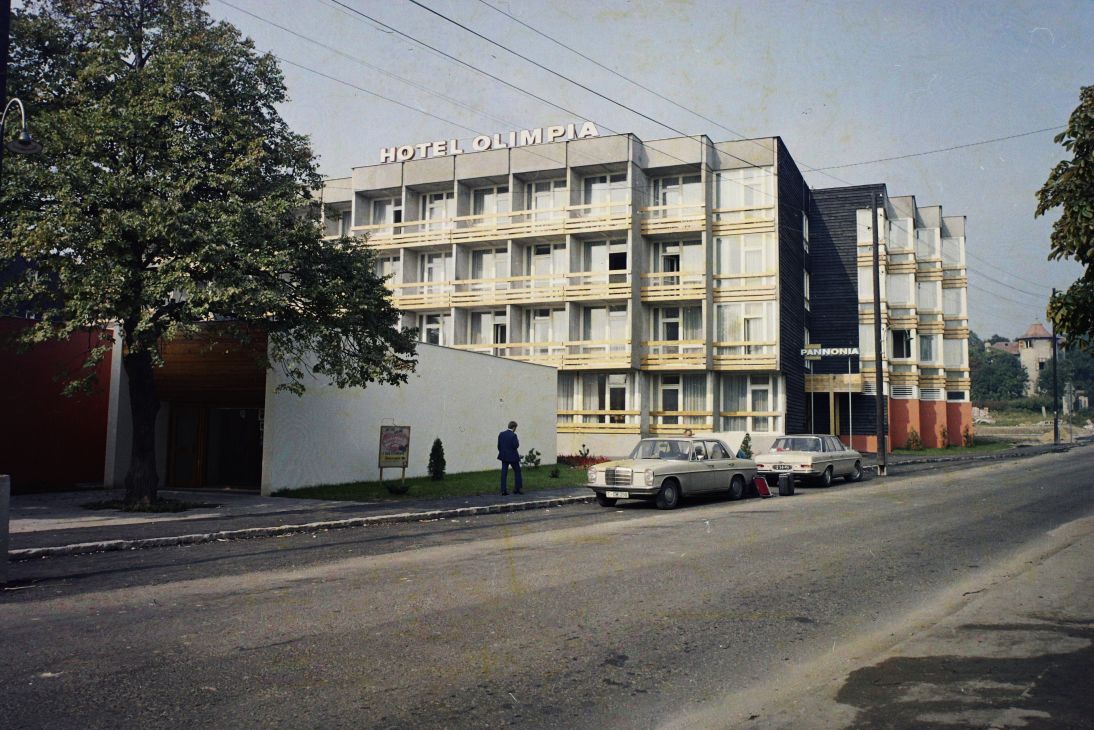 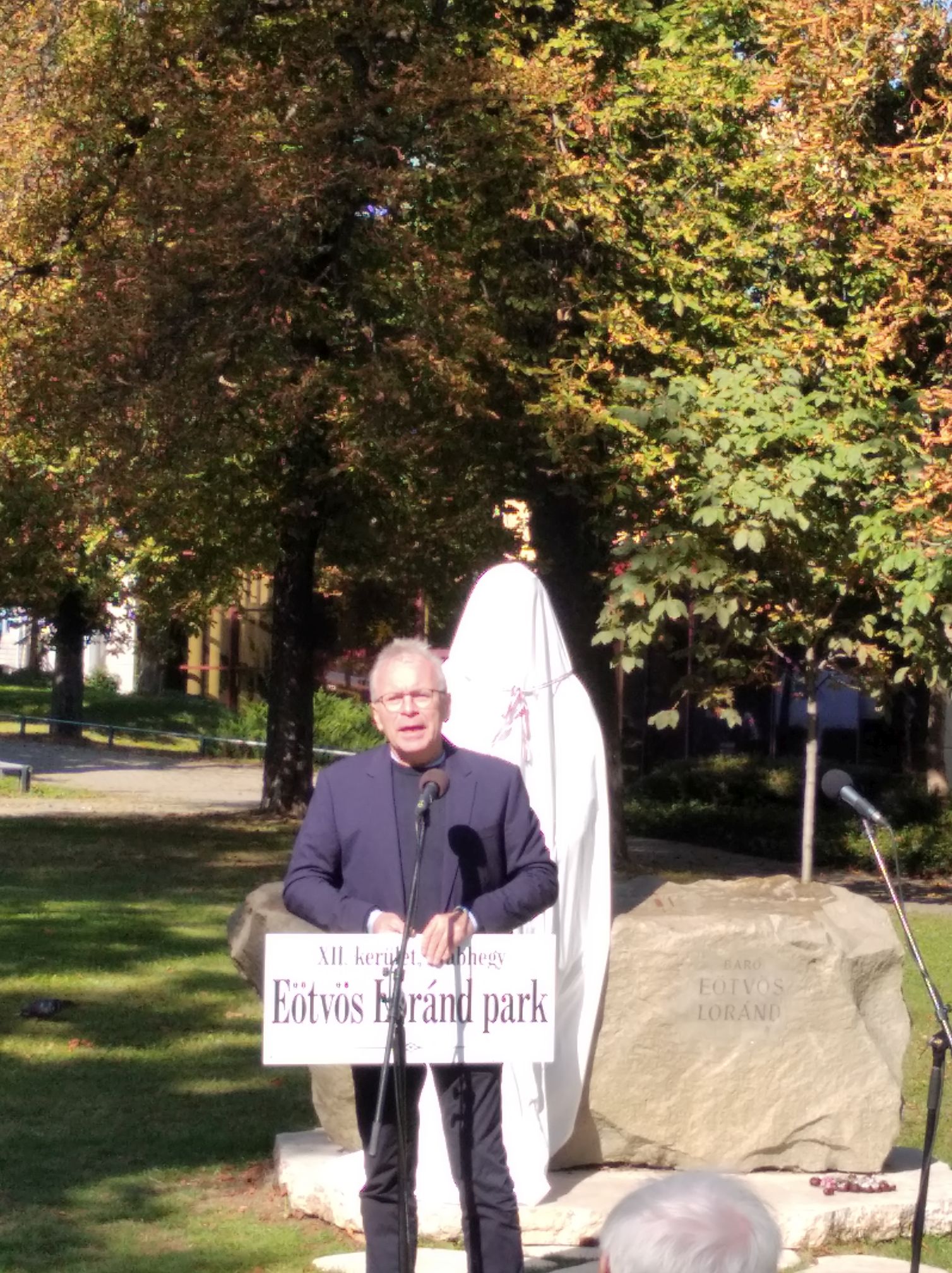 Mayor Zoltán Pokorni with the nameplate of the square

Keeping in mind the wonderful environment, it was a good decision not to build another building on the site, but a park. Incidentally, the municipality called for a name for the square at the end of Eötvös József Road, which was won by Loránd Eötvös, so both famous members of the family are present at Normafa. 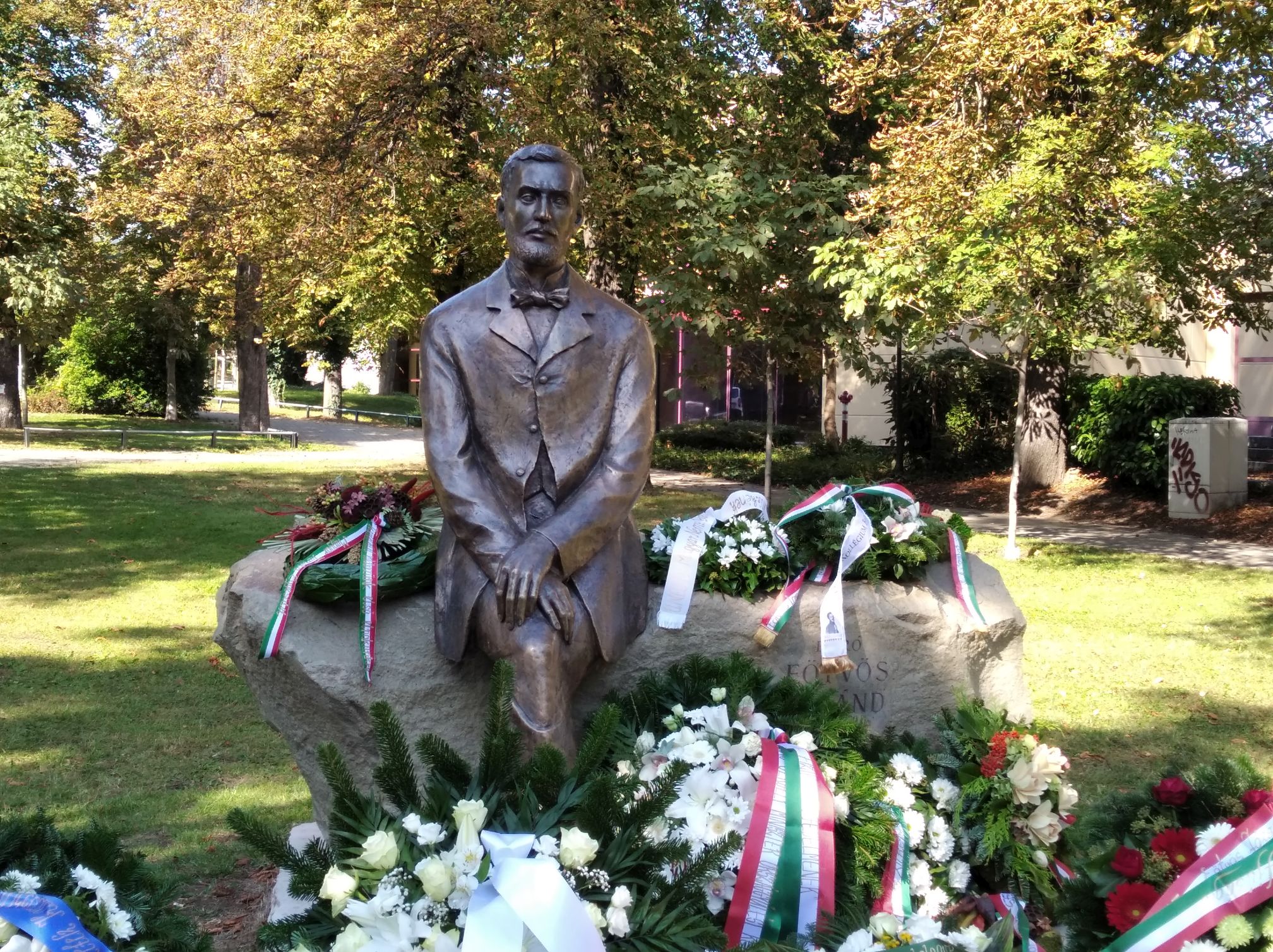 The name of Loránd Eötvös, who served universal science with a Hungarian heart, was picked up by several other associations and institutions, among them the choir of a primary school in Balatonfüred, which performed at the inauguration ceremony the song Message to the Blue Planet. The choice perfectly expressed the personality of Eötvös, who not only loved to see the wonders of the Earth, but also tried to understand them through the eyes of a scientist.

The statue was erected by the Eötvös Loránd Geophysical Foundation with the support of the Ministry of Innovation and Technology and the Hegyvidék Local Council.