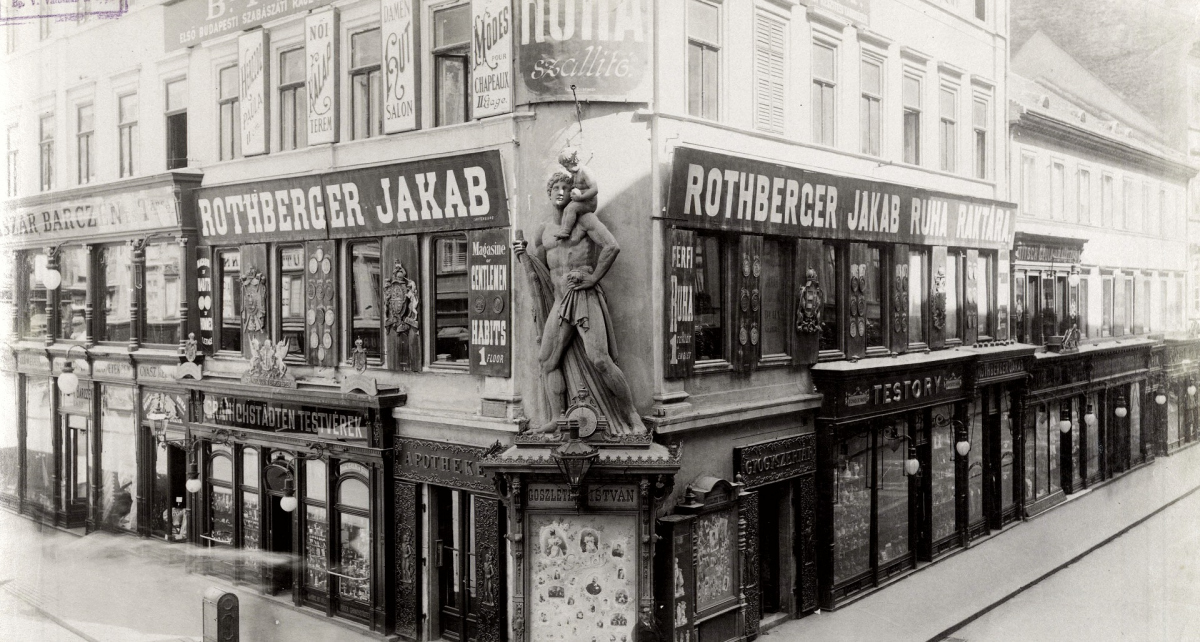 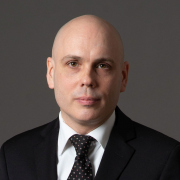 The former house at 6 Váci Street is named after the huge statue of St. Christopher of the pharmacy in it, after which the area in front of the building was called Kristóf Square. However, according to the plans of József Hild, the building, which was expanded to two and then three floors, housed several other shops in addition to the pharmacy, including the fashion store of the clothing retailer Jakab Rothberger, which also won the title of imperial and royal court supplier.

Ignác Schwachhofer was born on 31 March 1757 in Germany, but obtained his diploma in pharmacy in 1785 at the University of Pest. The building that housed the pharmacy was built in 1791 on Váci Street in Pest. This building stood in this form for about four decades. At the beginning of the 1830s, the building was already owned by the renowned obstetrician, a professor at the University of Pest, and in 1841–42 by Rector Ede Flórián Birly (1787–1854), who also ran the brewery, who, with the great Hungarian architect of the 19th century, József Hild, rebuilt the house into two floors.

Whether all this was actually a reconstruction or whether Hild erected a completely new building is, according to a contemporary article in the Vasárnapi Ujság,was also undetectable even by the beginning of the 20th century:

" The old house of Schwachhofer seems to have been rebuilt in 1833 by Professor János Birli [sic], because this year he asked the Pest council for permission for a house to be built by József Hild, which was designed to have two floors." 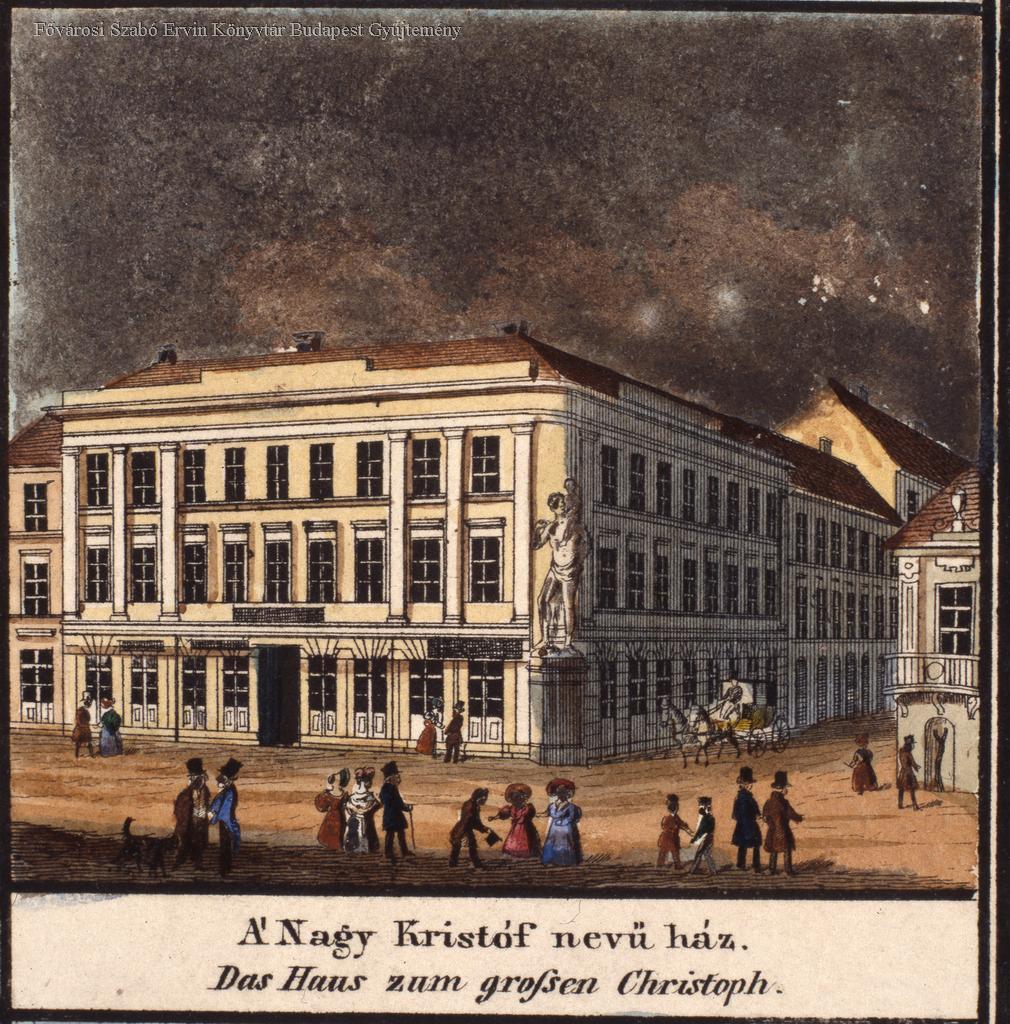 The Nagy Kristóf House in 1837 on the graphics of Carl Vasquez (Source: FSZEK Budapest Collection)

The reconstruction, or the construction of the new house, was completed in 1831 according to the 2nd semester report of the Hazai 's Külföldi Tudósítások of 1831. Birly then made a huge statue of St. Christopher from limestone in 1833 with the sculptor Mihály Bauer.

According to contemporary depictions, this building was two-story even in 1845, while in later depictions, including the photographs of the last third of the 19th century, we can already see a three-storey house. The style of the top floor was exactly the same as the lower levels of the building, so it could easily have been Hild’s work a little later.

The next owner of the Szent Kristóf [St. Christopher's] Pharmacy itself after Ignác Schwachhofer was Schwachhofer's son-in-law, the husband of his daughter Alojzia Wilhelmina, Imre Pregardt, who was born in Kolozsvár [Cluj-Napoca today] in 1787 and died in Pest in 1841. His work is particularly significant for two reasons. On the one hand, he was the first to place the inscription “gyógyszertár" ˙[pharmacy in Hungarian] on his pharmacy, and he used pharmaceutical containers with Hungarian inscription, and on the other hand, homeopathic remedies known in Hungary from the 1820s could be obtained here as well.

The Nagy Kristóf House, which rises above the pharmacy, was a kind of business centre in old Pest from the 1830s, during the 19th century, to the the first decades of the 20th century, based on newspaper advertisements and photographs of the building. By the end of the century, the floor was dominated by Jakab Rothberger’s men clothes storehouse, which also had the inscription “császári és királyi udvari szállító" ["imperial and royal court supplier”] on its richly decorated upstairs portal.

But the most important institution of the building was the pharmacy named after St. Christopher or Christopher the Great [Nagy Kristóf in Hungarian]. Available resources make it difficult to derive its later ownership, but an article in the Pesti Napló of 29 June 1909 named some owners after Ignác Schwahhoffer and János Imre Pregardt, including Viktor Jüttner, Károly Schernhoffer, then Mrs. Károly Schernhoffer, József Fáykiss and the last owner, Norbert Koller. 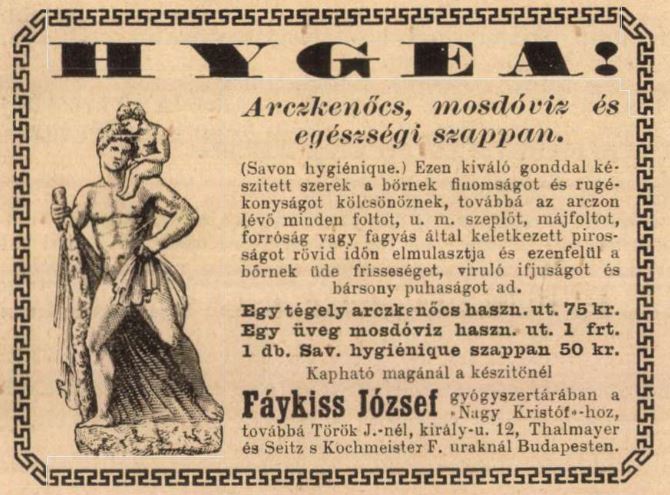 Advertisement in the 14 September 1890 issue of Bolond Istók. At that time József Fáykiss was the owner of the pharmacy

Among them, an interesting innovation is connected to the name of Károly Schernhoffer, which was reported in the 10 April 1855 issue of Divatcsarnok:

" Instead of the easily and often broken bells, Mr. Schernhoffer has set up a telegraph between the premises of his institute and his own room, with the help of which he himself, the assistants in the pharmacy and the individuals working in the kitchen can travel the shortest and safest way."

It was the heyday of telegraph networks, and it also inspired the pharmacist who was receptive to innovation.

In the demolition of the old buildings in the centre of Pest, the three-storey Nagy Kristóf house was also included in a somewhat surprising way. The reason was the regulation of Váci Street and Kristóf Square, during which it was established that the corner part of the building serving as the pedestal of the statue of Nagy Kristóf had already fallen into public territory.

For a while, the area of Kristóf Square was also planned to be built over, here the then owner of the Nagy Kristóf house, the already mentioned clothing merchant, Jakab Rothberger, would have wanted to build, but the capital would have asked him such a high amount of money that he abandoned his plan, and after that, the Budapest Public Works Council finally decided to leave Kristof Square. In contrast, the Nagy Kristóf house was demolished in the late fall of 1909. 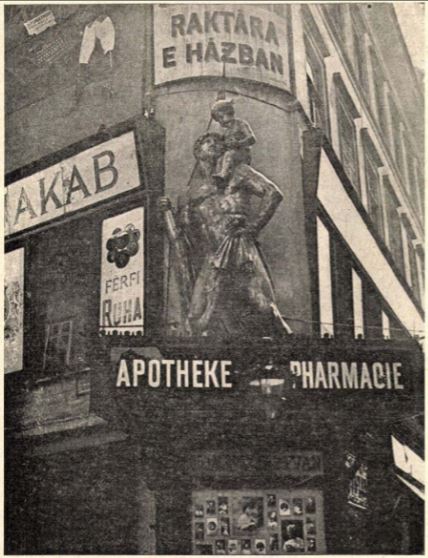 The Nagy Kristóf house with the statue shortly before the demolition of the building from the 4 August 1907 issue of Új Idők. 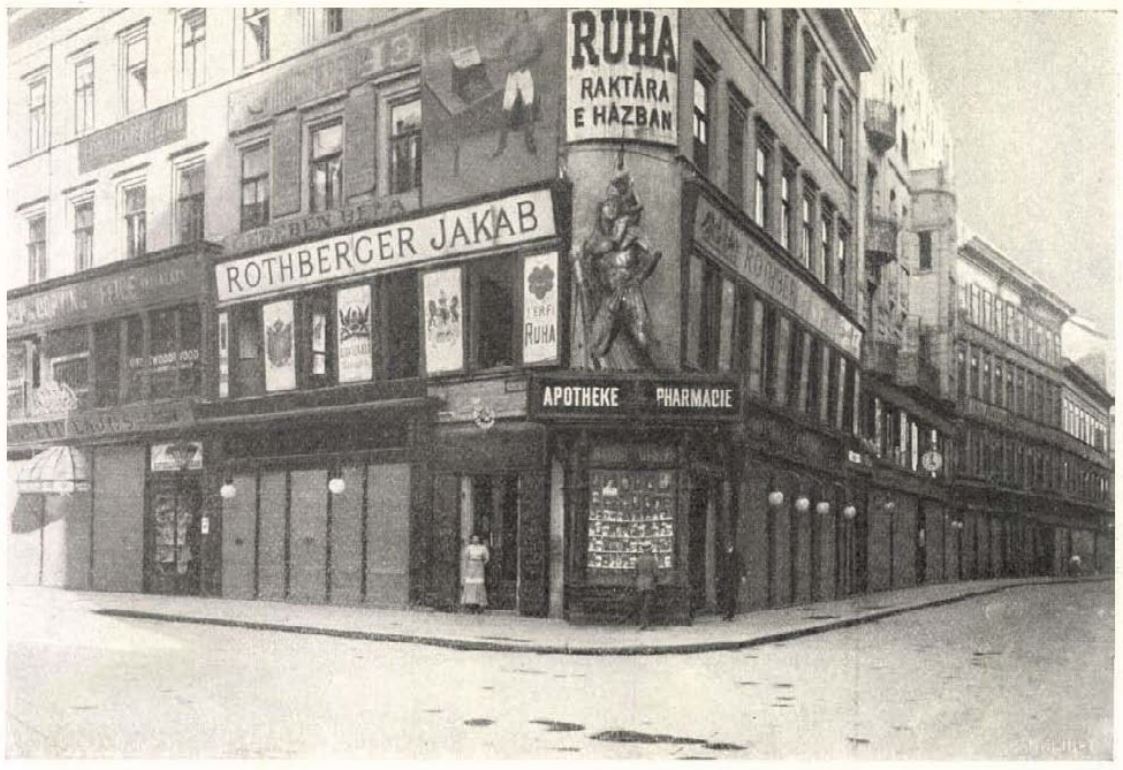 Picture of the Nagy Kristóf house from the 15 August 1909 issue of Vasárnapi Ujság. The Titsch tenement house, built between 1906 and 1909 according to the plans of Ferenc Fazekas, was already standing on the adjacent plot at 8 Váci Street.

The Nagy Kristóf Pharmacy survived the demolition of the building as an institution and later operated at 1 Váci Street. The public was most concerned with the monumental statue on the building, one of the symbols of old Pest. As a result, the statue was saved and erected in the courtyard of the central town hall. The sculpture became popular in its new location as well, although it could be viewed from a completely different perspective when placed on the ground level, but its monumentality prevailed here as well.

The centenary of its creation was also celebrated in 1933, but eleven years later history has finished its fate: during the siege of Budapest, the statue was so badly damaged that only two fragments remained: only the head of St. Christopher and the headless torso of baby Jesus' body. They were transferred to the Kiscelli Museum, and their restoration took place only in 2016 at the Department of Restoration of the Hungarian University of Fine Arts. 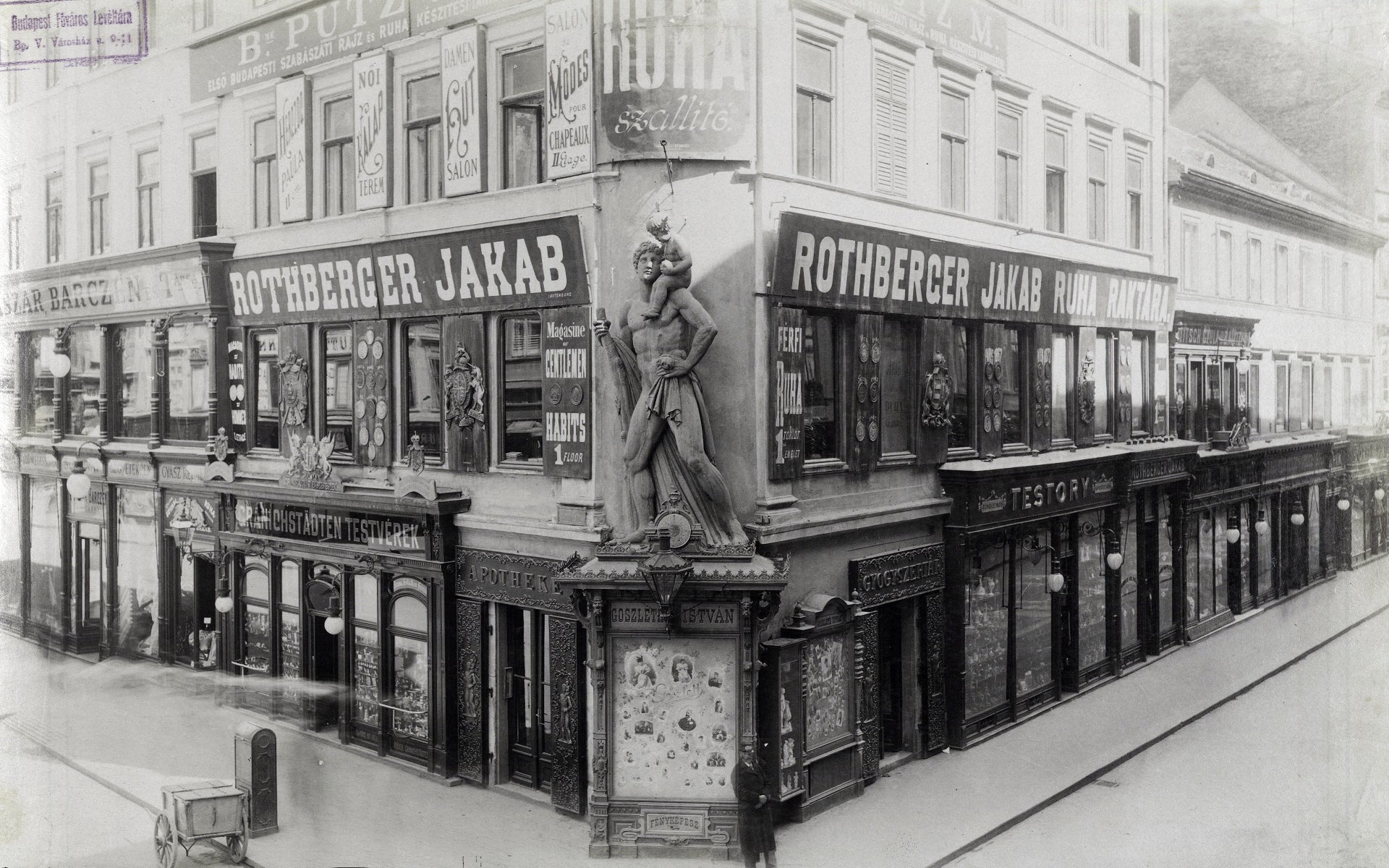 On the site of the Nagy Kristóf house, the old owner, Jakab Rothberger, built the five-storey department store that still stands today, designed by the Viennese architects Ferdinand Fellner and Hermann Helmer.

In 1974, a relief memorial plaque was erected in Kristóf Square to commemorate the namesake of the square, the pharmacy that once stood here. 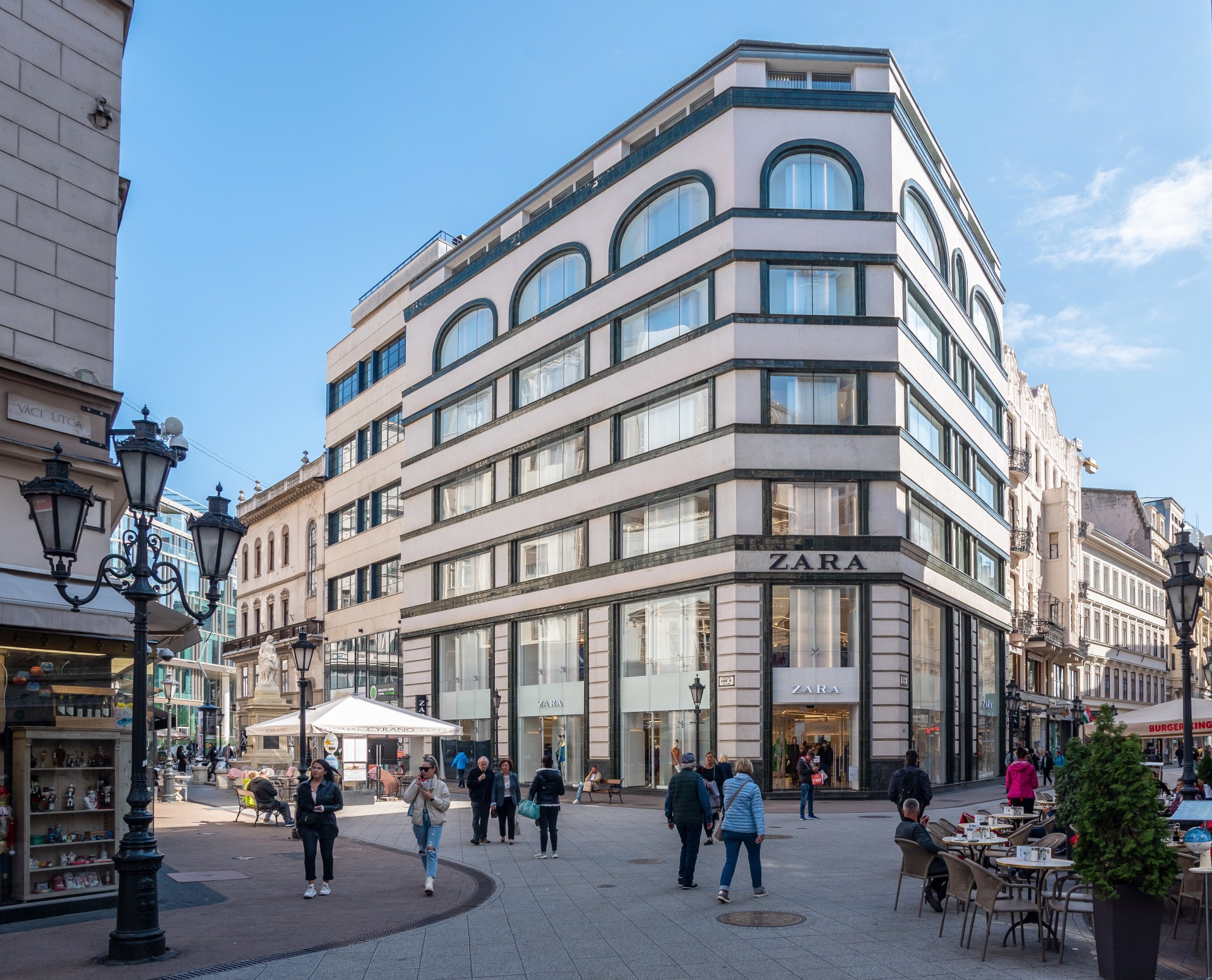 Today, a storehouse stands on the site of the former Nagy Kristóf house (Photo: Balázs Both / pestbuda.hu)

Cover photo: The Nagy Kristóf house and statue, circa 1895, photographed by György Klösz (Photo: Fortepan / No. 82377)