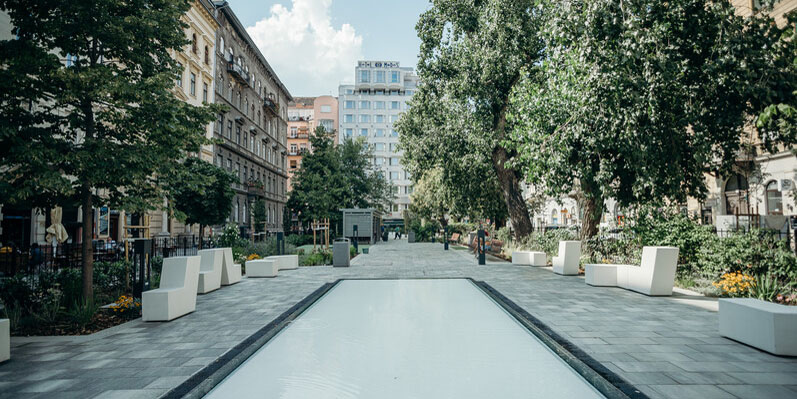 The renovated Jókai square has opened

Hungarian version of the article: Megnyílt a felújított Jókai tér

During the reconstruction, new street furniture was placed on Jókai Square in the 4th district, the green area was renewed, trees were planted, and a fountain was also placed.

The renovated Jókai square was handed over to the 4th district - terezvaros.hu reported about it. The website of the district local council also reveals that the square opened to the public on Saturday, 30 July.

The work began in October last year, with a grant awarded in 2016, which provided HUF 200 million for the renovation of the square. At that time, the local council promised significantly more green areas than before, at the expense of parking spaces. 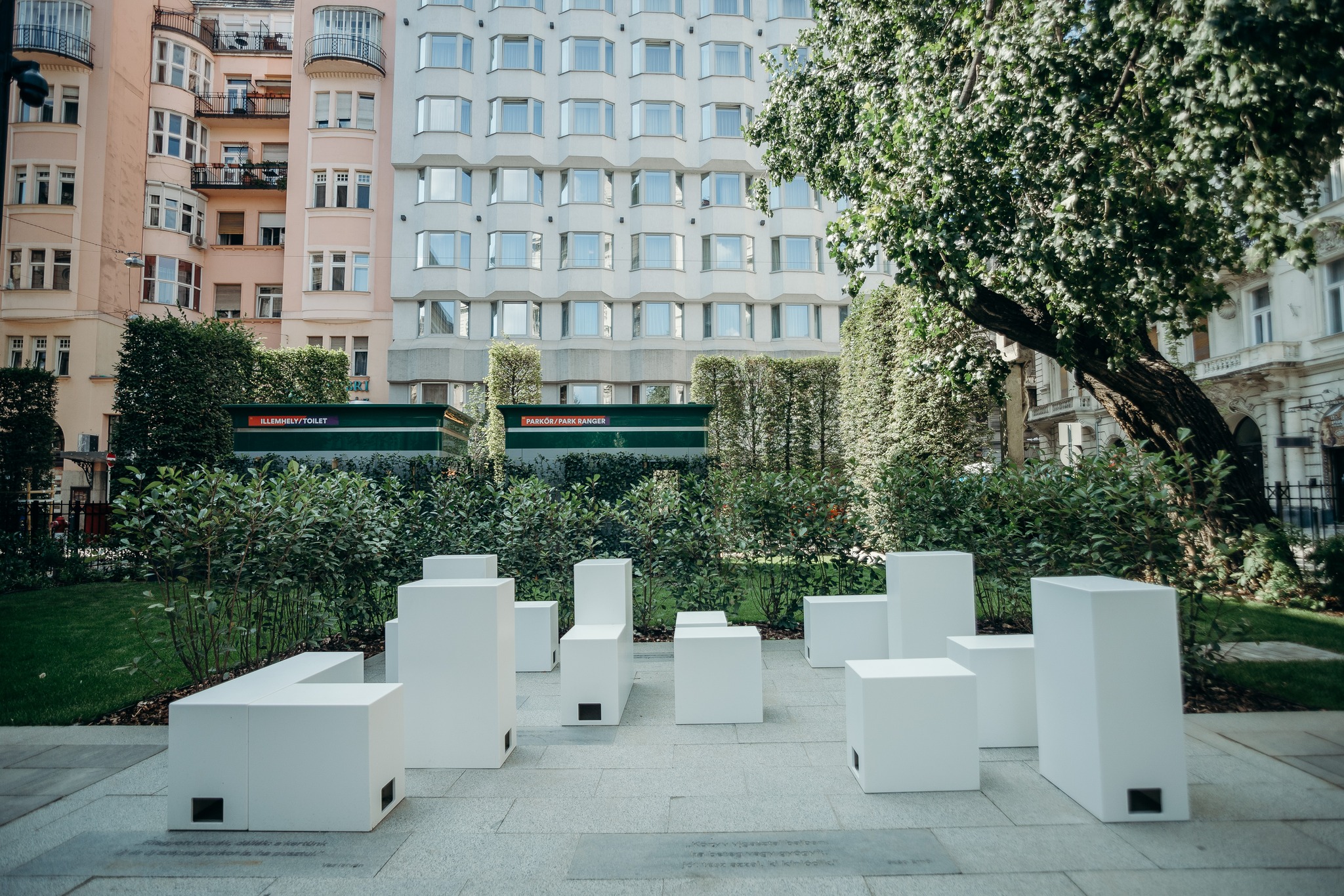 Cube-shaped street furniture was placed on the square, which can be rearranged later (Photo: terezvaros.hu)

When the works started last year, the district local council announced that Jókai Square will be reborn as a space for Hungarian literature. This is demonstrated by the fact that during the transformation, cube-shaped street furniture that can be moved to the square and adapted to later needs was placed, in front of which literary quotations were placed embedded in the paving stones. Literary references were also placed on the basalt concrete wall at the Andrássy road end of the park.

Although it was previously said that the Reading Girls statue, which is now in the Városliget, will be placed next to the statue of Mór Jókai created by Alajos Stróbl - as originally planned - based on the report on terezvaros.hu, it seems that this did not take place, although previously, this solution was also included in the visual plans.

A visual design from last year: next to this statue of Jókai, we can see the statue of the Reading Girls (Source: terezvaros.hu) 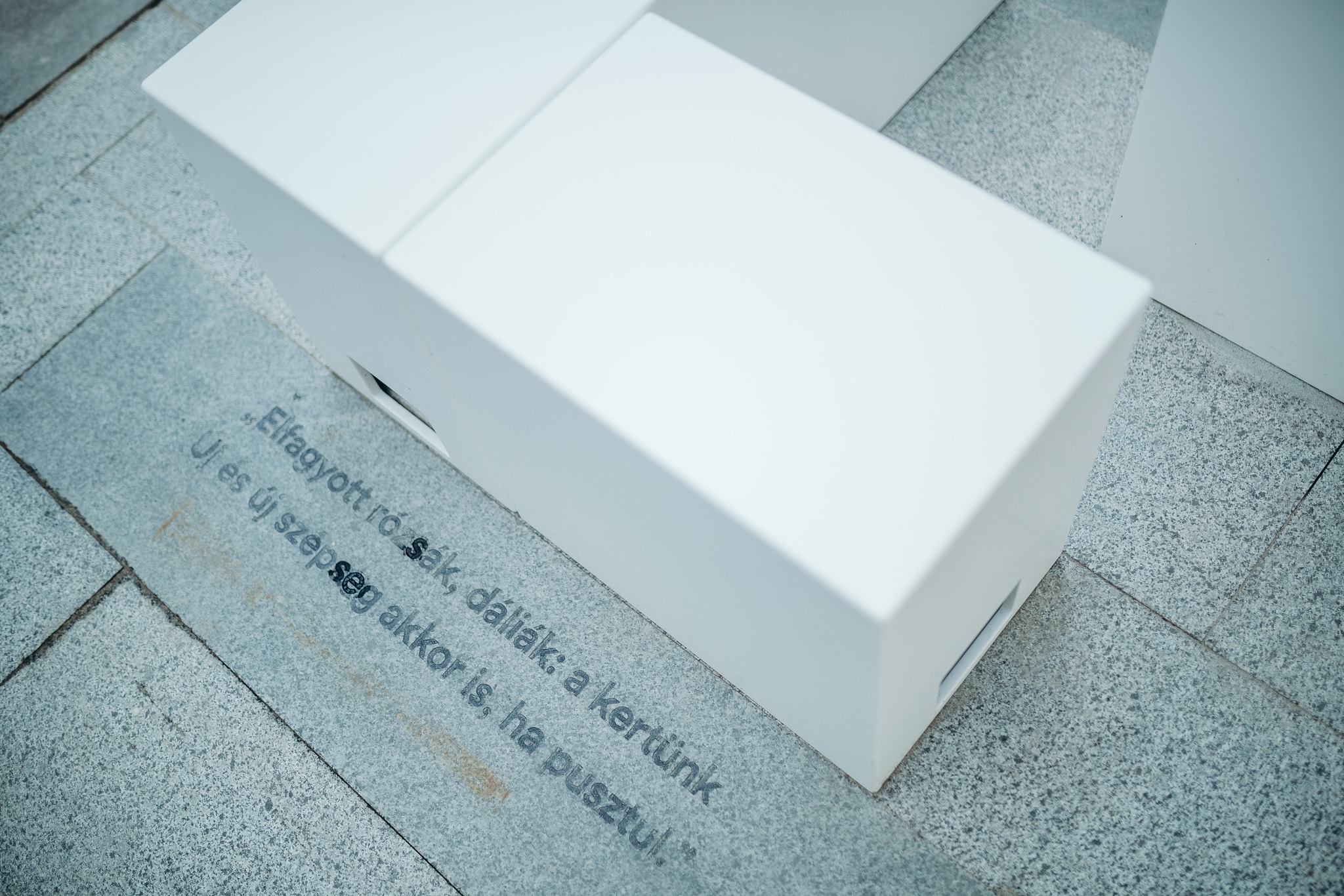 Literary quotations can be read carved into the stone in several places (Photo: terezvaros.hu) 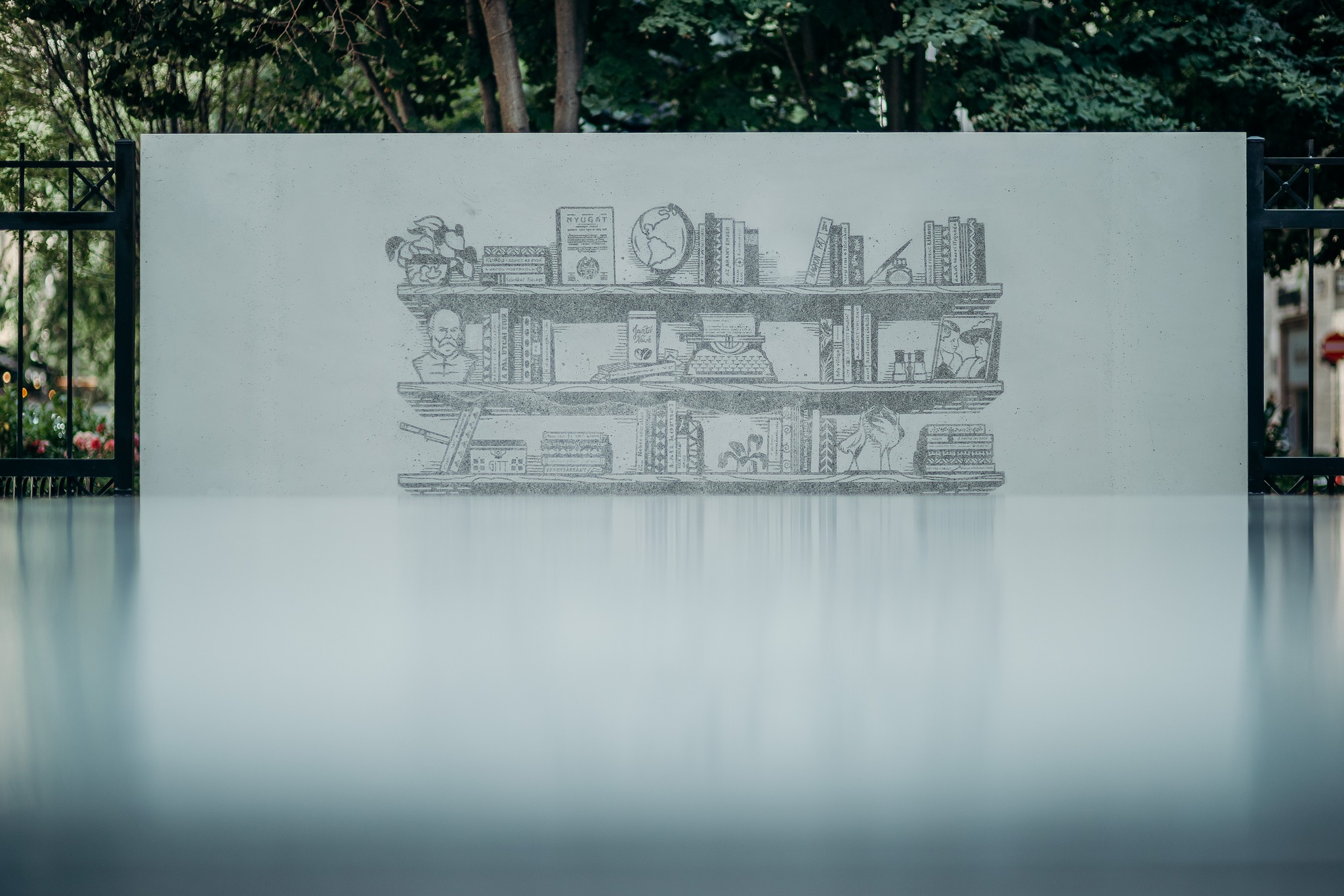 There are also several literary references on the basalt concrete wall at the Andrássy road end of the square (Photo: terezvaros.hu)

The plants in the space have also been renewed: although the individuals of the newly planted row of trees are still saplings, according to the promises, in 10 years they will provide shade with a respectable canopy; in addition, lawns were planted, flowers were planted, a pergola furnished with benches and tables, a splash pad, toys, and a bouncer were set up - the article reveals. 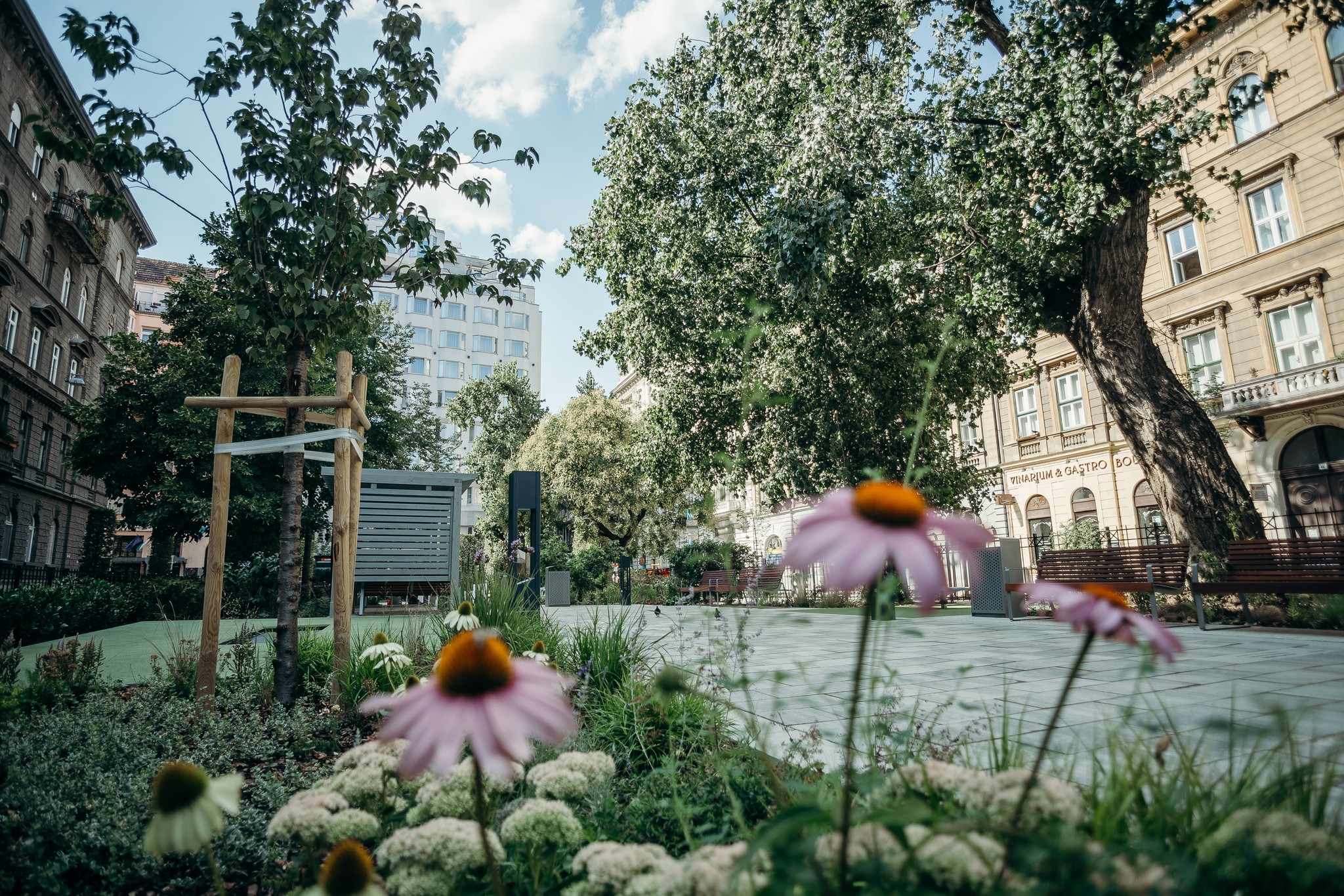 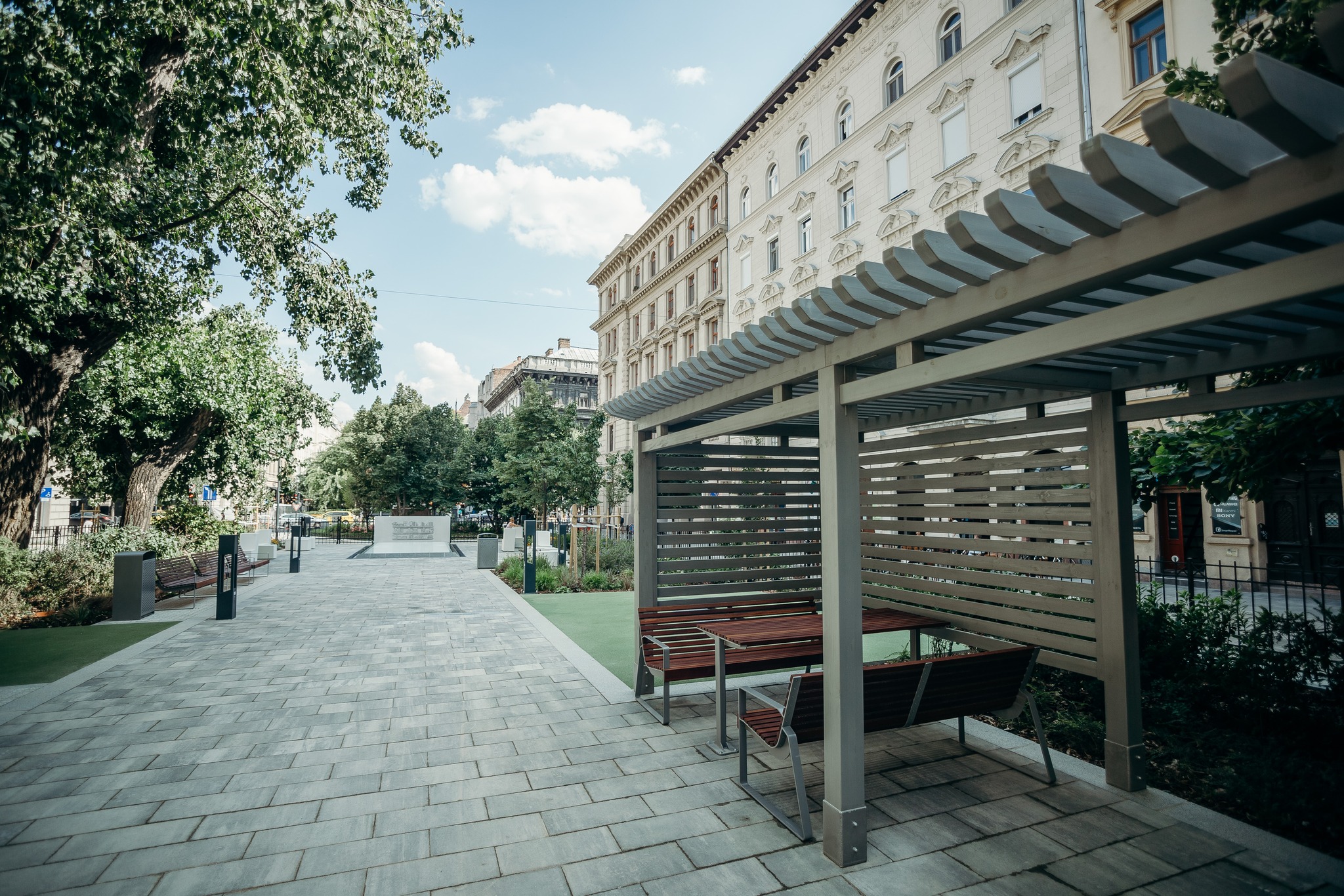 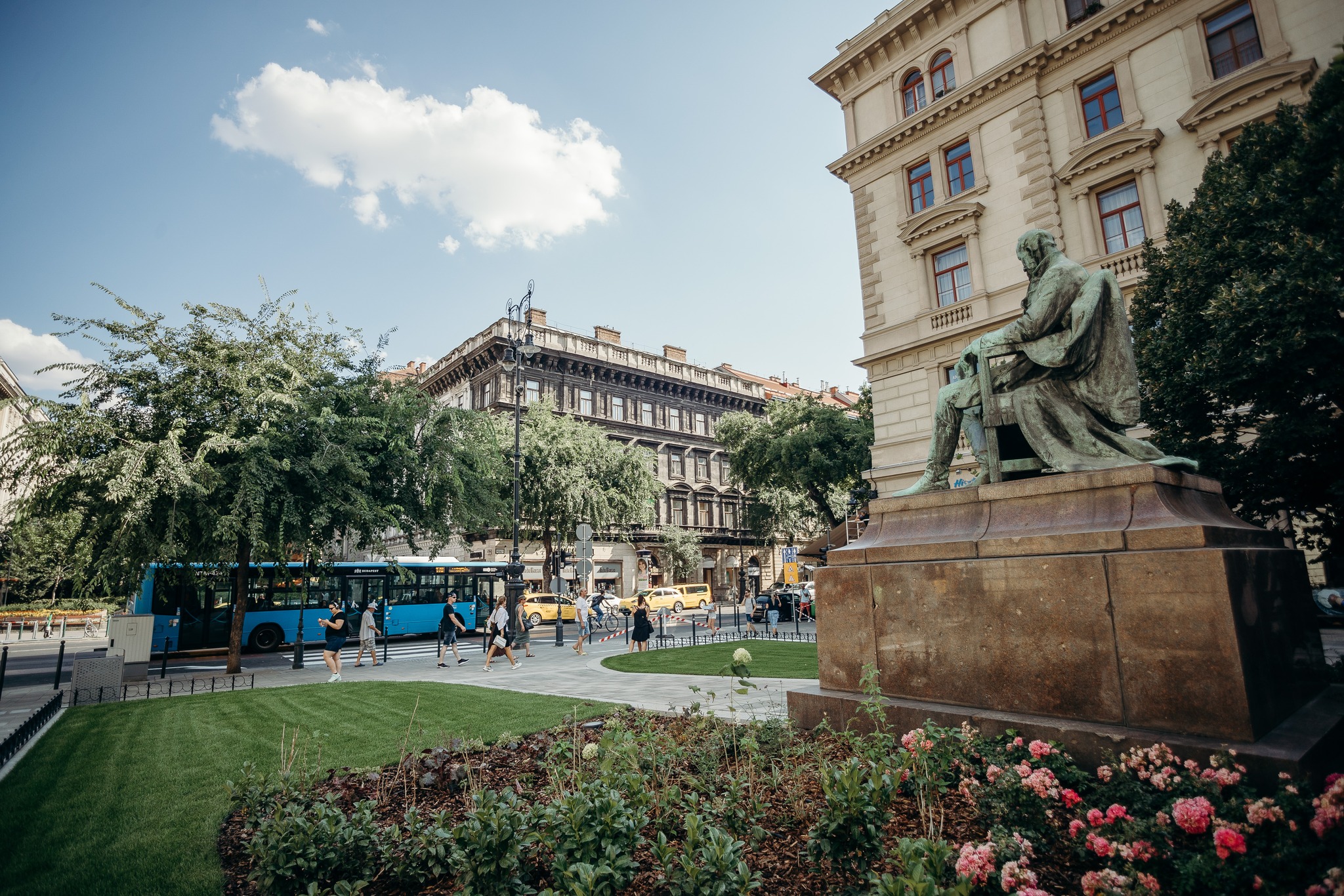 During the renovation, the roadway and the sidewalk were aligned, the painting was renewed, and small flower beds were placed at the end of the 45-degree parking lanes. 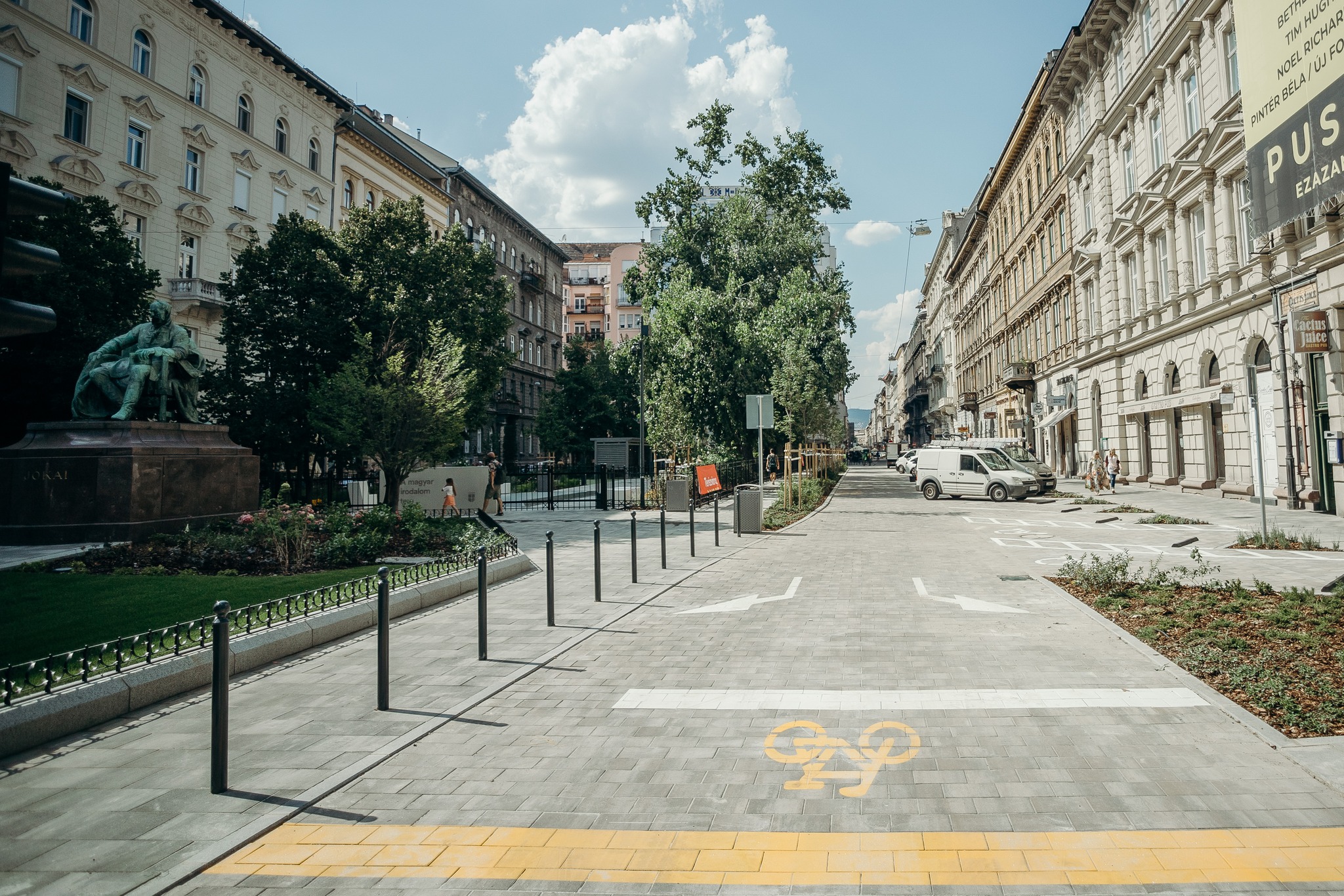 The roadway and the sidewalk have been leveled (Photo: terezvaros.hu)

Cover photo: the renovated Jókai square, with the csobogo in the middle (Photo: terezvaros.hu)