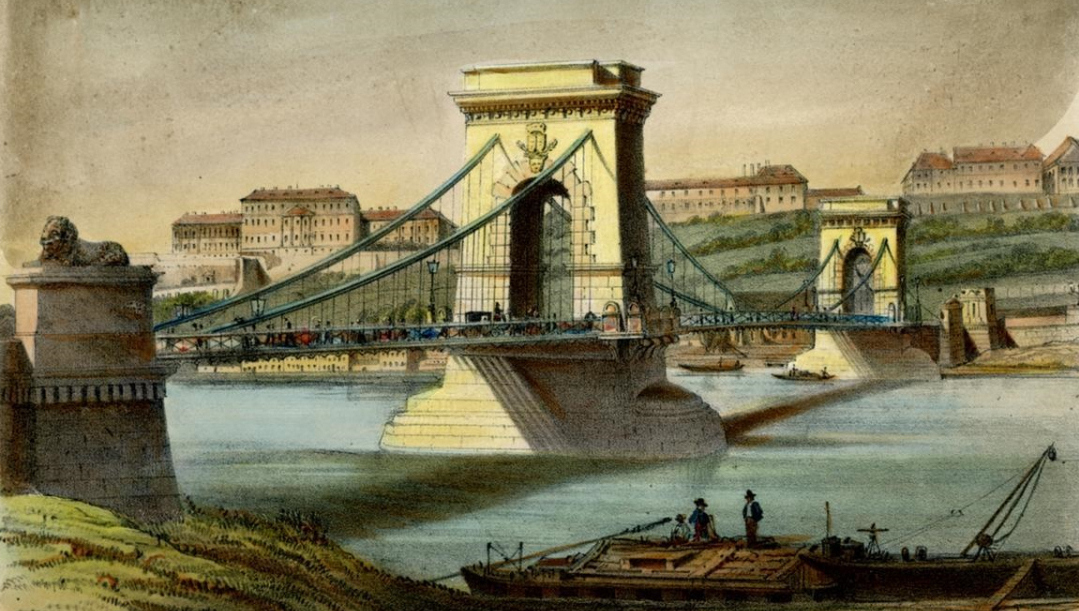 A ceremony in Pest 180 years ago: the laying of the foundation stone of the Chain Bridge

The foundation stone of the Chain Bridge is located under the bridgehead in Pest. It was laid down 180 years ago, on the afternoon of 24 August 1842, and the entire "elite" of that time was represented at the ceremony. The foundation stone laying ceremony was a carefully composed celebration, where it was also stipulated which guest would carry the decorative trowel or the hammer for the symbolic blows.

180 years ago, illustrious people marched to the banks of the Danube to descend into a deep pit. The time was 24 August 1842, 5 o'clock in the afternoon, the place, the Pest bank of the Danube, the structure, the foundation stone of which was laid, the Chain Bridge. The laying of the foundation stone was actually a big celebration, where the leaders of domestic political life appeared in the presence of thousands of spectators to take part in the special ceremony.

The ceremony started already at the construction gate, because it was here that Archduke Charles, who arrived as the king's personal representative, was received. The 27 August 1842 issue of Jelenkor described the arrival of the high-ranking guest as follows:

Archduke Charlesthe representative of our Majesty arrived as such: our Palatine in the uniform of his regiment with the country's chief officials and bridge electors at one of the gates of the chain bridge yard received and welcomed their brother with 101 cannon-shots, the princely representative who came from Buda all the way to the Chain Bridge yard between the ranks of the citizens and the regular military, among the rows of flags decorated with crests of the Hungarian imperial provinces, a Hungarian general in a bright uniform, went to a well-made tent on the south wing of the Chain Bridge yard.

The archduke was greeted by a huge crowd and a military band. From the tent, the procession went down to the work area according to a specified order, they even regulated who should carry what, for example István Széchenyi the wooden hammer that will be needed, William Tierney Clark, the designer, the trowel used for laying the foundation stone, Ádám Clark the plans. The workspace created in the bed of the Danube was decorated, everything was covered with red, white and green posters, and the chairs were also set up so that all the guests - the dignitaries of Pest and Buda - could see the events clearly. 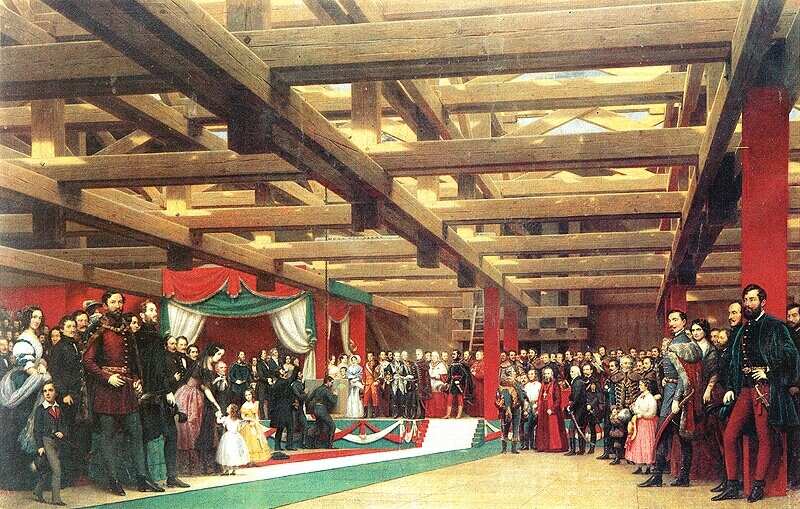 Here, Antal Tasner first read the document to be placed, which was signed by those present. This document listed everything that happened from 1832, that is, when Széchenyi got involved in the preparatory work, the adoption of the law, the conclusion of the contract for the construction of the bridge, right up to the laying of the foundation stone. The document already refers to Pest and Buda, connected by the bridge, as Budapest (!). We also know who wrote the document (it was not printed, but written by a calligrapher), named Károly Heuffel. This notable document was placed in a case, next to which coins were placed, according to the 11 September 1842 issue of Regélő, the following:

"In memory [of the event] this document was closed in the foundation stone together with gold and silver coins made this year of his majesty, gloriously reigning Austrian emperor Ferdinand I and apostolic Hungarian king under the name Ferdinand V."

After the sealed case was placed in the pre-placed cavity, a stone block of 130 Viennese quintal, i.e. 7.2 tons, was placed over the cylinder with a winch at the foreman's signal. 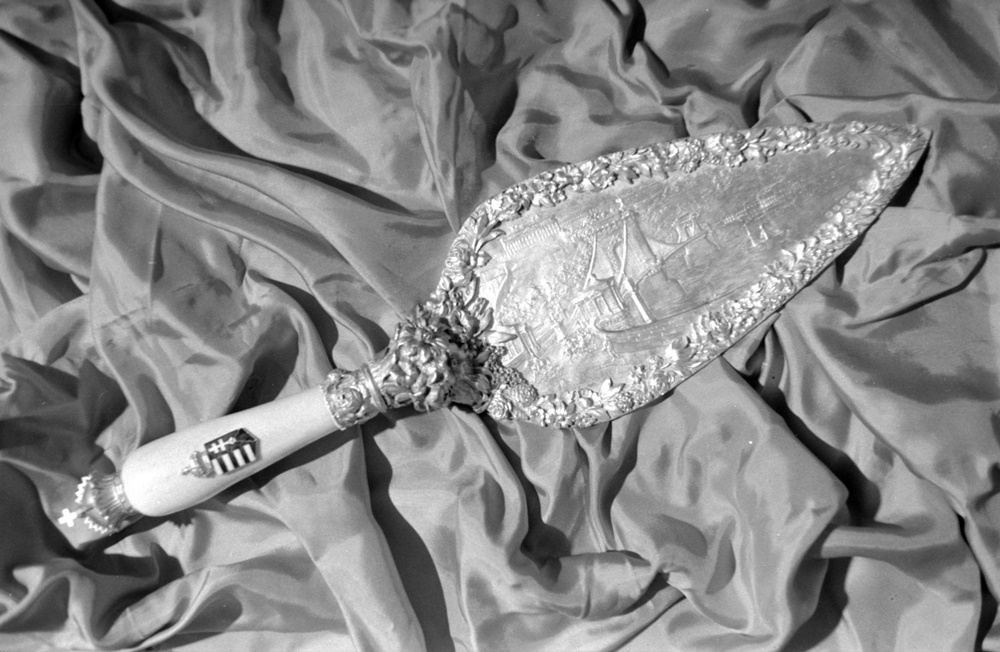 Exact copy of the trowel in the collection of the Hungarian Museum of Science, Technology and Transport (LTSZ: 10.75.13.1)

On behalf of the king, Archduke Charles Habsburg was the first to cast mortar on the stone block using a silver trowel with an ivory handle made for this purpose, and then tapped the stone block three times with a wooden hammer. Palatine Joseph, judge royal György Mailáth, archbishop József Kopácsy of Esztergom, treasurer Gábor Keglevich, György Sina, István Széchenyi, William Tierney Clark and Adam Clark also acted in the same way. The military band then played, and after the one-hour ceremony the dignitaries left.

The construction of the bridge had already been going on for 3 years. It took so long to organize this symbolic but important event, because the technical solution available at the time, but in fact a very rudimentary method, was used to lay the foundation of the bridge. In order to prepare the foundations for the bridgeheads and pylons, a dry working area was obviously needed. This was achieved by driving many thousands of wooden piles into the bed of the Danube in three rows with steam hammers, and waterproofing clay was stuffed between the three rows of wood, and then the water was pumped out. This rather thick work, called a cofferdam, was meant to keep the water out. The piling itself took a very long time. 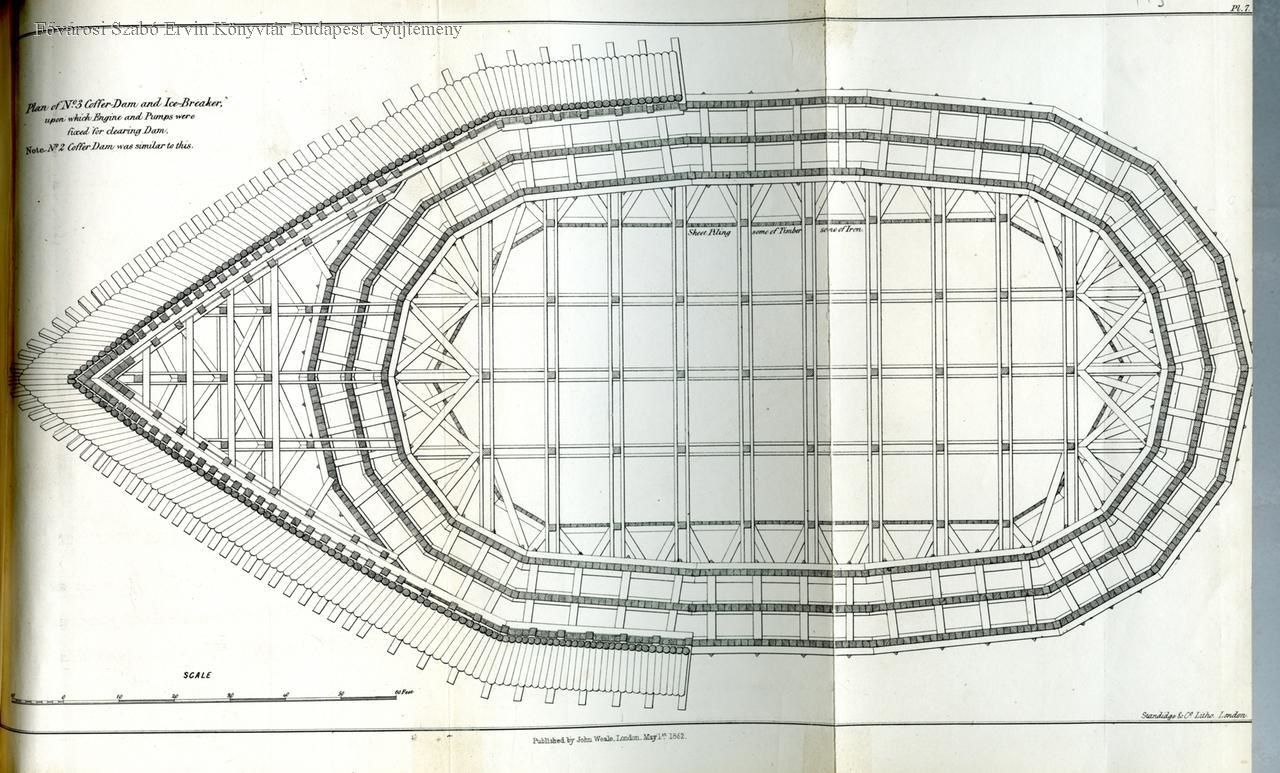 The design of one of the pylon cofferdam from the book of W. T. Clark published in 1852 (Source: FSZEK Budapest Collection)

If you look at the painting by Miklós Barabás of the laying of the foundation stone, you can clearly see the huge wooden scaffolding that held the dam structure above the heads of the dignitaries from the inside. (A few years later, completely different methods were used for the foundation, compressed air chambers, which made the work much faster.)

After the illustrious ceremony, Archduke Charles with his entourage first visited the national theatre, then the German theatre in Pest and Buda, where he was greeted by ovation everywhere. The chronicles recorded that Belizar was performed at the National Theatre that day.

The evening had another interesting moment. The youth of Pest marched to Széchenyi's apartment to serenade him with a torch, but Széchenyi was not at home. Then the crowd, which wanted to celebrate, marched under Kossuth's apartment, which of course caught him by surprise. But Kossuth cut himself off, giving a speech to the young people in which he suggested that the bridge being built should be named after István Széchenyi. (The idea made Széchenyi very nervous, he was afraid that if this idea became more popular, it would strengthen the position of the opponents of the bridge.) 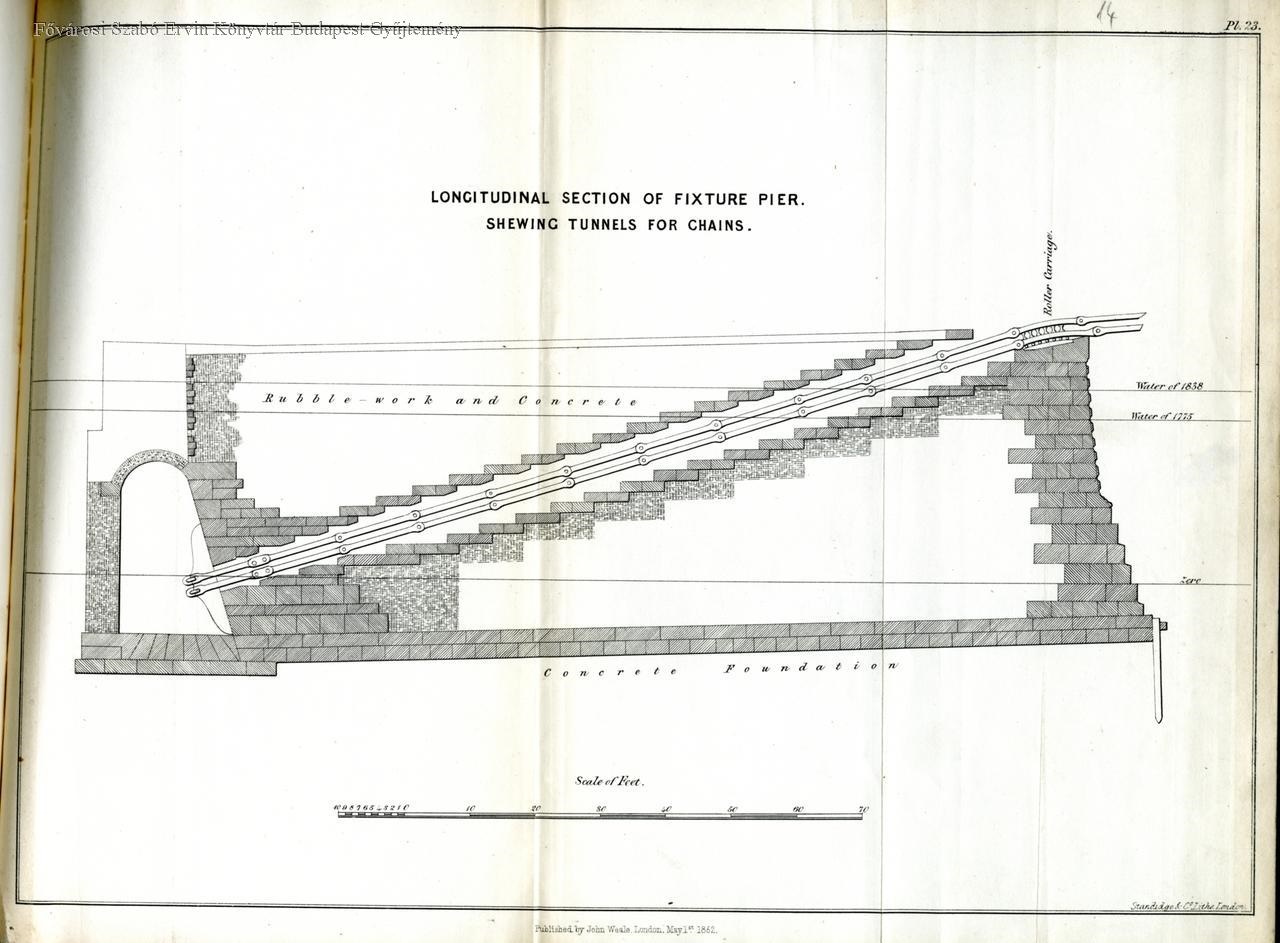 The plan of the bridgeheads shows that it was a very large structure (Source: FSZEK Budapest Collection)

The next day, the work area was opened to the public, and the general public was admitted to the scene of the laying of the foundation stone, who could view it in groups.

The decorative trowel used in laying the foundation stone is kept by the Hungarian National Museum. The image of the future Chain Bridge was engraved on this spoon - which was made possible by the fact that the instructions for decorating the spoon were given by the designer W. T. Clark. This image later spread as a copperplate and may have given rise to a misunderstanding. In 1842, Clark had not yet planned to place lions on the bridgeheads, and so the drawing of the bridge on this famous spoon shows lamps in place of the lions, as the later copperplates based on this image. This is also why the misunderstanding spread that the lions were only installed in 1850 or 1852, although they were already there when the bridge was opened on 20 November 1849.