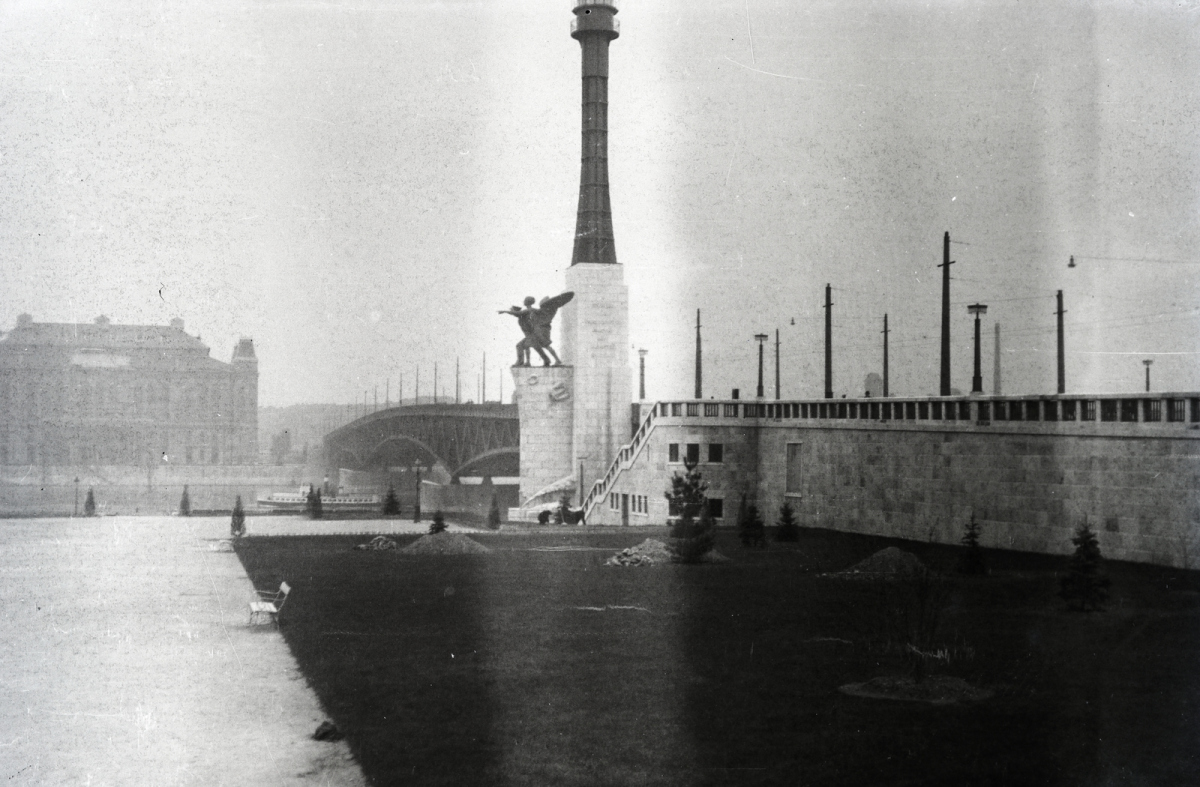 Horthy Miklós Bridge was built eighty-five years ago - After the post-war reconstruction, it became Petőfi Bridge

The Petőfi Bridge is perhaps the least known bridge in inner city Budapest. It is not a spectacular creation, it is not photographed by visiting tourists, but still, from a traffic point of view, it is one of the most important crossings in the city. The bridge was handed over 85 years ago, on 12 September 1937, back then it was called Horthy Miklós Bridge.

The Outer Ring Road reaches the Danube at Boráros Square in the south. In practice, it was built by 1896, but Boráros Square was quite disorganized. There stood the Elevator, i.e. the grain warehouse integrated with the grain stowage, from where the wheat arriving by ship to the mills in the capital was stored and loaded, the public warehouses and a freight station. On the other side, on the right bank of the Danube, was the embankment of the Kopaszi dam and the Lágymányosi lake, which stretched from the railway bridge to today's Gellért Square, which was separated from the Danube by the dam. There was nothing on the land behind it. 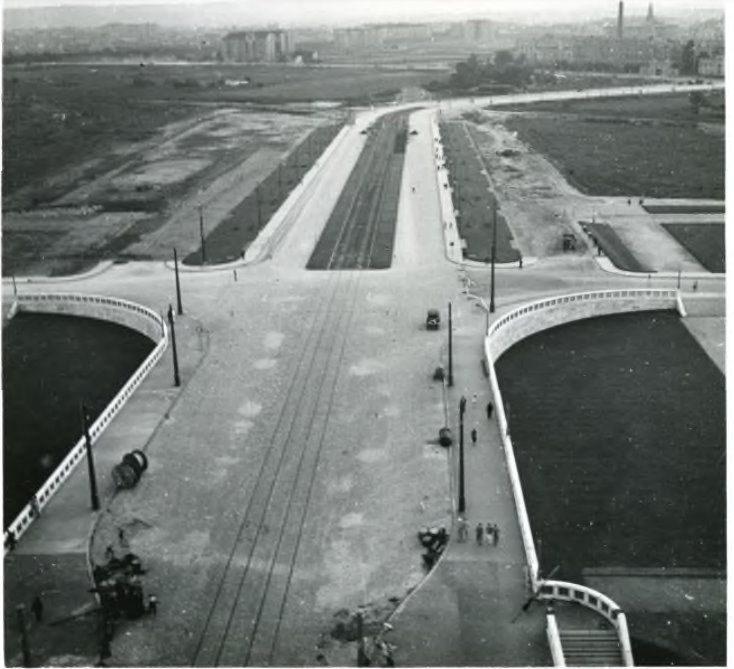 The Buda side at the time of the handover of the Horthy Miklós Bridge in 1937 (Photo: Hungarian Museum of Science, Technology and Transport TFGY 2018.176.1.pdf – Album showing the construction of the bridge)

Yet the citizens of Ferencváros actively lobbied for a bridge to be built here from the mid-1880s, and in 1891 it was practically decided. It seemed at that time that Budapest's next Danube crossing could be built here, after the Vámház Square Bridge, i.e. today's Szabadság Bridge, and then the Eskü Square Bridge, i.e. Erzsébet Bridge. However, history intervened several times. On the one hand, in 1908, a decision was made to build a bridge near Óbuda, and then World War I broke out. In the post-war economic climate, there was simply no way to build a bridge.

Then the great world economic crisis broke out. Interestingly, this gave a boost to bridge construction, because large-scale public constructions provided a good opportunity to deal with the huge unemployment. Tenders for the Boráros Square and the Óbuda Bridge were issued at the same time in 1930. There were many ideas for the bridge planned at Boráros Square, including a lower arch bridge, a chain bridge and a single-span cable bridge. All of the 17 plans included an through bridge, while the bridge department of the Ministry of Trade presented a plan for a girder deck-bridge. The government decided in favour of the latter. The development of this draft was led by Pál Álgyay-Hubert. 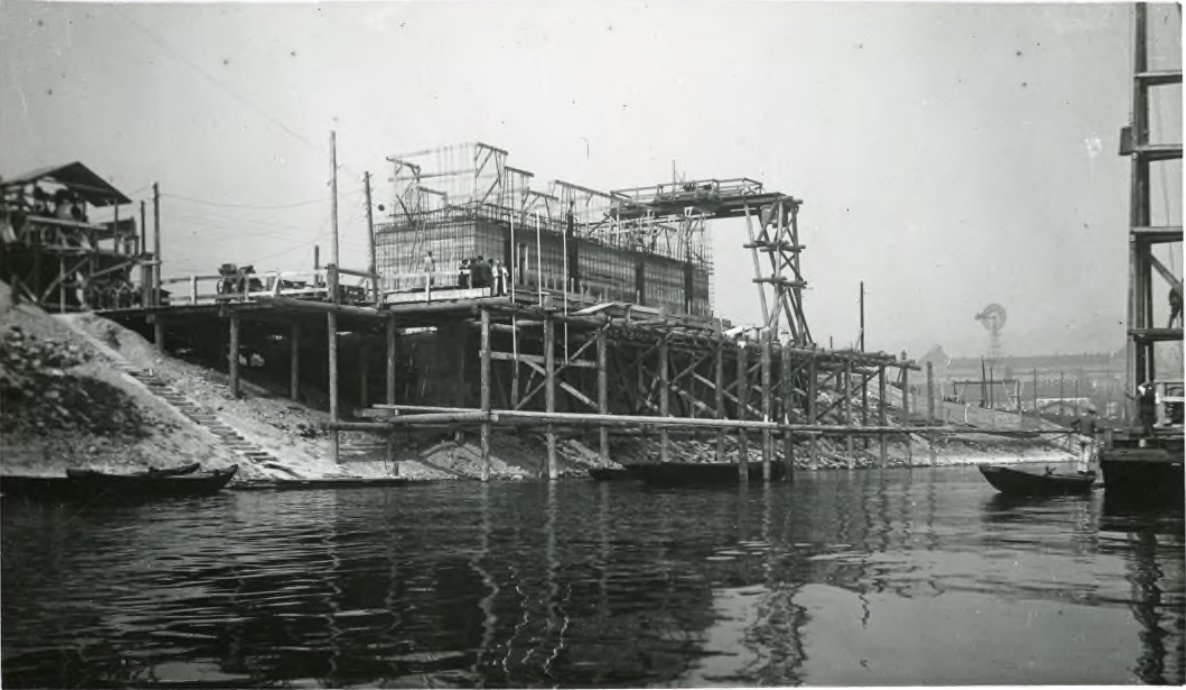 Even though there was still nothing in Buda, and the crossing would have been extremely important for Óbuda in order to reach the factories in Újpest more easily, the Minister of Trade János Bud briefly summarized in the Parliament on 4 April 1930, why the southern bridge was built first:

"I put out the design tender for both bridges, that is, both the Boráros square and the Óbuda Bridge. [...] The Boráros-Square Bridge is simpler than the Óbuda Bridge, the latter of which - one could say - actually consists of two bridges, so the experts and professionals themselves asked me to allow a longer tender period, because the construction of the whole is much more it takes time.”

Indeed, the Boráros Square bridge was simpler, construction could start faster, but the bridge was already named after the governor, Miklós Horthy. The costs were borne by the state and the capital in a ratio of one-third to two-thirds, which is why real estate transfer tax was raised in the capital.

The construction itself started in 1933, and it was here that reinforced concrete caissons were used for the first time in Hungary. (The caisson is a relatively large "box" that is open from the bottom, it is lowered to the bottom of the river, and the water is forced out with high-pressure air.) In fact, the Hungarian radio broadcast from such a caisson when it reported on the construction. 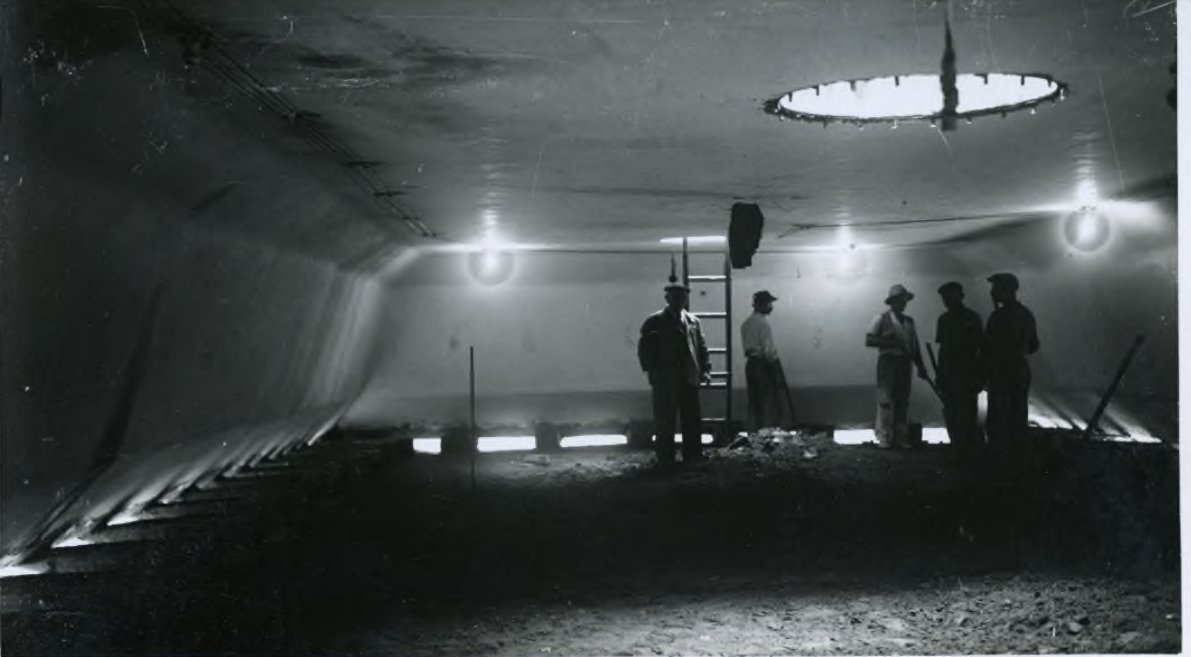 The interior of the reinforced concrete caisson of the Buda pier (Photo: Hungarian Museum of Science, Technology and Transportation TFGY 2018.176.1.pdf – Album showing the construction of the bridge)

The bridge itself is a lattice girder bridge, despite the fact that the structure has a distinct curve, it is more akin to the Szabadság or Árpád Bridges than to the Margit Bridge.

Construction progressed quickly, and it was completed in 1937. The bridge itself was relatively unadorned, although there were plans to use some sort of decoration on the piers. However, a monument was placed at the bridgehead in Buda, the monument to the Austro-Hungarian sailors who died in World War I, the stone plinth of which was modelled after the bow of the Novara cruiser (Horthy was the first commander of this ship), a smaller but working copy of the Fiume lighthouse was placed on the monument, and a group of sculptures entitled Genius of the Attack, created by István Szentgyörgyi.

On the bridge, not only was there a road track - the outside of which could be used by slow vehicles and the inside by automobiles - but also a tram, and even a bicycle path was created. The handover took place on 12 September 1937, naturally in the context of a huge celebration, as reported by Budapesti Hírlap on 14 September 1937:

"On Sunday morning, the new Horthy Miklós Bridge in Boráros Square was inaugurated in an extremely ceremonial setting, the construction of which was decided by the Parliament in a special law to commemorate the ten years of the governor's reign. The distinguished invited audience began to gather on the magnificently decorated grandstands set up at the Buda end of the bridge well before 10 o'clock. Among those present were Royal Prince Joseph, Royal Princess Augusta, Prime Minister Kálmán Darányi, Count Bertalan Széchenyi, Speaker of the Upper House, Gyula Kornis, Deputy Speaker of the House of Representatives, Minister of Religion and Public Education Bálint Hóman, Minister of Finance Tihamér Fabinyi, Minister of National Defense Vilmos Röder, Andor Lázár Minister of Justice, Minister of Trade and Transport Géza Bornemisza, Lord Mayor Jenő Karafiáth, Mayor Károly Szendy, and several members of the diplomatic corps, many members of both houses of the Parliament, as well as many other military and social dignitaries."

The MÁVAG's "Steel Voice" choir hummed, speeches were made, the governor also crossed the bridge, and after the ceremony, the traffic started. In addition to the tram, two bus lines, 66 and 39, were also routed over the bridge. It is true that at that time not all trams passed through Buda, so a tram terminus was also built at Boráros Square. 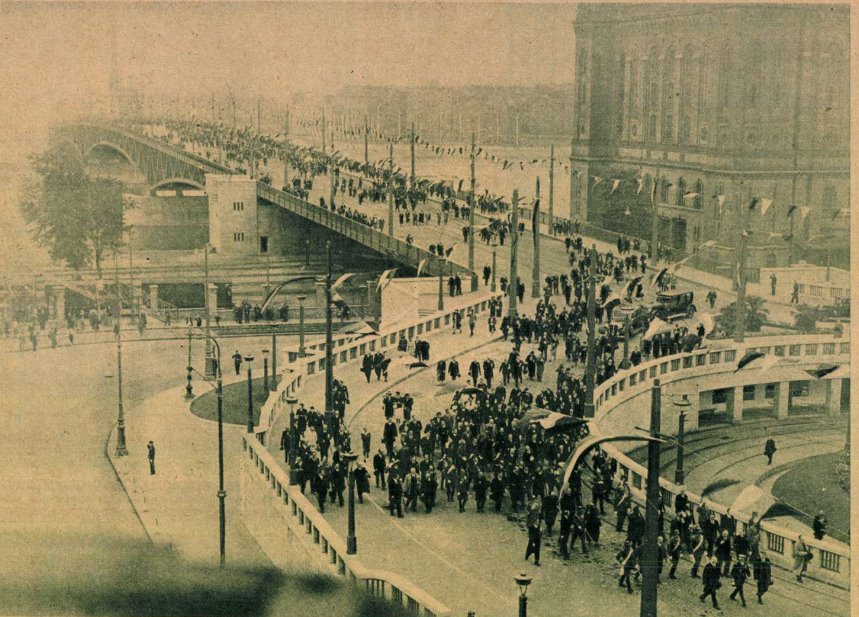 The new three-span, 524-meter-long bridge including the ramps - which cost around 10 million pengős - didn't really lead anywhere at that time, but plans were already ready for the arrangement and construction of Lágymányos, for which this bridge was actually the first step, since it was a connection to the inner city of Pest. As a result, rapid construction began in Buda.

However, at the end of the war, in January 1945, the virtually brand new bridge was blown up by German troops. Its reconstruction was not the most urgent, the decision was made that after the completion of the Árpád Bridge, which was abandoned due to the war, the construction of the Boráros Square bridge would be started (no one was using the name Horthy at that time). 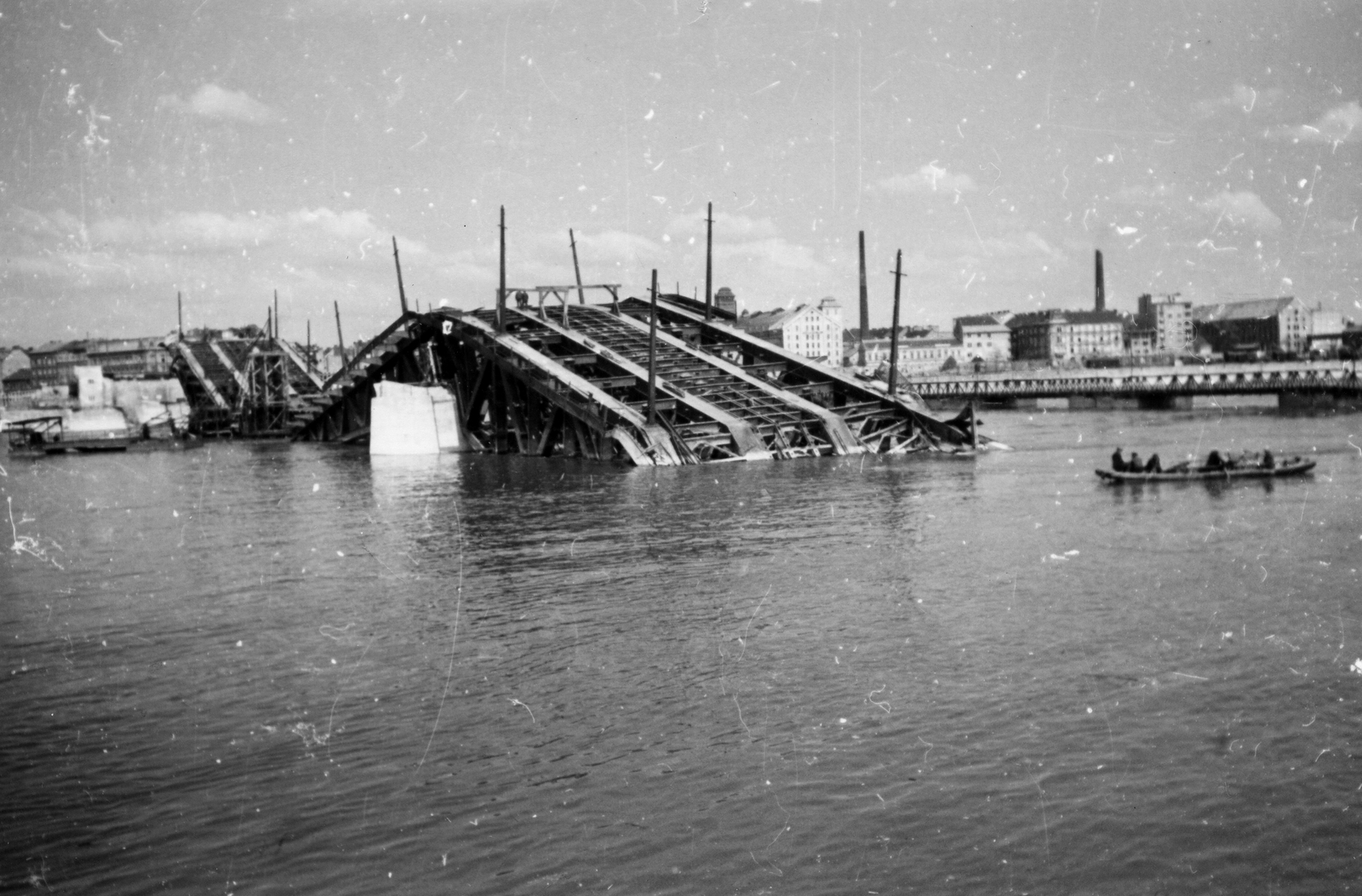 It was possible to wait for the reconstruction, because after the completion of the Chain Bridge, in 1949, the pontoon bridge connecting Döbrentei and Petőfi Square (which was such a structure that buses could also travel on it) was erected at Boráros Square. Even though the bridge no longer stood at Petőfi Square, its name remained Petőfi pontoon bridge, and when the name of Boráros Square bridge had to be decided in 1952, the Executive Committee of the Budapest Socialist Council named the old and new bridge after Petőfi. The Petőfi Bridge, handed over in 1952, was fundamentally the same as the old bridge, with only a few differences. The bridge was made slightly wider, the Naval Memorial was demolished and its colour changed as the new bridge became grey compared to the pre-war blue. 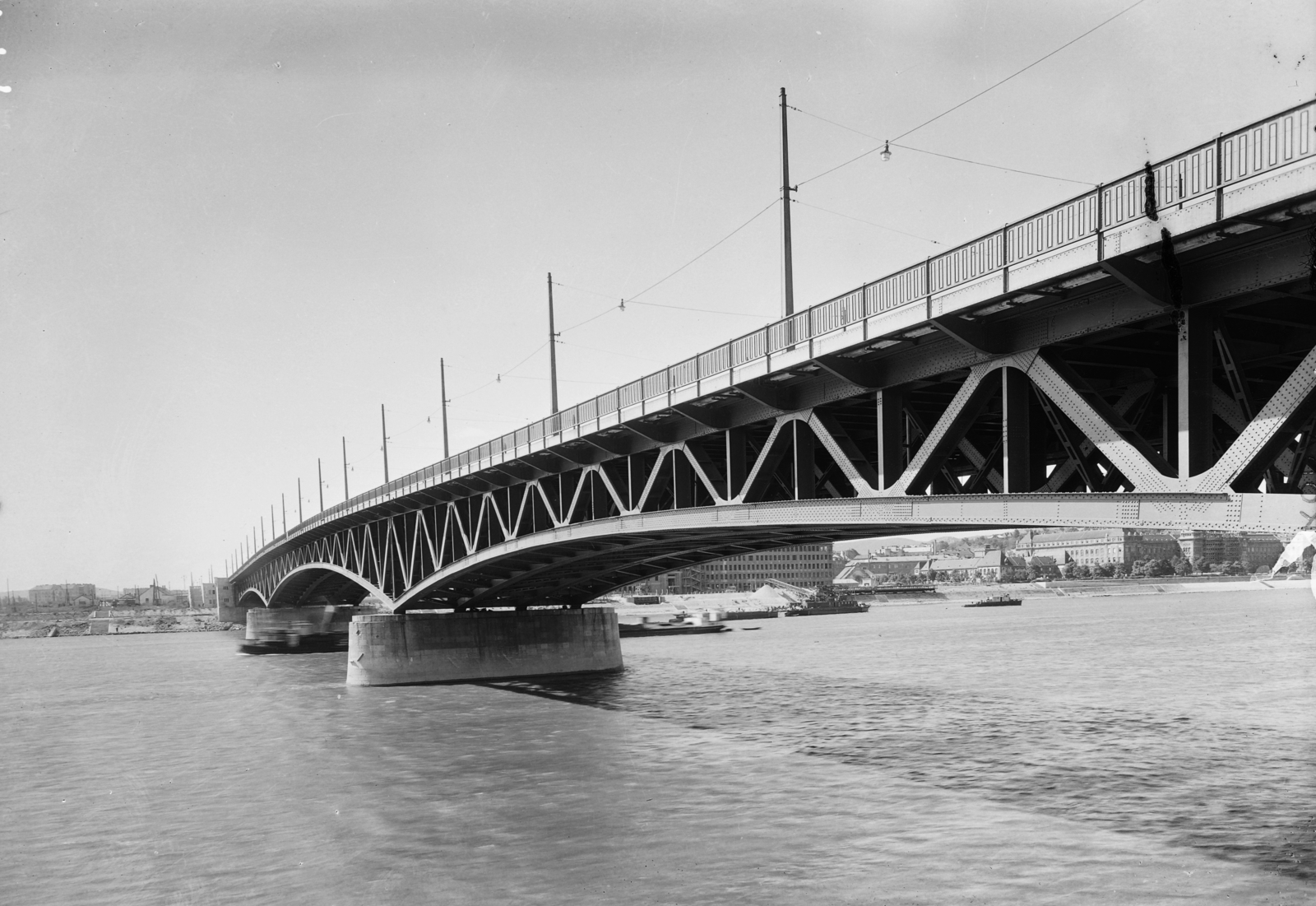