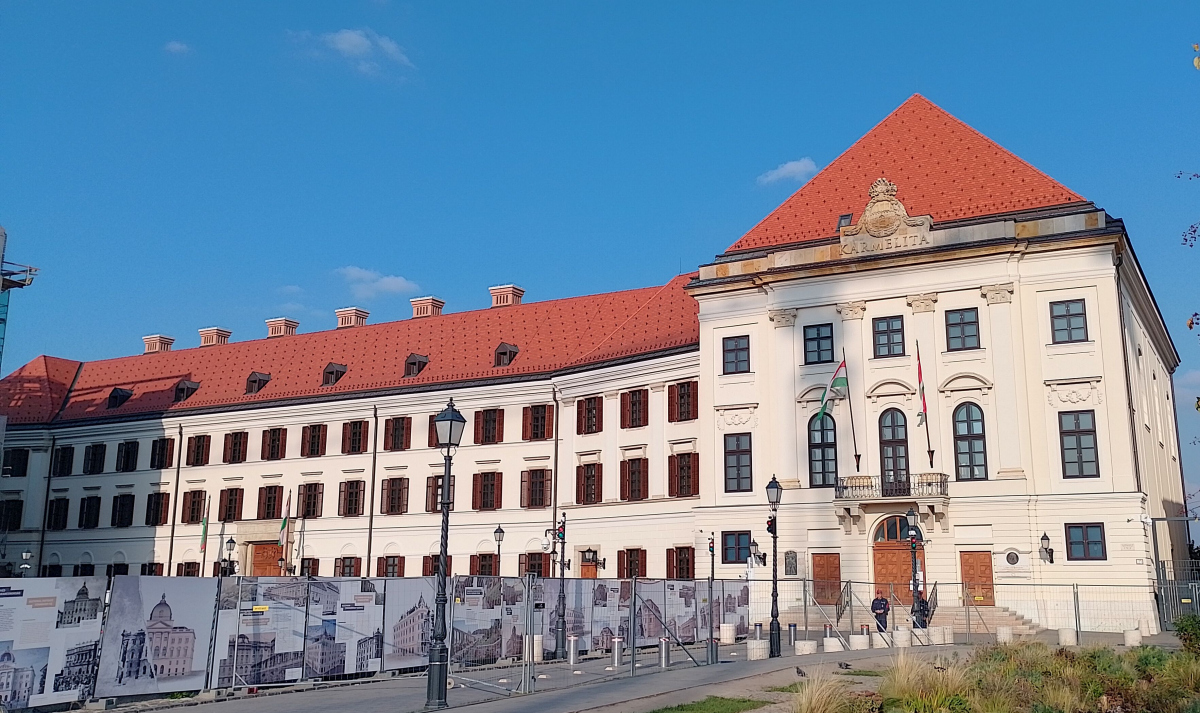 One of the characteristic buildings of the Buda Castle is the Carmelite monastery, which has been used by the Prime Minister's Office for almost four years. The eponymous order of monks was actually forced to withdraw from the walls a long time ago, precisely 235 years ago, their church was turned into Castle Theatre. The ruthless intervention also greatly affected the building itself, but it was mostly then that the image that is known today was formed.

The area of the Buda Castle was very densely built in the Middle Ages, several churches were located north of the Royal Palace. From 1270, the St. John's Church of the Franciscans stood in the place where the Carmelite Monastery is located today, which later belonged to the St. Sigismund presbytery. After the Castle fell into Turkish hands, the building was transformed into a mosque, and the Basa of Buda set up his residence in the monastery. It was largely destroyed during the recapture in 1686, and its new owners, the Jesuits, soon began to restore it. However, after they also got the Church of Our Lady (Matthias Church), in 1693 it was handed over to the Carmelite order.

The Carmelites are a lesser-known religious order, their full name is the Order of Our Lady of Mount Carmel. It was established at the end of the 12th century, their first monastery was on Mount Carmel, located in the northern part of today's Israel, hence its name. They fled the Holy Land and came to Europe because of the attacks of the Saracens. Originally, they were hermits who followed strict rules, and although their regulations were relaxed over the centuries, they lived in seclusion even in modern times. It is a contemplative order, and its members spend most of the day praying and reading the Holy Scriptures. 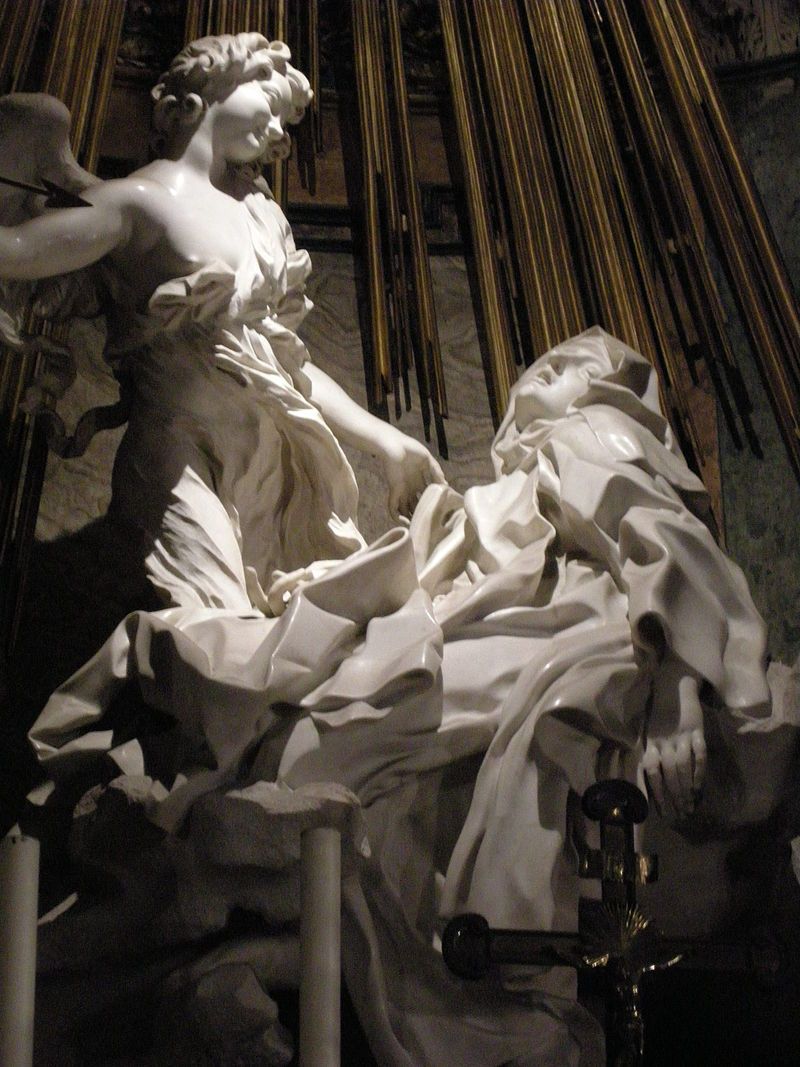 Between 1725 and 1736, the order built a one-nave, one-tower church, as well as the convent connecting to it from the north, instead of the medieval buildings. The latter is quite large: it runs parallel to the Danube and reaches all the way to Dísz Square. It consists of three wings, which - together with the church - border a rectangular courtyard. Above the ground floor, there are two floors and a high roof, so it has become a defining element of the Castle's panorama. From Pest, the northern end was particularly interesting, where the refectory, i.e., the dining room, was located in a protruding building wing: it had much larger windows, which were separated by vertical wall strips (lesenes). 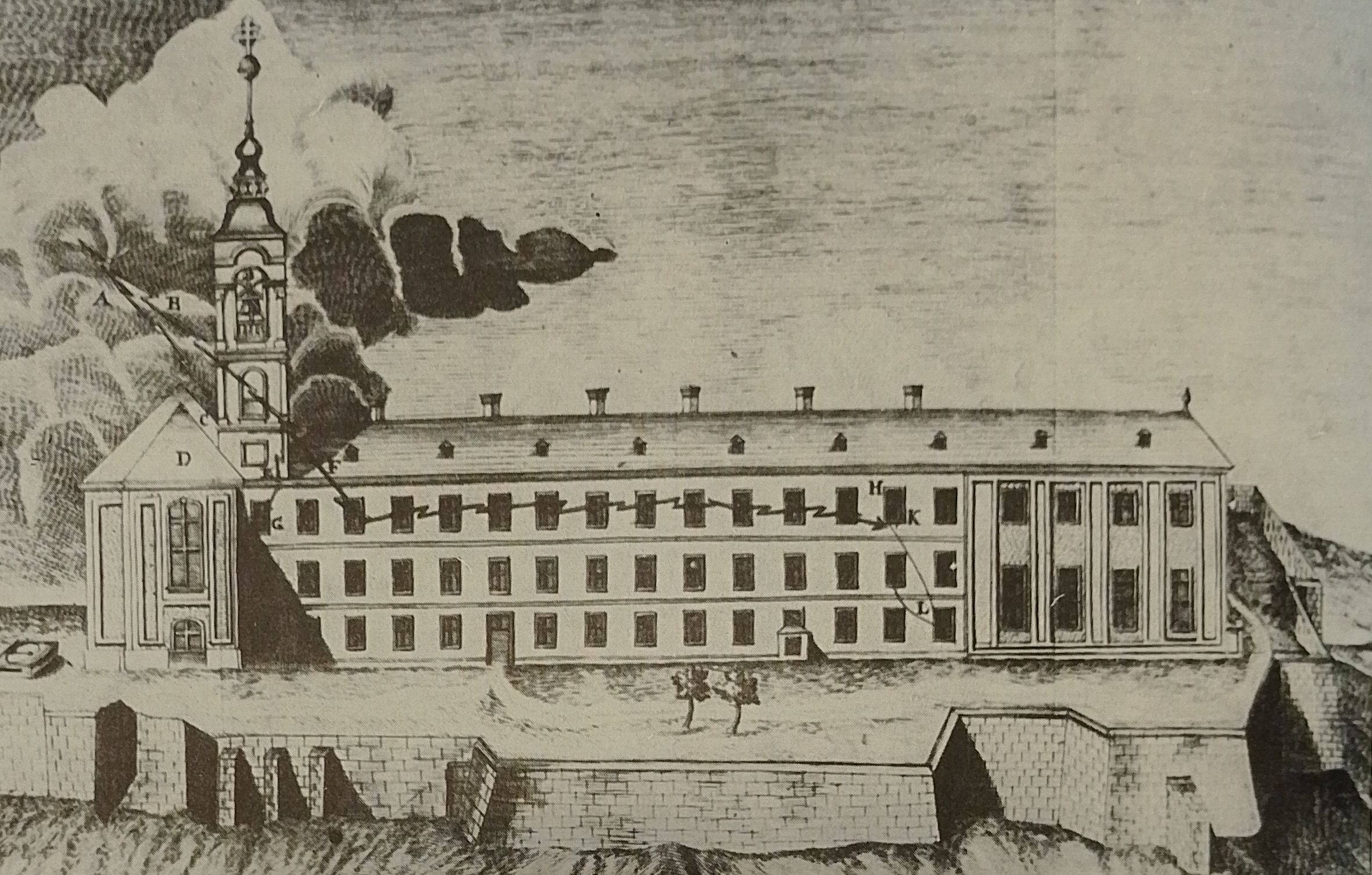 The depiction of the Carmelite monastery in Leopold Schaffrath's book published in 1778 (Source: Frigyes Pogány (ed.): Monuments of Budapest I.)

The church was in Baroque style, its single tower was connected to the northern side of the sanctuary, and its straight-closed sanctuary faced the Danube. Its interior space was covered by a vaulted ceiling with drawers, which were divided into sections by wide straps. The vault was supported by pillars protruding from the wall plane, which were so thick that the surface formed between them could be used as a chapel. A choir was placed above the entrance, and a sacristy was added to the end of the sanctuary. It is known from records that its pulpit was made by Károly Bebo, and the frescoes in the vaults were made by György and Henrik Falconer. 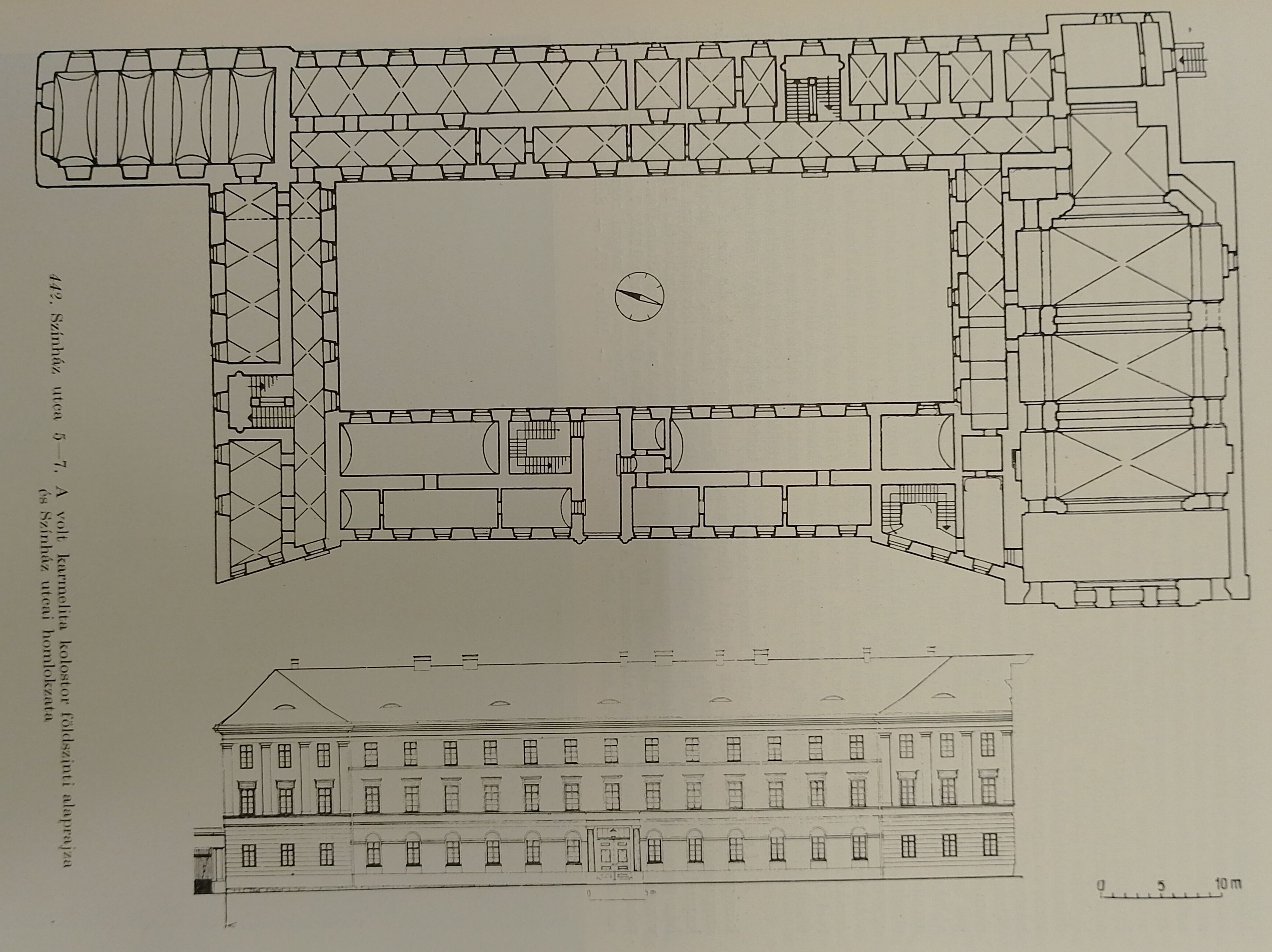 The floor plan of the monastery and the church (Source: Frigyes Pogány (ed.): Monuments of Budapest I.)

In 1781, Joseph II, "the king with a hat", dissolved the monastic orders that did not deal with teaching or healing, so the Carmelites also had to leave their monastery in the castle. At first, apartments were created in it, and the church was used as a warehouse. When the monarch visited Buda in 1786, he decided that the monastery should be turned into a casino and the church into a theatre. He entrusted Farkas Kempelen, who became known for his chess machine and other inventions, with the preparation of the plans, who immediately got down to business and completed the work by the fall of the following year. The masonry work of the reconstruction was carried out by Kristóf Hikisch, and the stone carving by Ferenc Endl. 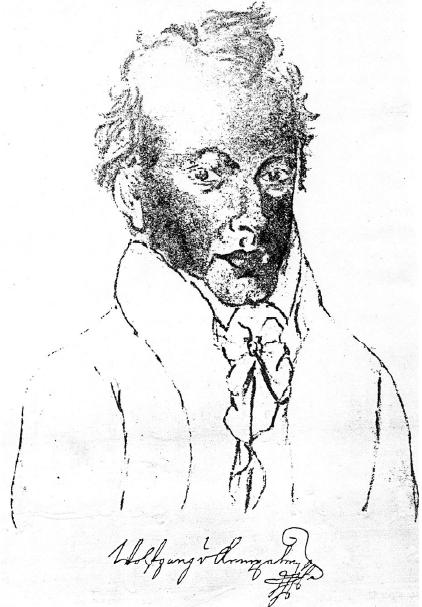 Self-portrait of the architect and inventor Farkas Kempelen (1734-1804) (Source: hu.wikipedia.org)

The casino was mainly used to entertain the officials of the government bodies moved from Pozsony [Bratislava] to Buda in 1784 (Locumtenential Council, Hungarian Court Chamber, Royal Curia), Kempelen, for example, established three bowling alleys here. He also enhanced the sophisticated environment by decorating the refectory with green braided frescoes, which emphasise the structural elements: he painted pilasters on the pillars, roses placed in cassettes (rosettes) on the straps and the vault - the so-called Bohemian spherical vault. Flower garlands and medallions were added to the alcoves thanks to the painter Ferenc Gelinek. It should be noted that wall paintings (seccos) were added to the interior even when it was inhabited by monks: the area around the stairs was decorated with portraits of saints. 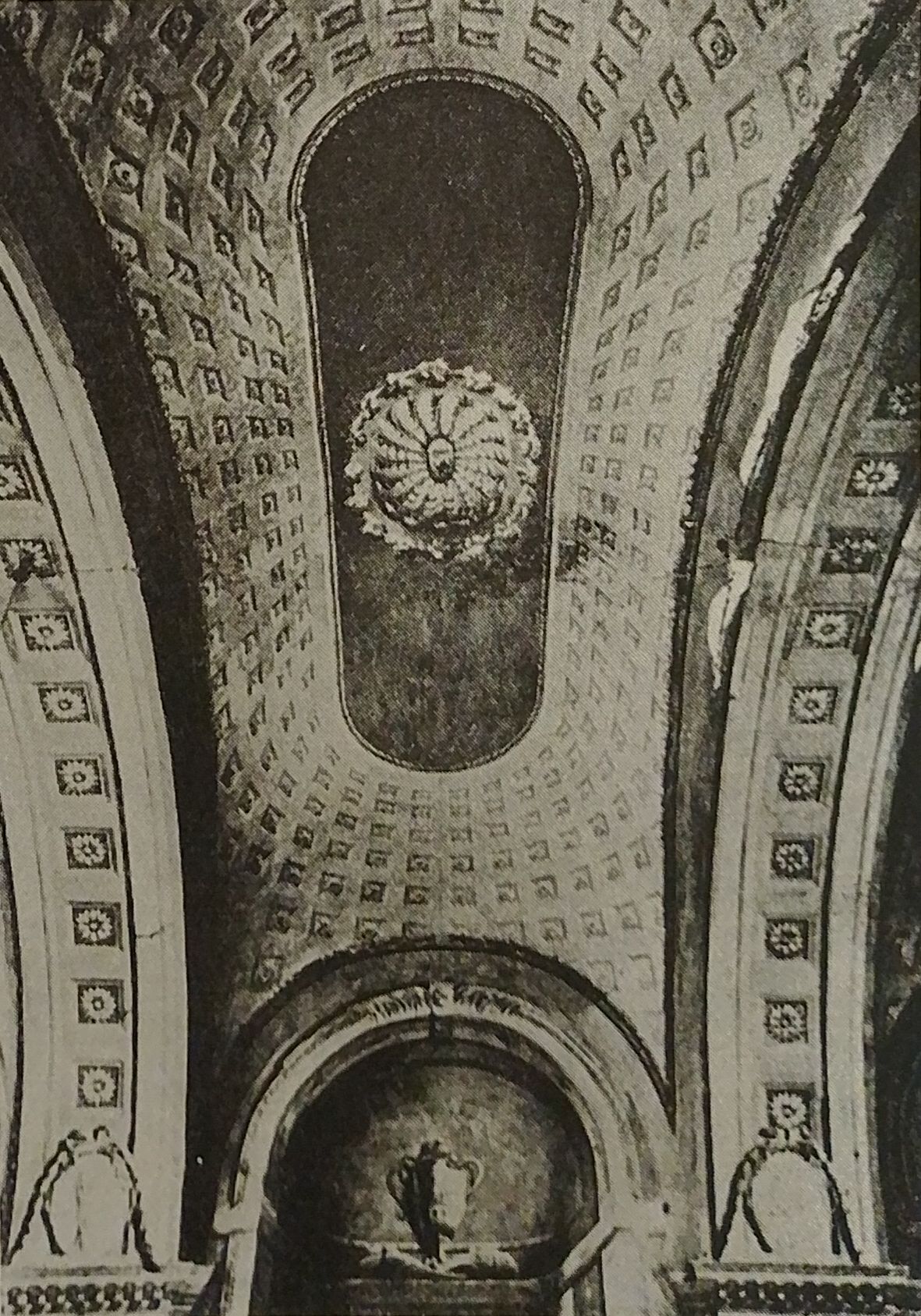 The frescoes of the refectory were also created during the Kempelen transformation (Source: Frigyes Pogány (ed.): Monuments of Budapest I.)

The facade of the western wing facing Buda, which is still visible today, is not Kempelen's work, the building got it in the middle of the 19th century. Taking a closer look, this is also revealed by the style, as the windows with straight closures, supplemented with a semi-circular field (lunette) on the ground floor, are typical of classicism. The same can be said about the gate held together by Doric columns with carved trunks. 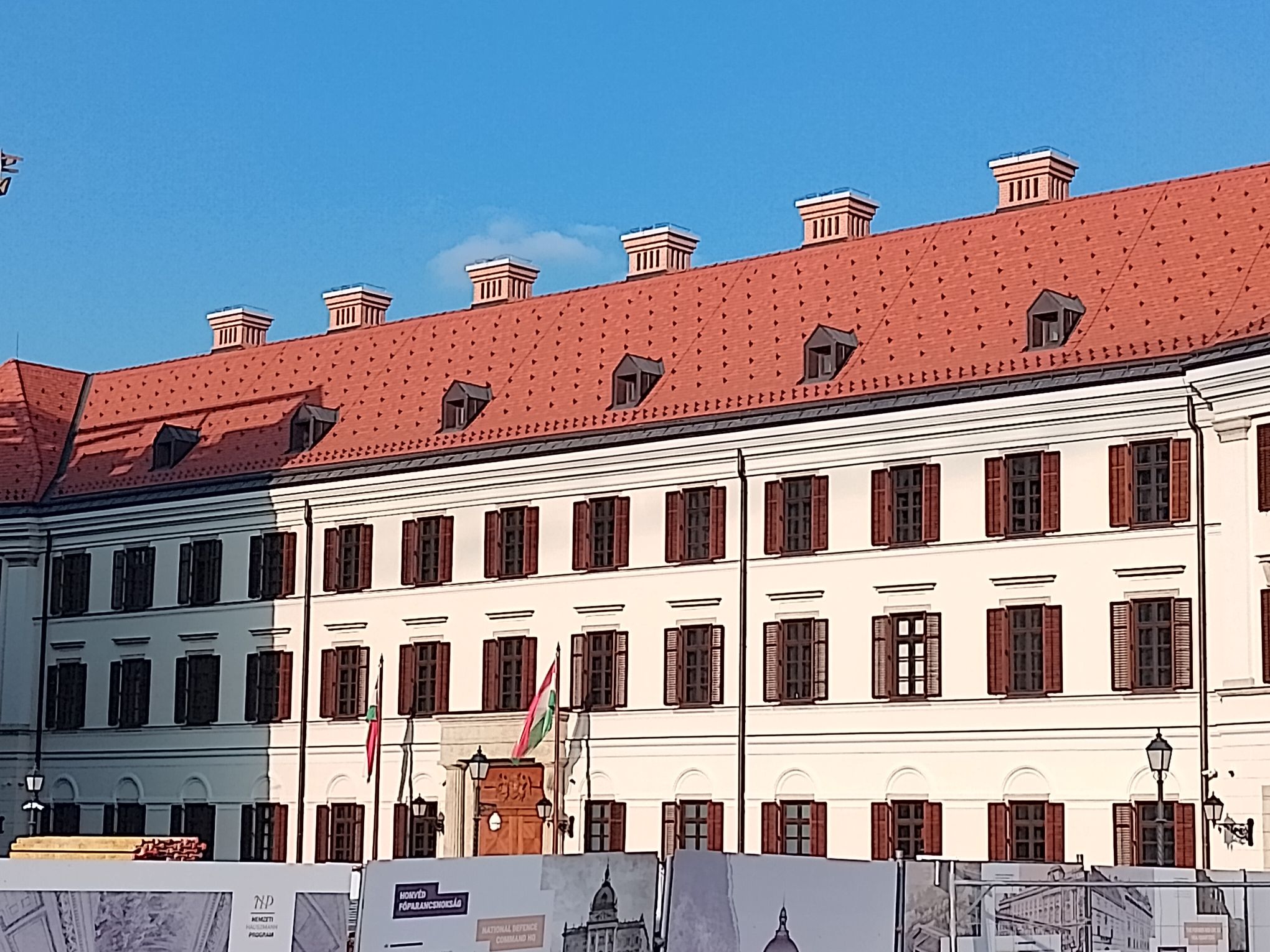 The converted facade of the former monastery (Photo: Péter Bodó/pestbuda.hu)

He carried out many larger-scale renovations in the church: he demolished the tower and the pediment with spiral decorations and modified the Baroque main facade according to the then-fashionable copf style [Zopfstil, late rococo style]. Its central section thus moves slightly forward (risalite), and the gates open on its ground floor, enlivened by the lines: the central one closes in a semi-circle, the outer ones close straight. In addition to its arch, the narrow balcony above it also makes it clear which is the main entrance. 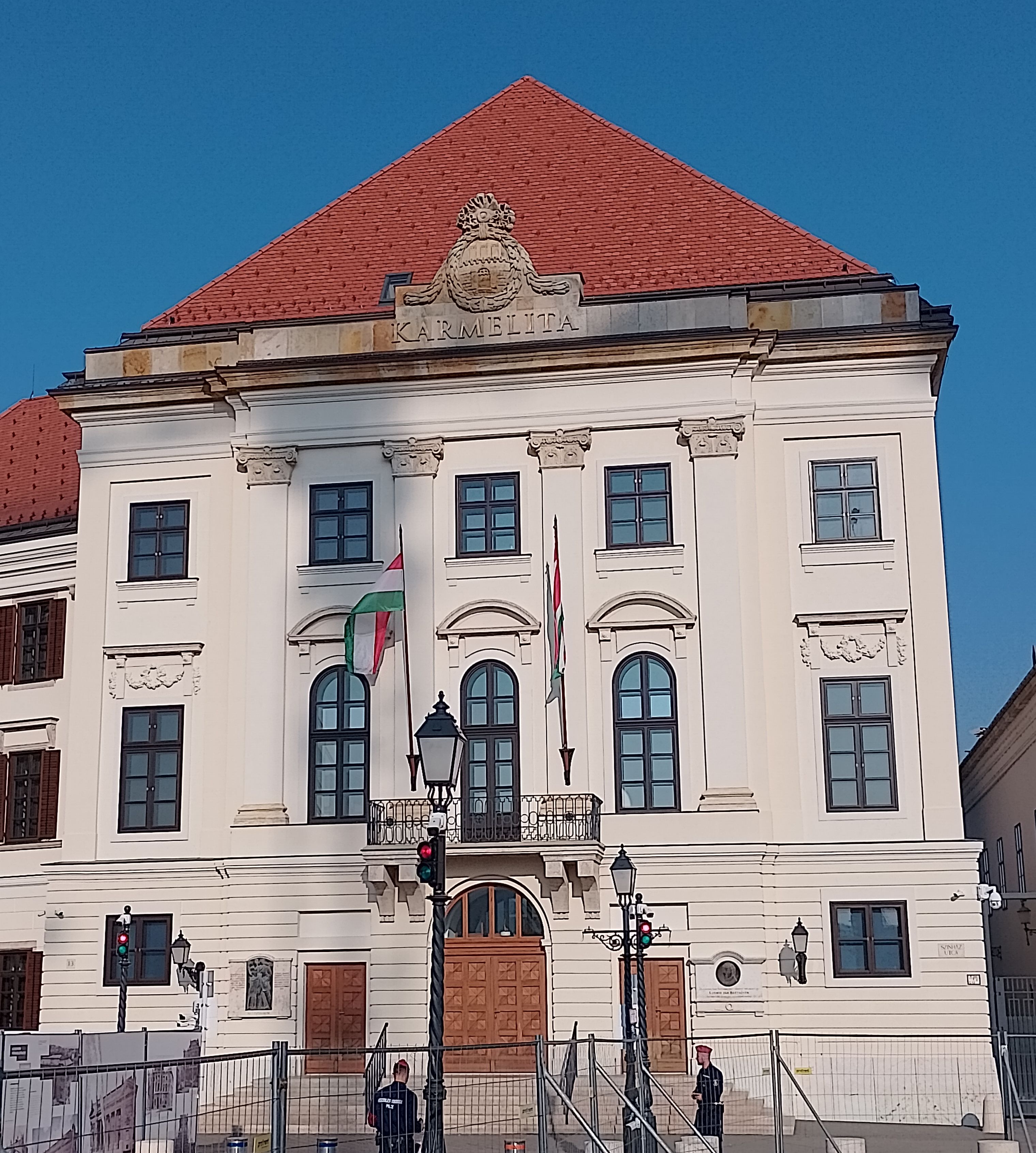 The facade of the church made in the copf style (Photo: Péter Bodó/pestbuda.hu)

On the first floor of the risalite, there were large and semi-circular windows, while the light enters the second floor through smaller, rectangular windows. The two levels are spanned by pilasters with Corinthian capitals, which also separate the windows from each other. The main facade is defined by a total of five window shafts, of which the risalite includes the middle three. Above the multi-segmented main cornice is a low attic, in the middle of which the coat of arms of Buda is placed in a semi-circular pediment, surrounded by a garland. Garland ornaments can also be seen above the outer windows, which are the most characteristic features of the copf style. 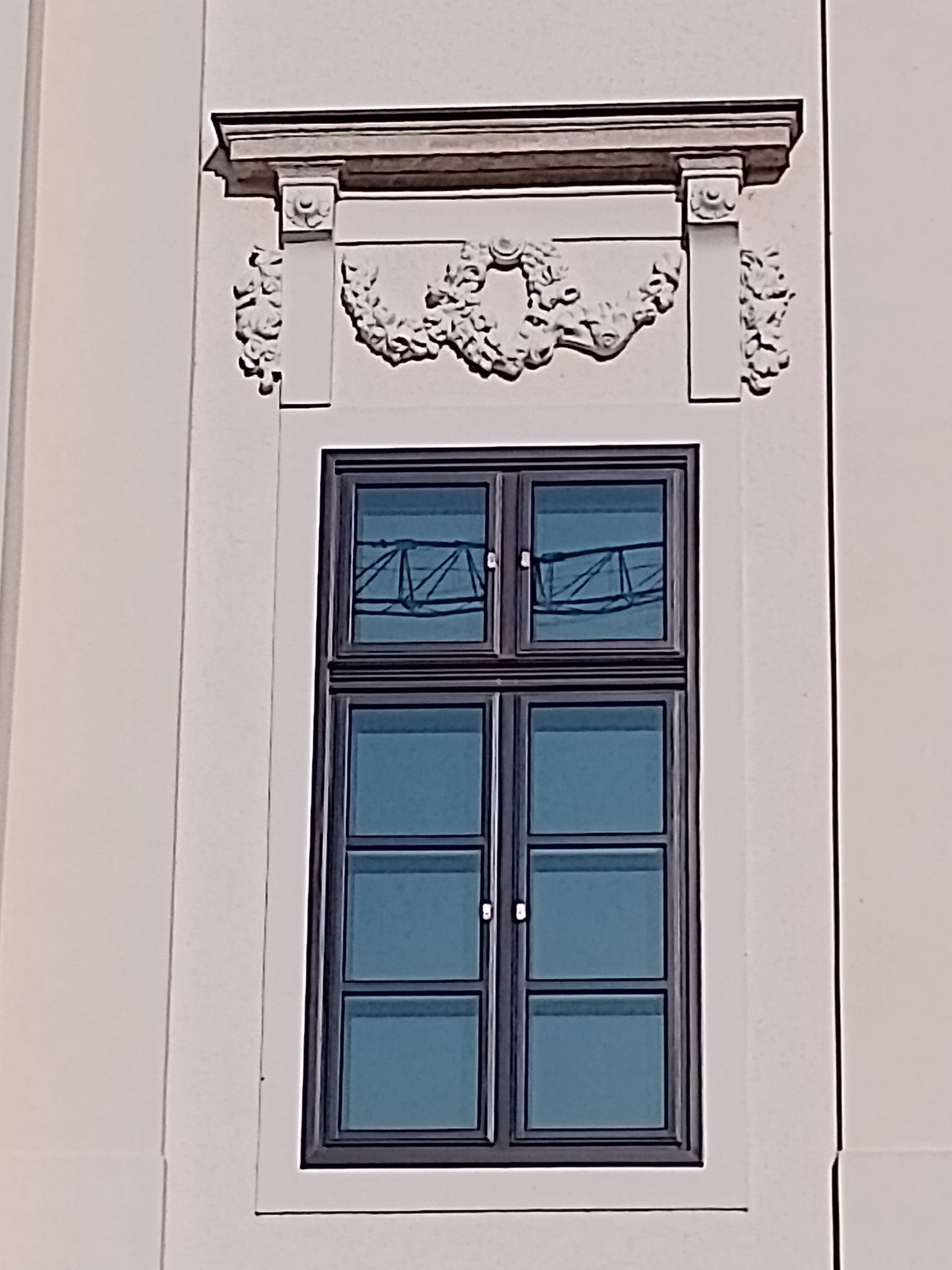 The flower garland above the window is a characteristic of the copf style (Photo: Péter Bodó/pestbuda.hu)

Fortunately, Kempelen was able to appreciate the works of art of previous eras, so he did not destroy the church's furnishings either, but found a new place for them. The main altar was moved to the parish church in Sárospatak, and the organ was moved to St. Anne's Church in Bomba (now Batthyány) Square. The side altars, flooring and other objects were auctioned off, but the bells, unfortunately, fell victim to the building's change of function, as cannons were cast from them.

In the vacated church, the theatre was placed in such a way that the stage was placed in the place of the sanctuary and under the nearest vault area, and the auditorium was placed in the nave. Therefore, the roles of the parts of the space have practically not changed, it can be said that the former church liturgy has been profaned. The capacity was increased to 1,200 seats using a gallery running along the walls in a semicircular arc on three levels, which could be reached from the staircases rising on both sides of the forecourt. For better acoustics, a flat ceiling was placed over the auditorium. 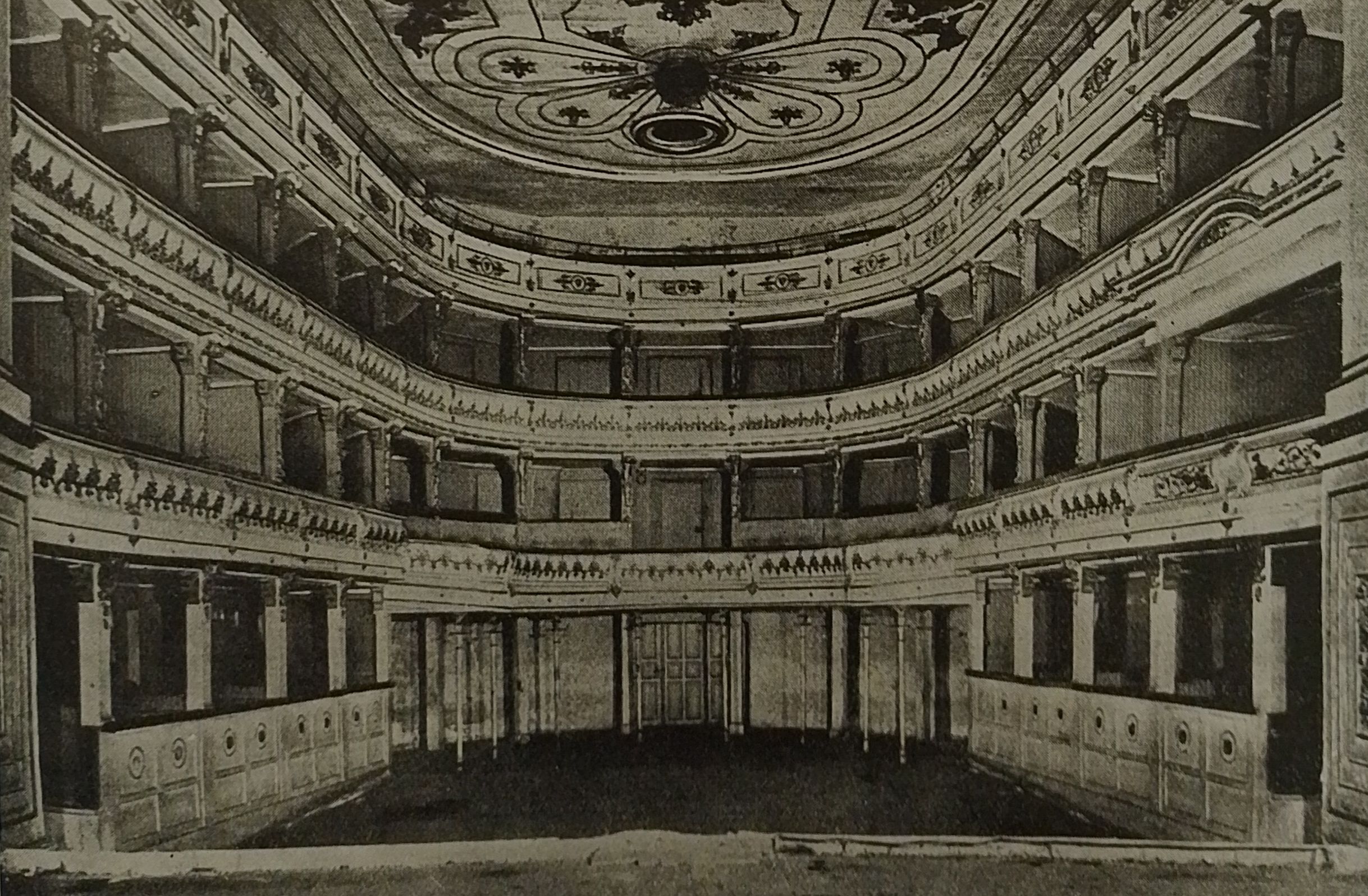 Gallery of the auditorium of the theatre (Source: Frigyes Pogány (ed.): Monuments of Budapest I.)

The theatre was opened on 16 October 1787, i.e., 235 years ago. During its existence, it hosted many famous events, for example, on 25 October 1790, the first performance in Hungarian was presented here, performed by László Kelemen's theatre company. Ten years later, on 7 May 1800, Ludwig van Beethoven played a concerto. Both events are commemorated by a plaque next to the entrance. Although it was renovated several times, its condition had already become dangerous by the beginning of the 20th century, and in 1924 a part of the gallery collapsed. As a result, the performances were discontinued, and in 1943, both the auditorium and the stage were dismantled.

The former church reopened its doors to the public in 1978 after the damage suffered during World War II had been repaired. The monastery was used by various offices until in 2014 it was transferred to the Prime Minister's Office. At that time, it was remodelled and renovated according to the plans of Gábor Zoboki, and was put into use at the beginning of 2019.