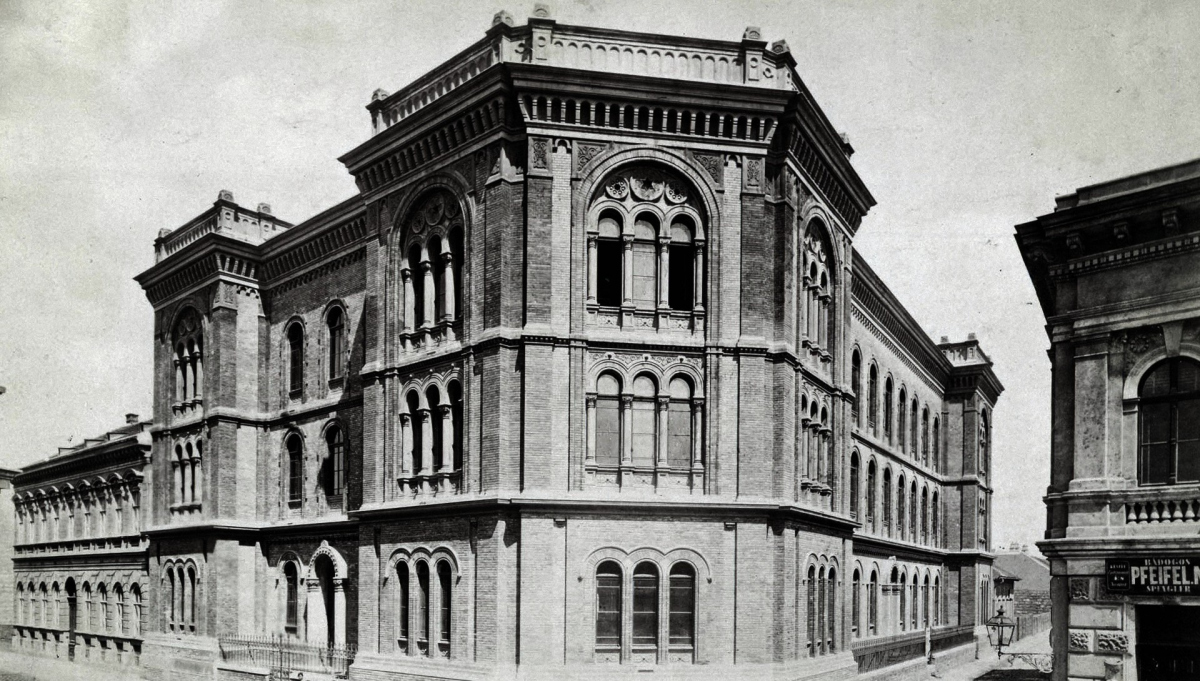 The rabbinical seminary opened its doors in Budapest 145 years ago 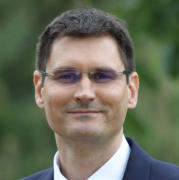 In Budapest, at the corner of Bérkocsis and Bodzafa Streets in the Józsefváros district - at the intersection of today's Gutenberg Square, Scheiber Sándor and Somogyi Béla Streets - in October 1877, a solemn event took place that was rare even in the world of the time. The rabbinical seminary, in which Israelite students began their studies, opened its doors to the Hungarian Jewish people.

The opening of the rabbinical seminary in Budapest in 1877 was made necessary by the fact that the Jewish denomination did not have any modern schools in Hungary that could have provided the institutional background for rabbinical training. In researching the political and financing background of its foundation and structure, we have to look back to the time of the 1848-49 revolution and the war of independence. 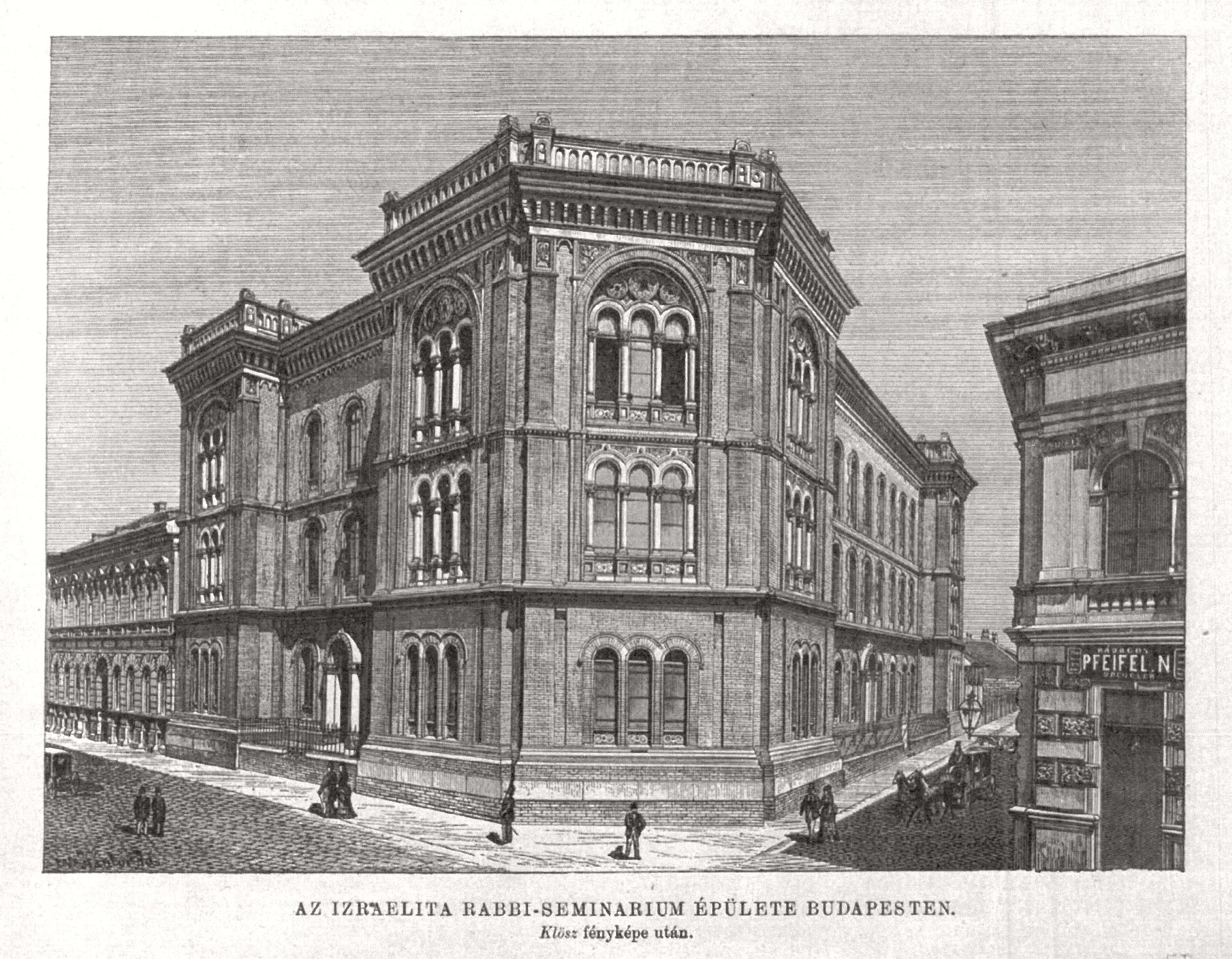 Hungarian Jews supported the revolution, as it provided them with the libertarian equality of rights and civil rights of the time, as they lived within different social constraints until then. After the war of independence was drowned in blood, Field Marshal Haynau imposed war on the Jewish communities as punishment. After replacing the general, Emperor Franz Joseph decided to return the sums received from the war front to those who were entitled to it. But this did not mean the repayment of the money to the oppressed communities, but, according to the original ideas, the establishment of an Israelite school fund, from which a rabbinical seminary would have been founded in Vienna, the centre of the empire. 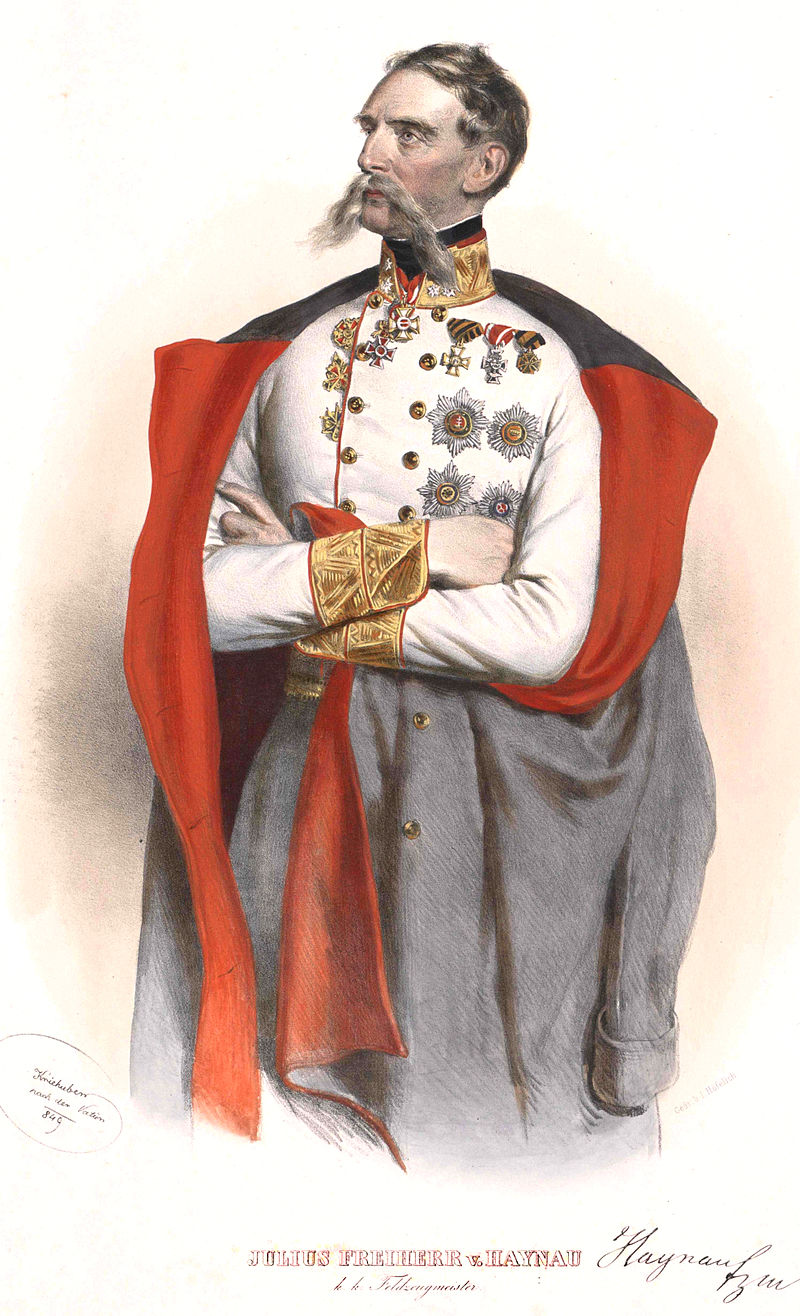 Field Marshal Haynau, who defeated the 1848-49 War of Independence, contributed to the financing of the construction of the Rabbinical Seminary against his will (Source: Wikipedia)

However, after the Compromise, Baron József Eötvös, the Minister of Religion and Public Education of the Andrássy Government (1867–1871), consulted with King Franz Joseph that the rabbinical seminary should be built in the Hungarian capital, not Vienna. After the death of Eötvös, his successors, ministers Tivadar Pauler and Ágoston Trefort at the head of the Ministry of Culture followed this path. The latter, while a strong orthodox-neological debate was unfolding within the Israelite denomination around the foundation of the institution, moved forward steadfastly towards the realisation of the objective. This is how the educational institution, known at the time as the "Rabbinical Seminary", opened its doors on 4 October 1877. 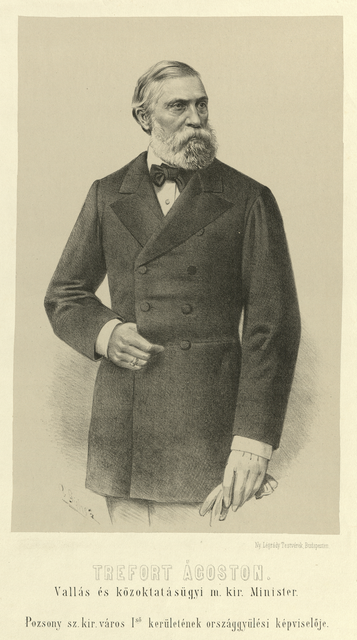 Ágoston Trefort, Minister of Religion and Public Education, during whose ministry the Rabbinical Seminary was planned and built (Source: Wikipedia)

The rabbinical seminary was built as a result of the joint work of three architects. The Ministry of Religion and Public Education delegated Ferenc Kolbenheyer, the Ministry of Transport and Public Works Vilmos Fest, and the National Jewish Office delegated architect Vilmos Freund for the design and construction work and supervision.

The press reported on the amount of the construction investment and the pre-calculated cost of the institution's operation. According to this, the plot was purchased for 40,000 HUF, the material and labour costs of the construction amounted to 190,000 HUF, and the equipment and furnishing amounted to 25,000 HUF. The annual maintenance costs were estimated at 20,000 HUF. 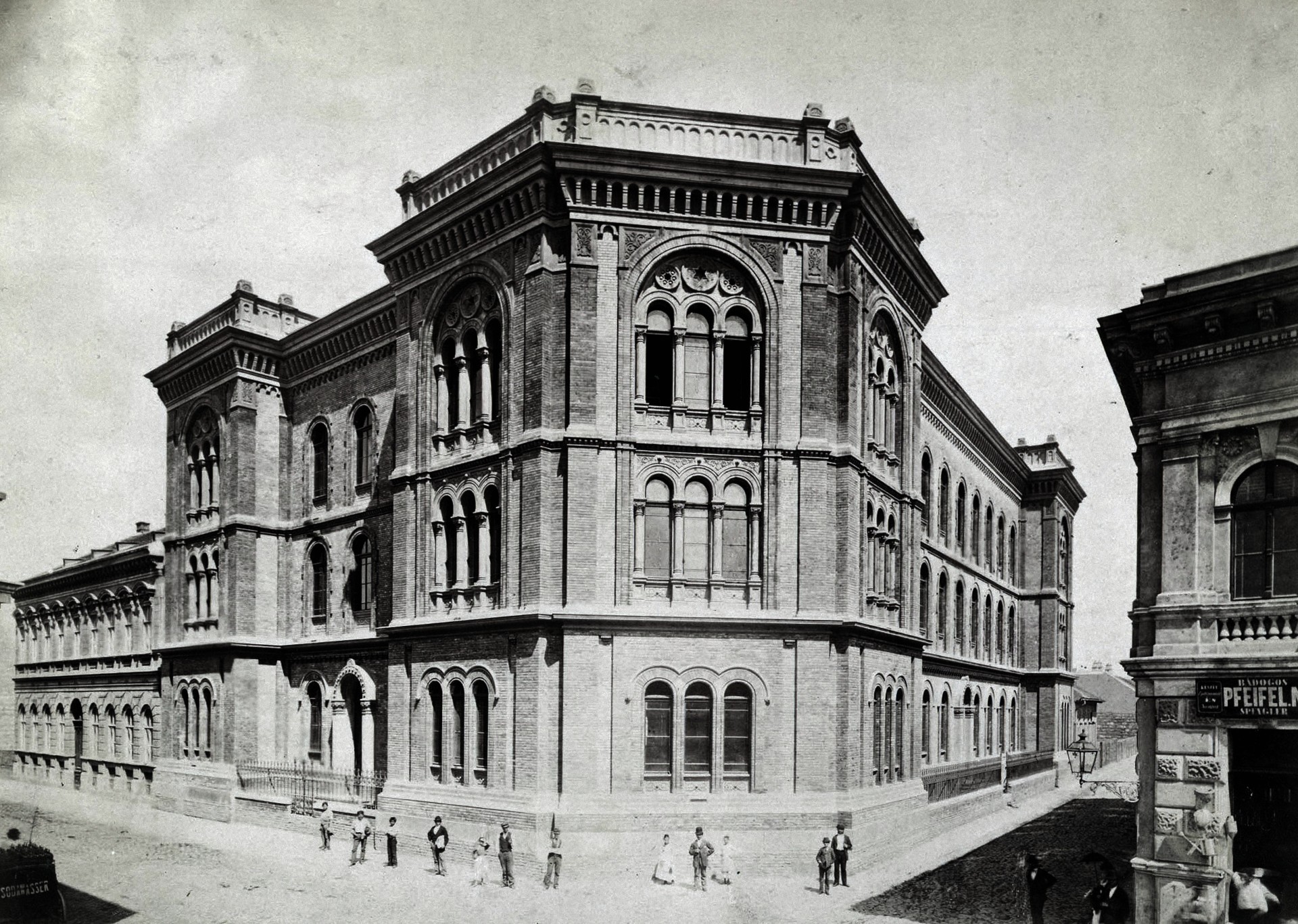 The earthwork, stone carving and masonry work of the red brick building were carried out by Diescher and Schmidt. The carpentry work was given to the Gregersen company, and the iron casting and blacksmithing work to Schlick Részvénytársulat. The tin work, the plumbing and water heating installation tasks were done by Zellerin, the "city gas piping" by Pesti Légszesz-Vállalat, the glazing tasks by István Forgó, the installation of the interior spaces by carpenter Ferenc Wälder. All contractors won the contract in the framework of an open tender procedure.

Back then, the narrow streets known as Bérkocsi and Bodzafa were already built with Neo-Renaissance buildings. The red brick, two-story building was built on the corner of these two streets, with a bastion-like corner facade, with its huge arched windows overlooking today's Gutenberg Square, and the prayer hall was located on the first and second floors of it. The library was placed on the left wing of the building (facing today's Somogyi Béla Street), the material of which was created by purchasing the collection of the Della Torre Library in Padua, and the classrooms were created in the right wing. The belt cornices that run around the walls and separate the levels, the cantilevered design of the projecting main cornice, and the balustrade located on top of the corner bastion-like protrusions are reminiscent of the Renaissance style, while the building also bears the marks of Art Nouveau and Orientalism. 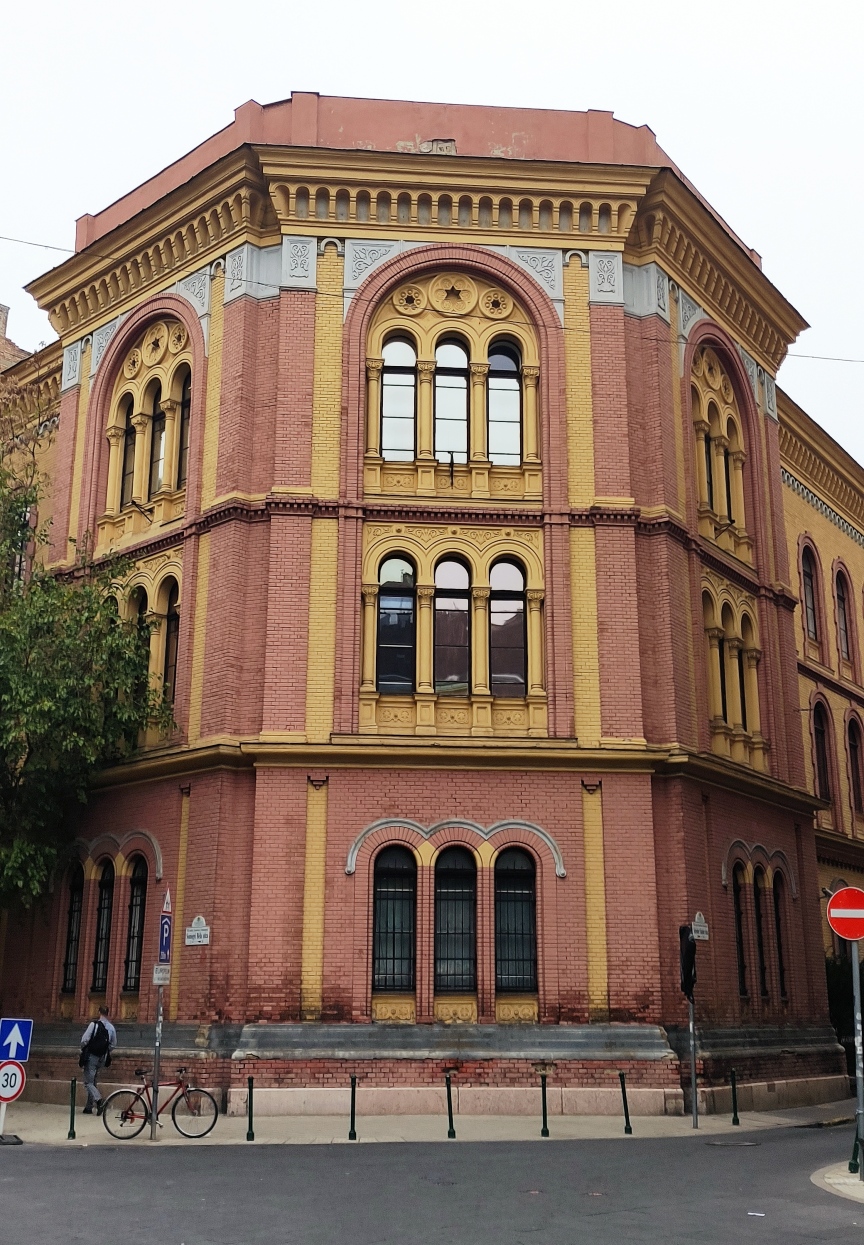 Readers were already informed about the preparations for the opening on 4 October well in advance. "Many Hungarian settlements and foreign Jewish boards are sending representatives to Budapest on this occasion. The committee organising the ceremony will send out the invitations in the next few days. So far, only the ministers and the two houses of the legislature have been invited," reports A Hon on 30 September 1877.

At the opening, Dr Sámuel Kohn, rabbi of Budapest, and chairman of the institute's steering committee gave a ceremonial speech, which was also published in the next day's edition of the daily newspapers. 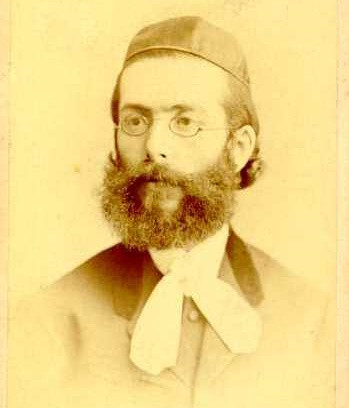 Sámuel Kohn, the rabbi of the Dohány Street synagogue, and the leader of the neologism movement gave the inauguration speech and then led the institution's delegation to the king (Source: Wikipedia)

The rabbinical seminary already operating in Boroszló (Wrocław), Czech Republic, was represented by famous teachers, and welcoming and congratulatory telegrams were received from the Israeli communities and their schools in Berlin, Brussels and London. No delegates from Saint Petersburg, Russia came to the inauguration because it was impossible to travel out of the tsar's empire due to the Russo-Turkish war raging on the Balkan Peninsula, so they could only express their appreciation by telegraph. A work of fiction was even created for the occasion: "Simon Bacher published a Hebrew poem entitled 'Nevéh Sálóm, a béke hajléka' [My name is Salóm, the abode of peace]. The work was published beautifully at the printing house of Schlesinger and Wohlauer", it can be read in the 17 October 1877 issue of the newspaper A Hon.

The opening of the rabbinic seminary sparked a debate between representatives of neologism and orthodox schools of religion. "Rabbi training among the Israelites, according to traditional ancient custom, does not take place in public institutes, but in their own colleges assigned for this purpose, like the minister-training institutes of the various Christian denominations. Most of the Jewish rabbi candidates are taught by some scholarly rabbis, who continue their rabbinic training privately in their own homes, introducing their students to the mysterious, obscure and winding labyrinth which describes the Talmud, an enormous collection of religious studies that detail, and further explains the scriptures. Such private rabbinical schools of individual scholars and more or less recognised rabbis are called yeshivas. In our country, there are about half a hundred rabbis who run yeshivas, or who teach and train young people aiming for the office of rabbi in the sciences deemed necessary for their future office", wrote the Vasárnapi Ujság on 7 October 1877, on the occasion of the opening of the rabbinical seminary that how the teaching of future rabbis looked among Jews, while the priests of Christian denominations obtained qualifications and diplomas in higher theological schools.

The festive atmosphere did not end with the opening of the gates on 4 October, as Emperor and King Franz Joseph arrived in Budapest in the last days of the month and held an interrogation in the royal palace in Budapest. "The committee of the Hungarian national rabbinical seminary was there. […] On behalf of the delegation, Dr Kohn handed over the gratitude of the Hungarian Israelites for setting up the seminary and asked his majesty to honour the institute with a high-ranking visit. His Majesty's answer was: »I am convinced of the loyalty and patriotism of the Hungarian Israelites. I expect the most salutary and most useful from the opened institute; I will take a visit.« His Majesty also asked the members of the delegation about the premises of the rabbinical seminary and the number of students so far." This is how the daily newspaper A Hon informed its readers about the audience. 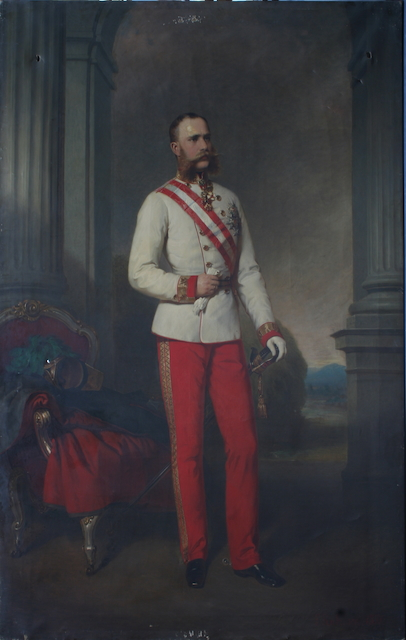 In the fall of 1877, among the scholarship applications of the National Israelite Encouragement Award Society for "poor Hungarian students of the Jewish religion", it was already possible to submit an application for the support of studies to be carried out at the rabbinical school. At the same time, a new aid fund was established. "The following donations were made to the aid fund for underprivileged students of the national rabbinic seminary: Leo Holländer (Eperjes) 1000 HUF, Ignácz Eisenstädter of Buziaș (Temesvár) 1000 HUF, Ignácz Schreiber (Győr) 1000 HUF, Antal Steinfeld (Debreczen) from late Mihály Steinfeld's Foundation 1000 HUF, Henrik Guttmann of Gelse (Nagy-Kanizsán) 500 HUF, Henrik Rosenberg (Kis Czell) 200 HUF and Ede Mandel (Nyírbátor) 100 HUF. In addition, several announced significant donations and several smaller annual contributions,” wrote A Hon on 6 October 1877. Additional monetary donations and entire book collections offered by private individuals have also arrived. 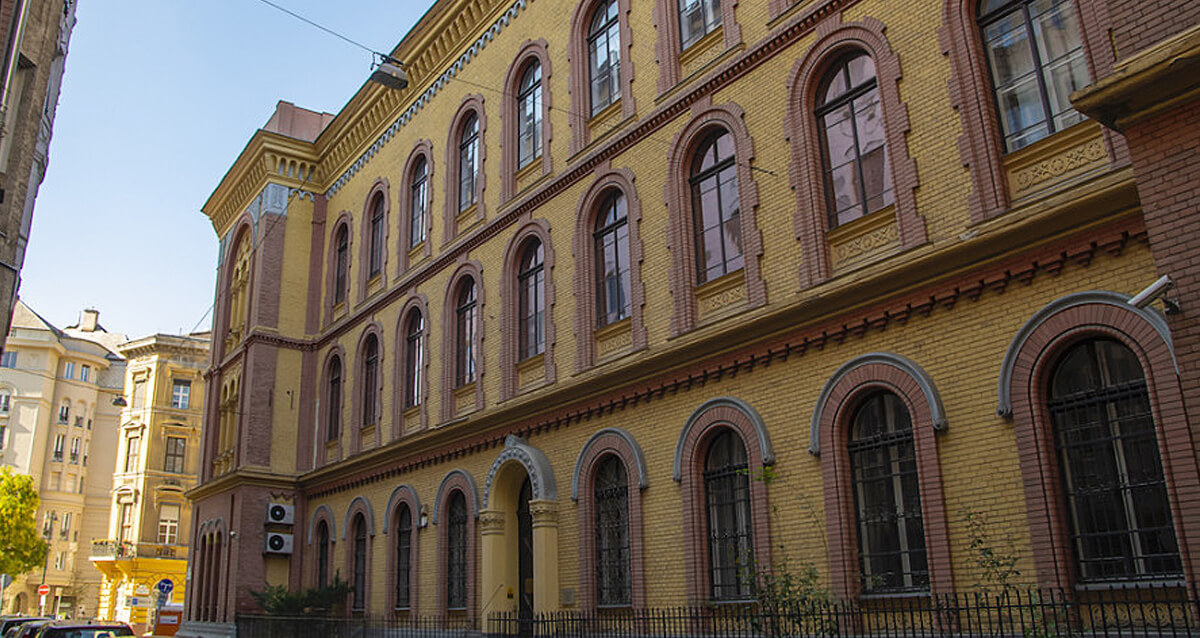 During the German occupation in 1944, the SS took possession of the school and set up a relocation camp in it, from where masses of Jews were taken to death camps. Apart from this horrible period, the building has always functioned as a rabbinical seminary.

During the renovation of the building in 1962, a plaque commemorated the fact that the walls of the institute were built from Haynau's indemnity: "This building was created from the indemnity that Haynau imposed on the Hungarian Jews because of their participation in the 1848-49 war of independence."

The Jewish Theological Seminary – University of Jewish Studies (OR-ZSE) still operates within its walls. The university proudly announces on the home page of its website: "The predecessor of our university was founded in Budapest in 1877. This makes OR-ZSE the oldest rabbinical seminary in continental Europe that is still operating today."