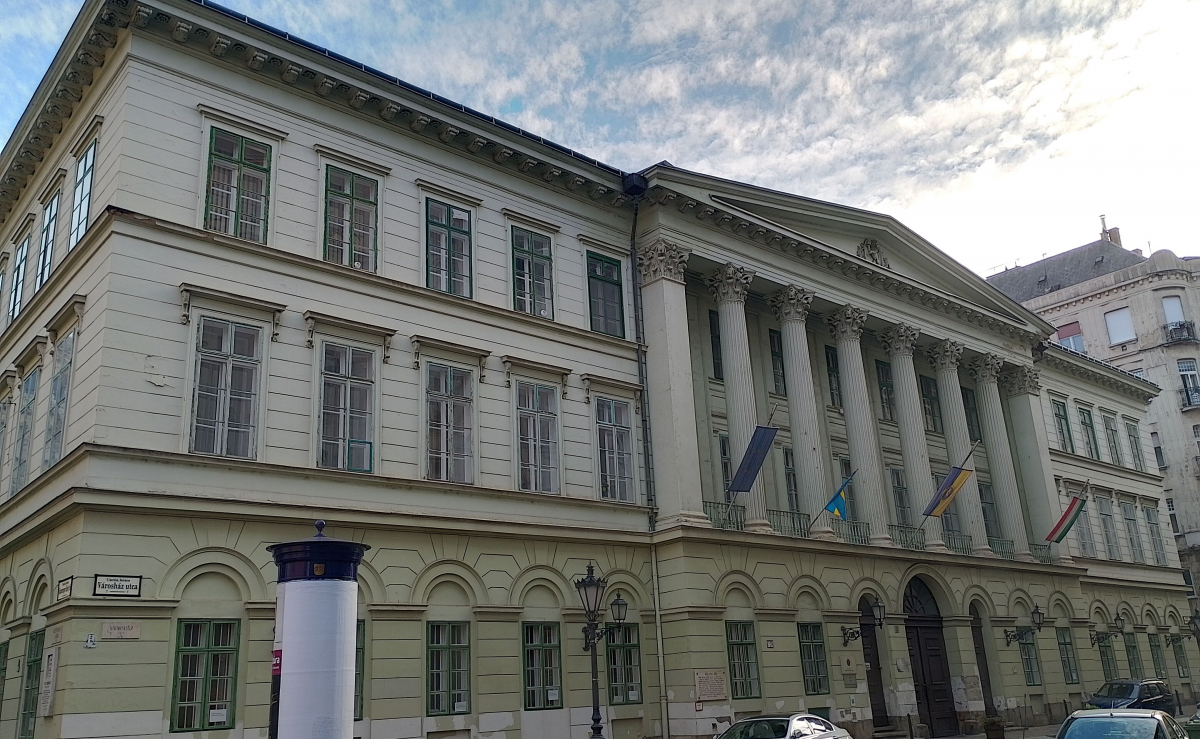 Whose masterpieces were demolished: Mátyás Zitterbarth Jr. died 155 years ago

The development of a large city is always accompanied by the demolition of buildings, as old ones are replaced by new ones that already meet modern needs. Mátyás Zitterbarth Jr., who created in the first half of the 19th century, largely fell victim to this phenomenon. However, he was a brilliant architect, which is proven by the fact that the mayors of the city of Pest entrusted him with the design of important public buildings. Pestbuda now presents his demolished and still-standing works.

He was born in a family of Austrian origin in 1803 in Pest. Several of his ancestors were active in the construction industry from the end of the 18th century. His father, Mátyás Zitterbarth Sr., also worked as an architect in the future capital, which began its development at this time. The gates of the city wall were demolished at the end of the 18th century, thereby creating the possibility of the development of a modern metropolis. The booming construction industry offered a secure livelihood, so the younger Mátyás continued the family tradition and entered the career of an architect himself. He continued his studies in Vienna and then visited German and Italian territories to gain experience. 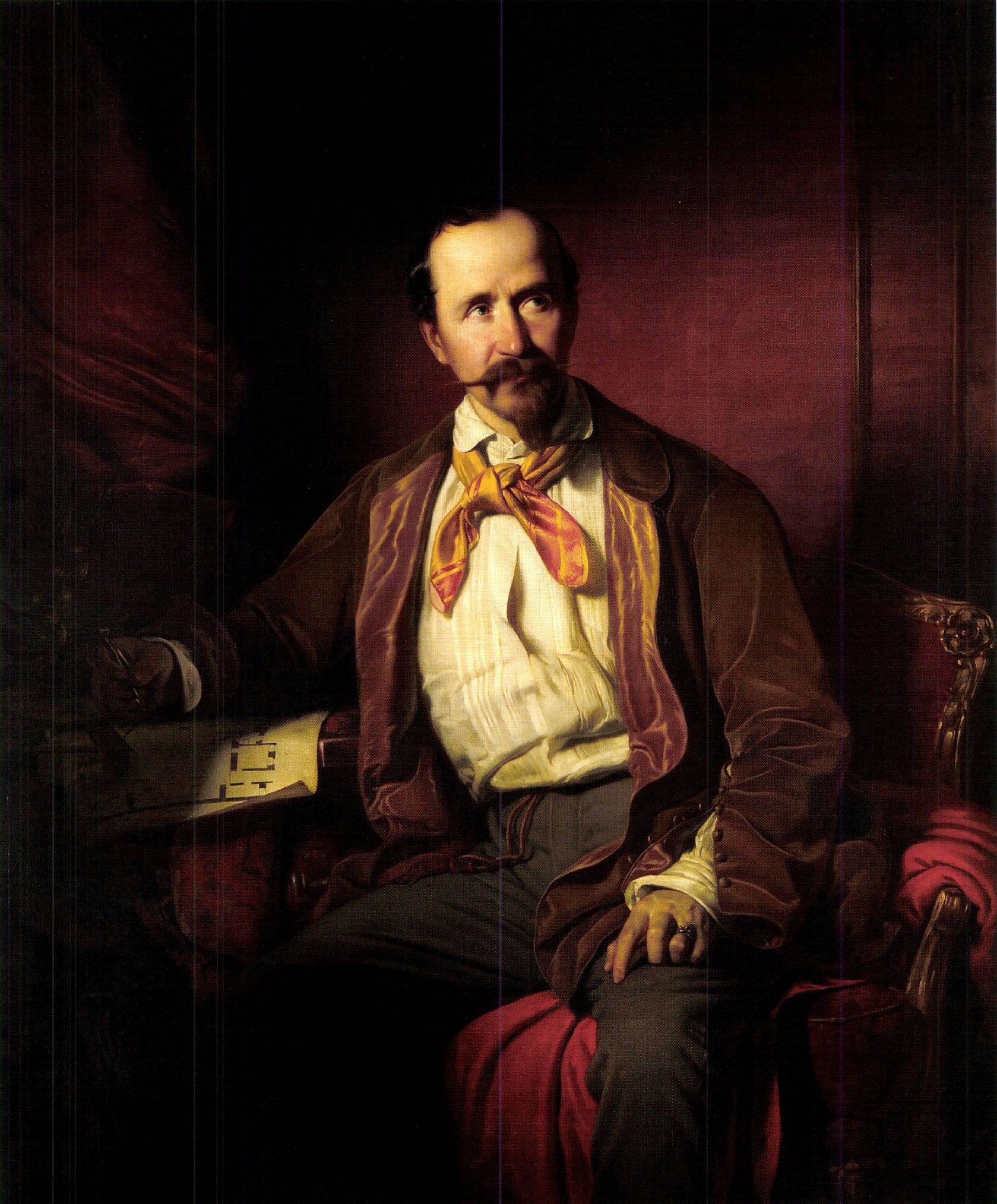 He was in his mid-twenties when his first buildings were completed, which, in fact, along with almost all his later buildings, he designed in a Classicist style. His first truly significant work was the Hungarian Theatre of Pest, built between 1835 and 1837, at the corner of today's Múzeum Boulevard and Rákóczi Road. At that time, a theatre was already operating in Pest - the German Theatre, which once stood on today's Vörösmarty Square - however, the strengthening of national consciousness during the reform era demanded that the audience could also listen to Hungarian-speaking performances.

With the support of the county nobility and thanks to the organisational work of Deputy Lieutenant ('alispán') Gábor Földváry, it was possible to create the necessary financial background for its implementation, although Zitterbarth, who drew up the plans, had to manage with much smaller resources than Johann Aman in the case of the German Theatre. The location was not that prestigious either, in fact, it was outside the city at the time. The result was simpler, yet elegant: the longer leg of the building with a rectangular floor plan was parallel to the Boulevard, and the main facade was placed on the shorter side facing Kerepesi (now Rákóczi) Road. Its prototype was the Odéon Theatre in Paris. 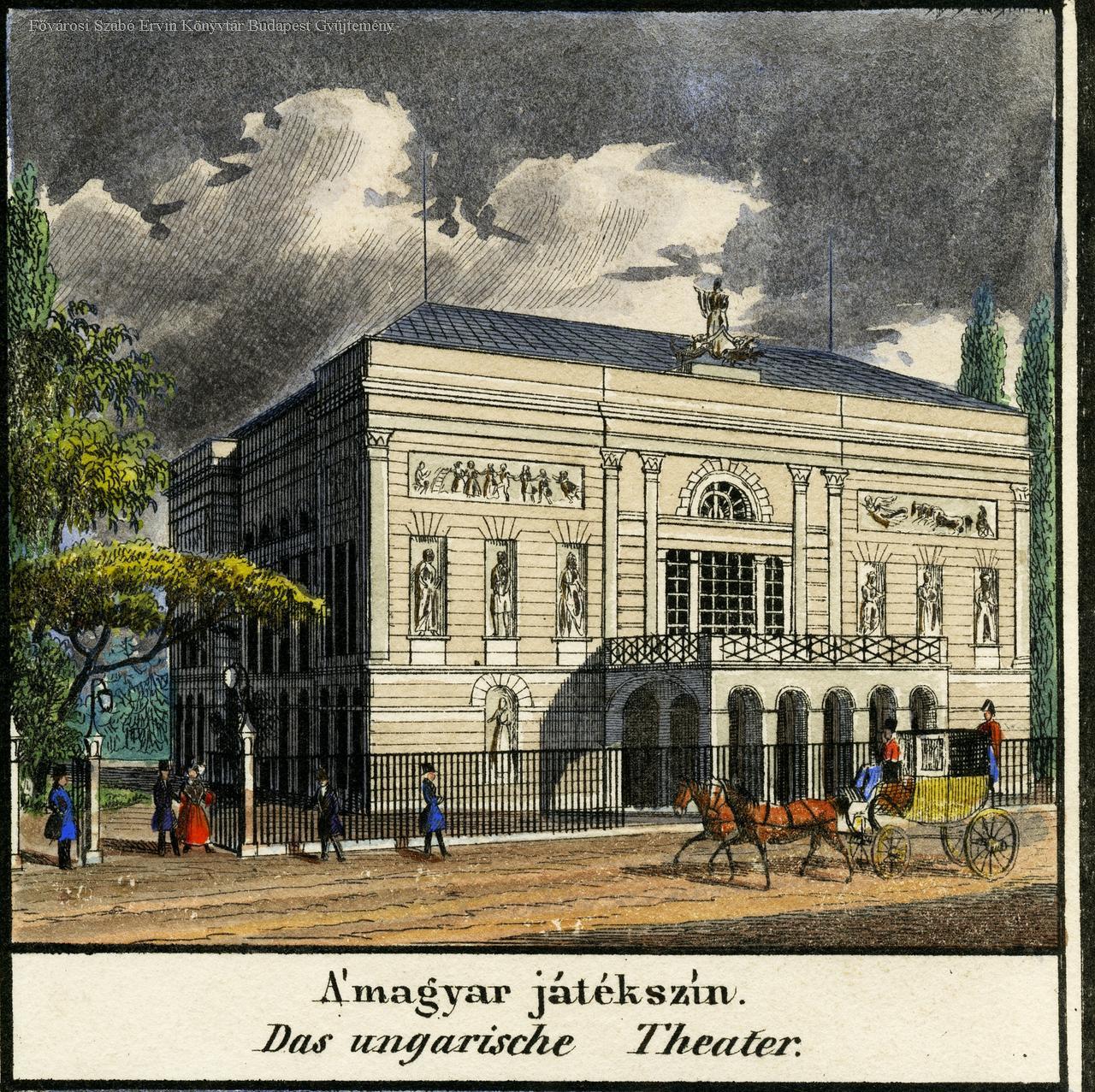 Its entrance opened behind a semi-circular archway with a row of arcades, on top of which a terrace was created. The most impressive part of the facade was the surface behind the terrace, where smaller columns separated the exit doors, and above them, light poured in through a large, semicircular window. This central unit was closed at the top by the main cornice crowned with a high attic, which was supported by large columns with Corinthian capitals.

The edges of the main facade were enlivened with lines on both the ground floor and the upper floor, and sculpture niches were also created on it. Large, standing statues were placed in these, and wide, reliefs of multiple people were placed in the upper parts of the facade. Its ceremonial opening took place on 22 August 1837. It was already visited by the public when the parliament of 1839-1840 placed it under patronage, at which time it took on the name of the National Theatre. 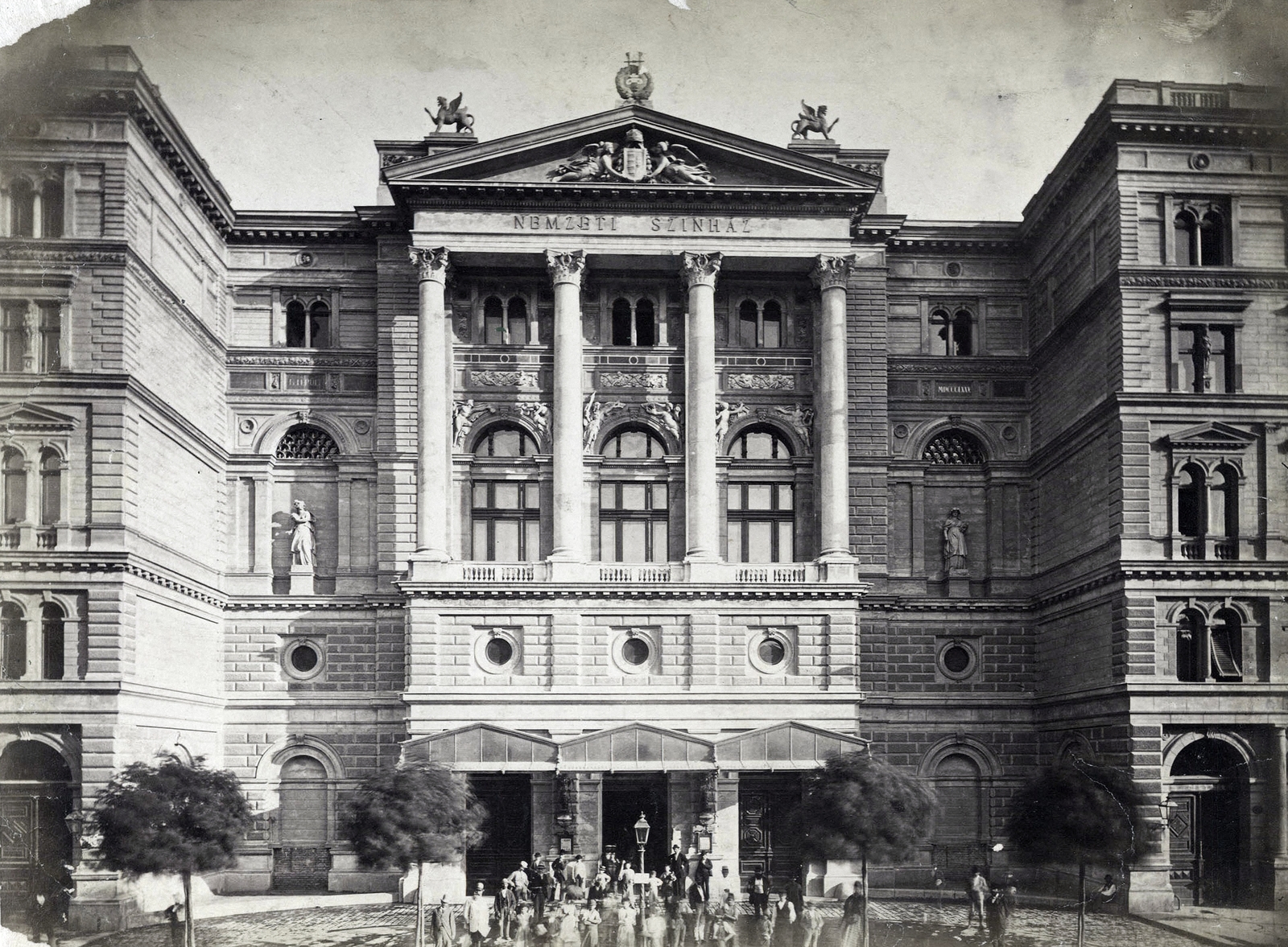 After the Compromise - when more attention was again focused on our national institutions - the theatre was also remodelled: according to the plans of Antal Szkalnitzky, a monumental gate (portico) was built in front of it between 1873 and 1876. To increase its income, it was extended with residential wings on two sides, of which the one overlooking the corner was decorated with a dome. However, the interior did not change significantly, so Zitterbarth's signature did not disappear, it was still present for decades. However, the condition of the theatre continued to deteriorate, until in 1913 it was decided to demolish it. The ground floor of the residential building overlooking the corner was left behind, and the stump remained in the city centre area for decades. 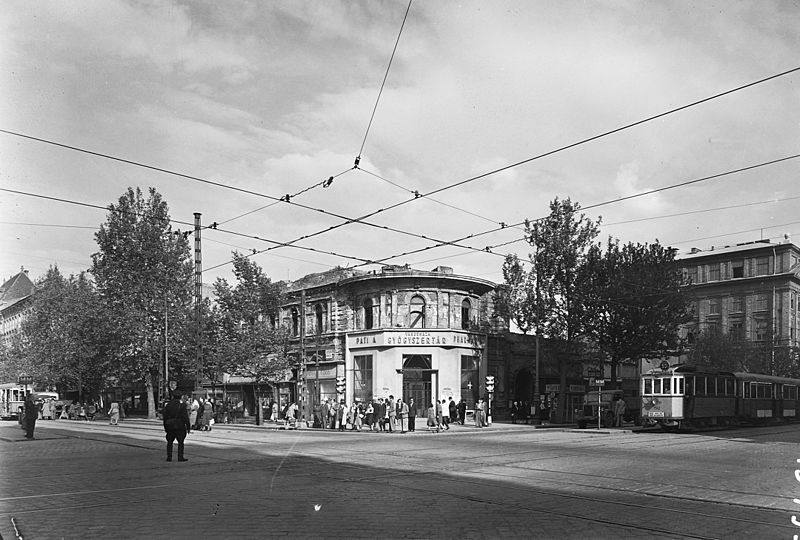 The intersection of Astoria with the row of shops in the residential building (Source: Fortepan/Reference Nr.: 3718)

Zitterbarth gained recognition at a young age with his excellently designed building, and further enhanced the family's reputation as an architect. That is why in 1838 after the devastating flood had receded, he was asked to continue the construction of the County Hall in Pest. The construction of this venue for noble meetings began at the beginning of the 19th century, and according to the plans of József Hofrichter, the building wing overlooking today's Semmelweis Street was completed between 1829 and 1832.

Zitterbarth was entrusted with the construction of the tract connecting from the west, which faces today's Városház Street. He transformed the two-story main facade into something similar to the Classicist city palaces of the time, fitting in with the trend created by Mihály Pollack and József Hild: its middle section steps forward slightly (forming a risalit), and this was emphasised with columns with Corinthian capitals spanning the two levels, and a triangular tympanum at the top. Symmetrically, four window shafts were placed on the two edges. 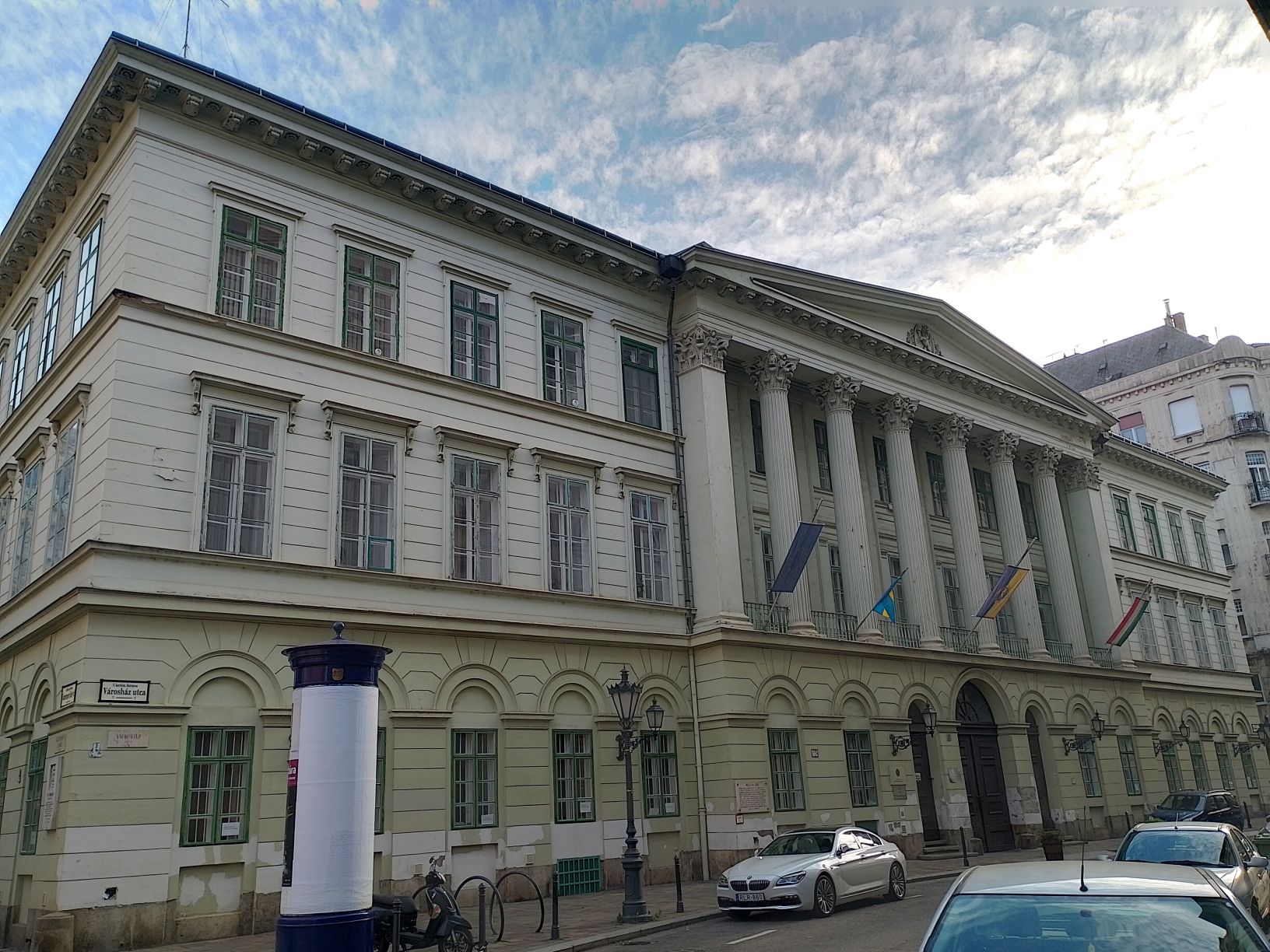 Of course, the main entrance also opens in the central risalit, which closes in a semi-circle at the top. Above this, at the foot of the columns, a balustraded balcony was created. The windows of the building, on the other hand, have a simple, upright rectangular shape, although those on the ground floor are complemented by a semi-circular wall space, thus creating a harmonious system with the entrance. The windows on the first and second floors are crowned by slightly projecting hood moulding.

The rectangular courtyard of the Pest County Hall also shows a calm, regular overall image typical of Classicism, which also rhymes with the layout of the main facade: on the ground floor, a row of arcades with semi-circular closures runs along it, and on the first and second floors, in the rhythm of these openings, columns with Tuscan capitals stand and support the hanging corridors. The dignified block of buildings, which dominates the narrow street lavishly, was completed in 1841. Its current address is 7 Városház Street and it is used by the Pest County Government Office. 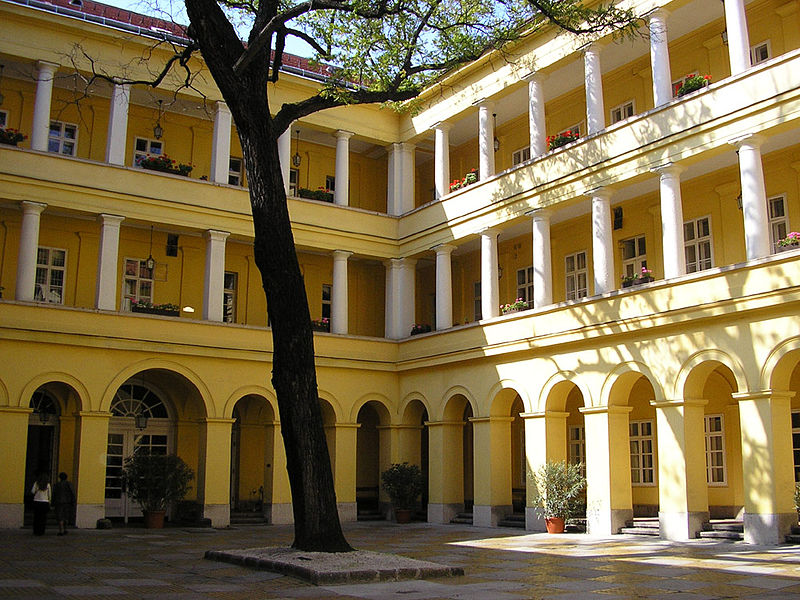 The courtyard of the former Pest County Hall (Source: hu.wikipedia.org)

Zitterbarth also designed two social-purpose buildings in the 1840s. The Institute for the Blind was commissioned in 1841, and it was built the following year on the corner of Király and Gyár Streets. The centre of the institute used to be located in this area, on the site of today's Academy of Music, but it was destroyed by the flood of 1838. The collection for its reconstruction soon began, but it still took four years before they had their own home again. Zitterbarth designed this specifically for educational purposes so that up to a hundred blind people can be cared for at the same time. They mainly accepted children who, in addition to general knowledge, also received vocational training in music.

Since there was already a significant demand for their services, he planned the new building to be much larger, with two floors. Its main facade faced Király Street, and a triaxial section slightly advanced from its centre, the levels of which were supported by Corinthian capital pillars. Apart from this, the building was characterised by the puritanism of Classicism, it avoided decorations, and hood mouldings were placed only above the windows with straight tops. It was demolished in 1901 so that the Academy of Music could be built in its place. 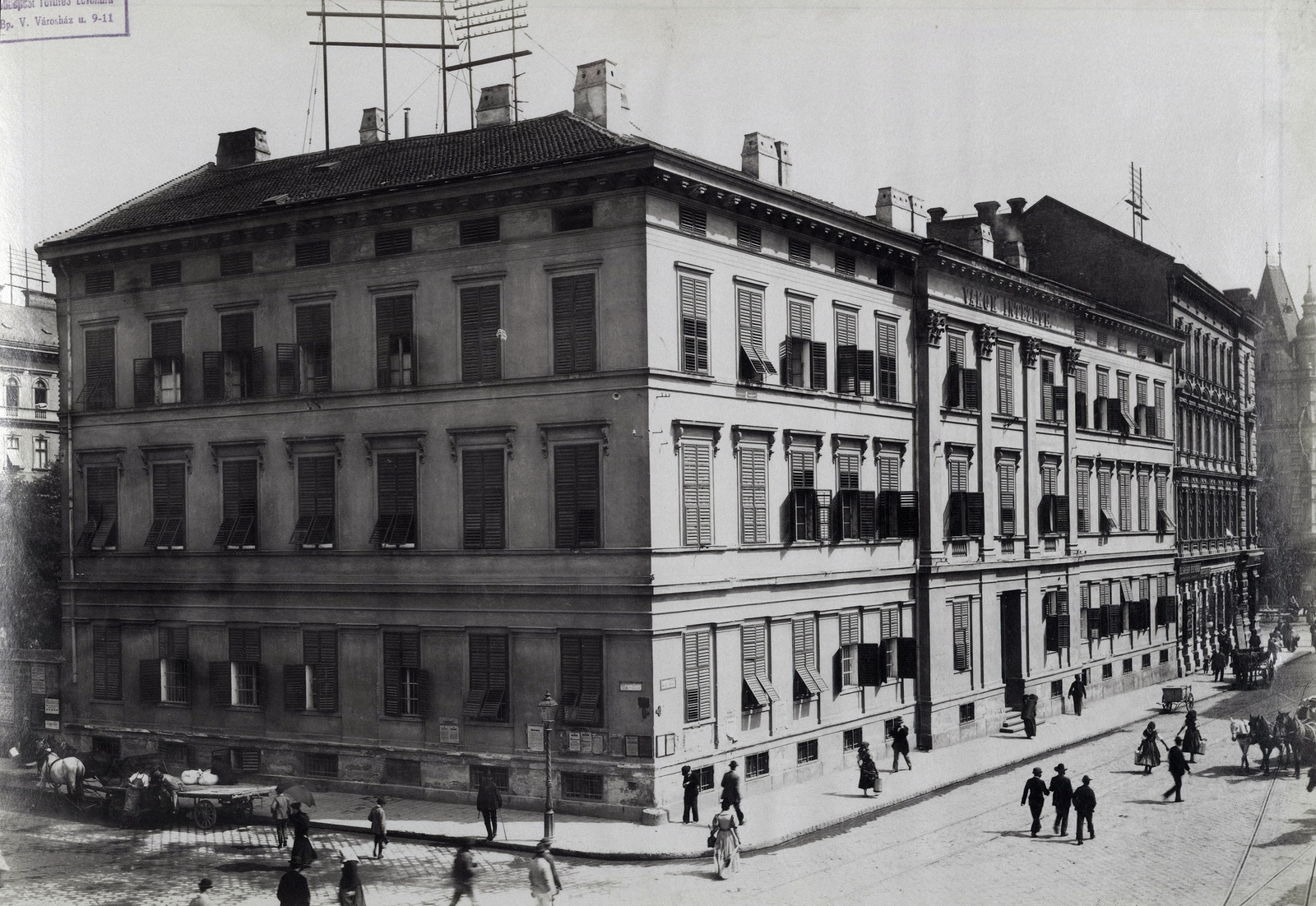 The building of the Institute for the Blind on the corner of Király and Gyár Street (Source: Fortepan/Budapest Archives, Reference Nr.: HU.BFL.XV.19.d.1.07.069)

Founded by medical professor Ágost Schöpf-Mérei, the Pest Paediatric Hospital for the Poor began its operation in 1839 in Ötpacsirta (today Puskin) Street, but the rapidly increasing number of patients justified the construction of a new, larger building within a few years. The location was the beginning of Ősz (today Szentkirályi) Street (today 4 Szentkirályi Street), where Zitterbarth designed a one-story, classicist hospital in 1845. Its main entrance opened in the middle of the symmetrical facade, and the name of the institution could be read in both Hungarian and German on the ledge between the two levels. In 1883, the Apollo Literary and Printing LLC [Apolló Irodalmi és Nyomdai Reszvénytársaság] moved into the building, and now there is a modern apartment building in its place. 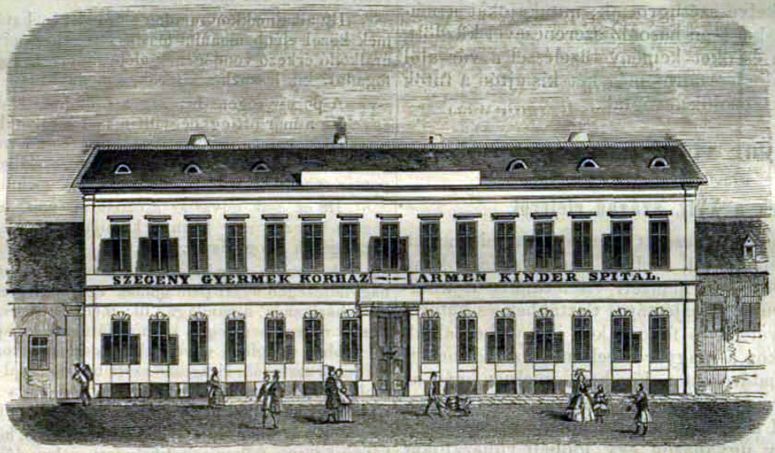 In addition to large-scale commissions, he also undertook smaller tasks, for example, in 1846, he designed factory buildings near the country's first railway building, the Pest Station Building: round-houses, warehouses, and workshops. In addition, residential buildings were not left out of his repertoire, an elegant example of this building type that is still standing today can be admired at 16 Arany János Street. This building also highlights that towards the end of his career, romanticism did not leave him indifferent either. 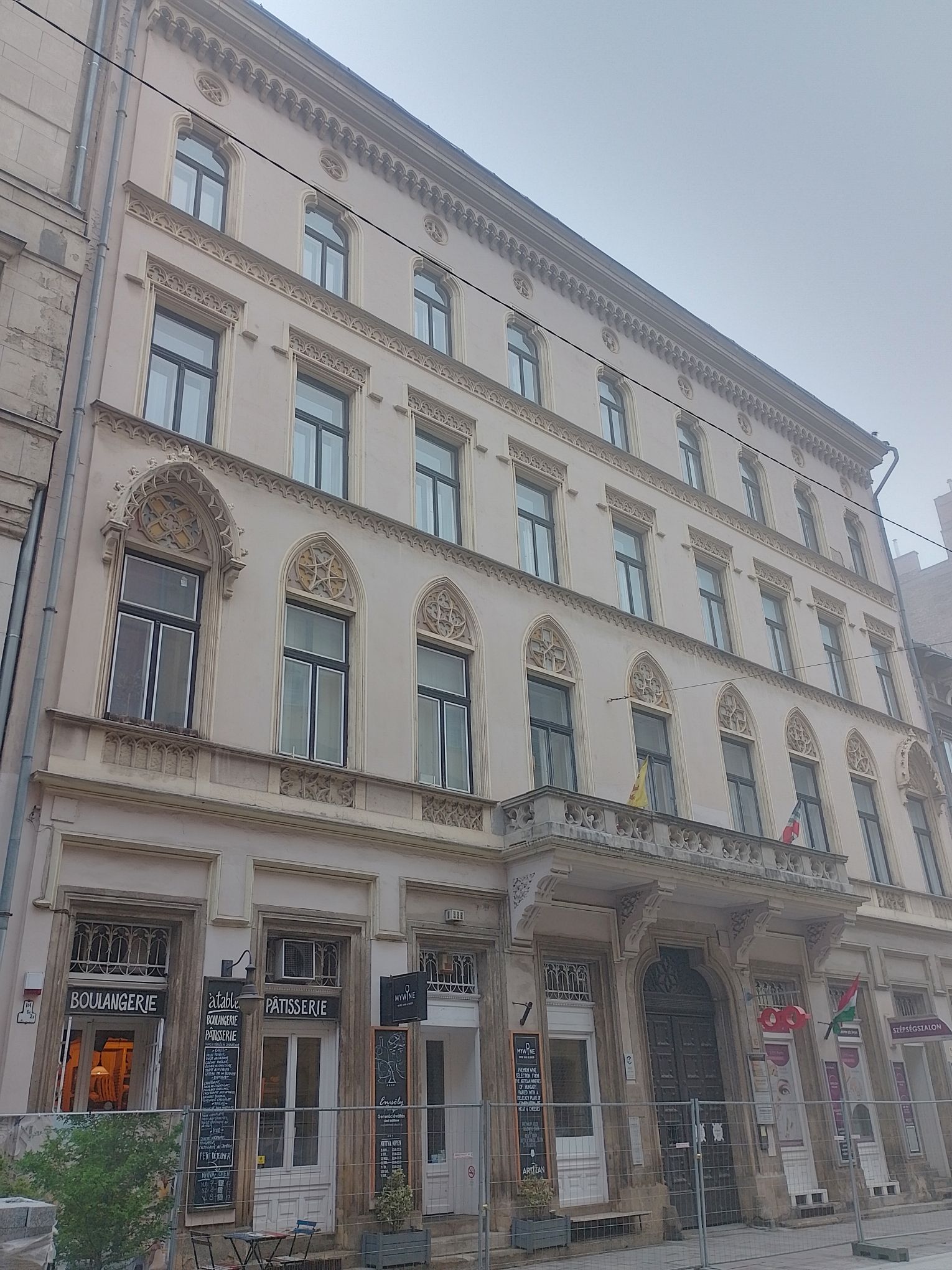 Professional success did not make him selfish, which is proven by the fact that in 1848 he voluntarily joined the Pest-Buda Cavalry National Guard, where he served first as a captain and then as a major from the end of September. Fortunately, he was not injured during the imperial occupation of the capital, so after the recapture of Buda, he joined the national guard again, this time as commander-in-chief.

After the end of the War of Independence, he worked as an architect again, but in addition to planning, he also worked on construction, for example, his company carried out the foundation work of the Citadella in the early 1850s, during which a huge amount of stone and earth was brought down from Gellért Hill on cobblestone tracks. 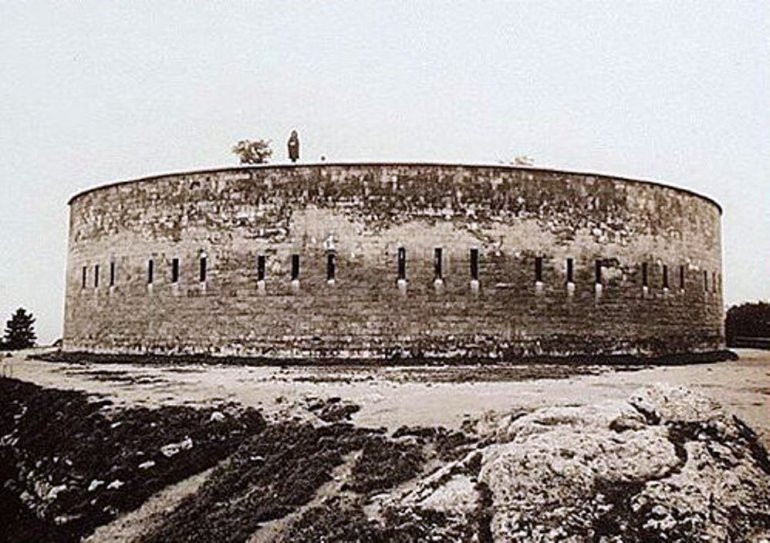 The foundation work of the Citadella was carried out by Zitterbarth's company (Source: NSZL Digital Image Library, Nr.: 027687)

The influence of romanticism could already be felt in his smaller works designed at the end of the 1850s. Still, Mátyás Zitterbarth Jr. entered the history of Hungarian architecture as the third most significant figure of our classicist architecture behind Mihály Pollack and József Hild. He died on 14 November 1864 in Pest.