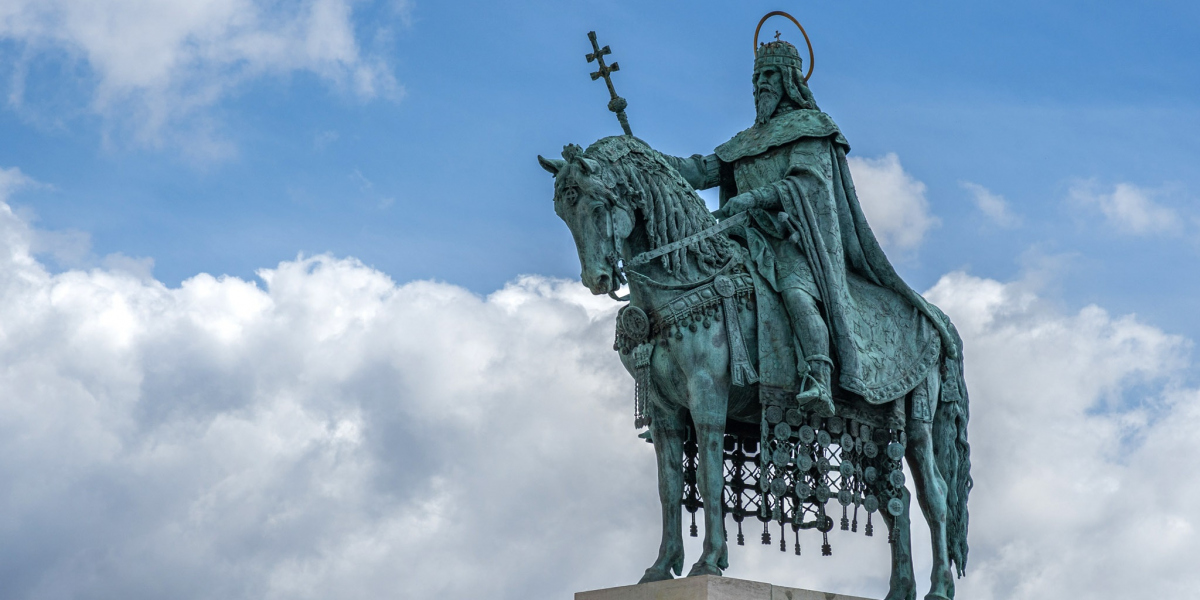 The statue of Saint Stephen has been standing in Buda Castle next to the Fisherman's Bastion for 115 years. Although the founding king of Hungary has always been highly respected in the country, the great work of Alajos Strobl was completed slowly. The first statue of King Stephen in Budapest was inaugurated in 1906 next to Matthias Church almost 40 years after it was first planned.

The cult surrounding Saint Stephen has always been strong in Hungary, and his feast day, also known as the State Foundation Day, is one of the greatest holidays in the country. In light of this, it is interesting that Hungary's founding king did not have a worthy statue in Budapest until the beginning of the 20th century. 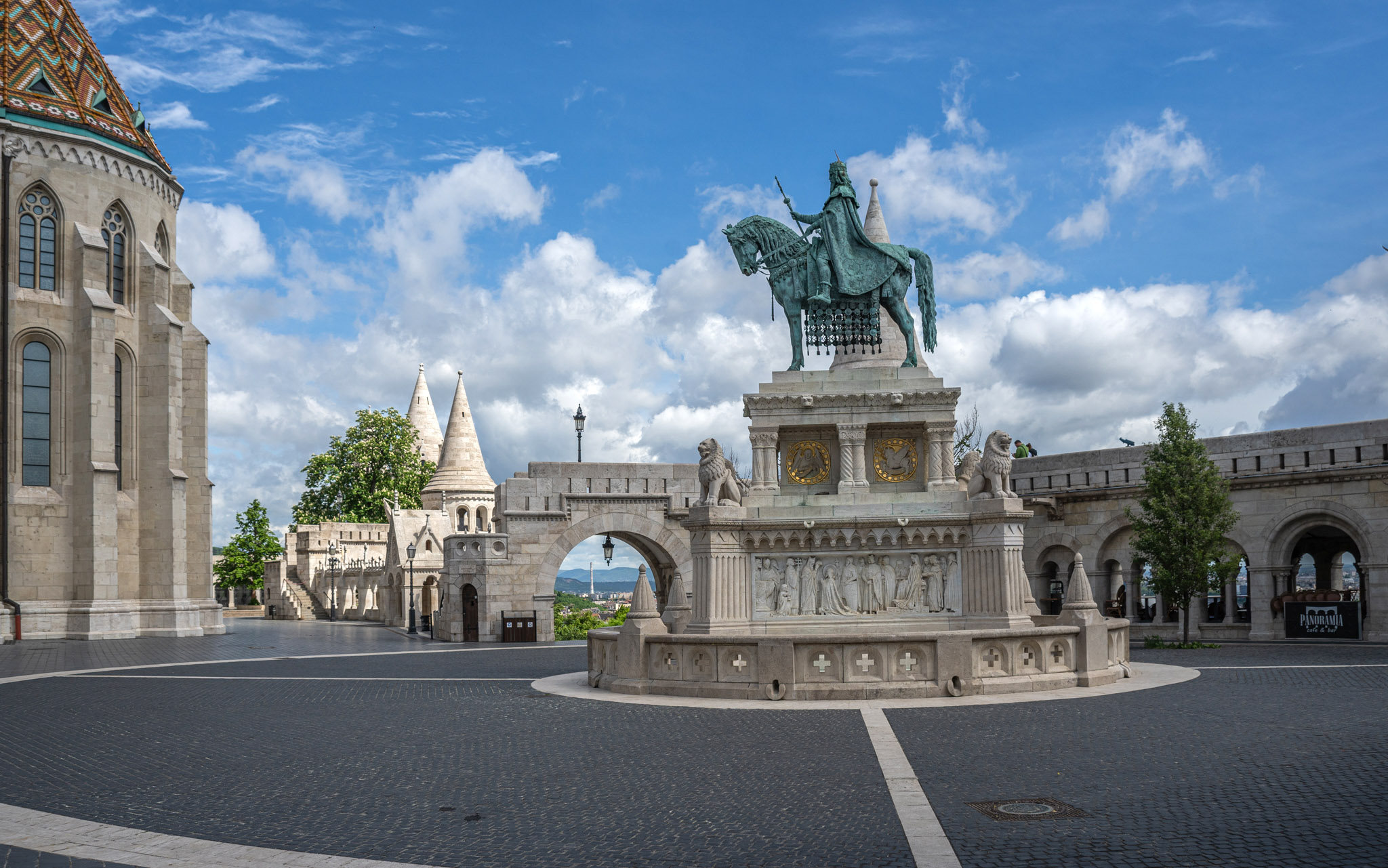 A decision was made in 1893 on the location and that the king was to be depicted on horseback and not on a throne (Photo: Balázs Both/pestbuda.hu)

Of course, this is not surprising since there were only a few statues in the capital at the end of the 19th century. The German emperor, Wilhelm II also commented on it to Franz Joseph, who guided him around Budapest. The king took this criticism so seriously that he paid for 10 works of art from his own money. However, the statue of Saint Stephen was not included because when the two emperors visited Budapest in 1897, the erection of the statue of the founding king was in full swing, and it had been dealt with for more than 40 years. A committee was set up in 1863 to erect a statue of Saint Stephen in Budapest, and the initiator was Count Móric Pálffy, the royal deputy. However, the fundraising was not successful at the time. 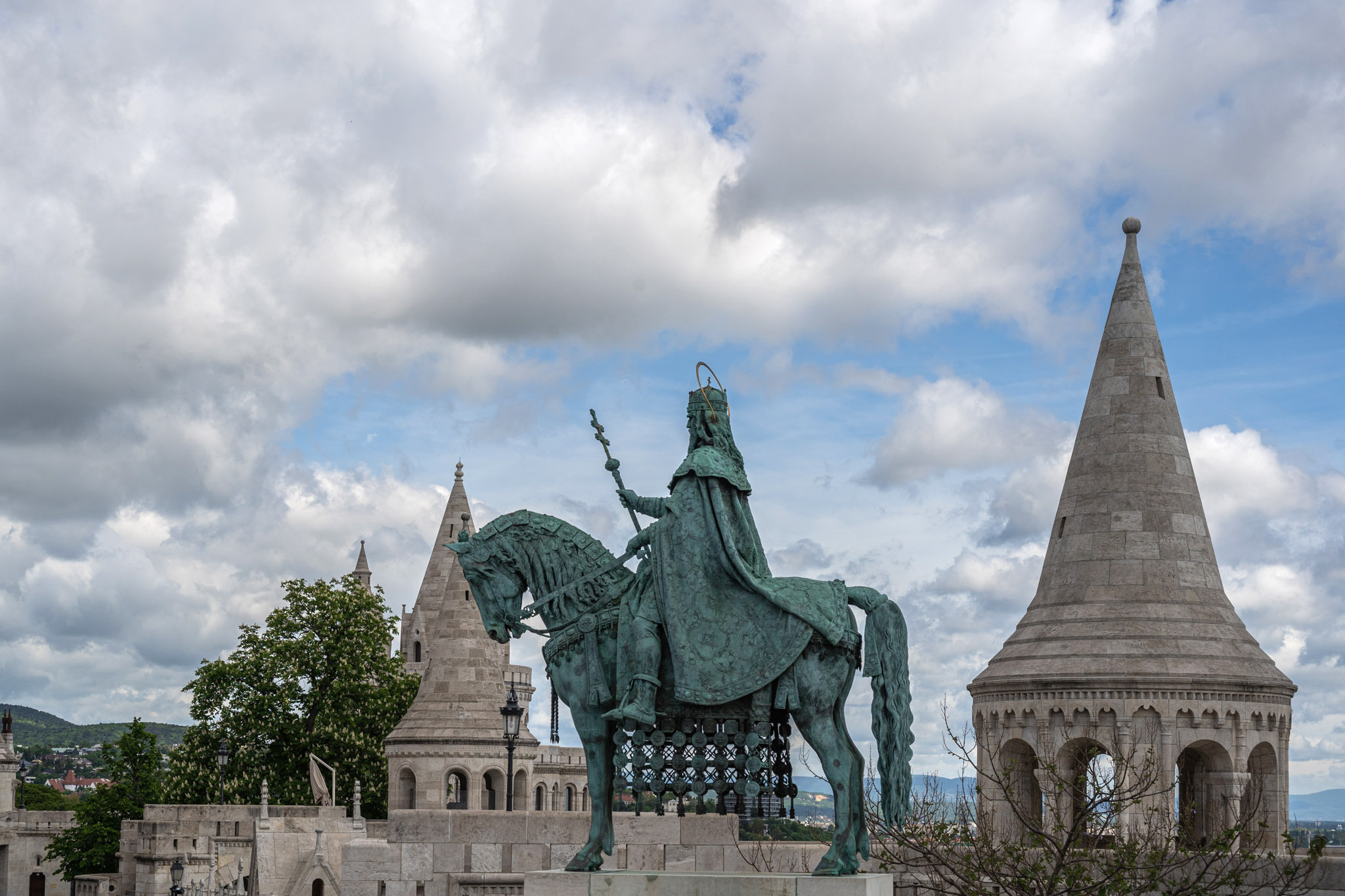 The experts and the king also had a say in shaping the details, which delayed the work (Photo: Balázs Both/pestbuda.hu)

The issue was later raised again in Parliament, of course in preparation for the anniversary of the founding of the state, the millennium. On behalf of the Minister of Religion and Public Education, the Council of Fine Arts created a subcommittee to prepare the statue in 1893. This committee recommended that the future statue should be placed next to the Matthias Church and that the king should not be depicted sitting on the throne but rather on horseback. Thus, the work began, of which the 12 December 1894 issue of the Pesti Napló reported:

“With regard to the erection of the statue of Saint Stephen, and the short deadline within which they want to erect the statue of the great king, again, only gives the impression that they want to make it in an underhand way, throwing out the tender conditions that have been in place for a year, and of which they have been waiting for an announcement in the Ministry of Religion and Public Education since. (…)

A strange surprise popped out of Pandora's box that Alajos Stróbl was already working on the plan of the statue of Saint Stephen. Pesti Napló asked: who gave him the commission?”

The contract with Alajos Strobl was actually concluded a little later - but months before the promulgation of the law ordering the erection of the statue – on 10 May 1895, which stated that the state would pay 101 thousand forints for the preparation of the sample, while the pedestal and the pouring of the statue would cost another 99 thousand forints. The additional cost of 100,000 forints covered the arrangement of the surroundings of the statue. Then, in 1896, i.e., 125 years ago, the Act of 1896, Article VIII., paragraph 1(c) was passed:

"[The legislature] will erect an equestrian statue of King Saint Stephen in the Fisherman's Bastion next to the Coronation Church named after Our Lady in Budapest." 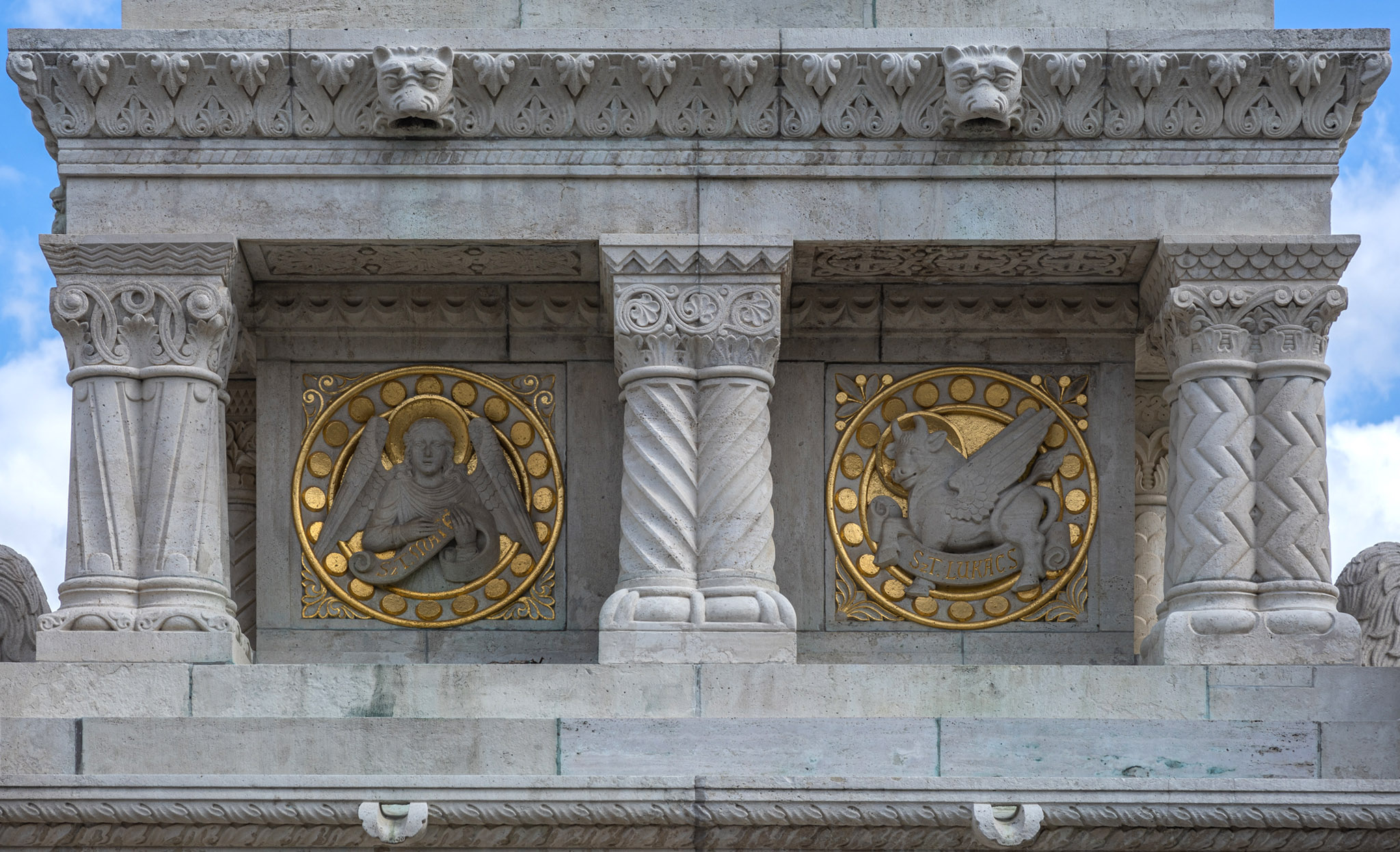 So, if there was the money and will, why did the statue take another 10 years to complete? The sample was not completed until 1901, as several people had a say in what Saint Stephen should look like. On the one hand, the experts of the National Council of Fine Arts, who suggested that the king be depicted with the Holy Crown on his head because it was not how Strobl depicted originally, and then Franz Joseph, who objected to the spear in the king's hands and asked the artist to replace it with a double-cross. 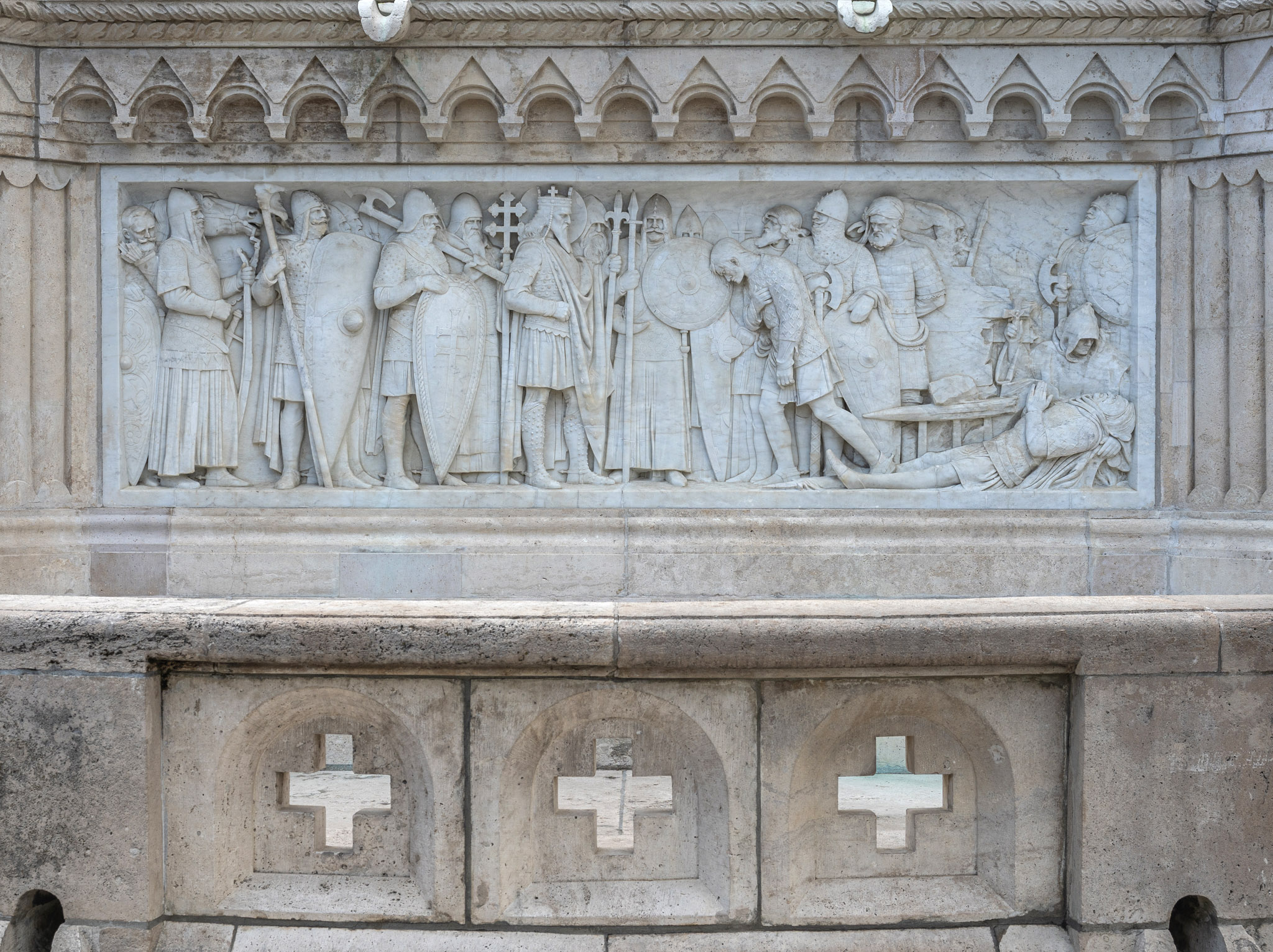 The reliefs running around the pedestal of the statue are also the works of Alajos Strobl (Photo: Balázs Both/pestbuda.hu)

The pedestal also changed, because while Strobl intended his work to stands on a low pedestal, Frigyes Schulek, who rebuilt the Matthias Church and the Fisherman's Bastion, imagined a tall structure in which reliefs - Strobl's works - show the most important episodes of Stephen's reign: the coronation, the passing of laws, the spread of the Christian faith, i.e., church-building and conquest, including the homage to Vienna. Perhaps a small nod toward the co-capital of the Monarchy was that the worshipping mayor was recognizably Karl Lueger, the mayor Vienna from 1897 to 1910. The statue was thus only completed in 1906. 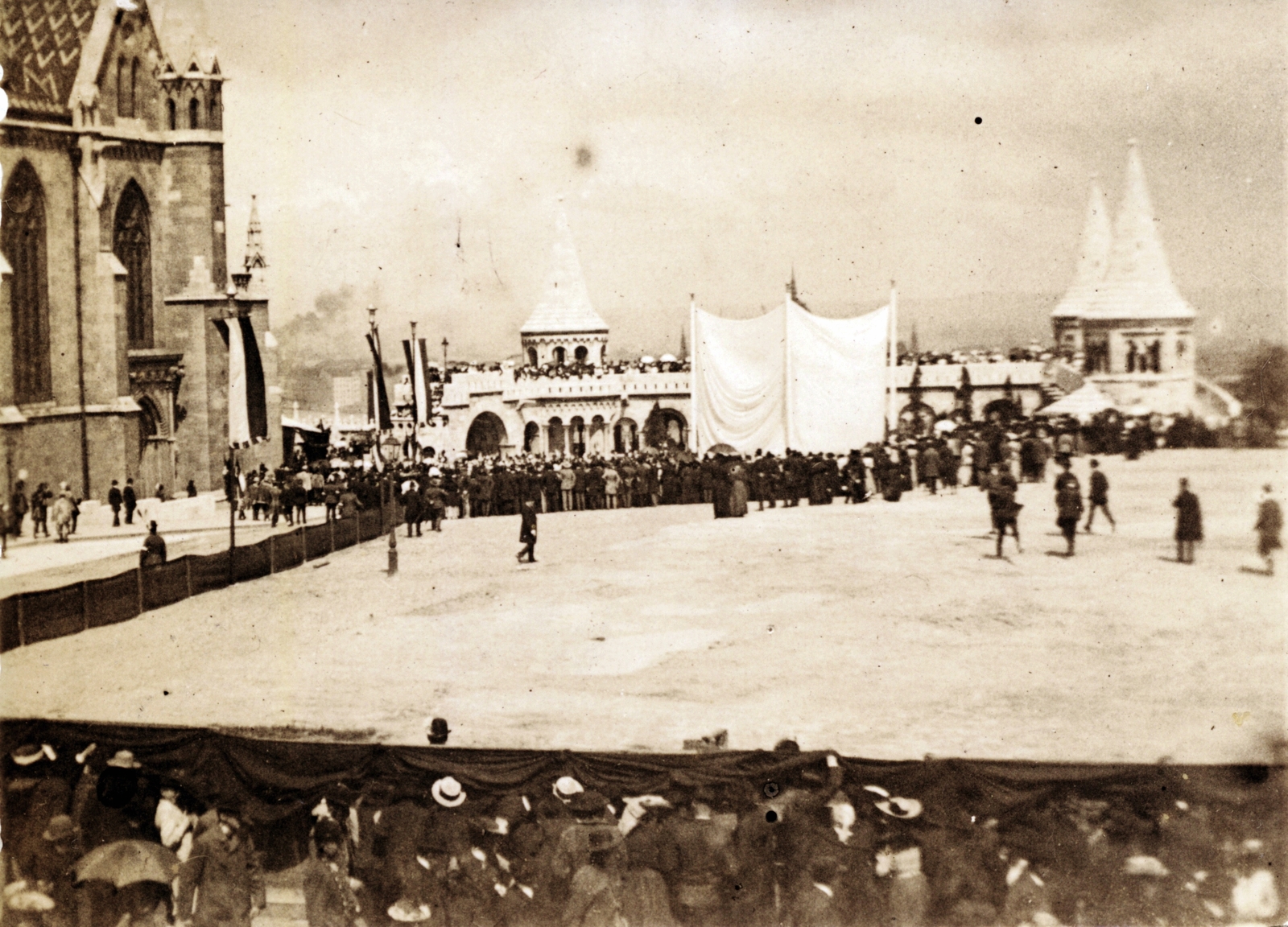 The inauguration of the statue was a huge event (Photo: Fortepan/No.: 115777)

The inauguration of the statue took place on 21 May 1906. It was a huge ceremony that even the king joined. The Vasárnapi Ujság praised the event in its 27 May 1906 issue:

However, not everyone liked the work. The 27 May 1906 issue of Uj Idők wrote:

“The figure of Stephen, on his bronze parapet, looks small when measured against the pedestal: in addition to the Gothic Matthias Church and the strong, massive bastion towers, both the horse and the rider look scrawny. If this is about the mass layout of the statue, it is doubly about the detailed solution. The real plasticity is obscured by the variegated web of goldsmith's works, brocades, tinsels, and tools and shows almost nothing of the horse and rider. It is not so much a monument as a magnified goldsmith's work with a thousand irrelevant ancillary works. The most offensive of these is the wire-glory above the king's head and the adornment of the horse's saddle cover, which hangs far down low in rich tufts and tiny fringes.”

Despite the judgement above, the statue has been standing next to the Matthias Church for 115 years, and thousands of tourists visit and read that the statue depicts Saint Stephen, the first Christian ruler of Hungary, whose memory has been cherished by the Hungarians for almost a thousand years.