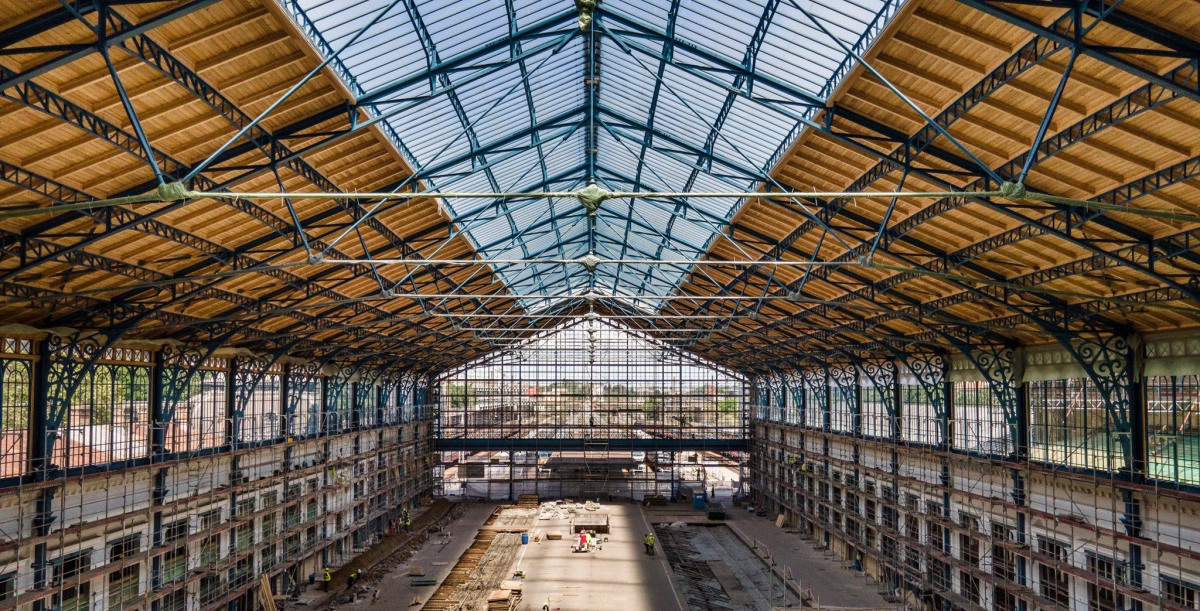 The renovation of the Western Railway Station, which started last year, has entered a new phase. After 95% of the passenger and track hall reconstruction has been completed, the whole building is now being closed for maintenance work on 19 June and will only reopen on 18 July. One of the busiest railway stations in the capital that handles 18 million passengers a year, was last renovated between 1978 and 1988.

Reconstruction of the Western Railway Station is entering a new phase: one of the most important railway stations in the country will close between 19 June and 18 July. At a press conference on its renovation on Tuesday, government spokesman Alexandra Szentkirályi said that 18 million people visit the station every year, who will receive better service thanks to the modernisation.

Alexandra Szentkirályi noted that since the beginning of 2021, carbon dioxide savings have been indicated on train tickets. “Whoever chooses a train instead of a car can save 131 grams of CO2 emissions per 1 kilometer,” the government spokesman said. 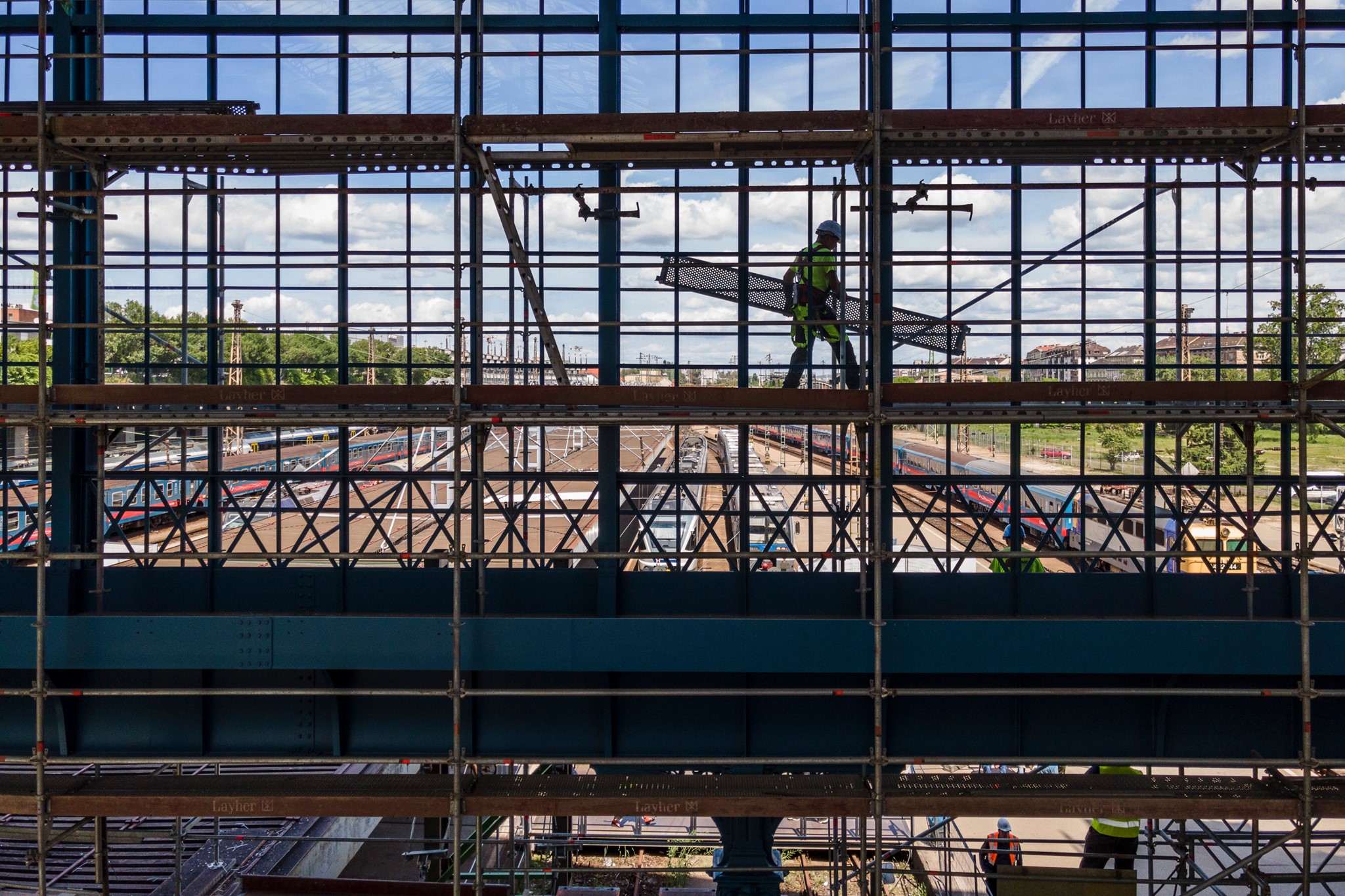 The roof structure of the hall is being renewed (Photo: MÁV)

Tamás Schanda, Parliamentary and Strategic State Secretary (ITM) of the Ministry of Innovation and Technology, also drew attention to the environmentally friendly nature of the railway, MTI adds. The secretary of state said that those travelling by train use an average of 71 per cent less harmful substances than those travelling by car. The Secretary of State said that the closure of the Western Railway Station could temporarily cause inconvenience to passengers, but he said it was worth seeing the plans, the progress of the work and the medium- and long-term outcome.

Renovation work at the Western Railway Station began a year ago. Over the course of these, 2200 square metres of the building's glass curtain wall, lighting and the entire rainwater drainage system will be replaced. During the project, 13 points and 1 track crossing will be replaced. Tracks are being constructed with heavy machinery on about 3,300 metres, and new asphalt is being laid on more than 16,000 square metres. The passenger information boards at the end of the platforms are being upgraded. In addition, the exterior of the building will be renovated.

Roland Juhász, Secretary of State for the Management of Public Property in the Prime Minister's Office, said the government's declared goal is to make rail transport the backbone of public transport. In 2021, the government will support MÁV's competitive railway program with 20 billion HUF. The creation of the MÁV-Volán Group was a huge step towards the efficient operation of companies desired by the government to manage public transport efficiently. With the integration, the largest public transport service provider and employer in the country was established. 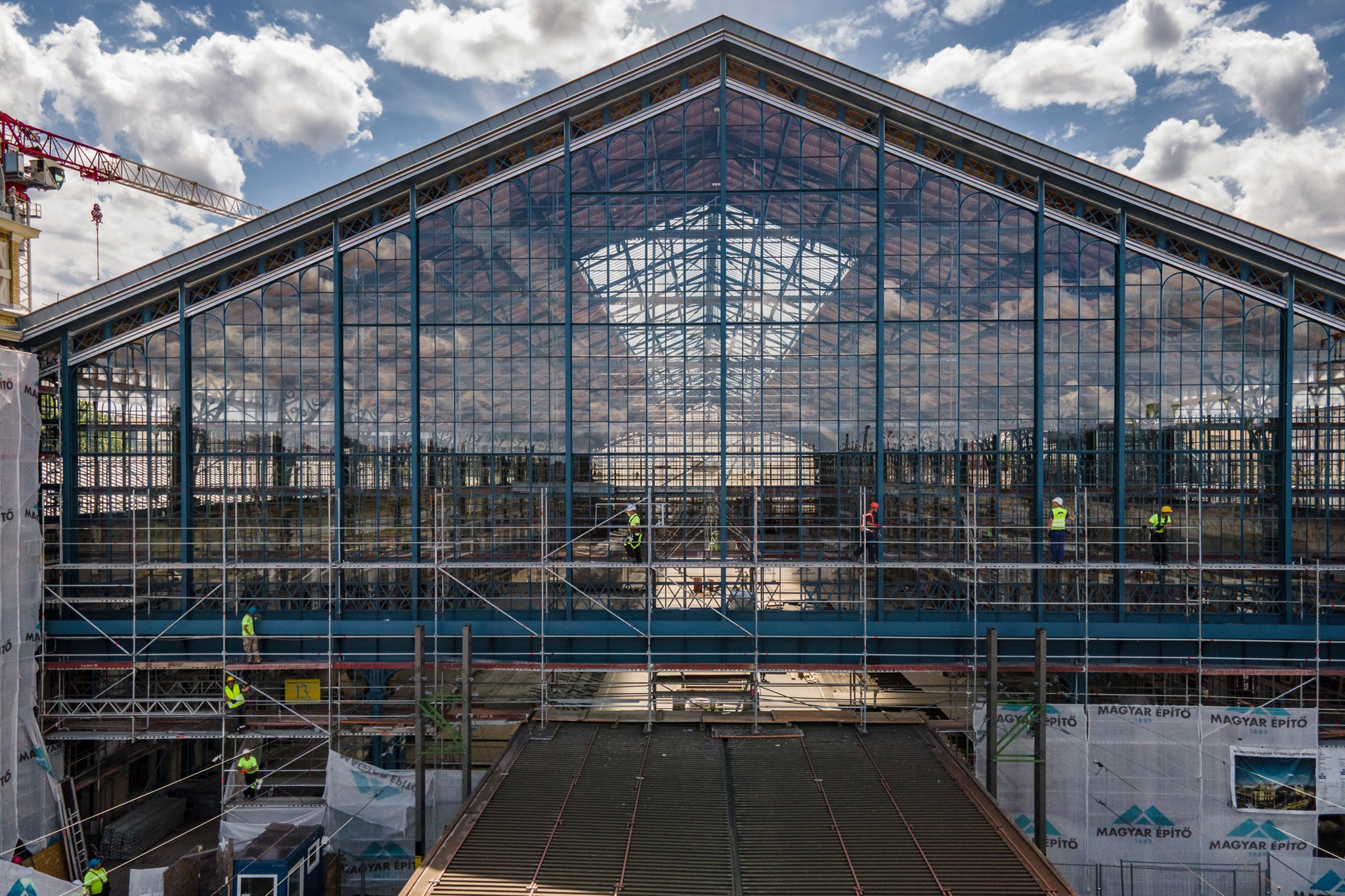 At the railway station, the glass curtain wall, the lighting and the complete rainwater drainage system will be replaced on 2200 square metres (Photo: MÁV)

According to MTI, Róbert Homolya, President and CEO of the MÁV-Volán Group, said that in the renovation of the Western Railway Station, which started last year, the passenger and track hall was 95% completed. The investment has reached a critical stage with the complete exclusion of train traffic from 19 June to 18 July due to maintenance works.

Special attention is being paid to informing passengers about the changes in train traffic. For example, 40 large information boards and boards mounted on pylons have been installed in the Nyugati Railway station, and students are also helping to provide passengers with information, said Róbert Homolya, according to the MTI. As an example, he mentioned, that due to the closure of the Nyugati Railway Station, trains on the Esztergom lines terminate at and depart from Rákosrendező, those on the Veresegyháza line run to Újpest station, the Debrecen intercities terminate at Zugló, and those from Szeged at Kelenföld, the Lajosmizse line runs to Kőbánya-Kispest. He added that the transfer points had been set up in cooperation with the Budapest Transport Center and that they had been made along guided transport alternatives (trams and metro) because the bus lanes of the capital would not be able to bear the strain of the replacement buses.

Designed by the Austrian architect August de Serres and the office of Gustave Eiffel in Paris, which later became world-famous for the Eiffel Tower, Nyugati Railway Station opened in 1877 and was last restored between 1978 and 1988 and has not undergone major renovations since.

Cover photo: Nyugati railway station will be closed for a month (Photo: MÁV)