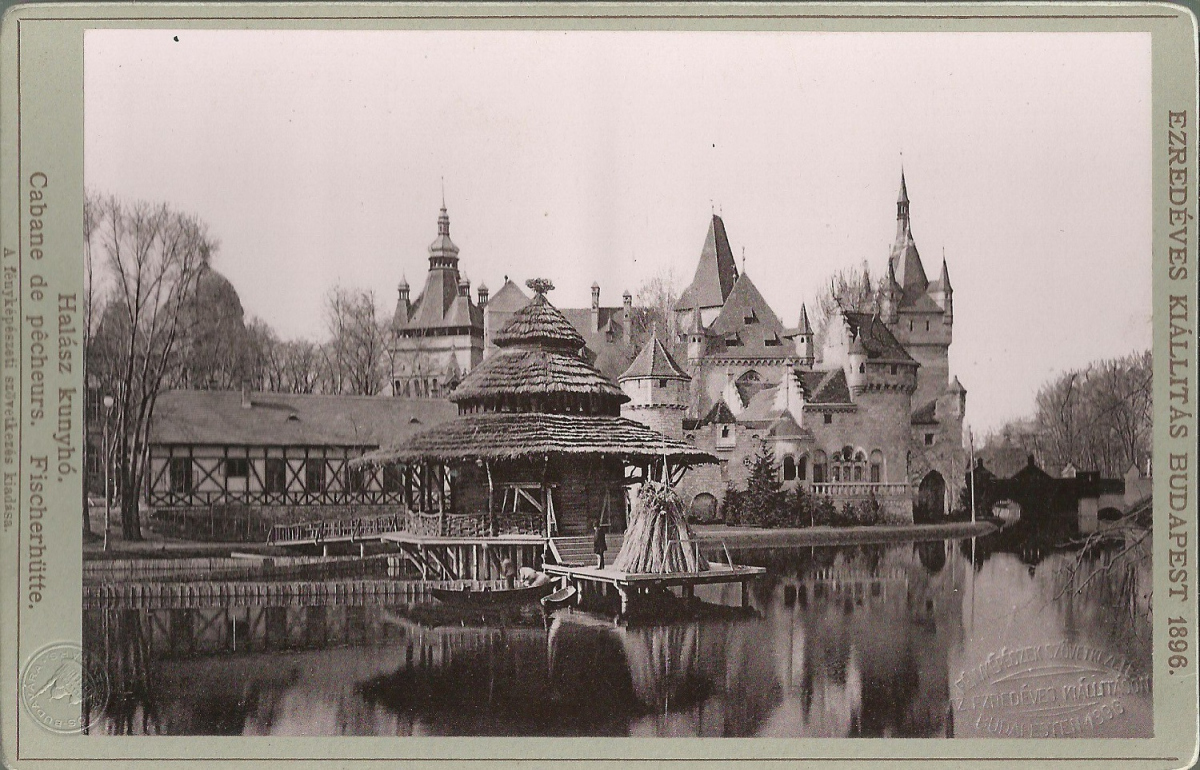 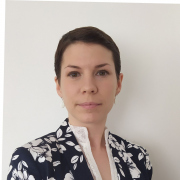 The National Millennium Exhibition in City Park, opened in 1896, is a unique event to this day. The capital has not hosted such a large-scale exhibition since then, which also presents the history, economy, industry, and ethnography of the nation. Thanks to the photographs taken by the famous photographers of the period, György Klösz and Antal Weinwurm, people can still marvel at the beautiful pavilions built for this event, the ethnographic village, the restaurants and the festive atmosphere.

The whole country celebrated the millennium of Hungary's existence 125 years ago. In the following years and decades after the Austro-Hungarian Compromise, it became more and more of an important line on the agenda that the country's thousandth anniversary should be commemorated. Finally, with the law passed in January 1892 (Article 2), they decided on the national exhibition to be held in Budapest, then planned for 1895. The Committee for the National Millennium Exhibition was formed at the end of 1892 and preparations began. 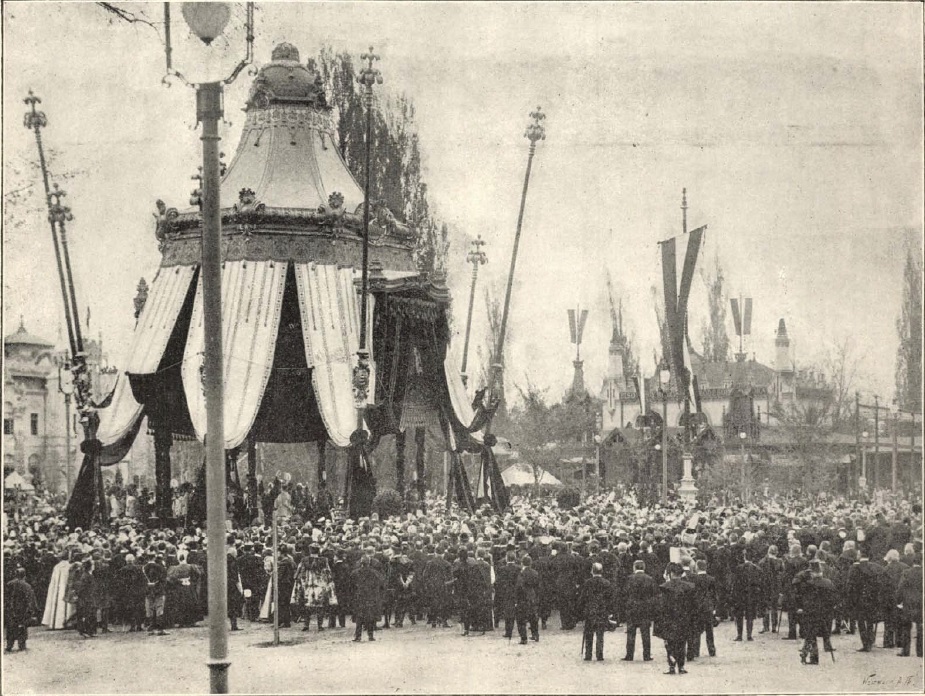 The capital handed over the City Park for the event, where in addition to the constructions, significant alterations also took place. The culmination of the festive year and commemorations was the exhibition held on an area of more than 500,000 square metres, the grand opening of which took place on 2 May 1896 in the presence of the Franz Joseph Emperor of Austria, King of Hungary and Queen Elizabeth. 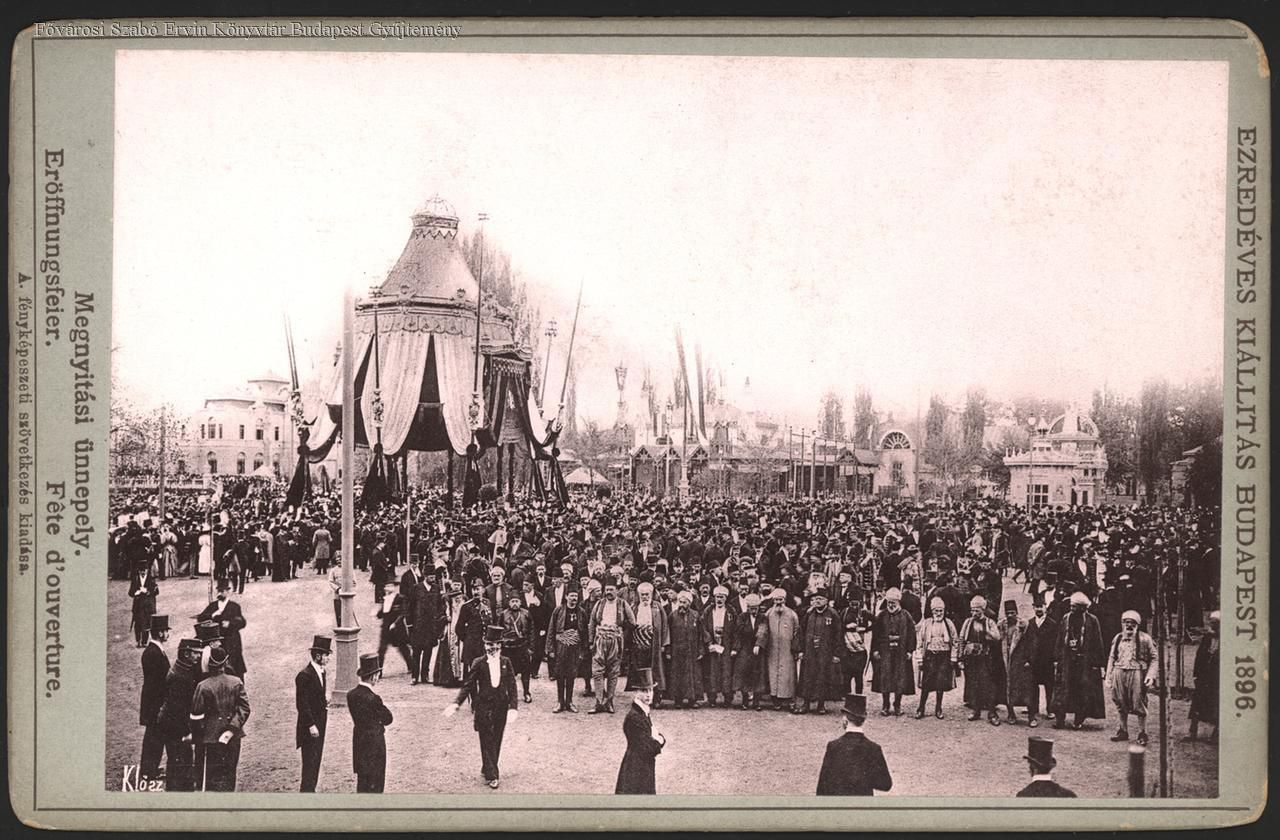 Photograph of the grand opening on 2 May 1896. Published by the Association of Photographers without marking the photographer, but Klösz's name can be read in the left corner of the picture, so he can be the photographer (Source: FSZEK Budapest Collection)

The exhibition, which simultaneously presented the achievements in agriculture, industry and the arts, the glorious national past and the ethnography of the country, consisted of two main parts: the historical and the contemporary exhibition. The former was held in the Castle of Vajdahunyad in the City Park, the latter - which contained 19 groups - was displayed in temporary halls and pavilions scattered throughout the City Park.

One would think that capturing this huge undertaking, which also had advertising value, was a cardinal issue and the excellent photographers of the era were specifically invited for the distinguished task. That is not how it happened at all. The photographers were not feverishly preparing for the occasion either. Although there have been efforts made since 1894 to unite, to have a more organised presentation (to form a photographer's association and to hold a congress), these have ultimately not materialised due to a lack of enthusiasm. In addition, the photography profession was not capital-intensive enough to appear in the exhibition with its own pavilion, so they were housed in Group 15's Hall (Paper Industry; Reproduction Arts) of the contemporary exhibition. 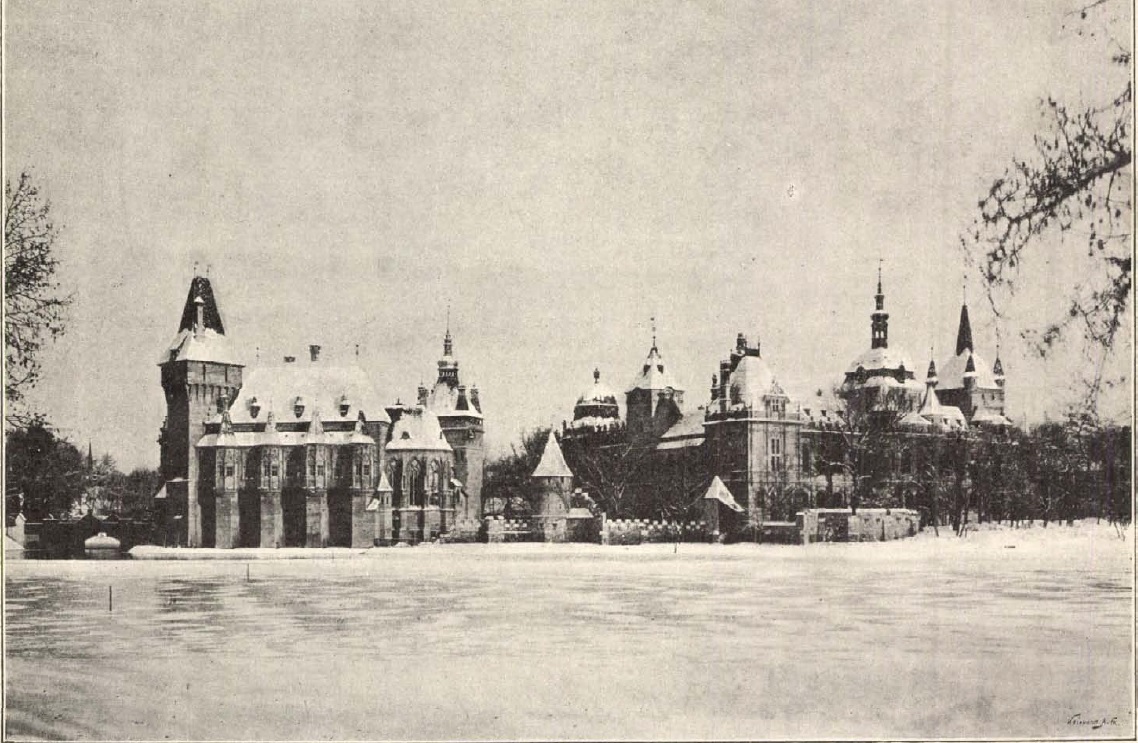 After its formation, the Association of Photographers began work and photography in the fall of 1895. Thus, people may come across images that capture the City Park construction or were taken in the winter. An example of the latter is Antal Weinwurm's recording of the Main Historical Group building in the 2 February 1896 issue of the Vasárnapi Ujság 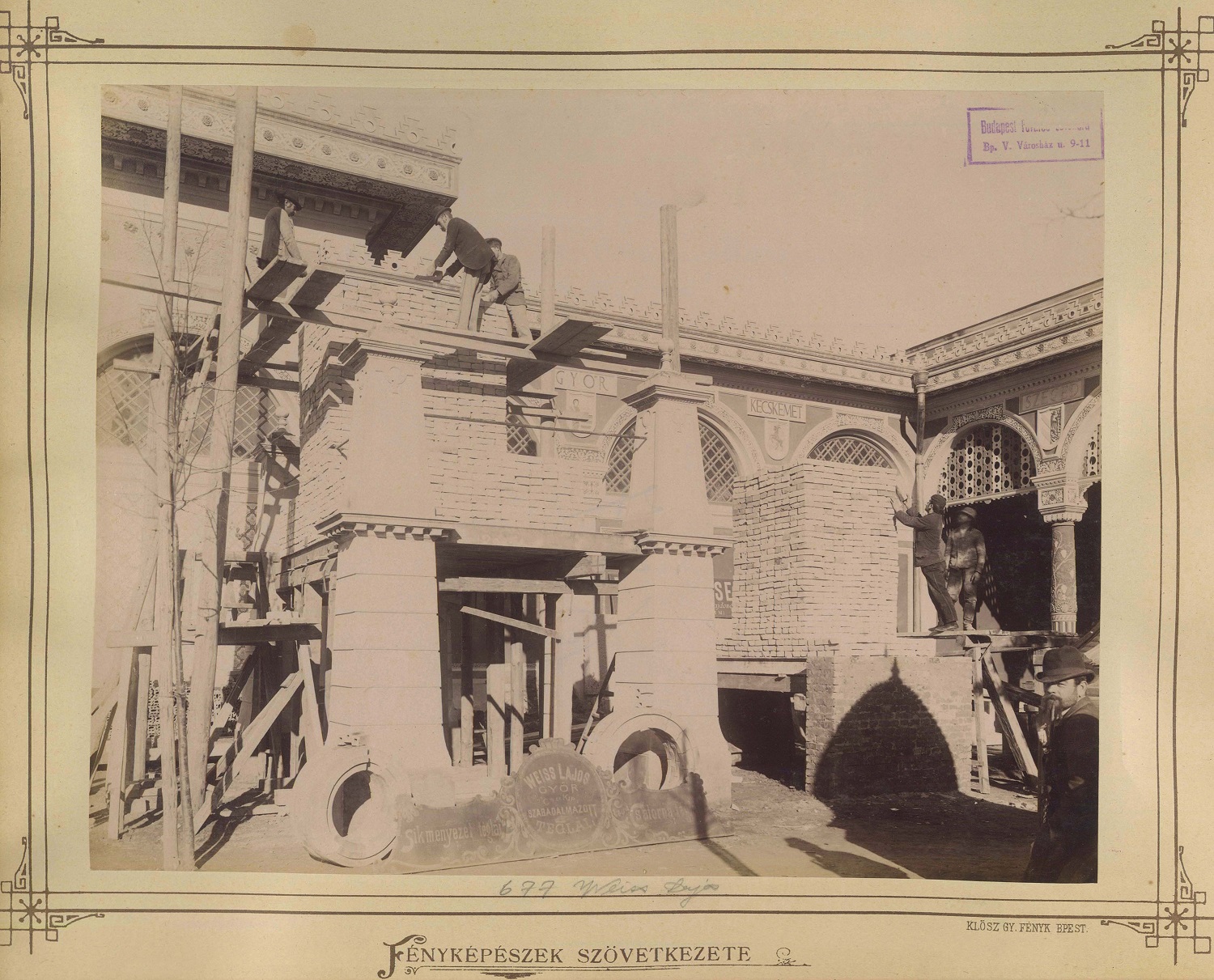 Construction of the Weiss brick-making pavilion in 1896 by György Klösz (Source: Fortepan/Budapest Archives, Reference No.: HU.BFL.XV.19.d.1.10.218)

This pavilion, designed by Lipót Baumhorn, with a floor area of about five thousand square metres, was built by the company of Dávid Lövy and his son in the spring of 1895. Exhibitors also had to contribute to the costs. In order to encourage more active participation from the photography profession, the 15th Group Committee of the Exhibition, with the approval of the Exhibition Directorate, announced a tender for the exclusive right to work in the exhibition between 1 October 1895 and the end of October 1896. All domestic photographers who contributed to the cost of the reproduction industry pavilion were eligible to apply. The Group Committee reserved the right to choose freely from among the tenderers, regardless of the amount offered. 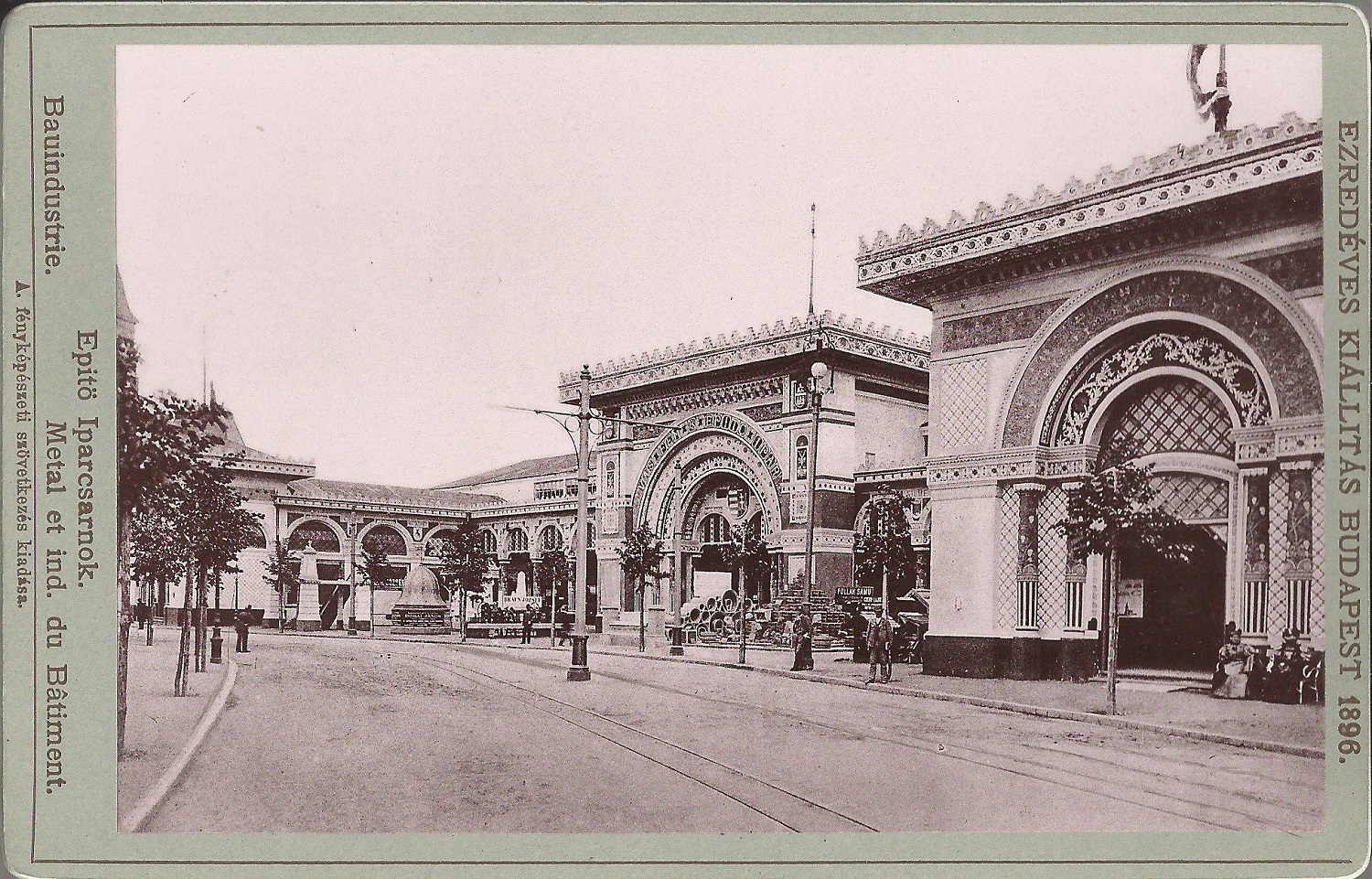 The building of the Industry Hall at the National Millennium Exhibition (Source: Hungarian National Digital Archive/Hungarian Museum of Trade and Tourism) 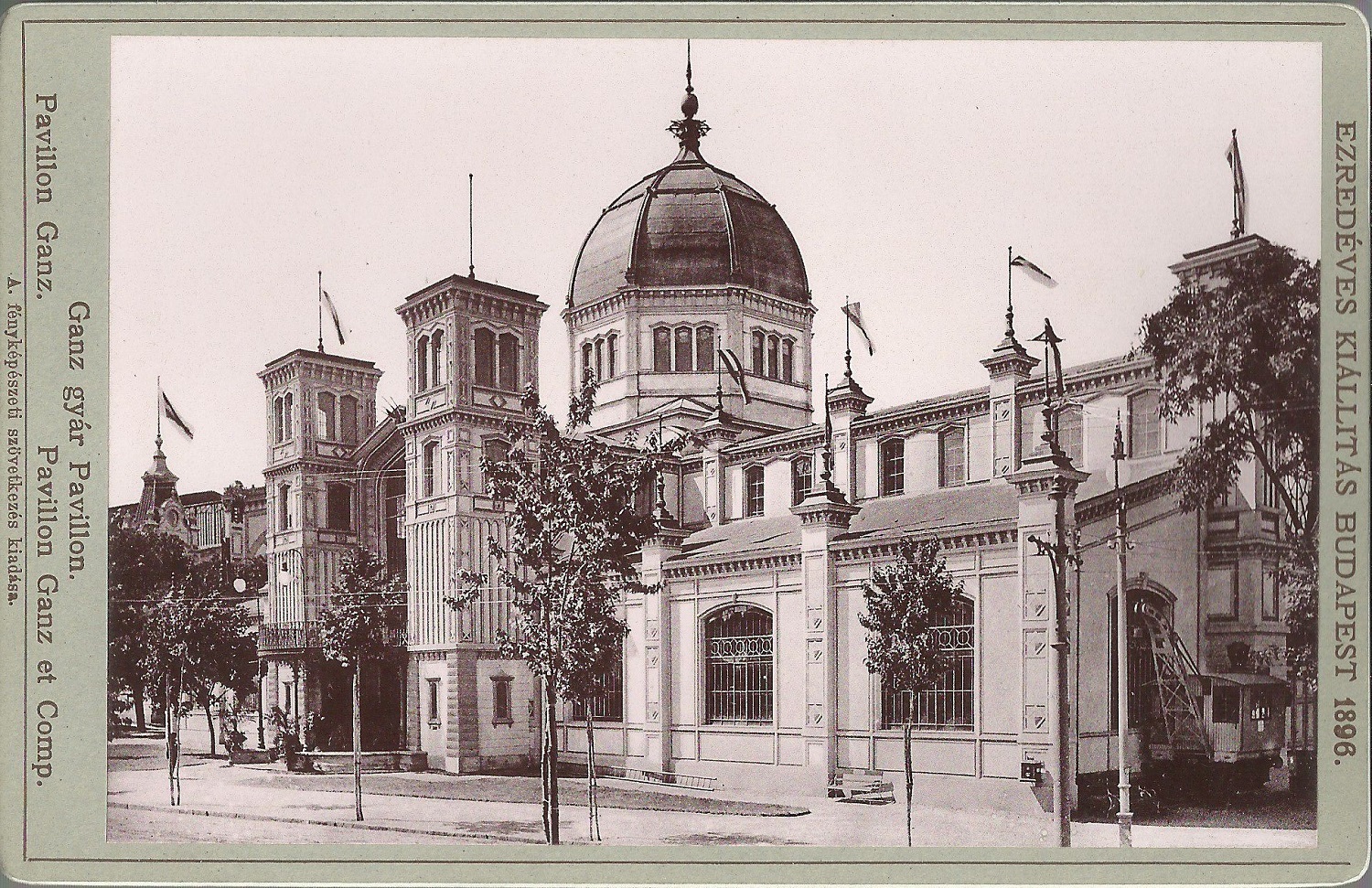 Pavilion of the Ganz Works at the National Millennium Exhibition (Source: Hungarian National Digital Archive/Hungarian Museum of Trade and Tourism)

Following the success of the competition, the eight outstanding photographers formed the Association of Photographers in the autumn of 1895, which received special permission to sell photographs of the exhibition and its halls throughout the exhibition and the organisers provided them with a place for a studio in the Group 15 pavilion, and allowed them to set up tents to take ‘quick photos’.

The members of the association started the work already in the autumn of 1895 after the formation and captured the City Park works and the pavilions under construction with their photos. Images issued by the Association of Photographers typically do not mark the photographer separately, making it difficult to link them to individual photographers. Exceptions to this are Antal Weinwurm's recordings of the buildings and interiors of the Main Historical Group, as well as the works of György Klösz. 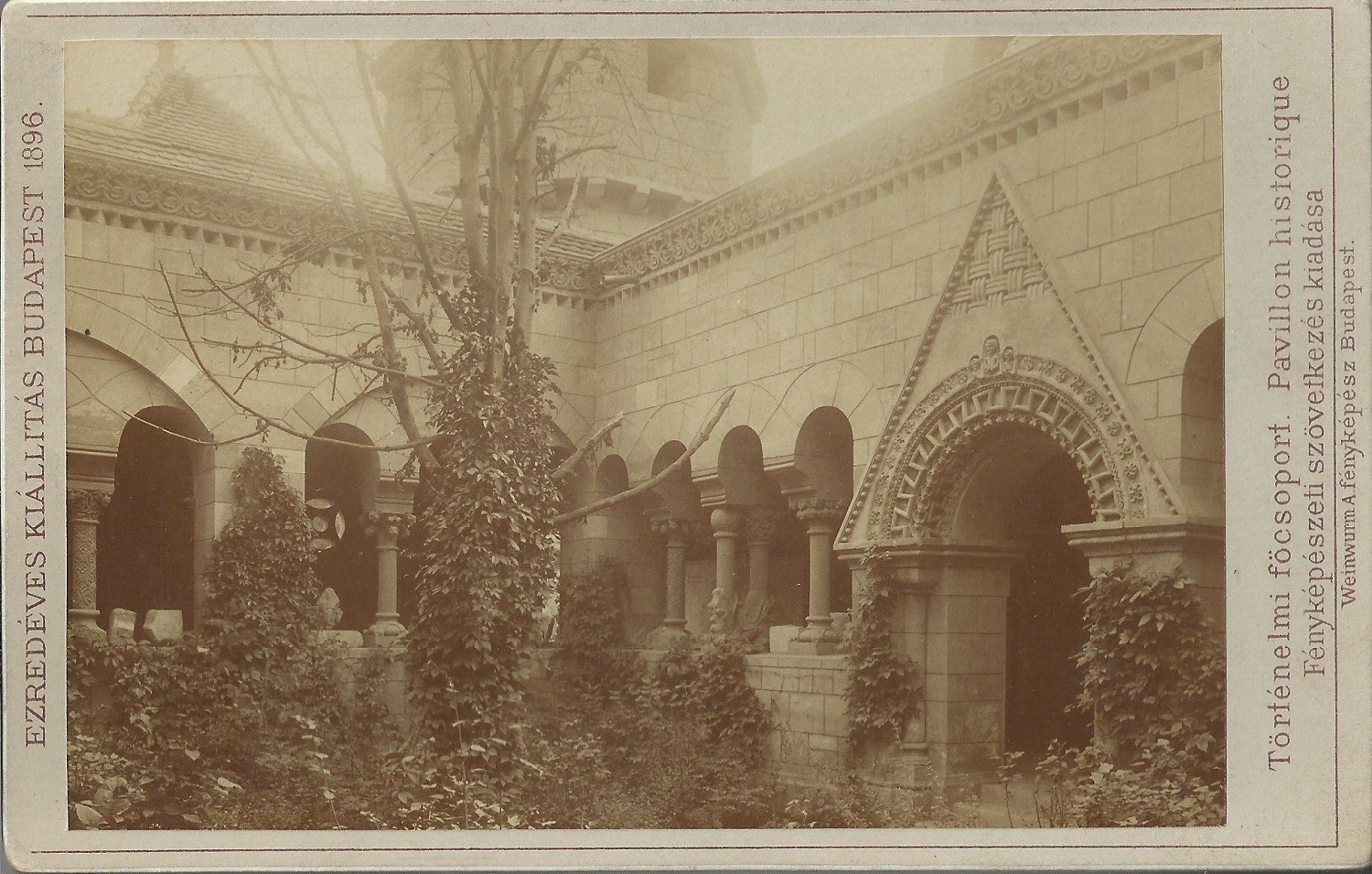 In the photos published by the photographic association, the name of the photographer, Antal Weinwurm, is indicated separately in the photos of the buildings and interiors of the Main Historical Group. (Source: Hungarian National Digital Archive/Hungarian Museum of Trade and Tourism) 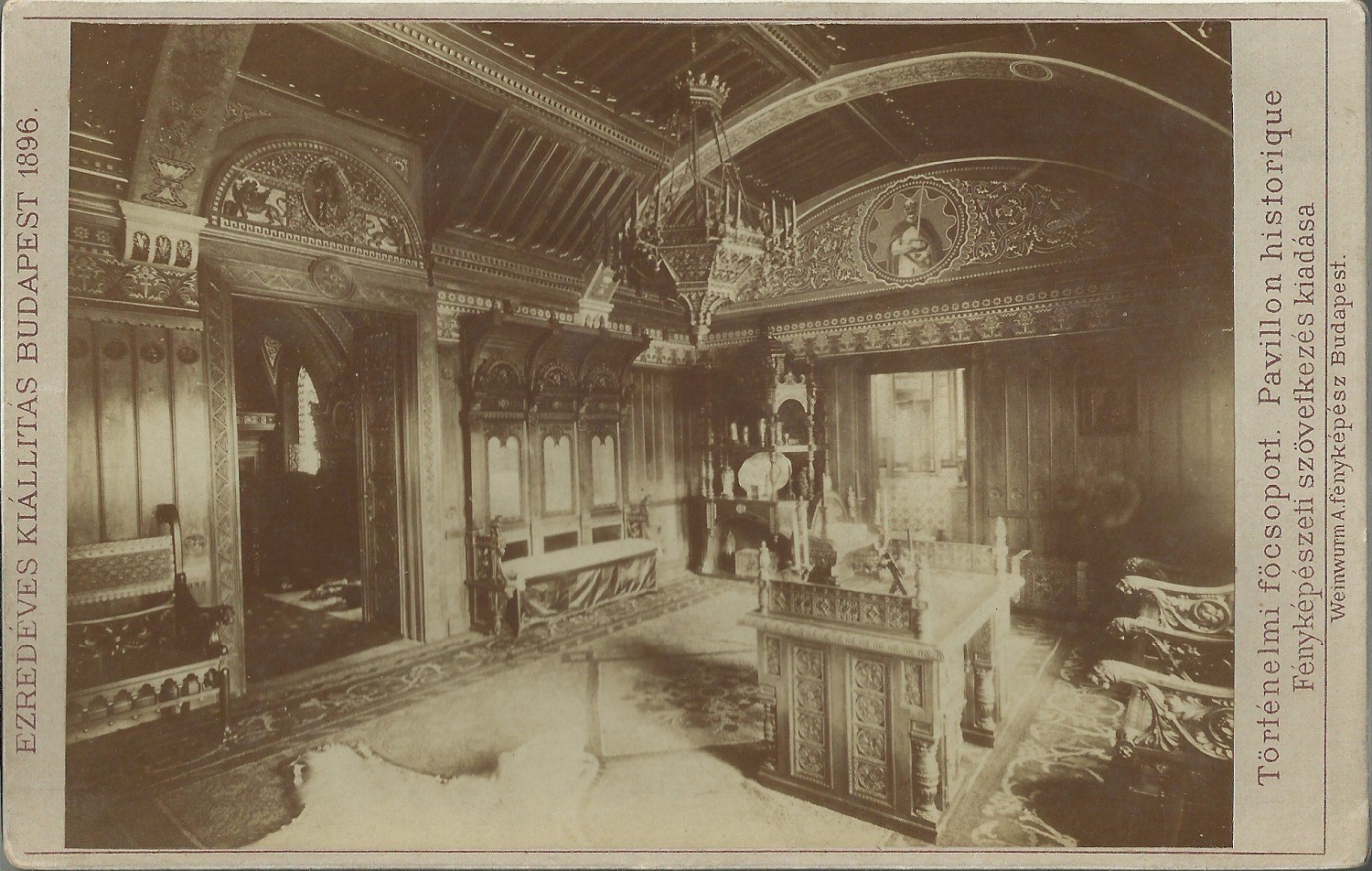 The study of the royal suite in the Romanesque building of the Main Historical Group in the Vajdahunyad Castle in the City Park, photographed by Antal Weinwurm (Source: Hungarian National Digital Archive/Hungarian Museum of Trade and Tourism) 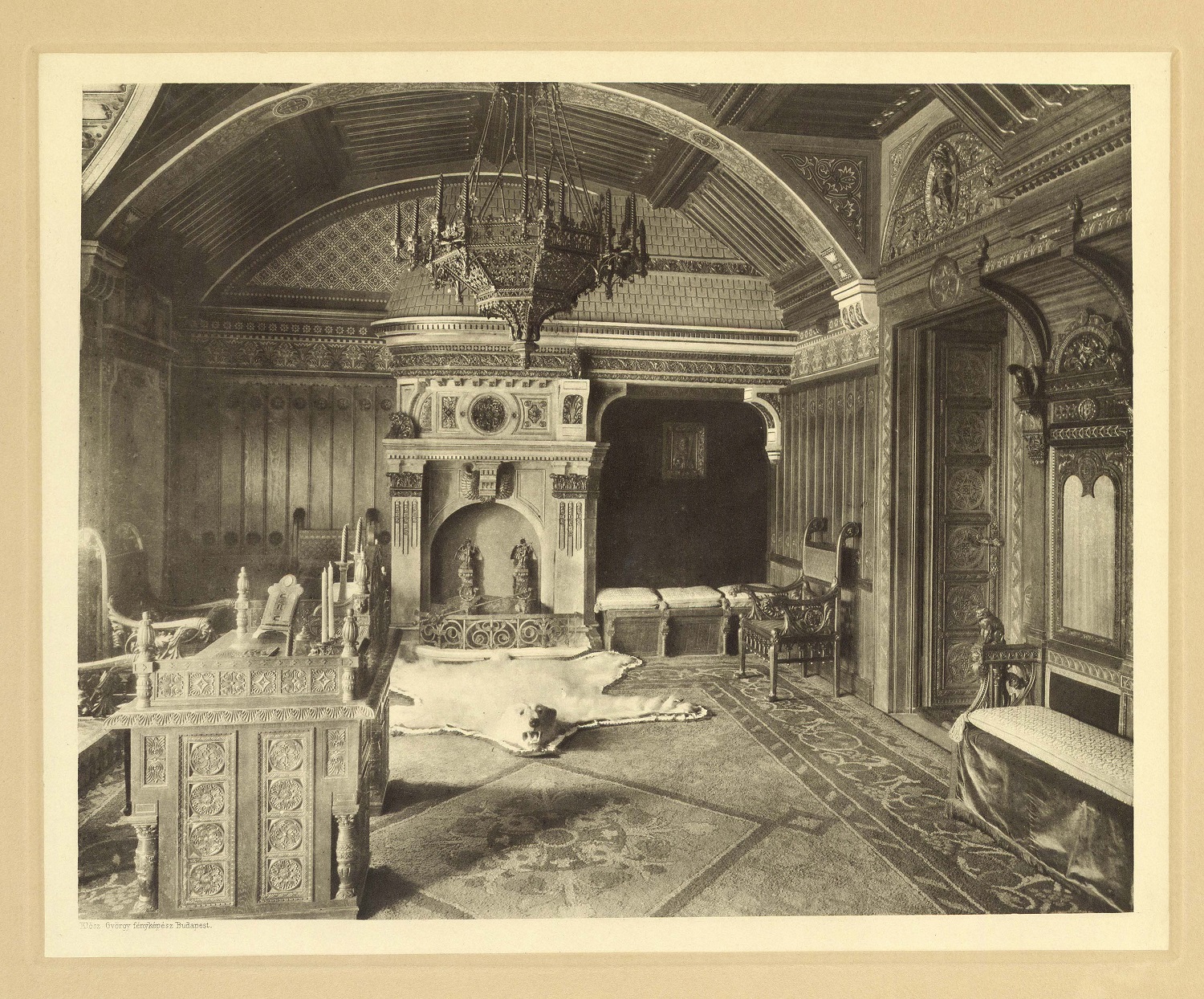 The study can be seen from another angle in György Klösz 's photograph (Source: Fortepan/Budapest Archives, Reference No.: HU.BFL.XV.19.d.1.01.010) 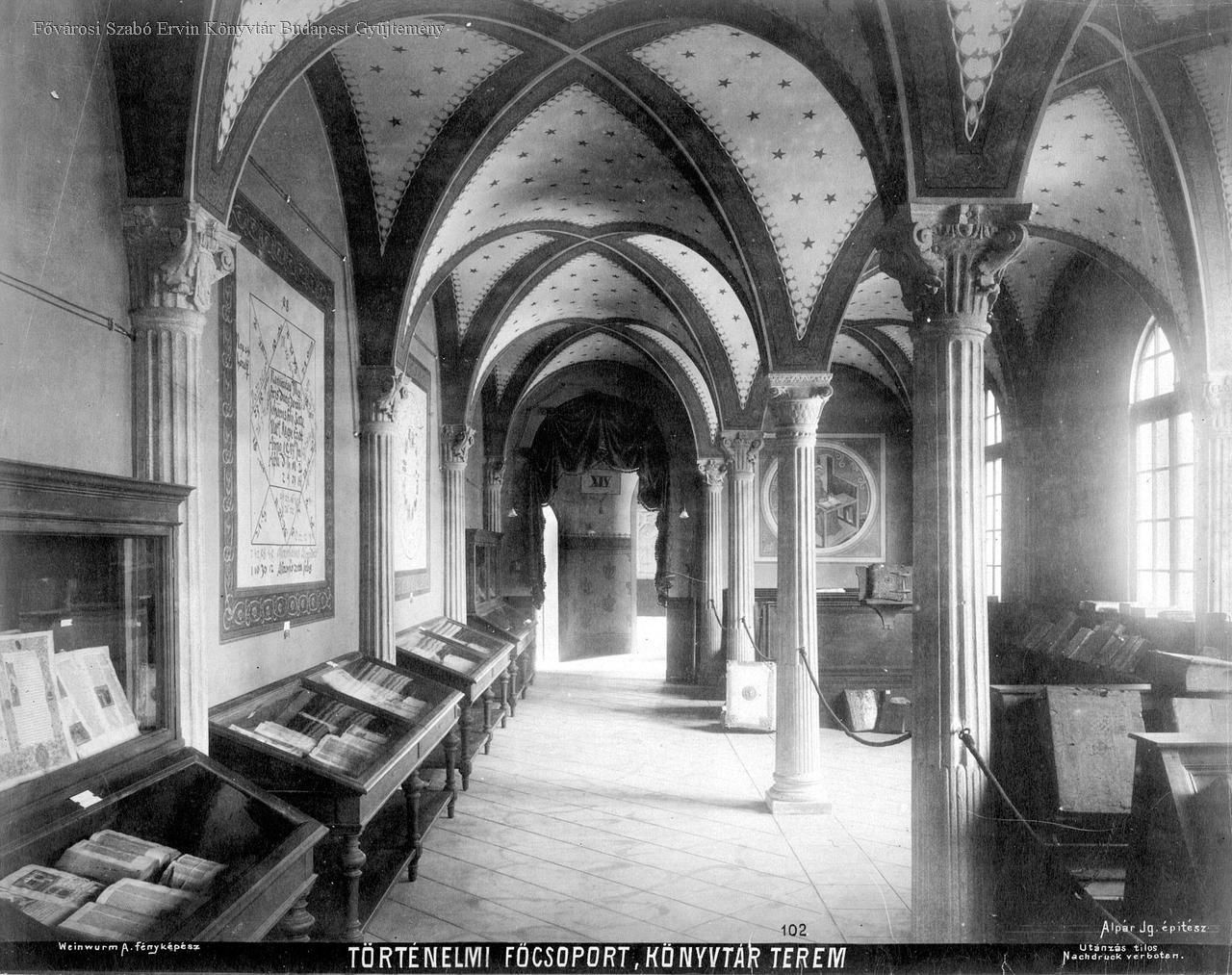 What is certain is that Klösz and Weinwurm were actively working on capturing the exhibition, especially their images tell posterity about the large-scale event, which have also appeared in various albums. Klösz took nearly seven hundred pictures of the 1896 millennium celebrations, and Weinwurm's recordings appeared in columns in the Vasárnapi Ujság and Ország-Világ.

One thing is often missing from their photos: the “people of the fair”, the swarming crowd, the multitude of people interested. Their images capturing the exhibition focused more on the buildings than on the event itself, the atmosphere. If a larger group is present at the recording, it is a set photo with the employees of the particular exhibiting company or restaurant.. 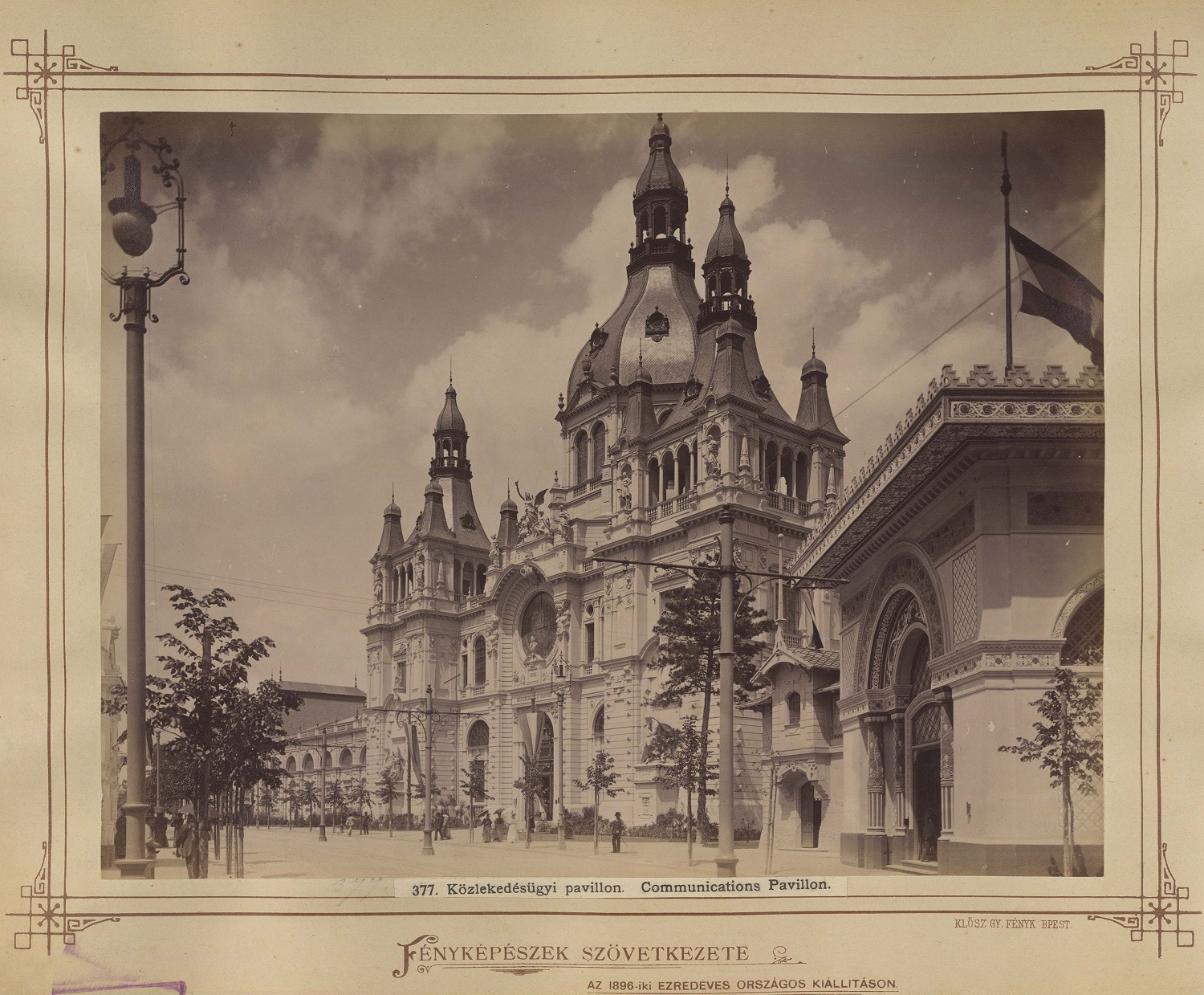 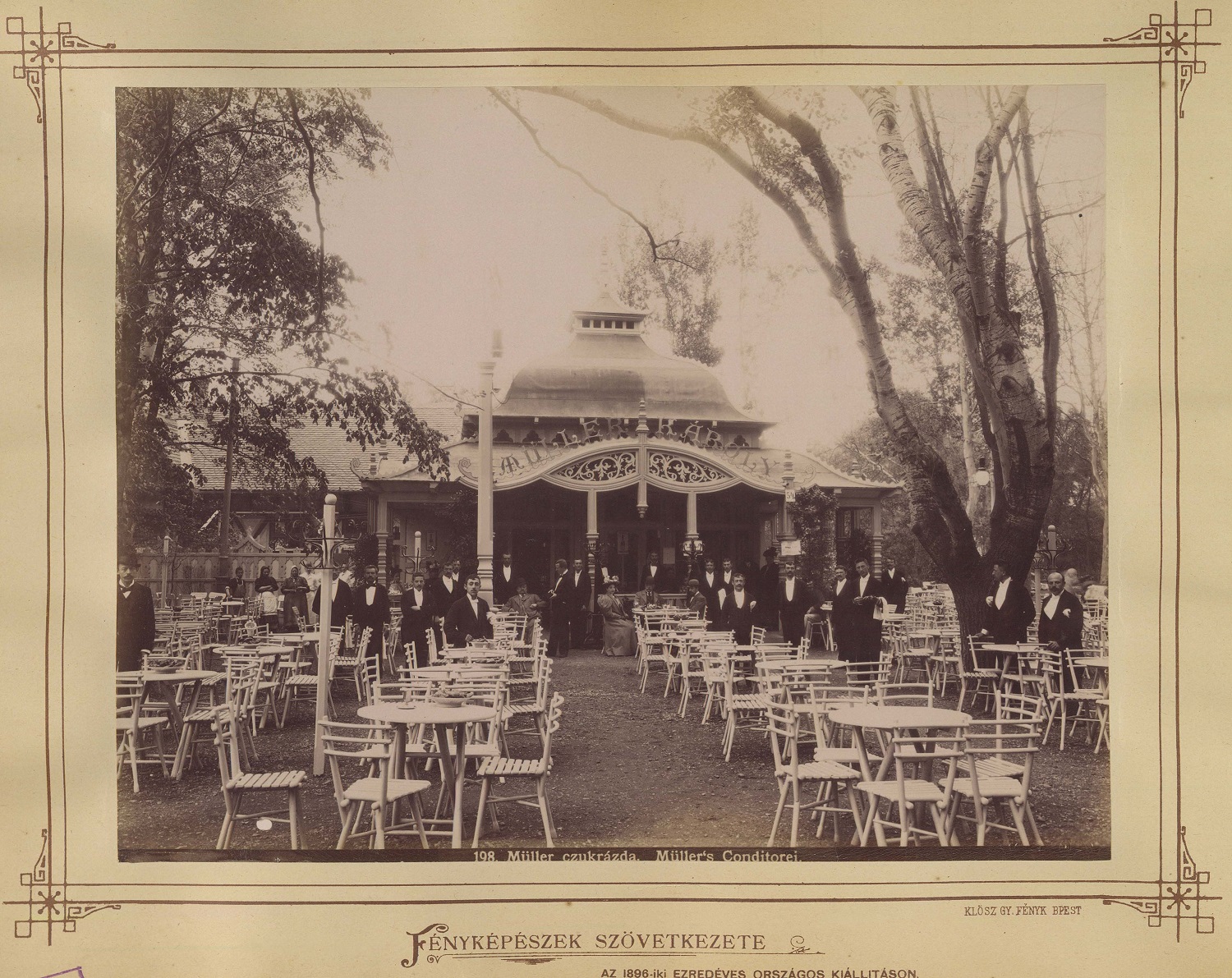 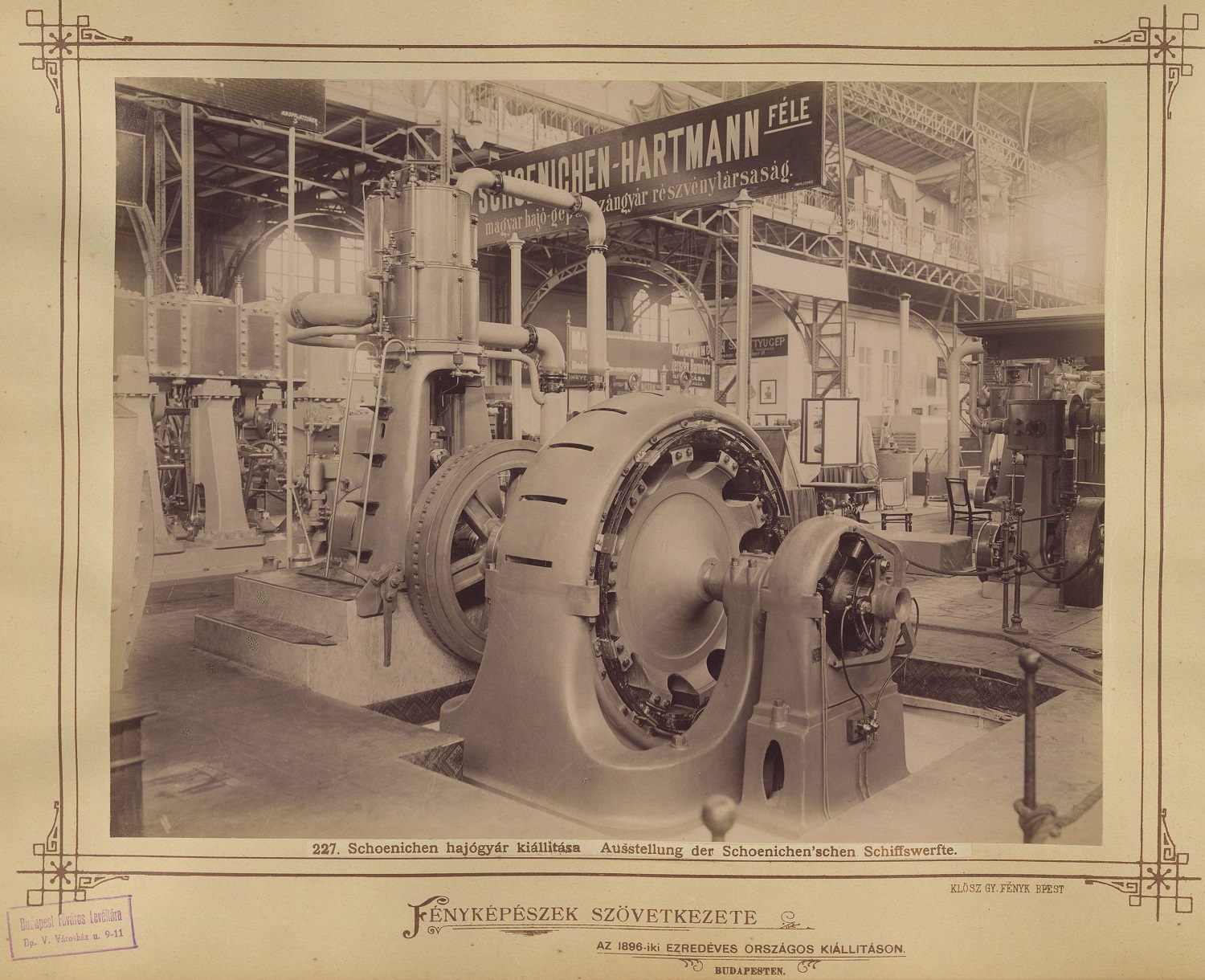 The exhibition of the Schoenichen-Hartmann shipyard at the 1896 National Millennium Exhibition, by György Klösz (Source: Fortepan/Budapest Archives, Reference No.: HU.BFL.XV.19.d.1.09.020) 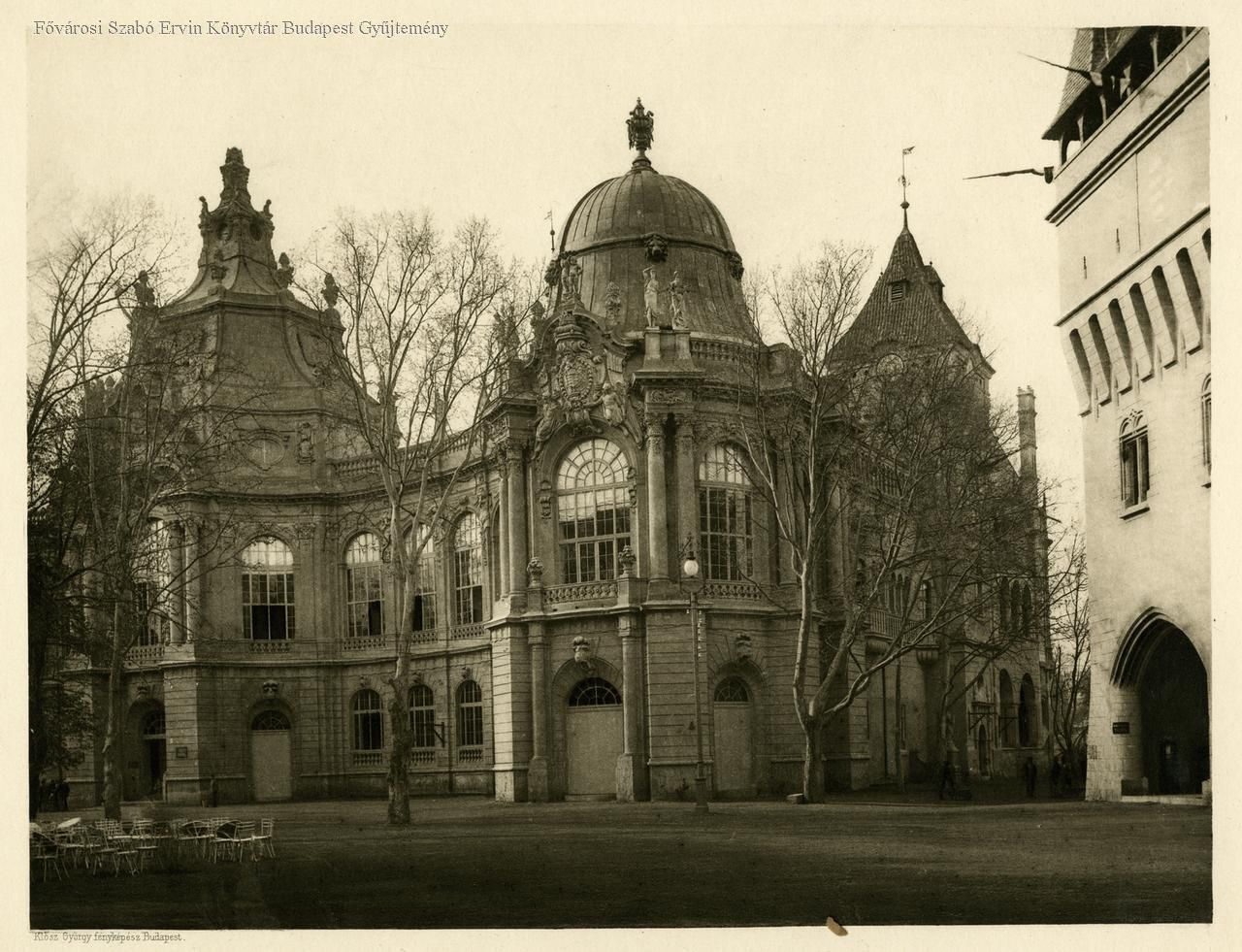 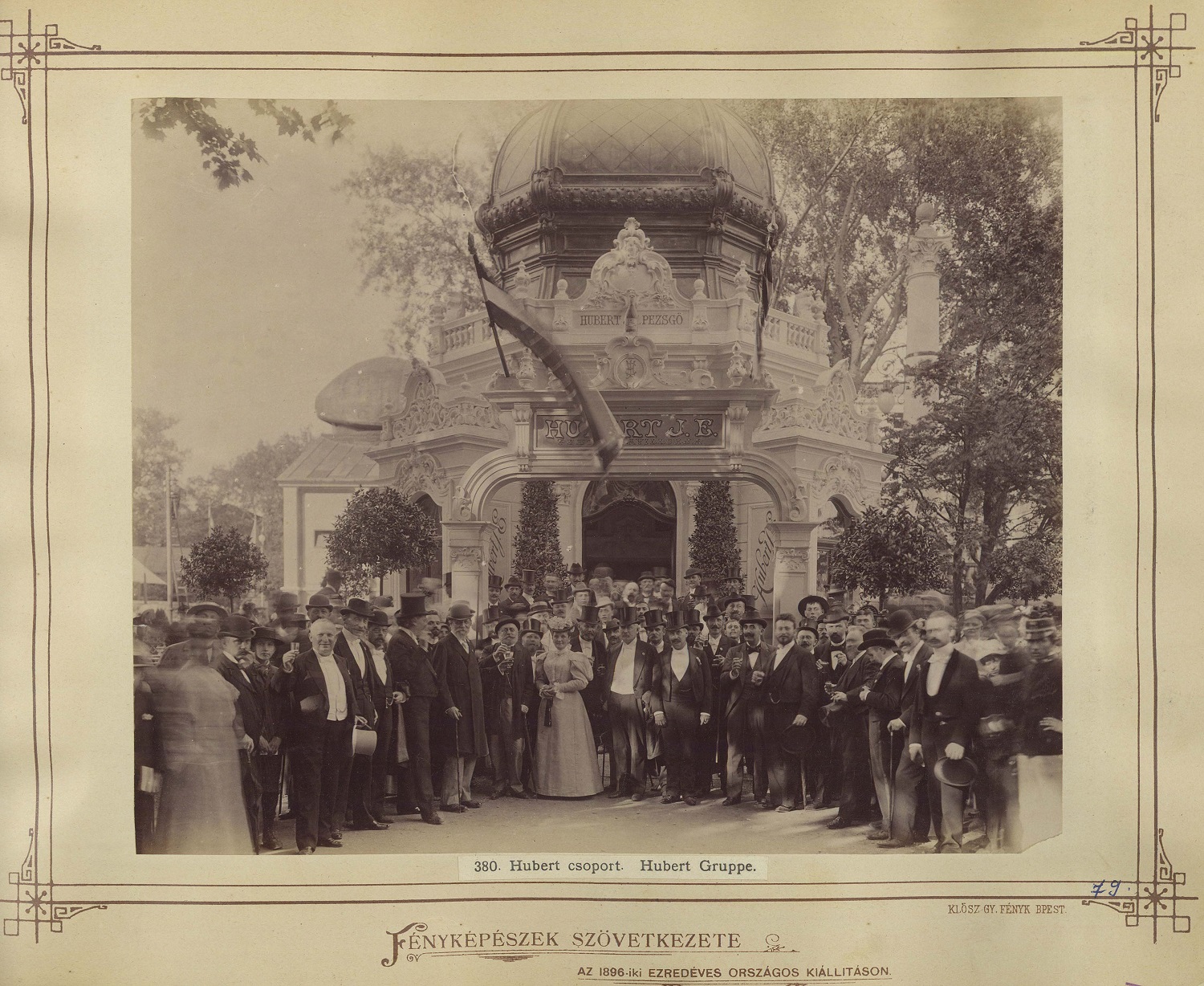 Members of the Hubert Champagne Factory in front of their pavilion at the National Millennium Exhibition in 1896, photographed by György Klösz (Source: Fortepan/Budapest Archives, Reference No.: HU.BFL.XV.19.d.1.09.158) 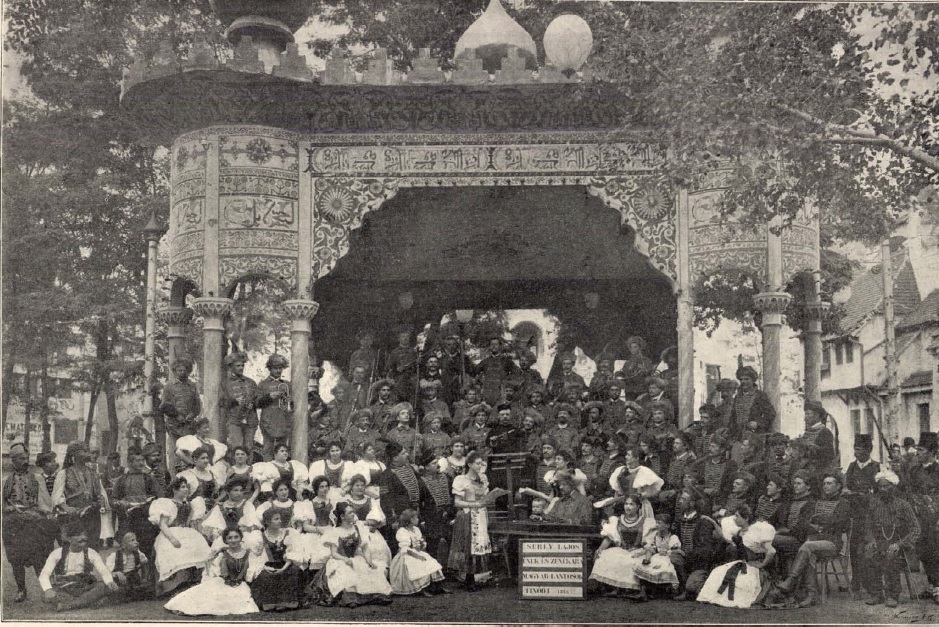 Several critical voices have complained that photography has been classified under the reproduction industry, downplaying it. However, the quality trade fair - in which the eight photographers also exhibited - compensated the public: the exhibition of the successors of teacher Koller (Román Forché and István Gálfy), Lipót Strelisky and Manó Mai was an undivided success. György Klösz, Károly Divald Jr. and Antal Weinwurm wanted to favour the profession by presenting photomechanical methods. The slide film made by Weinwurm for the opening of the exhibition was also viewed with great interest, and the King also expressed his appreciation.

The professionalism of the eight photographers is proved by the fact that their work was recognised with various awards at the exhibition: a great millennium medal was received by Károly Divald Jr. for the introduction of a new industry, István Goszleth for his good work, György Klösz for his excellent photographs and high-profile competitiveness, Antal Weinwurm for his excellent competitiveness, the introduction of a new industry and his excellent work. Knight Ede Mertens received a medal for those involved in the military, for joint photographs in the army. Román Forché and István Gálfy received gold medals and Strelisky silver medal from the Minister of Trade. Franz Joseph donated Hungarian nobility to Román Forché photographer, and Manó Mai was a member of the jury in Group 15.

The National Millennium Exhibition in City Park closed on 3 November 1896. Millions have visited it, and thanks to the famous photographers of the period - especially György Klösz and Antal Weinwurm - people can still admire in their recordings how the country and Budapest celebrated its 125 years.

Cover photo: Fisherman's hut and in the background the buildings of the Main Historical Group with the Vajdahunyad Castle. Although the image was issued by the photographic association without marking the photographer, the maker is known exceptionally. The picture appeared in the publication “Buildings of the Main Historical Group of the National Millennium Exhibition” with the name of György Klösz (Source: Hungarian National Digital Archive/Hungarian Museum of Trade and Tourism)