The first station building ('indóház') in Pest was handed over on 15 July 1846, from where the first Hungarian steam-powered train to Vác, which was the first section of the railway line to Vienna, left. With rail transport, the central role of Pest has been strengthened within the country and it set a significant development in motion. So much so that by the 1870s, rail traffic had outgrown Pest's first railway station.

The construction of the railway was preceded by many debates, it was even questioned which side of the Danube it should be built on: Pest or Buda. After it was decided that the railway would end in Pest, and from there the line would continue to Debrecen, construction could begin.

The city of Pest requested in 1844, when the railway was being built, that the Pest-Vienna and Pest-Debrecen railway lines have a separate railway station. They were afraid that if people did not have to transfer in Pest, because the railway would just pass by the city, then the commercial life in Pest would decline. In the end, it was not separate railway stations that were built, but one, the first station building in Pest, which was roughly on the site of today's Nyugati (Western) Railway Station. Roughly, because it reached much further south, it went all the way to today's Jókai Street.

The choice fell on this area of the city because it was still mainly empty at the time, the station building did not have to be squeezed in between anything. The station building, like the current Nyugati Railway Station, was a so-called railway terminus, meaning trains arrived inside the hall. 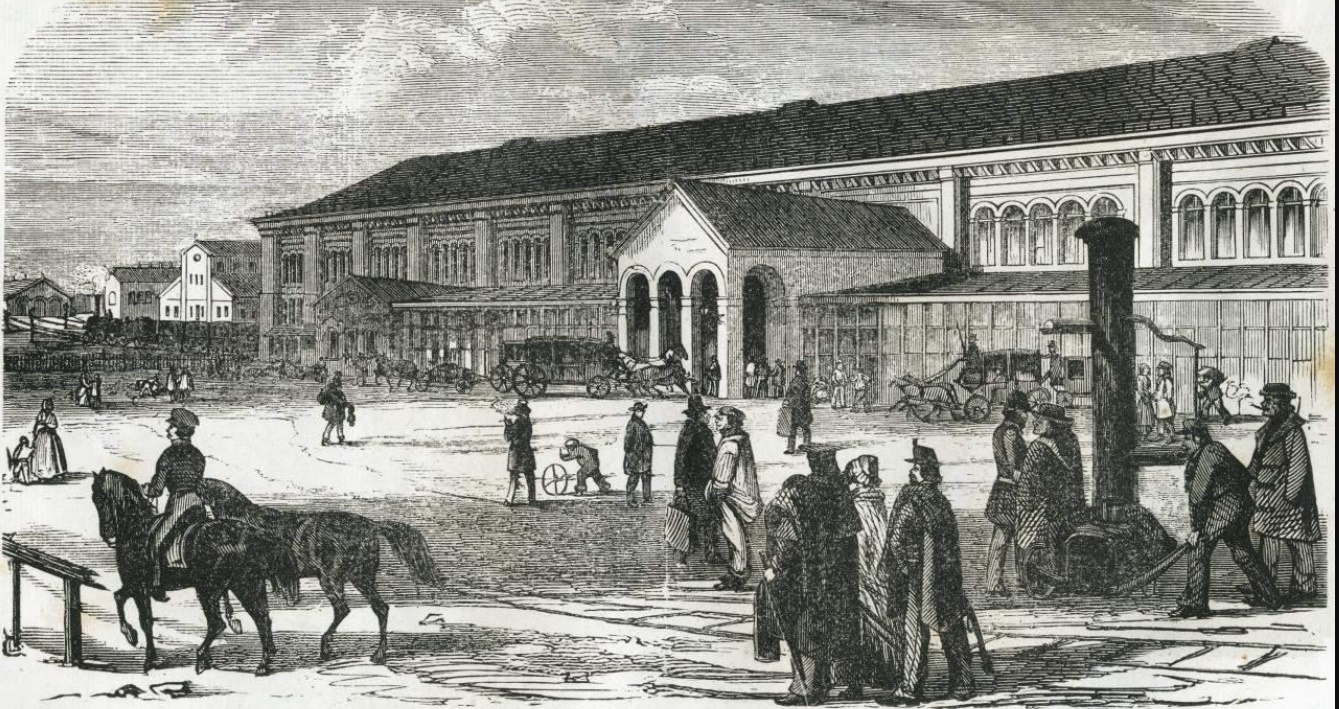 The first station building in Pest was impressive in both size and design (Source: FSZEK Budapest Collection)

The most important building of the station was, of course, the passenger hall itself, which was an imposing size: 142 metres long and 27 metres wide. From the outside, it looked as if it were two-story, as a ledge split the facade in two. At the end of the hall building, five gate openings were made, under each track leading into the hall. The departure and arrival sides were located on both sides of the hall, separated from each other. The classicist-style building, designed by Paul Eduard Sprenger, could have been yellow based on the surviving colour drawings. 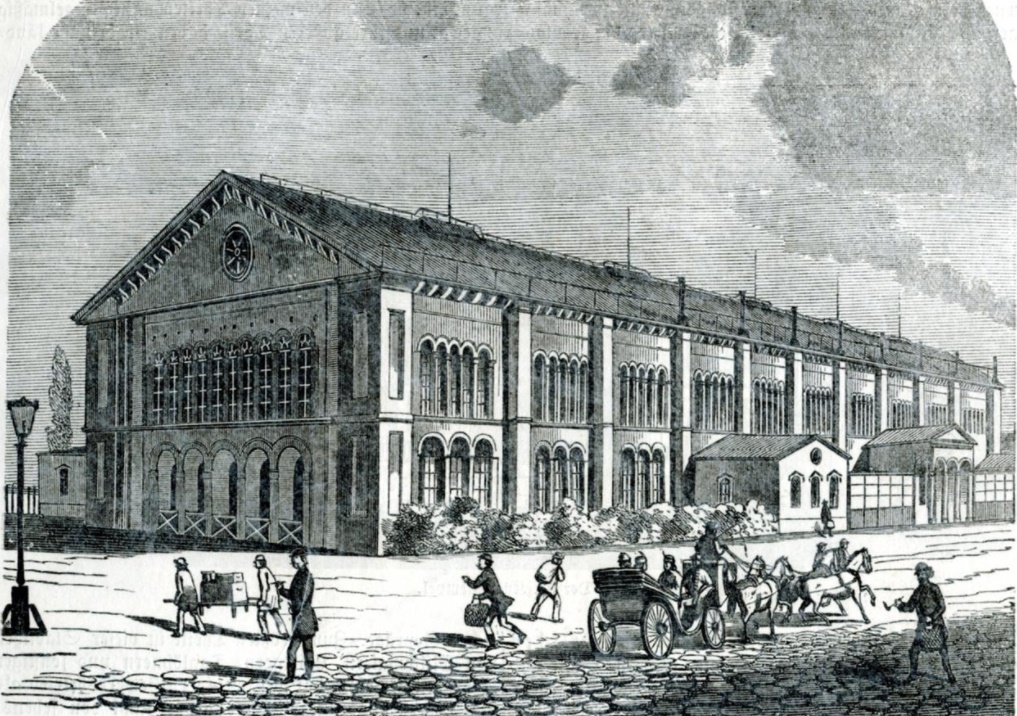 The departure and arrival sides were separated at the station (Source: FSZEK Budapest Collection)

In addition, 21 other buildings were erected at the station, in the design of which several Hungarian architects participated, among others Mátyás Zitterbach and Ferenc Kasselik. According to contemporary press articles, the construction of the station building cost 640,203 HUF and 32 pennies.

The popular newspaper of the age, the Pesti Divatlap, wrote about the opening on 18 July 1846:

“The railway opening ceremony took place on the 15th of the month. And this day will be a memorable one for Hungary, whose people, because of the lack of means of transport, had been staring at the other states of civilised Europe crossed by railway tracks for so many centuries. The departure took place a quarter to four in the afternoon and lasted 55 minutes with a few minutes of staying at the Dunakeszi station. A glorious army of guests raised interest in this ceremony. The palatine of our country was present with his whole family. Several officials from the Royal Council of Governors and the Royal Curia were present. The carriages rolled one after the other among the cheers of the people who sprang up around the station building, most notably among them, the comfortable, richly gilded and decorated palatine carriage made exclusively for the palatine's family." 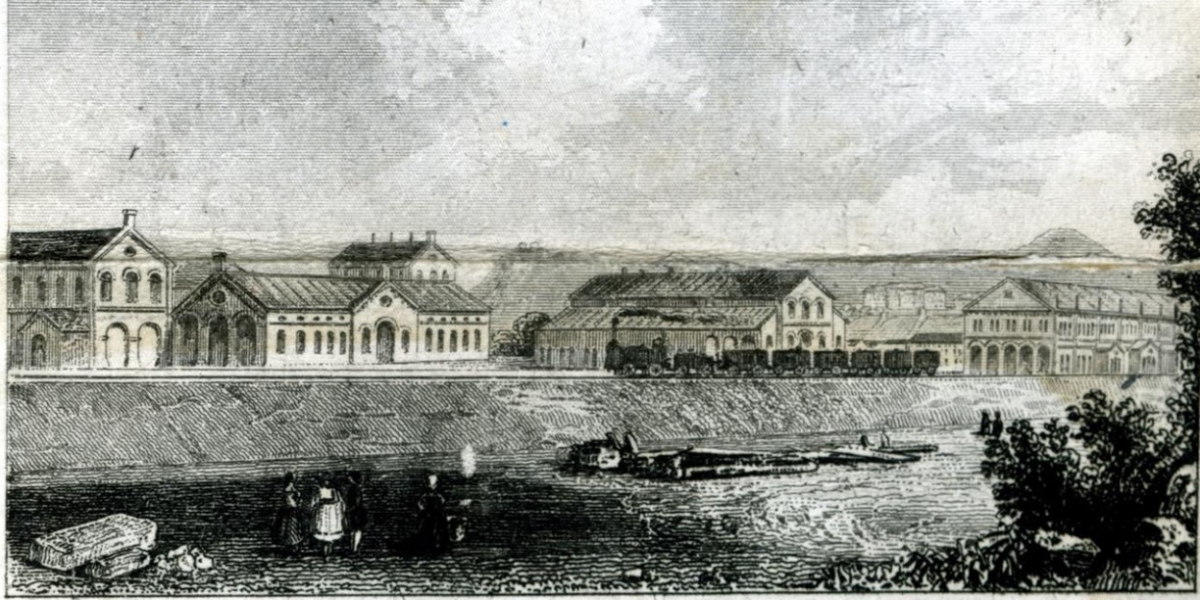 A train pulls out of the Pest station building; Graphics by József Vince Haeufler from 1854 (Source: FSZEK Budapest collection)

The contemporary name of the railway station, the 'indóház', was not an undivided success, the writer named "Nógrádi" in the newspaper called Életképek wrote his opinion on 25 July 1846:

"The German "Bahnhof " was translated by our Hungarians as "indóház". Why did they do this? they know that; maybe they really like that accented o?? It is not bad for an exclamation: because what should the Hungarians complain about! But then (with an accented letter or not), does it express in Hungarian the idea of what it should express? No. From the ''Bahnhof ' not only do the carriages depart, but they also arrive; and if we did not want to say courtyard instead of the house: why did not we expose the idea in the spirit of our language? because it is the terminal of the tracks, whether the carriages depart or arrive there. If there is a bridgehead, gatehead, why could not it be a track head, which was not kneaded and drilled, but an honest-sounding Hungarian word? On behalf of the native of our language, I ask you to try to make the Hungarian audience and writers forget the "indóház" which is already beginning to settle down with a relentless bad sound to it and instead try to civilise the "track head" until someone finds a better one. The signal boxes are good; and 'Bahnhofs' on the way could very well be called 'track houses'."

Eventually, the name railway station, which was also used at that time and was created as a mirror translation of the German Bahnhof, spread and stuck to the larger railway stations, including the Pest building, which opened in 1846. It did not have a separate name at the time, as it did not yet have to be distinguished from other railway stations; for almost 15 years it was the only railway station in Pest and Buda. The trains arrived here, and from there they also departed first to Vác and then, as the railway line was built, to Szolnok.

Although the first station building in Pest was a huge one, by the 1870s it was becoming increasingly difficult to service the growing railway traffic. In addition, it literally made its way onto the Outer Ring Road, as its planned line led through it. Therefore, instead of the old railway station, the owner, the Austrian State Railway Company (which, contrary to its name, was a private company) built the new hall by 1877, which of course ended at the Outer Ring Road's line. During most of the construction, the old building functioned smoothly, departing and receiving the trains. 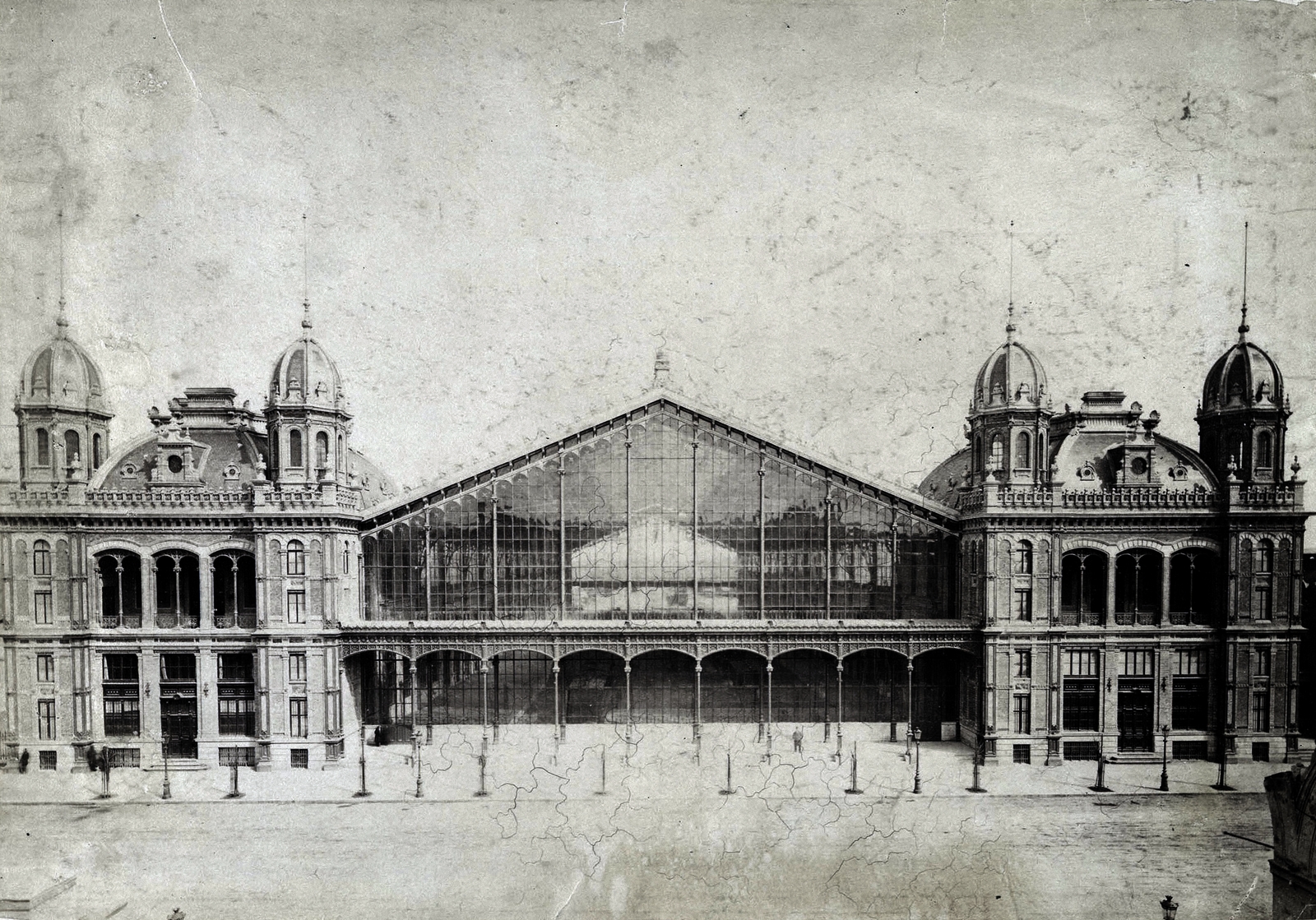 Today, this building stands on the site of the first station building in Pest. The new railway station was photographed by György Klösz in 1878 (Photo: Fortepan, Budapest Archives, Reference No.: HU.BFL.XV.19.d.1.05.202)

This could be achieved by designing the new railway station wider and taller (this is known today as the Nyugati Railway Station, named in 1891) and simply building the new one over and around the old building. Once completed, the demolition of the old station house began, much of which was already inside the new train station at the time. Only to the south, towards today's Jókai Street, a part of it extended, as the facade of the new railway station was aligned with the line of the Outer Ring Road. 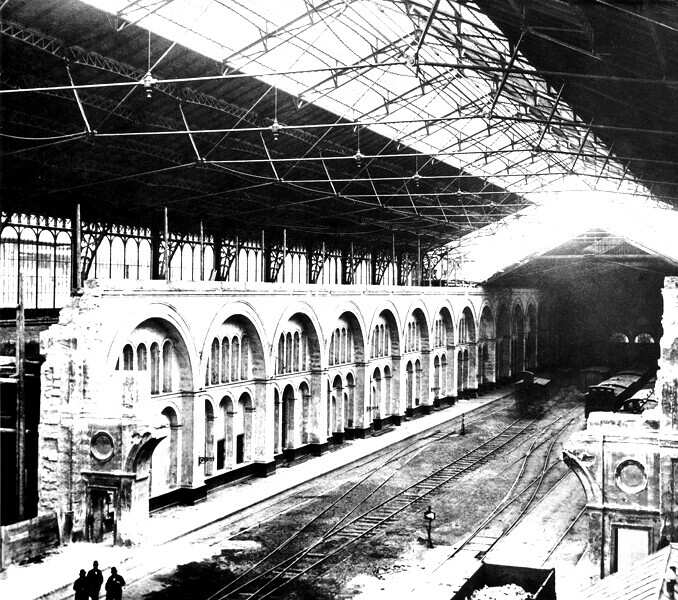