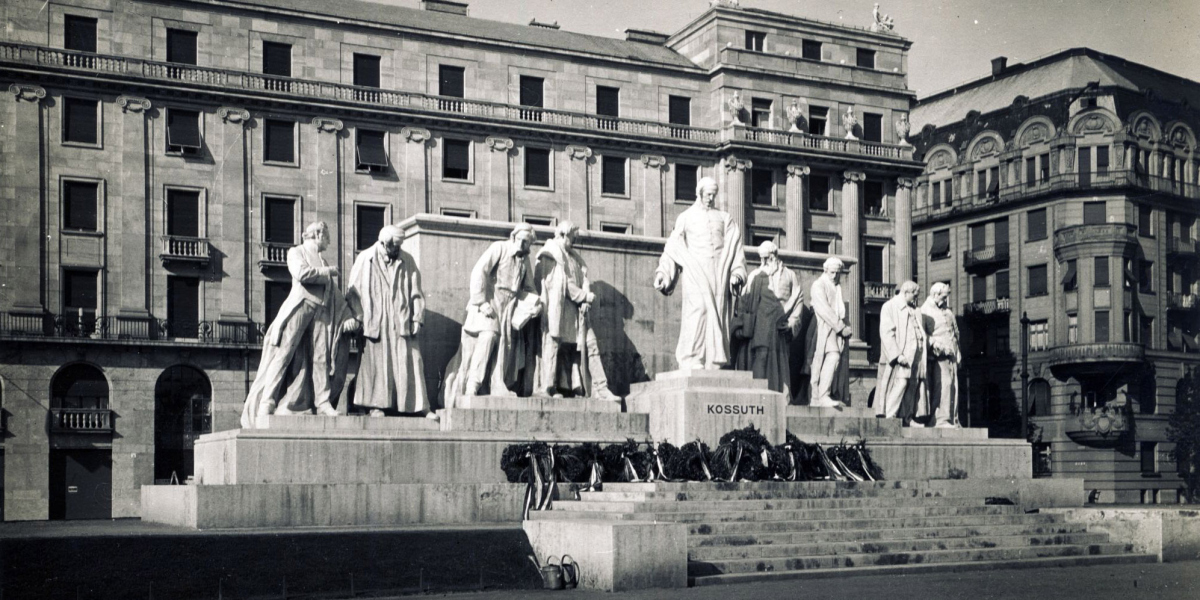 The square in front of the Parliament has been called Kossuth Square since 1927, since the statue of the great statesman was inaugurated that year. The designation of its exact location provoked lengthy debates, and the finished work was tentatively erected at several points of the square by the time it reached its final location.

The main venue for the celebrations on 20 August, as we have seen this year, is Kossuth Square in Budapest: the flag of the nation is hoisted here and the officers are inaugurated here. The smooth running of the programs requires a large free space, which is also available in front of the main entrance of the Parliament.

This square already played an important role during the millennium celebrations of 1896, but after the turn of the century, this practical arrangement was still endangered when planning the placement of various monuments. First they thought of placing the equestrian statue of Count Gyula Andrássy and later the statue of Lajos Kossuth on the axis of the main entrance, but several people also lined up counter-arguments against the ideas. 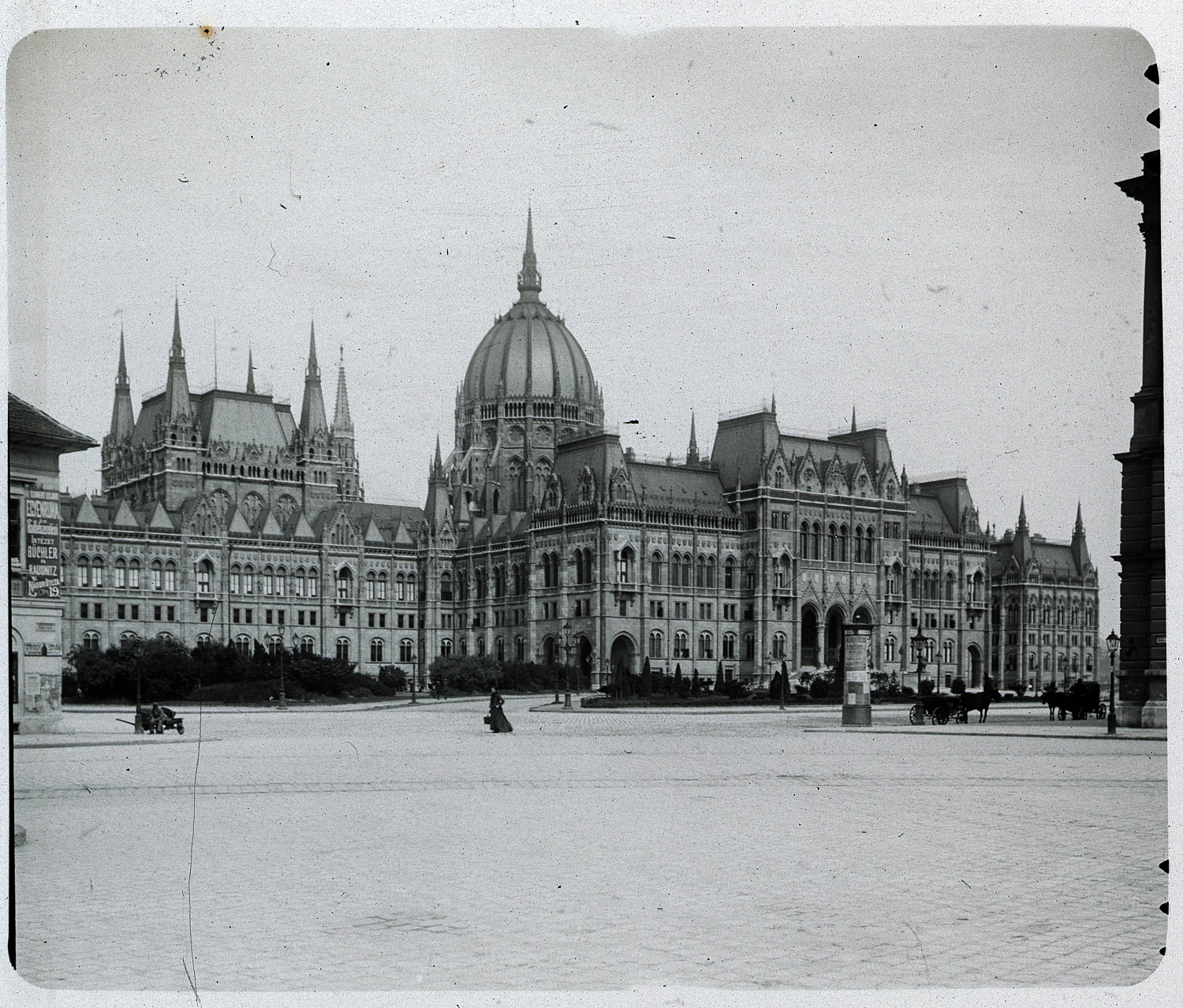 Kossuth Square with the Parliament in 1903 (Photo: Fortepan / photo by Frigyes Schoch)

The discussion about the monument of Lajos Kossuth had two acts. The first act ended in 1903 with the decision of the Budapest City Council to place the sculpture in the axis of the main entrance, 58 meters from the building, and the first - unsuccessful - sculpture competition was announced on the basis of these. The Hungarian Society of Engineers and Architects also started a discourse on the appropriate place of the sculpture - at the same time on the landscaping of the square - for which an internal tender was announced in the spring of 1904. There was no particular interest in this either, only ten entries were received, the best of which was found by the jury to be the one under the motto 'Pietas' by Jenő Lechner.

The young Jenő Lechner - who by the way was the nephew of Ödön Lechner - sketched an arrangement in which the statue would not have been in the axis of the main entrance, but in the southern, wider half of the trapezoidal square. The idea originally came from Antal Palóczi, who argued for a similar arrangement as early as 1900, when the Andrássy statue was placed: he would have placed the equestrian statue in this place. 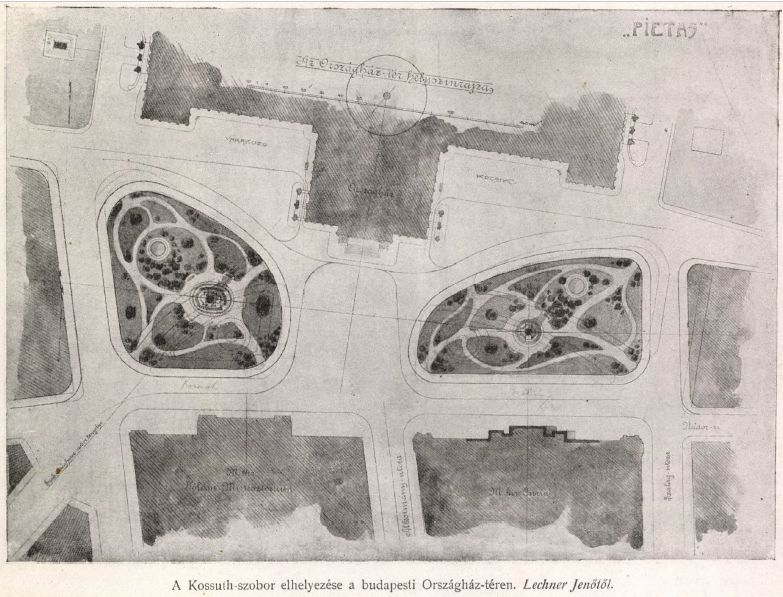 The Országház Square, today's Kossuth Lajos Square, was designed as such, with the Kossuth statue of Jenő Lechner (Source: Építő Ipar, 28 May 1905).

In the end, the Andrássy monument was not placed there, but in front of the southern facade of the Parliament, so the place remained open to the Kossuth statue. Lechner took advantage of this, and in the textual explanation attached to the application material, like Palóczi, he deduced why it was not possible to place the statue in front of the main entrance of the building, where it would otherwise be obvious.

From the point of view of the use of the square, the statue in the middle would be a problem because it would be an obstacle for the marching crowd during the various events - especially those coming from Alkotmány Street. This street was especially important for the square, as it is in line with the dome - unfortunately it is not completely perpendicular to the building, it differs from it by a few degrees, but it is just enough to create a dissonant effect. Jenő Lechner would not have considered it lucky to place the statue in the middle either, because then even those passers-by who had not seen it by then would have noticed this discrepancy. 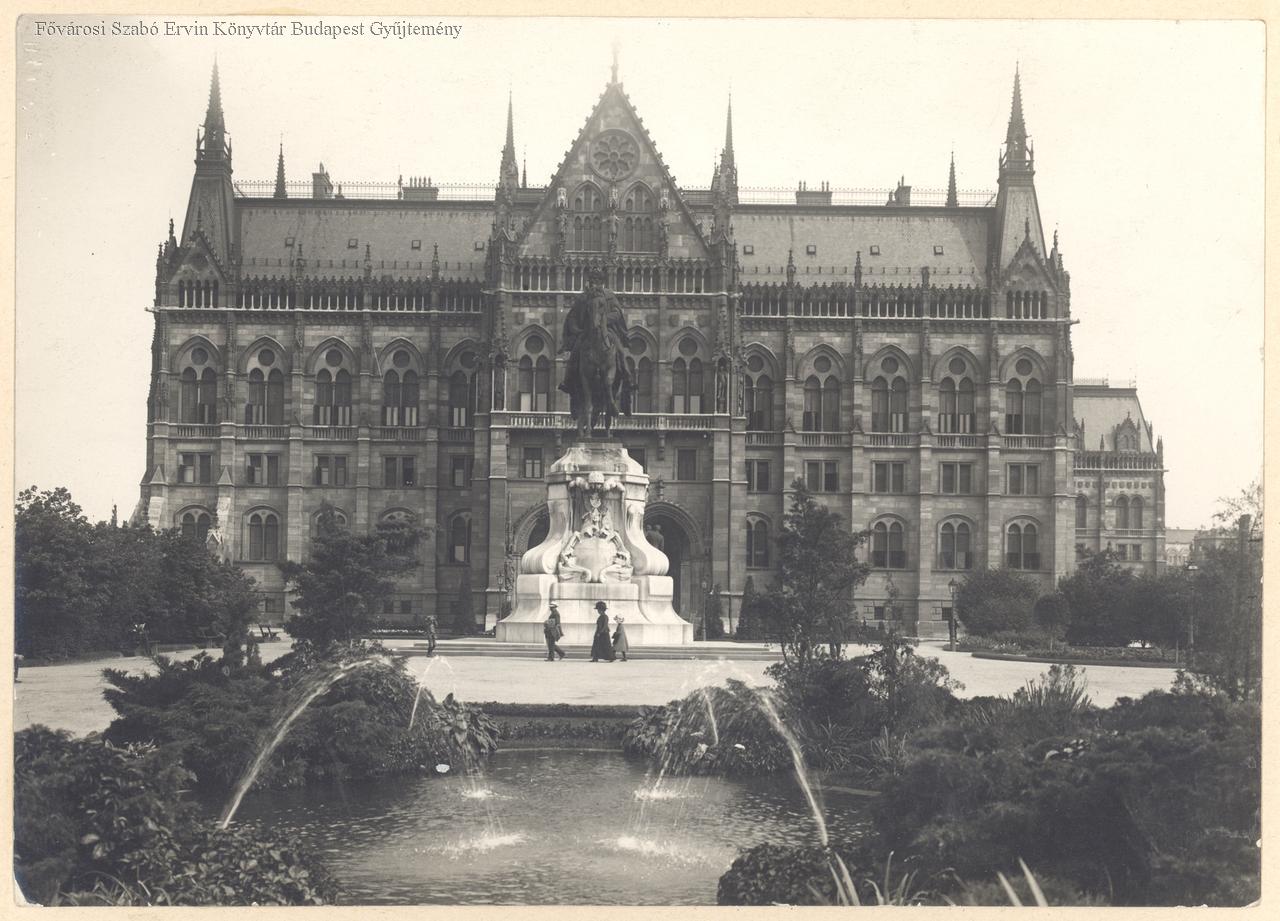 The statue of Gyula Andrássy was finally erected not opposite the main entrance of the Parliament, but on the south side of the building (Source: FSZEK Budapest Collection)

Lechner, following Palóczi, thought that two statues should be placed on Kossuth Square at the same time, as the area was long enough for one to stand in the south and one in the north. So he would have put Kossuth to the south, to the axis of the street from Szabadság Square, and to the north, to the axis of the Curia's building, he proposed to erect a statue of Lajos Batthyány. In his opinion, space should authentically express the entire history of the nation: Kossuth would symbolize successes, and Batthyány would symbolize the tragedies that are unfortunately but undeniably present. At the same time, the statues also referred to the two houses of the National Assembly: Kossuth from the lower nobility would have been in line with the House of Representatives in the south, and the aristocrat Batthyány would have been in line with the House of Magnates. The council of the capital, on the other hand, did not take this into account and in 1906, during the second sculpture competition, they designated the space in front of the main entrance as the site of the statue again.

János Horvay, who won the competition, finished most of the work only by 1918. Due to the size of the square, he came up with a whole group of sculptures depicting the members of the first responsible Hungarian government, with the figure of Lajos Kossuth in the middle. But as a result of the storms of World War I, it took another eight years to carve out the main figure. In the spring of 1926, before setting up the already finished group, Prime Minister István Bethlen himself spoke out against the decision of the Budapest City Council, and a debate began on the appropriate location of the statue.

Kossuth Square in the 1920s, without the Kossuth statue (Source: FSZEK Budapest Collection)

This then took place in front of the larger public, which of course was also reported in the press. In early June 1927, it was written that the statue was erected as a test in the place specified in the capital's resolution, and then 8 meters away. In both cases, it was found that it upset the balance of the square, but there was also a bigger problem: the extremely wide work completely obscured the main entrance of the Parliament when viewed from the axis of Alkotmány Street, and of course it also stood in the way of the processions during festivities.

Jenő Lechner also took part in the discussion, voicing his previous position that two statues should be erected at both ends of the space. Together with Béla Rerrich, a visual design was made in 1926, in which the monument was placed in the northern half of the square, at the mouth of Falk Miksa Street, facing south. Behind the statue, a flower bed would close the space, and later an elegant public building could provide a great background for the statue - at that time the plot was still empty. 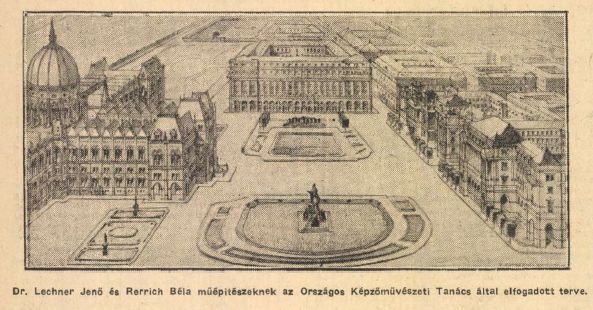 According to the ideas of Jenő Lechner and Béla Rerrich, they would have placed the Kossuth statue in the square like this (Source: Pesti Hírlap, 12 February 1927).

There were those who supported this proposal, such as art historian Ervin Ybl - a distant relative of Miklós Ybl -, according to him, coming from the city center, the wider, southern half of the square could stand as a garden in front of the main work, but it could also be interpreted as if the square was a church, at the end of which the work would stand as an altar. Interestingly, of the opponents, Antal Palóczi was the loudest, who - contrary to his previous plans - would have placed the statue in the axis of the main entrance. However, as a counter-argument, he could only raise an excessive restriction on traffic. 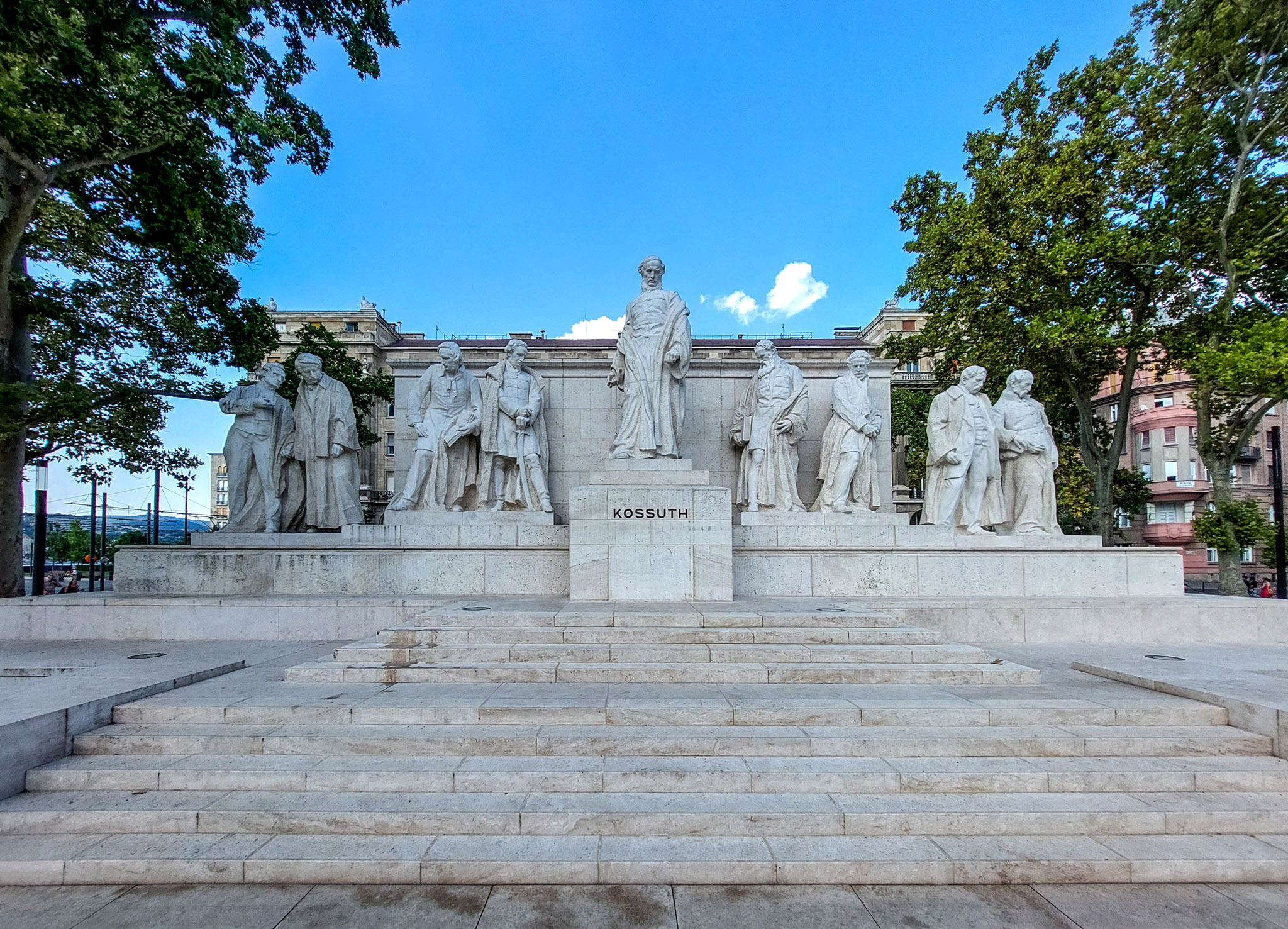 The Kossuth sculpture group was finally erected on the north side of the square in 1927. Although it was demolished in 1951, it has been re-carved and since 2015 it is in its original place again (Photo: Balázs Both / pestbuda.hu)

The group of sculptures was eventually set up according to the plans of the capital's gardener, Károly Räde, who transformed the concept of Lechner and Rerrich into a much more economical form. The monument was inaugurated on 6 November 1927. The building thought to be the background was built in 1929, it did not become a public building, but a tenement house built by the Magyar Állami Kőszénbánya Rt. Nyugdíjintézet [Hungarian State Coal Mine Co. Pension Institution] according to the plans of Béla Málnai and Gyula Haász. Opposite of it, in the other half of the square in 1937 a statue of Ferenc II Rákóczi was erected. 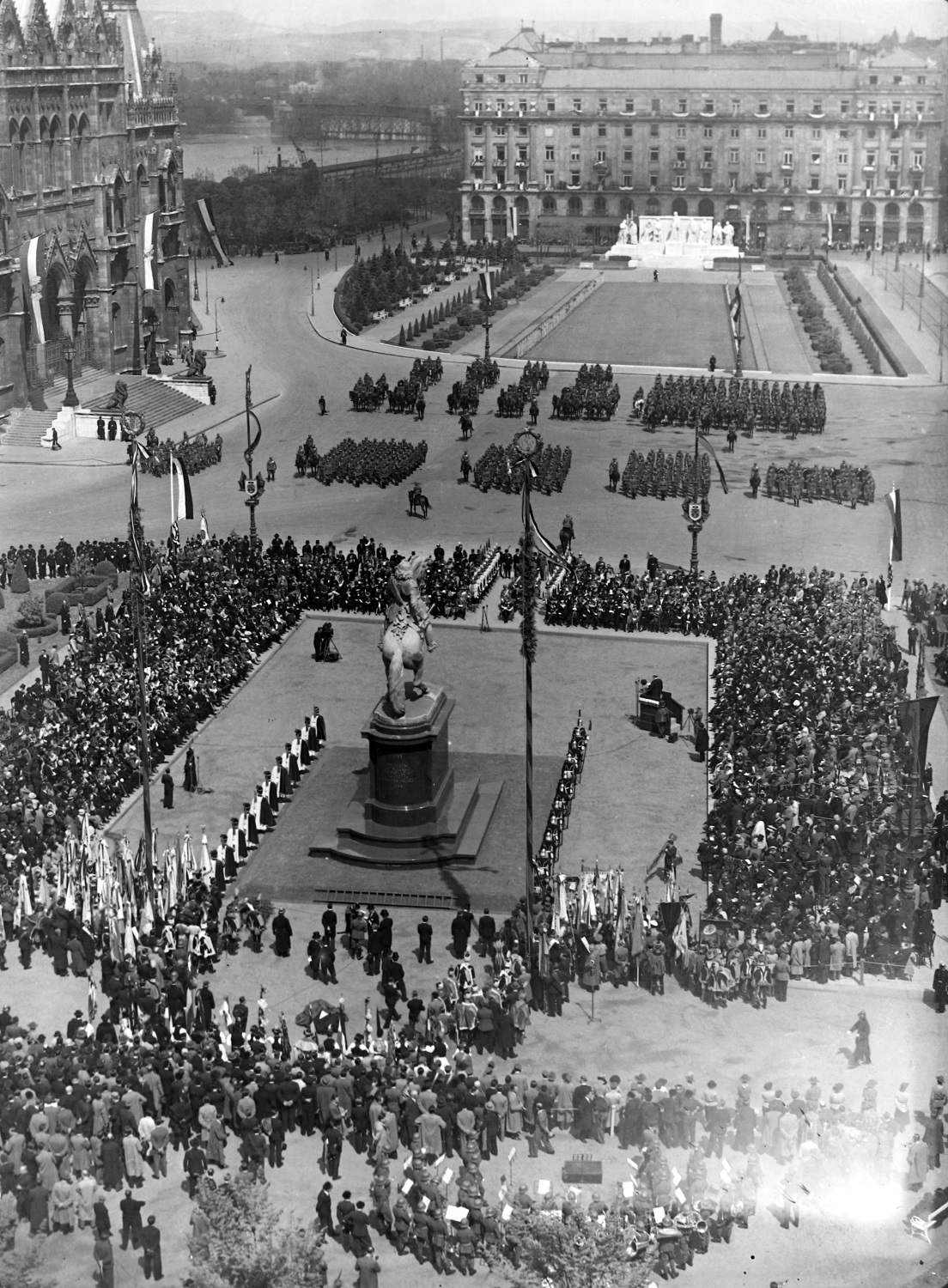 The Kossuth sculpture group was disbanded in 1951 because the communist power did not find it propagandistic enough. Since 3 March 2015, although it has been re-carved, it once again stands in its original place - which was choosen over long debates and multiple trials.