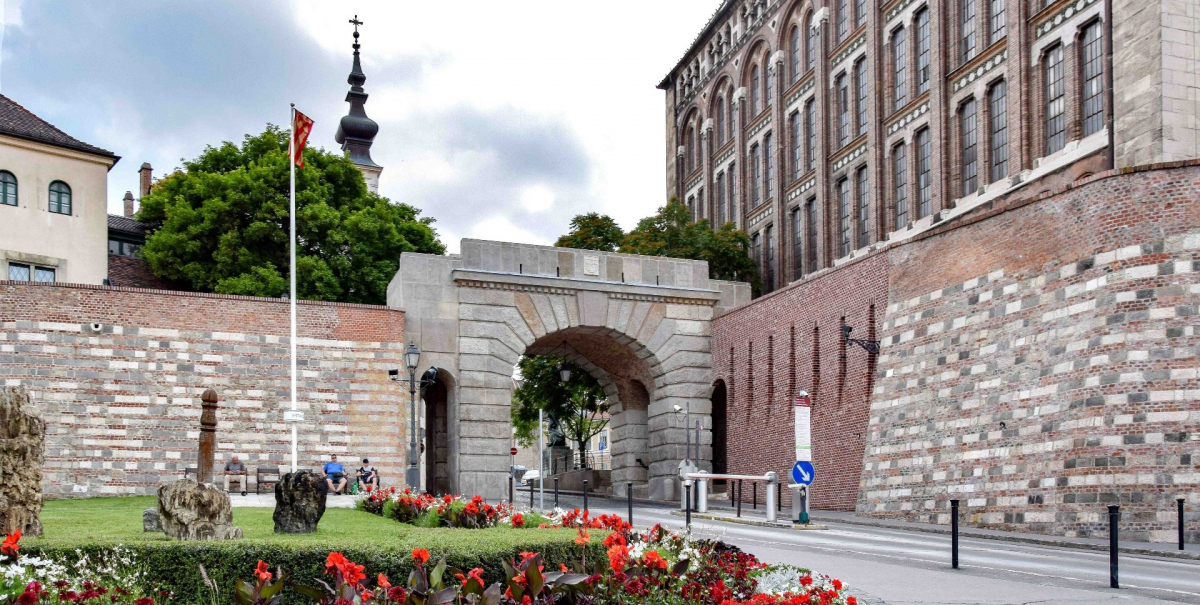 Eighty-five years ago, in 1936 the Vienna Gate of the Buda Castle was rebuilt. The plan had already been conceived six years earlier, but because of the economic crisis the financial backing could only be secured for that time. The occasion for the construction was the two hundred and fiftieth anniversary of the recapture of Buda, which was on 2 September 1686.

The rapid economic development at the end of the 19th century also affected the capital's transport system and the four gates of the Buda Castle were seen as an obstacle by the city authorities. The Ferenc József Gate on Hunyadi János Street, the Fehérvár Gate guarding the Palota Street, the Ferdinand Gate on the Royal Palace's western side, and the Vienna Gate overlooking Széna (now Széll Kálmán) Square, also fell victim to the new urban planning.

The Vienna Gate before its demolition in the early 1890s (Source: FSZEK Budapest Collection)

The medieval Vienna Gate was destroyed several times, but was rebuilt soon after each time: after the reconquest from the Turks and after the siege of 1849. But the gate built in 1850 did not last long, and was demolished in 1894 for the reasons already mentioned. However, after the Trianon peace treaty - when we lost the vast majority of our monuments - more attention was paid to our remaining values and their preservation: The Buda Castle Wall was one of them. 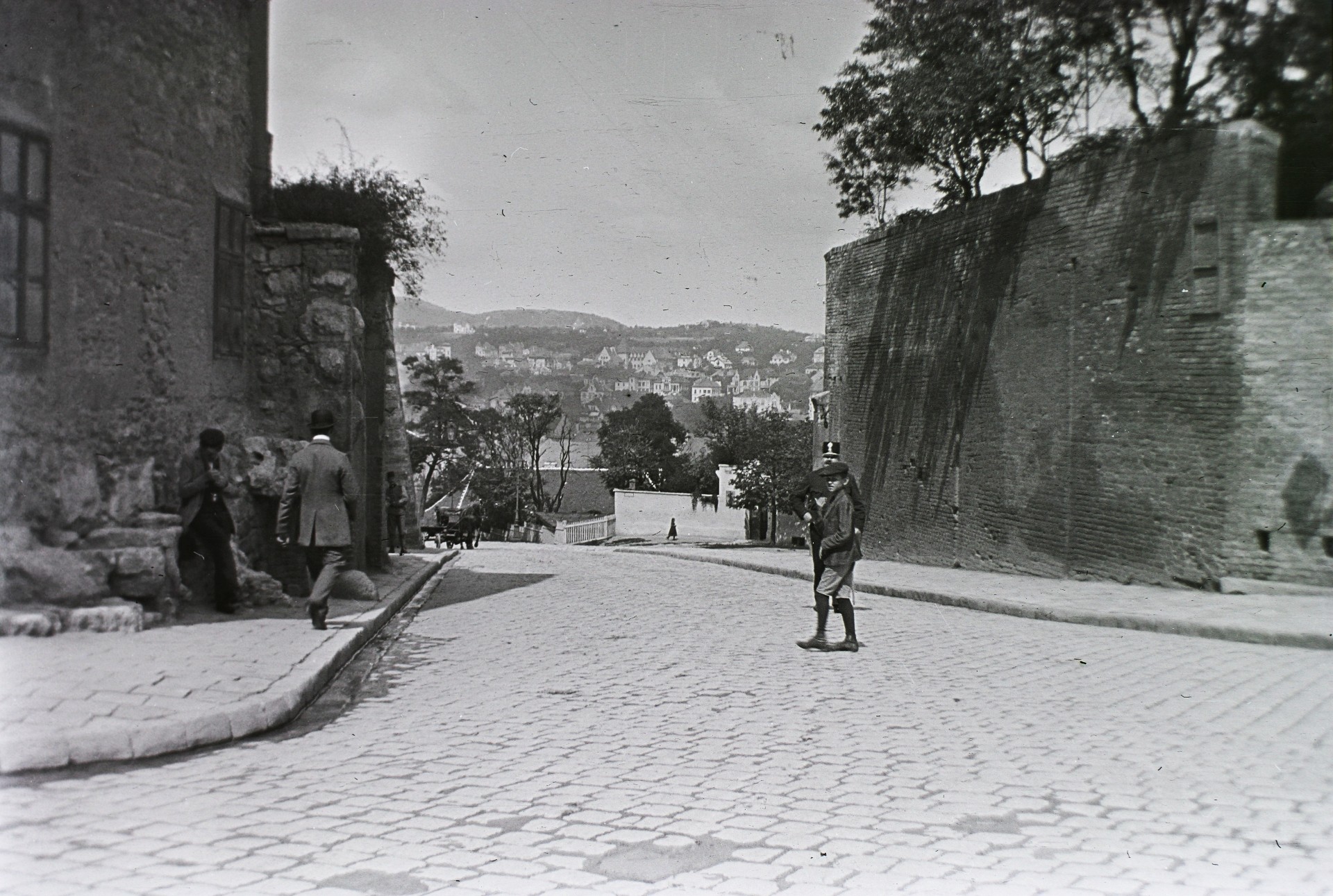 By 1929, the section of the wall facing the Tabán was repaired, and in 1930 the Capital decided to repair the Danube side to mark the tenth anniversary of the Governor's accession to power: the section from the Ilona Staircase (effectively the Fisherman's Bastion) to the former Vienna Gate was widened and named the Horthy Miklós Bastion Promenade.

The panoramic views are magical, so a lively flow of tourists was expected. It was therefore decided to rebuild the gate, which was justified not only for aesthetic but also for practical reasons: it was used as a bridge, and the footpath along the castle wall was led over the top of it.

The Budapest Public Works Council entrusted the design of the gate to Jenő Lechner. He was the nephew of Ödön Lechner, so he was interested in architecture since childhood. He researched the architectural heritage of the capital city intensively. He began this work by researching the history of the gate, even studying the engravings in the Museum of Fine Arts. Finally, together with the Council, it was decided that, although the gateway had many forms, the neo-Renaissance version, erected in 1850, was going to be restored because people still remembered it. 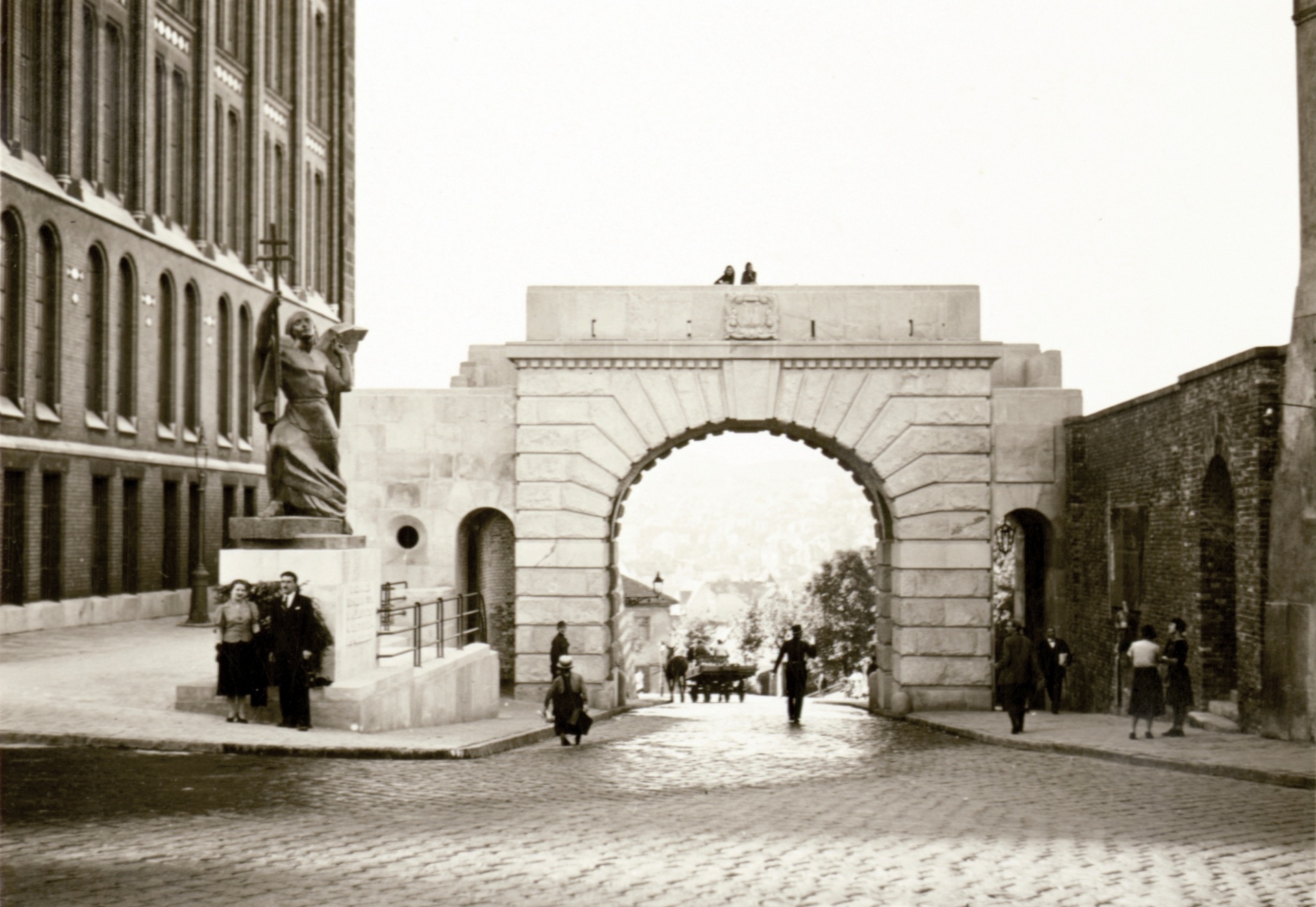 Yet the designer did not give the gate a completely identical shape: while previously it had one large and one small opening, Lechner designed two smaller pedestrian gates next to the semicircular large gate. He also increased the size of the gate: it is taller than the original and its central opening is a semicircle instead of a basket arch, making it wider so as not to impede increased vehicle traffic.

The width of the opening was based on the width of the openings of the Chain Bridge piers, which gave a width of 5.75 metres. The bridge underwent a similar renovation in 1914-1915, when its openings were widened. Smaller arches have also been opened up inside the rebuilt Vienna Gate, so that the gate is effectively supported by four corner pillars.

The changes were justified not only by the increase in traffic, but also by the fact that the proportions of the old gate were considered to be too small by the professionals. So Lechner made a compromise: the basic forms were recognisable from the previous one, but the new building had more beautiful proportions and a more harmonious appearance.

The gate is covered with quoins, which follow the arched opening and have a central accentuated keystone. The main parapet runs around the top of the building, with a dentil cornice and an attic above it. In the centre of the attic, the designer placed the coat of arms of Budapest: carved from square stone slabs and surrounded by leaf ornaments. 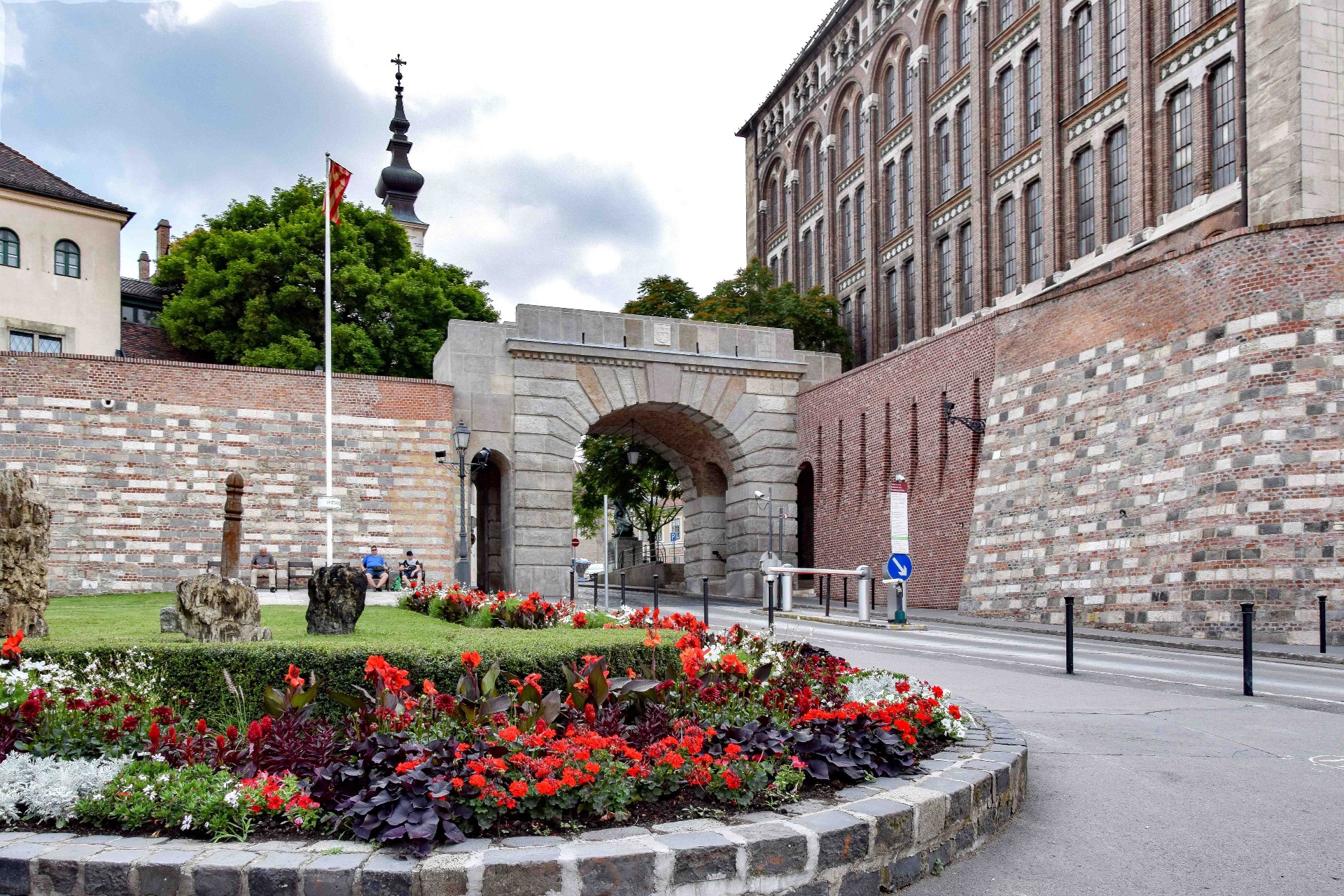 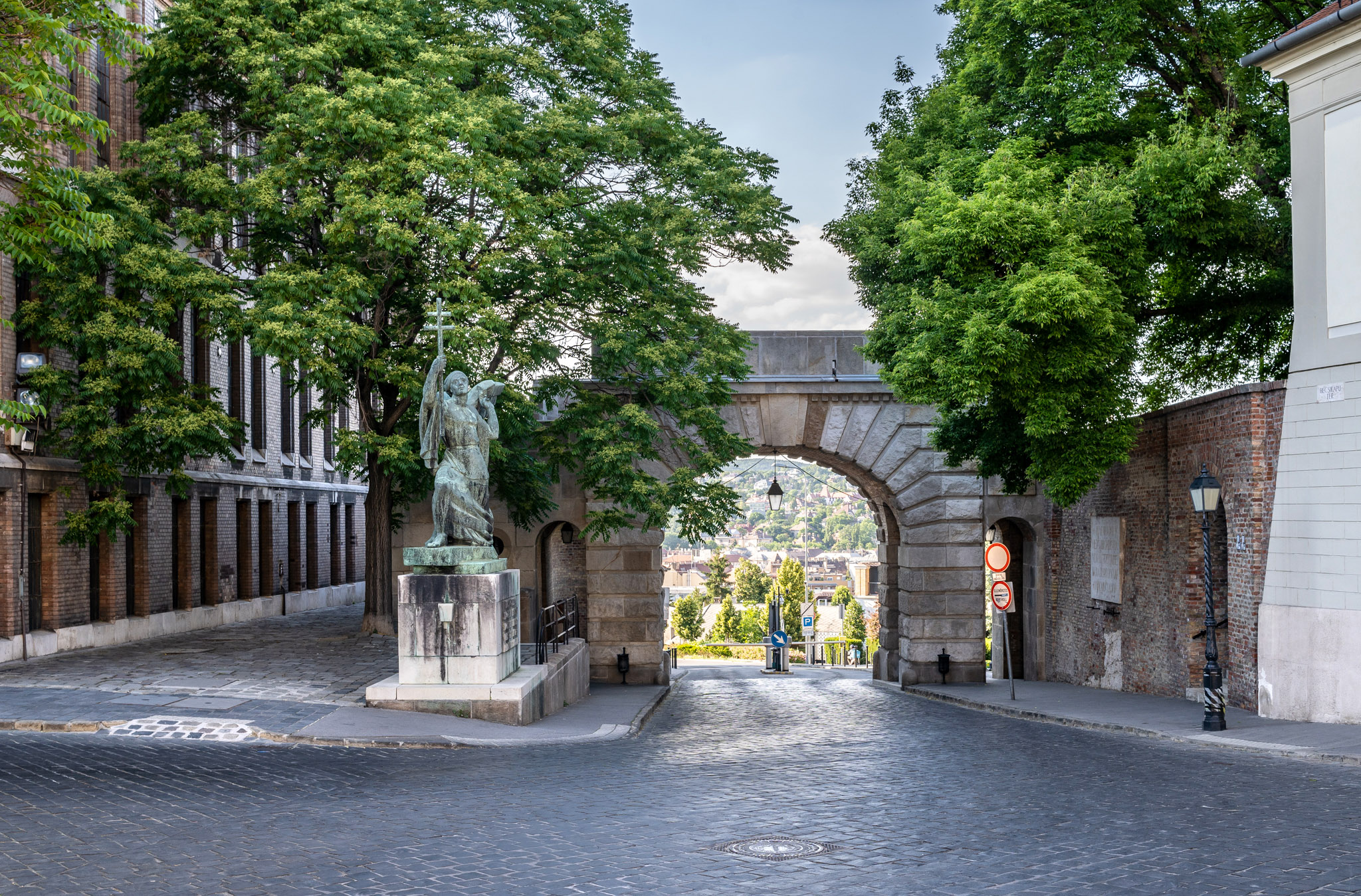 ...and from the Castle (Photo: Balázs Both/pestbuda.hu)

With the two side openings, Jenő Lechner's work was more harmonious than the original gate and actually more ornate, because the original did not have a dentil cornice under the main parapet. Its only flaw was that, due to the economic crisis, it was not completed for the originally planned jubilee of the governor and was not inaugurated until the autumn of 1936. Its inauguration was thus timed to coincide with the two hundred and fiftieth anniversary of the recapture of Buda, and thus a commemorative plaque was placed inside it, and Béla Ohmann made a bronze angel statue on the castle side.