A hundred years ago, bus traffic in Budapest resumed

In Budapest, after the First World War, bus traffic did not start again until 1921. One hundred years ago, electric vehicles first transported passangers between the Aréna, i.e. today’s Dózsa György Road and Apponyi Square, today's Ferenciek Square. Although many considered the racing vehicles to be a luxury, in the end bus transport gained a raison d’être in the capital.

The first buses in Budapest started in 1915. The first two buses were soon followed by two more, and the new mode of transport became increasingly popular in the capital. However, the buses could not run for long periods of time, as vehicles were stopped due to a shortage of petrol and tires caused by World War I. 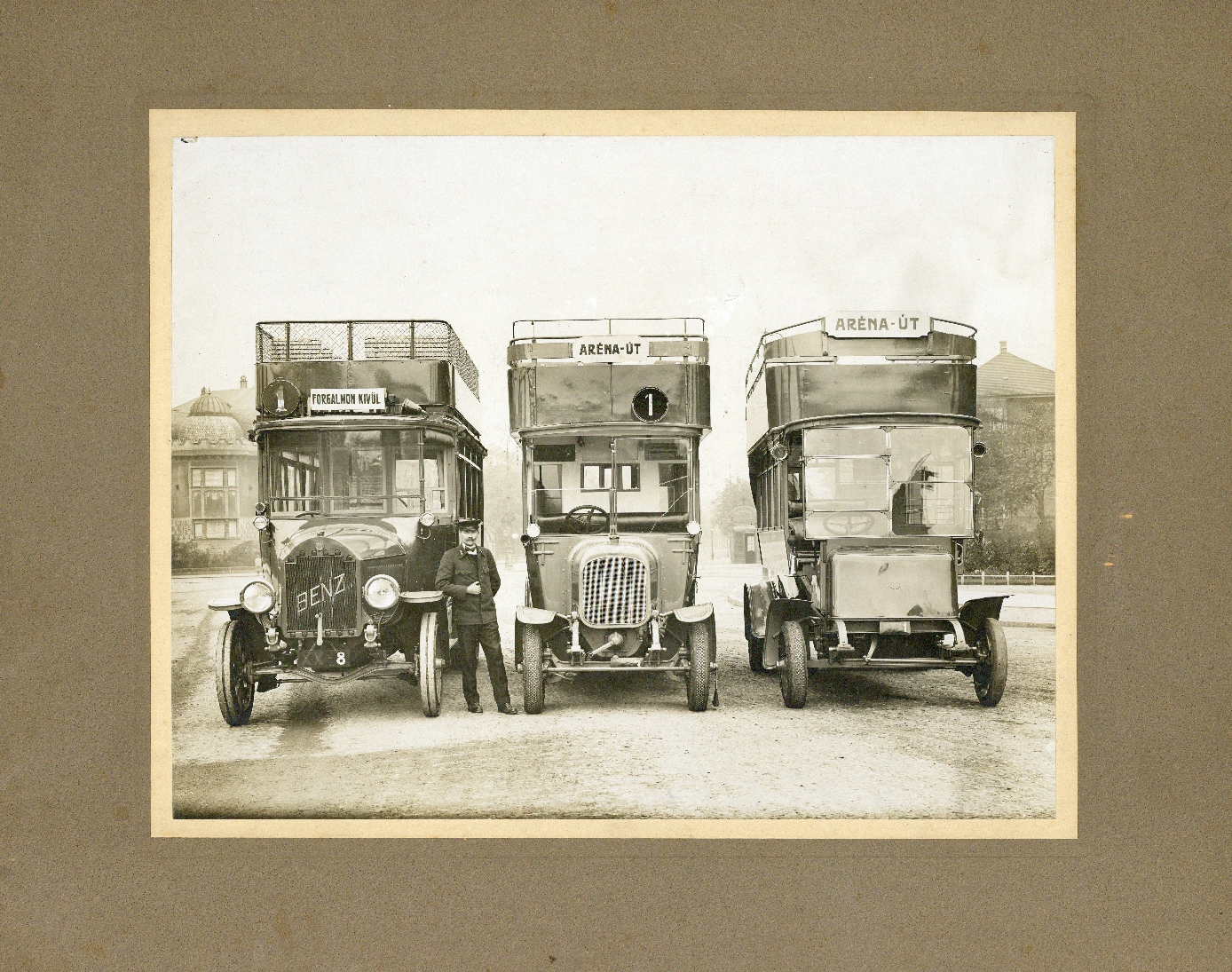 The first buses in Budapest in 1915 (Source: Hungarian Museum of Technology and Transport, MMKM.TFGY.1845.1)

It was not until the spring of 1921 that negotiations began to somehow restart buses in the capital. The capital city council owned ten buses, but the condition for starting them was to get petrol and tires for the vehicles. But there was a huge shortage of these. 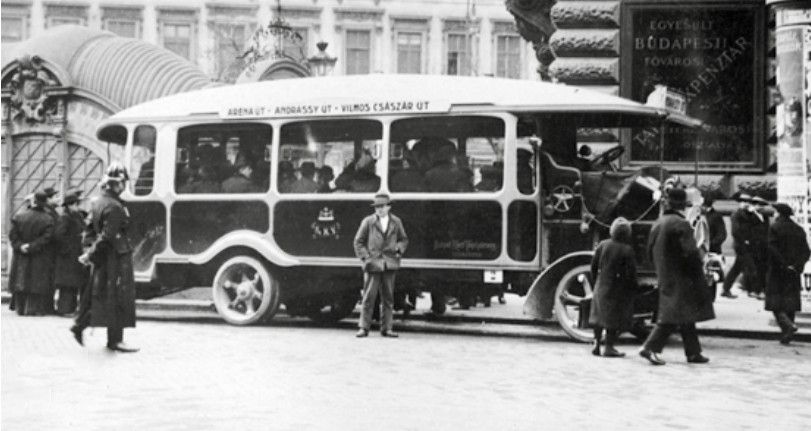 That's why the offer of the city of Vienna came in handy. There was no shortage of petrol in the Austrian capital, petrol buses could be operated and previously used electric vehicles became redundant. Thus, Vienna offered five used, 4-5 year old vehicles to Budapest, at a very reasonable price, with instalments. At the time of receipt, only a third of the price of the vehicles had to be paid, the rest 3 and 3 months later, and the offer covered not only the buses but also a number of parts. In Budapest, there was experience of electric buses, as such vehicles have been used in Hungary since 1915.

There was a big discussion at the meeting of the capital city council about the purchase of buses. On the one hand, the meeting took place too late, the deadline for the Austrian offer was approaching, so representatives felt they had no real room for maneuver. On the other hand, the Hungarian General Machine Factory also made an offer to provide electric buses together with the Tudor Battery Factory.

True, the Austrian buses were cheaper and were immediately available while for the Hungarian ones they would have to wait. But not even this convince many. Although the capital accepted the Vienna offer, the government had its doubts. The Pest Diary wrote on 19 June 1921:

“The secret plan of the capital was to release customs duties with the government so they would be able to show significant savings. There is talk in initiated circles that the duty itself would be more than two hundred thousand crowns, while transportation costs would amount to 65,000 crowns. Under these circumstances, they began to inquire as to the reason for the continued postponement of the import permit. It was soon learned that the government sees the purchase of the five old buses as a detriment to the poor Hungarian industry and wants to do everything in its power to cancel the purchase. ”

Nevertheless, the buses finally arrived in Budapest and were put into traffic on 24 September 1921. The electric double-decker buses ran between today's Dózsa György Road and Ferenciek Square. Only seated passengers could travel on the buses, and smoking was allowed in the upstairs, open area. 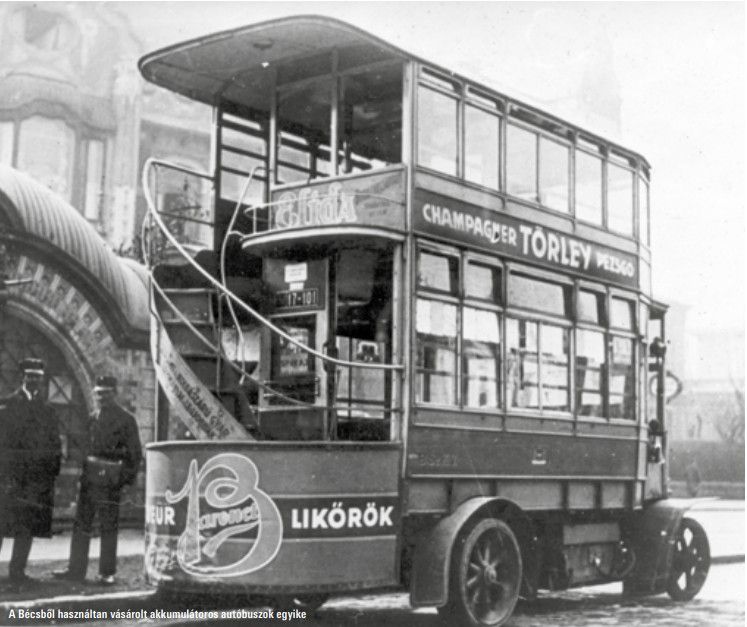 Electric buses purchased from the city of Vienna were put into traffic on 24 September 1921 in the Hungarian capital (Source: bkv.hu)

The buses were a huge success in the first time. According to reports, the buses were constantly operating at full capacity and were profitable in the first period, producing a profit of 150,000 crowns by March 1922. The attitude of the people of Pest to the buses is well illustrated in the 4 October 1921 issue of Pesti Hírlap:

“And in the cheerful colour of the radiant autumn, the new bus appeared before us at the Liget end of Andrássy Avenue, where hundreds and hundreds waited patiently for their turn and to take their seats in the bus, which seduced the forgetful citizens of Pest with the charm of novelty. The kids sat down in the leather seat with happy excitement and the granddads happily paid the ten crowns, not regretting the money for the Sunday fun. Maybe I was alone with my melancholy grief among the people on a cheerful Sunday, who sadly thought that the bus, which was the usual, unanimous means of transport in the big foreign cities before the war, was only a way of entertainment for us, and that even now only three old culled buses from Vienna transported passengers on one route here. But we have become very poor, we should be glad that if only for Sunday fun, but still here are these three buses, an indication of a happier future that is not future for more fortunate nations. ”

Of course, not everyone liked the traffic of huge vehicles. The racing buses were seen as dangerous, as road-destructive monsters. They complained that they were always crowded and that passengers were also constantly harassed by inspectors who, according to critics, boarded vehicles at almost every second stop. Many already considered buses to be an unnecessary luxury, as, they said, the tram, taxi and rental car were there. 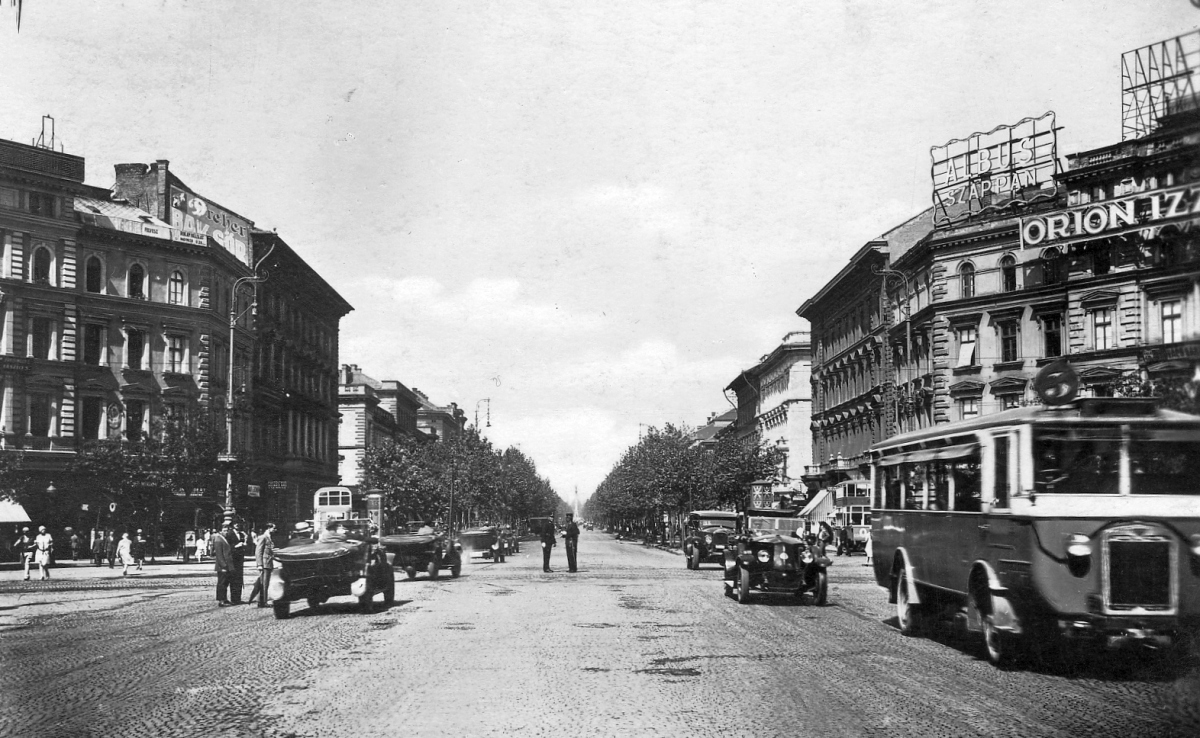 Of course, the Székesfővárosi Közlekedési Vállalat [Capital Transport Company] - the operator of the buses - did not agree with this. The buses, they pointed out, were travelling at a speed of only 12 kilometers per hour, which is not exactly a race, and rather bad roads ruin the buses, and not the other way around.

Buses eventually slowly became an integral part of transport in the capital. The number of buses increased despite the fact that due to inflation, the operation, despite continuous price increases, was already making a loss. The Székesfővárosi Autóbuszüzem [Capital Bus Factory] became independent in 1923, by which time petrol-powered vehicles also appeared on the roads of the capital, and from 24 October 1924,­ a bus also traveled to Buda via the Chain Bridge. 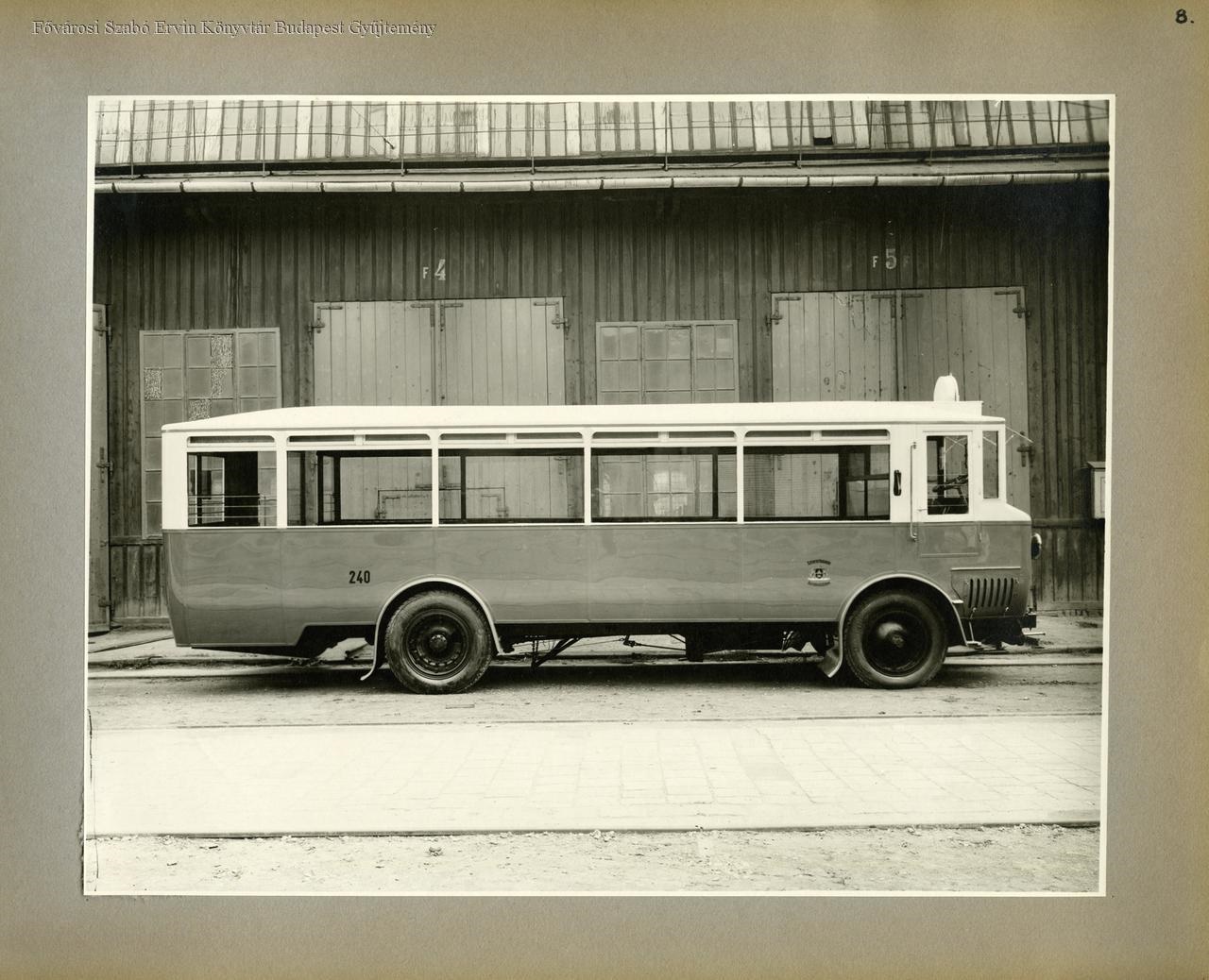