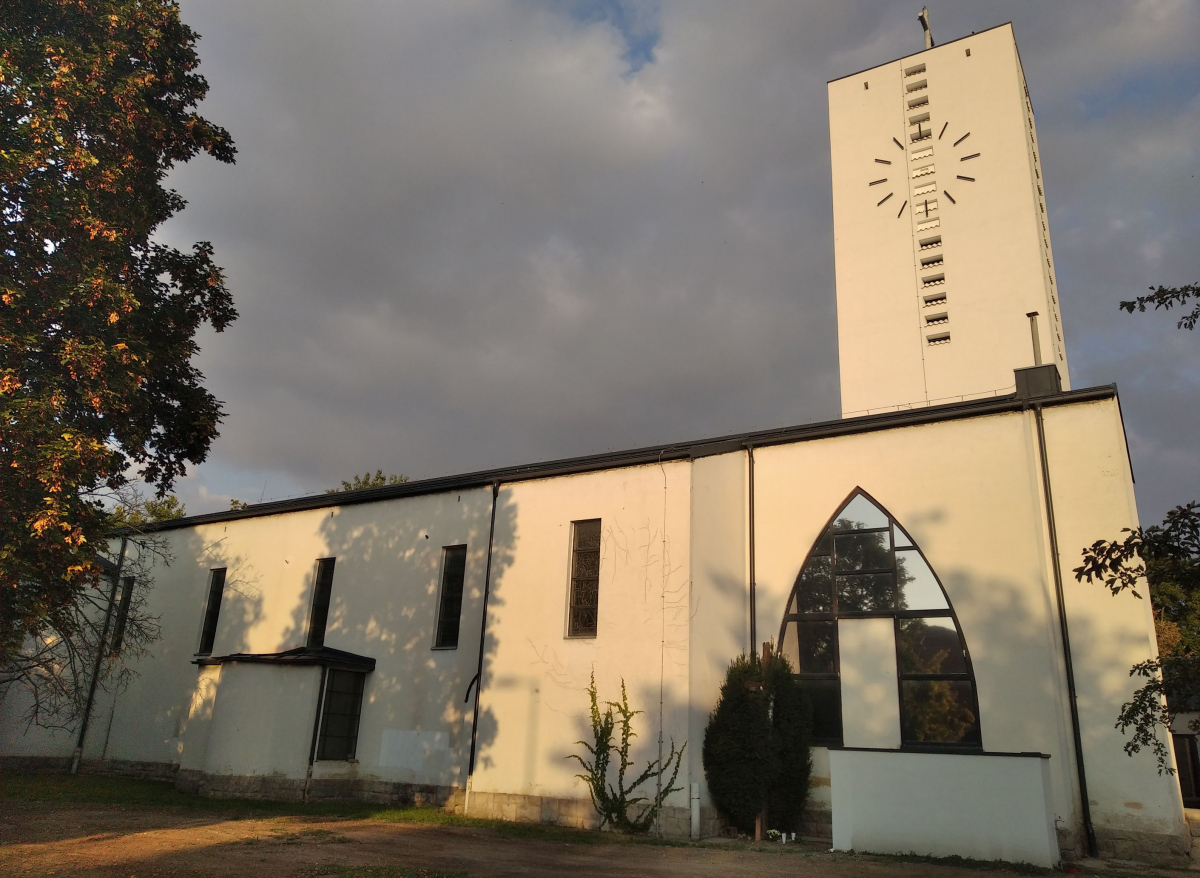 Modern, yet traditionally Hungarian - the Church of St. Michael in Albertfalva is 80 years old

September 29 is the feast of St. Michael the Archangel, the most popular, most often depicted angel. He was elected patron of several churches in Budapest, the youngest of which was the parish church of Albertfalva, consecrated in 1941. The modern, yet traditionally Hungarian building has recently been expanded with a new community house.

Albertfalva was named after the husband of Queen Maria Theresa's daughter Christina, Prince Albert of Saxony-Tessen. The settlement formerly belonging to Budafok became administratively independent in 1828, but its own parish was founded only at the beginning of the 20th century under the rule of the Diocese of Székesfehérvár. The first Mass was held at the old school on Christmas 1922, but it was not until 1928 that the parish received its own priest in the person of János Bergendy. Due to the rapid growth of the population, the need to build a church soon arose as well. 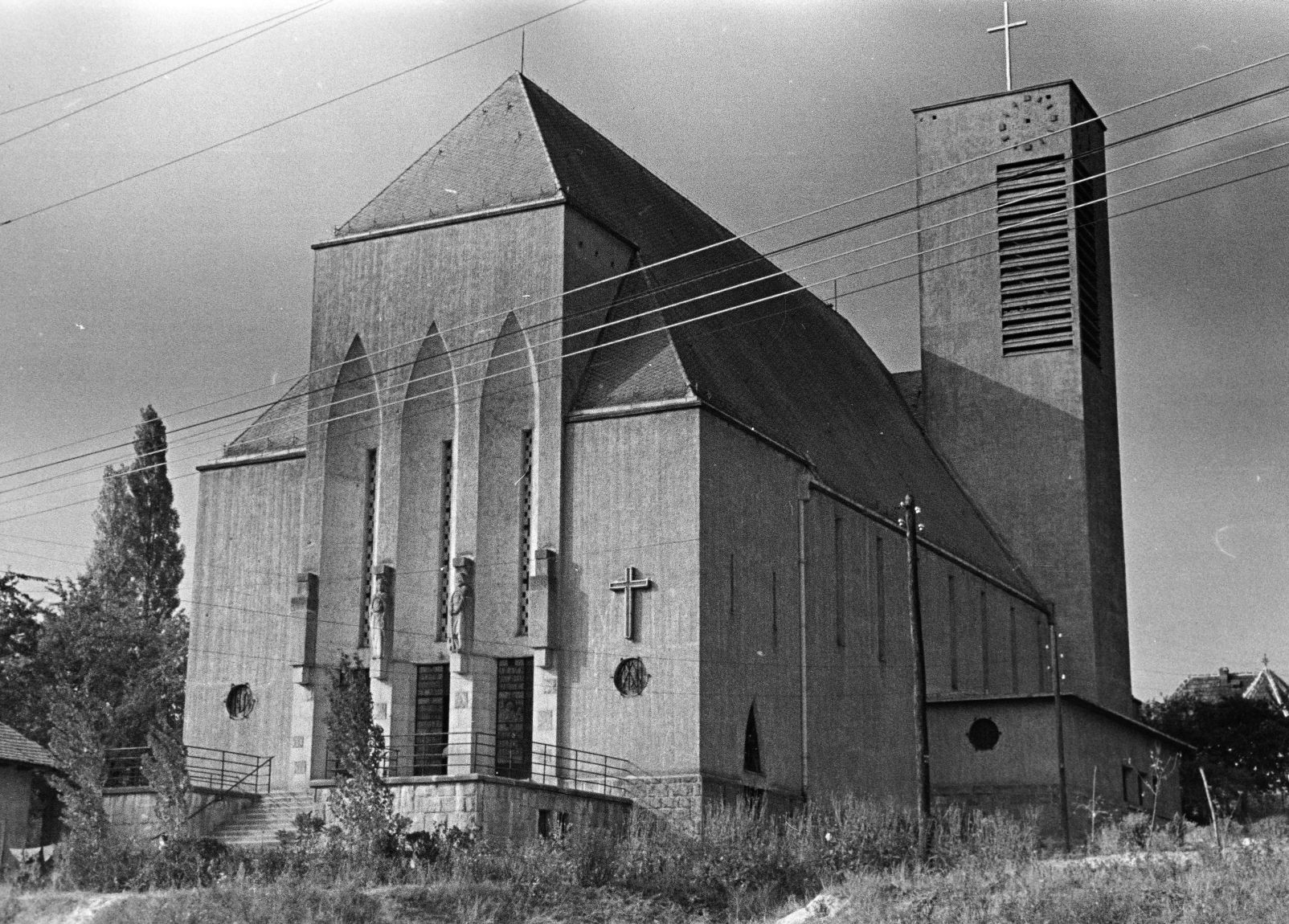 A fund-raising was organized for this purpose, which was directed by Béla Doroszlai, who replaced Bergendy from 1933. It was so successful that it took only two years to build the parish. However, the construction of the church was approved by Bishop Lajos Shvoy of Fehérvár in 1939 only on the condition that the plans were prepared by Jenő Lechner.

The explanation for the unusual stipulation is that not long before Lechner also designed a church in the Remetekertváros belonging to the 2nd District, which was extremely popular with the bishop. Lechner, of course, was pleased with the new assignment, but due to the progressive deterioration of his vision, he was unable to fulfill the assignment alone, so he called his son, Jenő Lechner Jr., who was also an architect for help. 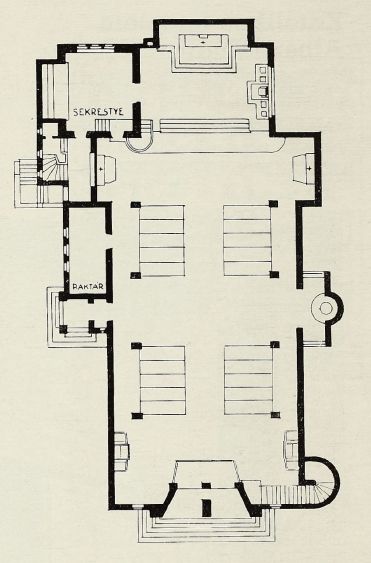 The St. Michael's Church has Gothic reminiscences, but it is basically a modern church and has a single nave and a straight sanctuary. To the longhouse divided by pillars, which can accommodate a thousand people, there is a sanctuary in the south, a baptismal chapel in the middle of the west side, and a semicircular mass of stairs leading to the gallery at the end facing the main façade. 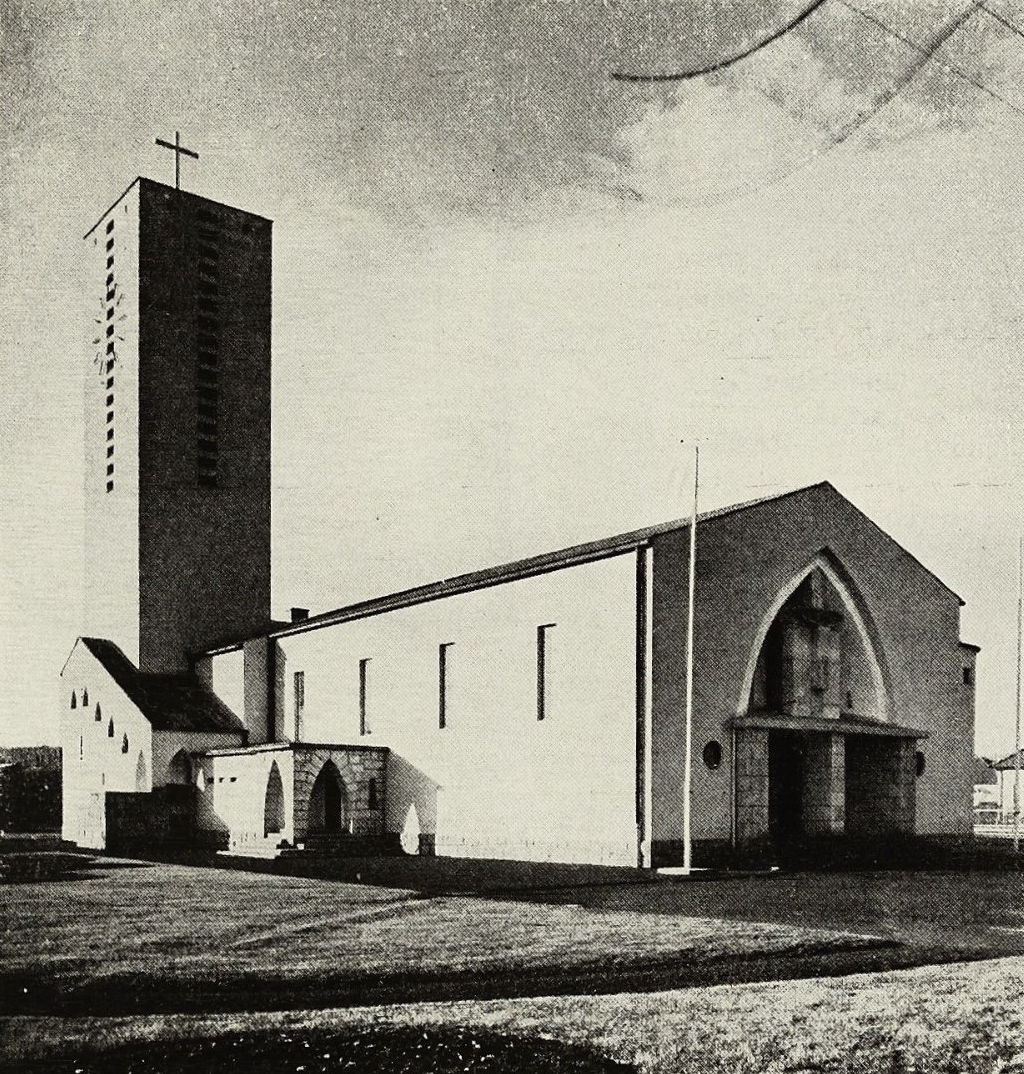 The varied movement of the architectural masses can truly be observed on the eastern façade, as the tower and the staircase in it leading to the oratorio are connected to its end by the sanctuary. 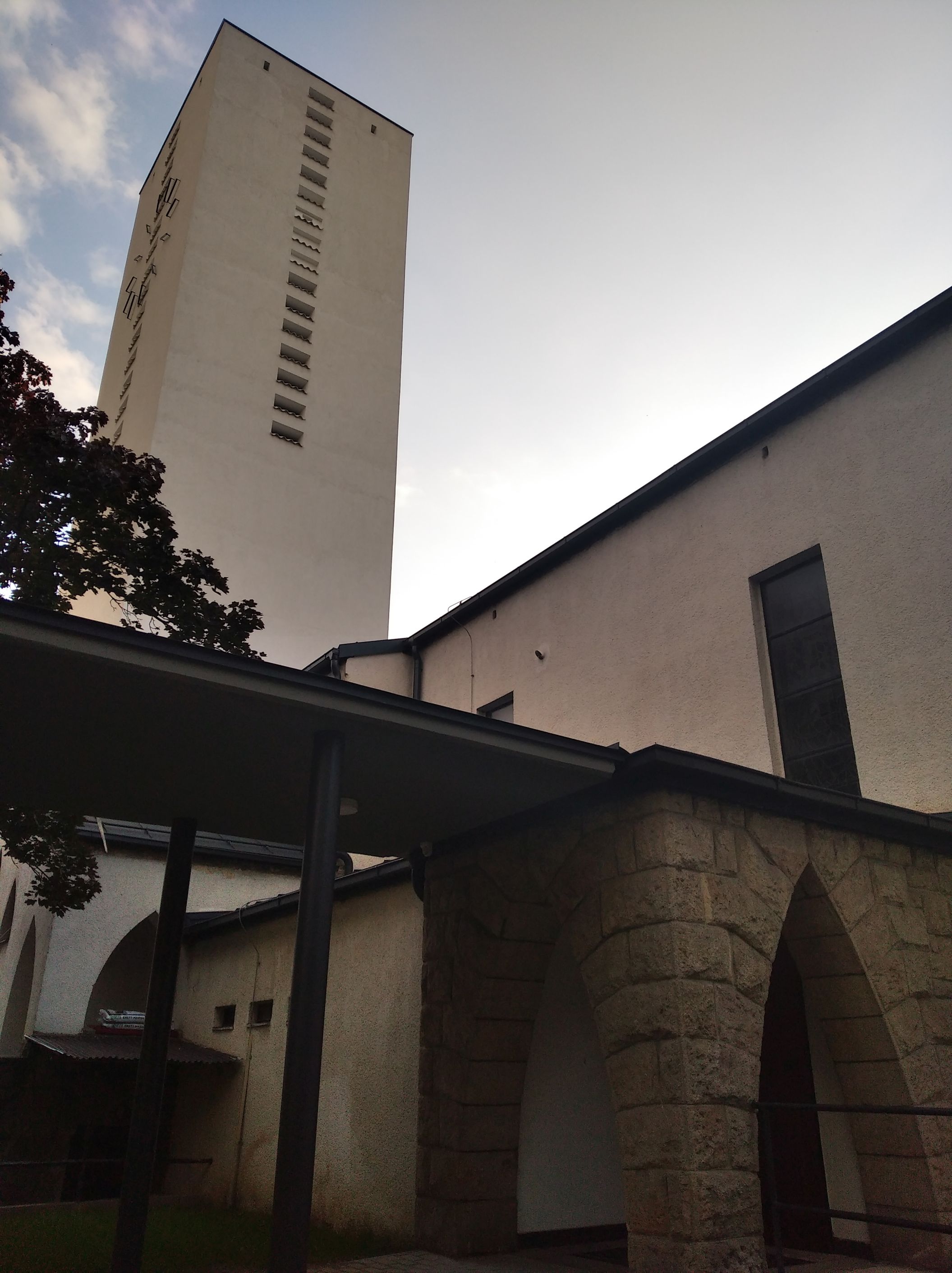 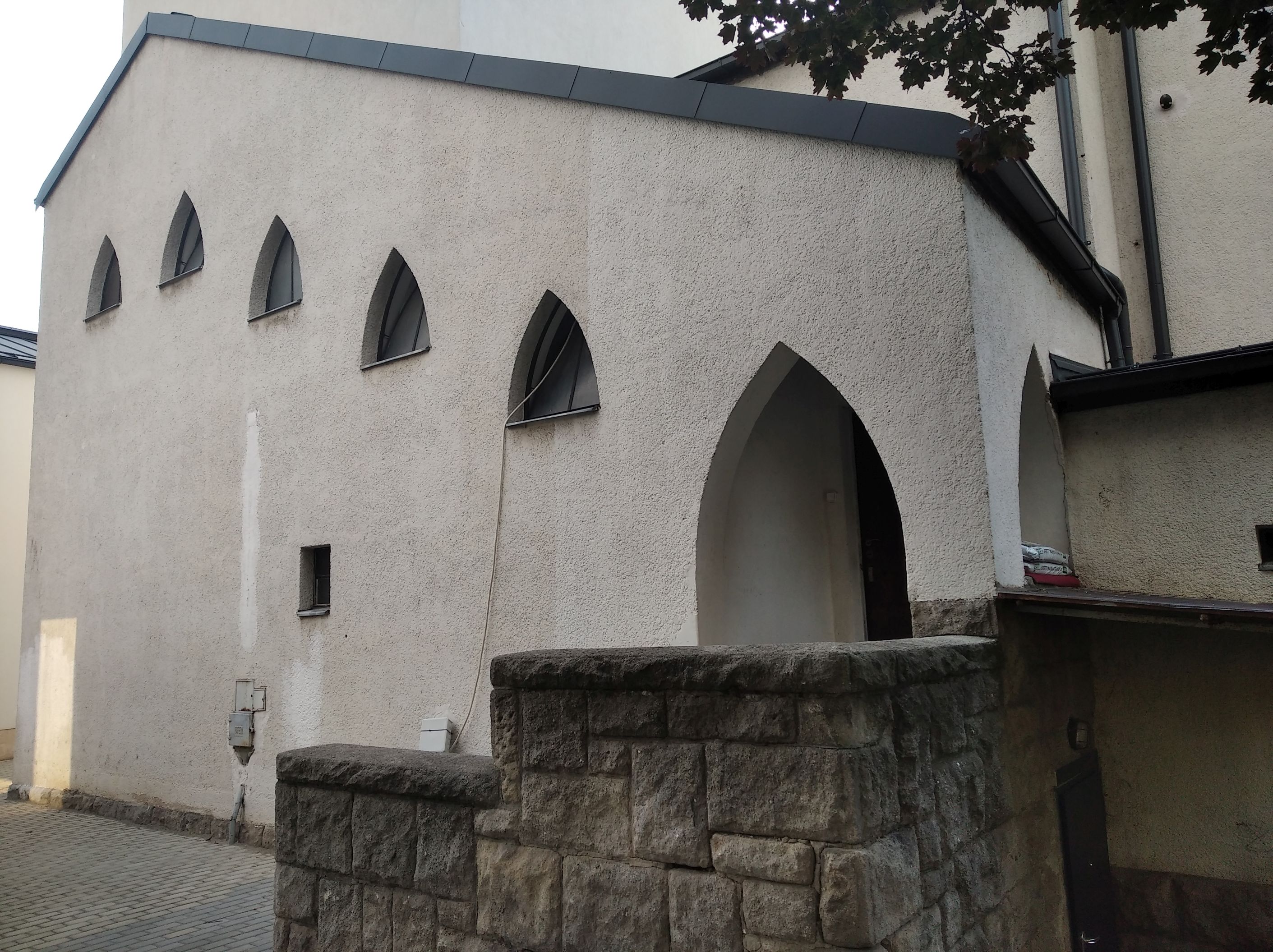 The staircase of the oratorio (Photo: Péter Bodó / pestbuda.hu)

The elementary geometric bodies indicate the influence of modernism, while the apex arches cut into the reinforced concrete pillar frame that gives the structure of the church are expressions of Lechner's Hungarian style. According to the architect, this form is connected to our eastern roots, because the peaks were also common in the palaces of the Persians, who were considered to be related people.

At the same time, ecclesiastical architecture has also merged with the pointed arched Gothic style in people’s minds. The pointed arched pillars separate the main nave and the corridor-like aisles, and at the top they intersect into the stepped-rising ceiling, whose brown-stained pine beams are a very imaginative solution and also signal the architect's search for Hungarian style. 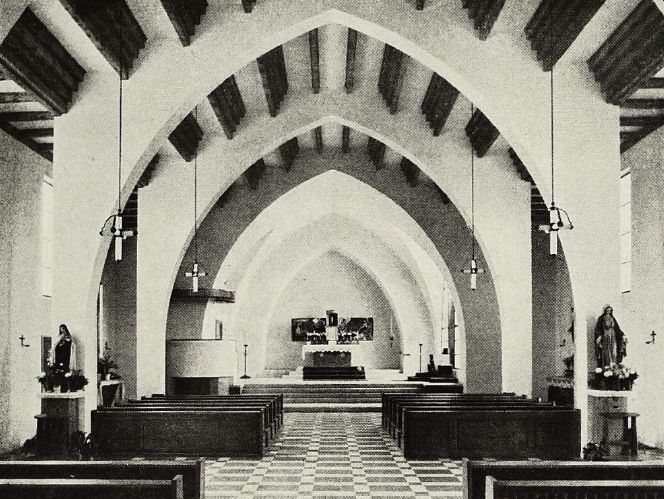 The original interior with the pointed arched pillar frame and the stepped wooden ceiling (Source: Tér és Forma No. 12, 1941)

The exterior also combines modernism with pointed arching: the natural stone pillars of the lined, sloping gate that open in the middle of the main façade hold a huge pointed arched window, which is split in half by a wide divider, leaving only a narrow wedge for the window panes. In front of the divider was originally a crucified relief of Christ, for which Barna Búza made additional figures in 1951. 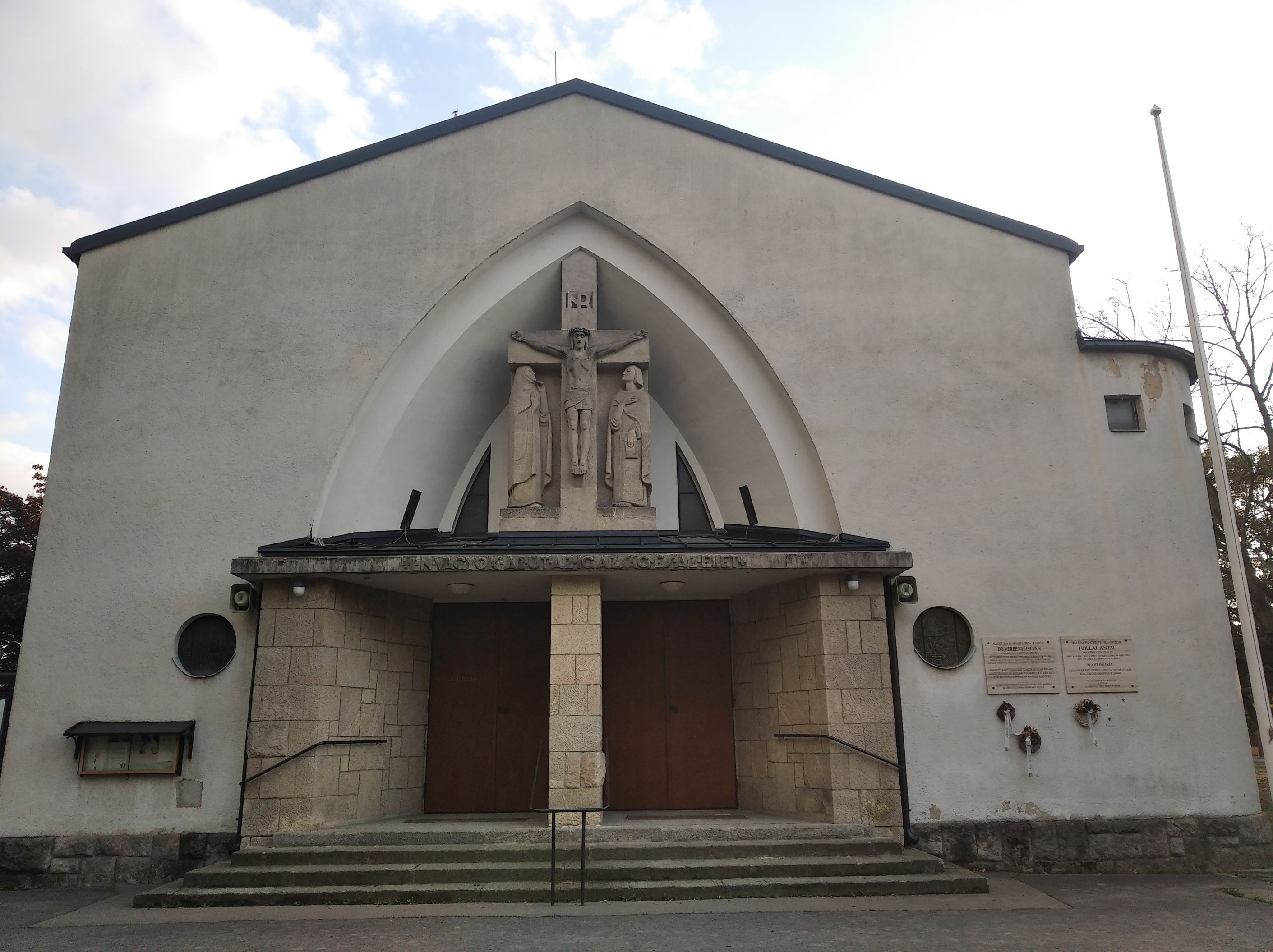 The unstructured, white-plastered façade of the main façade opens with a small circular window just next to the gate, and this puritanical look is in line with the functionalist objectives of modern architecture, which focused on practical use and low-cost feasibility. In the middle of the east side façade, the side entrance also opens from a stone-covered, arched foyer. 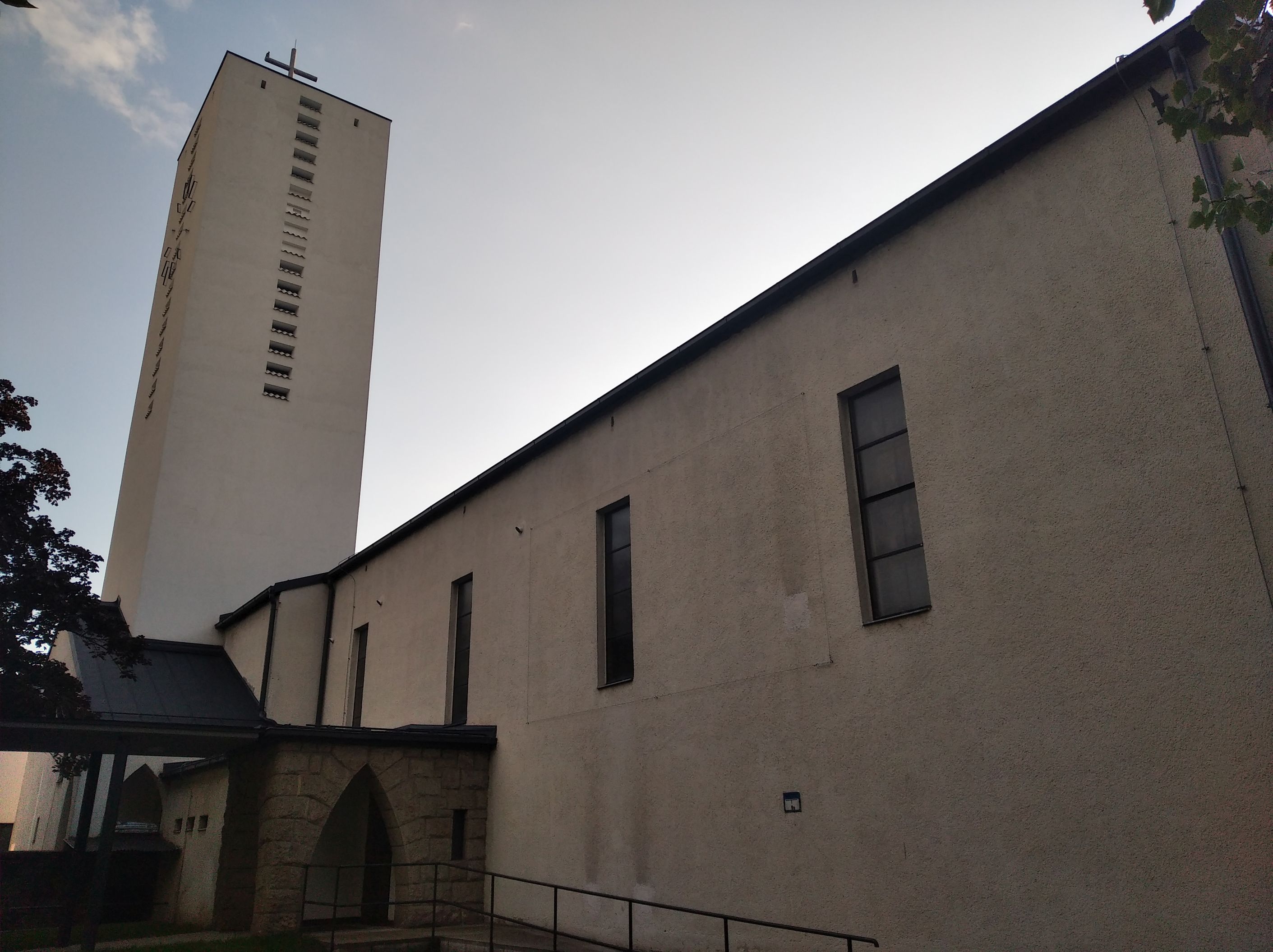 The location of the foyer and the staircase leading to the oratorio is related to the mapping solution of the medieval Szekler churches, with which the designers also wanted to express the Hungarianness of the modern church. On the west side, the huge arched window opening onto the sanctuary is worth mentioning. 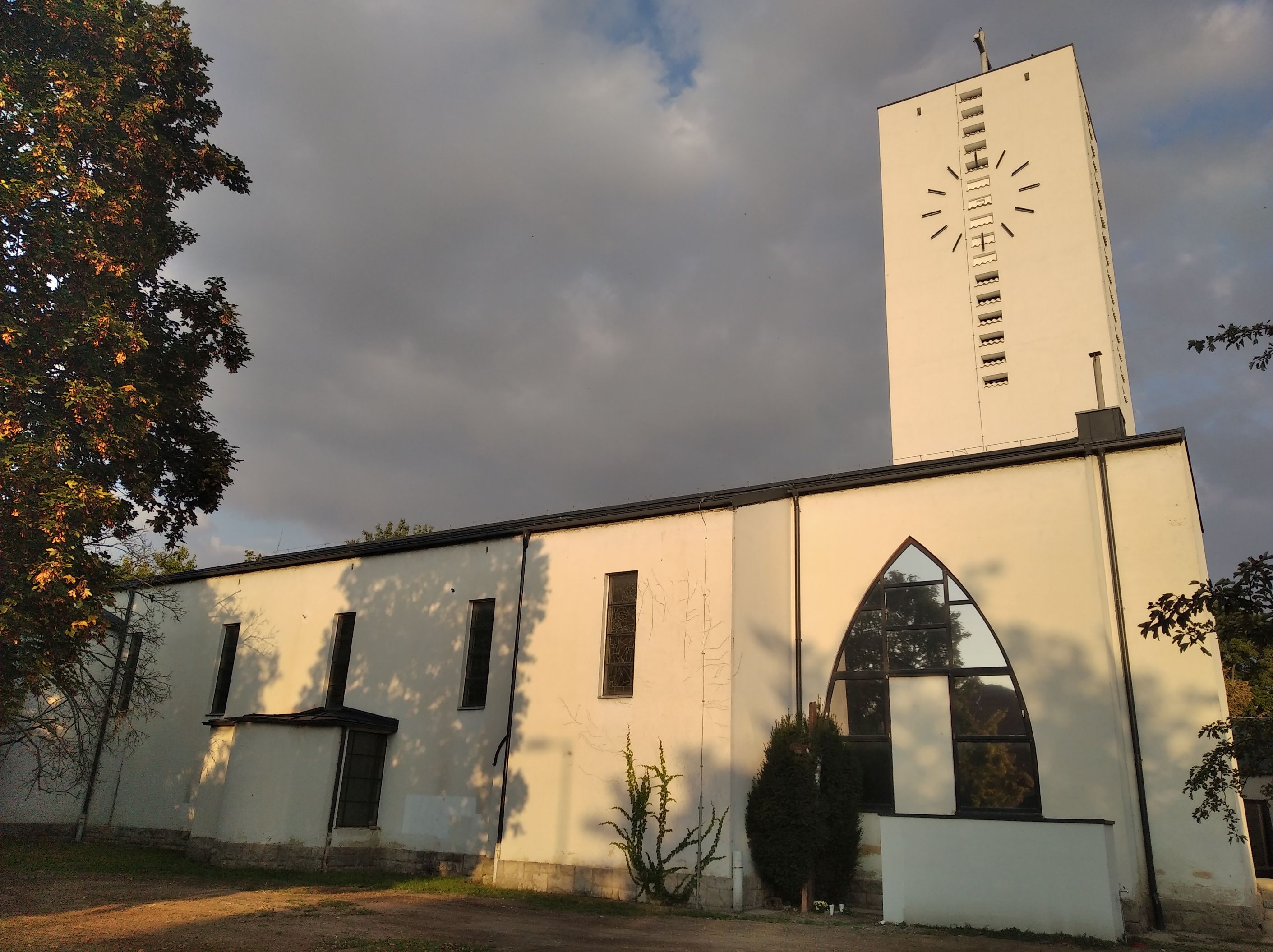 Stained glass window with one of the Eight Beatitudes: Blessed are the poor in spirit, for theirs is the kingdom of heaven (Source: St. Michael's Parish of Albertfalva, albertfalviplebania.hu)

The tower is organically connected not only physically, but also in style: the mass of undivided columns and its ornate white walls also follow modern aesthetics, the imaginative manifestation of which is even a set of small bell windows and a clock face lined up in the center axis of the tower.

According to the original plans, a pyramid-shaped helmet would have been placed on the tower, but due to the Second World War, this did not materialize in the end - although perhaps the overall picture of the building is even more modern this way. The windows of the staircase that clings to the tower, on the other hand, form the same apex arches that stand above the gate, albeit without a divider, so the dual style also appears here.

The elegance of the church lies in the beauty of the proportions, the harmony of the lines and planes. Due to the sharp boundaries of the masses, an interesting light-shadow play develops on the white surface, which is also echoed by the checked tiles of the interior. Its interior is decorated with works by famous artists, the statue of St. Michael was made by Búza Barna, the stained glass windows were made by Béla Kontuly and Sándor Unghváry, and there is Unghváry's painting Our Lady of Hungary, which ornated the main altar of the Eucharistic World Congress of 1938. 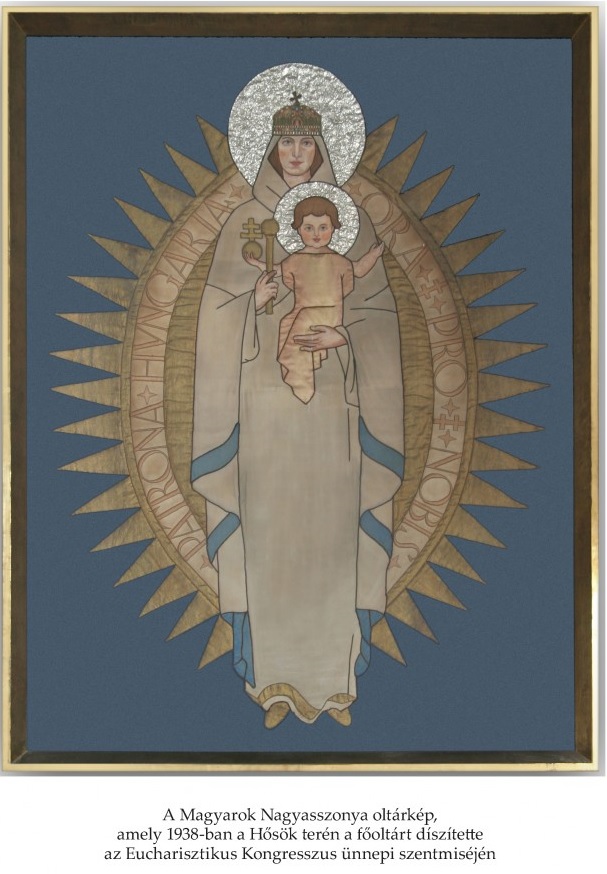 Altarpiece of Our Lady of Hungary (Source: St. Michael's Parish of Albertfalva, albertfalviplebania.hu)

The foundation stone was laid on the Sunday of King Christ in October 1940, and construction work began on 7 October 1940. The church was consecrated by Lajos Shvoy, the county bishop of Székesfehérvár, on 5 October 1941. Fortunately, the parish life is extremely active, which recently prompted the Parish to build a new Community House. 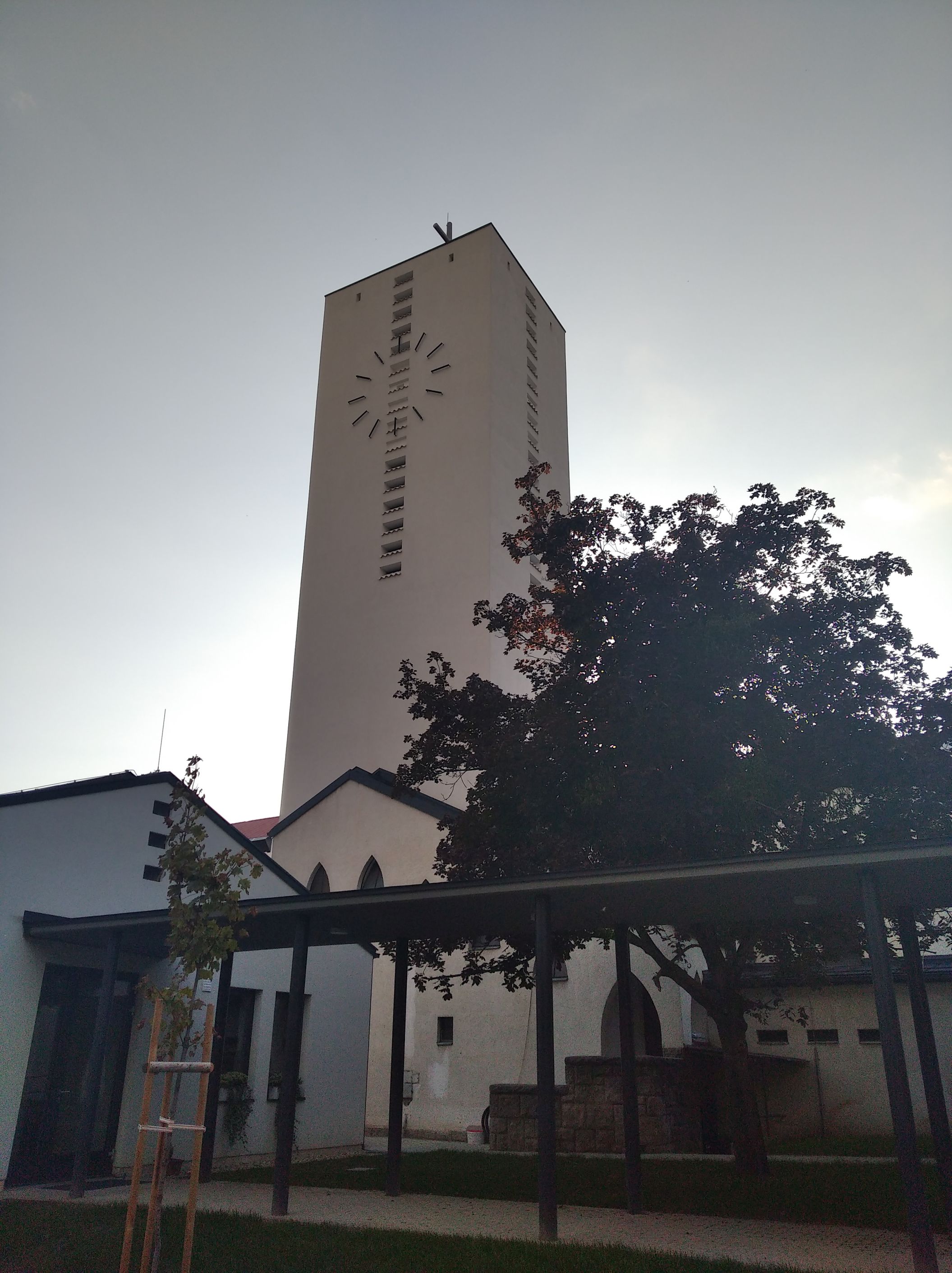 The ground floor building designed by Prím Építő Kft. is connected to the eastern side entrance of the church by a covered corridor. It also fits perfectly in its style, with the same tiny windows on its white walls as on the church spire. Yet it stretches modestly beside it, the designers expressly intending that the building not compete with the church.