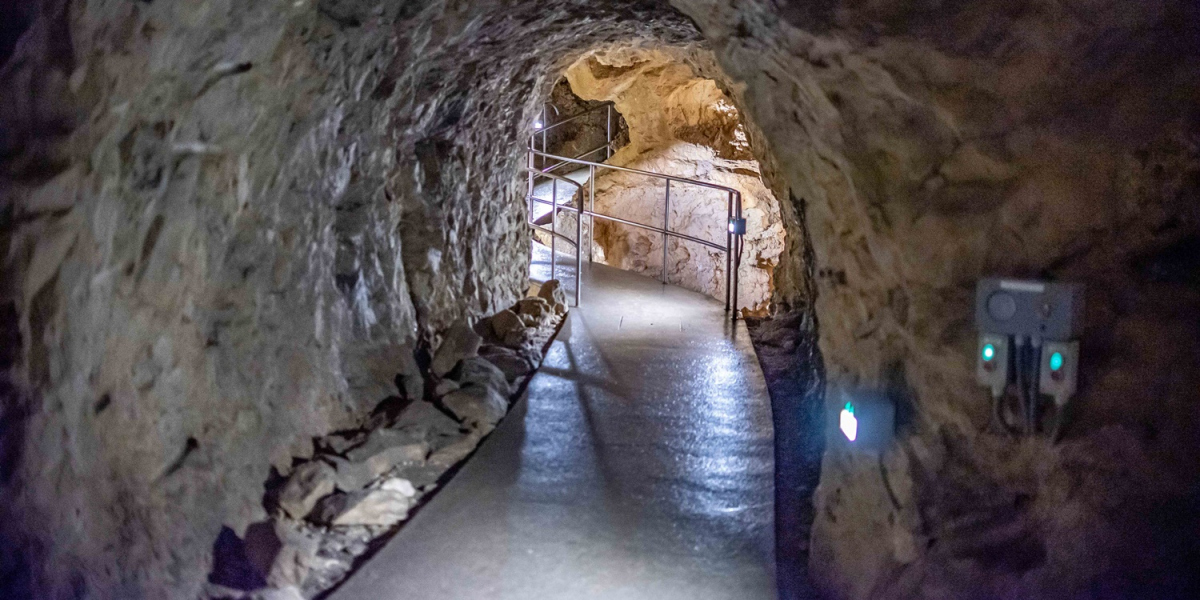 In addition to its built sights, Budapest is also a unique place in the field of natural formations, as there are several caves in the city itself. The national cave register lists 175 caves and fissures in the territory of Budapest, among which there are many caves of a few metres, while the largest of all is the Pálvölgyi Cave system with its route system of more than 27 kilometres. The Szemlő-hegyi Cave is also more than two kilometres long, and although it was discovered as early as 1930, it only opened to visitors in 1986. 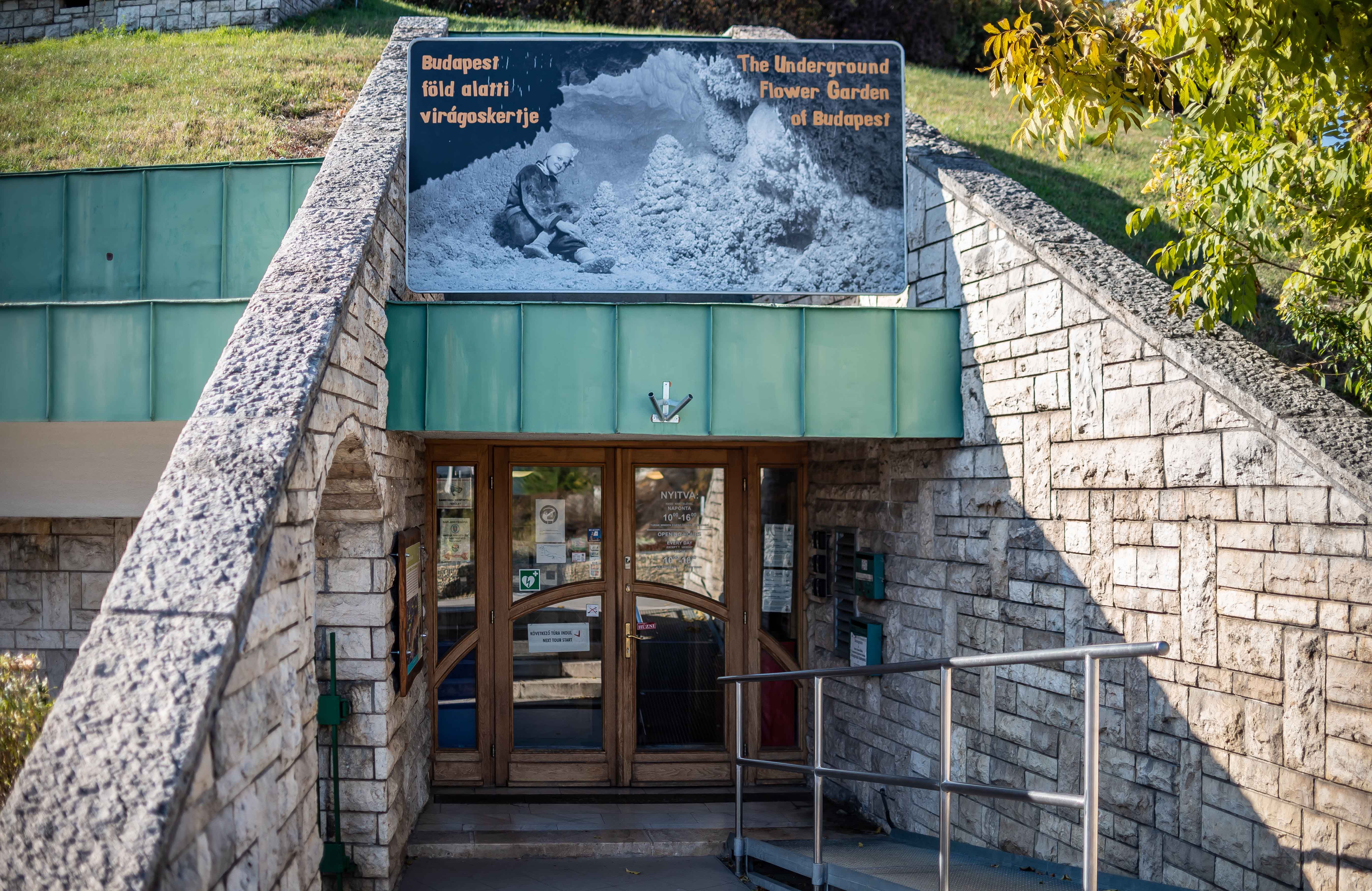 The entrance to the cave system, which was established in 1986 (Photo: Balázs Both/pestbuda.hu)

The Szemlő-hegyi Cave was discovered in 1930 during quarrying on the plot of pharmacist Géza Miklóssy. According to the legislation at the time, the cave was the private property of the landowner, so its research also required his permission. (Today, caves, whether found on private land or not, are state-owned and protected in all cases.) Nevertheless, the cave was very actively explored in the 1930s, and several dissertations were published. Even then, the September 1931 issue of Turisták Lapja wrote about the well-known Pálvölgyi and the new cave discovered at that time:

“And last year, a kilometre away from this cave, on the side of Szemlő Hill, another large-scale cave was found, which is unique due to its peculiar developed stalactite formations. If the capital were to take over the caves of Szemlőhegy and Pálvölgy and organise them properly, it would create a spectacular cave park that no other city can show!” 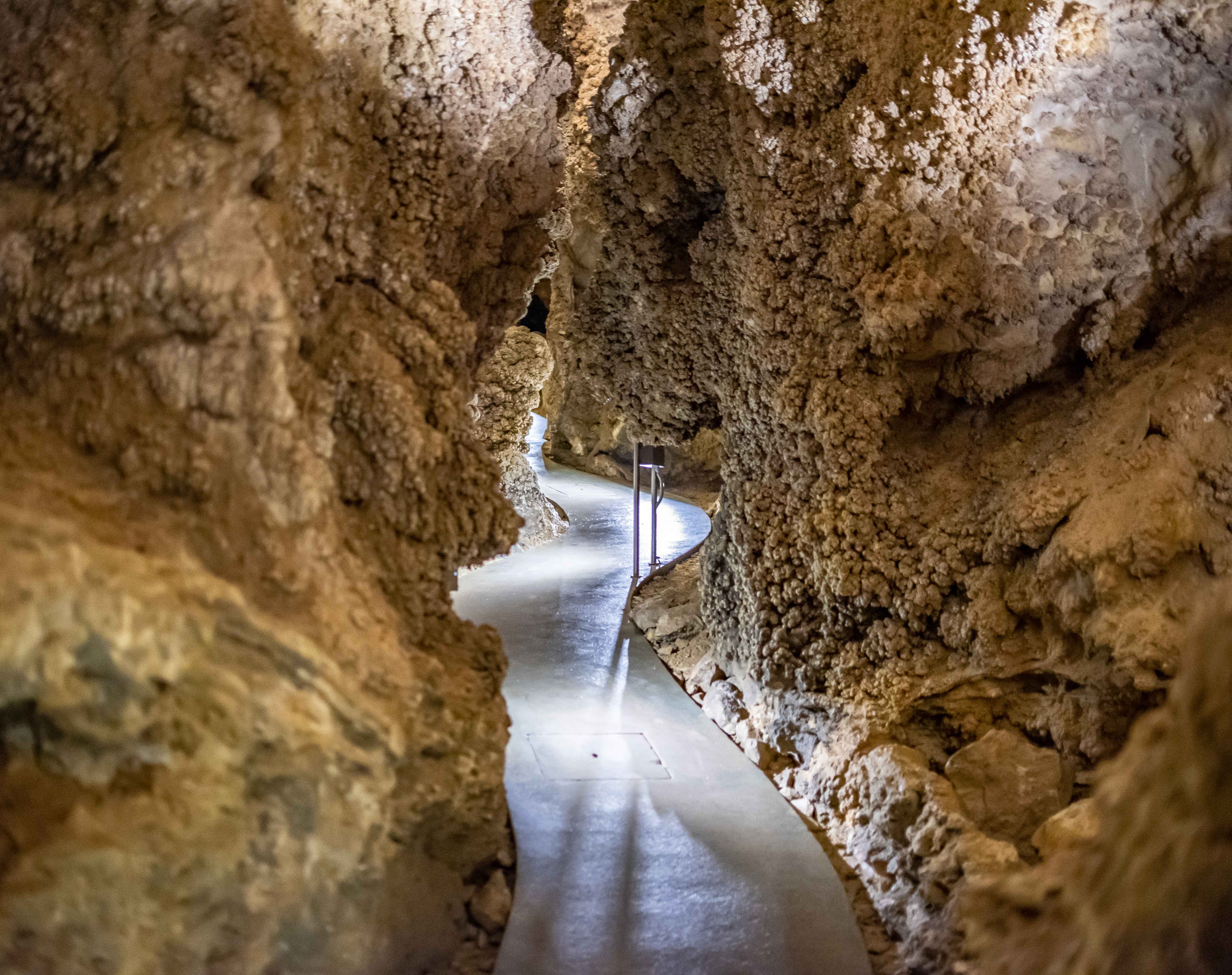 The wonderful interior of the cave (Photo: Balázs Both/pestbuda.hu)

Tibor Matolay wrote the following lines about the unique formations of the cave in the 3rd issue of the journal Földgömb in 1934:

“The specialist looks around in surprise at this relatively small cave, barely 700 metres long, but soon finds that it is almost unparalleled in its kind around the world and provides extremely valuable study material for caving science. The layman is fascinated by stalactites not seen anywhere else, the endless richness of stone flowers reminiscent of cauliflower, roses, berries, and the lavish splendour of the barked walls­.” 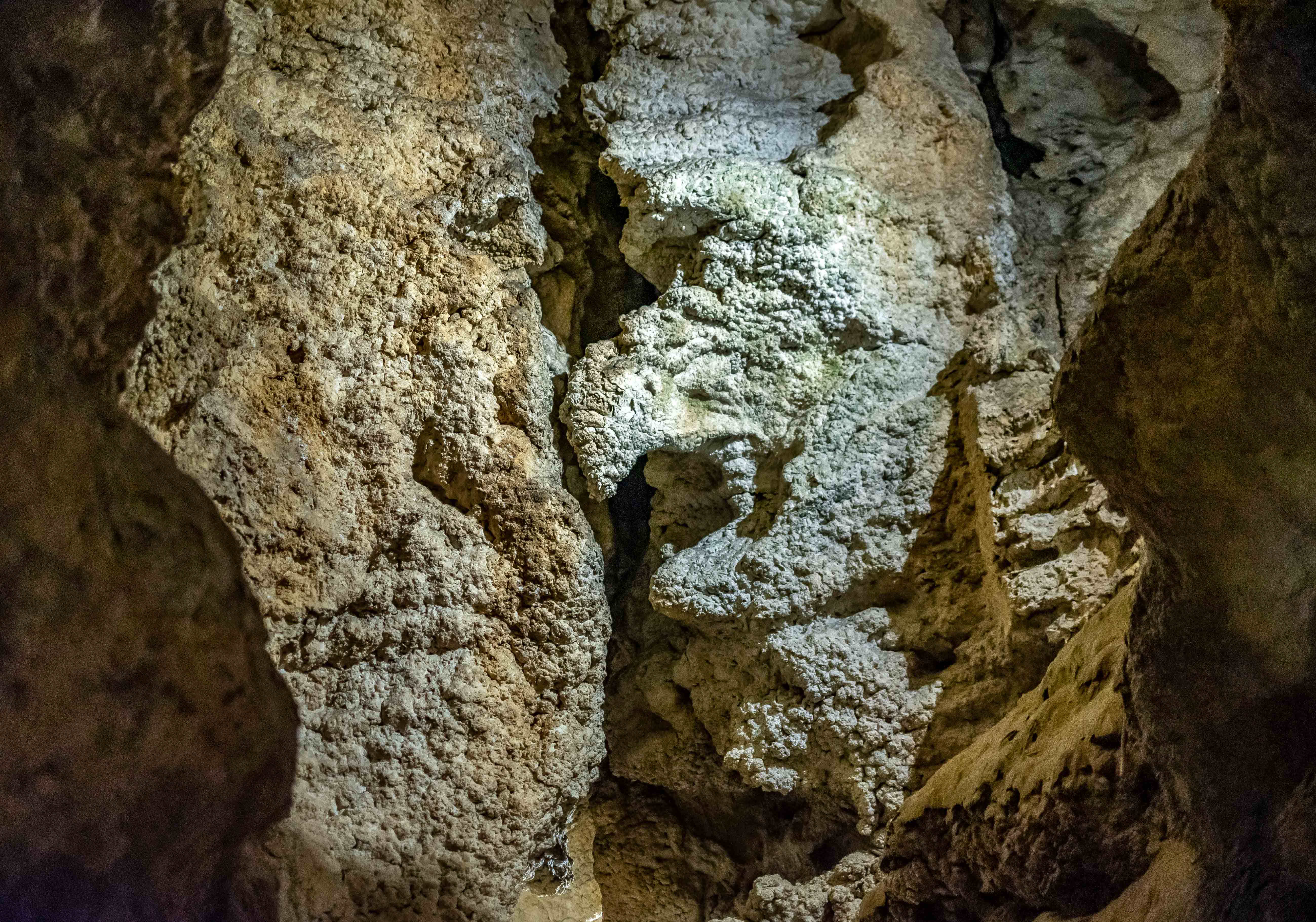 The research was practically continuous for the next half-century, and in 1976 it was classified as a cave of national importance. However, the cave was not open to the public. Construction of the visitable part of the Szemlő-hegyi Cave began in 1974 and lasted for more than ten years. According to contemporary newspaper articles, it cost a total of 100 million HUF. This includes a half-finished 4-metre-wide elevator shaft that was ultimately not finished. 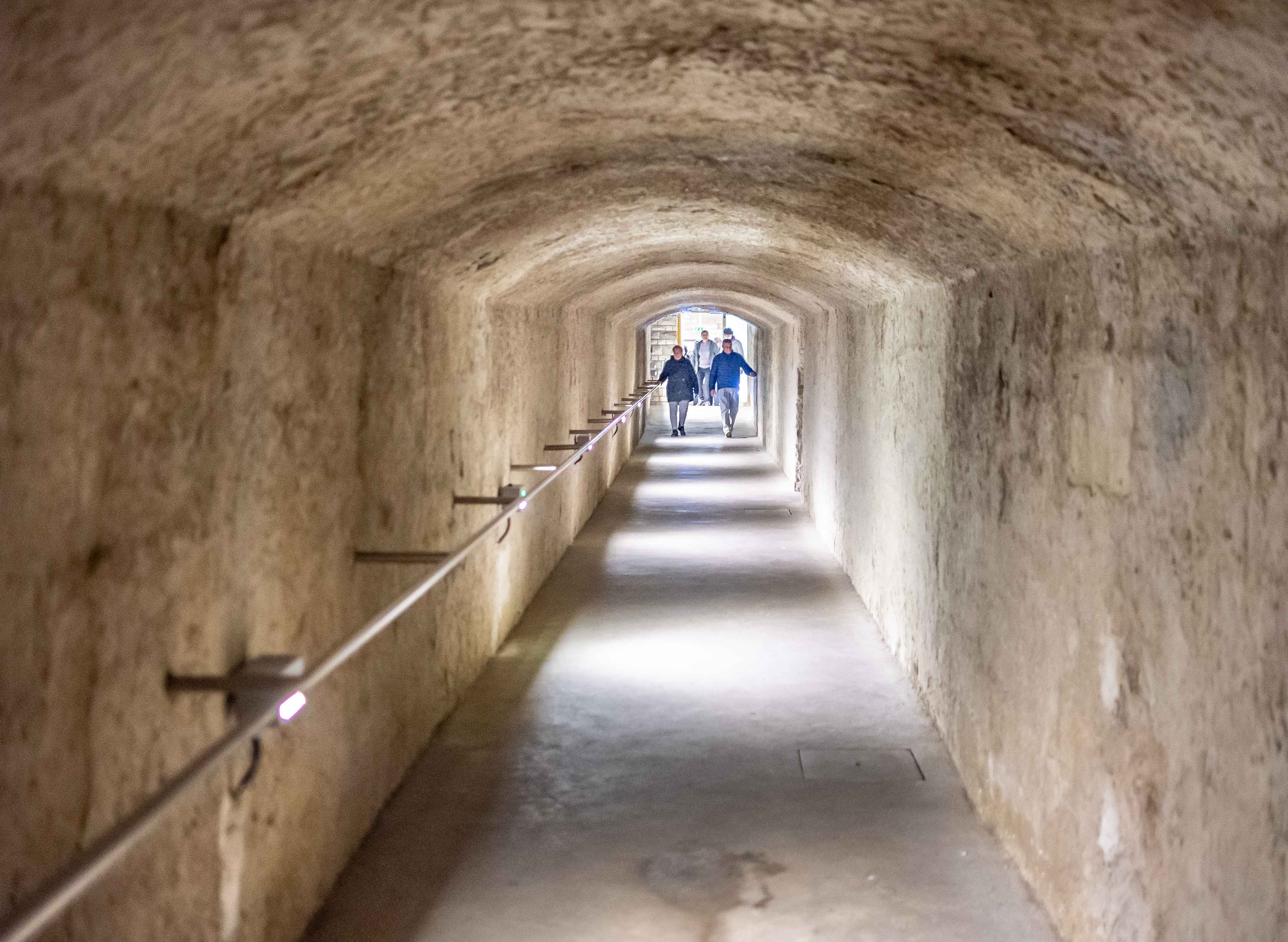 The opening took place on 30 October 1986. Before the opening, a press conference was held, where Hubert Keszler, who was there 56 years earlier when the cave was discovered, was also present. 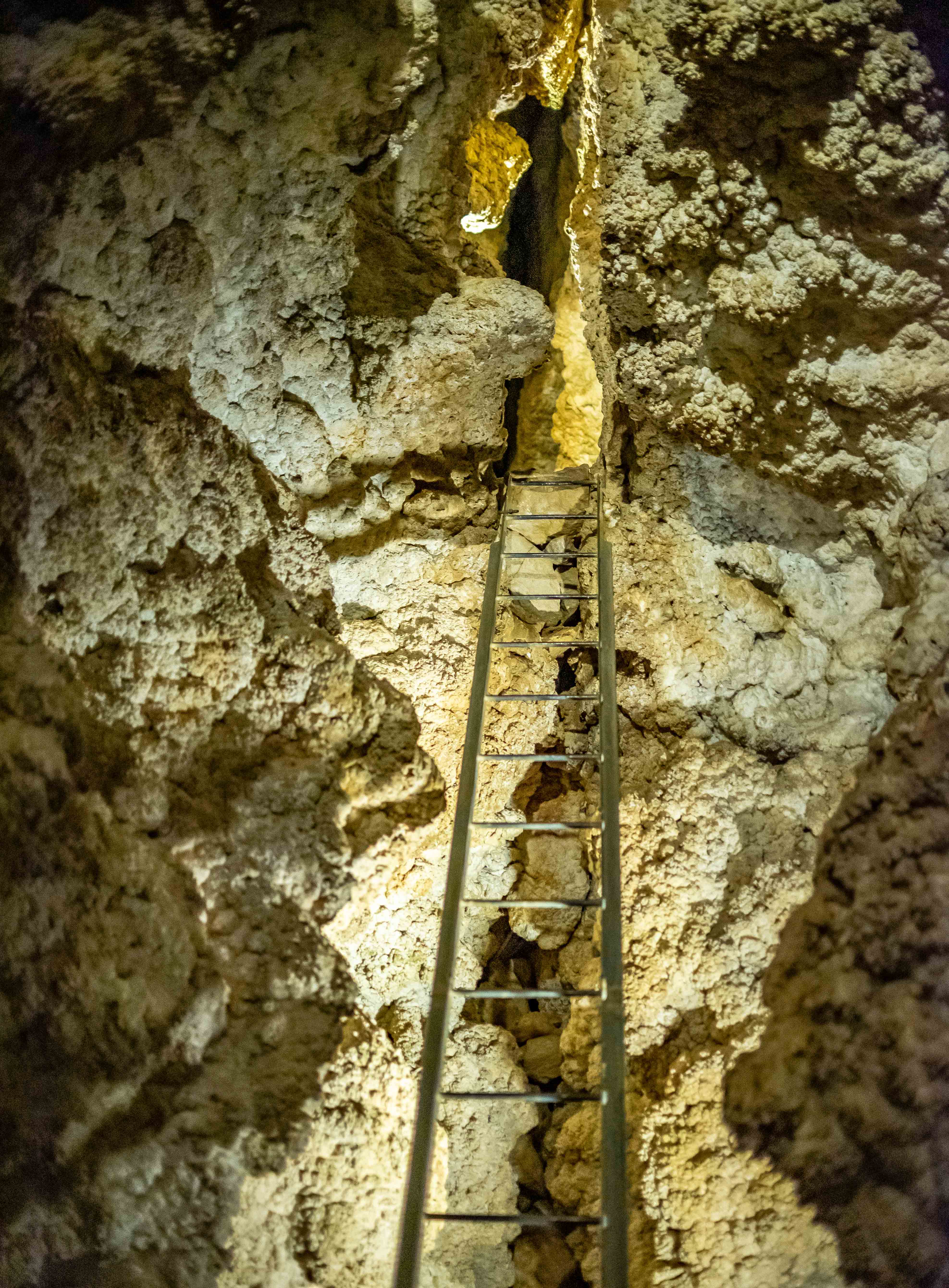 10 per cent of the total length can be walked on (Photo: Balázs Both/pestbuda.hu)

The total length of the cave is 2,230 metres, of which a 250-metre section was made walkable and a new reception building was built for the cave. After the opening, there was huge interest, there was a day that two thousand people visited it, and by the fall of 1987, 57,000 visitors had registered. The cave has been studied in terms of its medicinal effect. Based on the results, it turned out that the Szemlő-hegyi Cave is especially useful in the treatment of respiratory diseases. 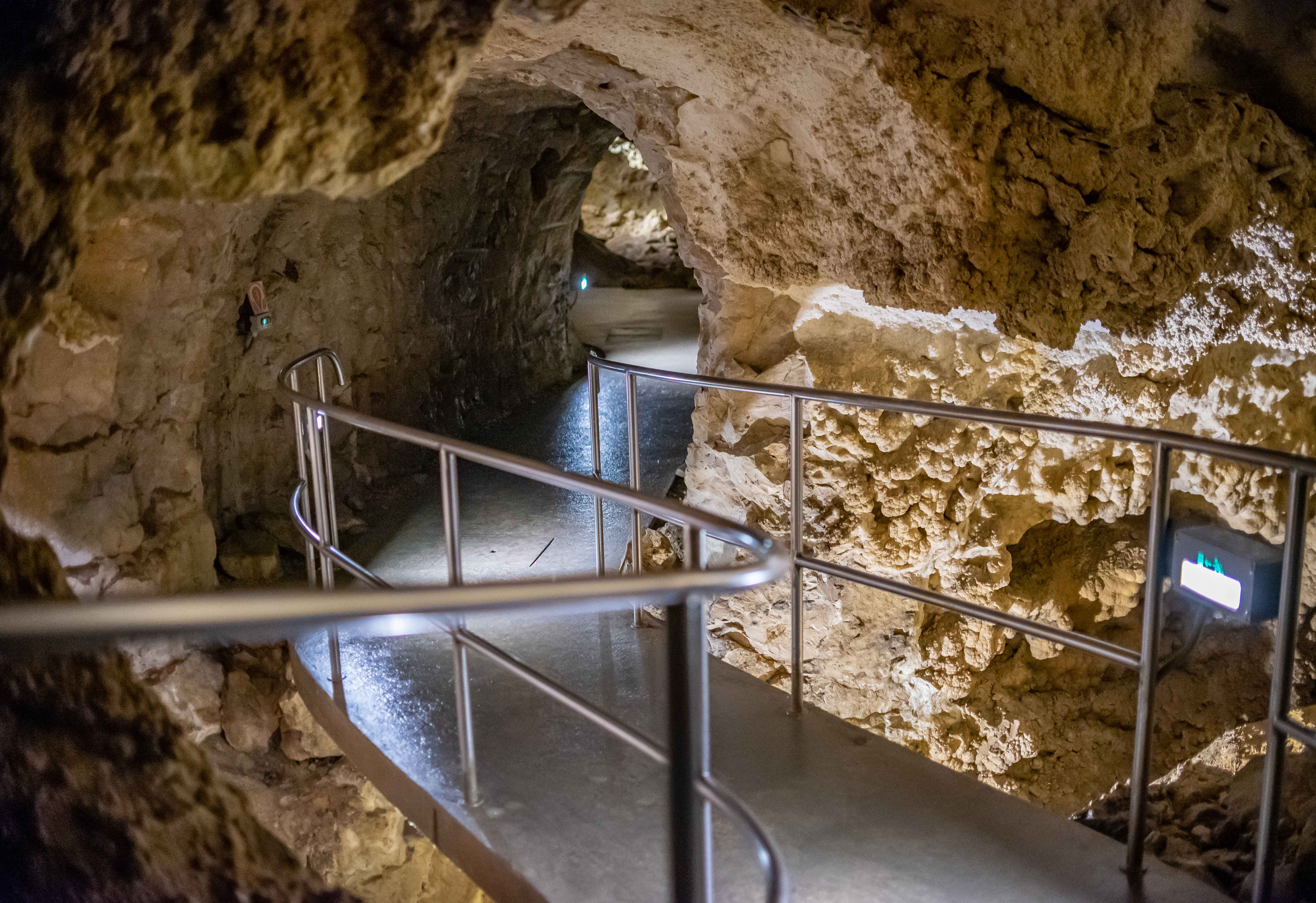 The temperature is 12 degrees in winter and summer (Photo: Balázs Both/pestbuda.hu)

The air in the cave is incredibly clean, it rivals the air purity of the high mountain resorts, besides it is almost dust-free and the humidity is close to 100 per cent. The temperature in the cave is evenly 12 degrees throughout the year. 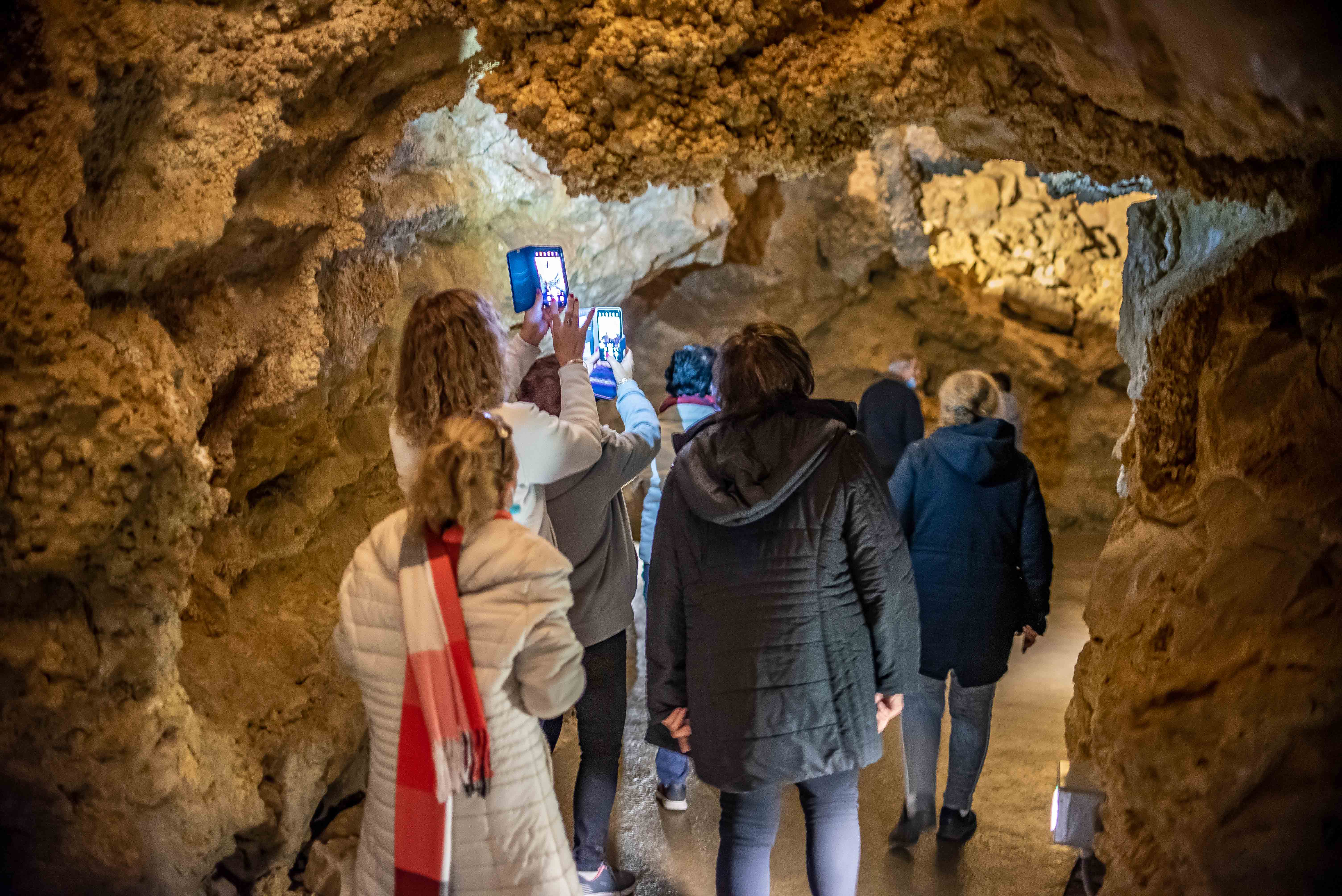 Air quality of the cave rivals that of mountain holiday resorts (Fotó: Both Balázs/pestbuda.hu)

Research has also covered whether visitors pollute the air in the cave, but it turned out that although the concentration of bacteria, dust and other substances increases after the visitors, the original value is restored within half an hour. 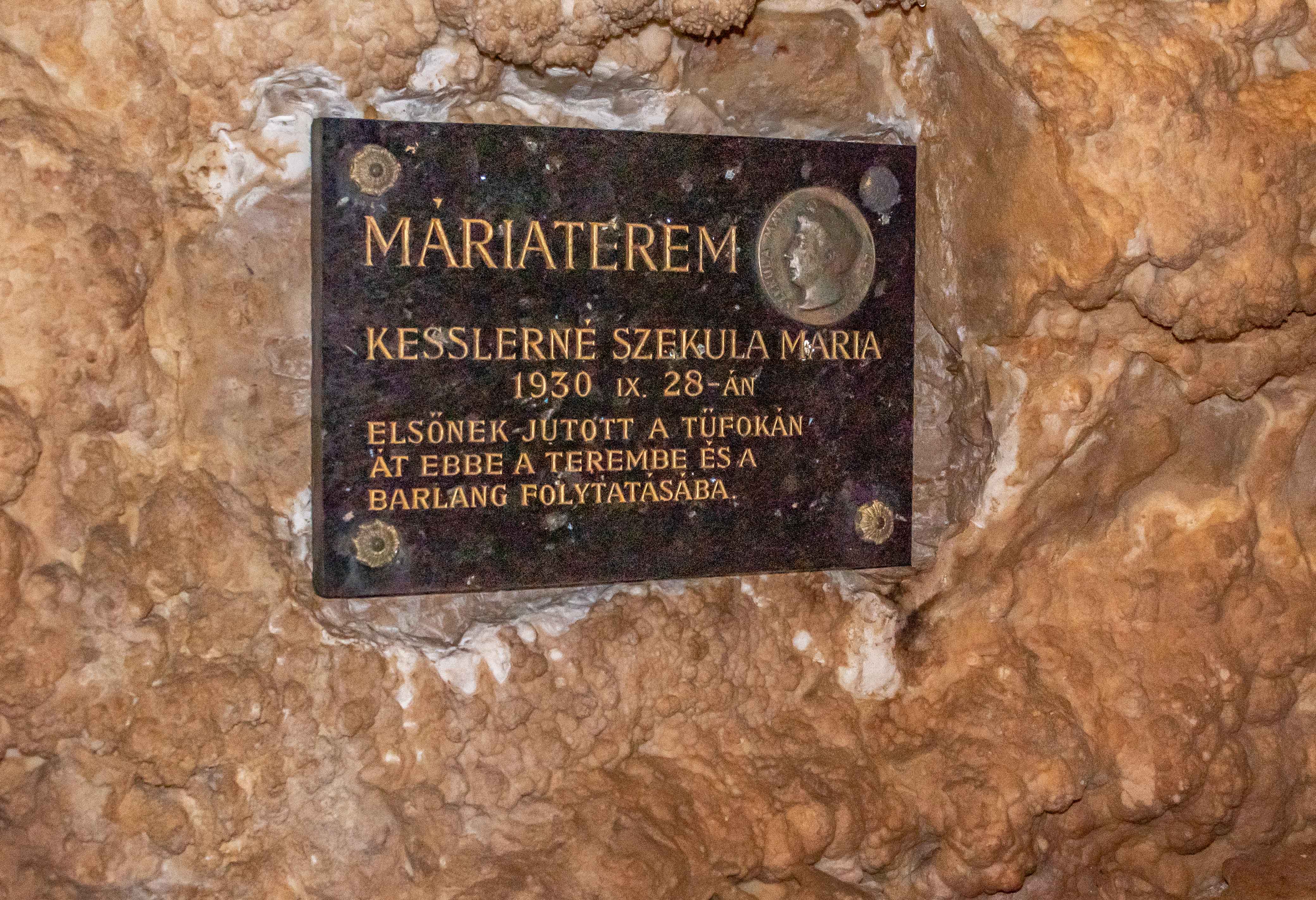 The excavation of the cave began in 1930 (Photo: Balázs Both/pestbuda.hu)

7 years after its opening, in 1993, a memorial garden of cave researchers was inaugurated above the Szemlő-hegyi Cave, where a memorial was erected to those who lost their lives during the excavation of the caves. 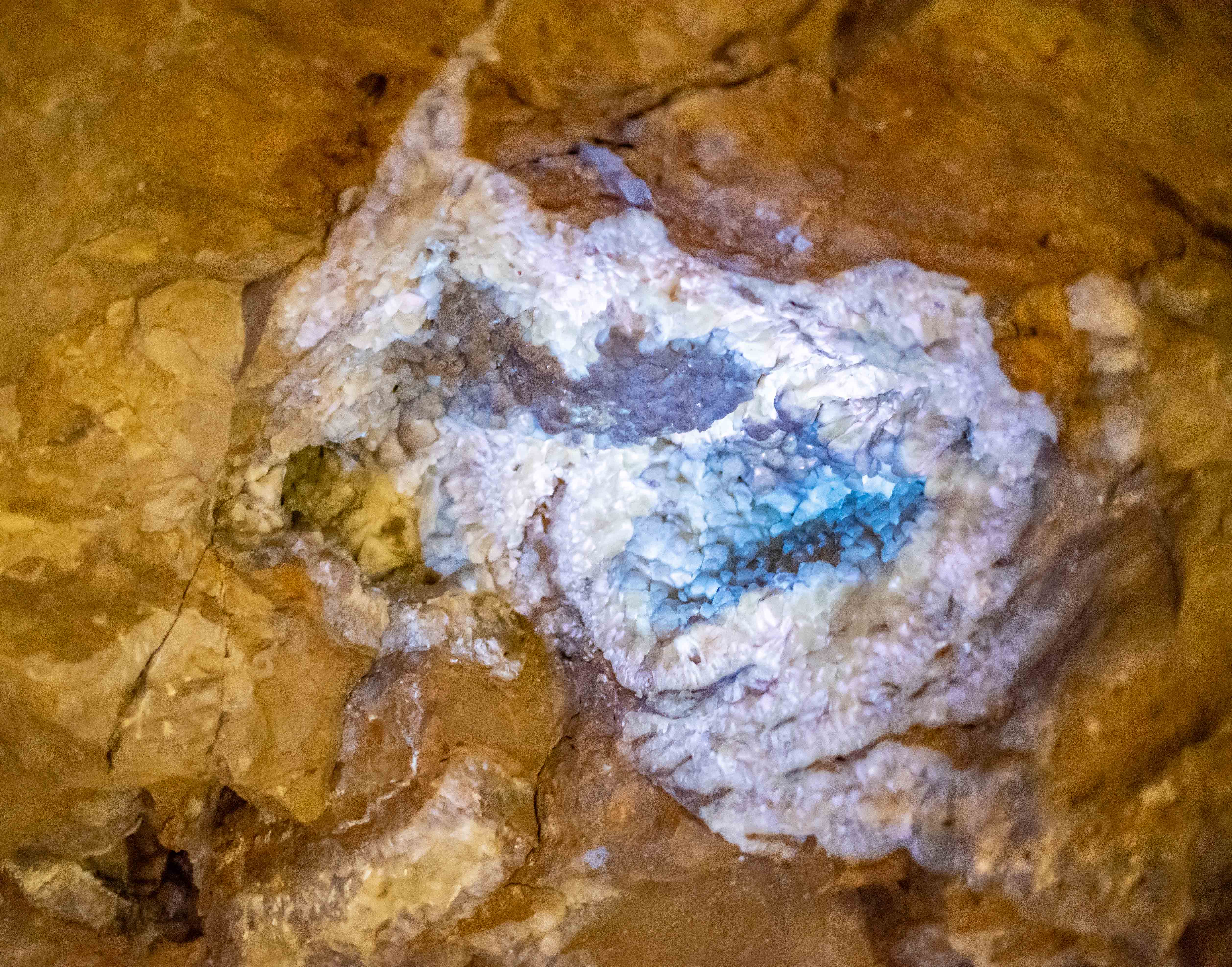 Today, the Szemló-hegyi Cave belongs to the Danube-Ipoly National Park and can be visited every day of the week - except Tuesday - as part of a guided tour.

Cover photo: The Szemlő-hegyi Cave can be visited for 35 years (Photo: Balázs Both/pestbuda.hu)