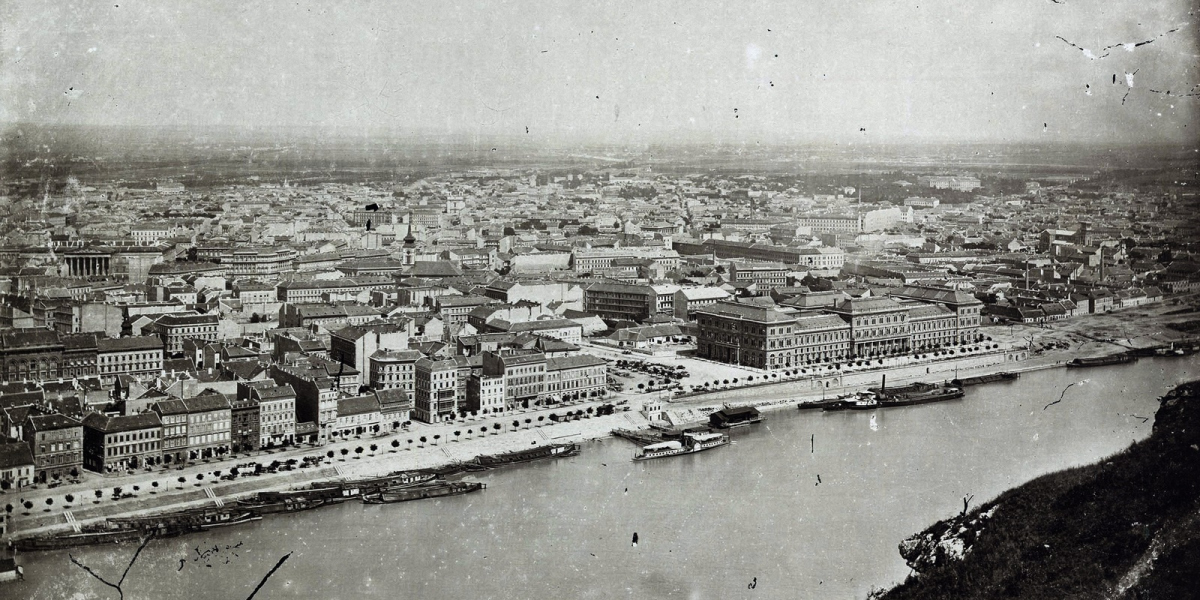 Pest and Buda were not united in 1870. A lot had to be done for the two cities, which developed separately, to be a unified Budapest. The first was to draw up a comprehensive regulatory plan.

The Public Works Council, formed in 1870, issued a tender for this as early as March 1871, with a deadline of 1 November 1871. The aim of the tender could be read by the general public in the official publication of the Budapesti Közlöny published on 4 April 1871:

“The goal of the tender, as already detalied in the primary announcement of 15 Dec. is to win a general appointment and regulation plan, the adoption of which would make Buda-Pest, on the one hand as the capital of the country, the seat of the prince and government, the culmination of the spiritual and intellectual forces, worthy of its status, on the other hand as the hub of industry, trade and turnover, by making the benefits and facilitations of these key factors of progress, a metropolis. ”

In the tender, the applicants had to propose the following: to designate the main traffic routes and squares, to roughly determine the future extent of Budapest, to designate the location of public buildings, including grammar schools, real schools, the technical university, the astronomical tower, libraries and the central medical institute. It was also necessary to propose the location of an industrial museum, town halls, a riding school, an orphanage, a shooting range and a market hall. 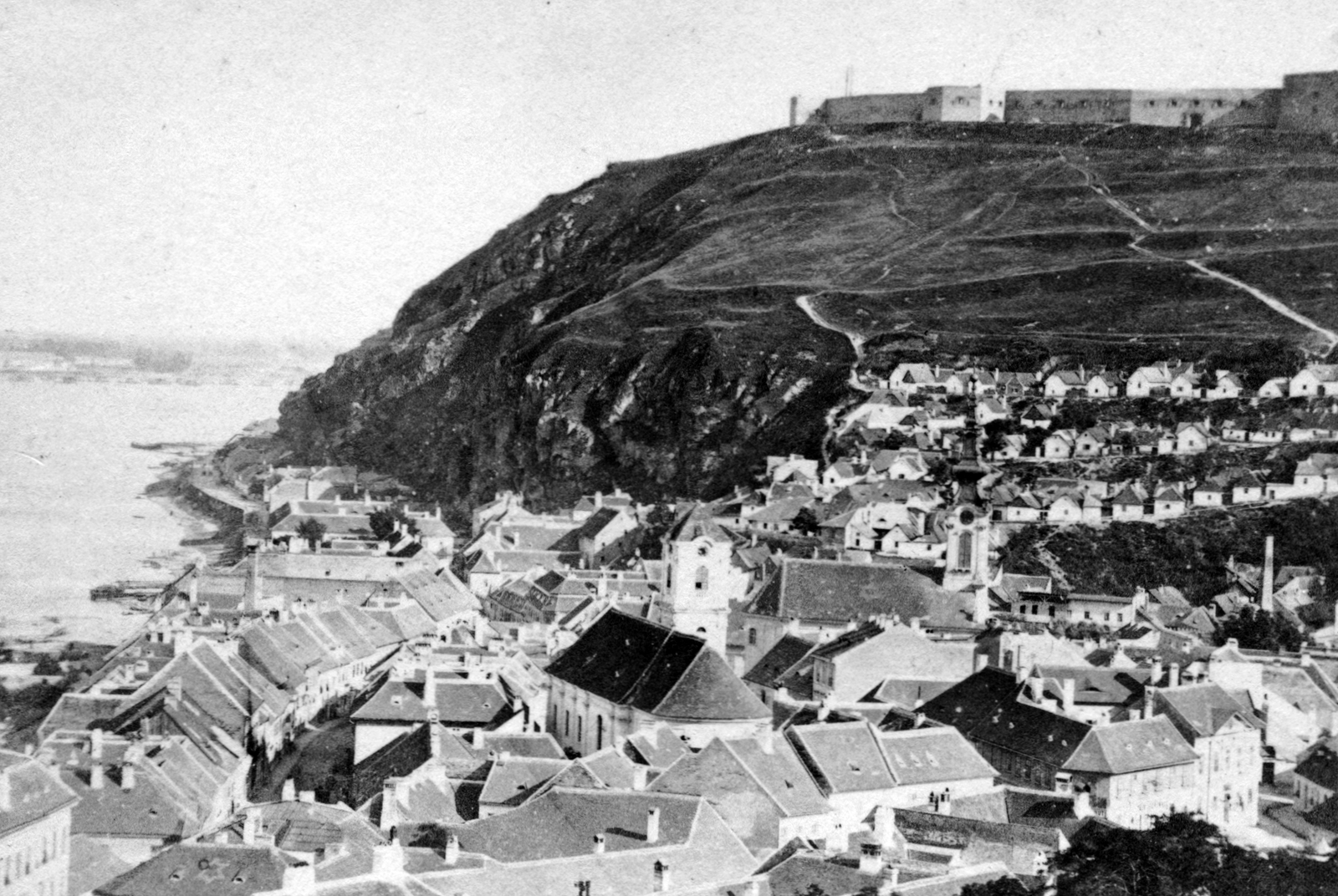 The applicants would have uniformly eliminated Tabán, which was already a slum in 1872 (Photo: Fortepan / No.: 13256)

The tender had to find a solution for sewerage (Pest and Buda were hardly sewered, the experts even discussed the ways of sewerage), drainage, lighting and parks, including afforestation of the city. The first prize of the tender was 20 thousand, the second 10 thousand, the third 5 thousand gold francs. (A gold franc really meant what its name meant, gold, a gold franc contained 0.3 grams of gold.)

The deadline for submitting the application was 1 November 1871, for which many submitted applications. The first prize was won by Lajos Lechner with his project "Veritas" , the second by Frigyes Feszl, with the codename "Metropolis" , and the third by an engineer duo from London with their project "Ich dien". 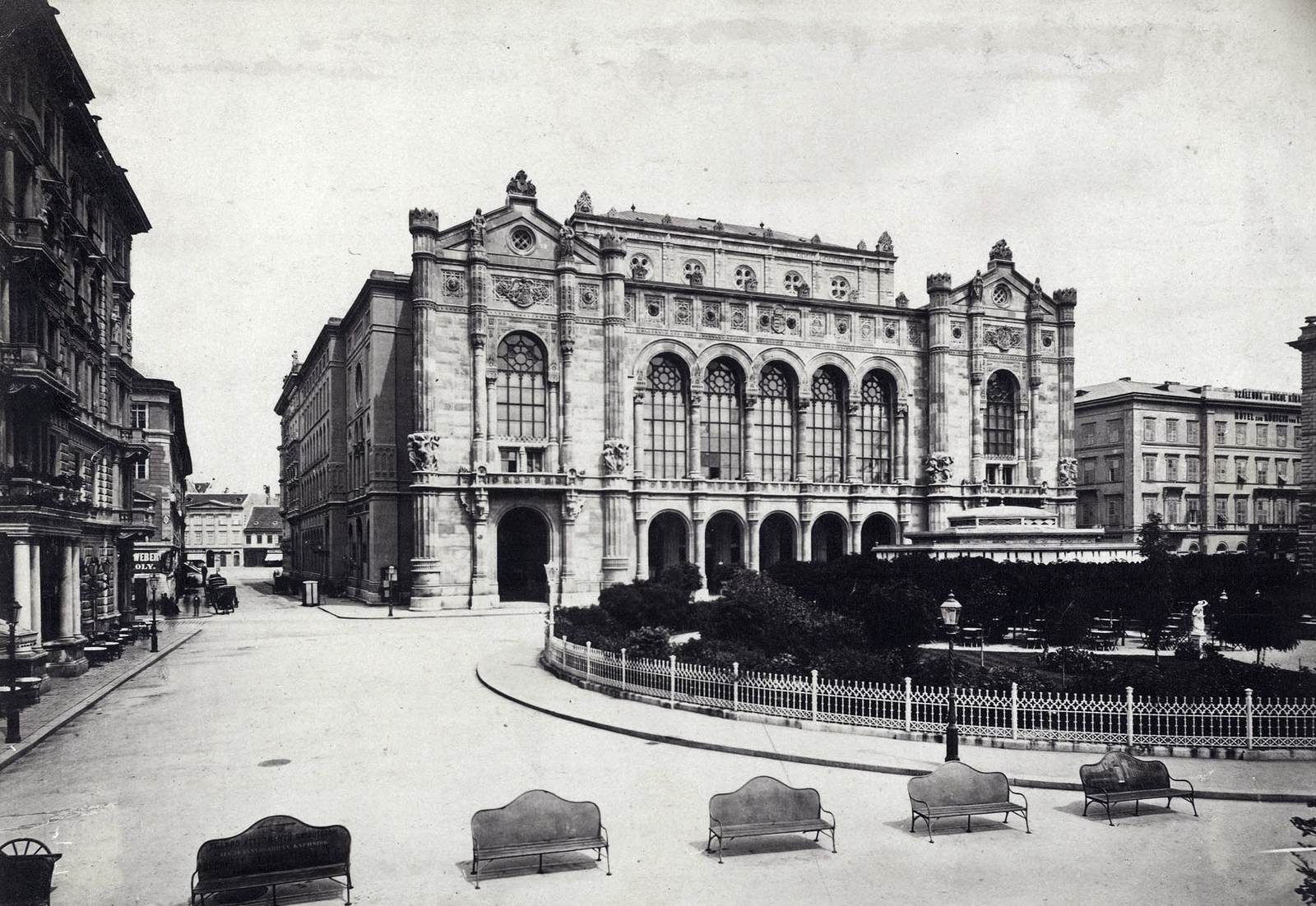 Lechner and Feszl intended a different function for the Danube bank, Lechner would not have built a promenade. The picture shows the Vigadó building, designed by Frigyes Feszl (Photo: Fortepan / György Klösz / Budapest Archives. Reference No.: HU.BFL.XV.19.d.1.05.107)

Unfortunately, none of the plan documentation remained in its entirety, the fate of which was described by László Siklóssy, the conscientious historian of the Public Works Council in his work entitled Hogy épült Budapest? [How Budapest was built?]:

“Unfortunately, the archive of this tender is only available to us truncated. When, in February 1919, a so-called people's law abolished the Public Works Council and occupied its headquarters, all its documents (…) were transferred to the central town hall in a great hurry and mess, but they soon fell into communist hands. ”

However, the essence of Lechner's and Feszl's works is known, Lechner's primarily focused on Buda's plans. He proposed to expand the royal palace with new wings, to widen the roads leading to the Castle, to demolish the  Fehérvári and Ferenc József gates, but he would have left the castle walls. He would have rearranged Tabán, dreamed of luxury apartments in place of the huts, and proposed constructions on the south side of Gellert Hill. The plan dealt with the development of Lipótváros in Pest a lot, it would have demolished the Újépület - this was made a precondition by the tender - and it would have lengthened the streets leading here. 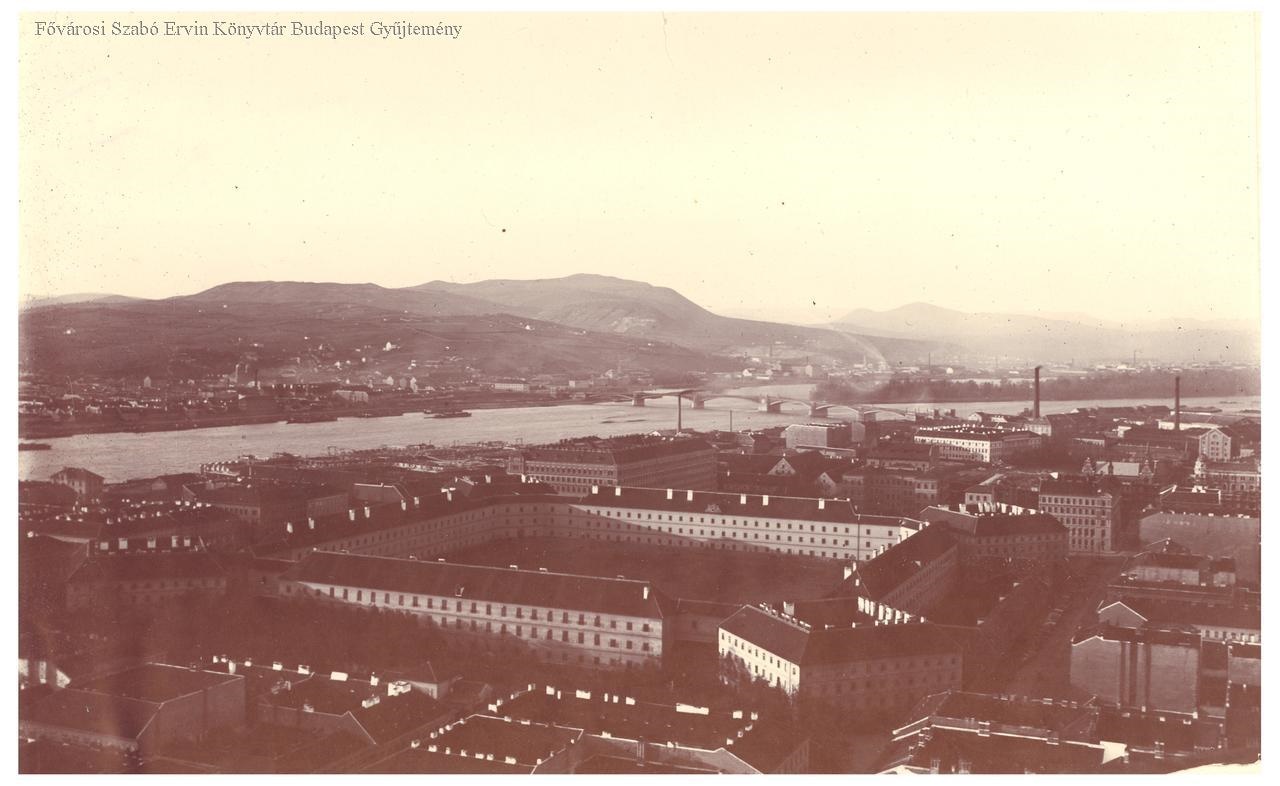 The tender also included the demolition of the Újépület on the site of today's Szabadság Square and the surrounding houses, as well as the incorporation of its location. The Újépület was finally demolished in 1897 (Photo: FSZEK Budapest Collection)

Lajos Lechner would not have built parks and promenades on the banks of the Danube, but inside the city, and would have created a forest strip around Pest. He took over the boulevard system, but mostly in Buda, as he considered the roads that were too wide to be harmful.

Frigyes Feszl proposed more and larger-scale avenues and boulevards, the relocation of the central railway station and the reconstruction of the old town of Pest, as well as the construction of Lágymányos and the complete reconstruction of Tabán. Feszl also planned to reorganize the Castle, but he did not want to demolish the gates, he proposed to build promenades on the bastions. It would have made today's Széchenyi Square a kind of Trafalgar Square in Budapest, and it would have built the Parliament on the banks of the Danube.

In his work already quoted, Siklósi compares the two applications as follows: "Lechner wants to finish now, Feszl wants to work for and with the next generation." According to him, Feszl's plan was clearly more forward-looking, but the arbitration committee was cautious and cast its vote in favor of the plan that wished less.

None of them have been implemented in whole, but the regulatory plan subsequently adopted took much of the large-scale ideas of these two applicants. The Public Works Council adopted a unified regulatory plan for 1873 using the elements of the two materials, and the Andrássy Avenue and the Outer Ring Road, and the sewerage of Pest was completed under the leadership of Lechner. 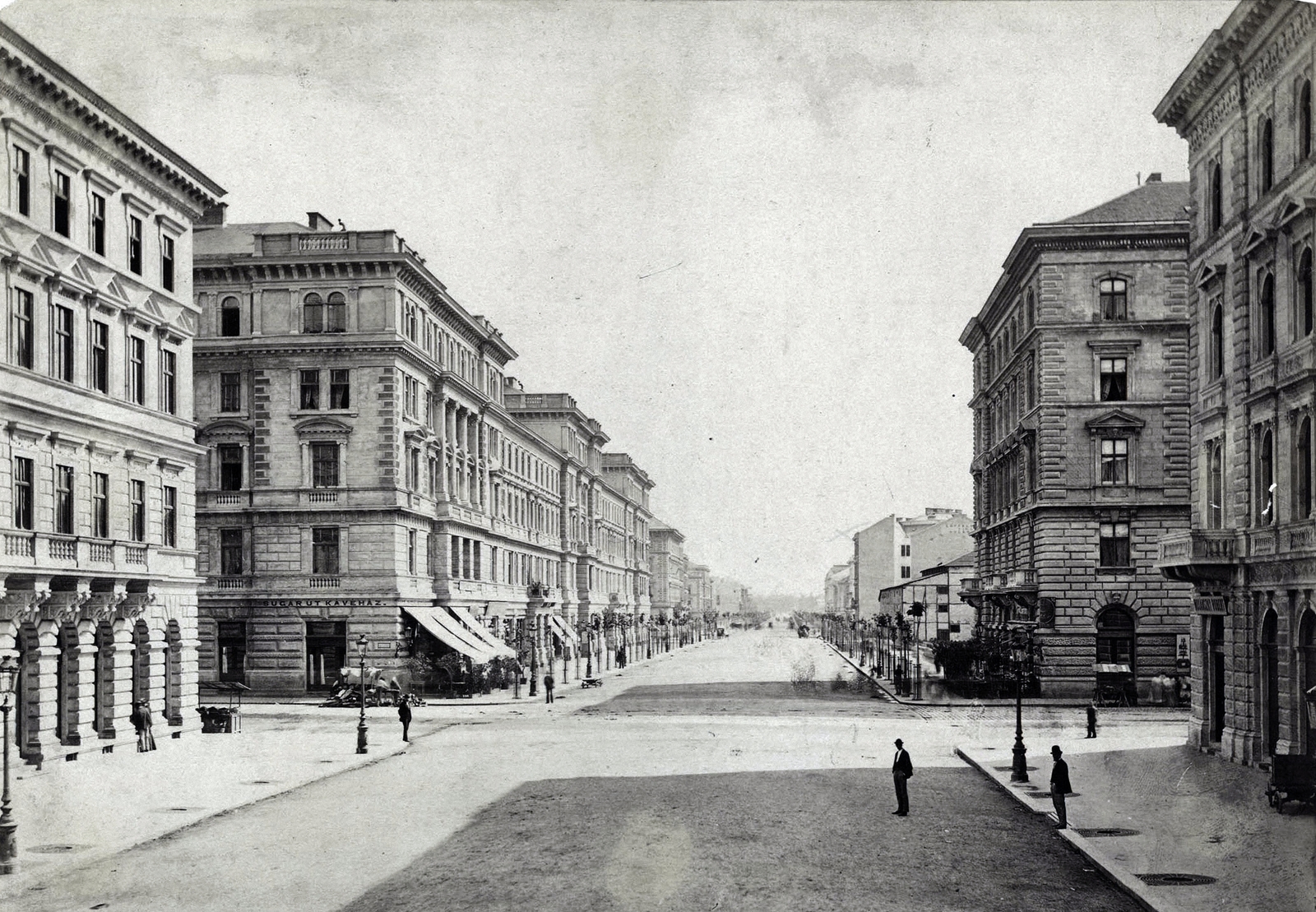 An essential element of the adopted regulatory plan was the Sugárút [Avenue], which was started to be built under the leadership of Lajos Lechner. The picture shows the condition of the Avenue in 1878 (Photo: Fortepan / György Klösz / Budapest Archives. Reference No.: HU.BFL.XV.19.d.1.05.107)

Although a "more modest" idea of urban development grew out of the combination of the two large-scale plans, between 1871 and 1914, using some elements of these plans, a miracle was born from the connection of Pest and Buda and Óbuda, which we call Budapest today.