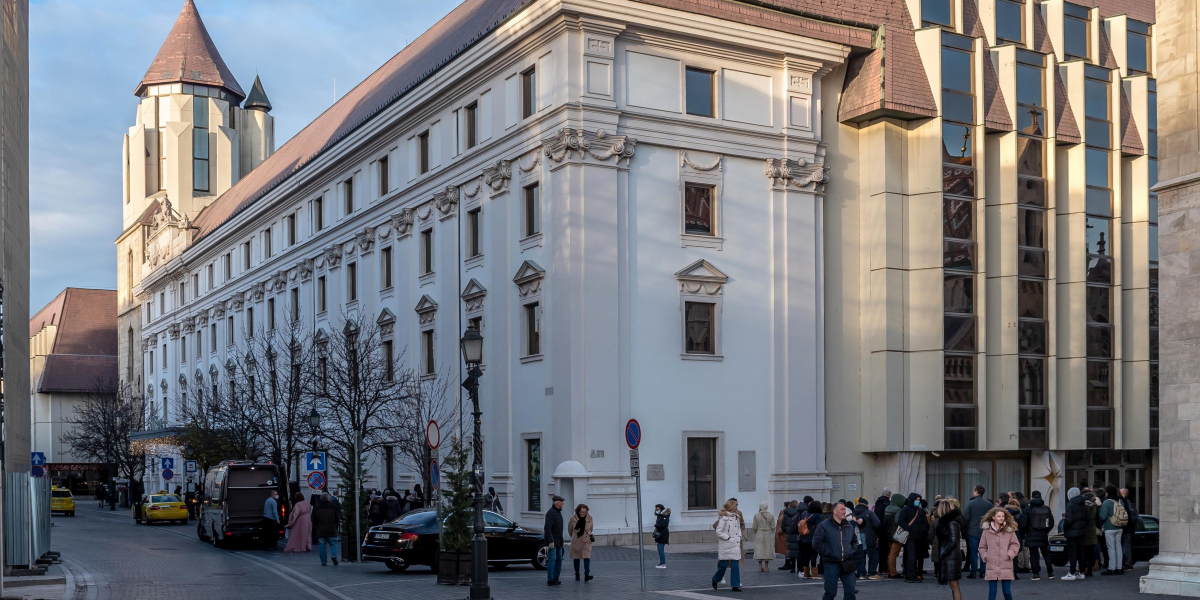 The Hilton Hotel, handed over 45 years ago, was built on the site of the city’s most beautiful Baroque monument, a Jesuit dormitory damaged in World War II. Only the western wall of the old building facing András Hess Square remains. Some say that the modern building has been incorporated into the castle environment, others believe that it disturbs the harmonious view of the Matthias Church and the Fisherman's Bastion with its huge block.

After the devastation of World War II, the restoration of the Castle took place in a rather ambiguous manner. Buildings that could be saved but were ideologically inadequate were demolished or mutilated, the royal palace completely turned upside down, and modern buildings erected on empty plots. 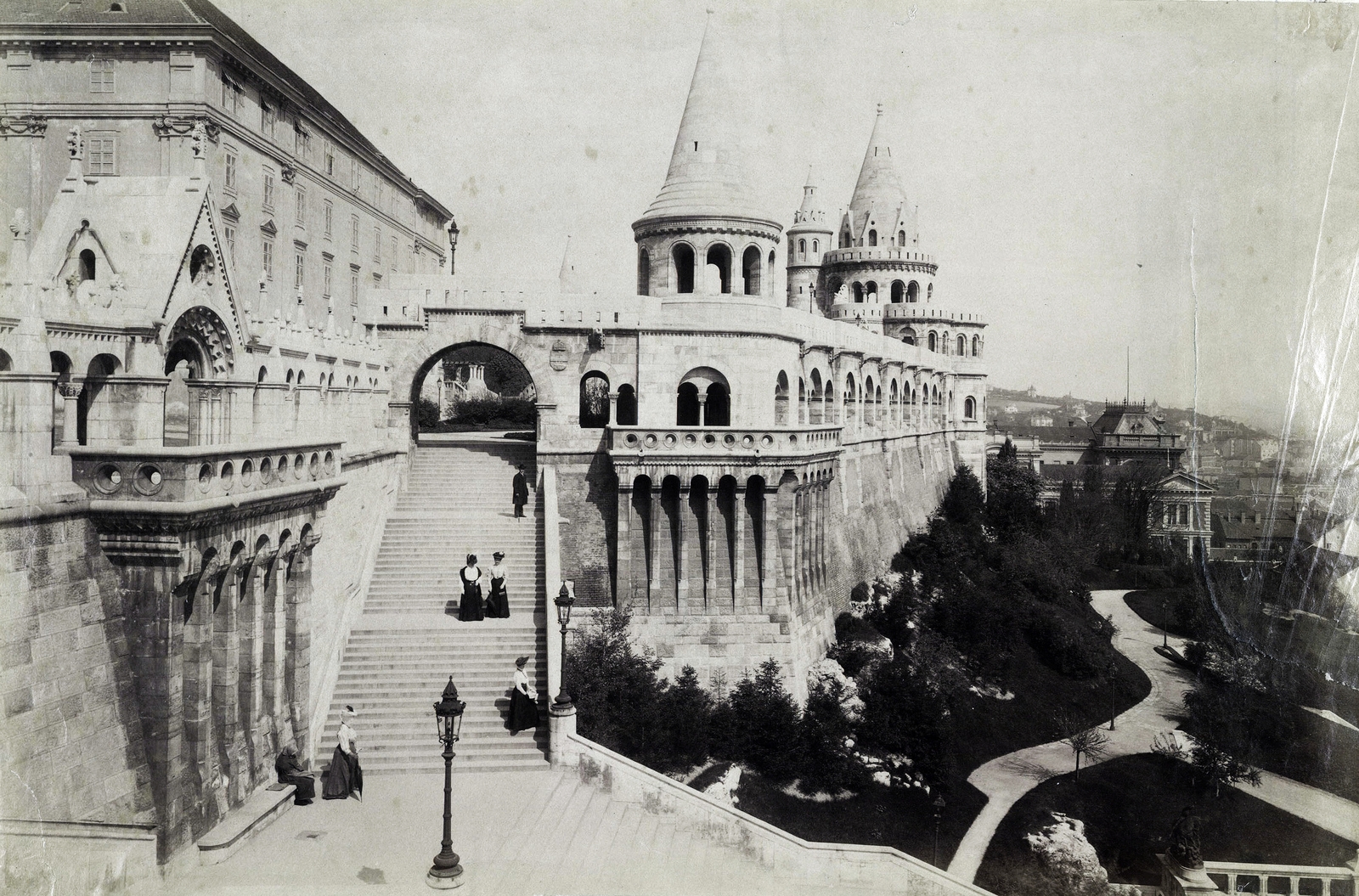 The building of the Jesuit dormitory at the end of the 19th century (Photo: Fortepan, Budapest Archives. Reference No.: HU.BFL.XV.19.d.1.08.125)

One such modern building is the Hilton Hotel, which was handed over on 31 December 1976, and includes the ruins of a Jesuit dormitory and school, built on the remains of even earlier buildings. Despite the fact that after the war, socialism at the level of buildings tried to “cleanse” the system of alien thoughts, the Hilton, one of the capitalist symbols of the ancient enemy, the USA, was admitted here.

The reason for this was the special economic situation of the country, as in the 1970s socialist economic policy could only be kept alive with Western loans and Western currency. Therefore, the system did its best to become more and more acceptable in the West, which contributed not only to the successful borrowing but also to the boost of tourism. And one of the best sources of hard currency was the Western tourist. 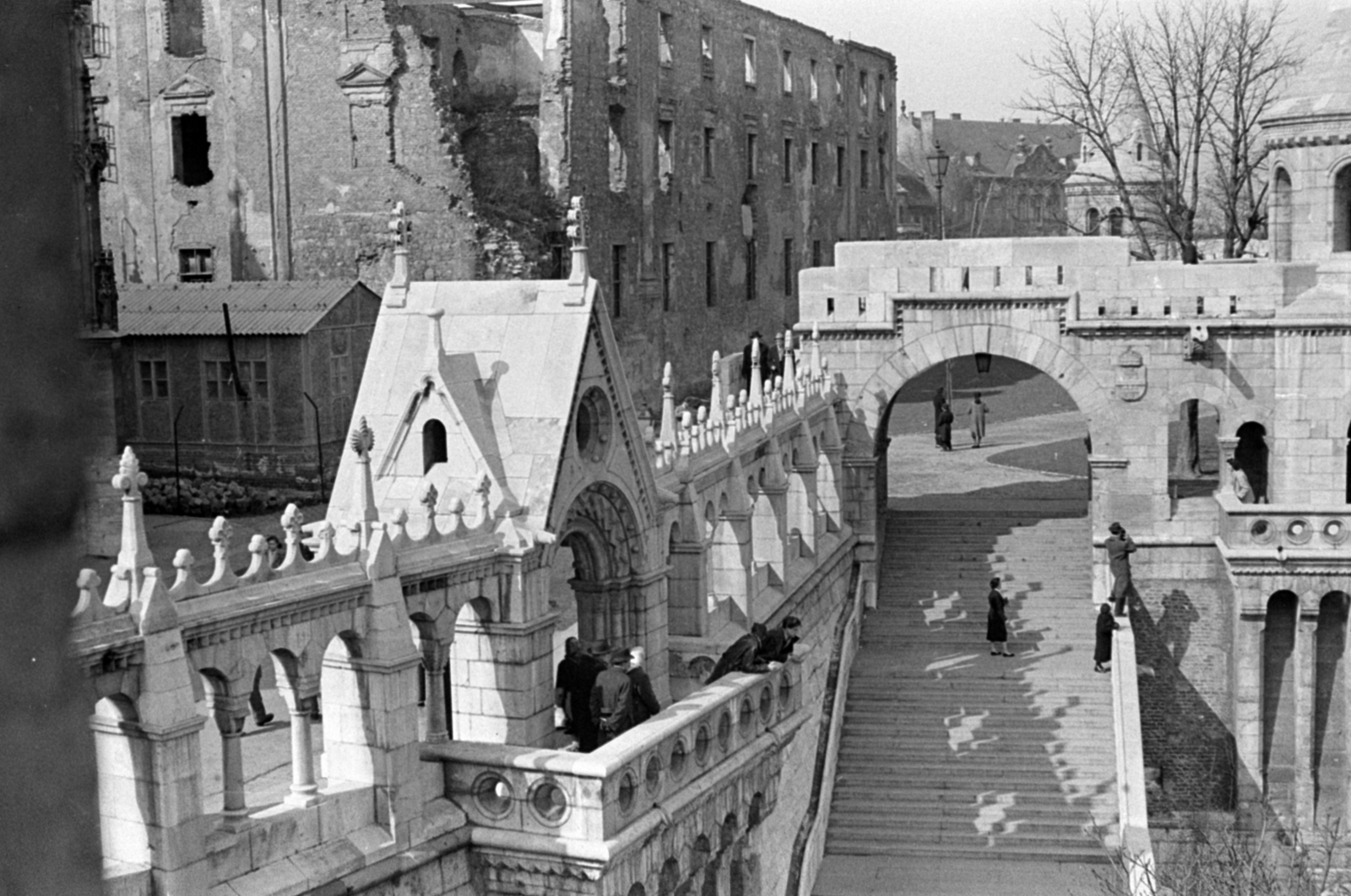 Until the Turkish era, the area housed a monastery and church of the Dominican order, which was replaced by a baroque Jesuit college and school building after the expulsion of the Turks. From the end of the 18th century, the building was used for secular and mostly governmental purposes, as the Hungarian Jesuits were dissolved by Joseph II. After the war, the dilapidated building was fenced off, there was no real idea for decades to utilize the burnt-out, half-collapsed former Jesuit dormitory, although it was suggested that a primary school be built here, but this was discarded and virtually nothing happened here for 25 years.

However, in the late 1960s, the big idea came, a hotel should be built here, as the view is prime and the environment is fabulous. 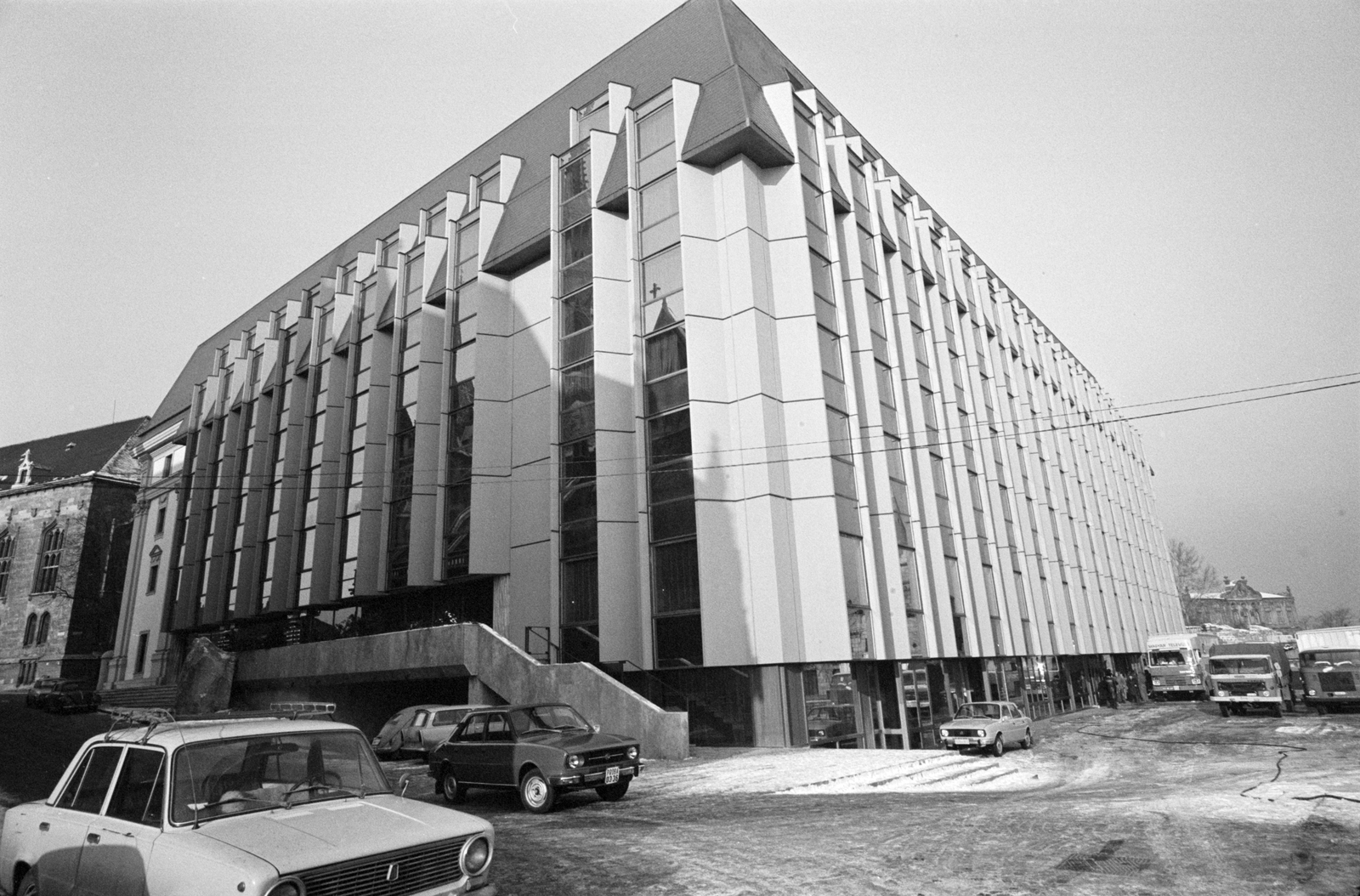 Shortly after handing over the hostel in 1979 (Photo: Fortepan, ETH Zurich)

The American Hilton Corporation was a partner in hotel construction. A kind of franchise solution was used, ie the Hungarian Danubius Hotel and Spa Company built the hotel on the loan of the Hungarian National Bank, based on the plans of Hungarian designers, Hungarian materials, but according to Hilton's regulations. (The hotel is still owned by Danubius Zrt.) The Hungarian company operated the hotel, the American partner provided American guests with a certain commission for the accommodation fee, ie Hilton was based primarily on American tourists visiting here. Americans were only entitled to commission after accommodation, but not after other services, such as bars and restaurants.

The plans were prepared by Béla Pintér and his team at the Középülettervező Vállalat [Public Building Design Company], and the construction was preceded by an archaeological excavation. What they knew was presented in the new building from the buildings that once stood here, so, for example, surrounded by the interior of the hostel, you can still visit the Dominican courtyard today. 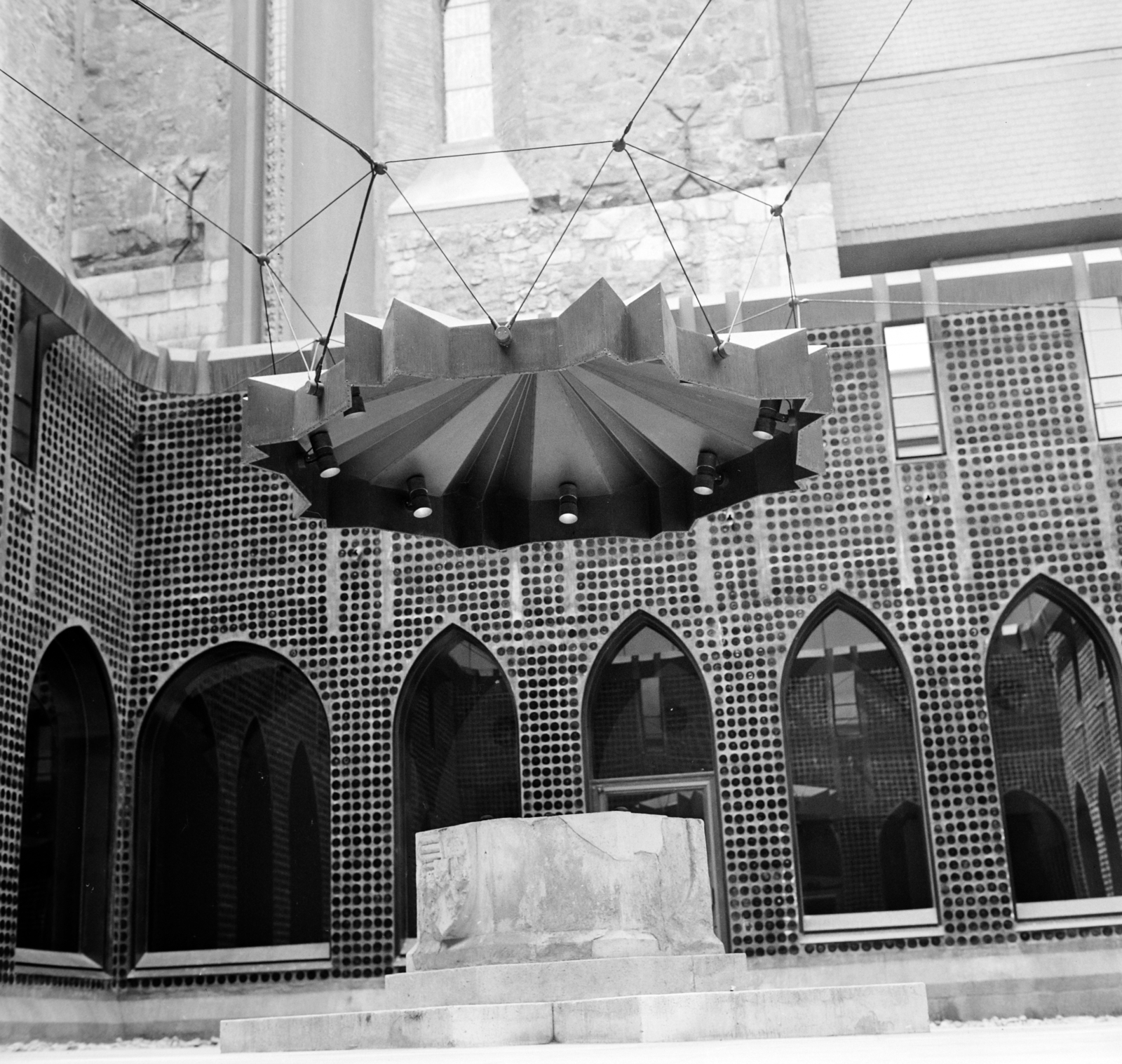 The building includes only the western wall of the former Jesuit dormitory, the rest has been newly built. By 1976, the 323-room hotel, of which 23 were suites, had been made from Hungarian materials and contained many prefabricated panel elements - these were not factory-made, but only prefabricated individual elements designed spefically for here - and it was made from 1 billion 222 million forints. The hotel could accommodate 647 tourists at a time. 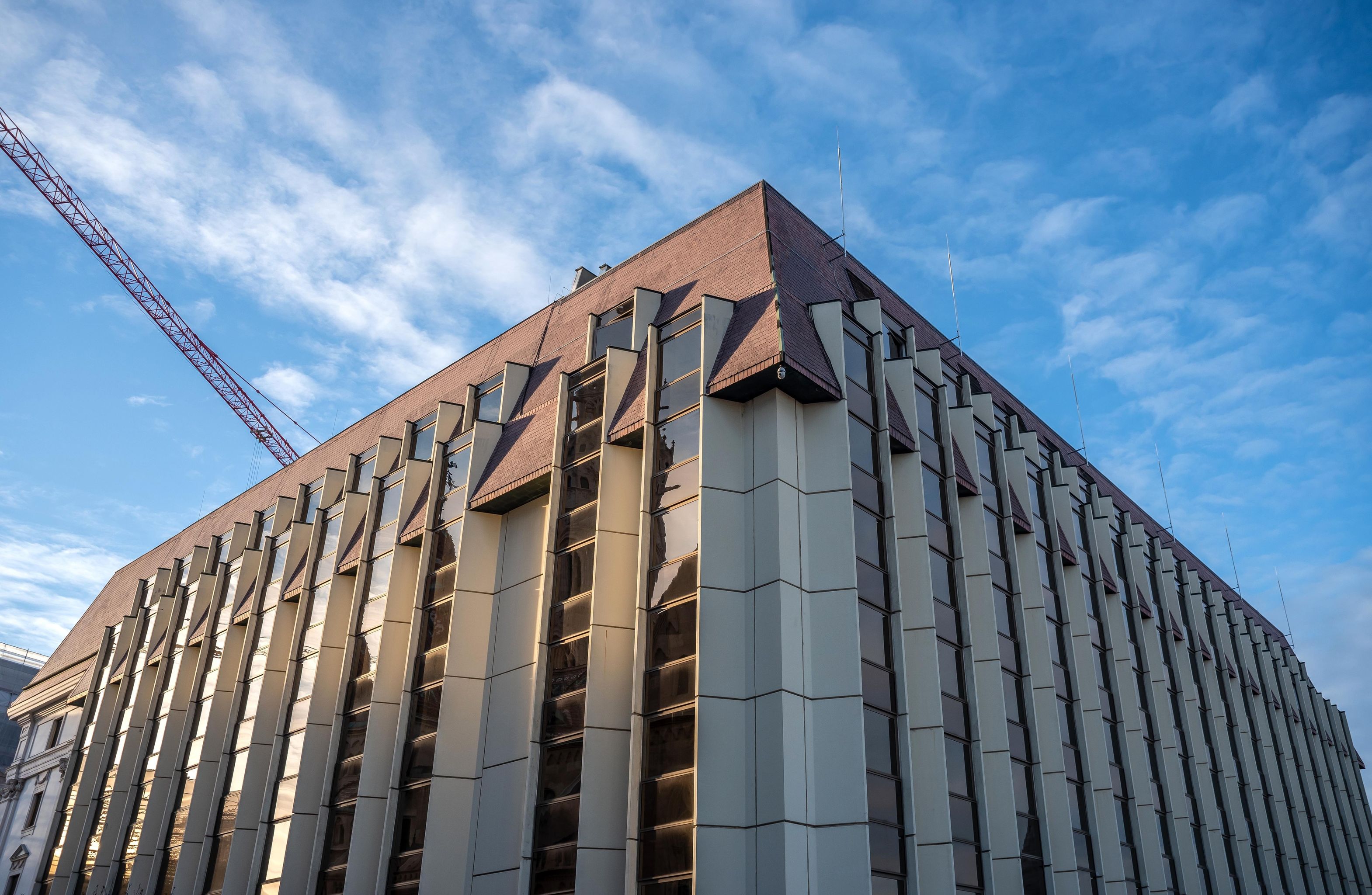 The modern building of the Hilton (Photo: Balázs Both / pestbuda.hu)

At what price could rich tourists spend time here? Although the Hilton was built as a luxury hotel, it was quite cheap compared to the other Hiltons. While in the Castle it was $ 44 for a single room, in the Hilton in Paris one had to pay $ 80.5 for the same, but almost every Hilton in Western Europe was more expensive - if not that much - than in Budapest. For the Hungarian purses, this was quite much, as at that time the cheapest room was 941 forints for a night, which was one third of the average gross monthly earnings at that time. The investment was expected to pay for itself in 10 years, bringing $ 8.6 million a year in hard currency to the Treasury.

The Világgazdaság newspaper described Hilton's services on 30 December 1976, one day before the handover:

“Its restaurants, cafés and bars can serve 750 guests at a time, so not only the residents of the hotel, but also the tourists visiting the Fisherman's Bastion, the Matthias Church and its surroundings are welcome. In addition, the Hilton has seven function rooms for up to 600 people, where events and smaller congresses can be organized. Besides, various pavilions, women's fashion store, florist, laundry, garage, etc. are available to guests. "

The new hotel was built to the standards of the age, although it tried to adapt to the surrounding buildings with its mass. Although the official press of the time wrote that it had been incorporated into the silhouette of the castle with unparalleled architectural prowess (Budapest magazine, September 1979), its legitimacy was already disputed during its construction.

In the book Budavári séták - Házak, terek egykor és most [Buda Castle Walks - Houses, Spaces Once and Now], we can read about it: “Modern architecture evokes Gothic elements, the rebound at the attic evokes the buttresses, and the depressing effect of the large surface is well resolved by the long, colorful windows. Today, however, it is one of the most rejected buildings in Buda Castle: it disturbs the harmonious view of the Matthias Church and the Fisherman's Bastion with its huge block that does not fit into the environment. ”

The Hilton has really changed the image of the Castle and the view of Budapest, as the modern building is clearly visible from the Danube bank in Pest and has been part of the cityscape for 45 years now.

Cover photo: The old and new wing of the Hilton hotel today (Photo: Balázs Both / pestbuda.hu)