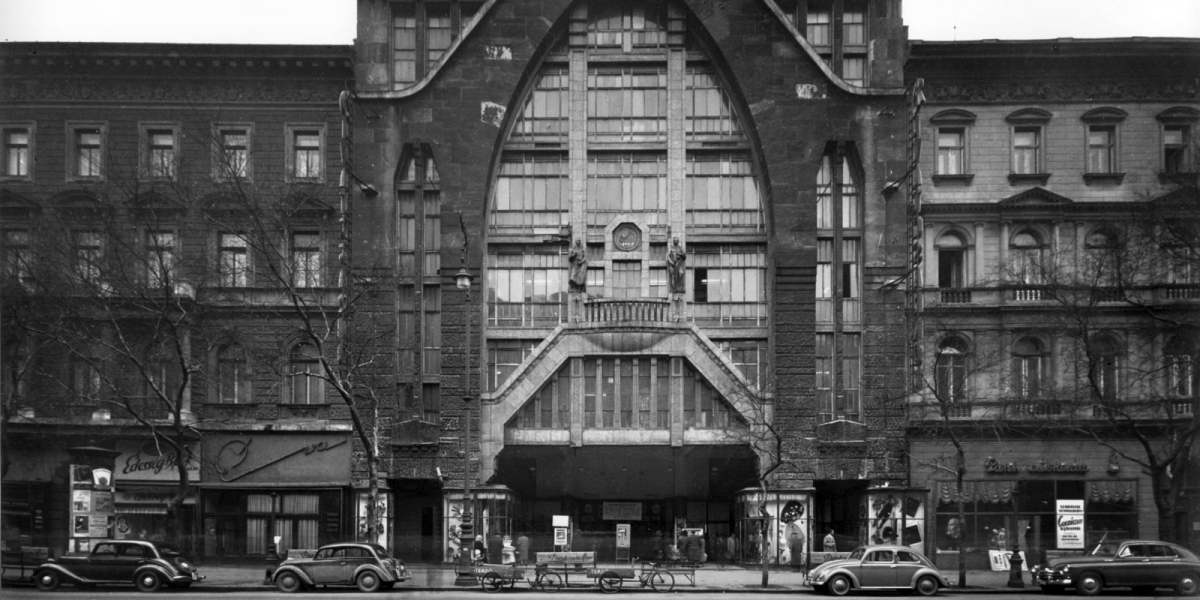 The Magyar Divatcsarnok [Hungarian Fashion Hall] moved from Rákóczi Road to Andrássy Avenue in 1957, to the former building of the Párisi Nagy Áruház [Párisi Department Store], which was nationalized after the war and used as a book storage. In the 1956 revolution, the store of the Fashion Hall at 72 Rákóczi Road was so damaged that a new location had to be found. The building on Andrássy Avenue was available, only 10 wagons of unsold books had to be disposed of.

After the defeat of the revolution, on 2 January 1957, when the ban on alcohol was still in force and the electricity network was not fully restored, that is, life was still far from returning to normal, it was a real sensation when on today's Andrássy Avenue, then Magyar Ifjúság Road, the Hungarian Fashion Hall reopened.

Before the war, the building housed Samu Goldberger’s Párisi Department Store, where one could buy a lot of things cheaply. We have already written about the opening and operation of the store on Pestbuda, now we remember an interesting element of its post-World War II history. 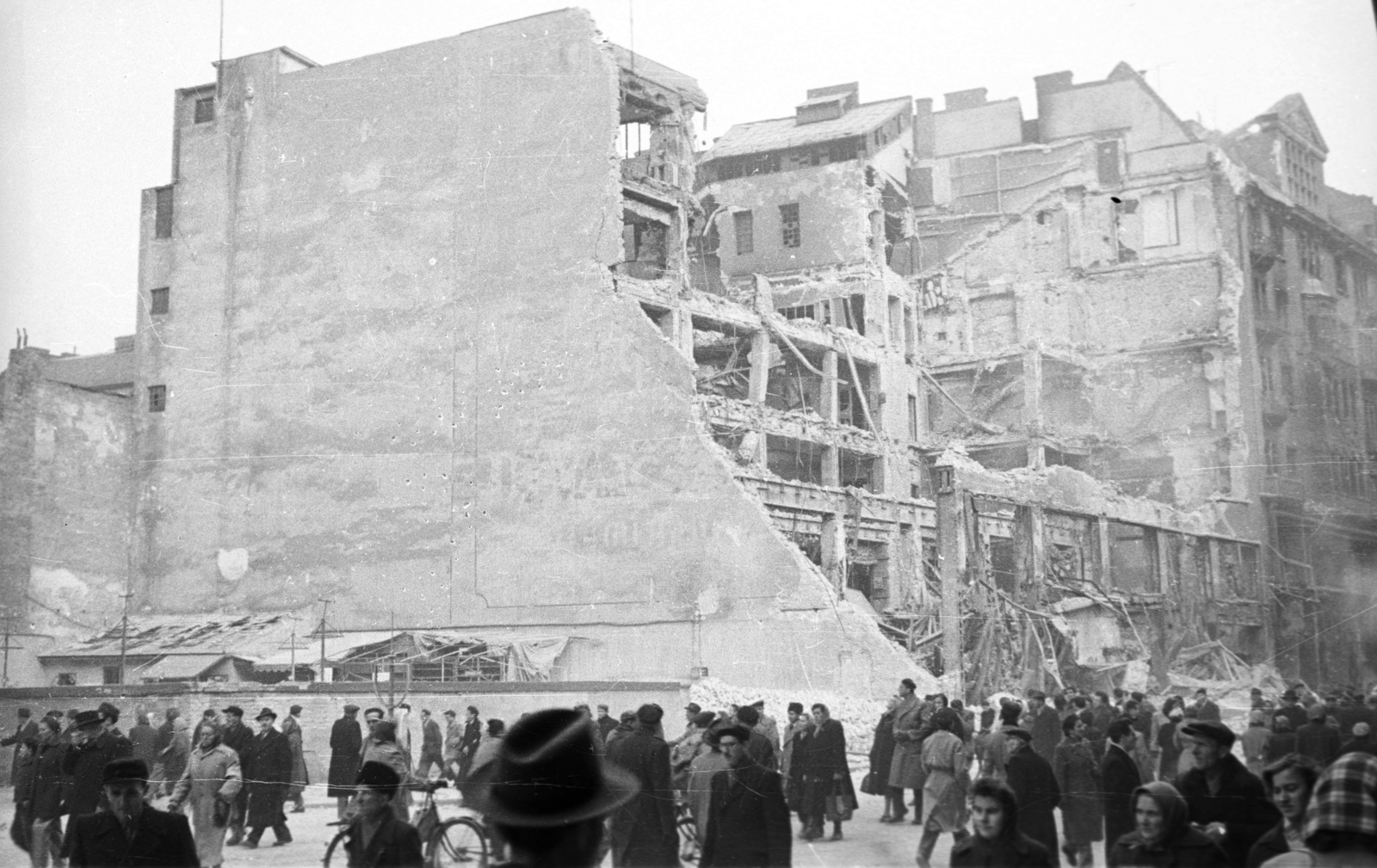 The Párisi Department Store did not suffer any major damage during the war, and the fantastic Lotz Hall remained intact. However, it was not reopened. The company running the store was, of course, nationalized, but the operators of the communist system that was emerging thought there was no need for such a store. The multi-storey building was used as a book storage.

However, in 1956, during the revolution, the building of the Hungarian Fashion Hall on Rákóczi Road was damaged and burned down, and a decision had to be made to replace it quickly. The choice fell on the building of the virtually undamaged Párisi Department Store, which was used as a warehouse by the Állami Könyvterjesztő Vállalat [State Book Distribution Company]. The relocation of the book storage has been on the agenda for years, but there was an article in the 4 January 1957 issue of Érdekes Ujság about what happened, describing the interesting circumstances of the period:

“This beautiful building has been used for many years as a book storage, and commerce has tried to reclaim it in vain countless times. The State Book Distribution Company clung to the building and would have been willing to move out only under unachievable conditions. However, the State Book Distributor has now been forced to make concessions: it has shredded some of its already unsold book stocks - ten wagons will be used as raw material for paper making - and has emptied the ground floor, first and second floors of the Párisi Department Store for the time being. ”

As a result of the arrangement, which started almost immediately after the defeat of the revolution, the store was replenished with a stock of 30 million forints (40 or even 50 million forints appeared in the contemporary press, presumably none of them was true), departments for technical and electrical goods, tableware, footwear, fabrics and silk, and home furnishings operated first. On the opening day, 2 January 1957, the queue stood all the way to the Outer Ring Road, people were so curious about the novelty. A total of 350 employees were waiting for customers. 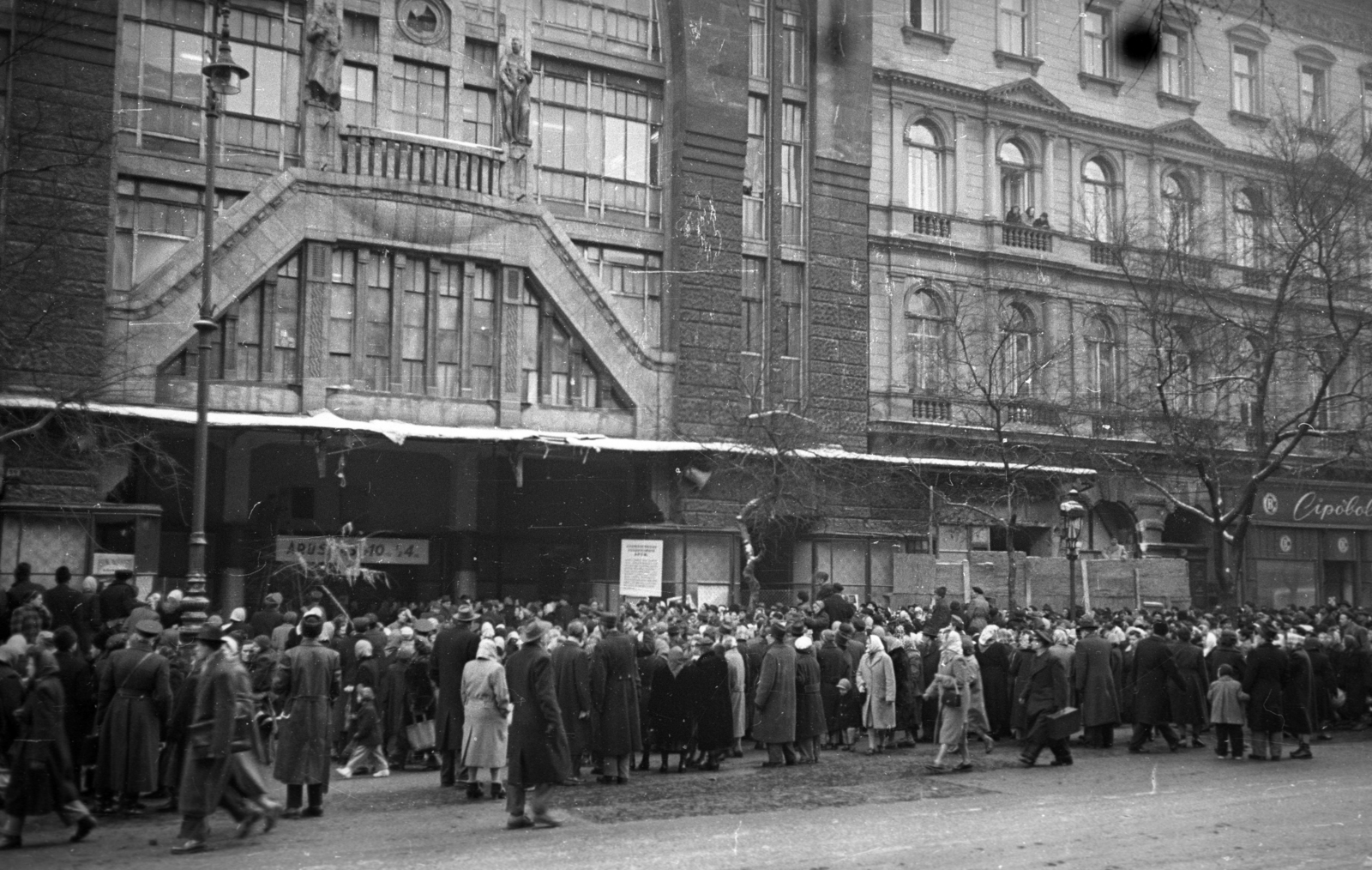 However, no one had any idea when the book storage could be expelled from the upper floors. Not so much that they even put out a tender to see if anyone has a good idea. Before its opening, on 1 January 1957, Director István Tarján said the following in Népszabadság:

“Unfortunately, for the time being, the 3rd, 4th, 5th and 5th floors are the warehouses of the Book Distribution Company­ and until they can find a suitable room, we cannot open the rest of the store, we set a reward of HUF 5,000 for those who find a suitable storage space for the Book Distribution Company, as it should move out as soon as possible, because ­we could only upgrade the lighting and heating of the whole store after that. ”

The five thousand forints were big money at the time, it corresponded to an average salary of several months, or in other words, almost a new Orion television could be bought for that. 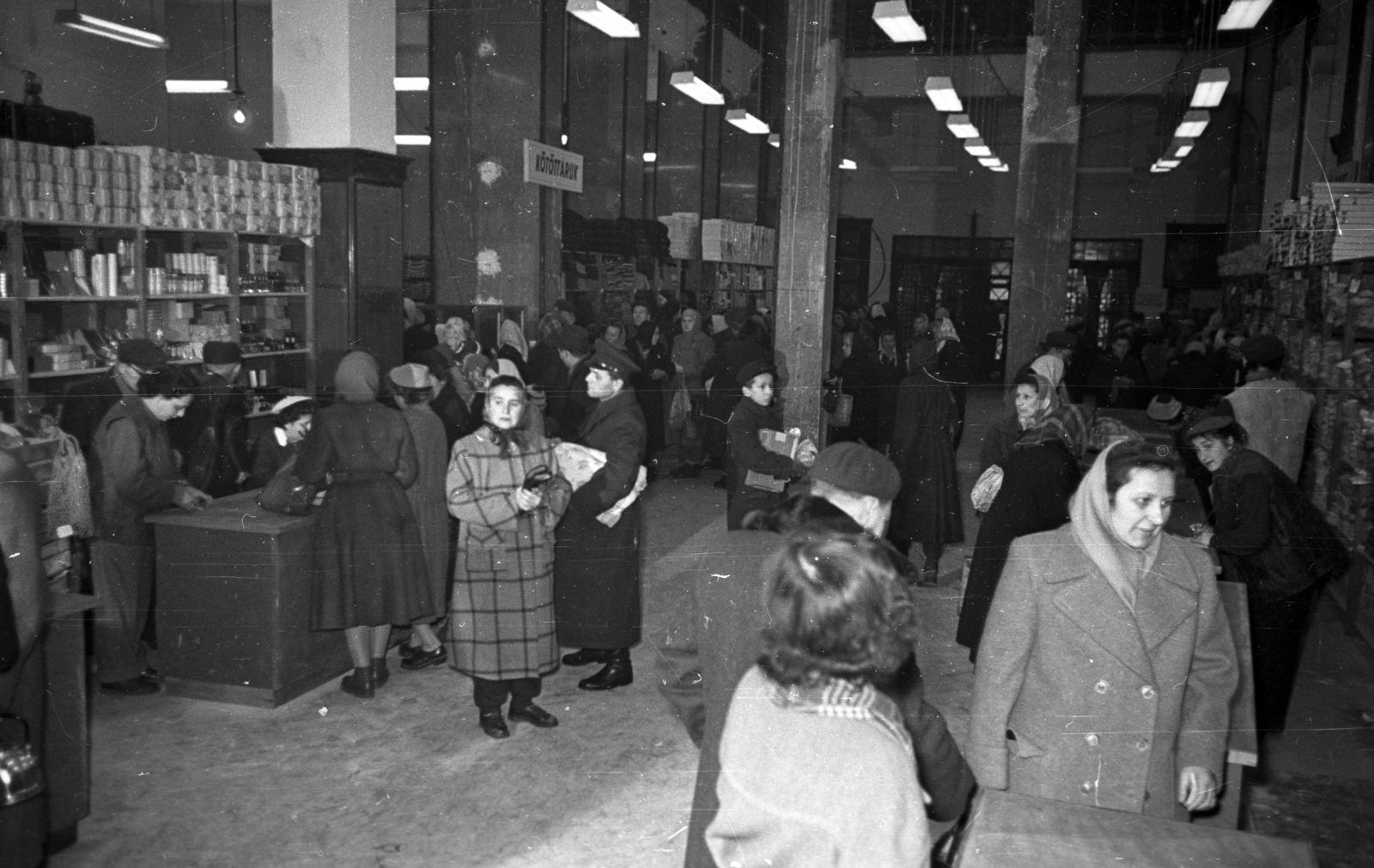 However, this place was intended to be temporary for a long time. About the Hungarian Fashion Hall in July 1957, the Ministry of the Interior decided that one of the most modern seven- and eight-storey department stores in Central Europe would be built on Rákóczi Road. A month later, however, the newspapers reported that the book storage had been relocated and that the Hungarian Fashion Hall would remain in the building of the Párisi Department Store. 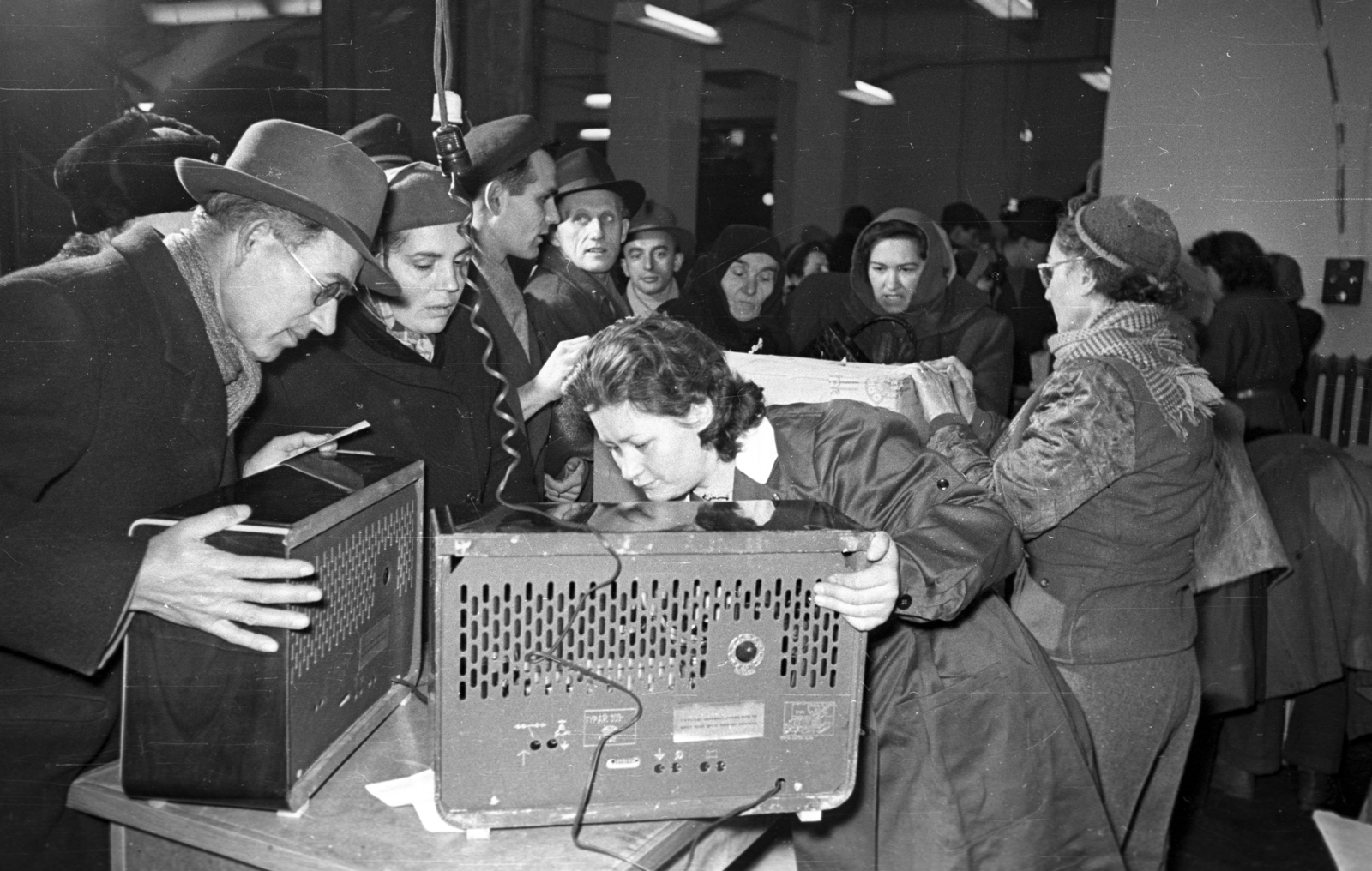 The book storage  finally moved to Visegrádi Street in 1959, the building was renovated in 1963-1964, and reopened on 1 December 1964 as the Divatcsarnok [Fashion Hall]. 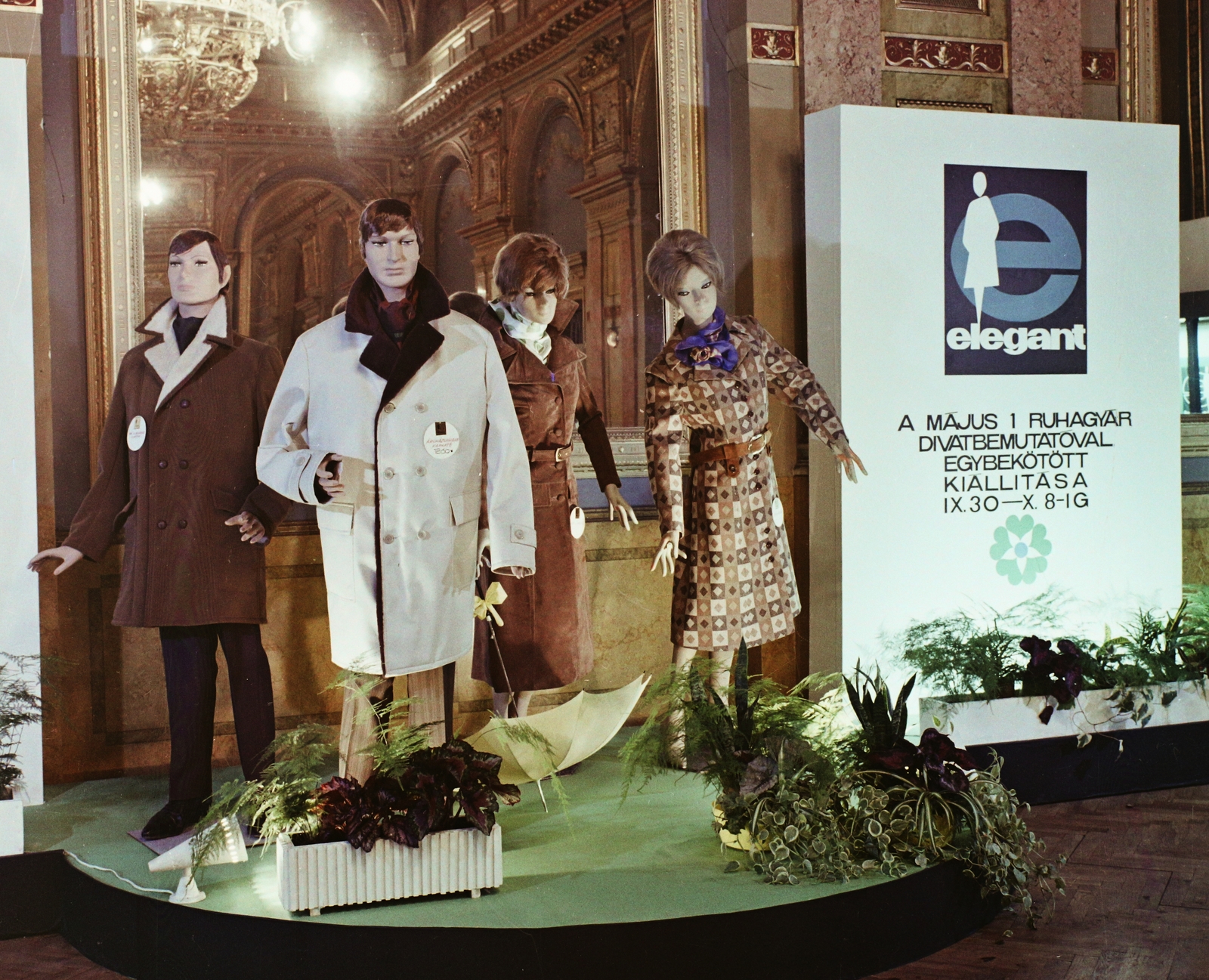 The building of the old Hungarian Fashion Hall on Rákóczi Road was also renovated, where the totally different Otthon Áruház [Home Store] opened in 1961.

Cover photo: The facade of the Fashion Hall in 1957 (Photo: Fortepan, Budapest Archives. Reference No. HU_BFL_XV_19_c_11)