Although the construction of bridges has a long tradition in Budapest, in the XIX. century there was not enough expertise and technology at home for this job for a long time. Foreign engineers also originally built the Chain Bridge, the Margit Bridge and the Railway Bridge. The first completely Hungarian Danube crossing was the Ferenc József Bridge, which was built in 1896 for the celebration of the millennium of Hungary.

In the case of the first permanent bridge, the Chain Bridge, of course István Széchenyi was “responsible” for the fact that the bridge was not built according to the plans of a Hungarian engineer. There was also a Hungarian applicant for it, as Pál Vásárhelyi also had an idea, and even Károly Maderspach submitted his plans for the bridge. Behind Maderspach stood several successful bridges and not incidentally reputable supporters. The owner of an iron forge in Ruszkabánya not only built bridges, but in fact he also built the first tied-arch bridges made of iron.

However, Maderspach's bridge planned between Pest and Buda could not be built. In fact, with incredible luck and insight, Széchenyi found William Tierney Clark, the bridge architect who was able to design the largest, most modern bridge in the world at the time, because until the 1830s, technology was simply nowhere available in the world that a bridge could have been built between Buda and Pest. Clark's plan included the technical breakthroughs — such as the somewhat stiffened and wind-protected bridge track — that made it possible to build the bridge. 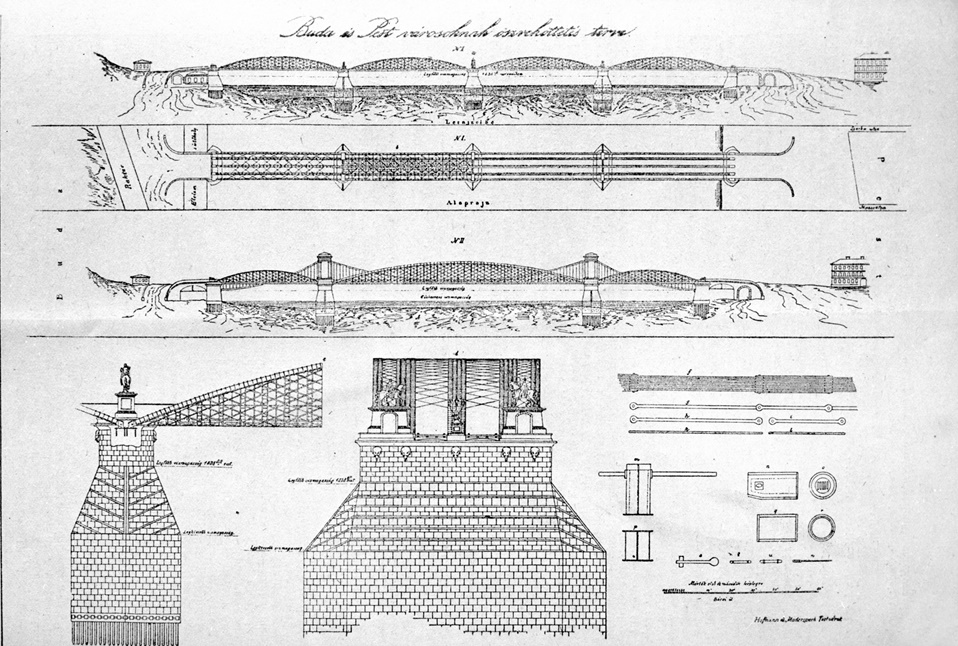 Much of the bridge's iron material also came from abroad, the chains from England, for example, which Clark had insisted on at the beginning of his assignment. However, cast iron crossbars and railings were also made in Hungary.

At the time, in fact, this was the only way to build the bridge, as the right technology and expertise was not available at home.

A few decades later, however, it would have been possible for the Margit Bridge to be the work of a Hungarian architect; the expertise was definitely available, as one of the greatest bridge architects of Hungary, János Feketeházy also submitted his plan for it. However, in the international design competition of 1871–1872, during the multi-stage evaluation, the judges did not select his work, but the proposal of a French engineer.

Ernest Gouin was also a good choice because not only did he design the bridge, but the company behind him was able to secure the construction of the bridge. According to the custom at the time, this was a precondition for starting the tender, ie the designer also had to submit a bid for the construction.

Among the plans submitted, it was not the price that mattered, there would have been a cheaper solution, but Gouin brought not only his international experience, but also a reliable production base, i.e. the iron materials were made in France. The Margit Bridge also included a “Hungarian product”: the arches of the Buda opening were made in Hungary. 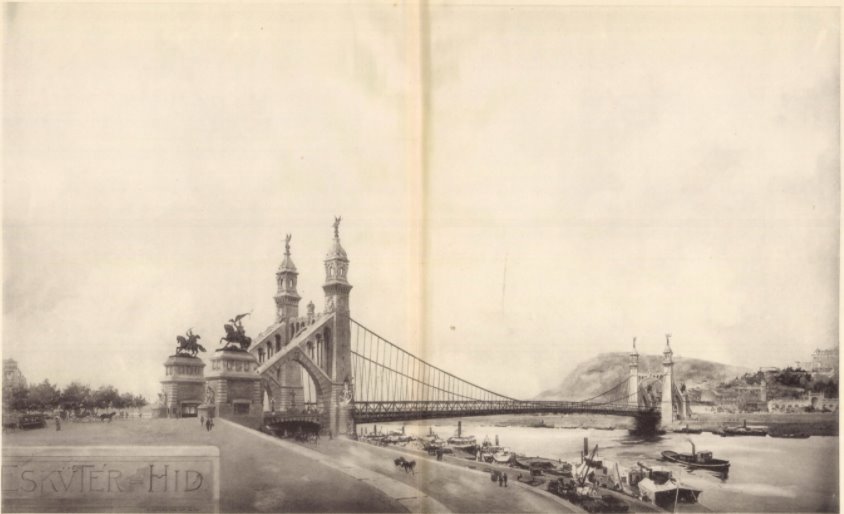 At the same time as the Margit Bridge, the railway bridge was built in 1877. Here, too, an international tender was issued in 1871, but only contractors were sought on this tender, because in principle there was already a plan prepared by Hungarian engineers, the applicants would have been responsible only for the implementation of this plan. At that time, however, it turned out that the Hungarian plan was too expensive. The construction of the bridge was eventually won by a French engineer, Amádé Filleul-Brohy, and a French company, Cali et Cie.

The French came up with three plans of their own, but they were not appropriate either, and then they presented a fifth plan (the first one was from the original Hungarian, the next three from the French contractors), most likely made by János Feketeházy, and the bridge was built based on it. Although the plan was supposedly Hungarian here, the ironwork for the bridge was made at the Cali et Cie plant near Paris.

The plan of a German design, the work of German designers Kübler, Eisenlohr, Weigle, won first place in the international tender for the bridge in Eskü Square, ie the Erzsébet Bridge, in 1893. However, they designed a cable bridge, for which the cables had to be obtained from a foreign factory, therefore the Erzsébet chain bridge was built according to the plans of a Hungarian engineer team, designed by József Beke and István Gállik, and measured according to the statistic calculations of Antal Kherndl, between 1898 and 1903, for which they did not have to acquire materials from abroad.

A designer was sought for the Ferenc József, ie today's Liberty Bridge, in the same tender as for the Erzsébet Bridge. The winning application for the crossing was submitted by János Feketeházy, and the Ferenc József bridge was built between 1894 and 1896 according to his plans and exclusively with Hungarian materials.

The plans for the reconstruction of the Chain Bridge were put on paper by the design team of the Erzsébet Chain Bridge, ie József Beke and István Gállik, which was a feat because a modern bridge had to be built within the framework of the old bridge. Practically a completely new bridge was built between 1914 and 1915, which was very similar to the old one.

After World War I, the support of Hungarian industry was important, and it was out of the question for foreign engineers to design the new bridges. In 1930, tenders were issued for Hungarian engineers for both Boráros Square (later Horthy Miklós) and Árpád Bridge, but in the end none of them were built according to the tenders. The Horthy, today's Petőfi bridge was finally built according to the plans of Pál Álgyay-Hubert and opened in 1937. The Árpád Bridge was designed by the bridge department of the ministry, and although work began in 1939, it stopped in 1943 and was finally handed over in half width only in 1950. 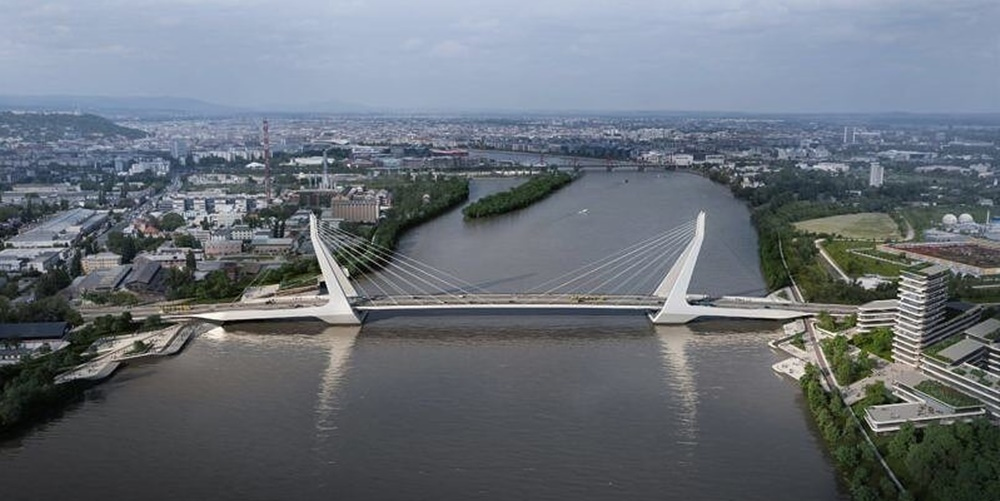 The winning plan for the first structure of the Hárosi, ie today's Deák Ferenc bridge - was selected in an international design competition in 1985 after many decades, and here the winner was Tibor Sigrai, an employee of Uvaterv, and he was also the designer of the Rákóczi bridge handed over in 1995 .

An international design competition was again issued in 2017 for the bridge over the main branch of the Galvani Road Bridge. Among the many designers were several excellent Hungarian designs, but the jury found the design of the Dutch UNStudio and the British Buro Happold Engineering the best. However, due to the peculiarities of the terrain, the bridge over the Soroksári-Danube branch was designed by Hungarian engineers.

It is not at all uncommon for a major work such as a large river or a strait bridge to be built by engineers and contractors selected on an international design competition. There are many bridges in the world that have been put on paper by a large international design team, and the components of the bridge have travelled thousands of miles to their place. There are many bridges of Hungarian designers in many parts of the world, and bridge parts in several different places came from Hungarian factories.