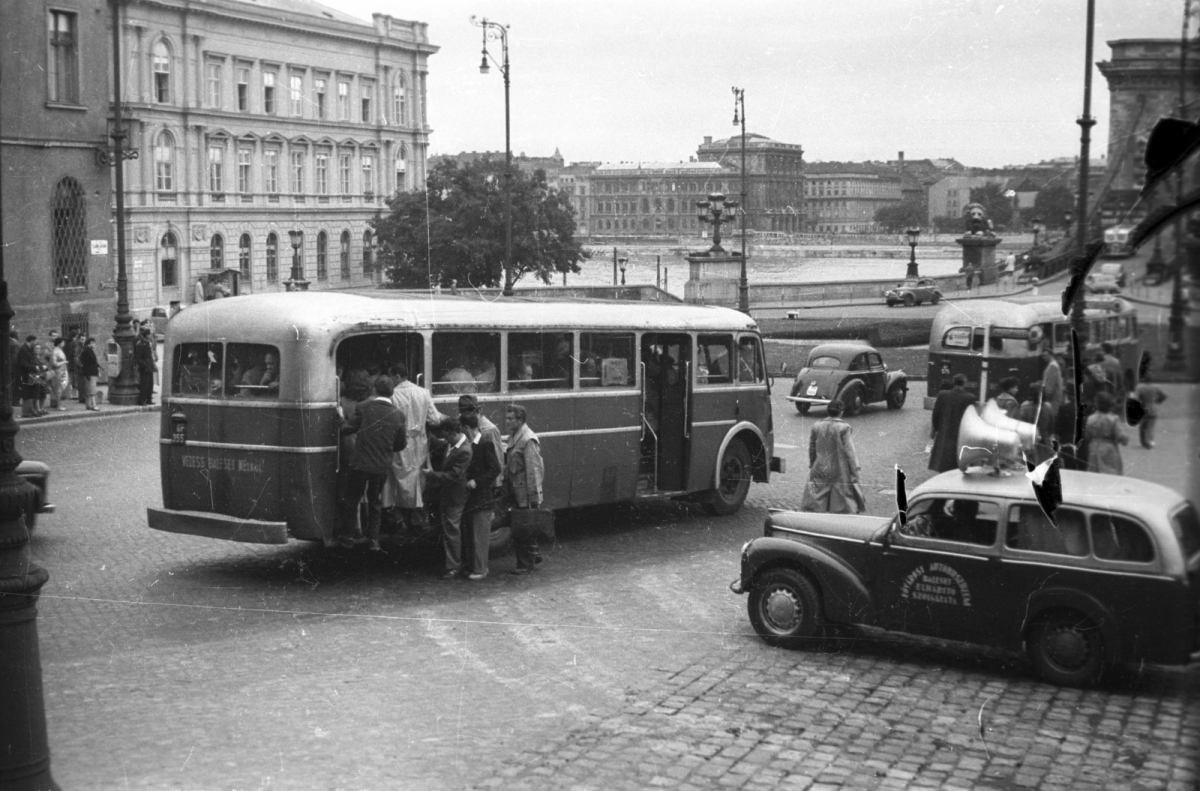 Sixty years ago, Budapest was at a crossroads - the transport of the capital in the 1960s

Budapest's traffic was at a crossroads 60 years ago as well as now. Experts sought answers to questions about how much the then outdated public transport network needs to be developed and how to prepare the city for the expected car traffic. Studies have also helped to make these decisions. Based on a work published 60 years ago, we present the transport dilemmas of Budapest at that time.

The duration of city travel has always preoccupied researchers. Kornél Zelovich examined already at the end of the 19th century, how long it took to get to different parts of the city in Budapest. This question was later of interest to professionals, and 60 years ago an interesting study on the speed of urban transport was published in the Építés- és Közlekedéstudományi Közlemények [Construction and Transport Science Publications]. Dr. Dezső Szabó's study entitled A városi közlekedés sebességének forgalmi problémái [Traffic Problems of Urban Transport Speed] was published in 1962, but the underlying research was conducted in the late 1950s. 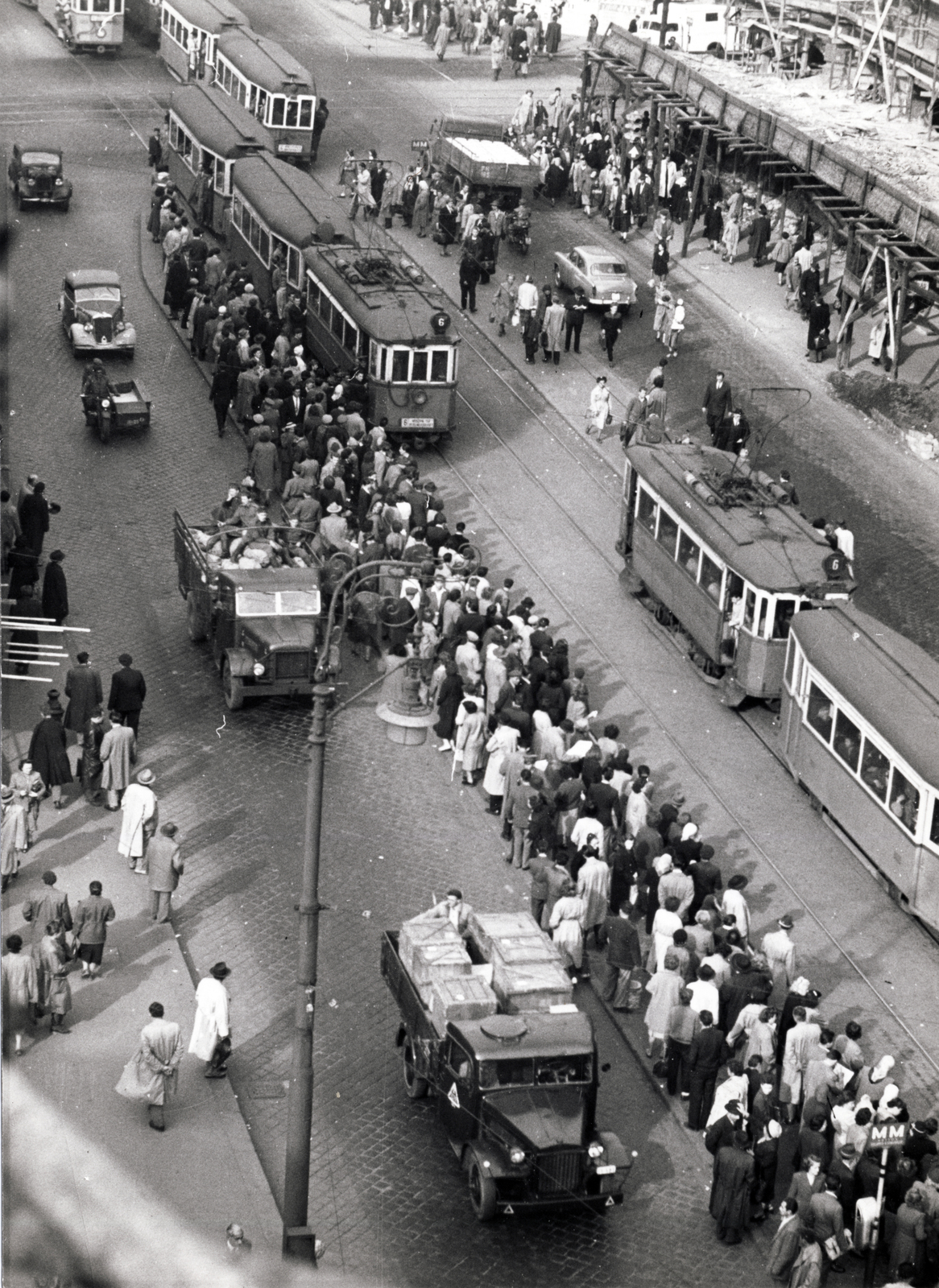 Budapest was facing significant changes at that time, when the transport decisions that determined the future, today's city, were decided. Let’s look first at what the differences were in the late 1950s compared to today’s city. There was no subway. Although construction began in the 1950s, the then economically unrealistic business was shut down in 1953.

There was no Elizabeth Bridge. The original Elizabeth Bridge, which was blown up in 1945, was a city bridge built on the traffic between the centre of Pest and the centre of Buda. It was decided in 1959 that they would not build it back, but build a more modern highway bridge. This meant that the entire Kossuth Lajos Street, Rákóczi Road, became an urban expressway.

The buses were smaller. In Budapest, articulated buses appeared  in 1960 with the reconstruction of old, scrapped buses, because by that time the old vehicles were very small. The same went for the trolley.

The tram network was much denser, but it was as old as they used vehicles even even from the 19th century, modern, coupled or even articulated vehicles, UV or home articulated, i.e. the Bengali appeared on the roads at this time. 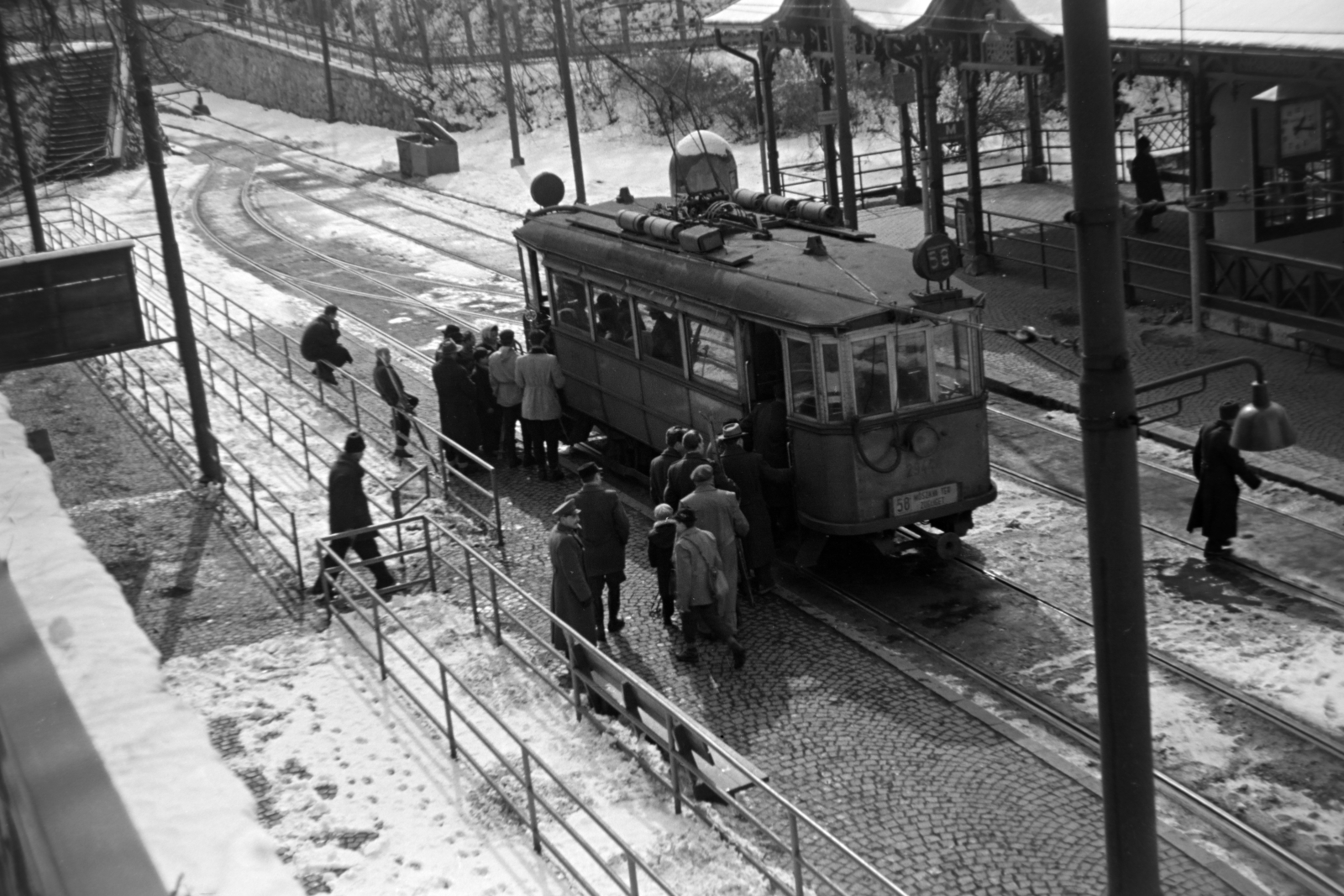 There was virtually no private cars, for until 1958 private individuals could not keep a car, only a select few.

The traffic lights at the intersection were manually adjusted by police. (This was the practice in Budapest until the mid-1960s, which had not only technical reasons, but the presumption that the citizens of Budapest would only follow the lamp's instructions if they saw the police officer.)

An interesting and still natural phenomenon for the 1950s was also mentioned in the study:

“For the sake of completeness, we also need to mention freight traffic, although the issues are very different from the problems of passenger traffic and freight traffic is concentrated in other places in general - often completely closed to transit traffic, e.g. at railway stations, factory yards, etc. "

Let's not forget that at that time almost all of the large factories were served by rail and industrial tracks, truck traffic, but even the urban truck and van traffic was negligible.

Let’s look at what the above article wrote in the early 1960s! One of the most important findings - which is still broadly true today - is that the average travel time between work and residence is almost constant, one hour, from the 19th century onwards, only the distance travelled during that time increases. 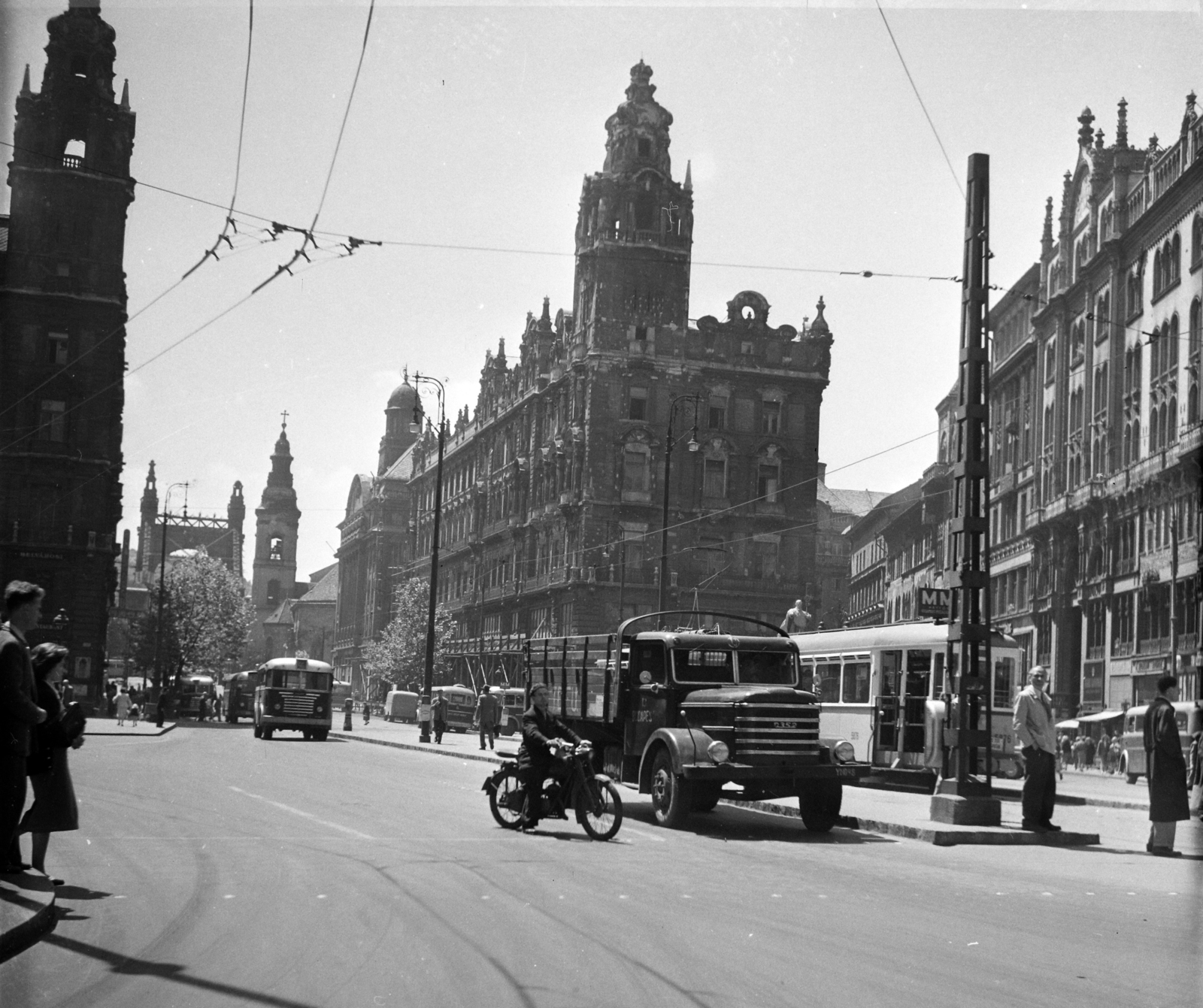 The study analysed at length the concept of traffic speed, its measurement, types, and made some interesting findings. To increase the speed of traffic in the city centres, it proposed the separation of traffic types:

"The most obvious way to eliminate congestion in cities is to keep out of traffic that does not belong there, ie. long-distance road traffic, which is also growing strongly, in other words to separate long-distance and local traffic."

The prevalence of cars in the given age could not be studied in Hungarian examples, therefore the experiences gathered in the big cities of Western Europe (London, Hamburg) were studied. From this, the author concluded that public transport will be needed in the future as well. 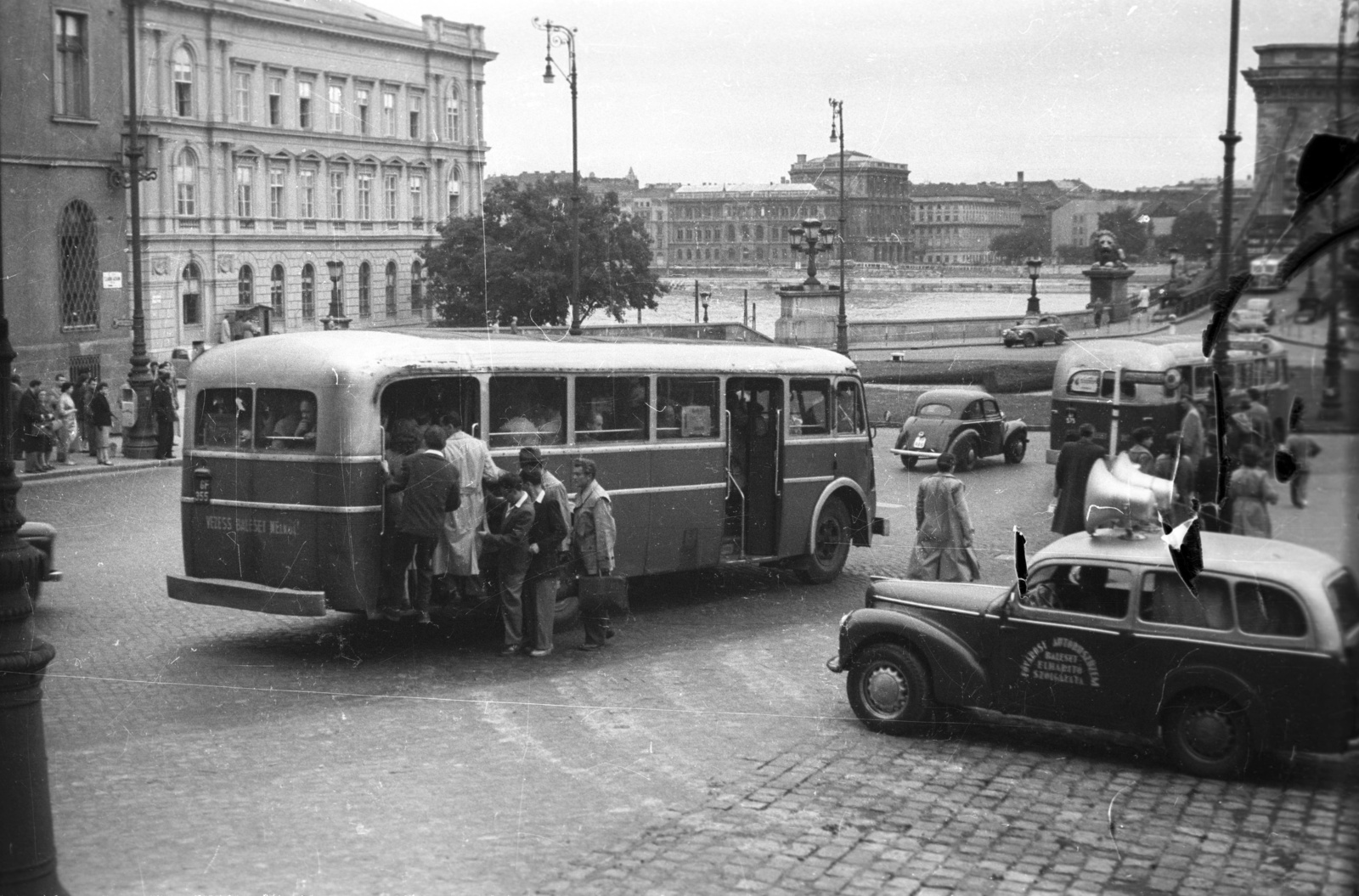 He made interesting statements about the individual means of transport, it was clear that the number of cars would increase in Budapest in the future as well. However, he saw the future of trams in public transport as uncertain:

“The usual form of the tram is considered obsolete. It is extremely sensitive to road traffic in terms of speed, so its speed during rush hours is easily prone to decline. This sensitivity can be reduced by using modern vehicles and decoupling the track from road traffic. ”

He saw the trolleybus and the bus as similar:

“Both fit into the road traffic, it roughly takes on the speed of this, but it can only partially transfer it to the travel speed, they are sensitive to road traffic congestion. The trolleybus has the advantage of a high degree of acceleration, which is offset by greater mobility of the bus. In terms of speed, the bus, which has virtually no driving difficulties, is preferred. They have the same capacity but less than that of the trams. ”

There is no mention of the Budapest underground high-speed railway in the study, which is interesting because in 1959–1961, when the manuscript was written, the semi-finished metro was underground, although it was decided to continue building it only a few years later. 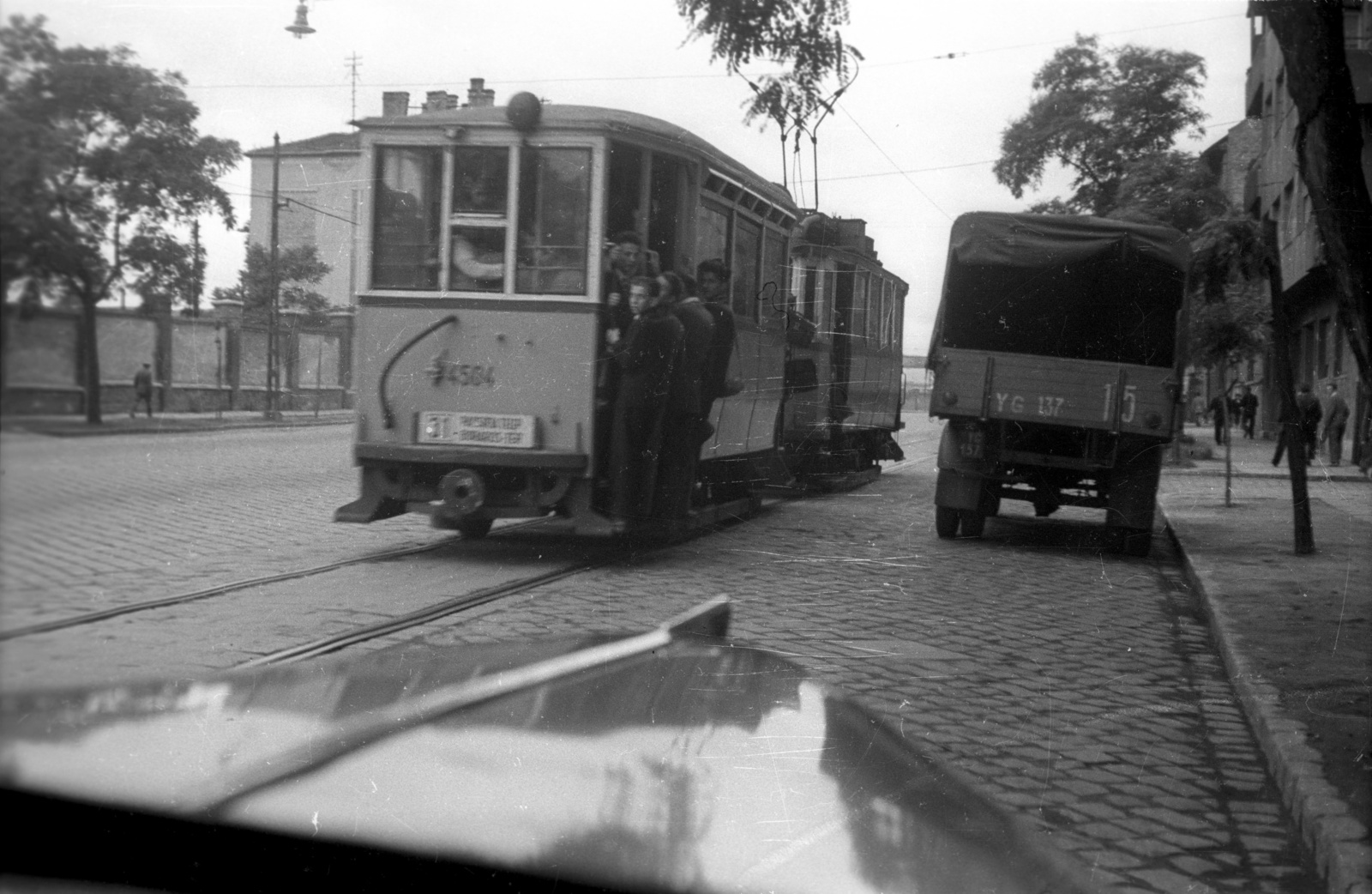 The vehicles were simply too small, people were hanging on the tram (Photo: Fortepan, FSZEK Budapest Collection)

In the 1960s, Budapest was facing a turning point in transport. Public transport was coming to an end, but it was virtually monopolistic. It was expected that there would be more and more cars on Hungarian roads, so this and similar studies were necessary in order to develop the transport system of Budapest.

But there were bad directions for the next 60 years. These have been corrected in recent years based on experience. Budapest's transport is now at a turning point again, new habits and new demands have appeared, it would be very interesting to see that in 60 years, towards the end of the 21st century, how the descendants will write about the present period.