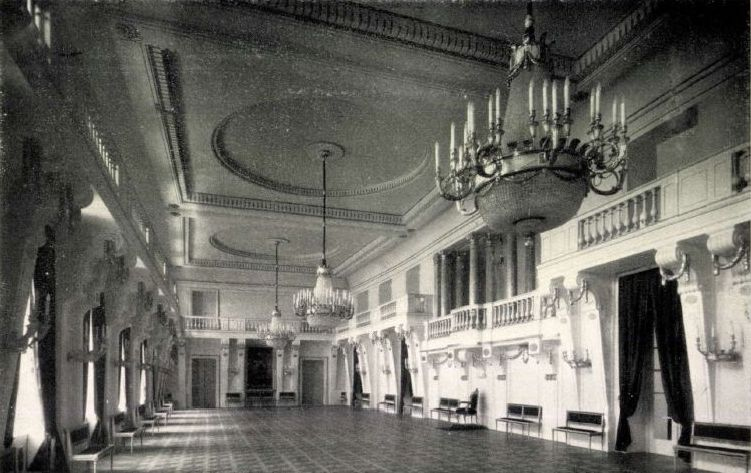 Walking in the Buda Castle, between the one- and two-storey houses of the narrow Országház Street, we would not even think that one of them hides a huge ceremonial hall. Although it is actually logical, as the name of the street already suggests that the greatest lords of the country once appeared here, and a representative hall was built for them. The life of the adventurous room took a turning point at the end of May 1929, as it was restored to its old glory after decades of neglect.

At 28 Országház Street in the Buda Castle, in the 18th century, the Clarisses built a Baroque-style monastery, which, after the dissolution of the order, was given by Joseph II to the Helytartótanács [Locotenential council] for use and at the same time transformed it based on the plans of Franz Anton Hillebrandt. 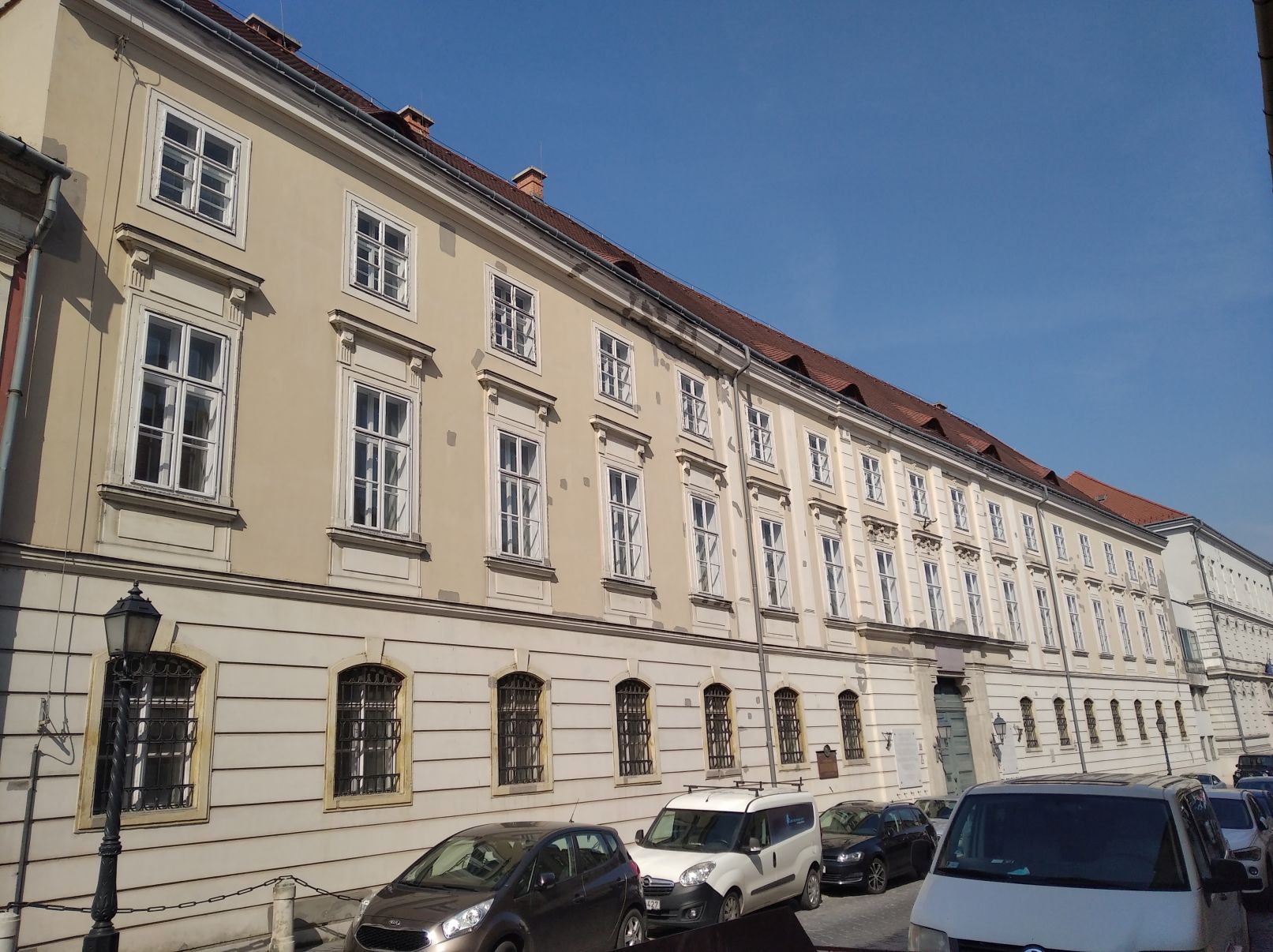 The original chapel was turned into a huge ceremonial room was in copf style [Zopfstil, late rococo style]. Its dimensions were truly impressive: it was thirty metre long, fifteen metre wide, and just as tall. The Locotenential council usually held its receptions here, and on three occasions (1790, 1792, 1807) it also housed the National Assembly, the lower house met in the ceremonial hall. The name of the street preserves the memory of this. 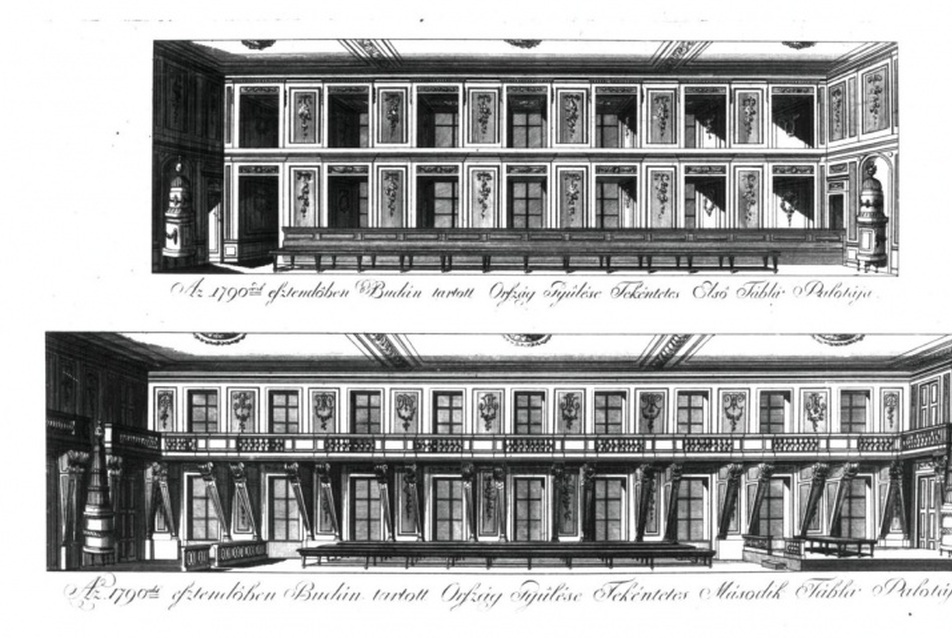 After the Austro-Hungarian Compromise, the Ministry of the Interior used it: it placed the first district police station, a telephone exchange here, and the National Archives in the right wing of the building complex. After the own building of the National Archives based on Samu Pecz's plans was built at the Vienna Gate, the archives were moved there in 1926. The National Committee for Monuments has previously considered the ceremonial hall to be restored, and the opportunity to do so has already opened up after the move. Through the intervention of Miklós Perczell, head of the department, dr. Béla Scitovszky, the Minister of the Interior managed to raise the amount needed for the restoration. 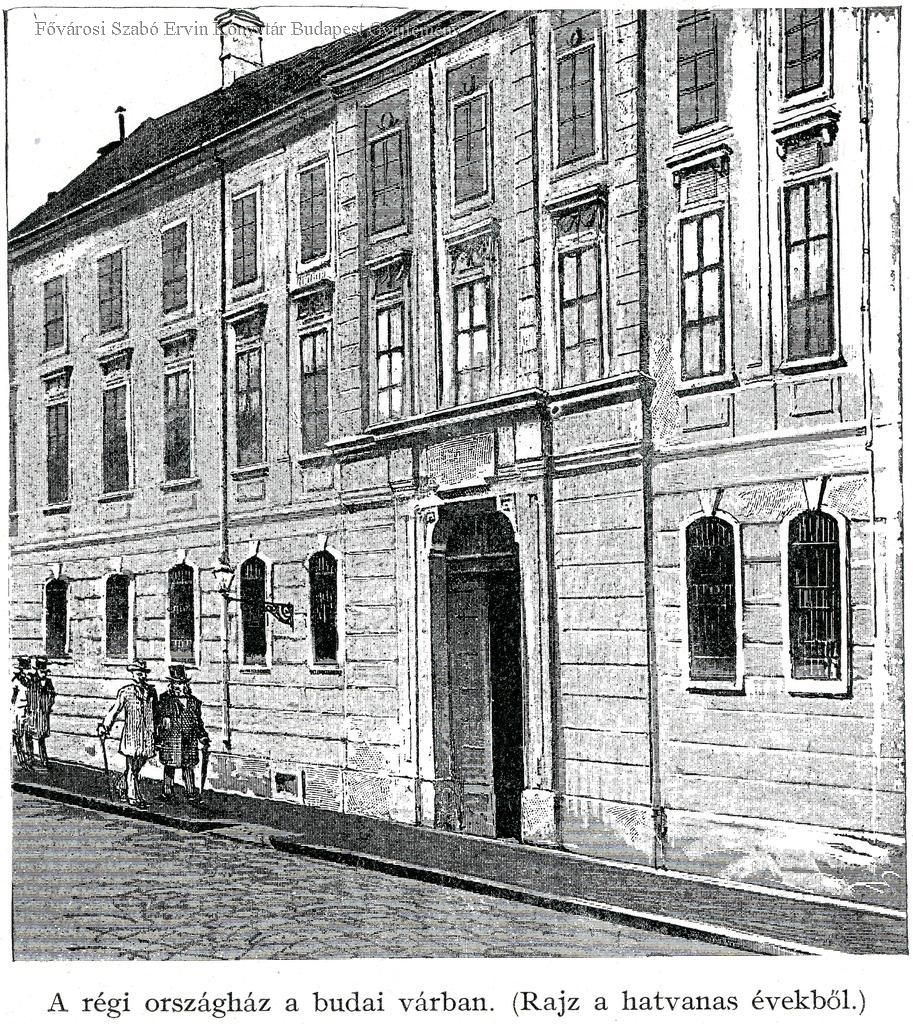 A drawing depicting the building from the 1860s (Source: FSZEK Budapest Collection)

As Jenő Lechner emphasized the character of the building as a significant monument, he was entrusted with the planning of the renovation. The restoration covered the entire building, but the biggest volume of work was the restoration of the ceremonial hall. In this, a new style-appropriate ceiling was created, as the original was replaced by a simple flat ceiling in the 1870s. According to the new design, the fields recessed in the ceiling were framed by dentilated moulding, with a smaller circular field in the middle of each field. 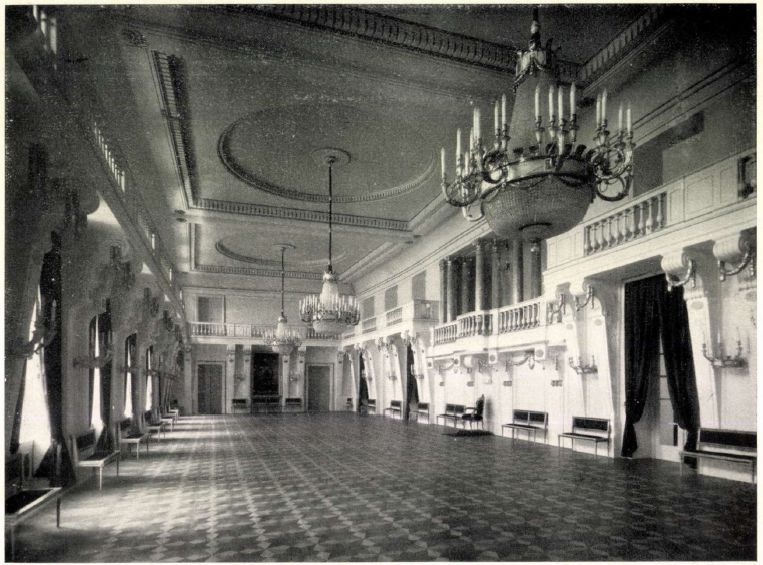 The ceiling of the ceremonial hall after the restoration (Source: Magyar Építőművészet, No. 5, 1929)

The gallery with a ballustrade which was held by the copf style consoles around the ground floor, was also rebuilt. The design of the gallery is the same as the balcony of the Hungarian Embassy in Vienna - the building on Bankgasse was also the work of Hillebrandt. The floor of the room was also replaced, parquet flooring with an ornate pattern was laid, which became a less fortunate solution due to its strong tones. The ceremonial hall was dominated by white, yellow, and gold, while the middle lodge was divided by bluish marble columns. The colour splendour was also enhanced by the furniture covers and the silk curtains, which were red. 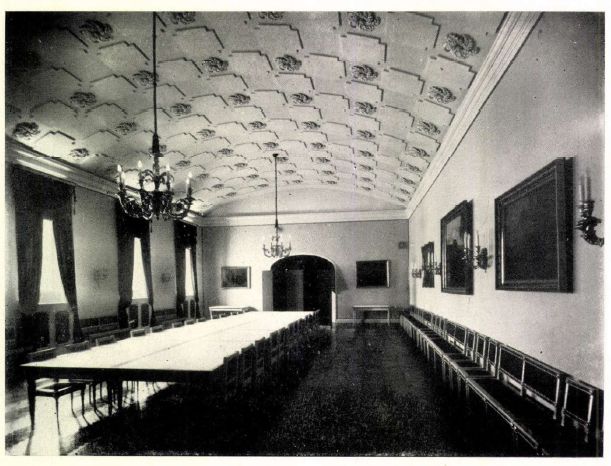 Room renovated for the purpose of the buffet (Source: Magyar Építőművészet, No. 5, 1929)

In addition, the ceremonial hall has been expanded with a coffered segment vaulted buffet and a cloakroom to make the ceremonial hall suitable for large-scale receptions. These were located in the right wing of the building, perpendicular to the ceremonial hall. Along the longitudinal side of the hall, a smaller salon was also set up, which also included an empire furniture set and an empire gilded bronze clock. From the small salon there was also a balcony towards the courtyard, and of course the courtyard was arranged during the construction. Along with the ceremonial hall, the rooms leading to it were renovated: the driveway, the white corridor covered with a barrel vault and the monumental, whitewashed staircase in the right corner, the floor of which also served as a foyer. 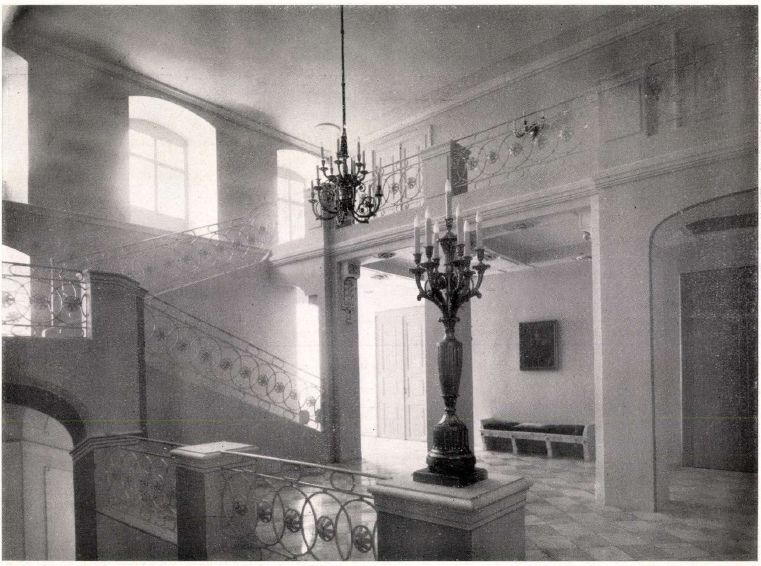 The restoration also extended to the foyer (Source: Magyar Építőművészet, No. 5, 1929)

The work was carried out by the architects Sándor Havas and Aurél Ács in the winter of 1928-29, and the products of applied art were made in the Resofszky studio. The ceremonial hall was handed over on 23 May 1929, and the first social evening was held the following day. The financially sensitive public was, of course, curious about the costs, which were magnified by sensationalist newspapers. For example, the 25 May 1929 issue of the Esti Kurír wrote the following:

An instructive tale for children and adults about one million pengos, which is actually 280,000. A small game with numbers, or the price of 200,000 pengos for a Pálffy watch that was bought for six thousand pengos. (…) Contrary to these figures, there is some overdraft, as only 208,000 pengos were earmarked for the restoration of the building.

In any case, the profession praised the restoration, because Jenő Lechner was really able to show the nobility of the copf and empire styles. The Építő Ipar - Építő Művészet worded it as follows:

The restored hall is stunning in beauty. Simple, uniform, noble and stylish. We can be happy that the statesmen with an understanding artistic spirit, with an excellent architect, enriched the Hungarian culture with such a great treasure. (…) It was an expense on the part of the state that should not be regretted because it presents the past glory of our nation to the whole world. 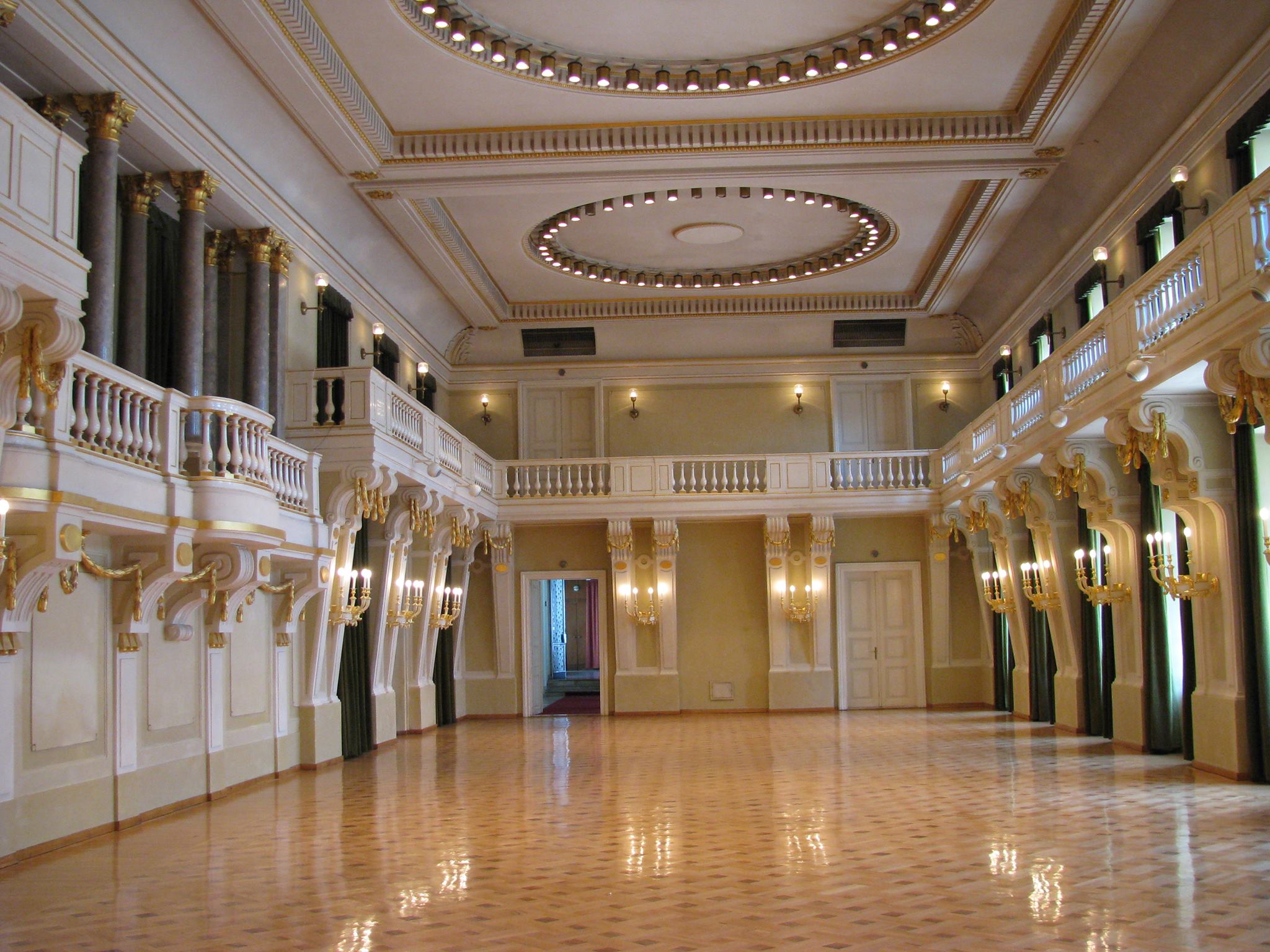 The ceremonial hall as the Congress Hall of the Hungarian Academy of Sciences in 2016 (Photo: MTA)

During World War II, the roof of the building was completely destroyed. It was quickly restored in 1949, but it took a decade and a half for thorough work: it was completed in 1963-1964 under the direction of the architect of the Középülettervező Vállalat [Public Building Design Company], László Borsos, after which the research institutes of the Hungarian Academy of Sciences used the building. Its function did not change until recently, but it was returned to the Ministry of Interior a few years ago.