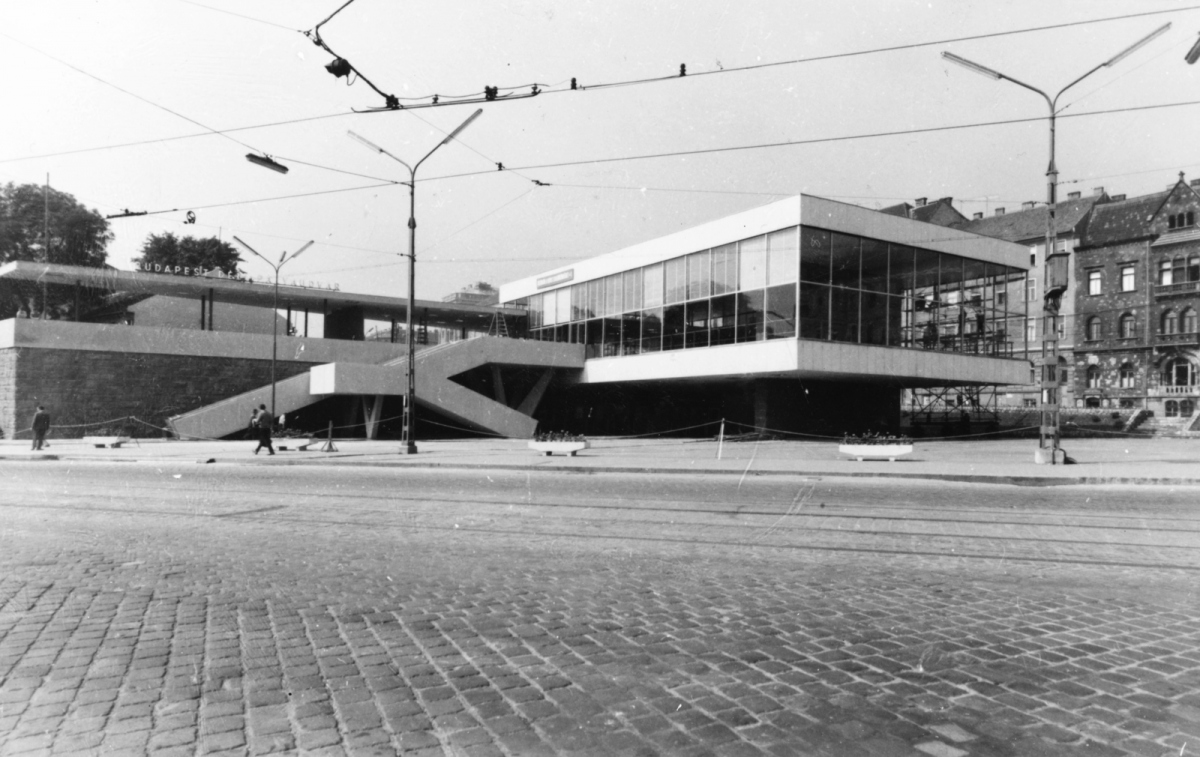 The first “modern Déli” was built 60 years ago, but we can no longer see it today

The Déli Pályaudvar [Southern Railway Station] has been serving rail traffic since 1861. The current one is its third station building since its opening. The most interesting was probably the second building, which was handed over 60 years ago, in 1962, and which stood in its original form for barely 13 years. We remember this first “modern Déli”.

The old Déli Railway Station, which opened in 1861, actually consisted of two buildings running on either side of the tracks, one for arriving passengers and the other for departing passengers, the two being connected by a wooden roof structure, and under that roof were the tracks.

But traffic increased so much in the late 1950s that the old (half) station building could no longer serve it, and access to the tracks was also dangerous. The situation became untenable, action had to be taken. Thus, a new station building was soon built, designed by György Kővári, one of the most innovative architects of the period, and opened on 15 June 1962. 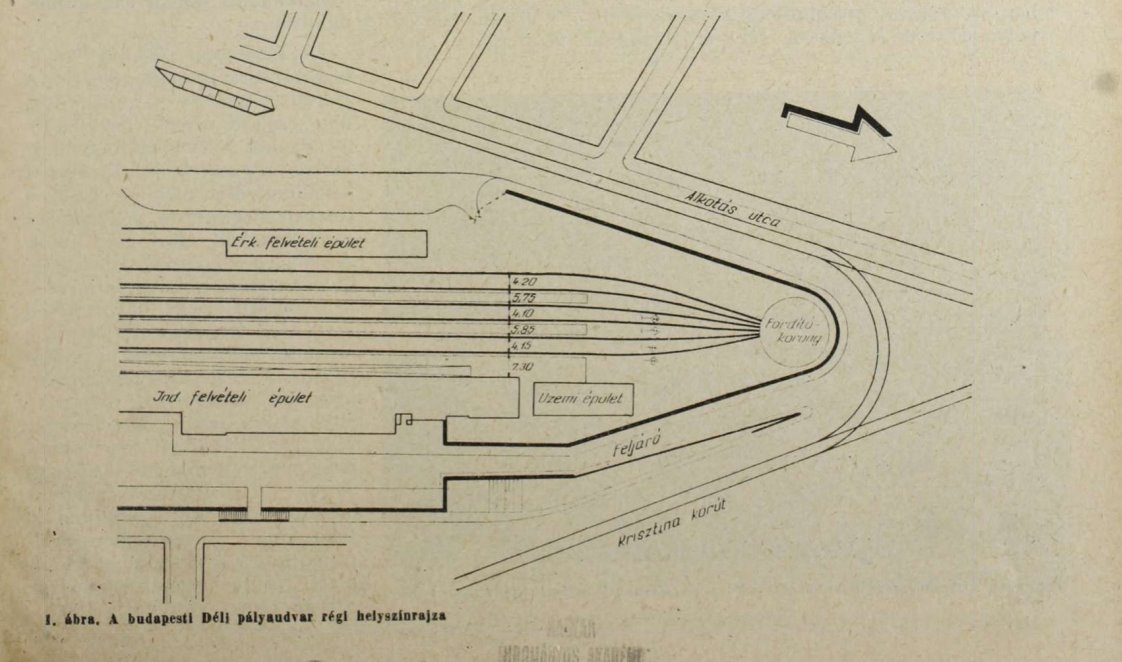 Drawing of the old station in the pre-war state (Közlekedéstudományi Szemle, September 1962)

The tracks also had to be rebuilt, as they had a special solution until then. Because the space was very cramped, the Déli did not have a “normal” marshalling yard, the equipment for turning the steam locomotives, the turntable could only fit in one place at the city end of the train station. During the reconstruction in 1962, this turntable was removed, so that the new station building could be built not next to the tracks but in front of them. 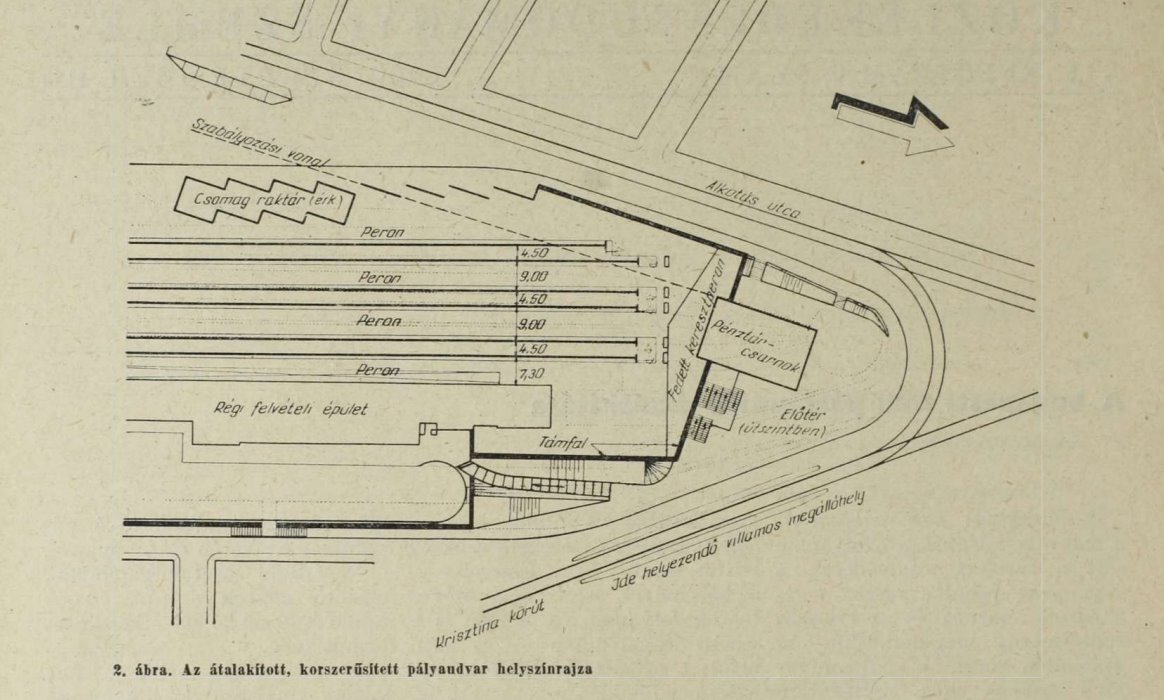 György Kővári dreamed of a modern building instead of a turntable, where the windows with huge, dark green heat-protective glass were lined with a wall covered with white stone tiles. The waiting room was connected to the street level by an elegant flight of stairs. The new building was completed in just under six months, as construction began in January 1962 and it was handed over on 14th June. However, even the old admission building remained at that time.

A real front platform was established in front of the tracks, so the passengers no longer tumbled through the tracks, and even the platforms between the tracks were widened, meaning that trains could be reached comfortably and safely. 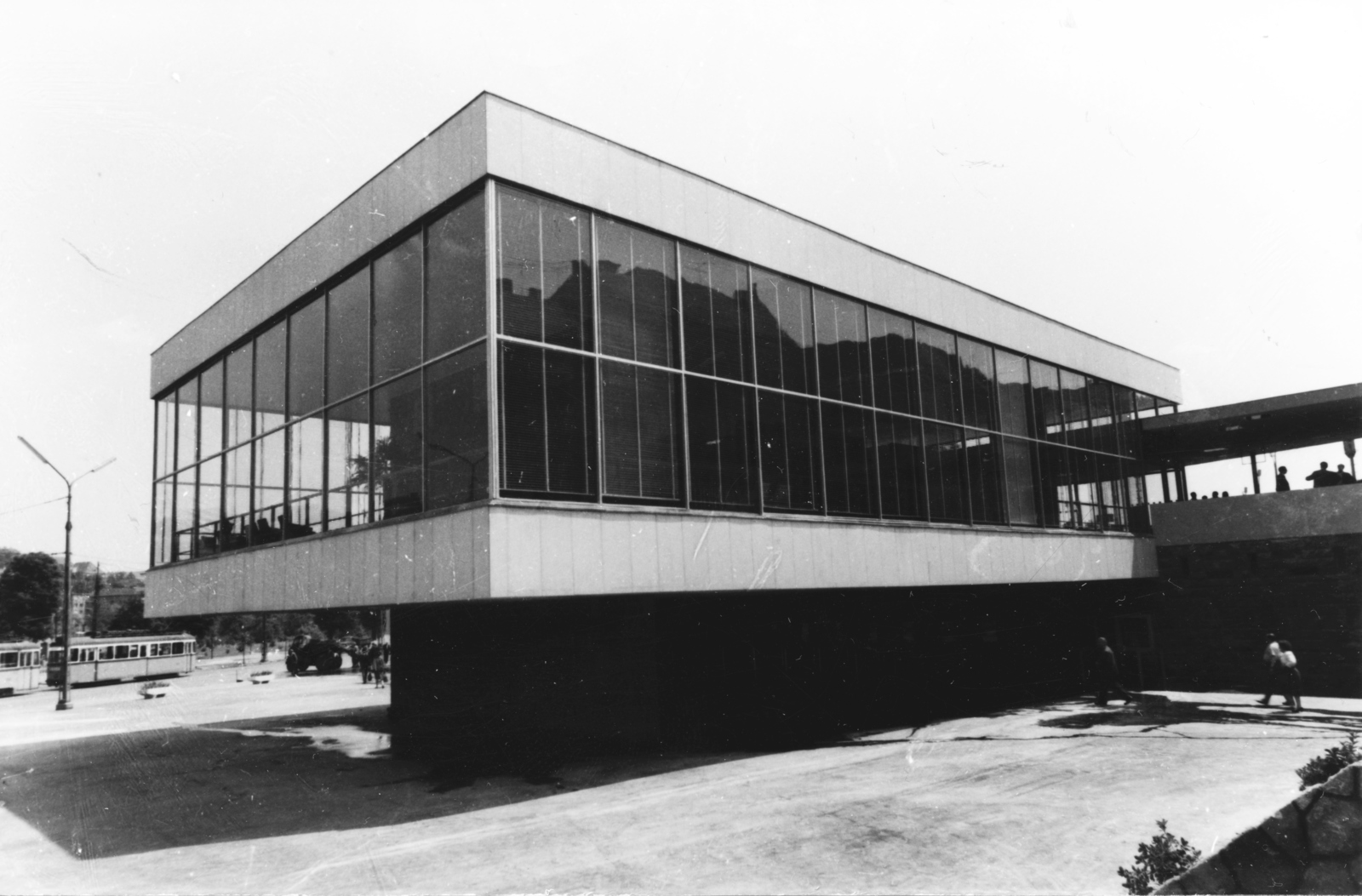 The work was already made temporary, Kővári himself wrote about it in the May 1973 issue of Budapest:

“ The conversion in 1962 was only appropriate to ensure that the increased traffic on Lake Balaton was accident-free and was built on a temporary basis.

The location of the underground railway hall was already known at that time. In 1962, the glass hall was built so that it could be built over the future metro hall without demolishing it - of course by rebuilding the glazing and cladding in the same way as the expanded section. It is no longer visible which part of the hall was built in 1962. ”

Although the building, built in 1962, was designed to be temporary in the first place, with future rebuilding and expansion in mind, it was still exciting and innovative that it was no coincidence that the designer received the Ybl Award in 1964. That is, not for the grandiose building with an arched façade that can be seen today, which defines the cityscape, but for the small work, which was intended to be temporary. 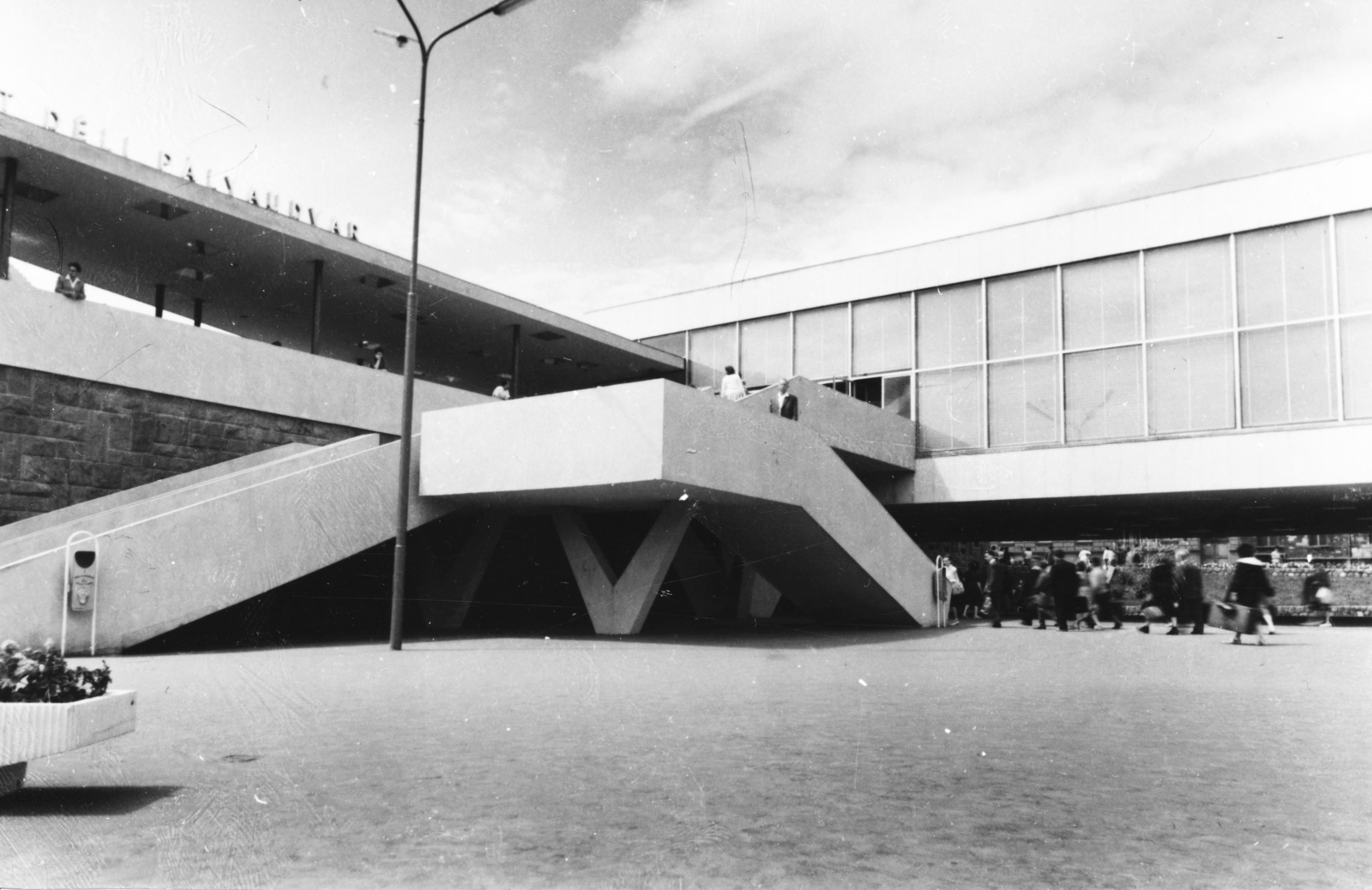 In the 5th issue of Magyar Építőművészet [Hungarian Architecture] in 1962, Ernő Heim praised the new station building as follows:

“ The structure, material and colour of the building are worthy in every term of its modern, very beautiful design. Its exterior gives a fortunate combination of concrete, stone cladding, modestly used but very beautiful marble, and aluminium and glass. Doors and windows are easy to handle and large glass surfaces are easily kept clean. The lighting is perfectly placed. Unnecessary nooks and crannies are nowhere to be found. Surely all this is a basic condition that, despite the heavy traffic in the building, we can't find garbage or scattered cigarette butts anywhere. ”

There were already large-scale plans for development at that time, many of which were realized. In the 1970s, the old admission buildings were demolished, the number of tracks increased significantly, and a new office wing was built next to the train station, as well as the metro terminus. However, many things remained just plans, the 20-storey MÁV office building was not built. 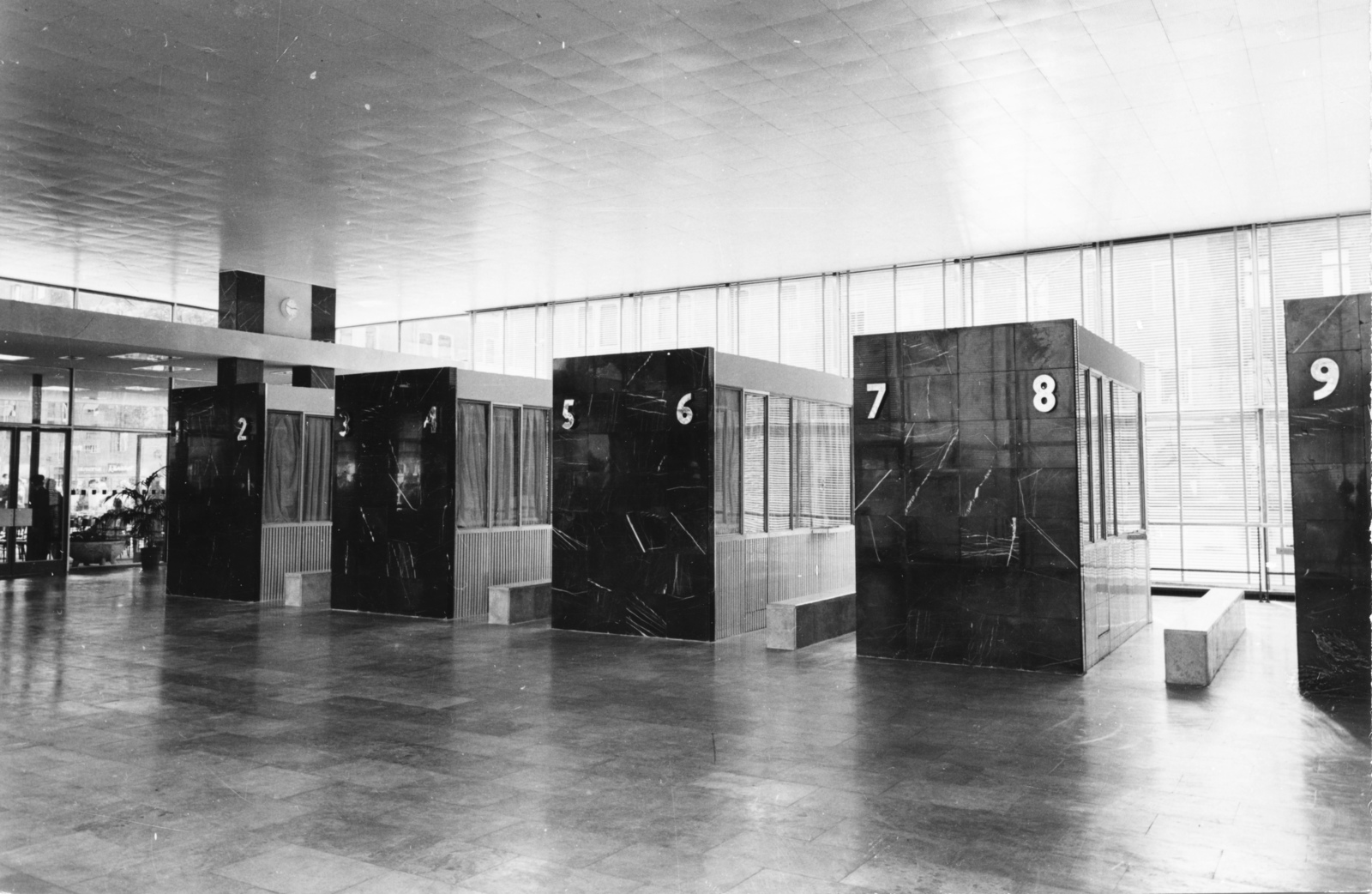 During the rebuilding in the 1970s, this award-winning building was not destroyed, it was simply rebuilt, making it part of today’s much larger Déli Railway Station.