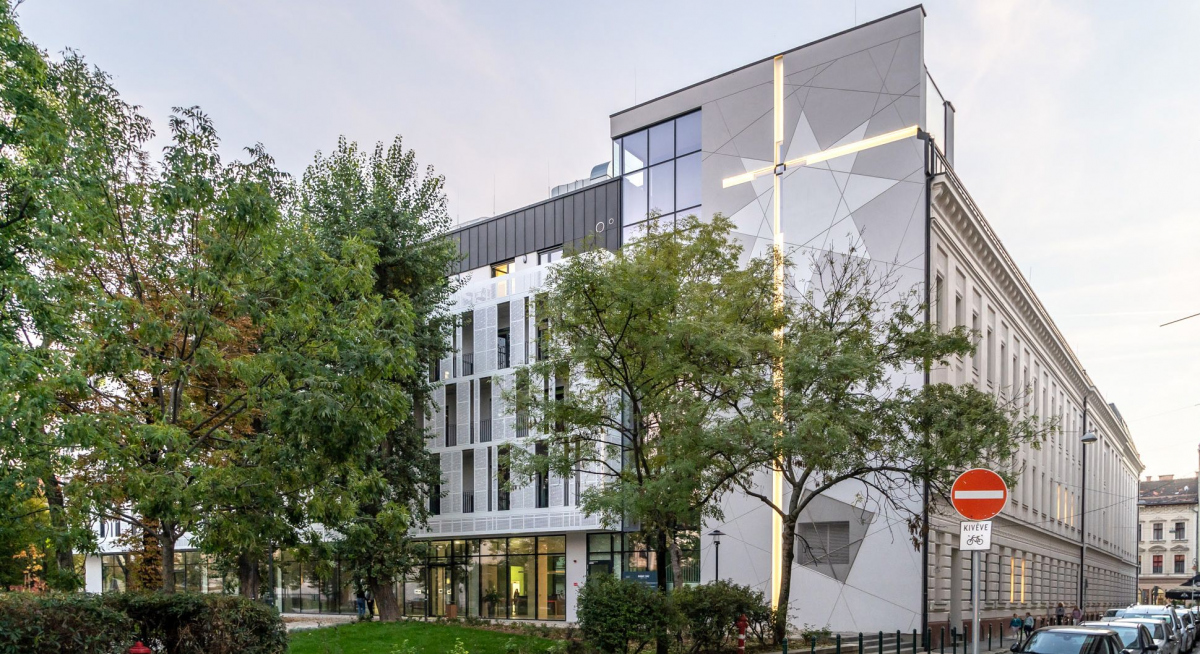 Large-scale construction had been going on in Ráday Street, and especially Markusovszky Square, in recent years, the veil has recently been lifted: the new building of the Ráday Dormitory, which burned down in early 2019, has been completed. The works also included the renovation of the original centre, so an entire block of buildings was reborn in the heart of Ferencváros. Old and new blend together harmoniously, perfectly expressing the Christian values prevailing between the walls.

The three buildings of the Dunamellék Reformed Church District form a U-shaped block in the area bounded by Ráday Street, Köztelek Street, and Markusovszky Square. A residential house – not belonging to the church – is connected to these from Biblia Street, so the wings surround a rectangular inner courtyard. The Bishop's Office of the church district has been located on Ráday Street since 1912, the building on Köztelek Street is used by the Faculty of Theology of the Károli Gáspár University of the Reformed Church, while on the Markusovszky Square side is the Ráday Higher Education Student Home, built on the site of the burned down dormitory. The entire building complex was named Ráday House, as its official address is 28 Ráday Street. Nevertheless, Markusovszky Square is the biggest winner of the investment, as a completely new part of the building was created here. We also entered the building here, in which Deputy Bishop Péter Somogyi guided us through.

Nearly four years have passed since the fire and crazy years have come, and crises raged in all areas of life. But the firm faith typical of the Reformed was shown in an exemplary way this time as well: they got together and built a fantastic building on the ruins. They have not forgotten the past, not in any sense: learning from the tragedy, they built a professional fire alarm and extinguishing system, and in general, the building complex is characterised by the most modern technology. Another aspect of the past is represented by the old building on Ráday Street, which stood before them as a benchmark: following its white facade, the architect Zoltán Berzsák covered the walls facing the square with white metal sheets, which are interrupted by openings in a changing rhythm. The choice of colour can not be a coincidence either, he also revived the Reformed traditions, as it also expresses simplicity in the denomination's churches. 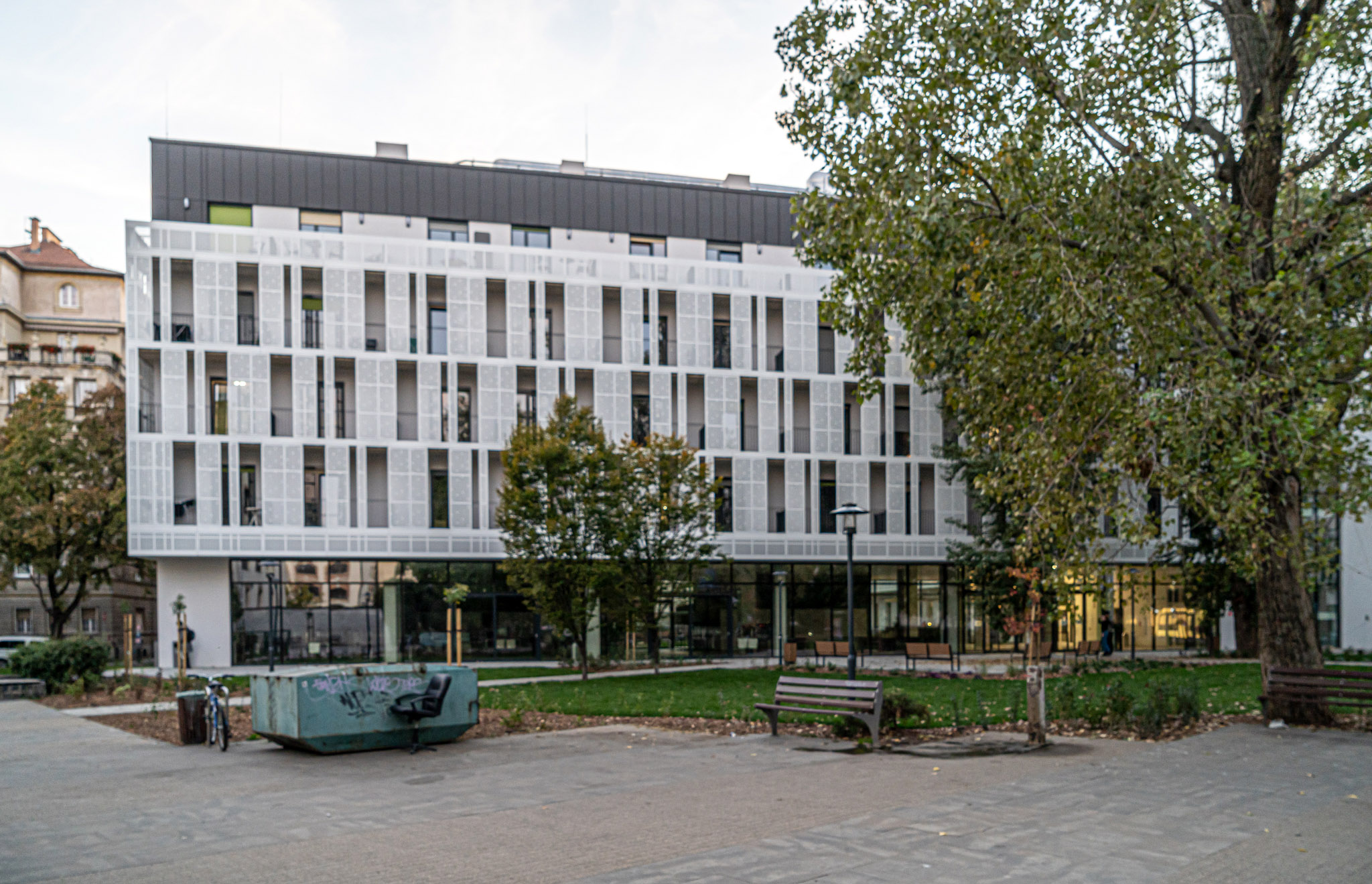 Keeping the past in mind, however, did not exclude compliance with modern taste: the metal sheets are frequently pierced with holes, behind which large glass surfaces are stretched, according to the fashionable method of today. On the right edge of the facade facing Köztelek Street, the grey base colour dominates, but only so that the huge, off-white star (referring to the one in Bethlehem) and the even larger white cross - lit up with LED light in the evenings - are more prominent. The new façade, therefore, leaves no doubt that the spaces behind it serve ecclesiastical purposes. 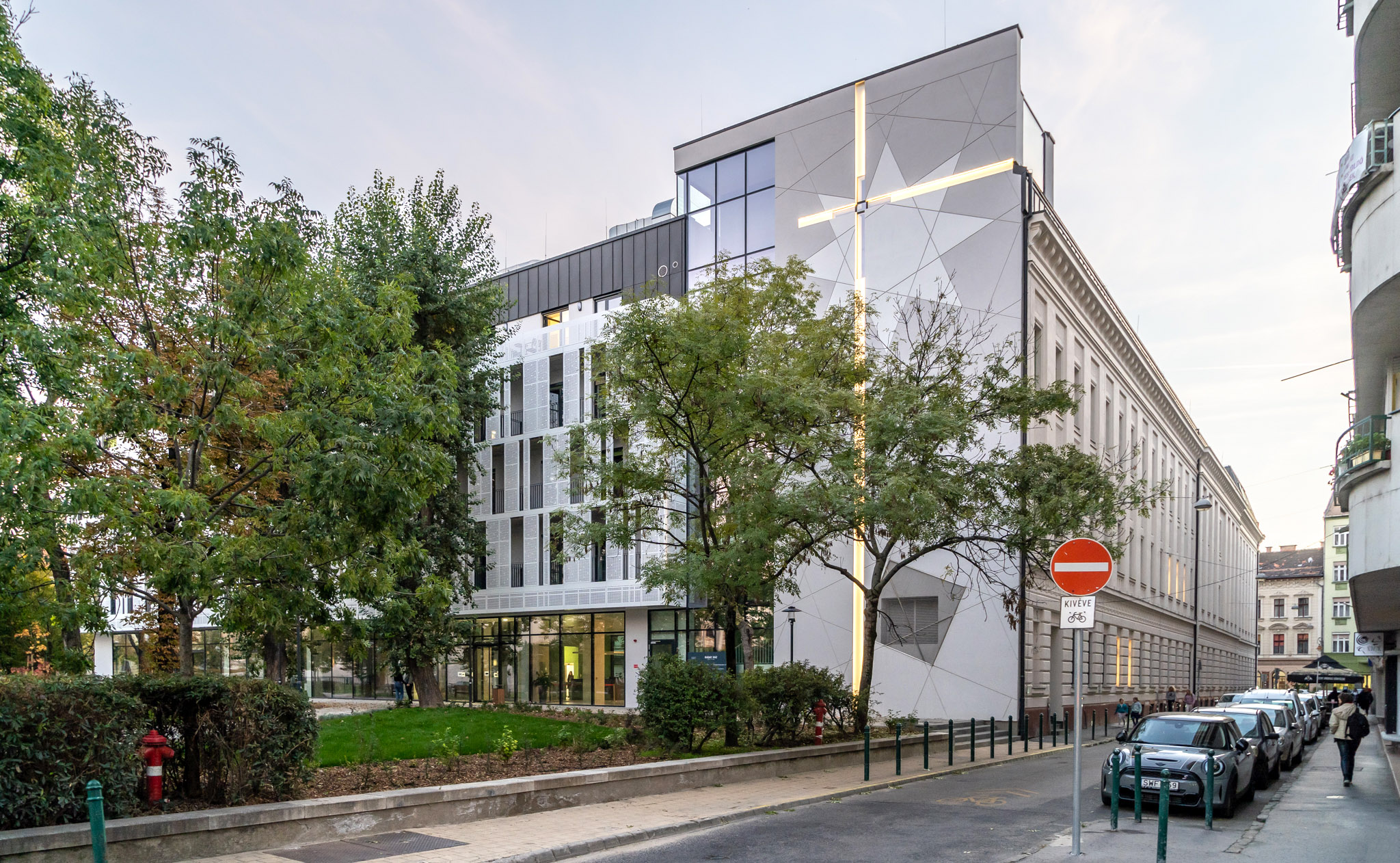 The main entrance was also moved to the square from Ráday Street, which may also have a symbolic meaning: the future has the main role. We enter the hall through a photocell glass door, in the middle of which the reception desk is placed, and comfortable armchairs are provided for those waiting. Most of the new building is occupied by the Ráday Higher Education Student Home, ninety-six students were able to move in this academic year, most of them studying at the Faculty of Theology of the Károli Gáspár University of the Reformed Church. 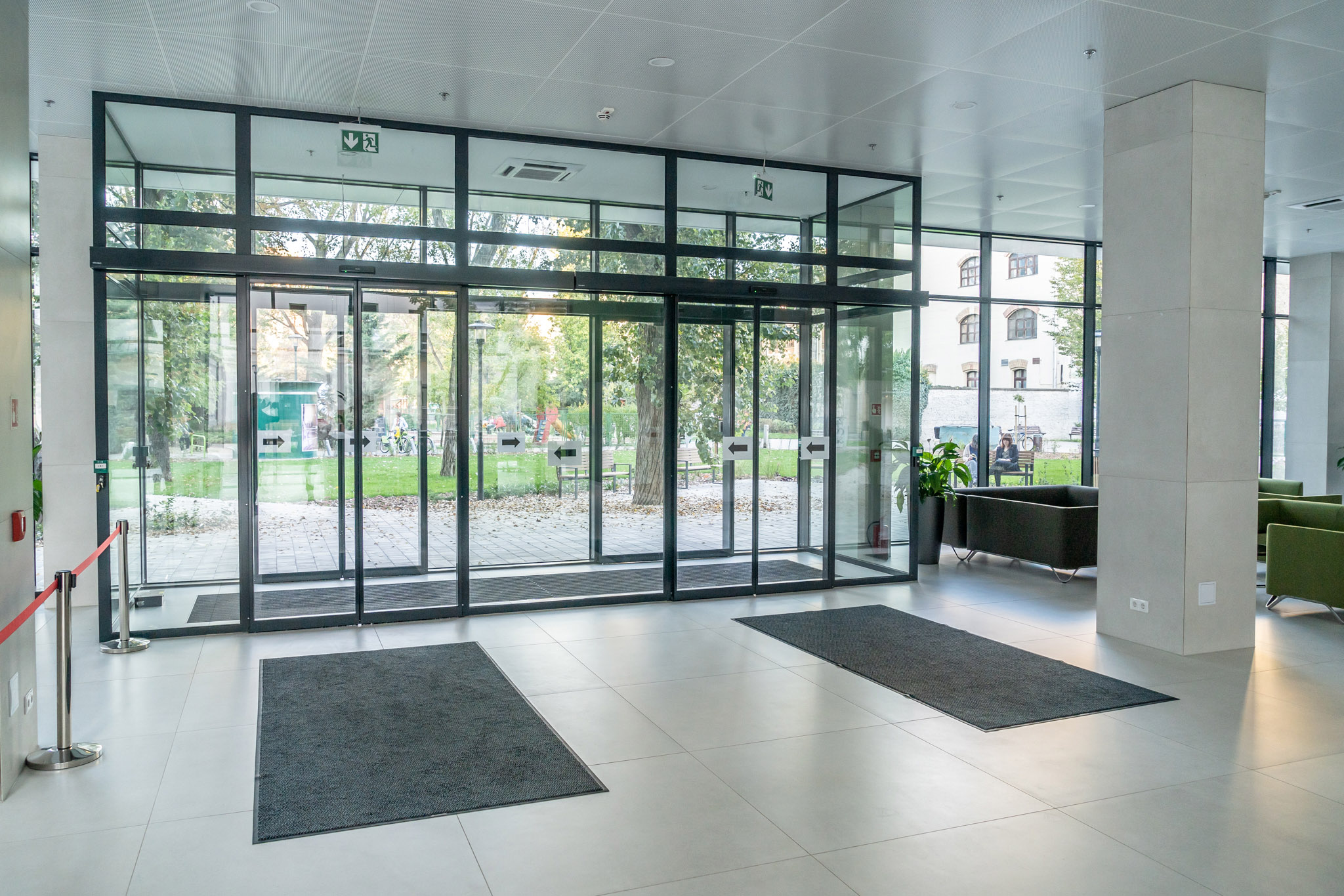 Although the double rooms with their modern equipment can provide really splendid conditions for young people, they also need social spaces. The hall also fulfils this need, but this is even more true for the restaurant to the left. Physically, only those who live and work in the building can be present here, but – as we learned from the Deputy Bishop – the congregations of the eight dioceses of the Dunamellék Reformed Church District are also symbolically on the wall: those that supported the construction of Ráday House with their donations. In the middle of the list that fills the entire wall, a biblical quote proclaims the common values and expresses the faithful's gratitude to God: "Praise the Lord, my soul, and forget not all his benefits!" (Psalms 103:2) 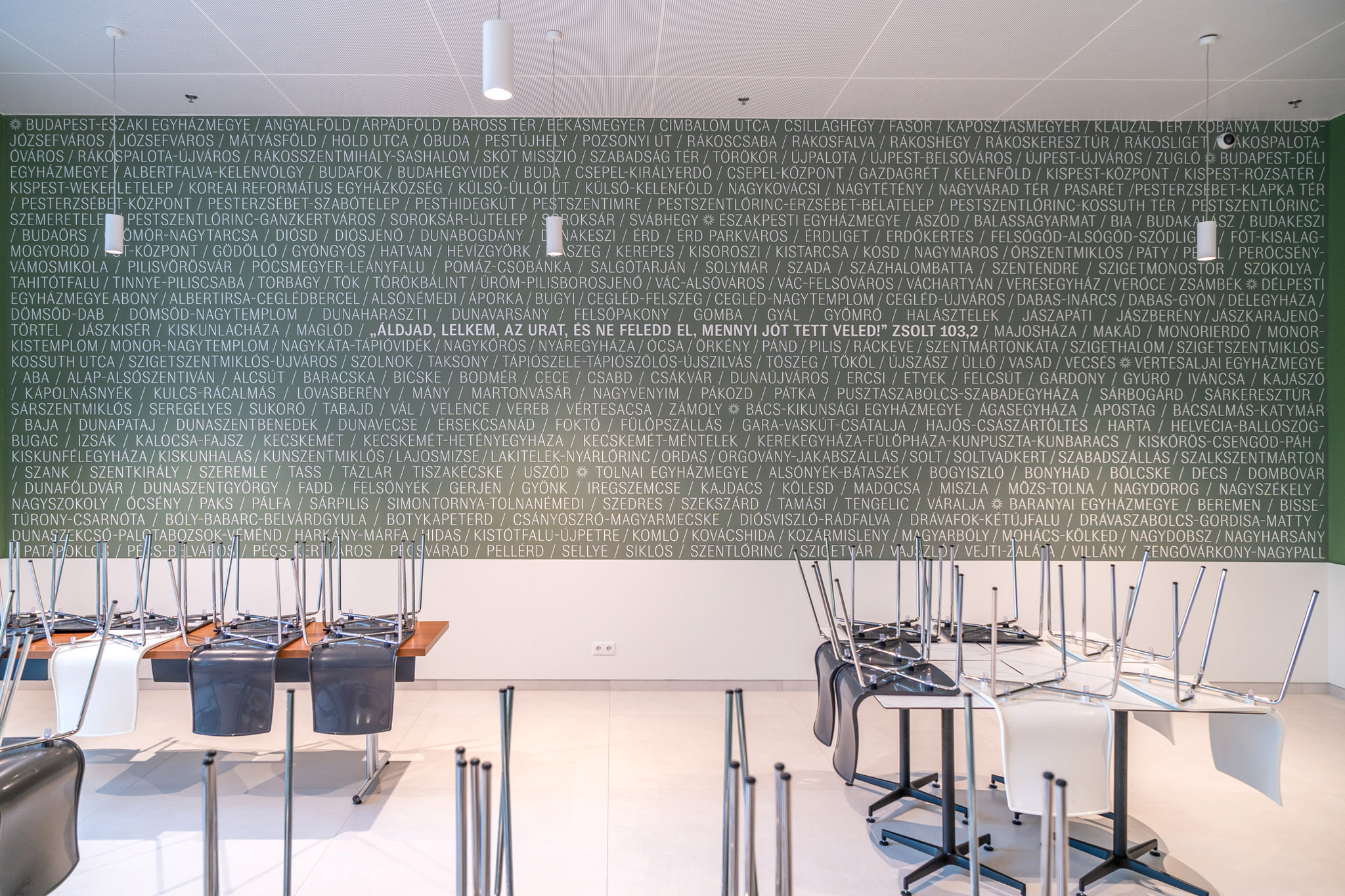 The names of the churches providing assistance are lined up on the restaurant wall (Photo: Balázs Both/pestbuda.hu)

Many beautiful parts of the Holy Scriptures still appear on the walls, in the space opposite the main entrance - and reaching all the way to the roof - parts were taken from the Epistle to the Galatians. In accordance with the vertical accented space, the letters can be read arranged one below the other. This soaring part of the hall is lit by candles-like lamps hanging from the ceiling. Although they are really only needed in the dark, as the entire building is permeated with natural light, which was also the basic concept of the renovation: “Let there be light,” (Genesis 1:3). 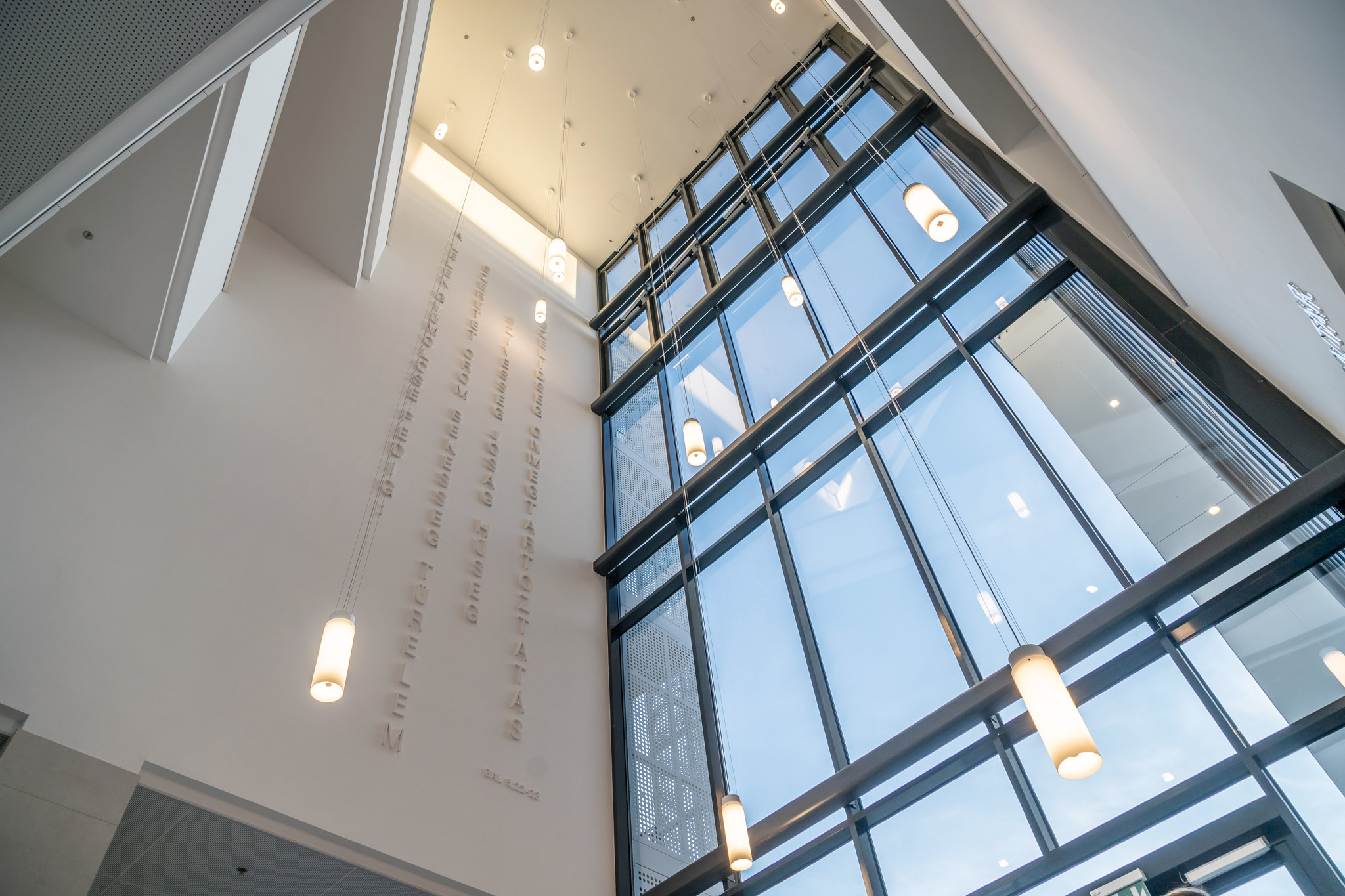 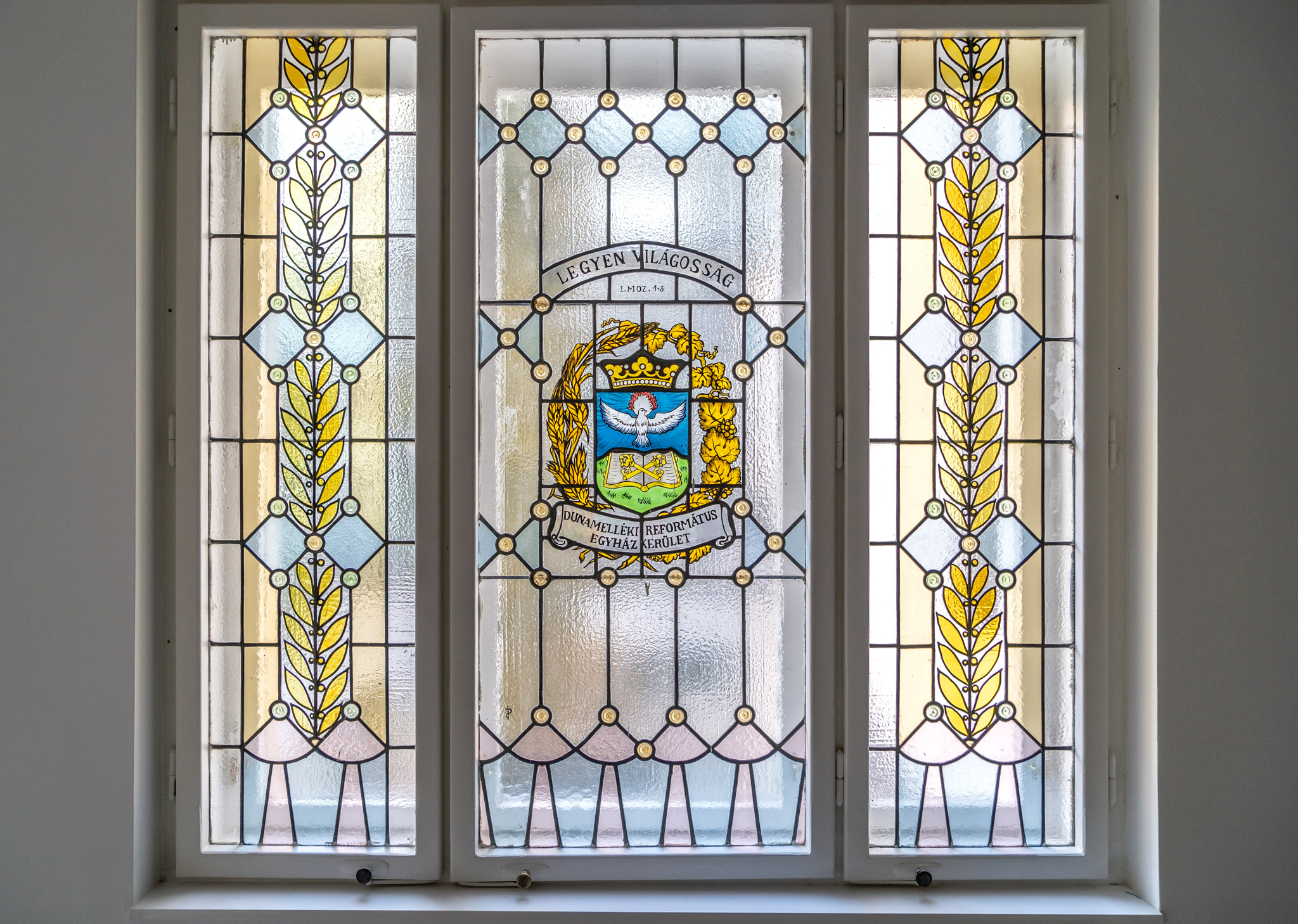 The well-known passage from the first book of Moses was already on one of the coloured glass windows of the old wing on Ráday Street at the beginning of the 20th century. During the current renovation and reconstruction, thanks to the large glass surfaces, the building is truly flooded with light. The facade of the old building on Ráday Street was not changed, but the previously closed doorway was opened, making it brighter and, of course, traffic became easier. The yard, which was previously used as a parking lot, has also become a community space, with a well-kept lawn and benches. Only the driveway of the underground garage reveals that there were once cars there. By the way, the entrance to the underground garage is from Biblia Street, although if necessary it is also possible through the Ráday Street gate. 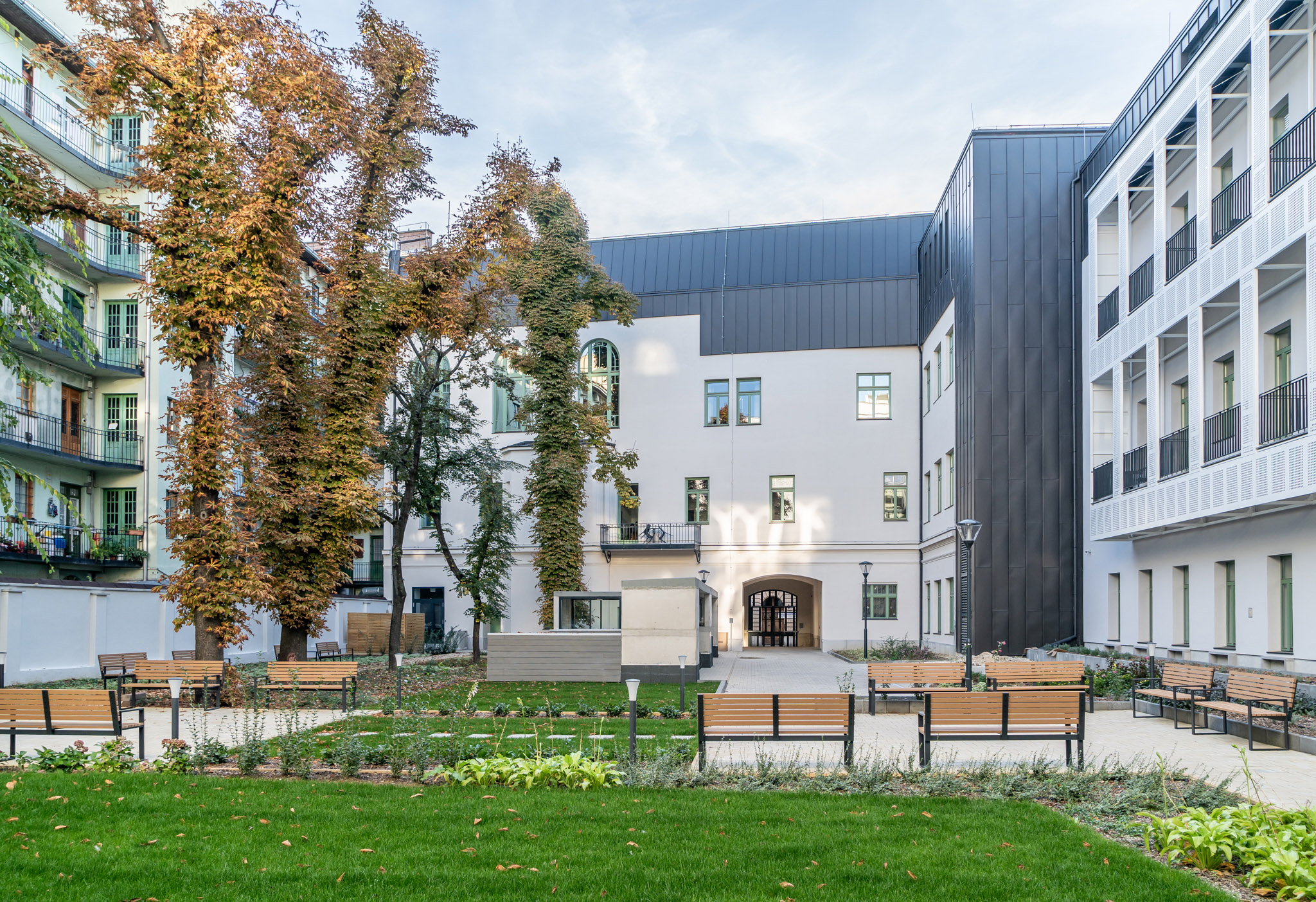 The courtyard was transformed into a community space (Photo: Balázs Both/pestbuda.hu)

From the Markusovszky Square wing, we then went to Köztelek Street. Thanks to the large glass surfaces, the light penetrates the staircase here and even enters the corridors. Incidentally, this is the education wing, with the famous Ráday Library on the ground floor, the Pál Török Library used by students on the top floor, and classrooms on the levels in between. This wing forms a transition between the completely new Markusovszky Square part of the building and the renovated Ráday Street tract: its main walls and facade have been preserved, but the interior is new. Biblical quotations can be read on the walls, which radiate purity but are also in line with modern taste, and the church background is also expressed by the fact that the individual rooms bear the names of famous theologians. 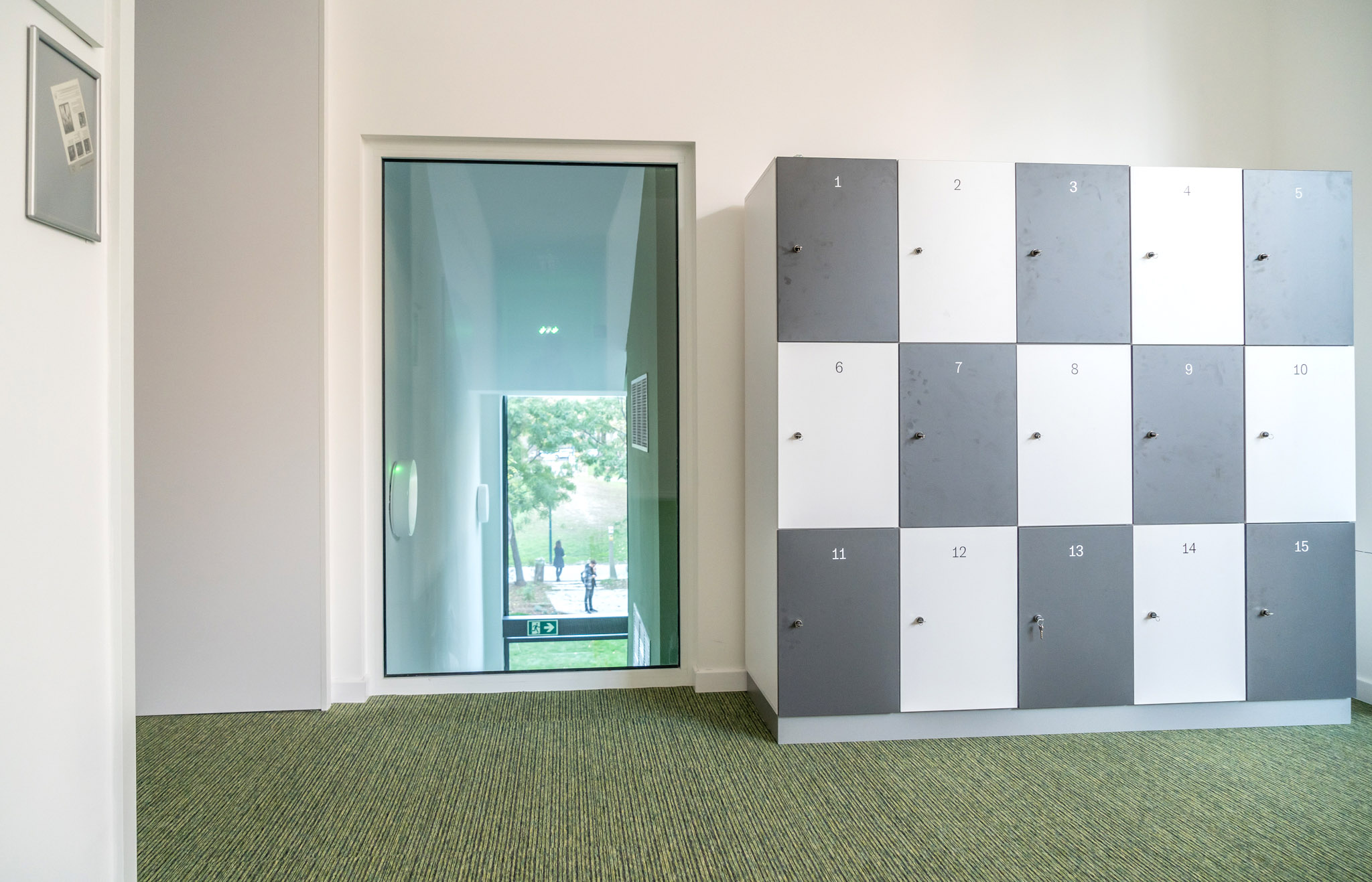 The square can be seen from the corridor in front of the classrooms (Photo: Balázs Both/pestbuda.hu)

A chapel was also installed on the top floor, at the end of which a cross-shaped window opens in such a way that it coincides with the huge, LED cross mentioned above. A light-coloured cross decorates the black surface of the communion table and the reading desk - the latter creates the effect of burnt wood, thus reflecting the fire. When we visited the chapel, the sound of the organ playing filtered in because the organ was installed in the adjacent room, in which the students can practice. 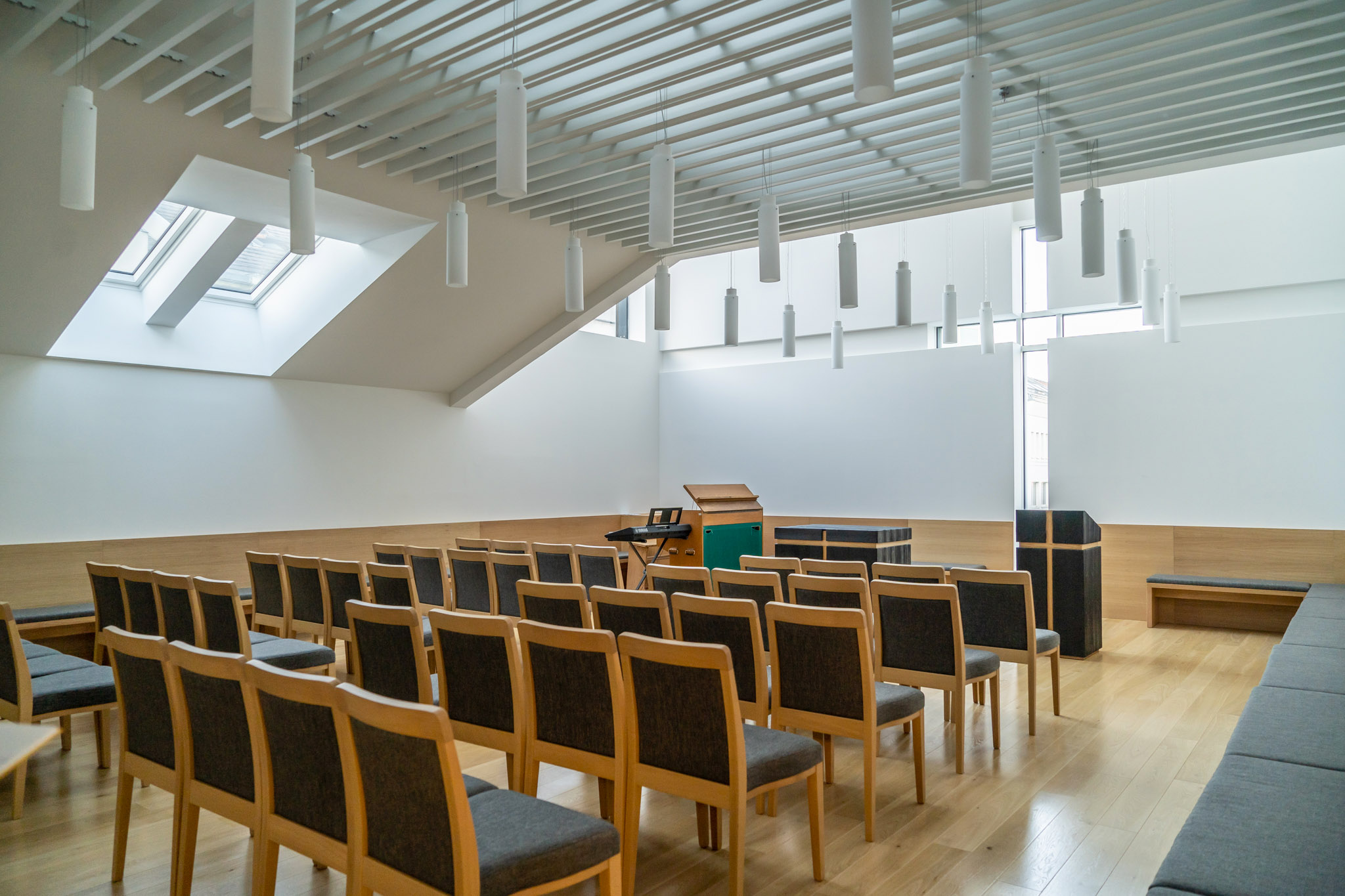 The window of the chapel forms a cross (Photo: Balázs Both/pestbuda.hu)

After that, we were treated to new visual experiences, as we had the opportunity to go up to the roof terrace. Here, on one side, the futuristic machines of the building's heat pump heating system were lined up in military order, and on the other side, there was a common space with a magnificent view of Gellért Hill. Unwittingly, we also saw the old tiled roofs of the neighbouring residential houses, which enhanced the value of the brand-new building even more. 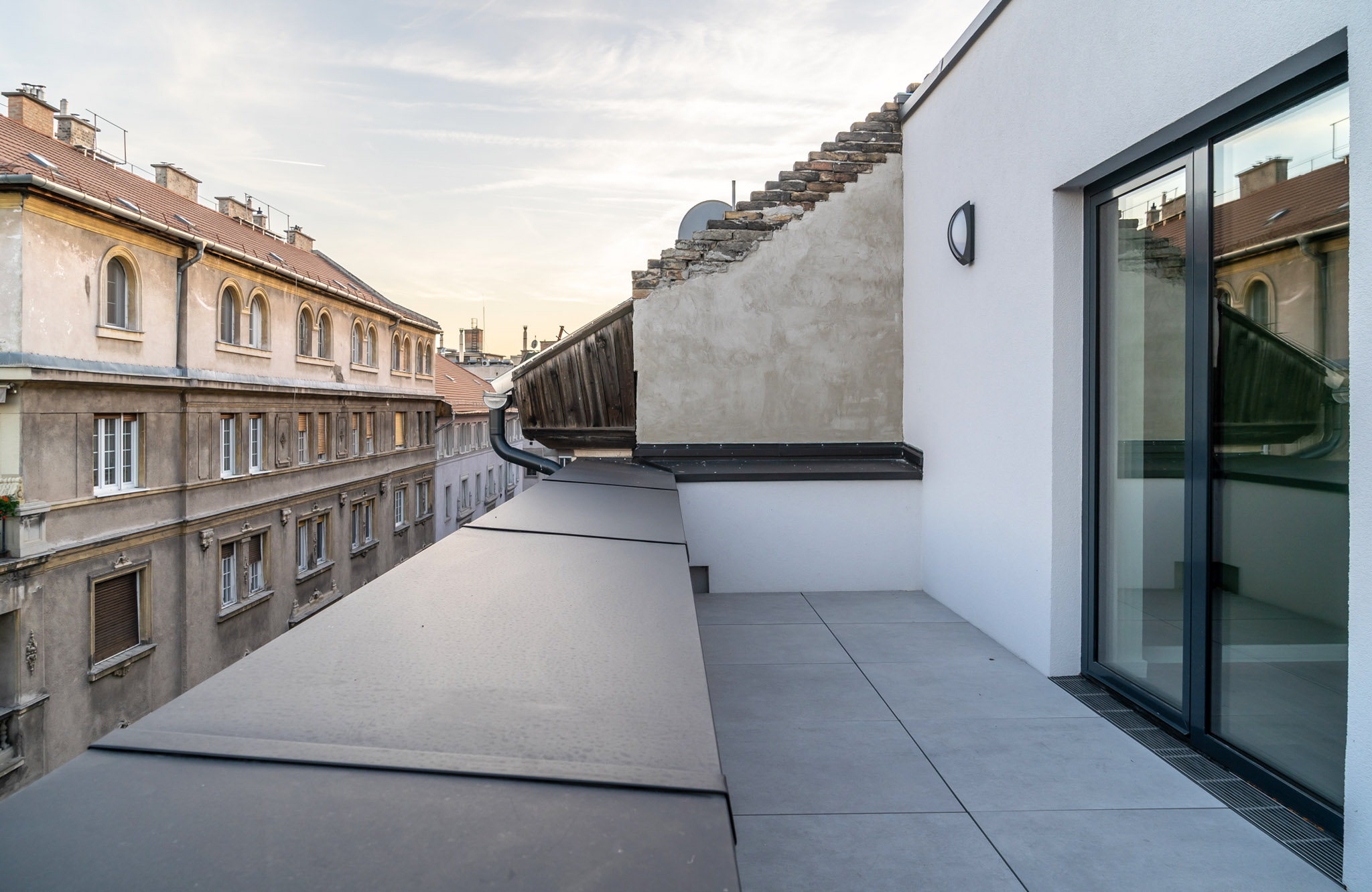 The meeting of the old and new on the roof terrace (Photo: Balázs Both/pestbuda.hu)

Not so long ago, by the way, the roof of the Ráday Street wing was also like this; We also learned from Péter Somogyi that the church district was seriously considering the idea of renovation even before the fire. This building - which was the last stop of our tour - was built at the beginning of the 20th century and has not been spared by the ravages of time. It received a new tin roof, which, however, is not visible from the street. The only changes to its facade were that the decorations removed during the last renovation in the 1980s were replaced. The interior was also modernised with great care: above the decorative staircase, a large-diameter, white ring lamp was hung, which emits light almost like a halo. 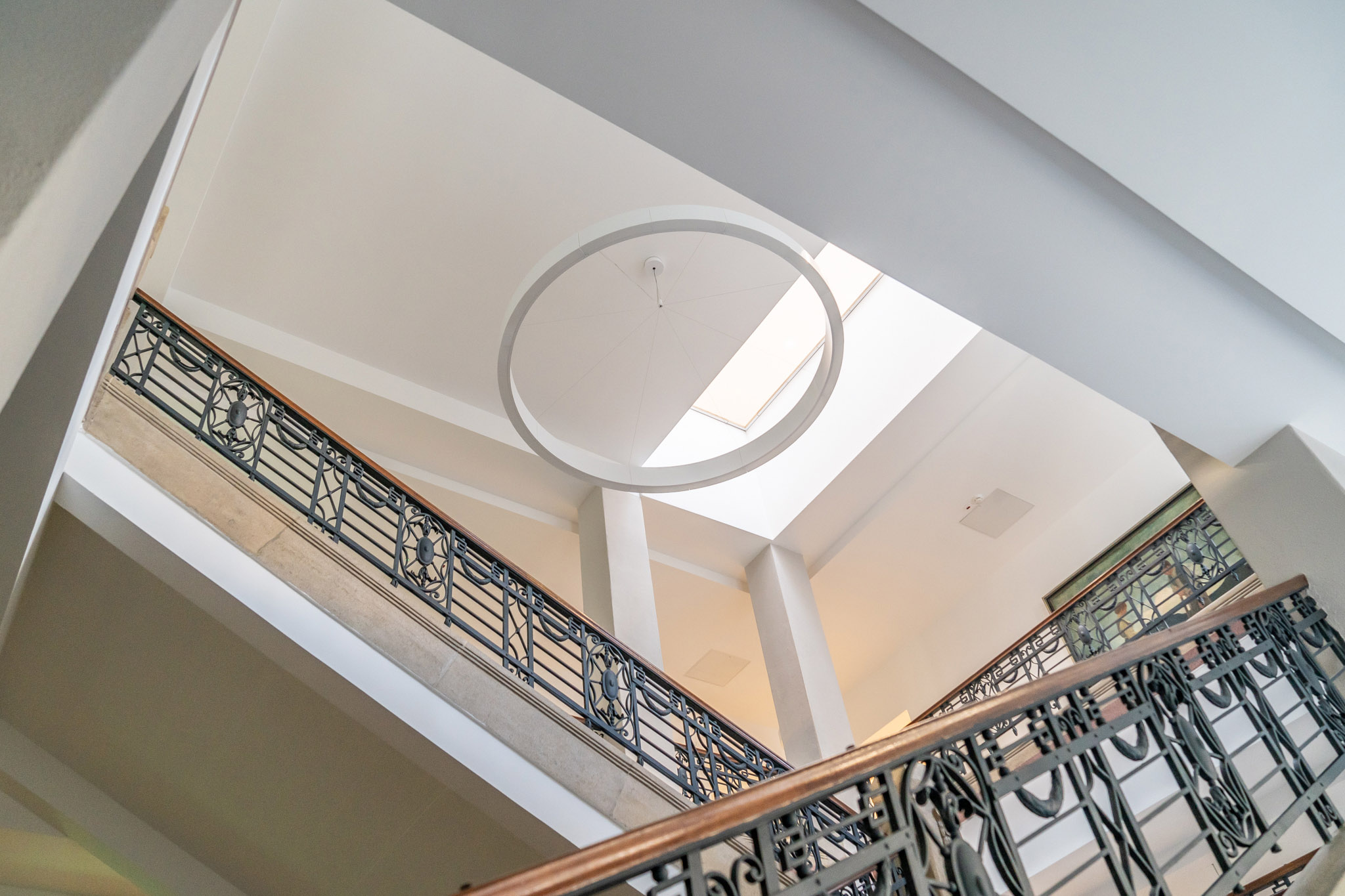 The staircase is illuminated from above by a large lamp (Photo: Balázs Both/pestbuda.hu)

The renovation of the meeting room of the office was also very successful, where the false ceiling represents the new - also with circular lamps - while the equipment is old, referring to the building's more than one hundred years. Most of the furniture is actually only aftermarket, but very valuable, real works of art hang on the walls: the painted ceiling cassettes of the Reformed church of Tök village, which were made in 1740, but have been kept in a museum for a long time. 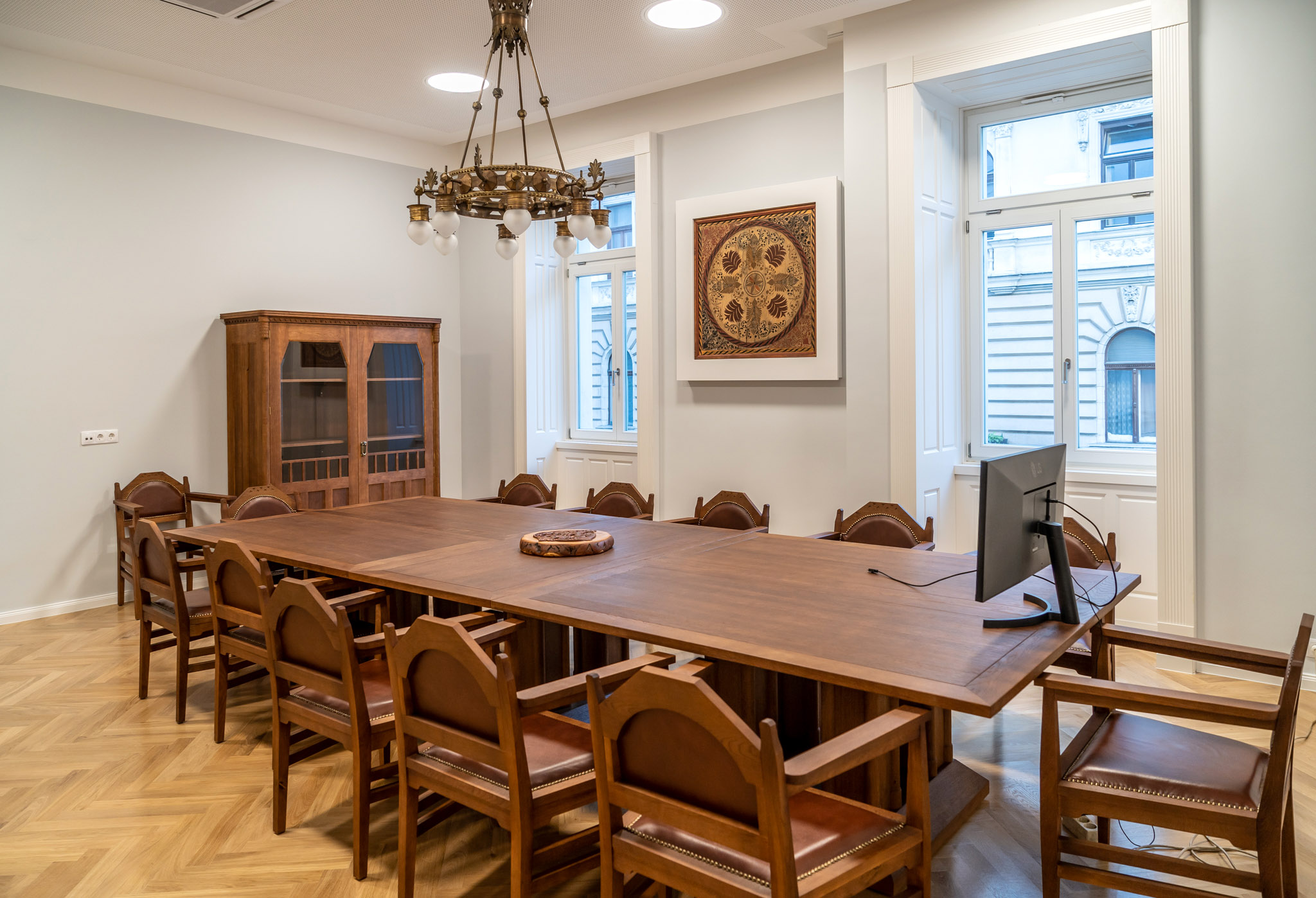 During our walk around the building, we went from the brand new, 21st-century wing to the 18th century. The building complex is indeed characterised by large temporal distances, but the past and the present (and the future) meet and blend together in an exemplary manner. As a devout Reformed, Zoltán Berzsák knew exactly how to create something that suited the spirit of the place, but of course, he also consulted with the leaders of the Bishopric. The quotes on the walls are also the result of consensus - among them (in our opinion) the most beautiful and also the largest one comes from the aforementioned letter to the Galatians: "But the fruit of the Spirit is love, joy, peace, forbearance, kindness, goodness, faithfulness, gentleness and self-control." (Galatians 5:22-23)