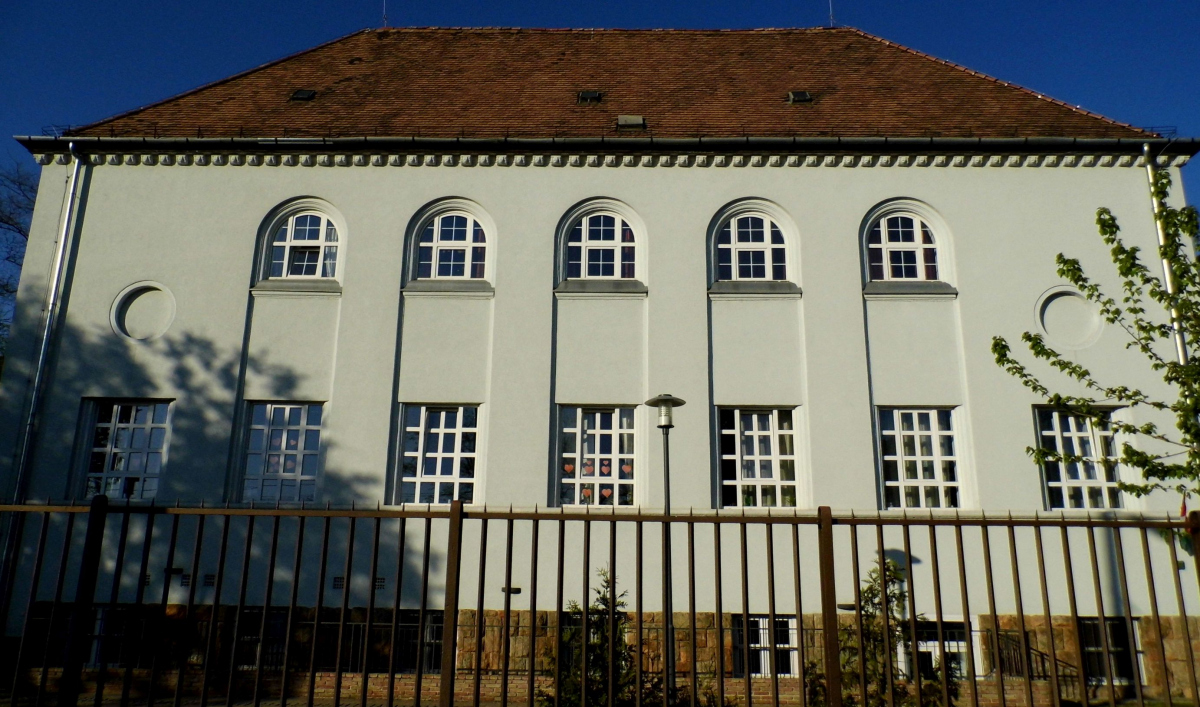 Hermina Road, which marks the eastern border of City Park, is primarily known for its churches: the Hermine Chapel, which also gives its name, and the Church of the Immaculate Conception on the corner of Ajtósi Dürer Way. However, between the two hides a lower, yet dignified-looking building, which was originally built by the Franciscan Missionaries of Mary and handed over ninety-five years ago.

The Society of the Franciscan Missionaries of Mary (who are usually called the White Nuns for short) was founded by Helena Maria Filippina de Chappotin de Neuville, a nun of French origin, in India and their operation was approved by Pope Pius IX in 1877. As a result of their missionary purpose, they cover almost the entire world; They came to Hungary in 1899 and performed charitable tasks mainly among the population. In 1902, on the eastern edge of the City Park, next to the recently presented Hermine Chapel, they bought a residential house where they opened a nursery and kindergarten for children and ran a soup kitchen for the poor and elderly. 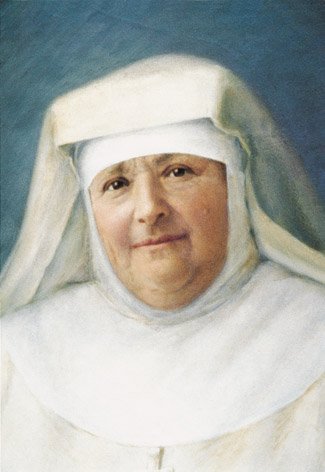 The founder of the order of the White Nuns was called by her monastic name Marie de la Passion (Source: en.wikipedia.org)

Their role was appreciated after World War I - like that of churches in general - because they were able to give people faith and hope for survival in the difficult socio-economic situation following the tragedy of Trianon. The White Nuns decided to build both an orphanage and a church, and Jenő Lechner was entrusted with the design.

At that time, he was already considered an accomplished architect, for example in December 1916, at the coronation of Charles IV, he designed the ceremonial decorations of the Church of the Blessed Virgin Mary. Thanks to his talent and connections, he received commissions for the design of new buildings and the restoration of monuments even during the stagnation after World War I. He began the task received from the Nuns in 1924, and since the clients were still very ambitious at that time, he designed a large-scale building complex, the four wings of which shared a spacious inner courtyard. He placed the orphanage in the northern tract and the church in the southern tract, but he connected them both from the Hermina Road and on the back side with sophisticated, Neo-Romanesque facades. 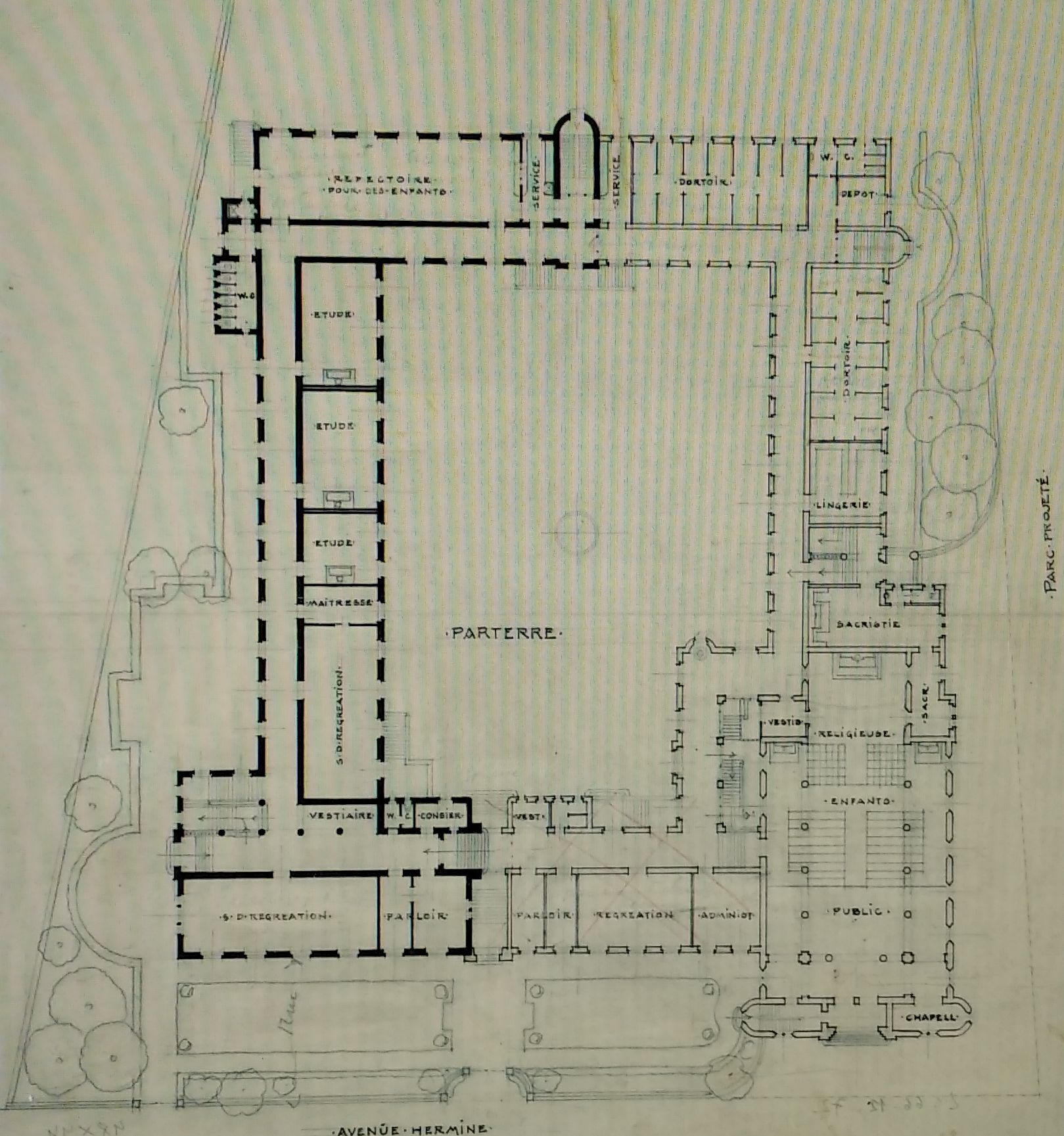 The style is represented on the very first plans by windows with semi-circular closures and steeply pitched high roofs, but on the church, a large round window can also be seen with a low tower next to it. He envisioned two layouts for the church: in one, the nave is parallel to Hermina Road, and the entrance thus leads into the transept. On the other, the three-nave part is perpendicular to the road, and its entrance opens on the axis of the main nave. In these drawings, the floor plan of the orphanage looks like an inverted T, the head of which faces Hermina Road, and the longer leg of which extends deep into the interior of the plot.

In the initial plans, the orphanage and the church would have been connected (Source: Budapest History Museum Kiscelli Museum)

However, the large-scale plans soon had to be greatly reduced, because sufficient financial resources were only available for the building with the T floor plan. Lechner designed its entrance at the end of the shorter wing, which is accessed by several steps, as there is also a basement under the entire block. A corridor opens from the vestibule behind the entrance, on the left side of which is the main community room (parlour), and two guest rooms have been furnished next to it. From the staircase at the end of the corridor, the basement and the first floor can be reached - most of the former is occupied by the sisters' dining room, and the latter is the largest dormitory for the orphans. In the longer wing of the T, there is also a corridor, from which rooms with different functions open to the right: on the ground floor there is a large dining room, and at the end of the wing there are classrooms, and on the first floor there are long bedrooms. 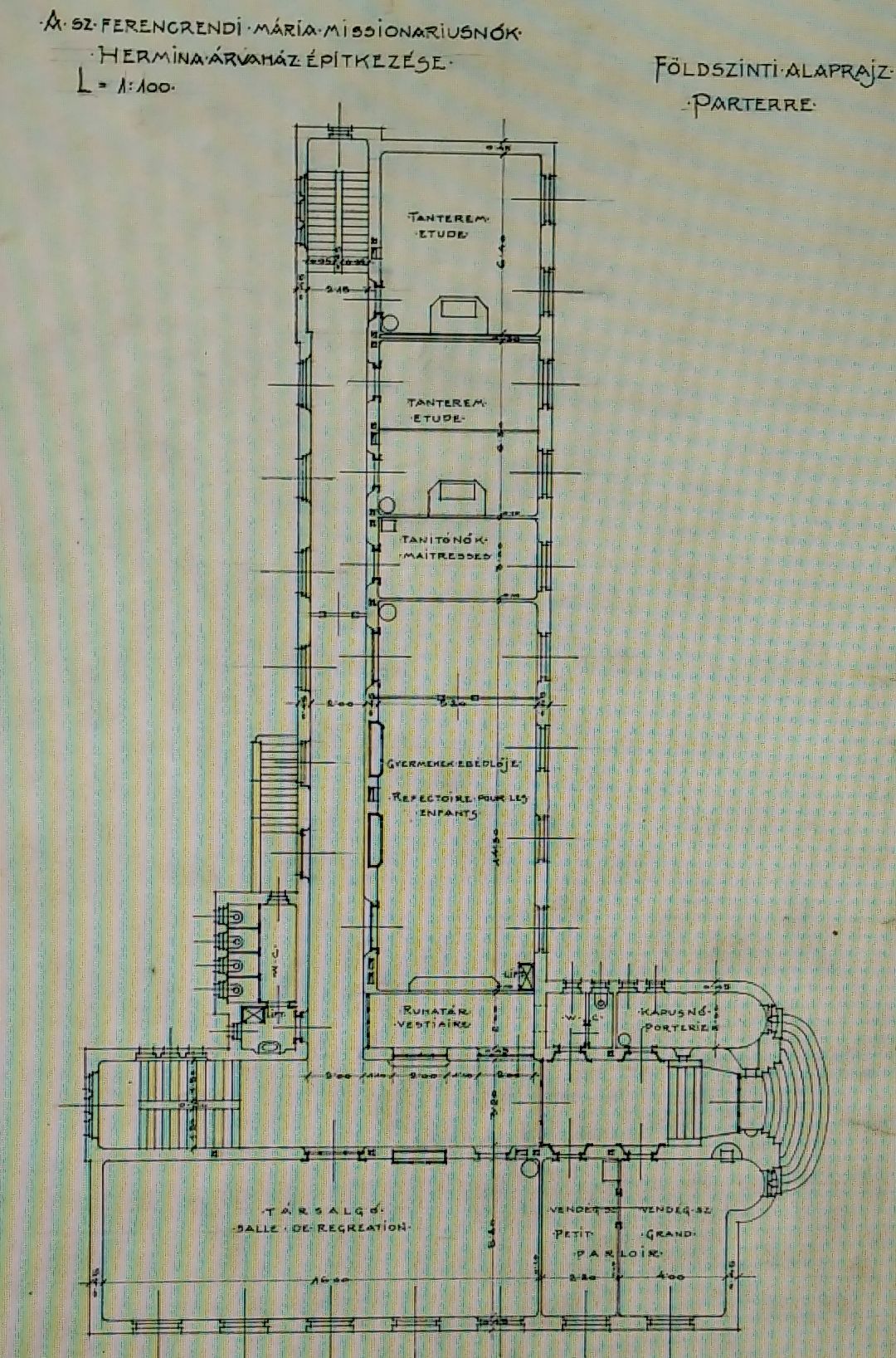 The ground floor plan of the orphanage has the shape of an inverted T (Source: Kiscelli Museum of Budapest History Museum)

However, the relatively simple floor plan also contains more varied and busy parts, especially around the entrance. It is surrounded by two protrusions that step forward in a semi-circular arc, on the left it has a storey, but on the right, it has only a ground floor. A terrace was created on the top of the latter, which offers a nice view of the well-kept yard. The gate structure itself is exciting, but it was even more so in the original plans: its curved-sided, steep roof is reminiscent of the gate towers of Renaissance castles in Upper Hungary. This part of the country is even more clearly referred to by the pointed crenellations at the corners, since in the 16th-17th centuries -  especially in the counties of Szepes and Sáros - a characteristic, crenellated construction method spread. 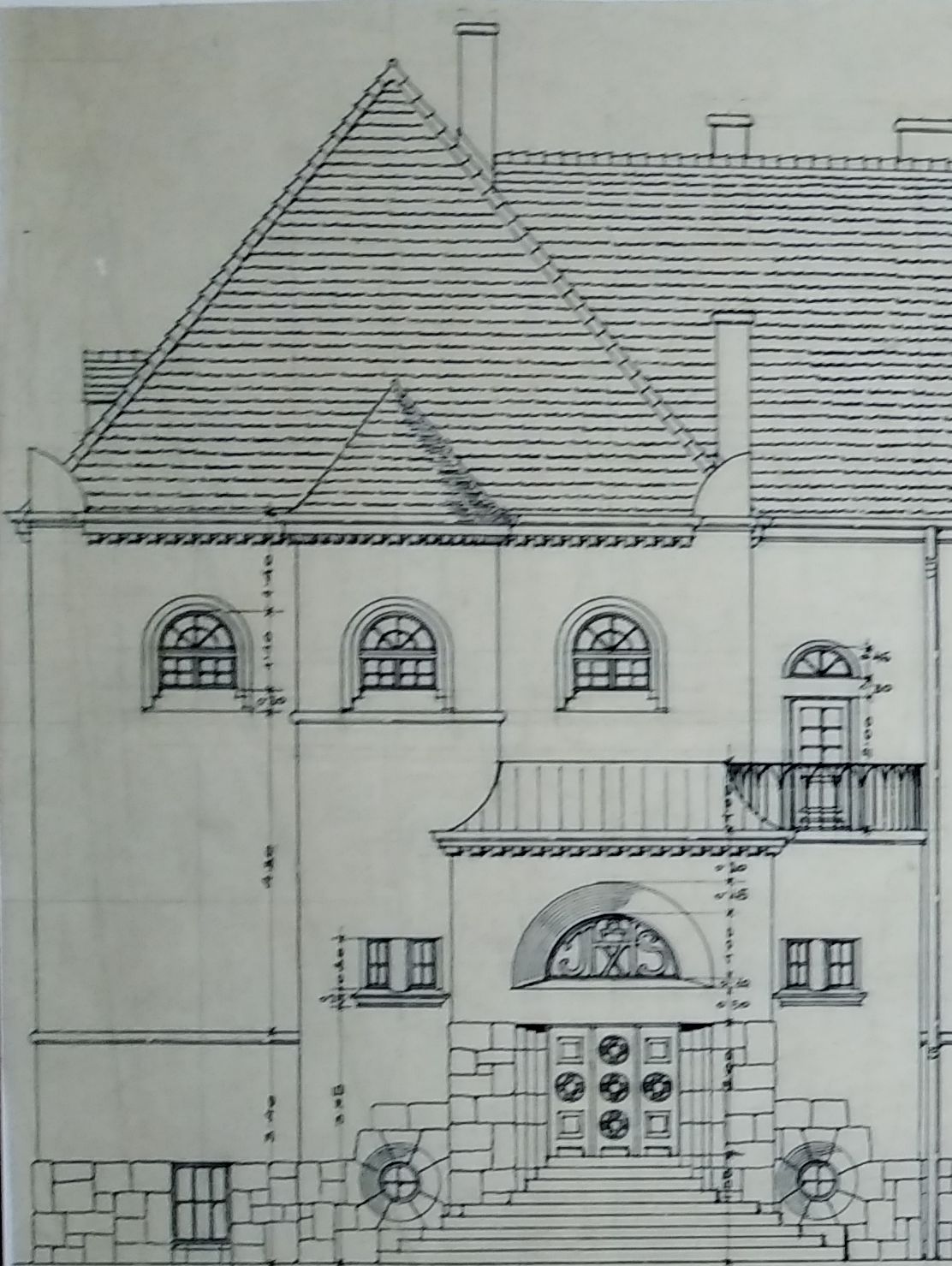 The roof of the orphanage's gate and the crenellations placed on the corners also refer to the Renaissance of Upper Hungary (Source: Kiscelli Museum of the Budapest History Museum)

Before World War I, he designed several buildings in which the crenellated Renaissance appeared to a greater extent, although he tried to further develop its features. Like his uncle, Ödön Lechner, he strove to create the Hungarian architectural design, for which, in his opinion, this style provided the best foundation. On the other hand, the conservative cultural policy that occurred after the Treaty of Trianon did not take kindly to Hungarian stylistic aspirations either, so Lechner also had to hide subtle references in the details. In the end, however, neither the roof of the gate nor the crenellations could be placed on the building, so only the so-called Hungarian knots [vitézkötés in Hungarian] of the railings of the staircase express the Hungarian intentions of the designer. This motif comes from folk art, it was also used on the uniforms of the hussars, from where it got its name. 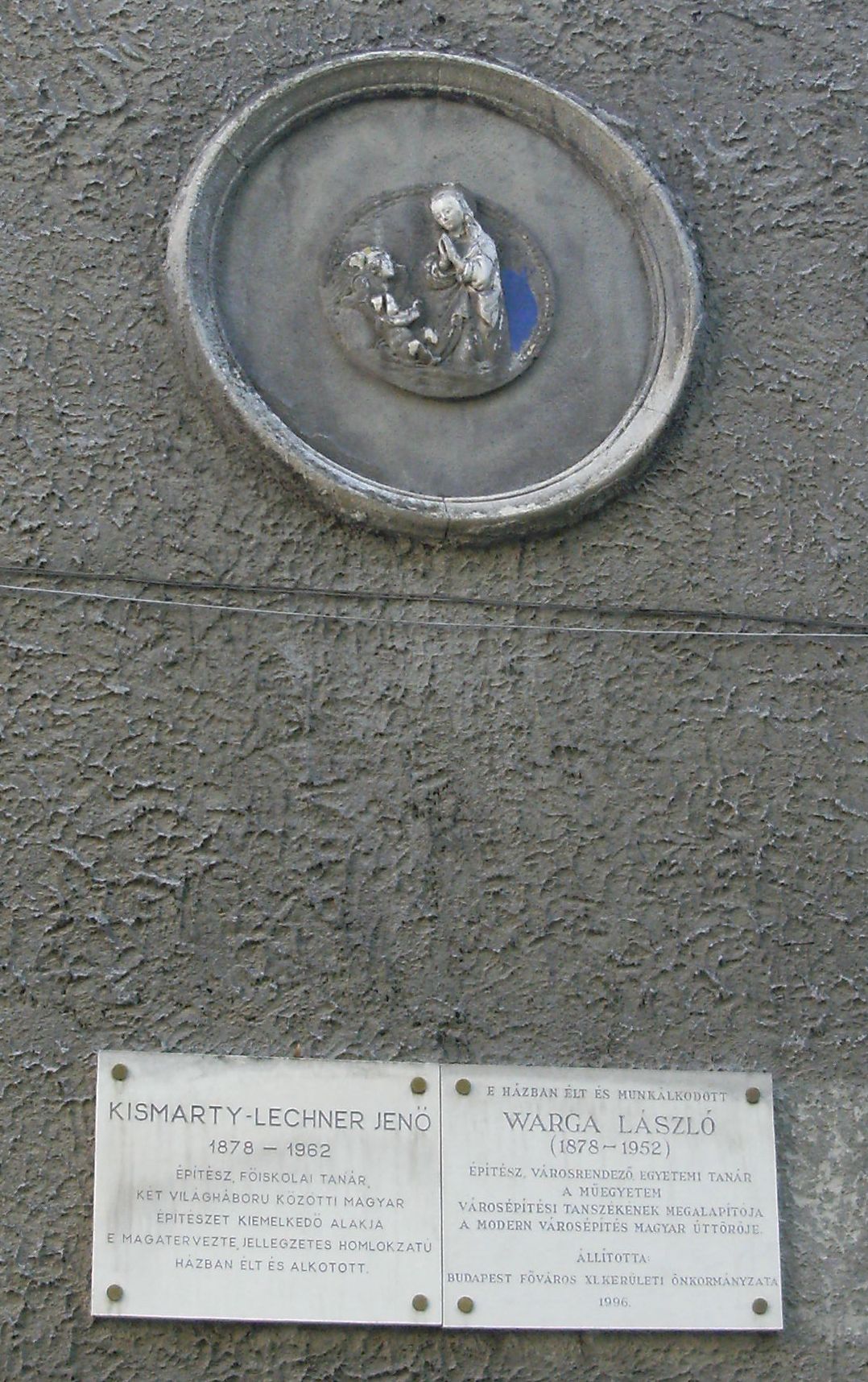 By the way, Jenő Lechner was a devout Catholic and considered it important that religion be reflected in the exterior: he placed reliefs of Mary and Jesus on several of his completely profane residential buildings. In 7 Kis János (today László Németh) Street in the 6th District (1908–1909) in the arched field under the balcony, Mary holds the baby Jesus in her arms, and under 4 Mészöly Street in the 11th District (1909–1910) - which was his own apartment building - depicted the scene of the birth of baby Jesus in a circular relief. Similar circular reliefs decorate the facade of the villa facing the Vienna Gate in the 1st District (1921), although they do not specifically depict a religious theme, only a happy family life (works by János Pásztor). On both sides of the main facade of the Hermina Road orphanage, circular sunken spaces can be seen, which are empty today, but according to the plans, Lechner wanted to fit reliefs into them as well.

The orphanage and the church would have been connected by a wing (Source: Budapest History Museum Kiscelli Museum)

From the initial large-scale plans, only the orphanage was realised as the first step, which was consecrated on 29 October 1927 by the papal nuncio Cesare Orsenigo (the ambassador representing the person of the Holy Father). Fortunately, the White Nuns did not give up their ideas and it did not take ten years before the church was completed, also according to Jenő Lechner's plans. In the plans drawn up in 1935, the idea of connecting the buildings was still alive, but only from the Hermina Road side. The connecting wing would have continued the facade rhythm of the orphanage and the common entrance of the building complex would have been located here. At that time, even the church showed Neo-Romanesque features. However, the financial situation of the Order did not allow the full implementation of these plans, so only the church was built in 1937. The orphanage - in which kindergarten and school education took place - could operate until 1950. At the beginning of the communist dictatorship, the monastic order was dissolved, and the Hungarian Working People's Party opened a school in the building. After the 1956 revolution, the State Institute for the Blind moved into the walls left empty due to the dissolution of the party. In 1965, another wing was added to the building, which extends towards the church but does not reach there. Their connection is no longer timely because, after the change of regime, the White Nuns only got the church back, the former orphanage is still used by the State Institute for the Blind.