Three US Presidents remembered in Budapest 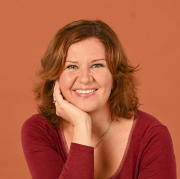 The United States is electing a new president. As the world follows events across the Atlantic, take a stroll through the US-related buildings and monuments in Budapest.

From the second half of the 1880s onwards, thousands of Hungarians travelled to the US searching for a better life. Hungarians that had settled in Cleveland erected a statue of Lajos Kossuth in 1902 and then started a fundraiser to erect the first statue of George Washington in Budapest.

The statue by Gyula Bezerédi was unveiled in 1906, with Ferenc Kossuth, Lajos Kossuth's son and Minister of Commerce in the incumbent Wekerle-government, attending the ceremony. The costs of creating and erecting the statue were covered entirely through public donations. 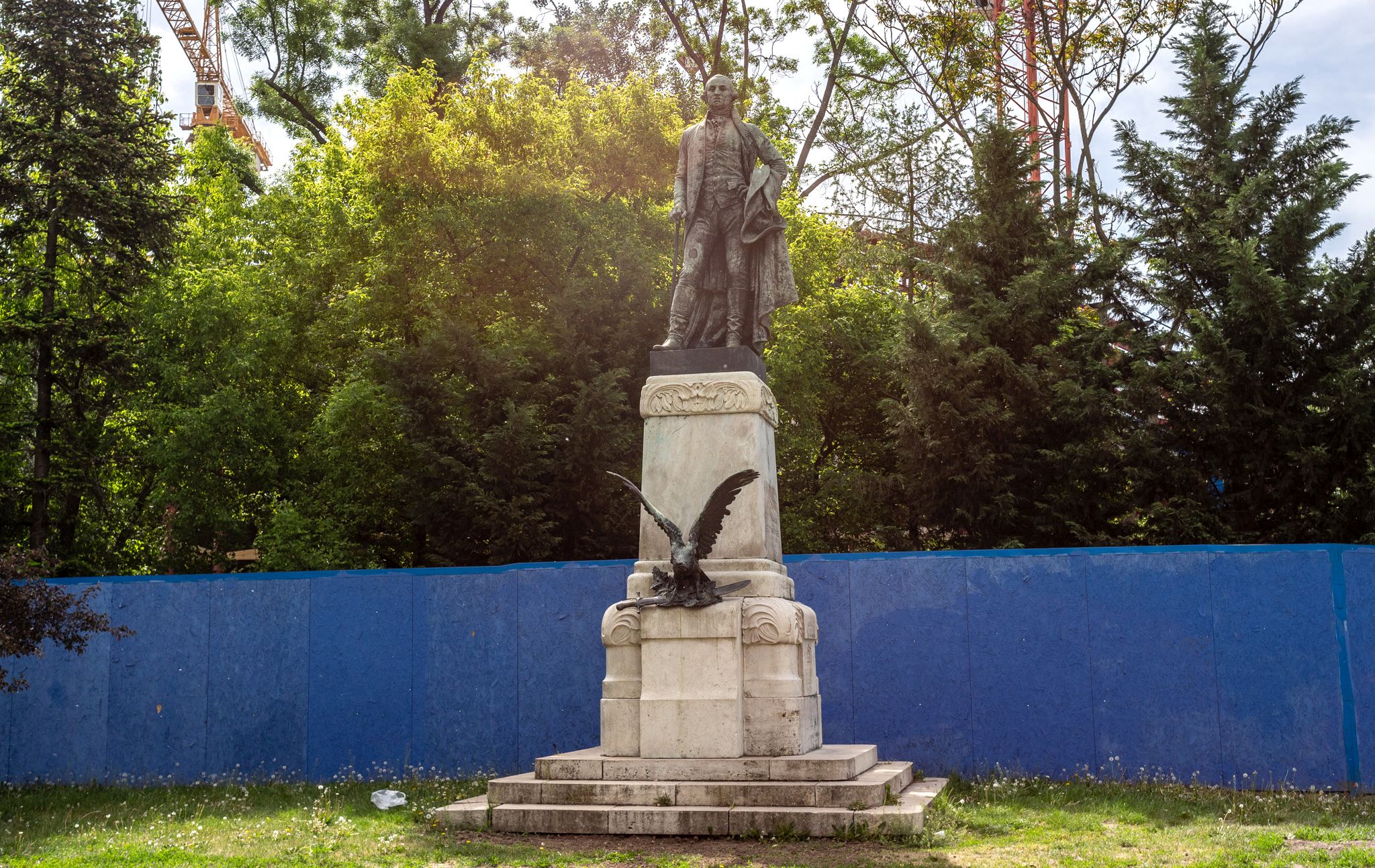 The statue of George Washington has stood in City Park since 1906 (Photo: Balázs Both/pestbuda.hu)

Theodore Roosevelt was the first President of the United States to visit Hungary. He stopped in the country for three days in 1910 during a European tour after his presidency. Since then, several presidents have visited a total of nine times. George H. W. Bush, George W. Bush, and Bill Clinton during their time in office, and Richard Nixon and Jimmy Carter after their terms had ended (the former in 1963 the latter in 1996). Bill Clinton visited three times, while both George Bush Sr and Jr visited twice.

President Ronald Reagan (through his negotiations with Mikhail Gorbachev, the last president of the Soviet Union), played an invaluable role in enabling the former socialist countries of Central and Eastern Europe to gain independence from the Soviet Union in 1989. He was honoured with a bust in City Park in 2006 (by Gábor Veres), and five years later – on the 100th anniversary of his birth – with a full figure statue on Szabadság Square in 2011 (by István Máté). 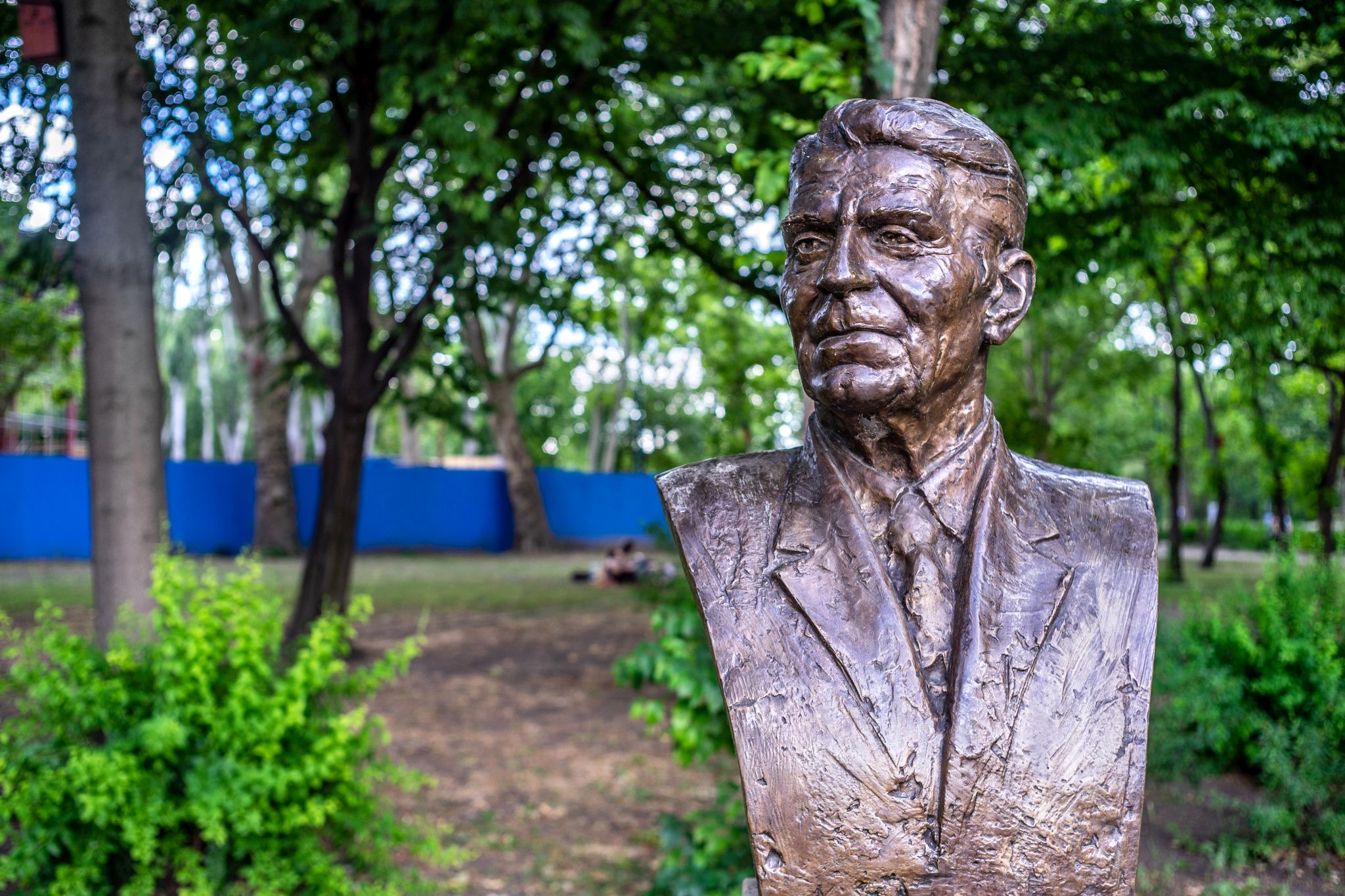 The statue Ronald Reagan was unveiled in 2006 (Photo: Balázs Both/pestbuda.hu) 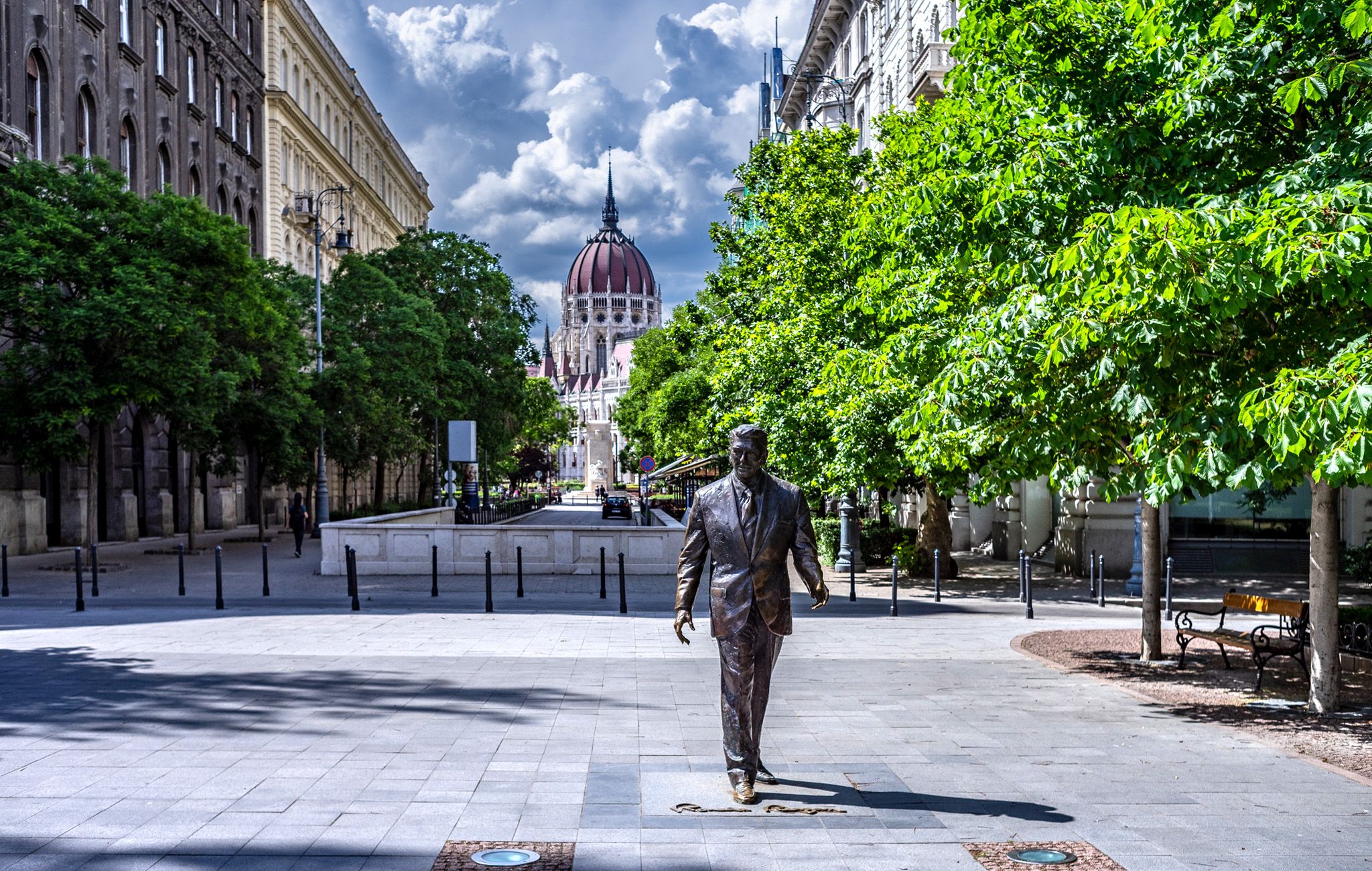 The full-length statue of President Reagan was erected on Szabadság Square in 2011 (Photo: Balázs Both/pestbuda.hu)

A statue of George H. W. Bush was unveiled in Budapest only a week ago on Szabadság Square. The first American president to give a public speech on Kossuth Square was honoured thirty years after the fall of communism, the reunification of Germany and Europe. President Bush visited Hungary in July 1989 – a week after the Hungarian communist leader, János Kádár died. Speaking in the rain, the President tore up his soaked papers and spoke to the crowd freely. 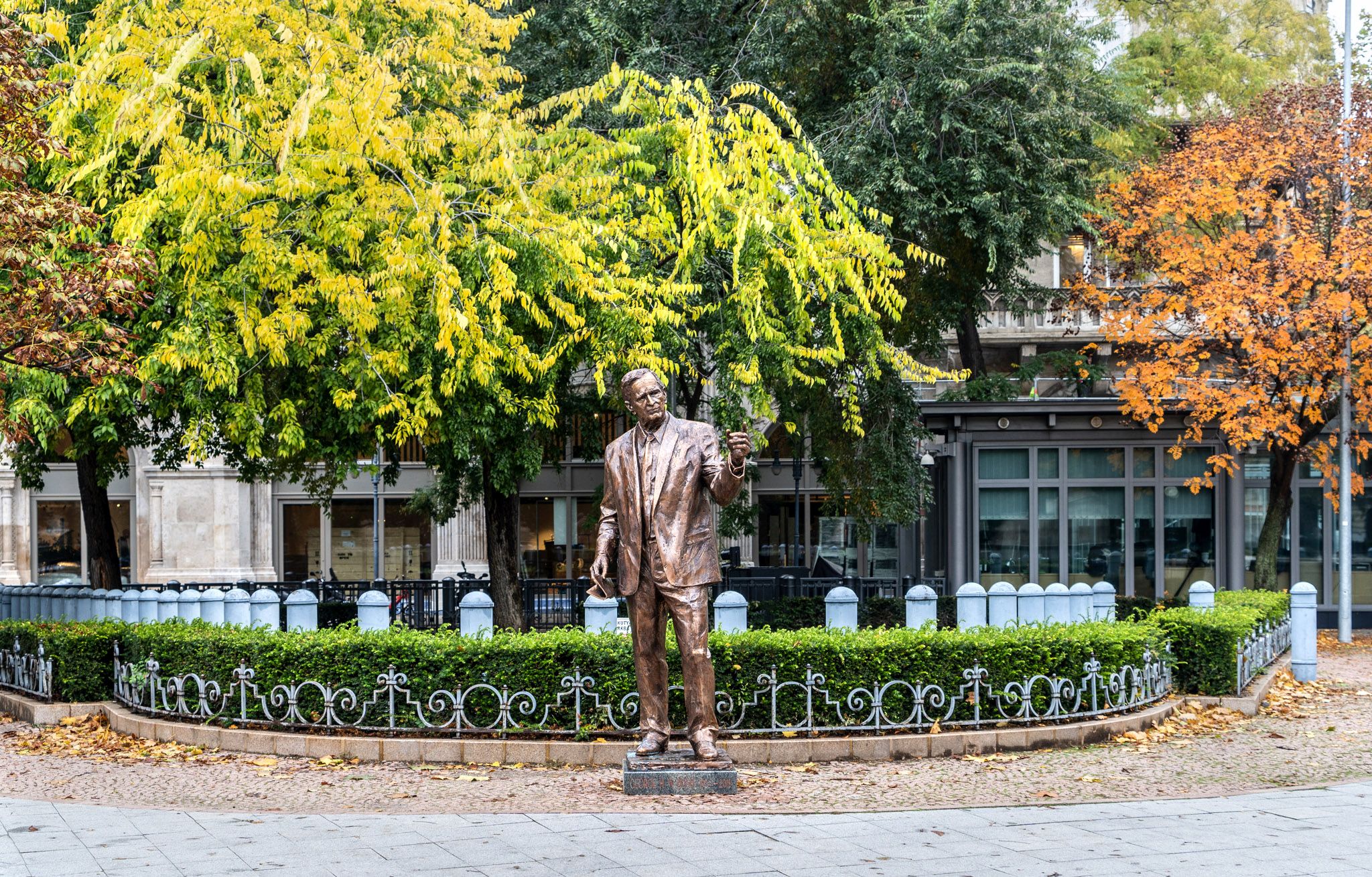 The statue depicts the president holding a piece of paper. Maybe the torn pages of his speech? The statue of Bush stands alongside that of Reagan not far from the US Embassy in Budapest, symbolising their joint fight against the "evil empire". Thus, Szabadság Square now houses statues of two US presidents. 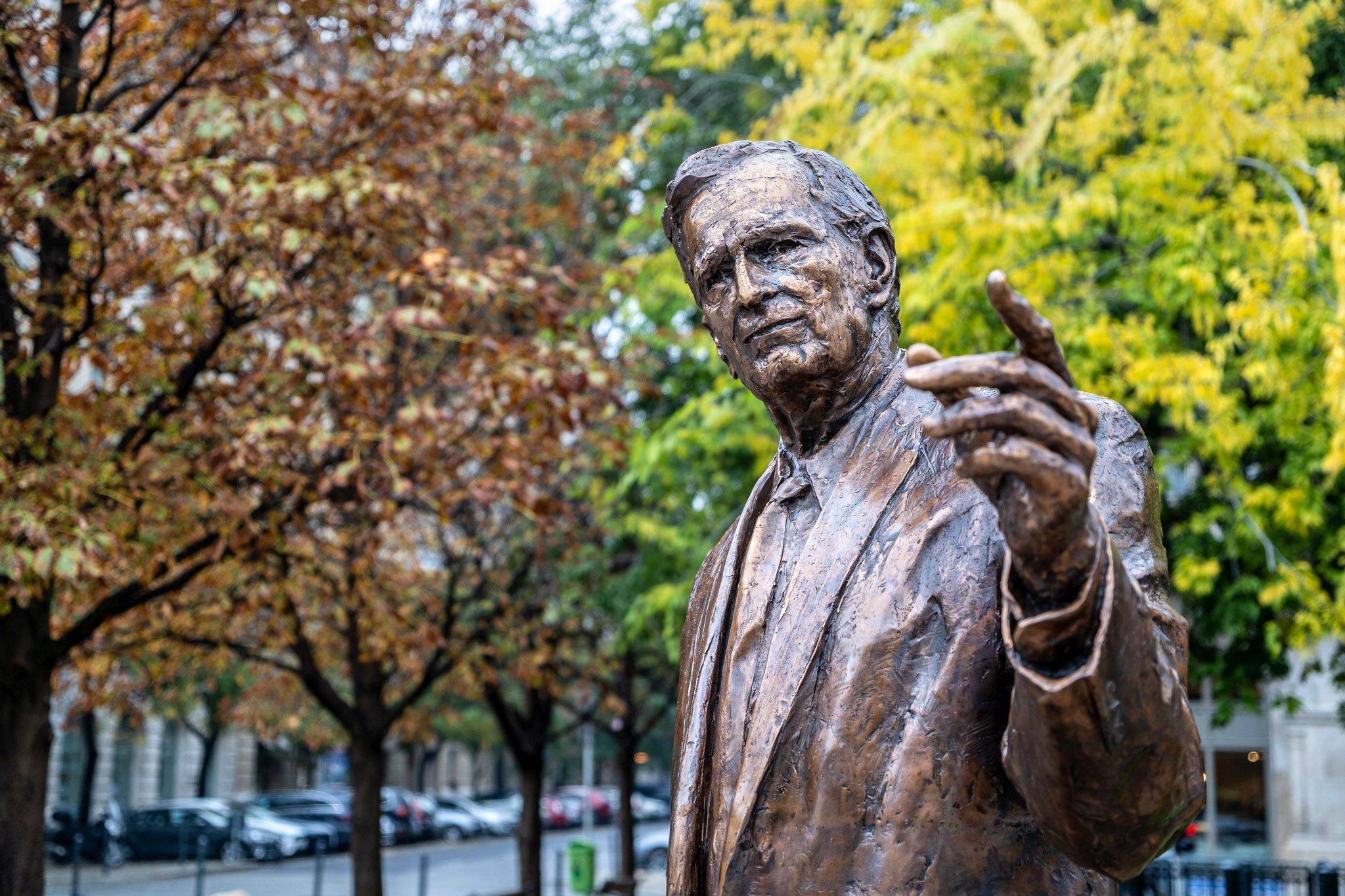 Another statue related to Americans in Budapest can also be found on the square, commemorating an event from 1919. Following the end of World War I, the commander of the US mission in Hungary was General Harry Hill Bandholtz. The general wrote himself into Hungarian history on 5 October 1919, when he used only his riding crop to prevent Romanian soldiers occupying Budapest at the time from looting the National Museum.

Bandholt used his riding crop to bar the doors of the museum and had them sealed on behalf of the Allies. The riding crop is hidden behind the generals back on the statue by Miklós Ligeti unveiled in 1936, to draw less attention to the awkward incident. 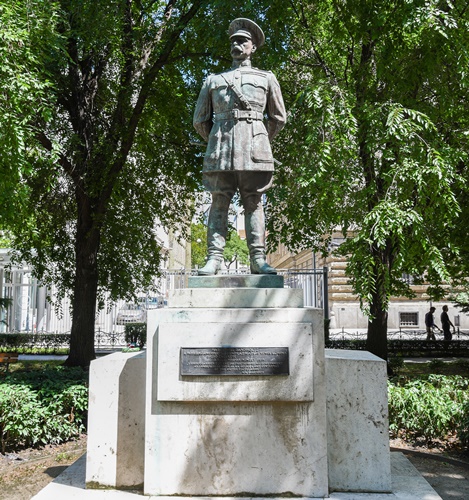 The statue of General Bandholtz was removed from Szabadság Square in 1949 but returned in 1989 before George H W Bush visited Budapest (Photo: Balázs Both/pestbuda.hu)

Alongside the statues of presidents and a general, Budapest is filled with memorials and statues from a lighter side of art.

Still on Szabadság Square, a small statue stands before a barrier in front of what was once the headquarters of the Hungarian National Television: Kermit the Frog (Mihail Kolodko, 2017), the famous Muppet, known as Breki in Hungary. The building is no longer a TV studio, and the Muppet Show is no longer aired, hence the title: End of the Show. Without a job, Kermit jumps out of the building and returns to nature, and sits on the square as a proper frog would. He stares longingly towards the US Embassy, remembering the British-American roots of the series. (The Muppet Show was extremely popular in 1980s Hungary). 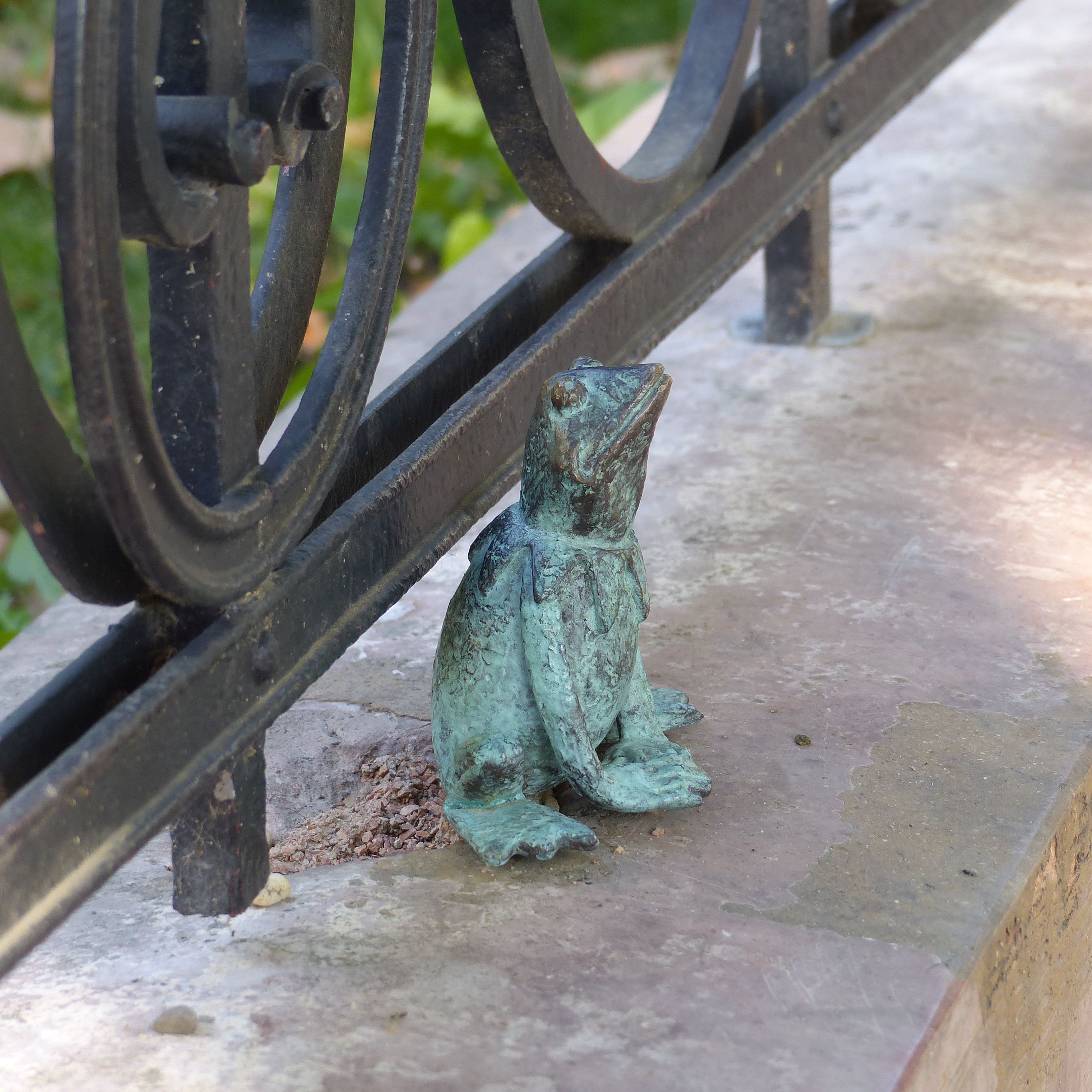 Slightly north of the Buda end of Margit Bridge there is a small park, from which the sign is often stolen and has to be replaced. The previously unnamed square was named after Elvis Presley in 2011. During a TV appearance in January 1957, after singing his song Peace in the valley, the "King" asked viewers to offer donations to Hungarians who were in a difficult situation following the revolution of 1956. Following this call, several aid packages, mainly filled with food, arrived in Hungary. In 2011, Elvis Presley also became an honorary citizen of Budapest. 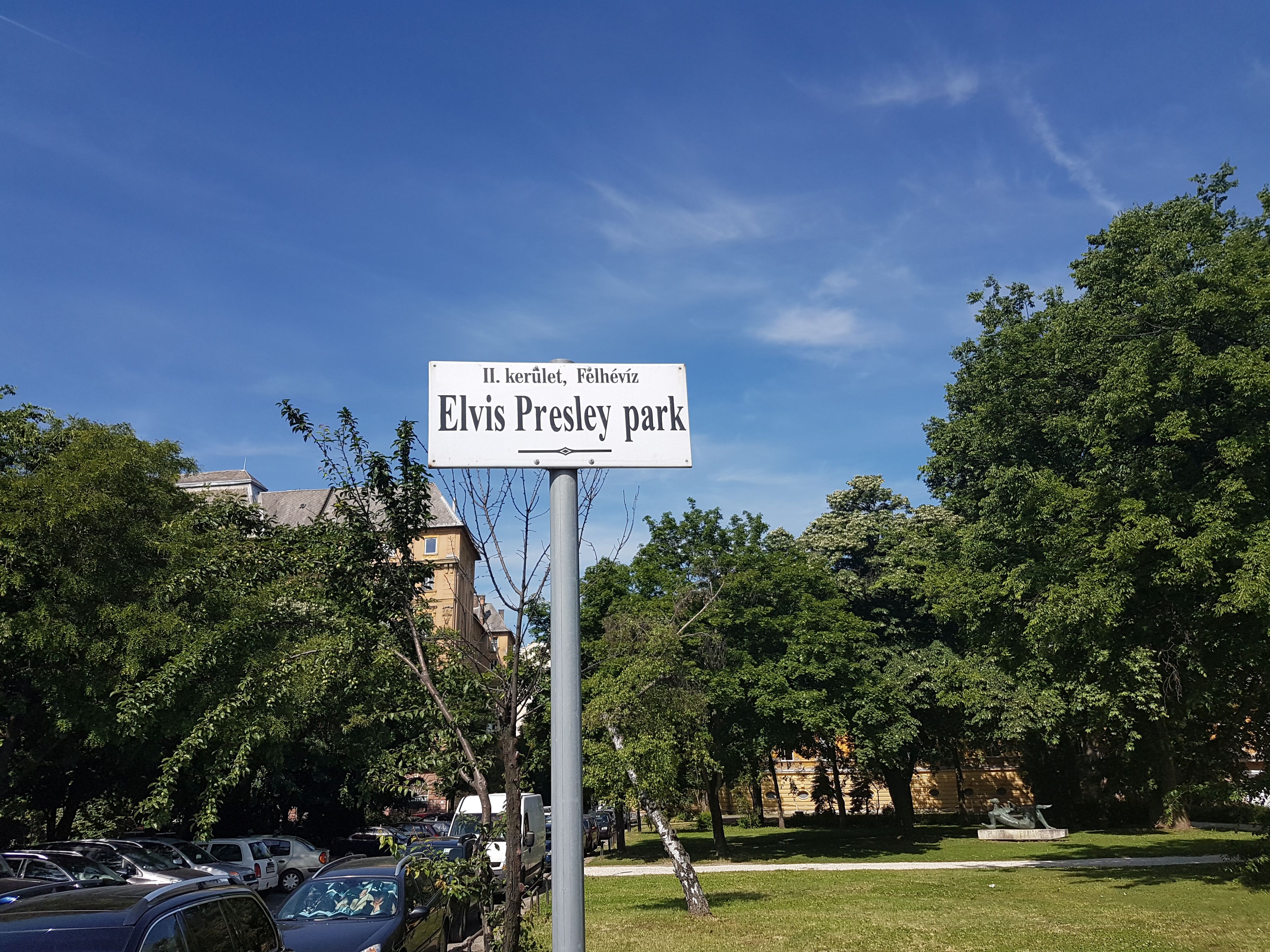 Walking along Szent István Boulevard a statue of Columbo, the protagonist of the American detective series from the 1970and 80s can be seen. Legend has it, that the actor who portrayed "everyone's favourite detective", Peter Falk was a descendant of the Hungarian writer and politician Miksa Falk, whom after the street the statue stands on is named. While any relation been the two was ruled out conclusively in 2014, the statue remains a colourful addition to the city, while ensuring the legend lives on... 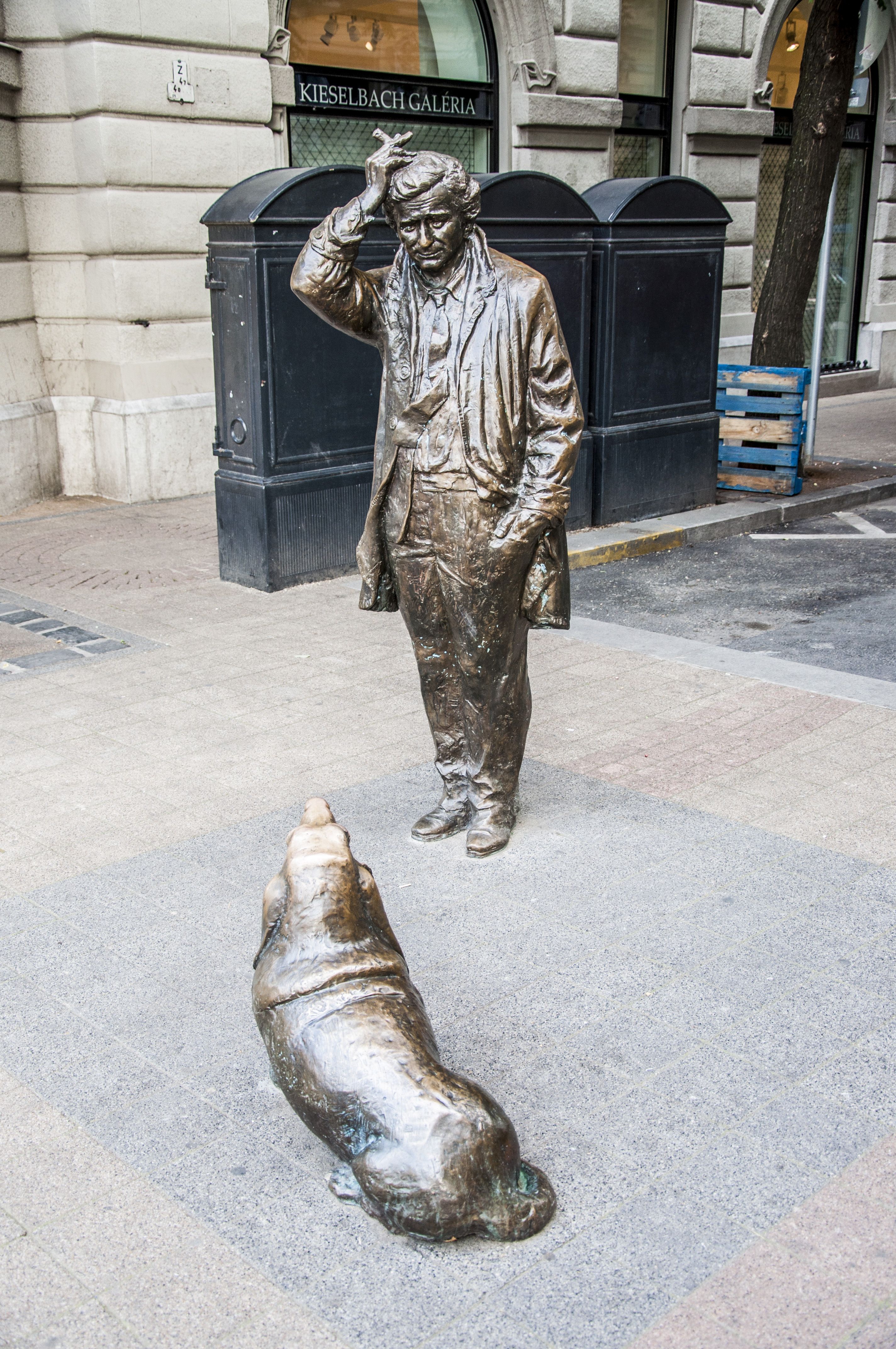 In addition to these statues, American history also appears in the names of streets and public spaces of the city. The Franklin Stairs and Street bear the name of Benjamin Franklin, while a street was named after Thomas Alva Edison on the 150th anniversary of is birth in the 14th district. The same District also houses the Washington Promenade, which leads to the statue of the first US president.

While the future still hides the next President of the United States of America, and whether they will ever have a statue in Budapest, a visit to these statues and locations is a pleasant autumn walk for anyone in Budapest.