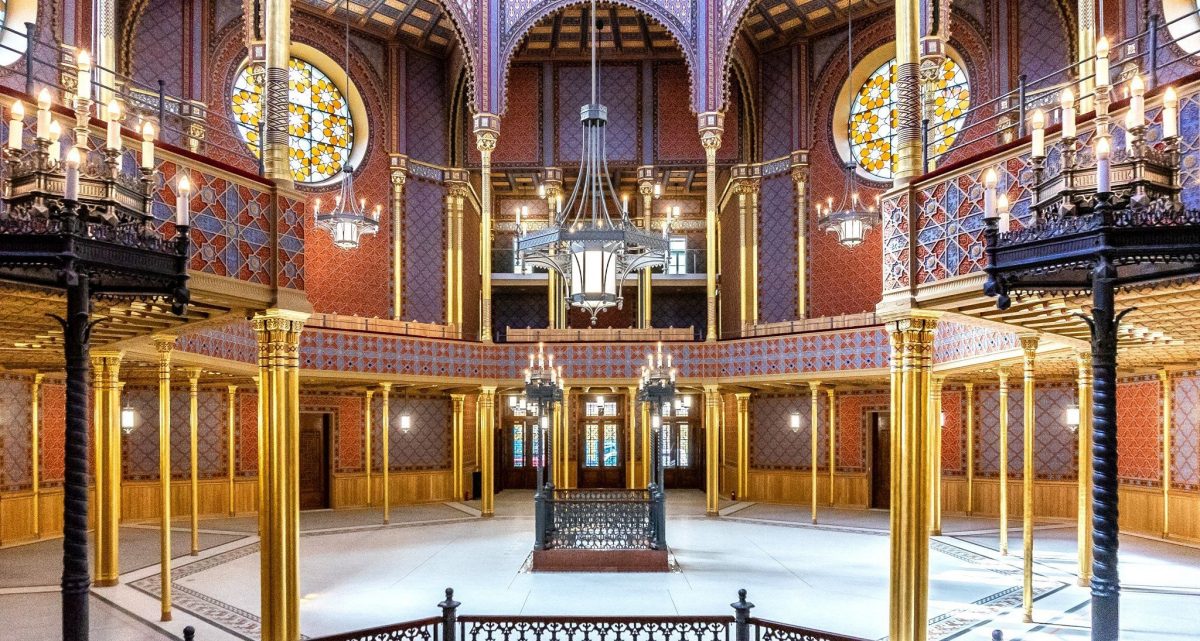 The renovated Rumbach Sebestyén Street Synagogue was opened as a renewed sacred, communal and cultural space. The synagogue, built in 1872 according to the plans of Otto Wagner, stood empty for decades, and its reconstruction was completed last year.

As part of the inauguration of the renovated Rumbach Sebestyén Street Synagogue, the Torah was carried through nearby streets in a celebratory parade – from the Emánuel Memorial tree next to the Dohány Street Synagogue, towards Károly Boulevard and Madách Square – on the afternoon of June 10. 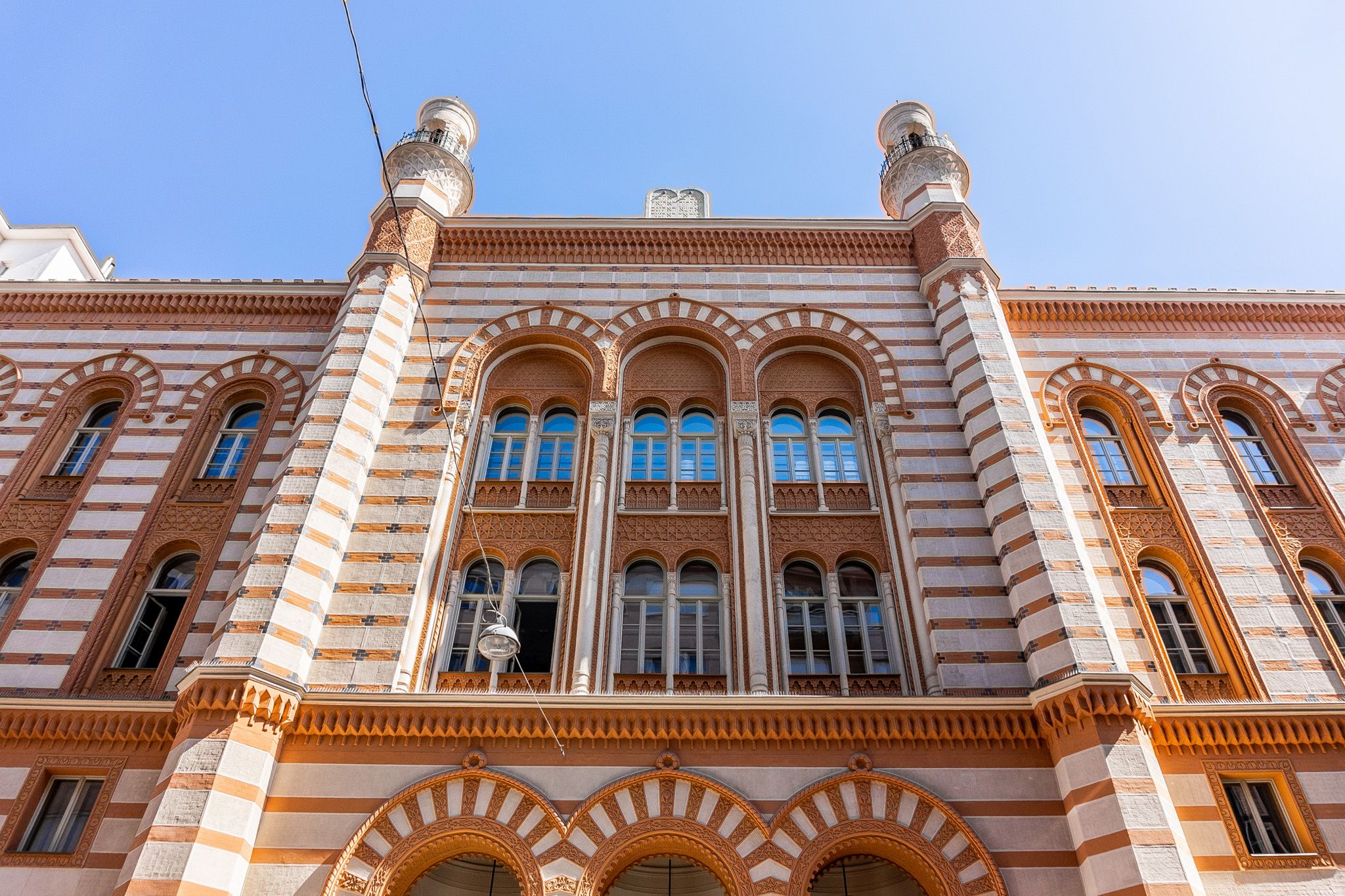 The Rumbach Sebestyén Street Synagogue is located in the 7th District. The facade of the building reflects the historicist style with oriental, Moorish features (Photo: Balázs Both/pestbuda.hu)

The building, which opened in 1872 was designed by Otto Wagner, stood empty for decades in a dilapidated state and has been renovated in every detail. The interior of the synagogue was organised around the centre to accommodate different liturgical needs. The room has a diameter of 24.8 metres and a height of 28.15 metres. As per tradition, the Torah reading stand, the bema, was placed in the centre of the space surrounded by the gallery. 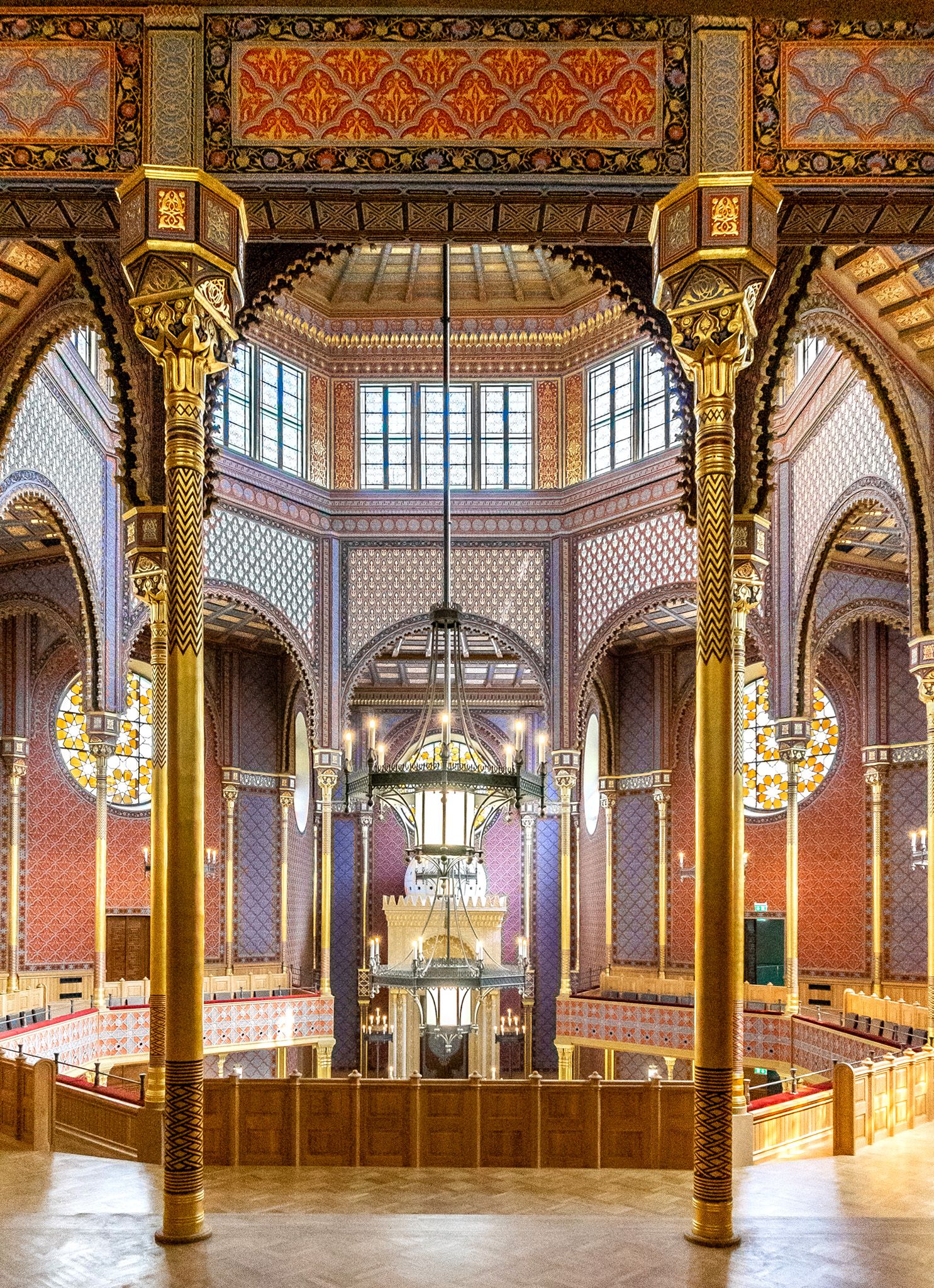 Opposite the main entrance, the photo taken from the first floor shows the huge wrought-iron lamp and the gilded columns (Photo: Balázs Both/pestbuda.hu) 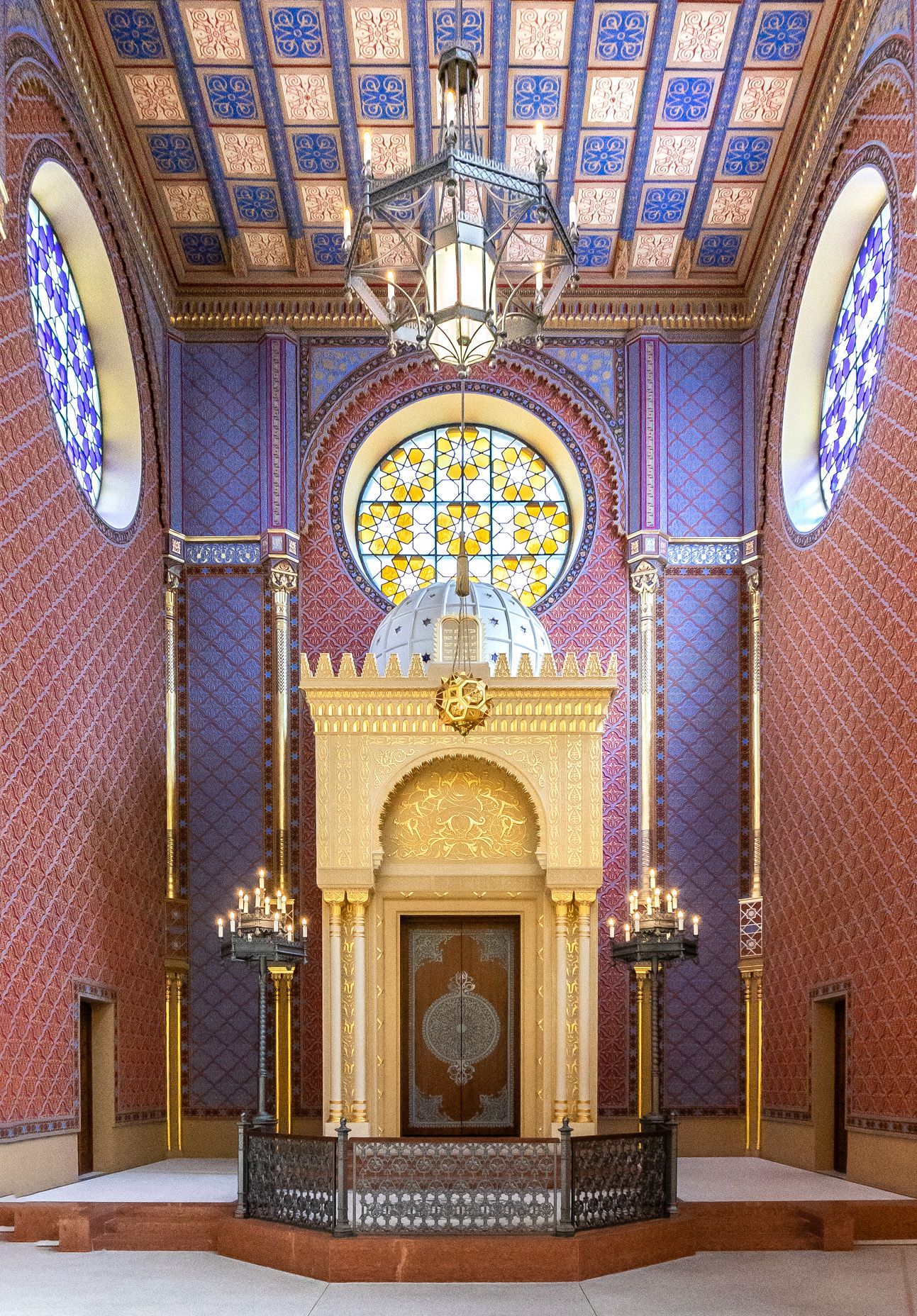 The original ark was dismantled in 1990, but some pieces survived, which were used as a model in the current re-creation (Photo: Balázs Both/pestbuda.hu)

The bema can be raised and lowered with a unique hydraulic system, so the sacred space can be made suitable for cultural events, even large concerts, at the touch of a button. The building also houses a café, a salon and a conference room, and rooms that can also be used for museum pedagogical classes. 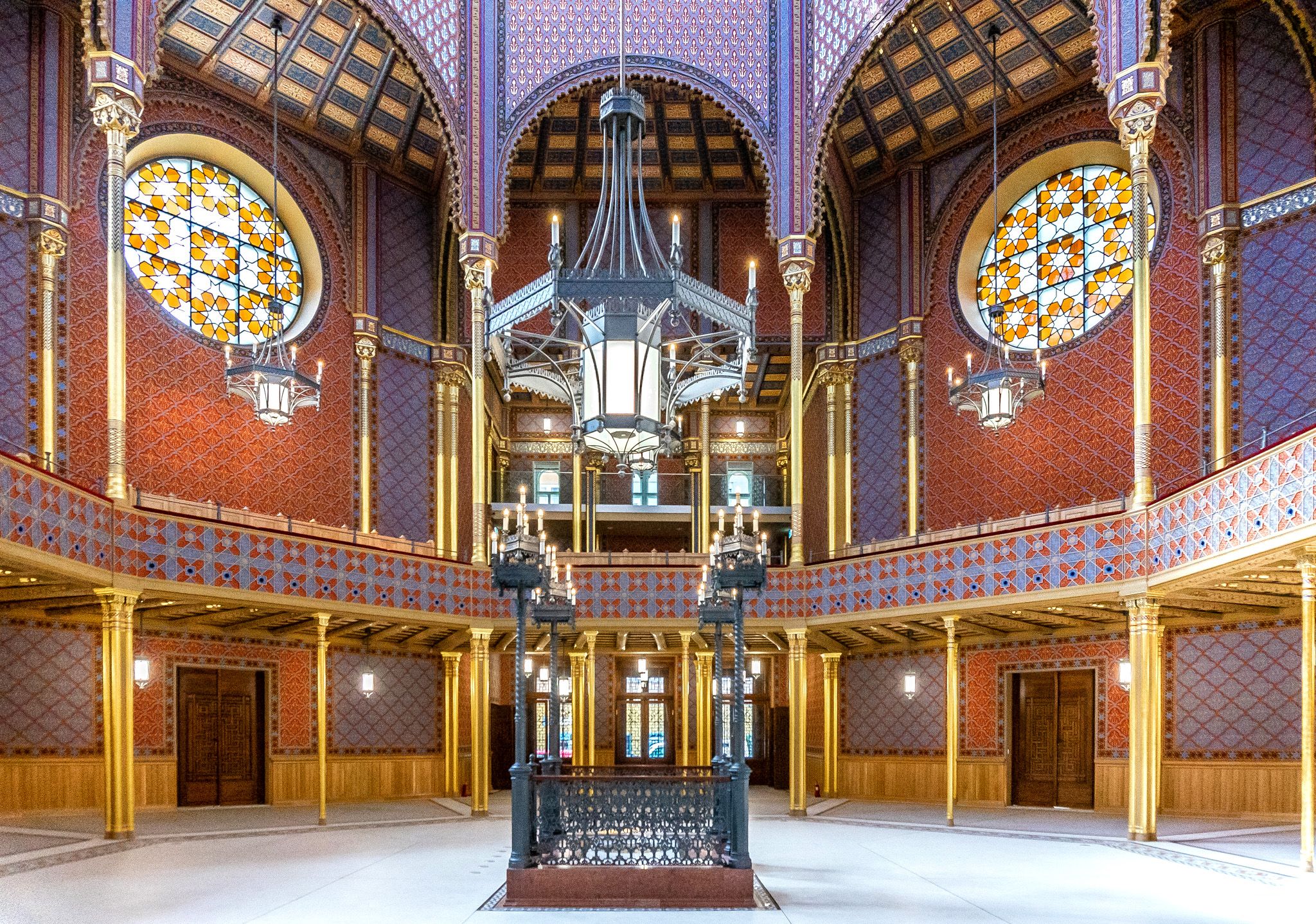 Opposite the main entrance. The bema in the centre can be sunk into the floor for special occasions (Photo: Balázs Both/pestbuda.hu) 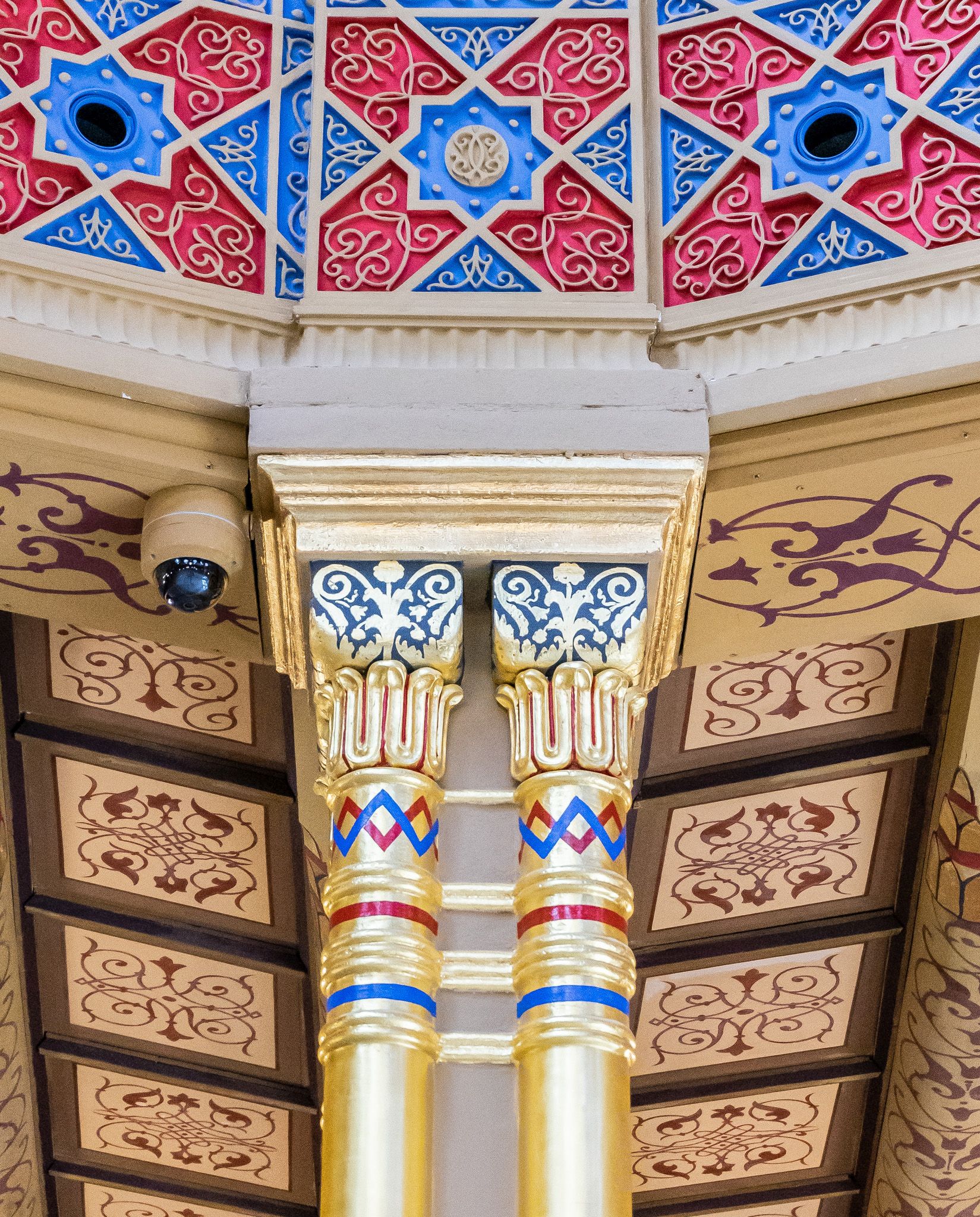 Ornate column head, plant motifs on gilded columns and the ceiling. In the interior of the synagogue, the elements and ornaments, where possible, were reconstructed with the original colours, based on the surviving pieces (Photo: Balázs Both/pestbuda.hu) 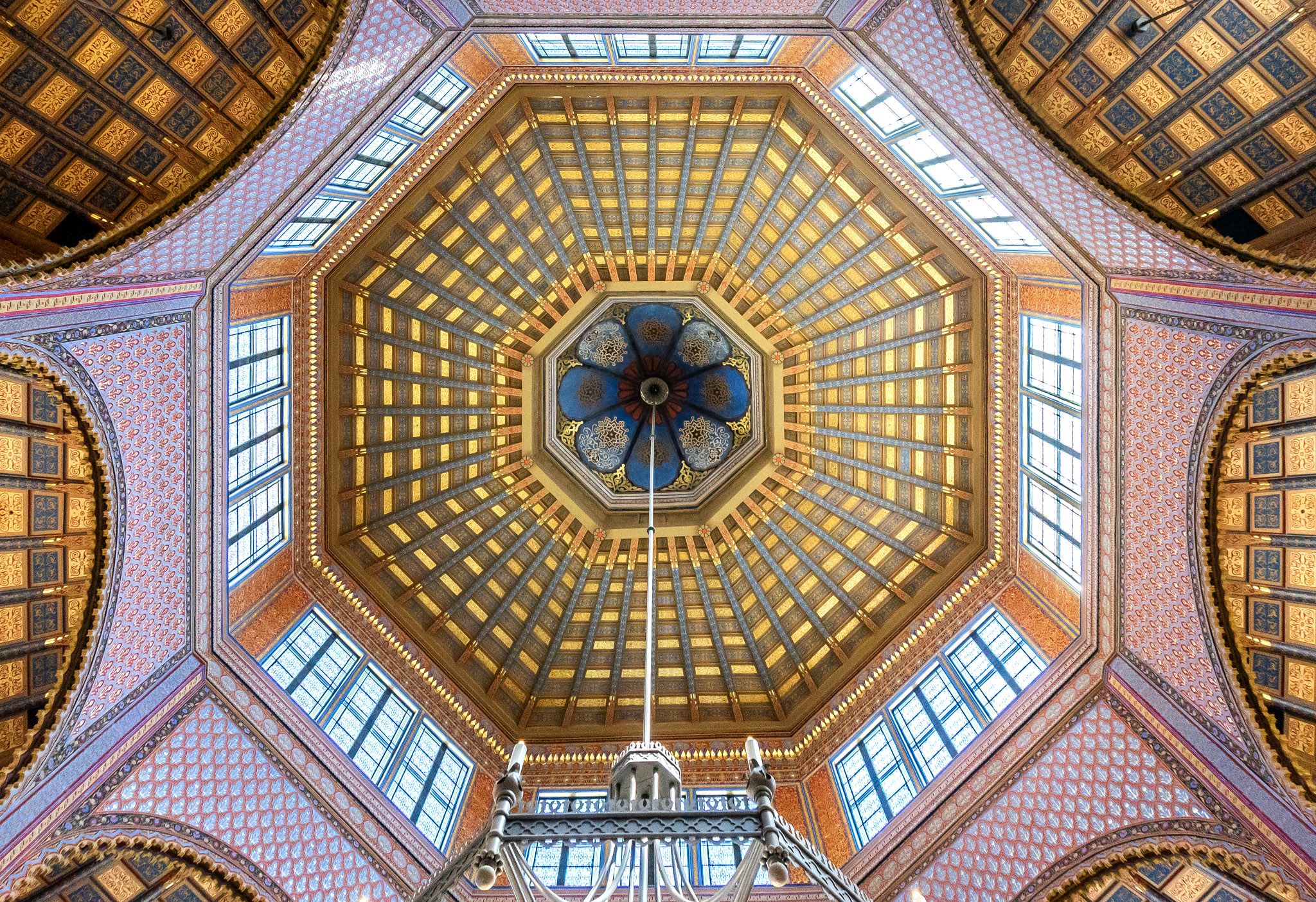 View of the roof structure, the central synagogue is covered by a huge dome. The painted glass windows of the dome were designed by Kornél Baliga (Photo: Balázs Both/pestbuda.hu)

On the third floor, a permanent exhibition presents the life and possibilities of Hungarian Jews through the history of a Hungarian Jewish family. The audiovisual experience based on digital devices, combining cinematic and animated elements, is also suitable for reaching young people. As part of the exhibition, two “time capsules” compare the everyday phenomena of the 1740s and 2020s, such as typical foods, distance travelled in a day.

The ICOMOS award-winning reconstruction of the monument of international significance was carried out with government support of 3.2 billion HUF.