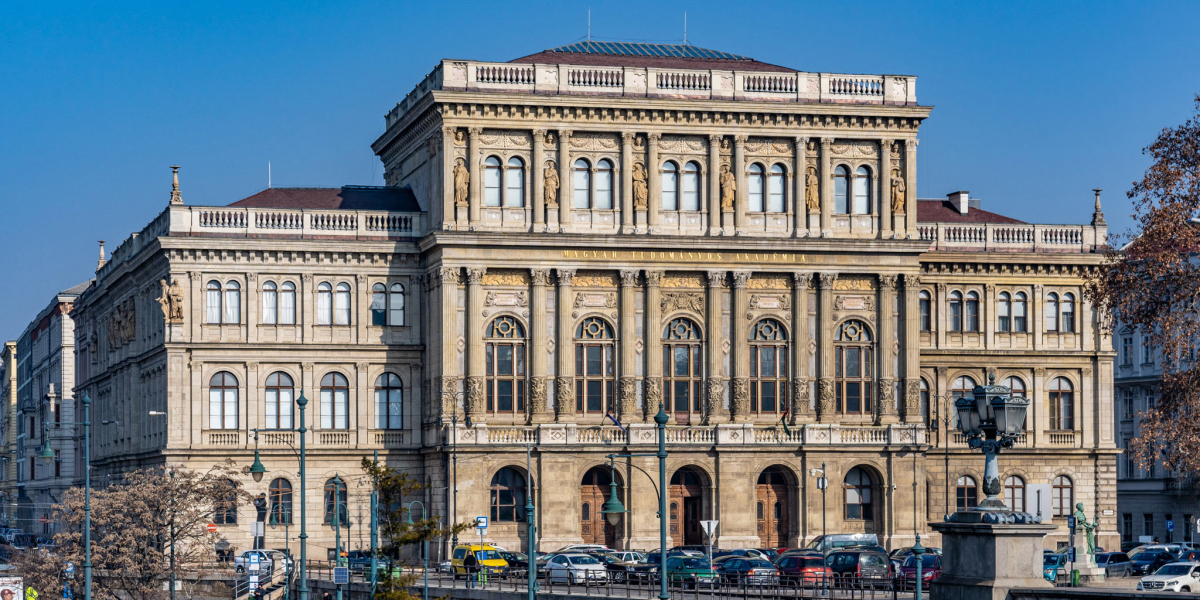 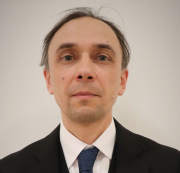 Renovation of the headquarters of the Hungarian Academy of Sciences will begin soon. The Neo-Renaissance palace was built between 1862 and 1865, according to the plans of Berlin-based architect Friedrich August Stüler, and execution was controlled by renowned architects such as Miklós Ybl and Antal Szkalnitzky. The company of scientists waited forty years for the independent headquarters. The institution, founded in 1825, rented rooms in the city's famous buildings until the palace next to the Chain Bridge was completed.

Most of the foreign scientific institutions established in the 17th century (Accademia del Cimento - Florence, 1657; Royal Society - London, 1660; Académie des sciences - Paris, 1666) were established as a result of royal patronage, while in Hungary the Academy - in the 18th century. After the unsuccessful antecedents of the 19th century. At the beginning of the 19th century, it was created and maintained by donations from private individuals, mainly lords.

It is a well-known fact that Count István Széchenyi spoke at the Lower House of the Parliament of Bratislava (today's Pozsony, Slovakia) on 3 November 1825, in which he offered his annual income - about 60,000 forints - in order to establish a Hungarian scientific society. On the other hand, it is less known that this “noble gesture” of the “greatest Hungarian” - as Kossuth called Széchenyi later - was not perpetuated in the already fragmentary parliamentary documents, but the diary notes and accounts of some parliamentary participants.

The offer on 3 November was about the intention, it was incorporated into the legal framework by the 11th Act of 1827, with the title of a scientific society or Hungarian academy to be established for the cultivation of the Hungarian language. The institution was given a permanent building in 1865. 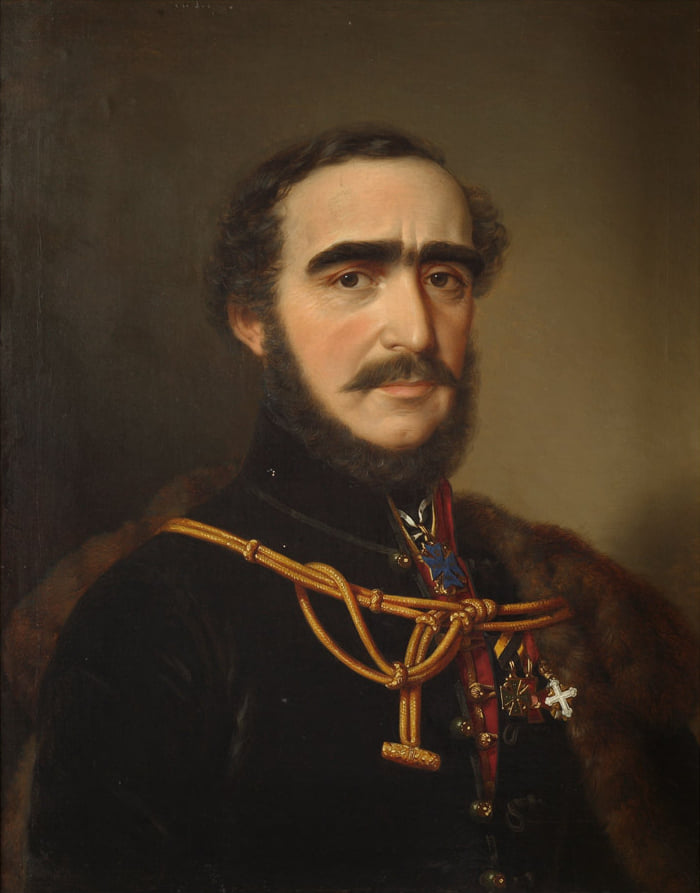 Count István Széchenyi in a painting by Miklós Barabás, in 1848 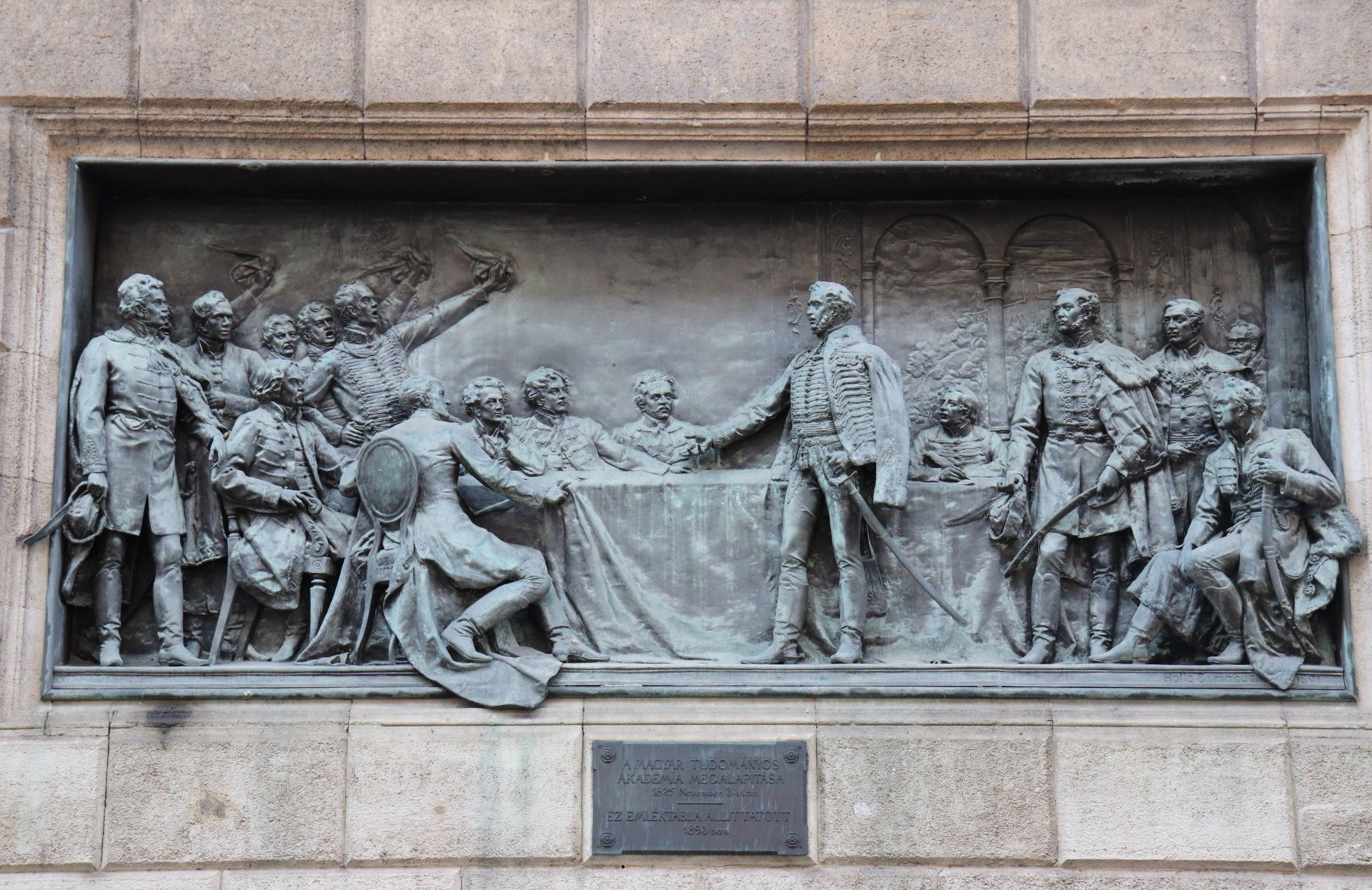 Count István Széchenyi offers his one-year income to establish the Academy at the 3 November 1825 session of the Bratislava Parliament. Bronze relief by Barnabás Holló made in 1893 on the eastern facade of the Academy building (Photo: Zsolt Dubniczky/pestbuda.hu)

Although the institution was conceived in Bratislava and held its first meetings in the hall of the Upper House between 1825 and 1830, the statutes designated Pest as its seat, and its first board meeting took place in Pest. Thanks to the operation of the Beautification Committee set up by Archduke Joseph, Palatine of Hungary, Pest began to develop into a large city of national importance in addition to its economic strength.

One of the most lively social and public centres of the city was the Kirakodó Square (today's Széchenyi Square), whose classicist palace line was one of the most beautiful among the important cities of the time. According to the plans of József Hild, the two-storey house of the wholesaler Antal Deron was built here in 1828–1829, which was bought a few years later, in 1833, by János Nákó, a merchant of Macedonian origin. The Nákó Palace was located opposite the Chain Bridge, on the central front line of the square, in the axis of the bridge.

The approximately eighty-meter-wide building with a slightly protruding central risalit and a 25-axis window opening was the most impressive palace in Kirakodó Square, demolished in the early 20th century and replaced by today’s Gresham Palace. The Society of Scholars, as the institution of the Academy was called at the time, rented premises on the first floor of the Deron House in Pest in 1831, where office work and meetings took place.

However, due to the scarcity of space, they did not hold the first public assembly here, but in the ceremonial hall of the County Hall on 7 September 1832, which was later followed by several more, and the first board meetings were also held here. 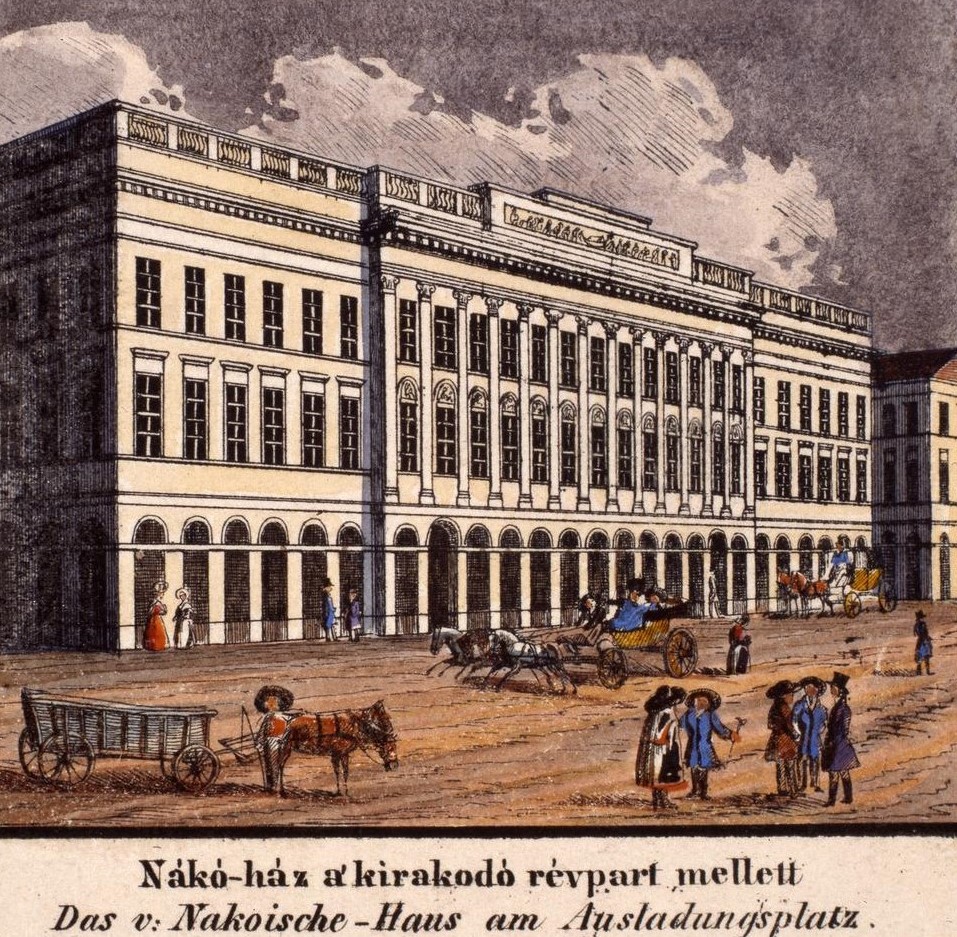 The Nákó Palace in 1837 with graphics by Carl Vasquez. The Academy rented premises on the first floor from 1831 (Source: FSZEK Budapest Collection) 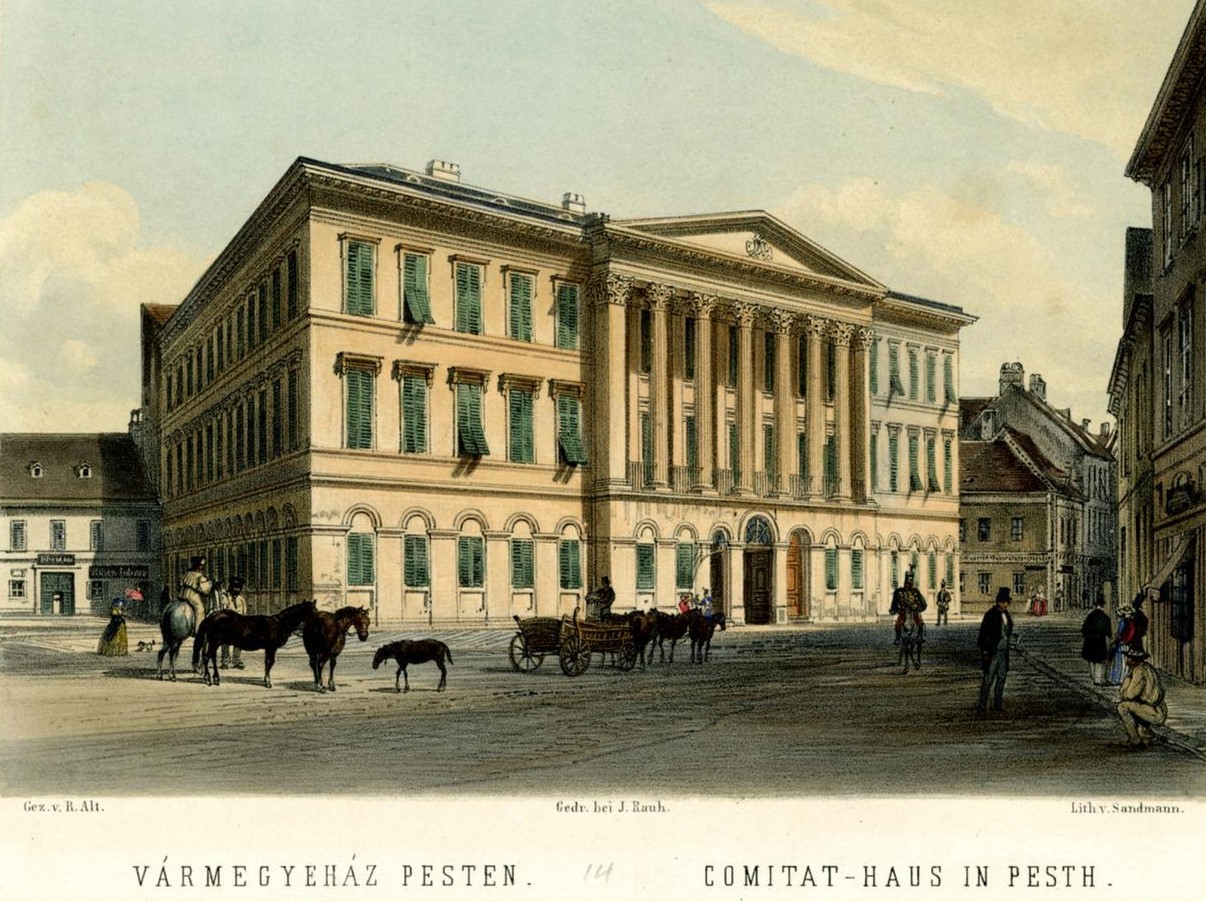 The County Hall in Pest with a graphic by Rudolf Alt, in 1847. The Society of Scientists met several times in the ceremonial hall of the building (Source: FSZEK Budapest Collection) 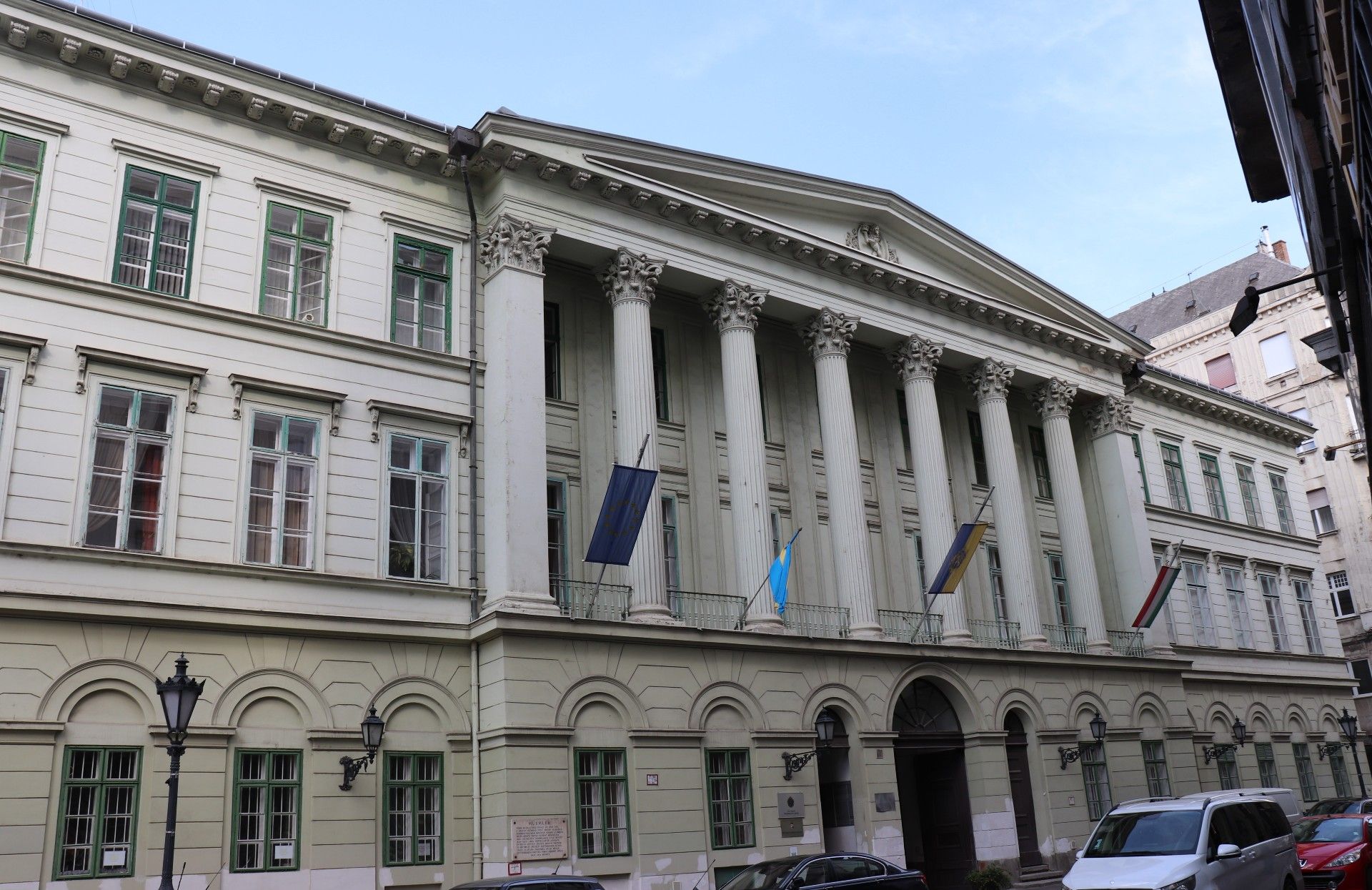 However, the society was forced to move in 1833. Its new headquarters are located between Urak Street (today's 3 Petőfi Sándor Street) and Gránátos Street (today 6 Városház Street). It was in the two-courtyard house of István Trattner-Károlyi, writer, lawyer and printing house owner, and the society rented the first and second floors of the building, also designed by József Hild, overlooking Gránátos Street.

The building, which is still standing and visible today, received its third floor in the 1840s. The premises of the Academy included a larger meeting room where the board and weekly meetings were held, four rooms for secretarial office and committee meetings, an archive room and an office with a hall. The Academic Library opened here in 1844, and literary documents were kept in four larger and four smaller rooms. 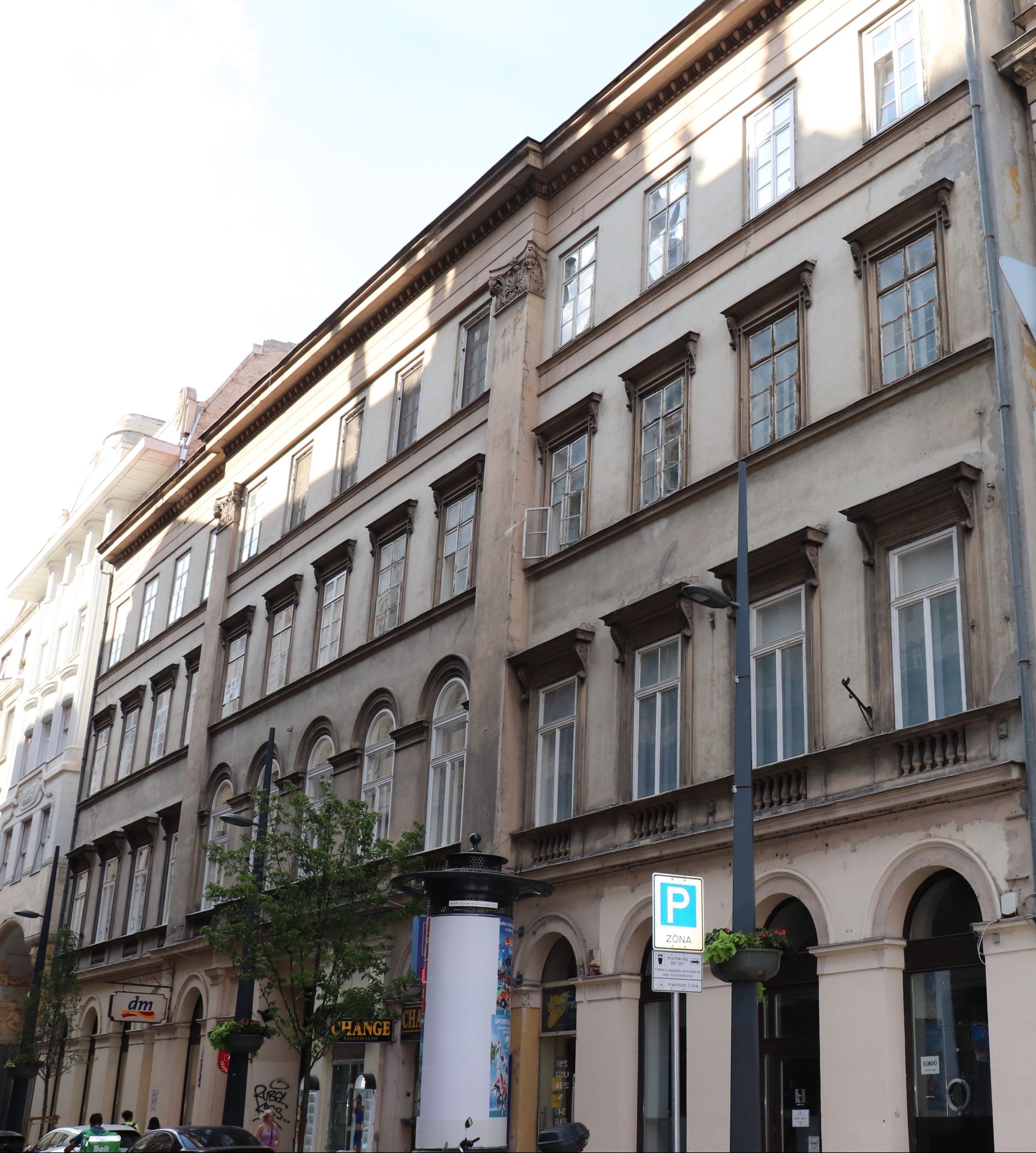 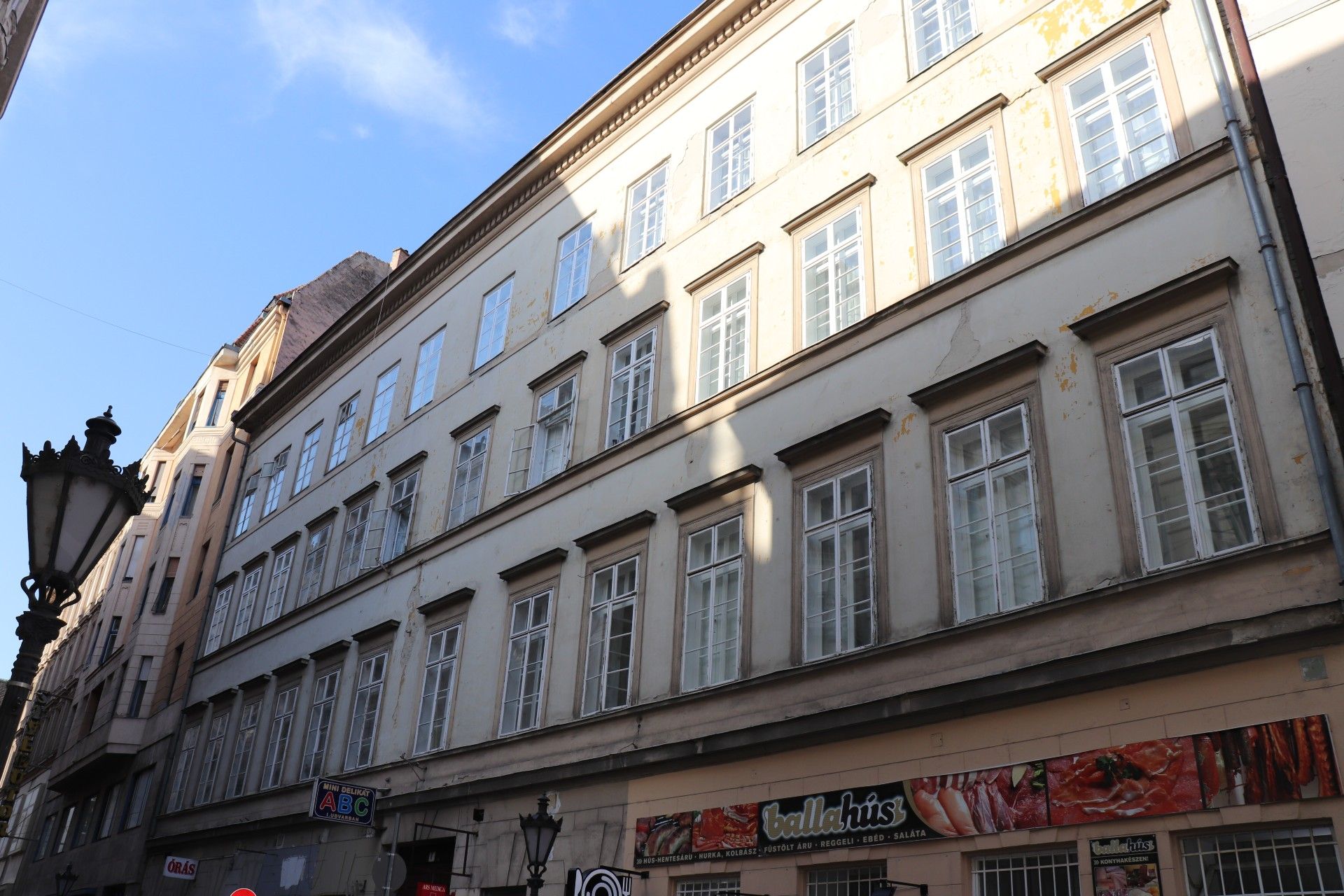 The facade of the Trattner-Károlyi House overlooking today's Városház Street, where the Academy rented the first and second floor rooms between 1833 and 1865 (Photo: Zsolt Dubniczky/pestbuda.hu)

The rebuilding of the National Museum in the 1840s also raised the idea that the Academy would win permanent accommodation here, where it would have had more rooms and halls. Moreover, Széchenyi even won a fifth room from the palatine. However, the premises still proved to be cramped, and this plan was permanently rejected after the death of Archduke Joseph, Palatine of Hungary. Between 1858 and 1864, however, the general assemblies were held partly in the ceremonial hall of the Museum and partly in the County Hall. 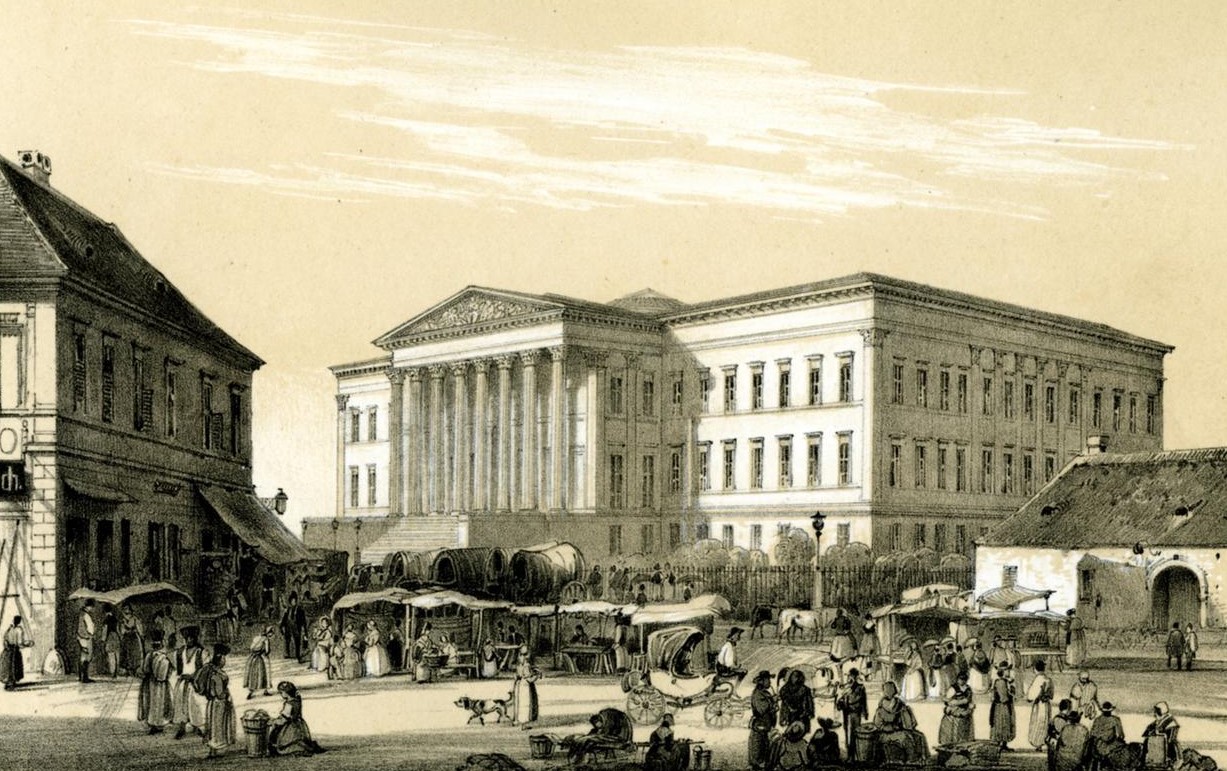 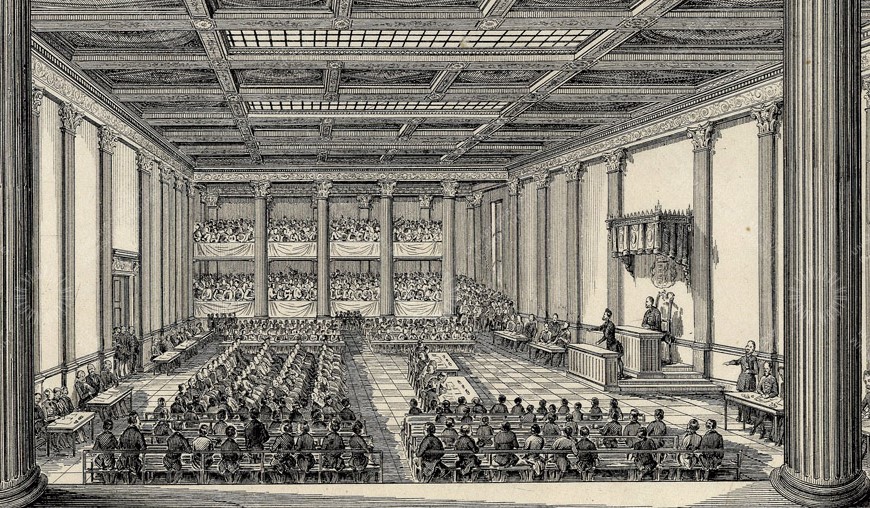 The ceremonial hall of the National Museum on the lithograph of Ágost Frigyes Walzel. Not only did the Upper House met in it in 1848, but the Academy also held assemblies here (Source: Hungarian National Museum)

However, the Museum Garden has emerged as a possible construction site, which was an interesting idea that was not really thought through. Ágoston Kubinyi, the director of the National Museum at the time, raised that idea, and according to him, the building would have stood on the corner of Sándor (now Bródy Sándor) and Ötpacsirta (now Pollack Mihály Square) Streets. The bizarre idea was finally discarded in 1856, which highlighted the plight of the Academy, which was facing placement difficulties, which immediately preceded the national collection that followed. 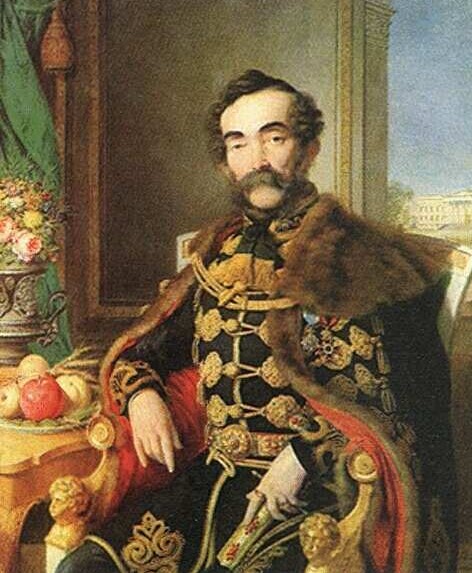 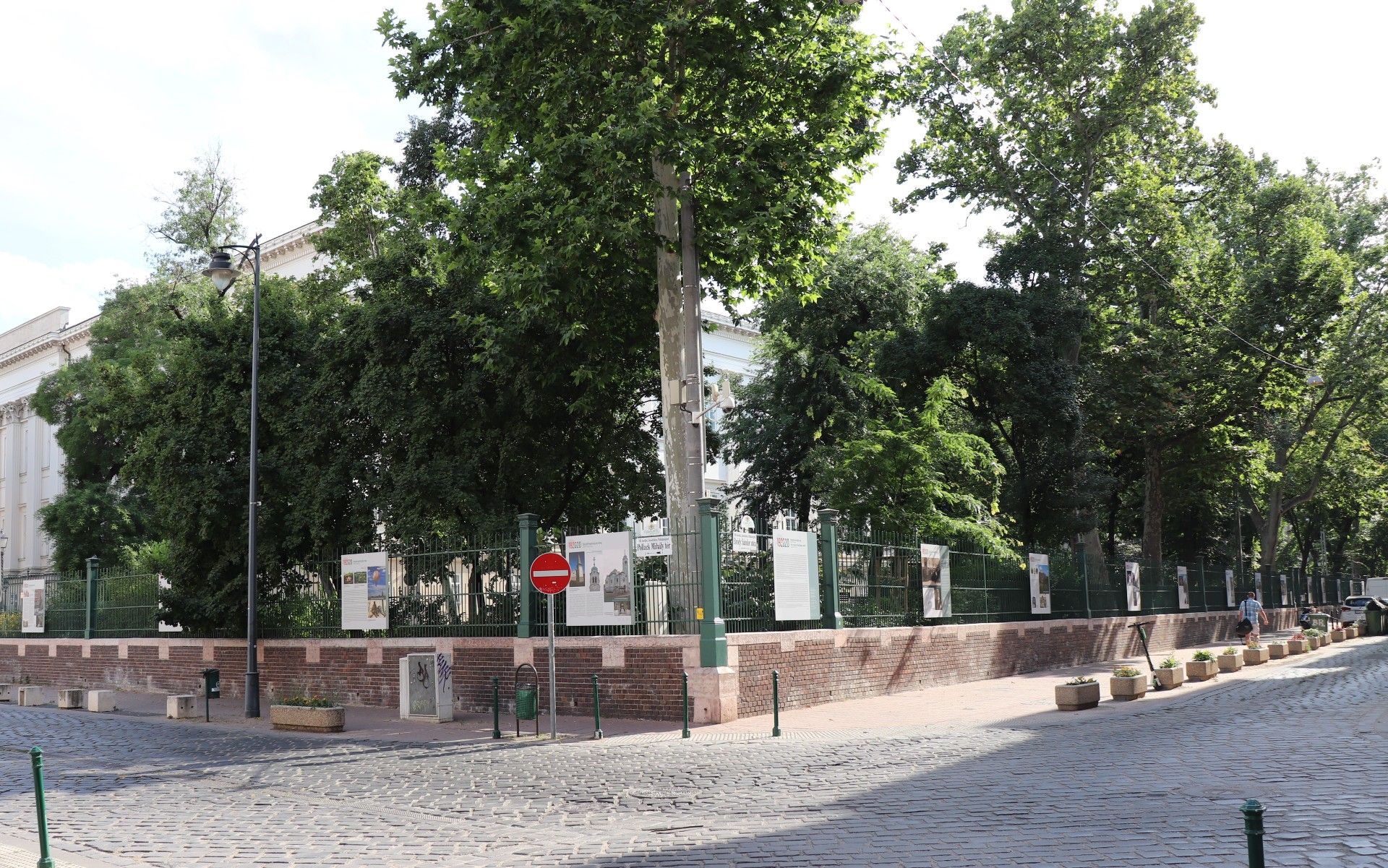 The Museum Garden on the corner of today's Bródy Sándor Street and Pollack Mihály Square, where the Academy building was planned in the 1850s (Photo: Zsolt Dubniczky/pestbuda.hu) 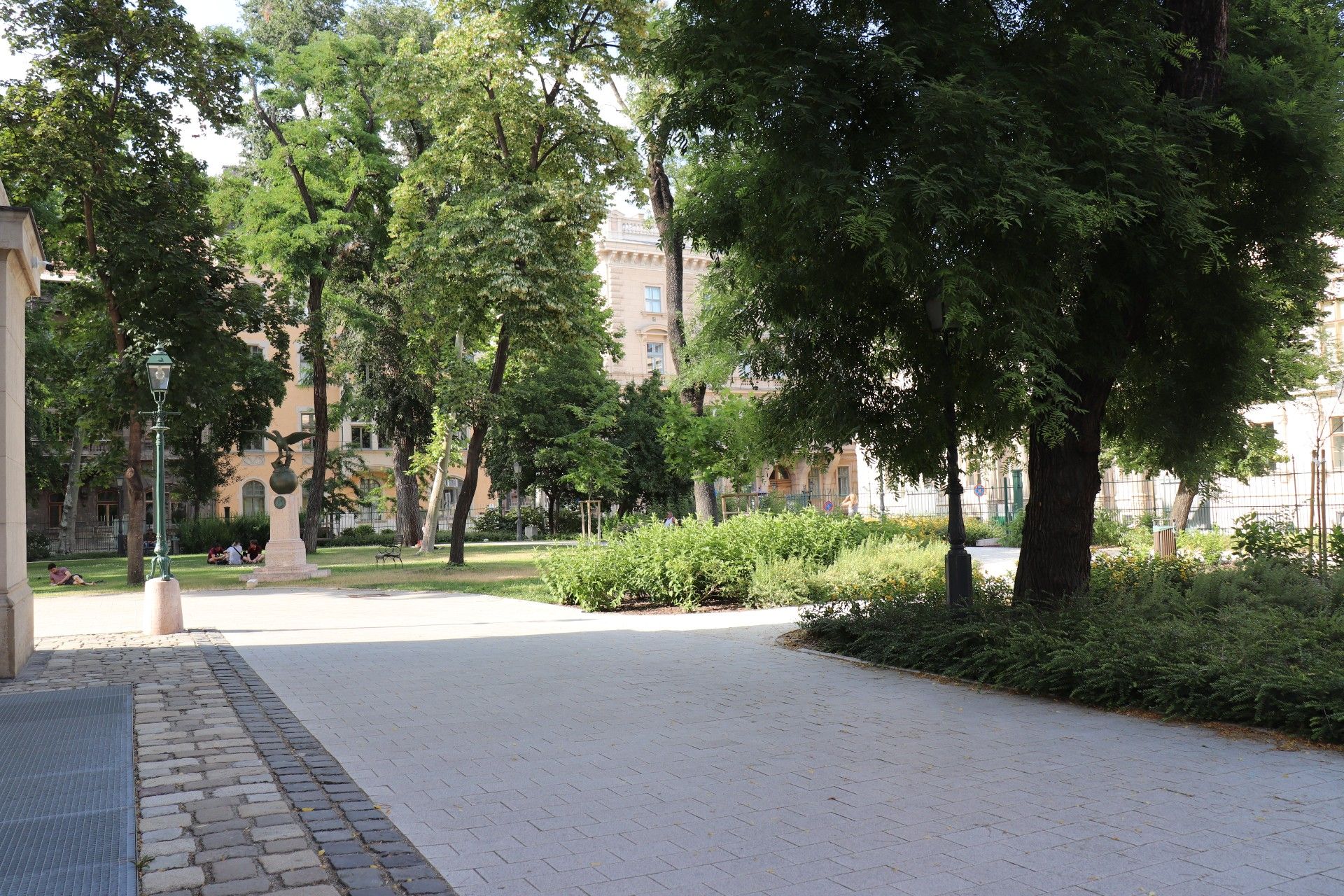 The building of the Academy was also planned in the corner of the Museum Garden in the 1850s (Photo: Zsolt Dubniczky/pestbuda.hu)

The construction of the Academy palace reappeared in the late 1850s and received greater publicity and support. Tradition links the collection to the construction of the headquarters to the offer of 80,000 forints made by the banker Baron Simon Sina in the summer of 1858. The Baron’s offering was indeed a huge, energy-releasing, inspiring accomplishment and a huge sum, but the collection did not begin with this noble gesture.

The idea, which was followed with action, was raised in the summer of 1857 by some middle-class people from Bogdány (today's Nyírbogdány, Szabolcs county), and developed into a national movement following Mór Jókai's article in the Magyar Sajtó. And in October 1859, the board of directors of the Academy decided to initiate a nationwide collection. In 1860, nearly three thousand signature sheets were sent out to various well-known people in the country who undertook the collecting work.

On the sheets, offers could be made for the building of the Academy and the increase of its share capital. In addition to Széchenyi and other famous people, the offerors included architect Miklós Ybl, who later - together with Antal Szkalnitzky - managed the construction of the Academy's palace. 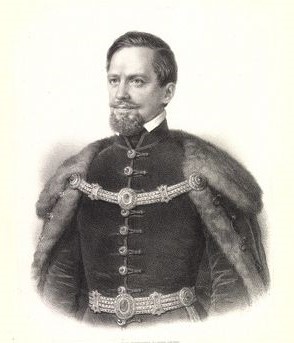 It was a significant help that in May 1860, the city of Pest, near the Chain Bridge - just north of the current building of the Academy - gave a plot of 1,300 acres, partly free of charge and partly at half price to the future building. Of course, the city made that a subject to conditions. On the one hand, the plot could only be used for the construction of the Academy's palace - otherwise, it would have returned to the city - and on the other hand, within four years from 1 January 1861, the plot had to have a permanent house with at least two floors. 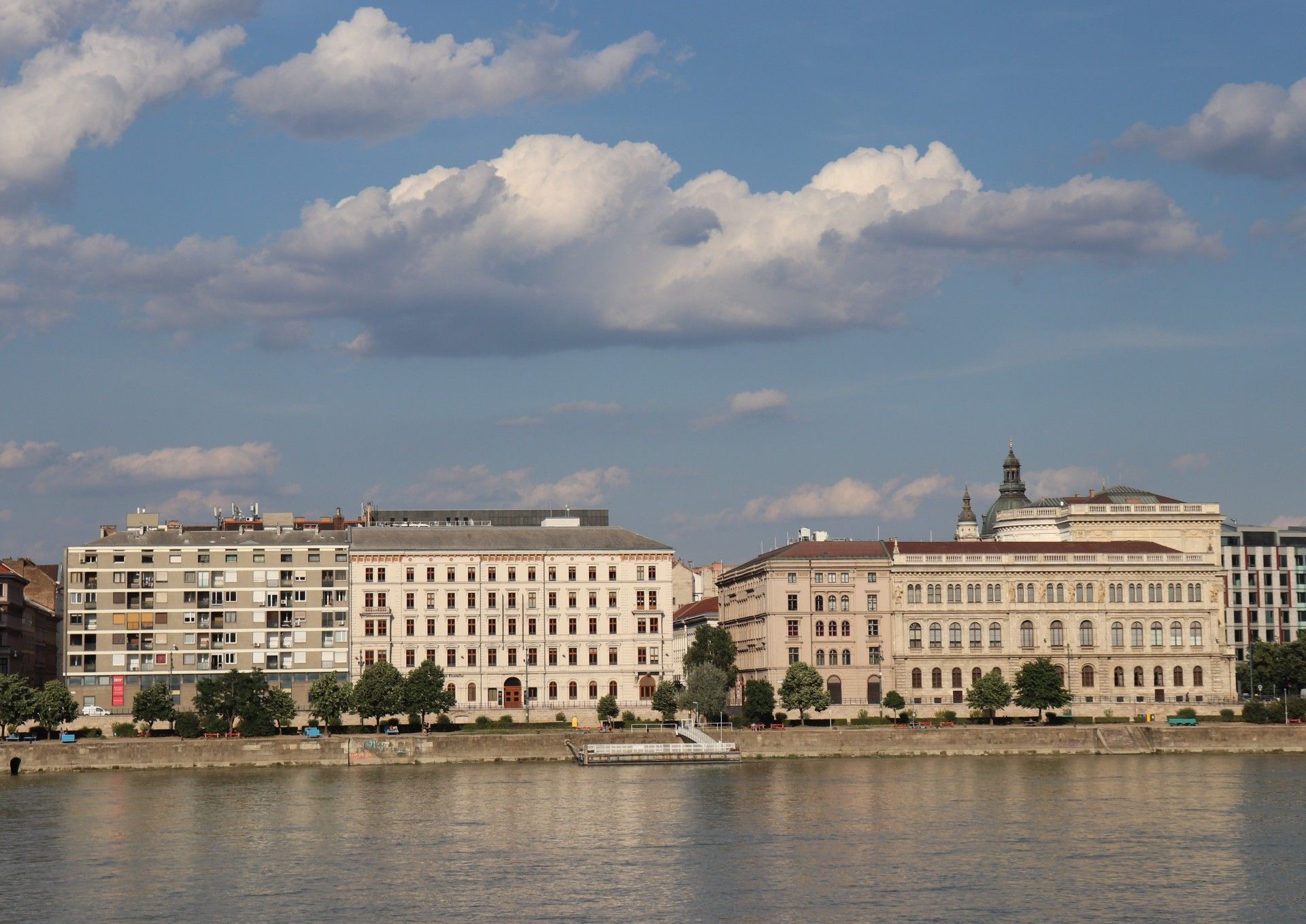 As the adjacent plot of land owned by the Danube Steamship Company, located south of the plot offered to the Academy, overlooking Kirakodó Square, was located in a much more advantageous position, Emil Dessewffy, the then director of the Academy, with the help of banker Mór Wodianer successfully achieved that the two building plots changed owners. This site exchange agreement, signed on 31 August 1860, allowed the Academy's palace to be built on its present site, on the north side of the Chain Bridge, on a plot overlooking Kirakodó Square, as planned by Berlin architect Friedrich August Stüler. 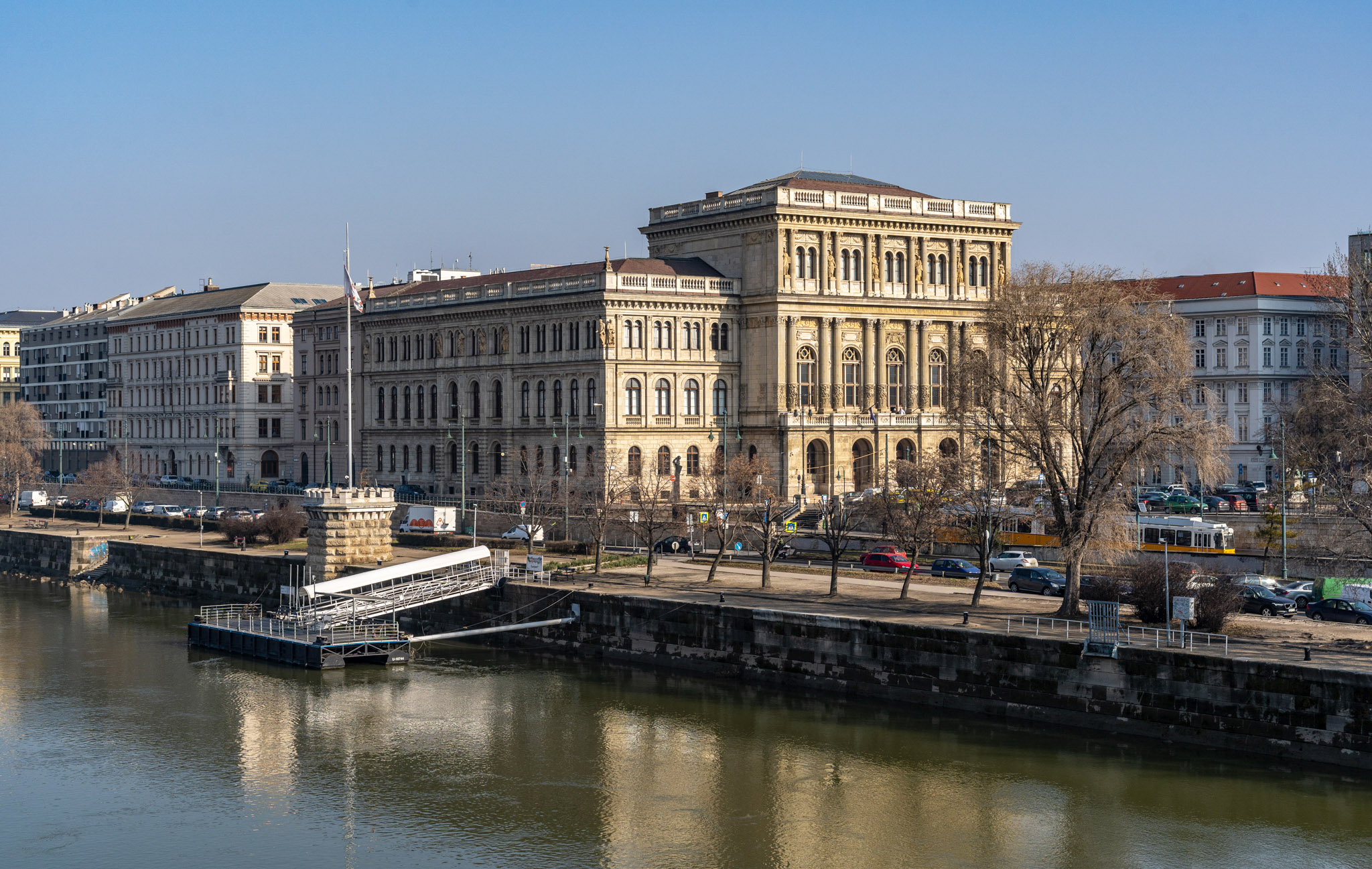 The Széchenyi Square Palace of the Hungarian Academy of Sciences (Photo: Balázs Both/pestbuda.hu)

After that, the first plans could be made in 1861, and then in the spring of 1862, construction began under the direction of Miklós Ybl and Antal Szkalnitzky. The first meeting in the Neo-Renaissance palace was held on 24 April 1865, but the grand opening was only months later, on 11 December 1865. 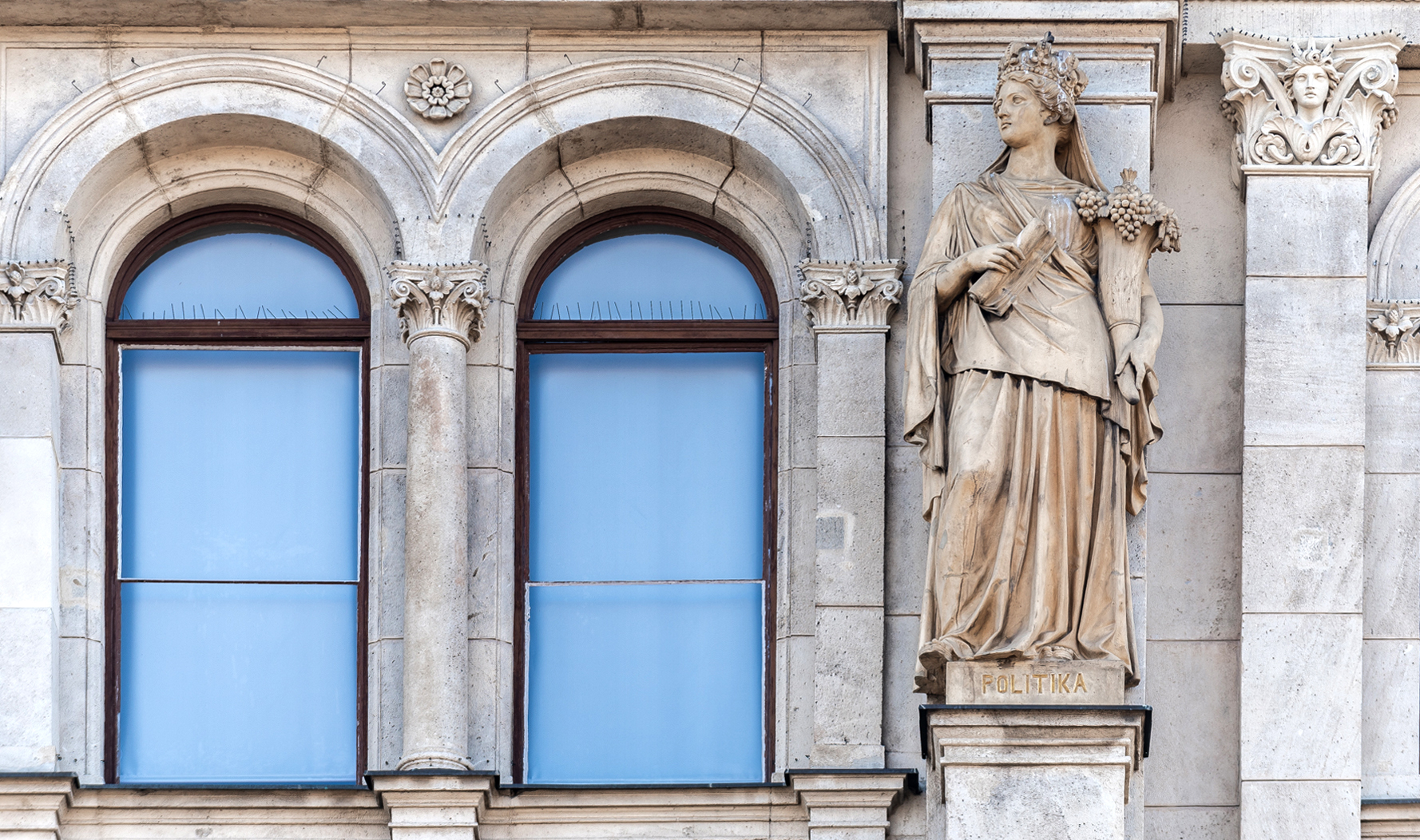 Female figure on the Danube facade of the headquarters of the Hungarian Academy of Sciences (Photo: Balázs Both/pestbuda.hu)

The palace of the Hungarian Academy of Sciences is now once again in the spotlight, as its renovation is about to begin. As it turns out from the announcement of The Public Procurement Authority of Hungary of 29 April 2021, the renovation of the headquarters and library of the Hungarian Academy of Sciences may be planned by the Public Building Planner PLC (Középülettervező Zrt.).