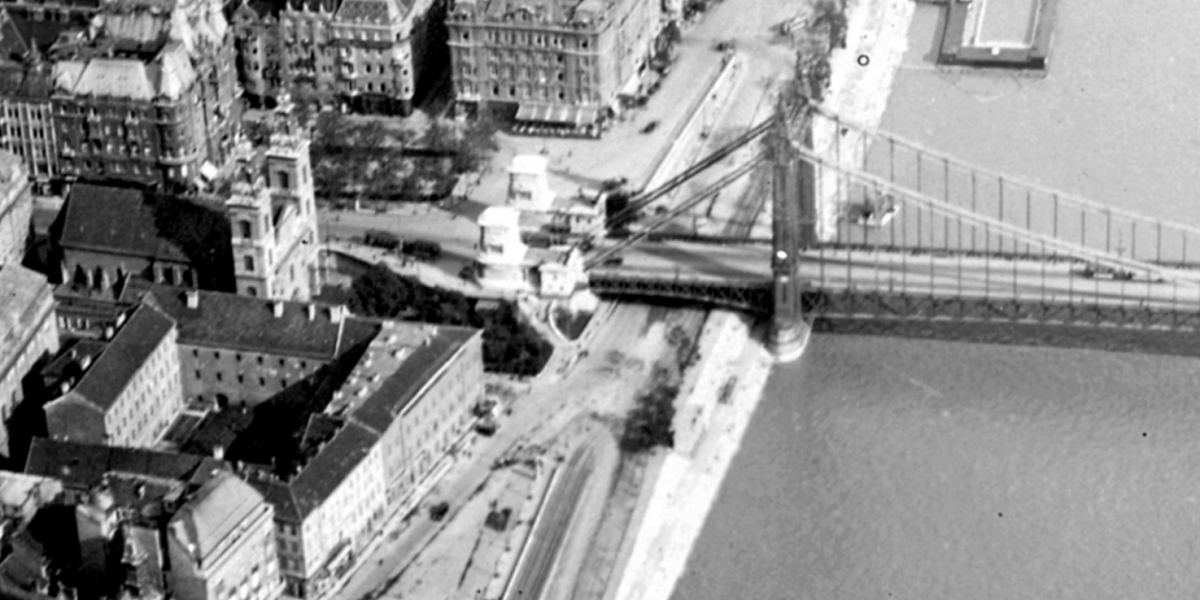 When the ramp of the Elizabeth Bridge was widened, moving the church also came up, in the end the sidewalk was lowered

In the 1930s, the car traffic in Budapest was already so high that the Pest bridgehead of the Elizabeth Bridge had to be rebuilt in order to avoid permanent traffic jams and the risk of accidents. Even the relocation and even demolition of the Inner City Parish Church was discussed, but instead the designers chose an imaginative and inexpensive technical solution. The new ramp of the bridge was completed on 17 July 1936.

When the Elizabeth Bridge was completed in 1903, it was the largest chain bridge in the world. But it was not only special in this: to build it, most of the then inner city of Pest had to be demolished. This was the only way they could build the Pest bridgehead and lead the Rákóczi Road, then called Kerepesi Road, to the bridge. Although the bridge not yet served national passing traffic at the time, only local one, but by 1936 it was already too narrow.

The original Elizabeth Bridge was narrower than the bridge rebuilt after World War II, visible today. Although its chains ran exactly the same as the current cables, originally the sidewalks were also inside the chains, unlike the current structure where they were located outside the cables. Therefore, the bridge used to have only two lanes per direction, plus the outer one was occupied by the tram. However, as traffic increased, traffic jams regularly formed at the Pest bridgehead, where the bridge was barely accessible from the Inner City Parish Church.

The picture taken in 1919 clearly shows the narrowing of the road at the Pest bridgehead (Source: Fortepan / No.: 27910)

The reason for this was that the Inner City Parish Church “intersected” the axis of the bridge, so here the two lanes, one of which also had a tram, merged and the traffic narrowed to one lane. As there was still left-hand traffic at the time, the narrowing of the road was a problem for those going to Pest. With higher traffic, significant traffic jams developed as cars and other vehicles used the same lane as the tram. In addition, this traffic situation was dangerous.

The bridge was not designed for car traffic either, since at that time, in the last years of the 19th century, the car only just appeared in Hungary. But by the 1930s, vehicle traffic had become significant in Budapest, which was increased by the handover of the Balaton motorway at that time, which projected a further increase in the traffic of the Erzsébet Bridge. 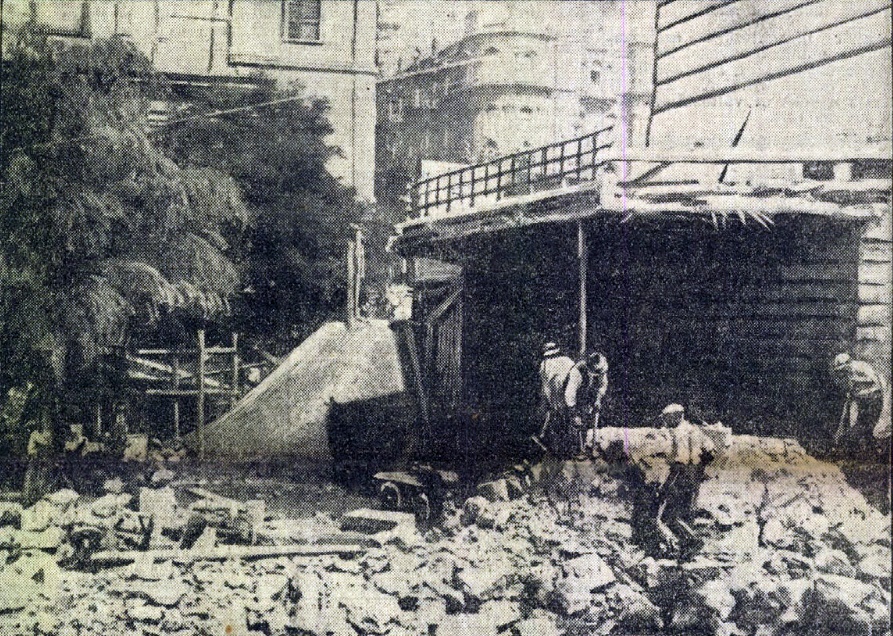 A solution had to be found to avoid traffic jams and the risk of accidents. The Budapest Public Works Council, the organization responsible for the development of the city, tried to create roads for the Budapest car traffic on which the traffic could move faster, as the spirit of the age dictated it. Therefore, it was natural that the Pest bridgehead, which was a bottleneck, should be rebuilt.

It was also suggested that the church causing the road narrowing be simply pushed away or demolished and rebuilt a little further away, but these ideas were eventually discarded. Rather, they resorted to a much simpler and cheaper solution. At the ramp of the bridge, the sidewalk on the side of the church was removed, and in its place a new, three-and-a-half-metre-wide traffic lane was created for the line of cars from Buda between the tram rails and the church wall. And the sidewalk was inserted into the gap that had existed between the bridge and the church until then. However, the new sidewalk was not designed at the same level as the roadway, but below it. A new staircase was also built for pedestrians, from where they could get to the Eskü Square, now called Március 15. Square. 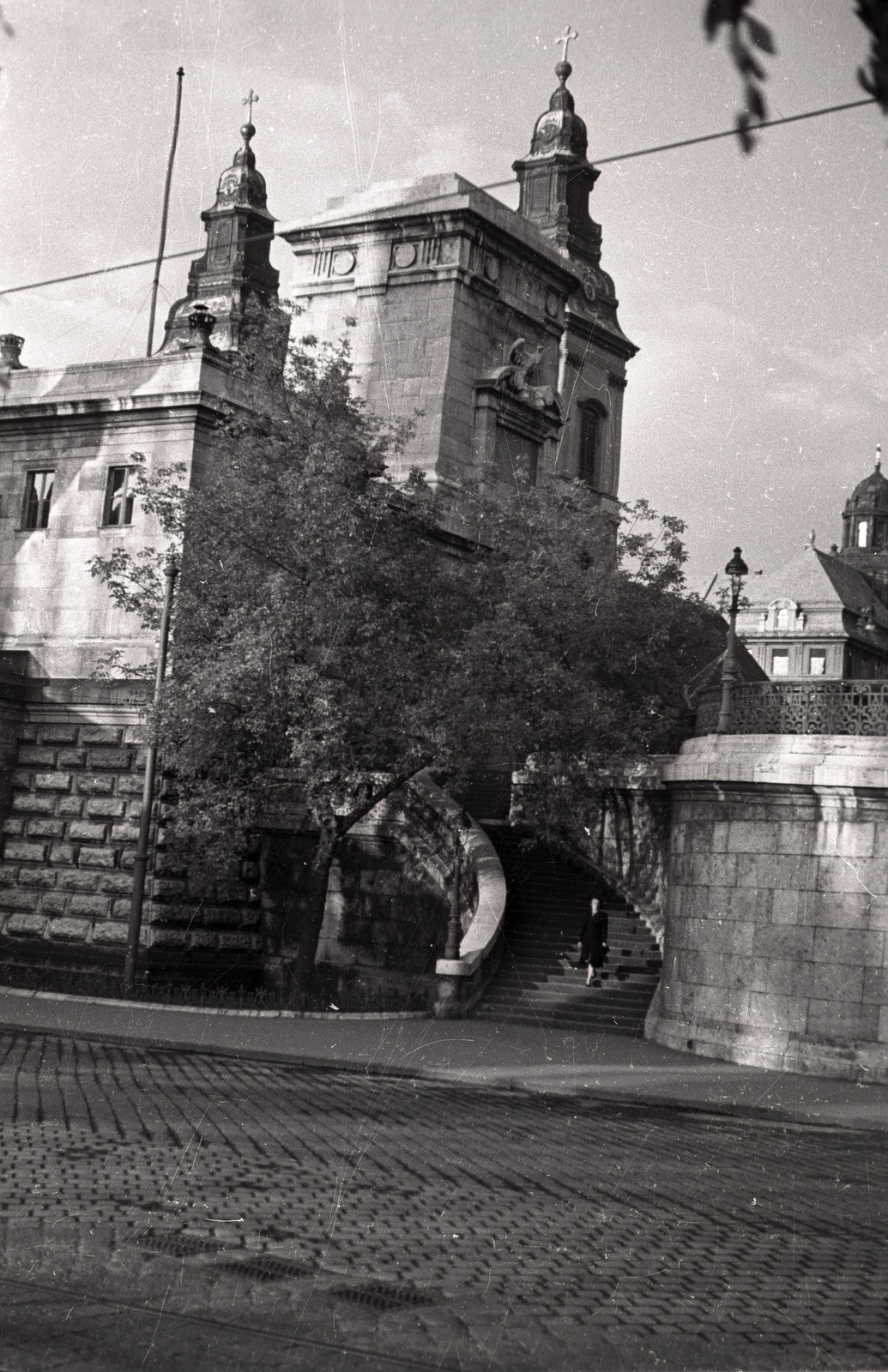 The new staircase on the south side of the Pest end of the Elizabeth Bridge (Source: Fortepan / No.: 128954)

Pál Álgyay-Hubert, Vice-President of the Public Works Council, the author of the plan, made a statement about the chosen solution in the 15 August 1936 issue of the Városok Lapja:

“The issue of solving the traffic problems here has dragged on for a very long time, and the debates have also been about moving or demolishing the church and rebuilding it in a more distant place. The solution now implemented does not affect the church and is the middle ground between the two extreme positions, one of which would have wanted to divert the pedestrian audience to a deep alley between the road and the church on two storeys, and the other would have built a new sidewalk at the height of the road on a console, which would have permanently obscured the church and its side windows as well. So this solution is really the best imaginable in the circumstances. ”

Experts also chose this strange, sunken solution because they feared that if the sidewalk were built directly to the church wall, it would transmit the vibrations of the bridge to the historical monument building and damage it. Nor was it incidental that the passer-by could get to the bridge without stairs. In addition, the redevelopment of the bridge ramp created a terrace at the end of the bridge with a fantastic view of Buda. 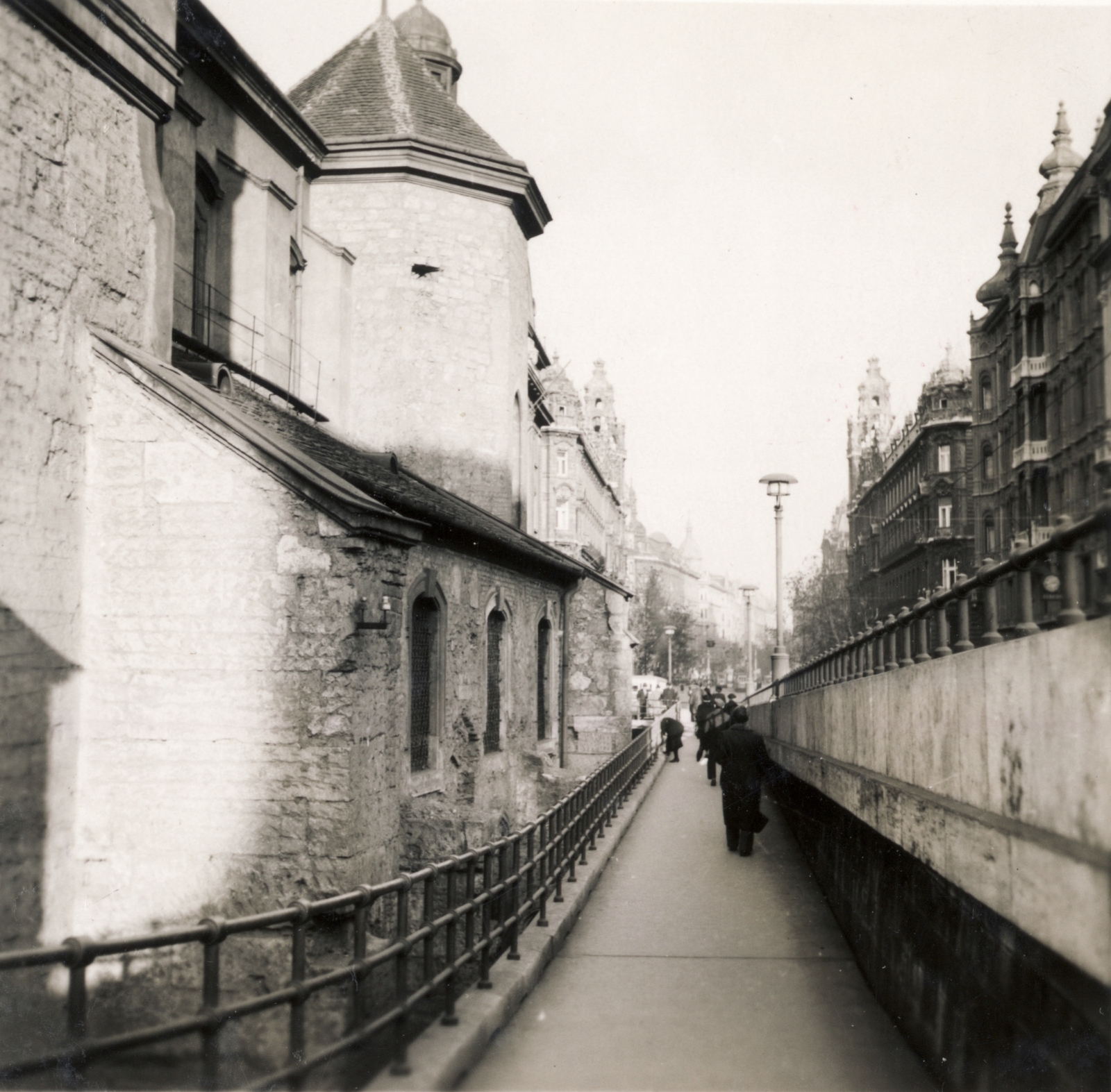 Of course, later, when they switched to right-hand traffic, the whole system had to be reorganized.

Unfortunately, the Elizabeth Bridge did not survive World War II, it was blown up by German troops. The newly constructed Elizabeth Bridge was already wider, but there, too, it was a problem to divert traffic next to the Inner City Parish Church. That’s why there are turns here all over the road today.