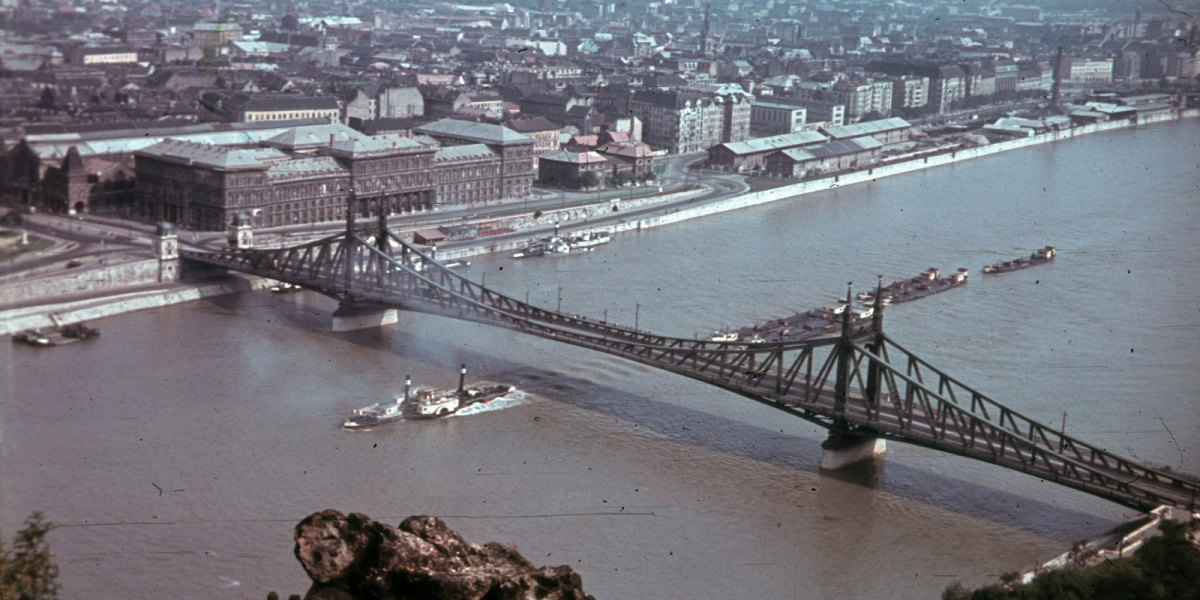 It was rebuilt, but its decoration and name were changed - the Liberty Bridge was handed over 75 years ago

At the end of the spectacular fireworks held in Budapest on the occasion of the founding of the state, glowing Greek fires were started on the bridges, including the Liberty Bridge. At that moment, surely few thought it was the first bridge to be rebuilt after the devastation of World War II and handed over to traffic on 20 August 1946.

During the siege of Budapest in World War II, in January 1945, the retreating German troops blew up all the Danube bridges, which were almost completely destroyed. However, there was one that also suffered serious injuries, but was not completely destroyed due to its special structure: the former Ferenc József Bridge, built in 1896 according to the plans of János Feketeházy. Although the middle of the bridge was destroyed, its gates and structures of Pest and Buda remained standing.

The former Ferenc József bridge was built as a so-called Gerber-girder (cantilever) beam bridge. This means that the bridge consisted of three interconnected parts. Out of the two gates — the high-extending steel structure — protruded the arms that formed the bridge itself. The arms extending towards the shore also reached the bridgeheads, here they also leaned on the bridgeheads, but practically only touched them. The same but slightly longer arms extended towards the Danube riverbed, but these two arms stretching towards each other did not meet. 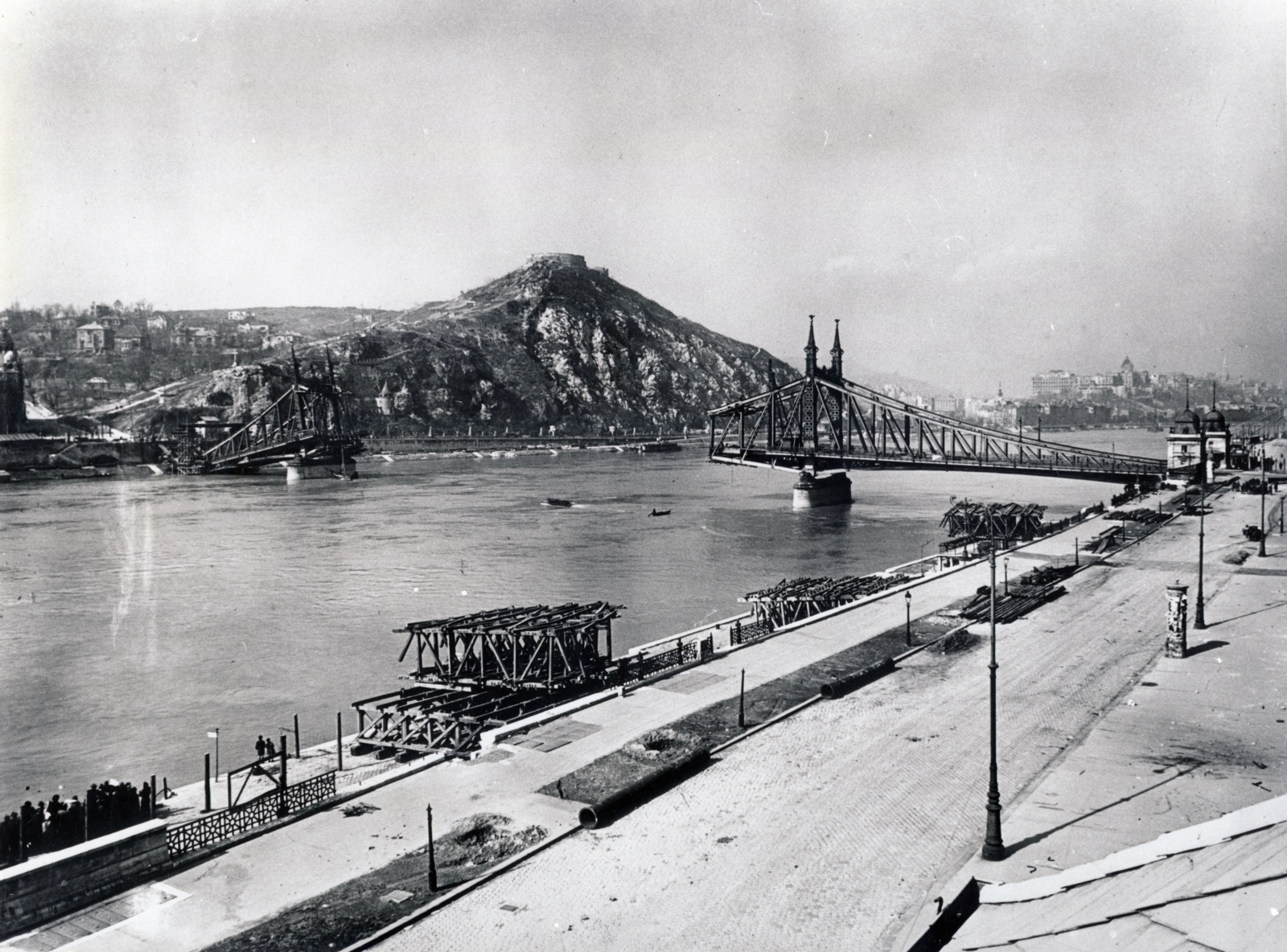 The exploded Ferenc József bridge in 1945. It can be clearly seen that the middle of the bridge was destroyed, but the gates and structures of Pest and Buda remained standing (Source: Fortepan / No.: 155561)

In order to prevent these two protruding arms from tipping into the Danube, the bridge was loaded with 609-609 tons of counterweight at the riverbank openings during construction. Between the two arms stretching towards each other, a third structure of nearly 50 meters was installed, which is held in place by four huge screws. Thus, with the center of the bridge blown up on January 16, 1945, the structure only tipped back; just as the seesaw tilts when a child sitting on one side gets off it.

On the remaining torso after the siege, Soviet sapper corps built a temporary structure, the center of which rested on pontoons. A minor accident occurred during construction: the already damaged bridgehead in Buda could not support the mass of the temporary wooden bridge and began to sag. This further deteriorated the condition of the bridge, but it was possible to use it as early as 15 March 1945. 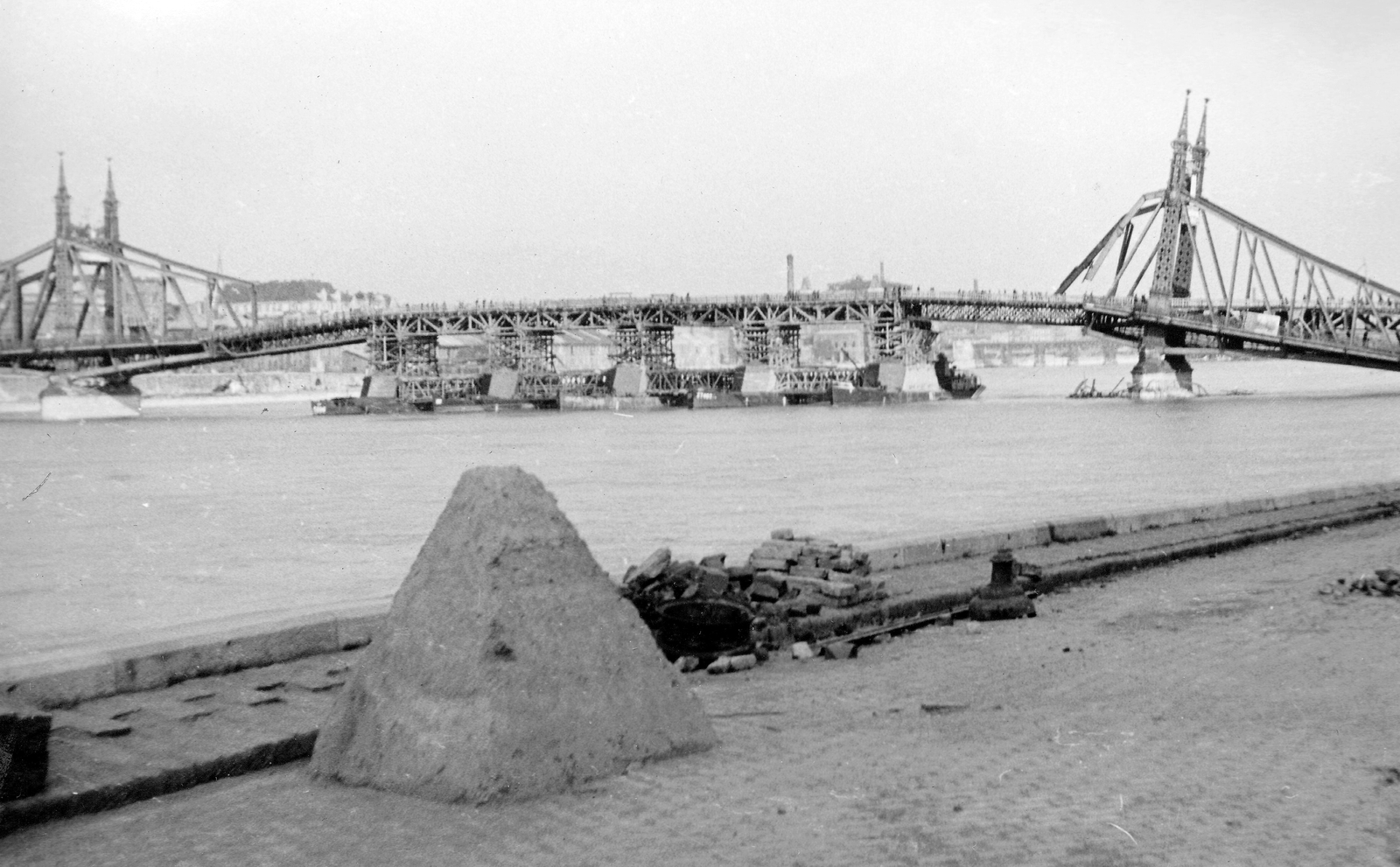 The temporary bridge was destroyed on 10 January 1946 by ice. However, when a week later, on 18 January 1946, the Kossuth Bridge between Kossuth Square in Pest and Batthyány Square in Buda was opened, the restoration of the former Ferenc József Bridge could begin.

MÁVAG tilted the tipped gates into place with huge hoists, and they began to rebuild the collapsed parts according to the plans made in 1894. Construction was significantly accelerated by the fact that the floating cranes were able to lift entire bridge elements of up to 50 tons at a time. The middle section of the bridge, nearly 50 meters long, which connects the section extending from the two gates, 120-tonne in itself, was lifted into place on 12 July 1946, by two floating cranes at the same time. 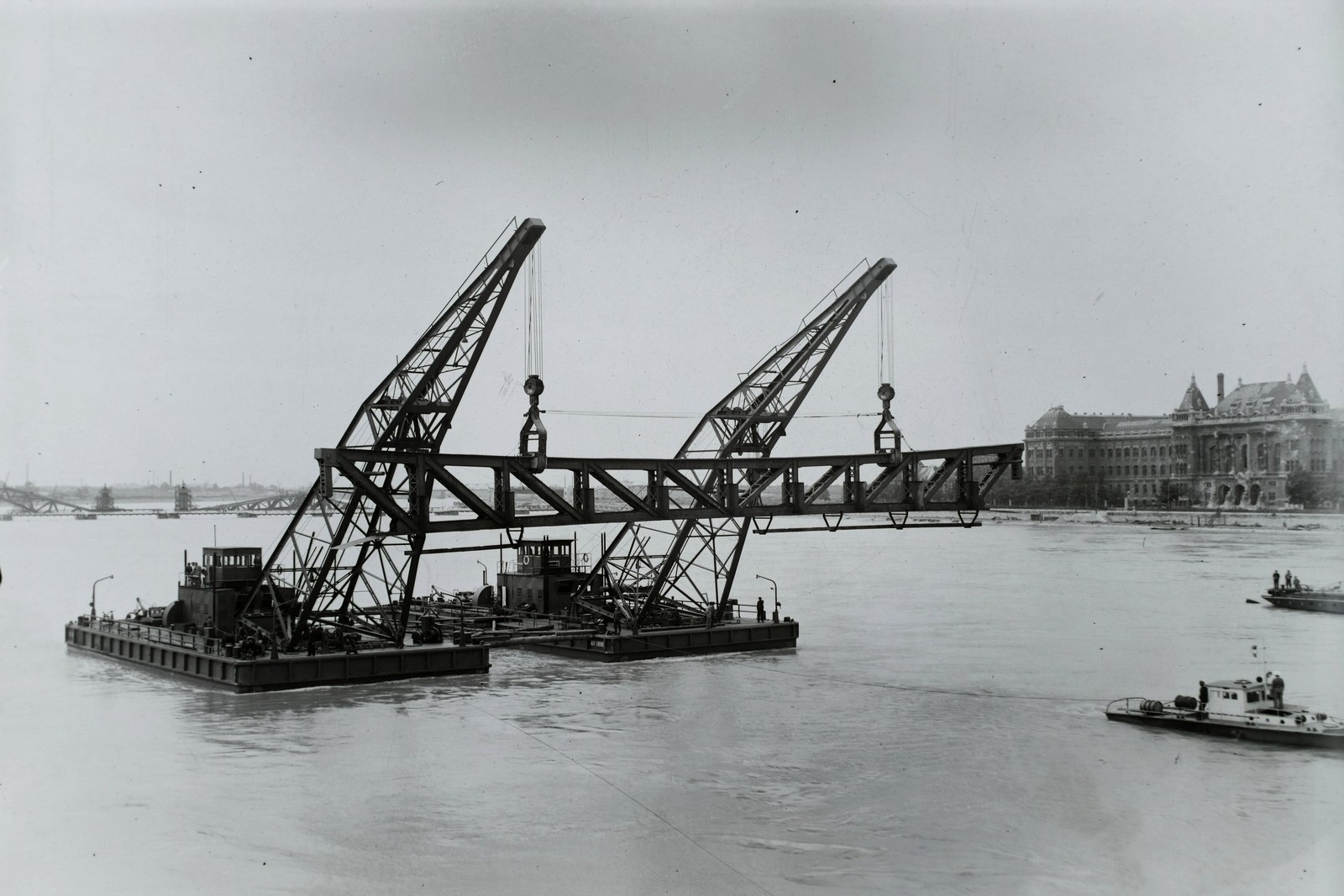 Construction of the central part of the bridge on 12 July 1946 (Source: Fortepan / Hungarian Museum of Technology and Transport / Collection of Historical Photographs / Ganz Collection / TFGY 2017.1.1105)

The bridge was originally extremely ornate: through the ingenious work of architect Virgil Nagy, it was a steel-lace “work of art” in which metal is not a building material to be covered, but an independent component with its own aesthetic value. Nevertheless, during the reconstruction, it arose that not only should the new parts be built unadorned, but also the old, remaining structures should be stripped of their decorative elements, stripped down into a simple, functional beam bridge.

Interestingly, this effort was opposed by Ernő Gerő, one of the most powerful leaders of the Communist Party, the then Minister of Transport. However, the bridge was not completely rebuilt in its original beauty: the coats of arms, the Holy Crown and the ornate lamps disappeared, and the railing in the middle was also simplified. The customs houses on the Buda side were also demolished. The bridge was painted bluish gray instead of its original green color.

The work proceeded with incredible speed: six weeks after the installation of the central structural elements, the bridge had already been completed, and was handed over on 20 August 1946, as part of a huge ceremony. That's when it was named the Liberty Bridge. 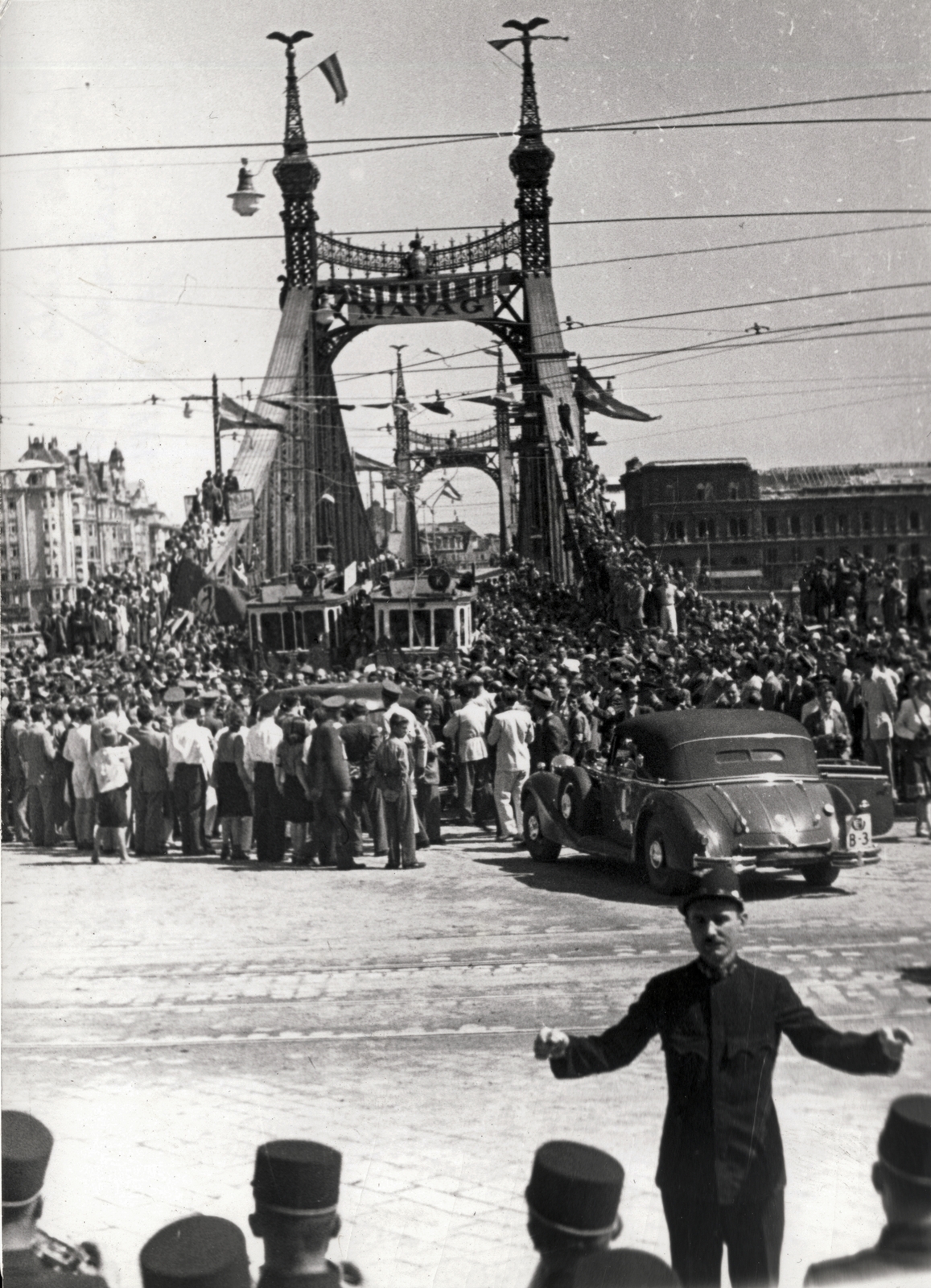 Handover of the bridge on 20 August 1946. The tram rails were also restored, ie tram traffic could start between Buda and Pest (Source: Fortepan / No.: 211075)

However, the rushed work came at a price. Since the iron material was obtained in part from the wreckage of the other bridges, no one really knew what quality materials were being installed. This caused problems with subsequent maintenance. The situation was exacerbated by the fact that road salting also began in the 1960s. Therefore, in order to reduce the load on the bridge, it has even been suggested that tram traffic should be eliminated.

The bridge was eventually renovated in two stages, between 1980-1982 and 1984-1986. It was then painted green based on the colour swatch found on a part of the bridge which was intact since 1896. At the handover in 1986, the people of Budapest and the leaders of the country were greeted by an unexpected picture: the historical coat of arms were returned to the bridge, and the Holy Crown - although painted green - onto the gates. This was decided by the leaders of the construction of the bridge - primarily engineer Tibor Dalmy - taking advantage of the loophole of the monument protection regulations. The decree stated that if there was a coat of arms on a listed building, it had to be replaced. However, the regulation was no longer about what coat of arms it should be.

The bridge was last completely renovated between 2007 and 2008. At that time, not only was its structure reinforced, but all the original decorations were restored: the railings, the candelabra, were all made in their original form. They also replaced the silver rivet, with the insertion of which the bridge was handed over by Ferenc József on 4 October 1896.