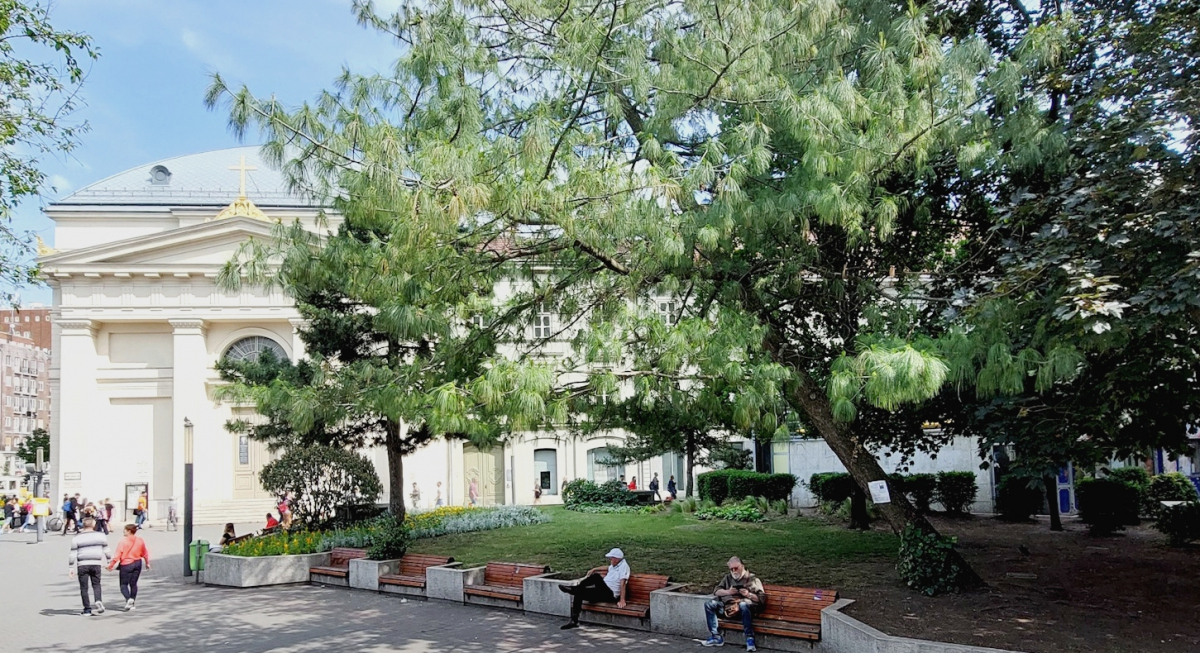 " We say goodbye to a botanical curiosity," writes Főkert Nonprofit Zrt. From the news we learn that in the Deák Square, near the Lutheran church, there is now a heavily tilted pine tree (Pinus wallichiana) in the Himalayas, the condition of which has deteriorated so much in recent years that it has become dangerous, so unfortunately it has to be cut down.

As they put it, the Himalayan silk is a tree with an extremely decorative canopy, its long gray-green needles hanging softly from the branches, the canopy widening nicely as the tree grows. It grows relatively quickly, but it also causes loss in many cases because under urban conditions, the roots cannot follow the growth of the crown and after a while they cannot keep it. 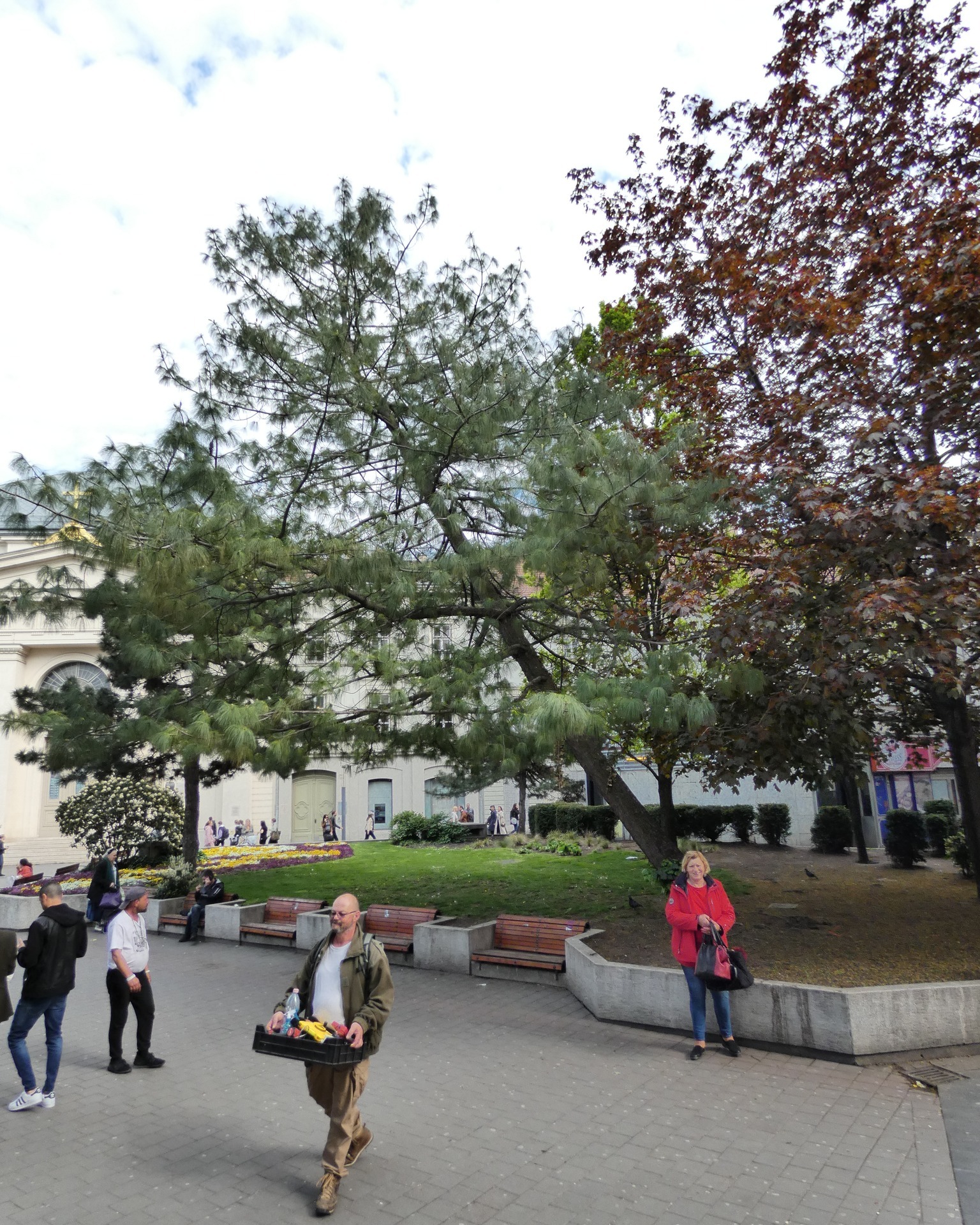 It is also revealed from the Main Garden website that this tree fell in a storm in 2013 and its roots weakened. It was then fixed to the nearby early maple with a dynamic bond to prevent it from falling out completely, however, the ruptured root could not hold the crown with this help either. The silk pine continued to lean, the support rope tensed dangerously, and the trunk began to crack in length. It is feared that if the rope is damaged, the wood will fall on the sidewalk, they write.

Since it is not possible to professionally secure the tree with a new dynamic bond or shorten the crown, unfortunately it is not possible to save this pine, it must be cut down so as not to cause an accident. The usual zoological examination was also carried out at that time, according to which there is no obstacle to the removal, the horticultural company said. 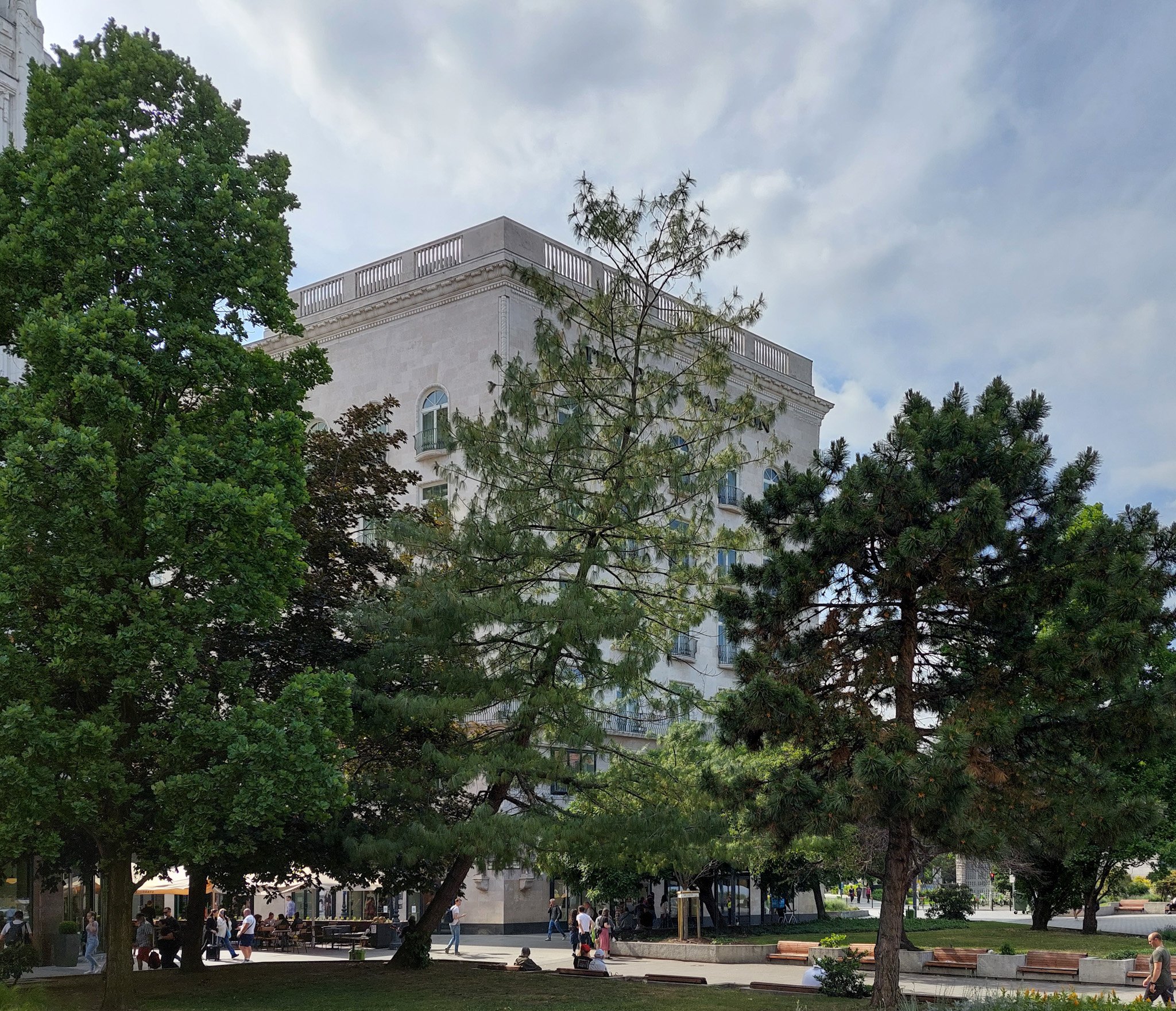 The Himalayan silk pine fell in a storm in 2013 and its roots weakened. The picture was taken on 24 May, 2022 (Photo: Both Balázs / pestbuda.hu)

During the news on the Main Garden Facebook page, several people asked why it was not possible to support the tree instead of cutting it. The Main Garden replied that it used to use this option where possible, such as the iconic acacia tree in Széchenyi Square or the oldest strawberry tree in the country in Tabán. “Unfortunately, pedestrian traffic under the tree doesn’t allow that here. As you can see in the picture, the tree is tilted in the direction of the sidewalk, so the support should be applied from this direction as well, but this is not possible to our greatest sorrow, ”the Main Garden said.

As an explanation, they added that due to the stable support and side support, one of the “legs” of the support should be in the middle of the pavement. Therefore, this solution is not feasible. However, according to the information provided by the Main Garden, the tree cannot be transplanted either, because it is located above the metro floor, so it would not be possible to remove it from its place without serious damage to the roots. But the size, dimensions, and physical condition of the tree do not allow for transplantation either. 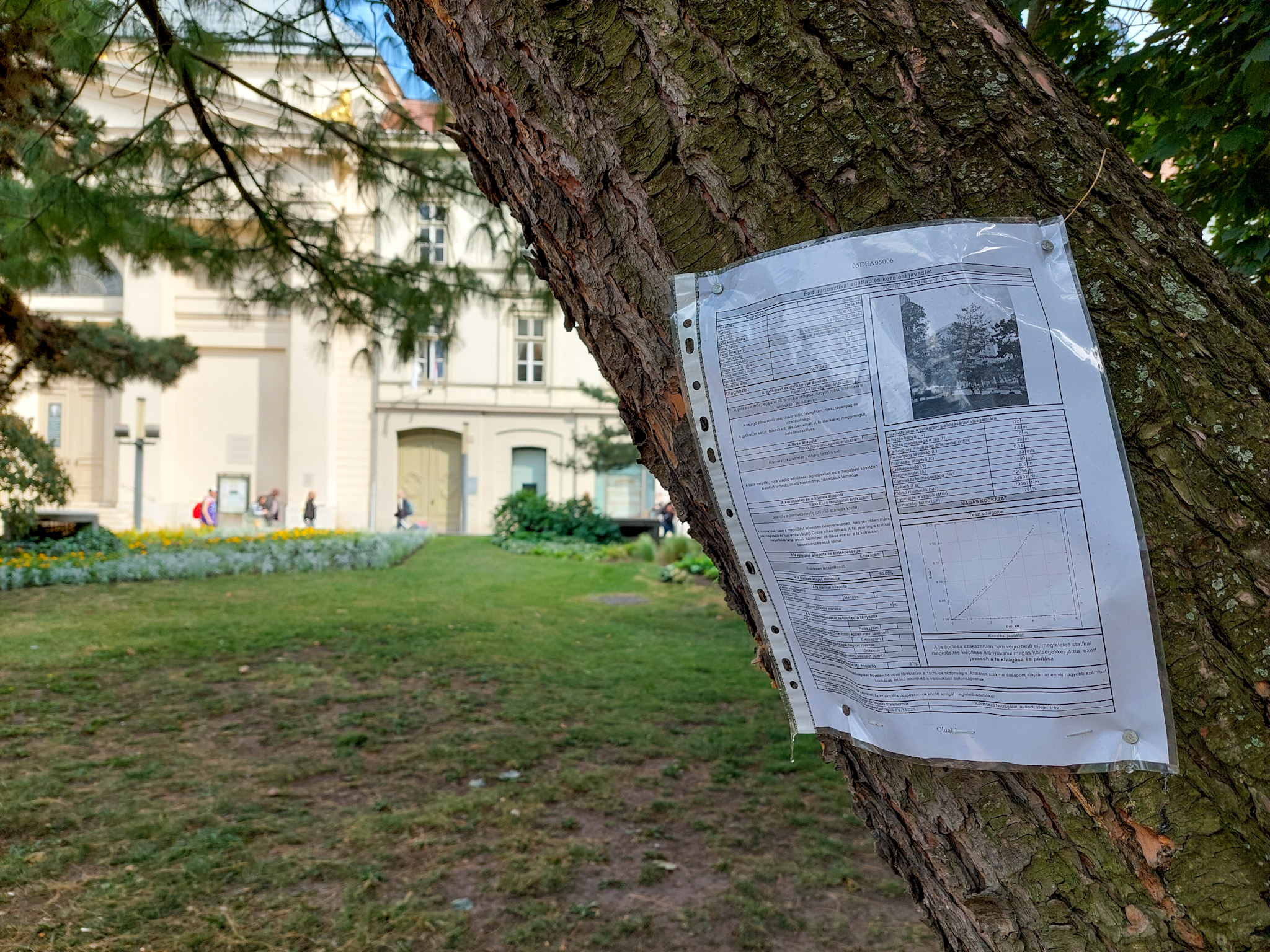 The diagnostic data sheet was posted on the trunk of the tree already last week (Photo: Both Balázs / pestbuda.hu)

Exactly on what day it is expected to be cut has not been announced. Those who walked on Deák Square today could still see it in its place and read the tree diagnostic data sheet posted on their trunk last week. We can also find the following data: the height of the tree in Deák Square is 12 meters, the height of the trunk is 3.5 meters, the diameter of the trunk is 36 centimeters, and the diameter of the crown is 8 meters.

And we can also face the diagnosis: “The roots are damaged, torn, partially dead. The wood is statically weakened and can cause accidents. ” "The trunk is tilted, with minor damage and longitudinal cracks, and the tree is currently supported by static reinforcement." And the treatment proposal: "Caring for the tree cannot be done professionally, building an appropriate static reinforcement would be disproportionately costly, so it is recommended to cut the tree:"

The Főkert promises that a new tree will be planted in its felled place within a year. 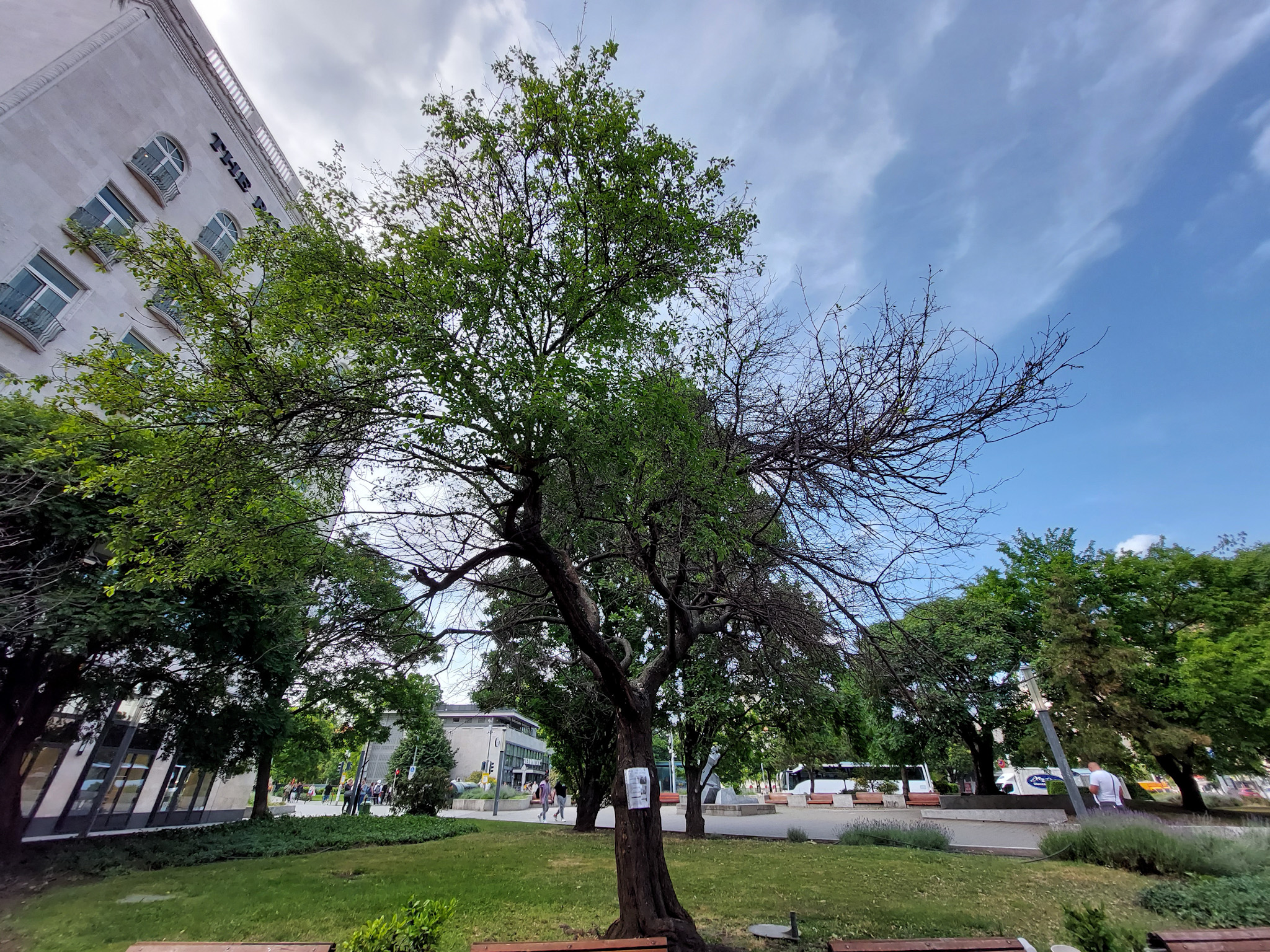 Another tree was marked in Deák Square (Photo: Both Balázs / pestbuda.hu)

We also found a tree diagnostic data sheet on another tree near the Himalayan silk pine, also in Deák Square. It is a cherry plum that says the tree is rotten, dangerous to accident, so it needs to be cut down.