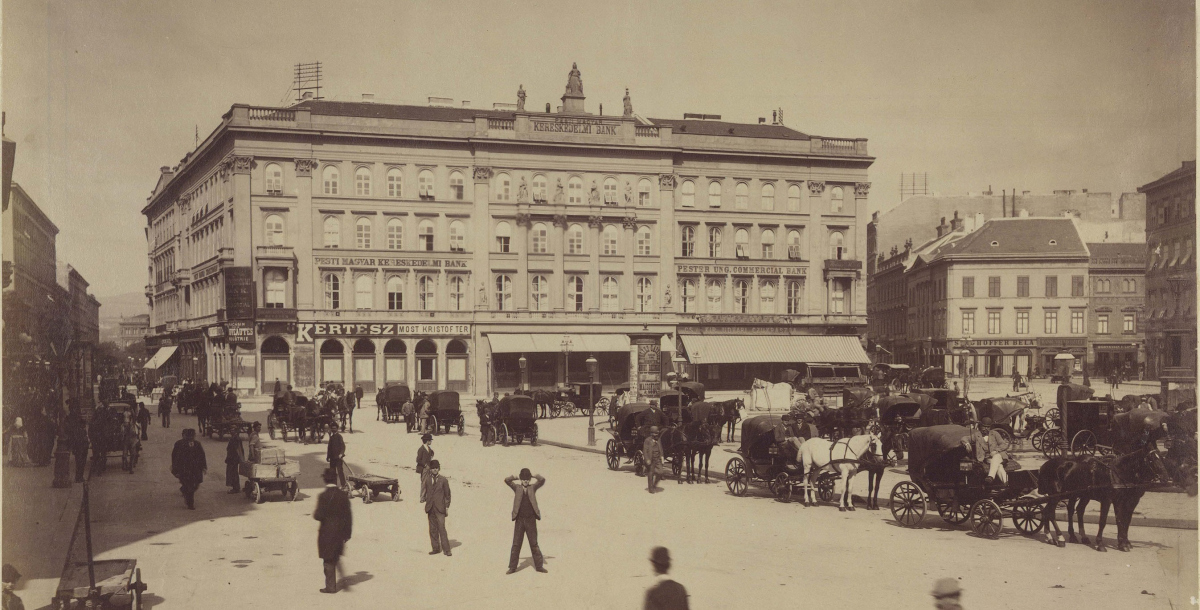 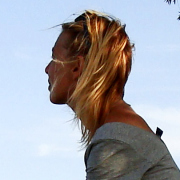 Between today's Vörösmarty Square and József Nádor Square, on the site of the Gerbeaud confectionery and its surroundings, there was a very valuable plot. 240 years ago, the Thirtieth Office (Customs House) was built here, which was considered old-fashioned and demolished after 70 years. After that, several people wanted to use the area: Count István Széchenyi would have built the National Casino, the city of Pest would have built the new town hall on the site. The plot was finally divided into four parts in the 19th century. The houses built here still stand today, valuable pieces of the architectural heritage of the inner city.

The Thirtieth Office in Pest was built on one of the most valuable plots in Lipótváros at the end of the 18th century, between today's Vörösmarty Square and József nádor Square. Until the end of the century, only smaller treasury buildings stood on the plots, but as the region began to develop, the area became more valuable. The construction of the Thirtieth Office (a royal office that collected and managed the public revenue called the Thirtieth) began in the early 80's of the 18th century. The surviving drawings and engravings help a lot in determining the date. A scenery from the 1760s and 1770s shows the former Sóház [Salt House] and a colonnaded house next to it, but the Thirtieth Office building is not shown. There is a well-known cityscape from 1781, drawn by Péter and József Schaffer, in which the area looks quite different, with smaller houses and buildings in front of the Váci gate. So at that time the works had not yet begun.

At the same time, from 1783 onwards, there were surviving documents on the circumstances of the construction, and from the summer of 1783 onwards, a number of documents concerning the redesign and completion of the house had been preserved in the records of the chamber architect József Tallherr. The foundation stone was laid after 1781, probably in 1782, according to these materials.

Art historian Márta Nemes explains in her research published in 1984 (A pesti Harmincadhivatal [Vámház] és a Gerbeaud építéstörténete [The Thirtieth Office of the Pest [Customs House] and the history of construction of Gerbeaud], Ars Hungarica 1984/1) that József Jung first worked on the site, the construction was started according to the plans of József Jung. József Tallherr visited the area in August 1783, and then asked the chamber for a 200 HUF advance payment for the works. Jung designed a U-shaped wing of the building, but Tallherr turned it into a built-in courtyard solution. We don't know why the design was handed over to Tallherr from Jung.

We were left with three floor plan versions, but customers were not happy with any of them, and even severely criticized Tallher for several reasons (such as not building a basement to increase storage space), but he shifted responsibility to the plan copiers and referred to time constraints. Nevertheless, he was able to continue the work with modifications, and the Thirtieth Office was completed in 1783. 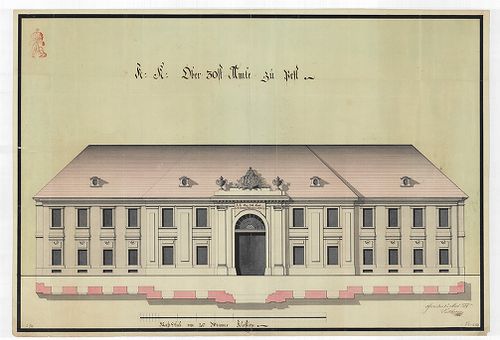 The one-story building was somewhat classicizing in the late Baroque style. While the windows towards today's Vörösmarty Square and Dorottya Street faced regular distribution, the façade was equipped with asymmetrically distributed openings towards József nádor Square. There were service apartments, warehouses, and offices in the vaulted spaces downstairs. Its gate, held by Ionic pilasters, was remarkably beautiful. The cantilevered main ledge above the entrance with its two vases, including a huge coat of arms, could also have been spectacular.

In the meantime, the area was built up: in 1812, the classicist-style, three-storey building of the Pest City German Theater was built in Gizella Square (Vörösmarty Square), behind the Vigadó plot, and then the Magyar Király Szálló was completed in today's 2 Dorottya Street. The Thirtieth Office fell into the shadow of these buildings, becoming insignificant, old-fashioned. At the same time, it occupied one of the most valuable sites of the area.

Already at this time it was suggested that the office be moved from the square, first to the plot at 3 Vigyázó Street today, but this was rejected by the chamber. István Széchenyi found the area suitable for the Palace of the National Casino, which was then located at 5 Dorottya Street. He wanted to buy it in 1833, and then made the plans with József Hild in 1836. Hild would have placed a store on the ground floor, the casino on the first floor, and the accommodations on the second floor. 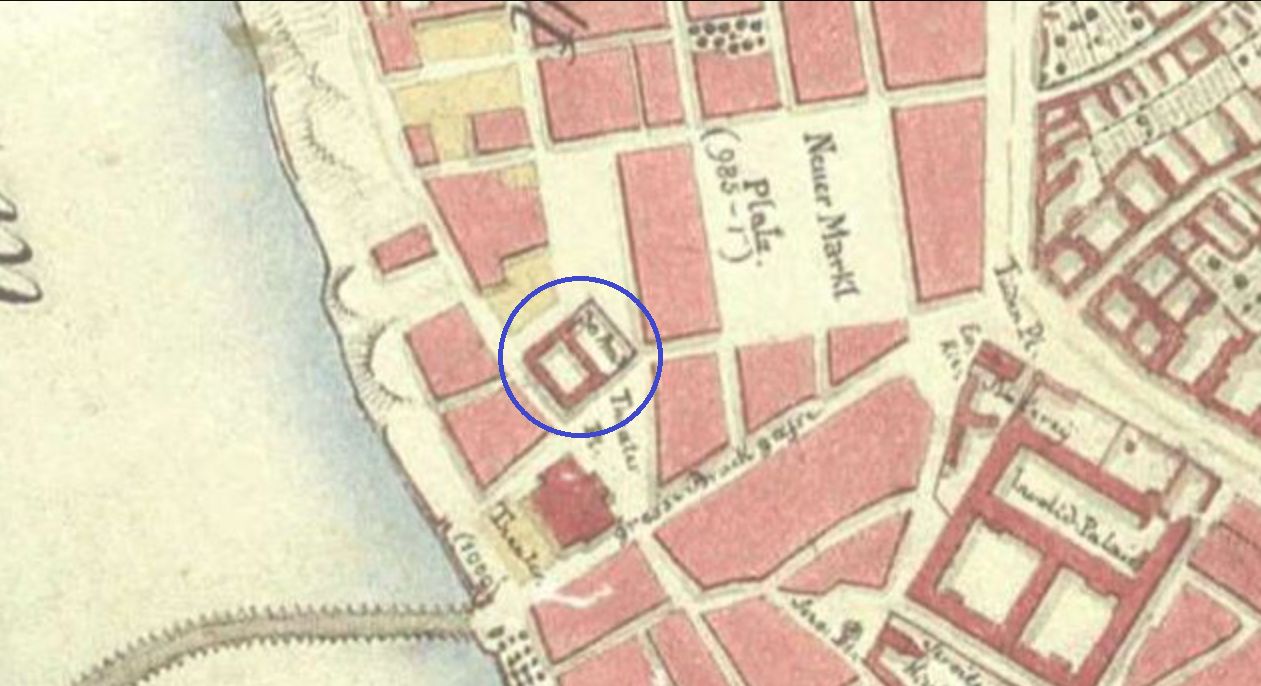 The area of the Thirtieth Office is marked in blue on the map of Pest in 1820 (Source: Hungaricana)

With this move, the Thirtieth Office would have ceased to exist at its former place. The city administration was also considering relocating the office because the location seemed appropriate for the construction of the new town hall. Presumably, Széchenyi suggested that the office continue to operate in a new building in the middle of today's Széchenyi István Square. This would not only have emptied the area, but would also have facilitated water-borne trade.

However, the palatine did not agree with this location. A committee was set up to designate the place, of which Mihály Pollack was a member, who made multiple plans for the new customs house in 1836-37, one multi-storey and two single-floor variations. Márta Nemes believes these plans are outstanding pieces of Pollack’s work. 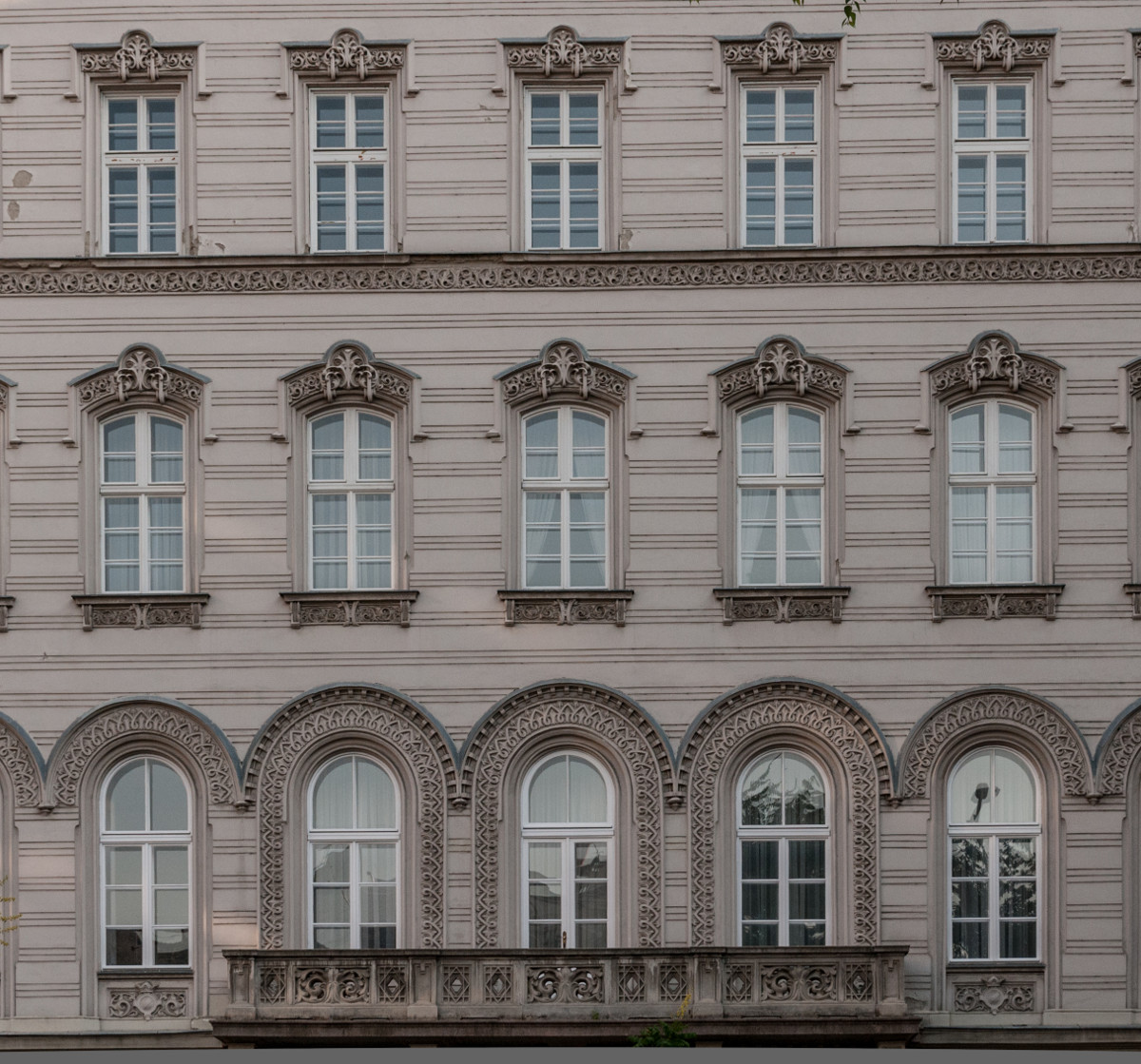 According to the research of Márta Nemes, since there was a disagreement between Széchenyi and the city magistrate over the plot, the count from Vienna asked the king for permission to buy. The magistrate vetoed it. The casino eventually moved to the Hild Palace on the corner of Kossuth Lajos (then Hatvani) Street and Szép Street.

The issue of maintaining or dismantling the Customs House was not resolved in the 1840s and was not discussed until 1856 due to the outbreak of the War of Independence. The house was finally demolished in 1859, but due to lack of money, the relocation and investment of Tömő Square, which had already been planned at that time, failed. The office gained its final seat between 1870 and 1874, in the huge building of Corvinus University today, originally designed as the main customs house.

The council divided the vacant area into four plots and auctioned them out. The new owners registered in 1860: 1 Dorottya Street - two plots were registered for this address, one was the Hungarian Commercial Bank of Pest, the other was Adolf Eisele; 5–6 József Square became the property of Professor András Kovács-Sebestyén; Döme Anasztáz Lyka became the owner of 3 Dorottya Street.

The head of the Commercial Bank initiated the construction of a single building in the area, so a tender was issued for the construction of the entire block. Three architects were invited to make the plans, but it was not clear from the article in the Budapesti Hírlap published in early July 1860 who the invitees were, the journalist only presented the plans of architects Gerster and Frey as the most likely. The owners eventually abandoned the idea of a single installation and everyone designed a separate building.

The originally a three-storey, historicist-style building complex at 7–8 Vörösmarty Square was built by the Commercial Bank and Eisele Adolf according to the plans of József Hild. At 5-6 József Square was the Kovács-Sebestyén House, which Mónika Pesti mentions as the main work of Hugó Máltás in the study of the Lecner Center. In 1922, Béla Barát and Endre Novák designed a fourth floor for the three-storey building. This house is the northern neighbor of the Gerbeaud House.

Dénes Lyka also asked Hild to design the house at 3 Dorottya Street, who designed a tenement house with a cross-vaulted gate in its courtyard. Although the construction of the four plots was not uniform, the two buildings bordering Vörösmarty Square to the north showed a completely uniform facade. In 1866, the Vasárnapi Ujság welcomed this house as one of the most important sights of Pest.

Then another chapter in the history of the area began: after Eisele sold his part to Trieste General Insurance Company in 1876, Emil Gerbeaud bought it from them in 1892. Gerbeaud also bought the property owned by the bank in 1910. By this time he was already running the confectionery taken over from Henrik Kugler, which he operated in the building complex.

According to the story also described on the website of Gerbeaud Confectionery, from 1908 the confectionery continued to operate under the name Kugler utóda Gerbeaud Rt. [Gerbeaud the successor of Kugler]. On 9 May 1911, Emil Gerbeaud applied to the council for the amalgamation of the land, which they approved on 1 June. In 1912, Sándor Fellner built a fourth floor for the building complex, which is mostly in the historicist-Art Nouveau style. Gerbeaud also bought the house at 3 Dorottya Street in 1914.

Gerbeaud was nationalized in 1948, operated under the name Vörösmarty Confectionery until 1984, and has been privately owned since 1995. The tenement house at 3 Dorottya Street is still a residential property, it was modified and then restored in 1955 according to the plans of Dénes Romárik. At 5-6 József nádor Square the Kovács-Sebestyén House operates as an office building, it is a protected monument, registered archeological site and one of the outstanding works of Romantic architecture.