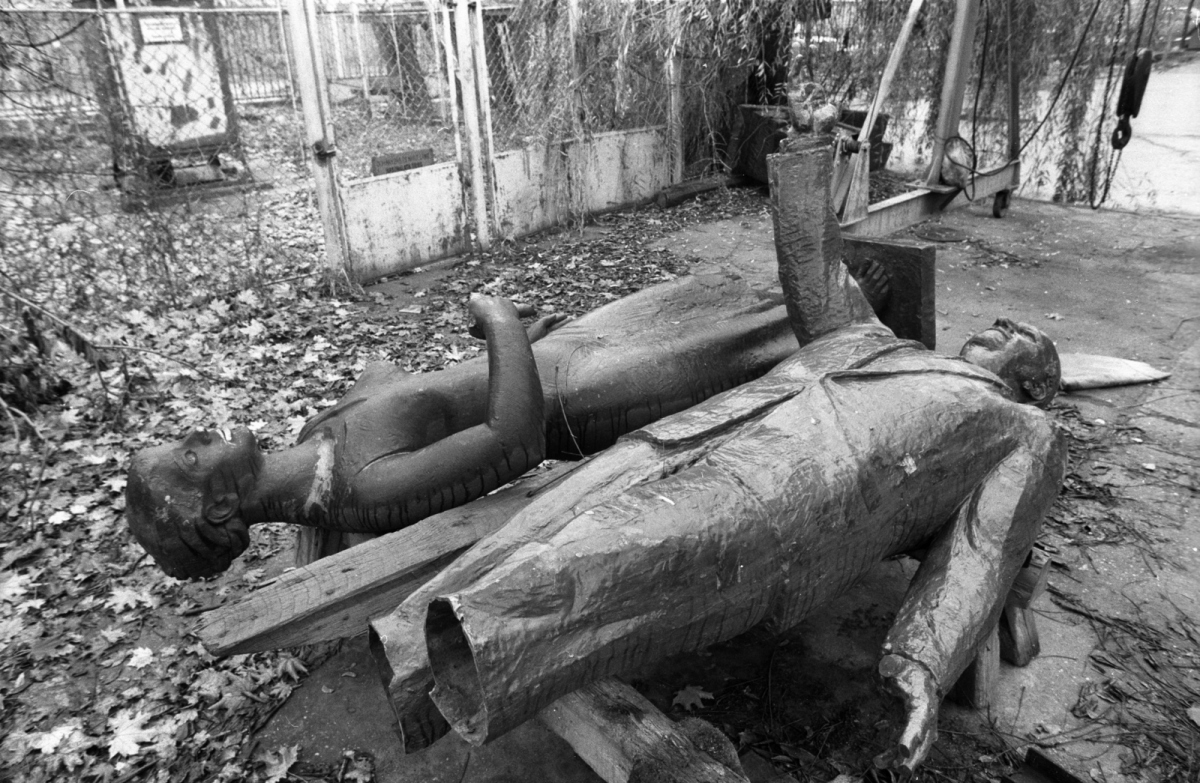 Monuments of the socialist era were dismantled 30 years ago

Thirty years ago, the removal of statues associated with the previous regime from Budapest's public spaces began. The monuments erected during the socialist era, including the statues of Marx and Engels, Lenin, and Béla Kun, were transported to the sculpture park created in the 22nd District, where they can still be seen in an open-air exhibition ever since.

At the time of the regime change in 1990, these statues were not welcomed by the new city and country administration. Day by day, it became more and more uncomfortable to look at the figures of those people on the huge pedestals, whom the dictatorial and oppressive rule set before the members of Hungarian society as examples to be followed. 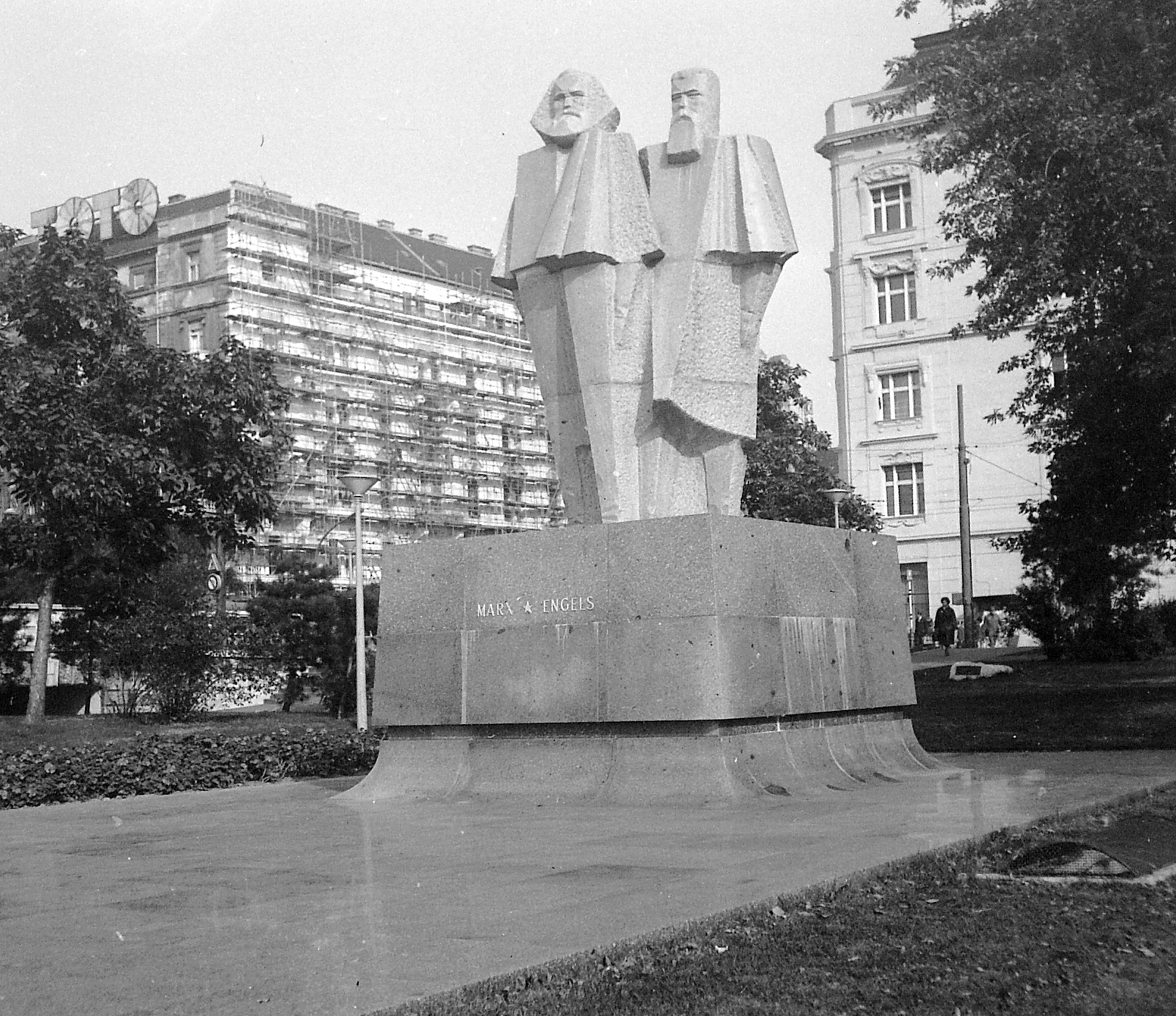 The statue of Marx and Engels stood on Jászai Mari Square (Photo: Fortepan/Reference No.: 1978) 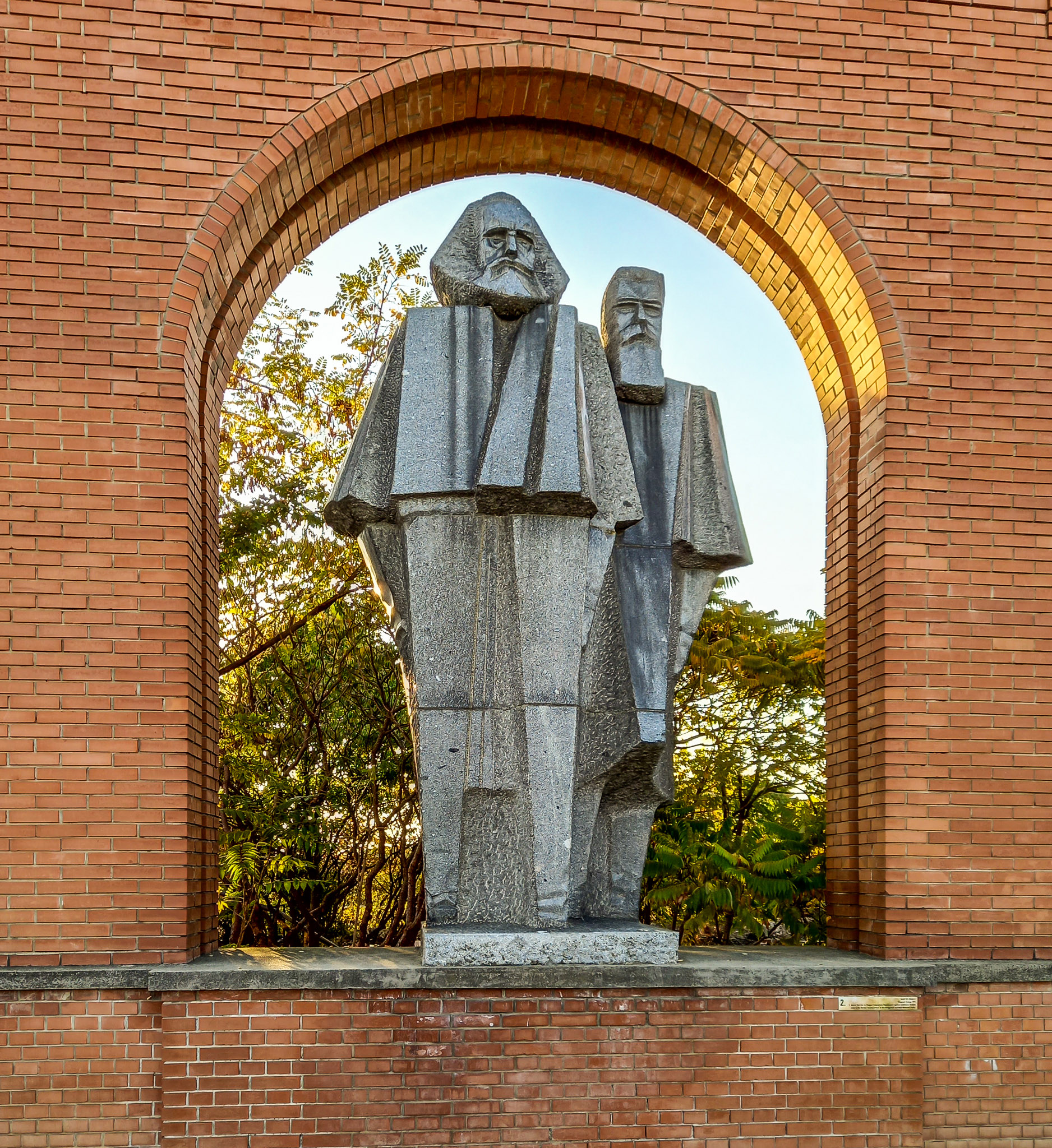 That sooner or later something had to be done with the statues was already evident in 1989, academic László Szörényi proposed the creation of a Lenin garden in the 5 July 1989 issue of the journal Hitel, and he thought it should be created in Csepel:

"What should we do with them? Sooner or later they will make everyone uncomfortable. I do not think they should be melted down like Görgei's statue for Stalin's. I do not recommend their bronze for bell casting either, I do not think about Áron Gábor's idea either. However, there is one place in the country where it cannot be denied that they belong to the genius loci. This is Csepel, where, on the one hand, greasy bread was pressed into Lenin's hand standing in front of the factory, and on the other hand, there is a monument in the form of a transmission tower to commemorate the exchange of marconigrams between Lenin and Béla Kun. Surrounded by pretty hedges, arranged along labyrinth paths, they should all be set up there. Visitors of the 1995 World's Fair would flock to see the world's first Lenin Garden. They would pay. Even in hard currency.”

In January 1991, the General Assembly of the Capital invited the leadership of the Budapest districts to propose which statues, plaques, and monuments they wanted to remove. 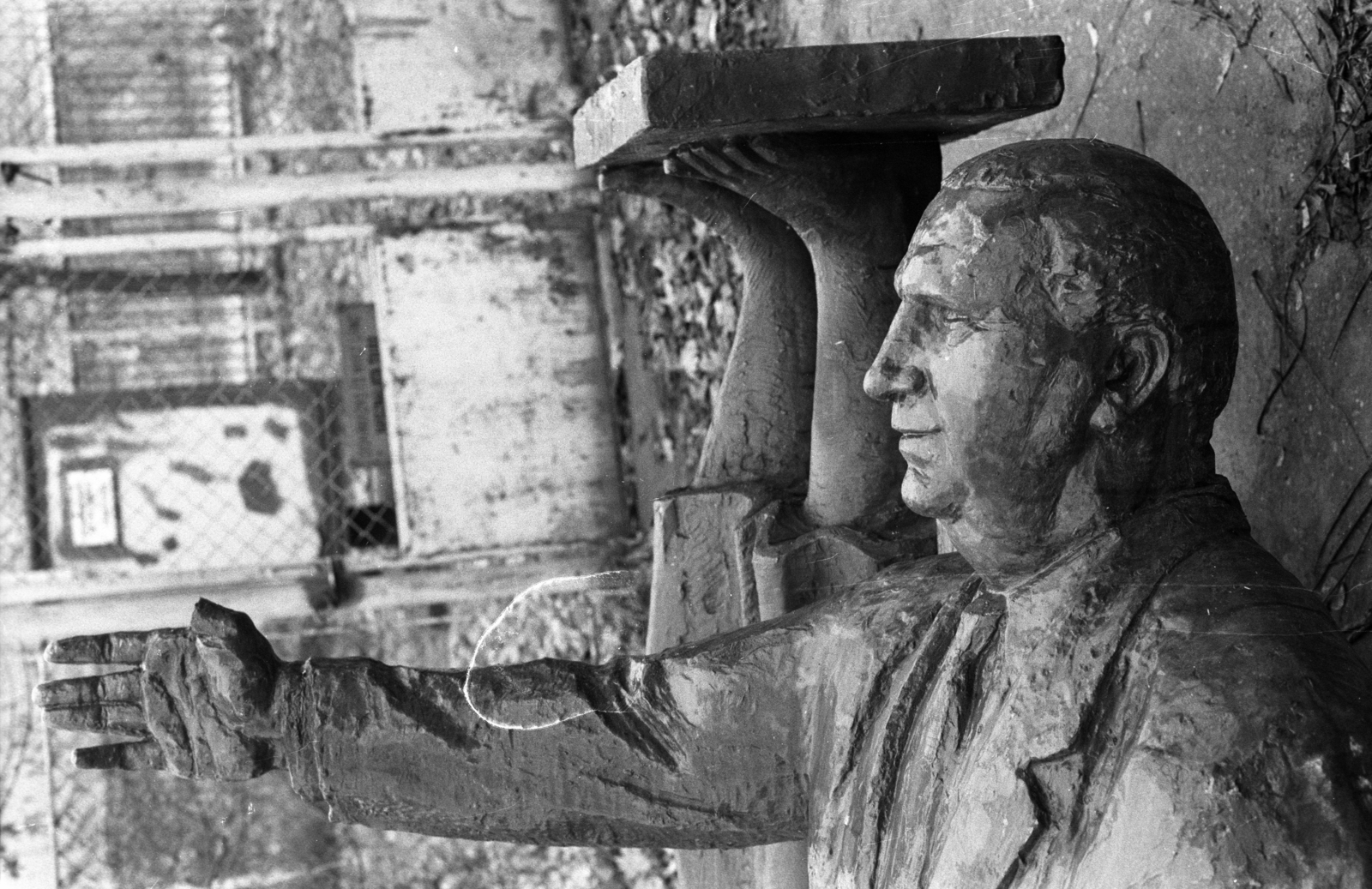 The statue of Ferenc Münnich was dismantled (Photo: Fortepan/Reference No.: 76464)

"the politically objectionable statues should not be crushed and melted down, but arranged in a European way, in a sculpture park. Out of the roughly one thousand public monuments or other works of art in the capital, fifty-eight will be placed in the 22nd District sculpture park. According to the numbers, that is how much is affected by the decision of the General Assembly of the Capital (which has the ownership rights of the statues in public spaces) last December." 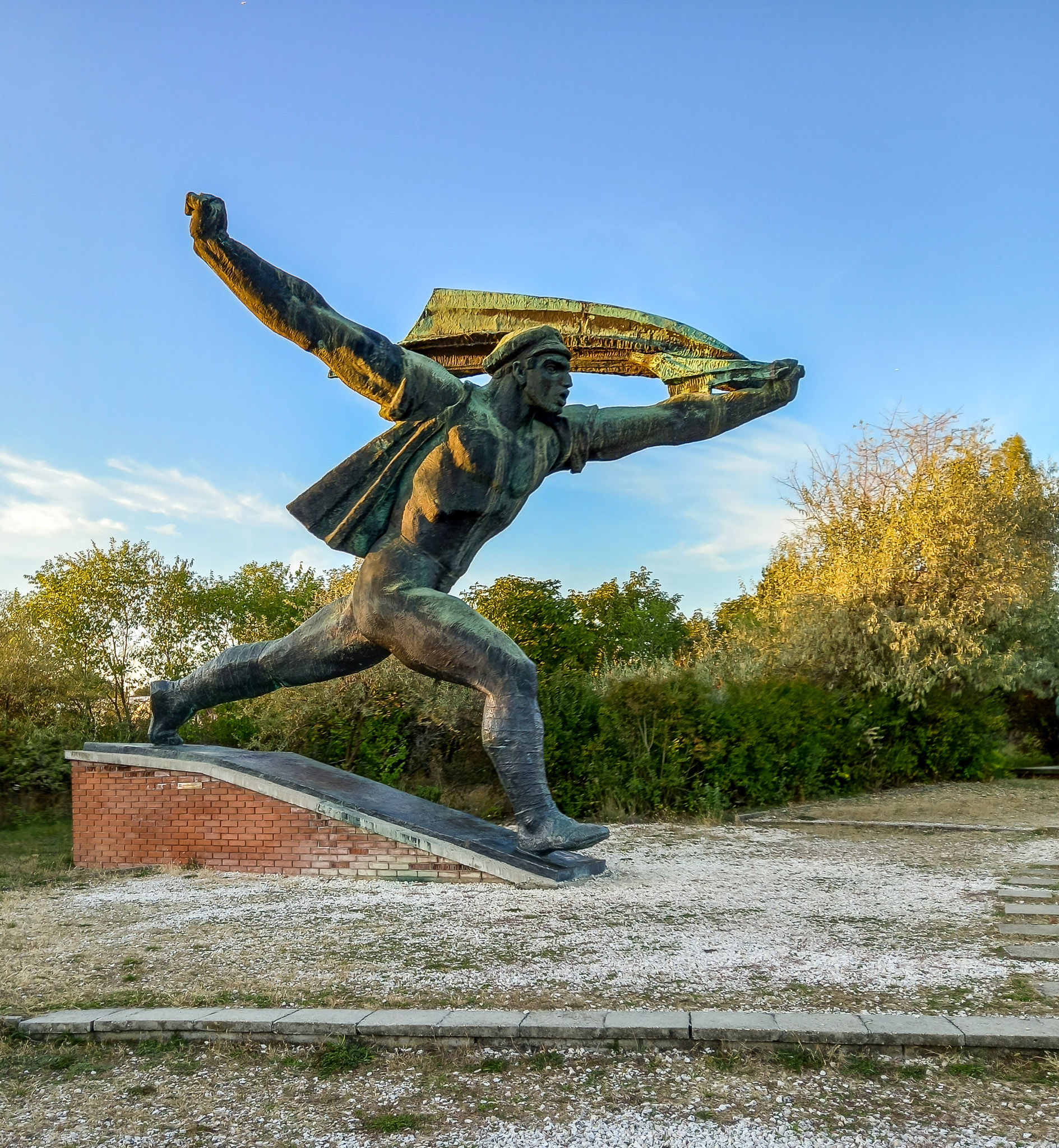 The mentioned idea of academician László Szörényi was thus slightly transformed, but it was conceived, unlike what happened at the end of the 1940s, the statues were not knocked down and destroyed, but preserved. For this purpose, they decided to create a special sculpture park, not in Csepel, but the 22nd District. The Budapest City Council issued a tender for its development, and the area was offered by the 22nd District municipality. 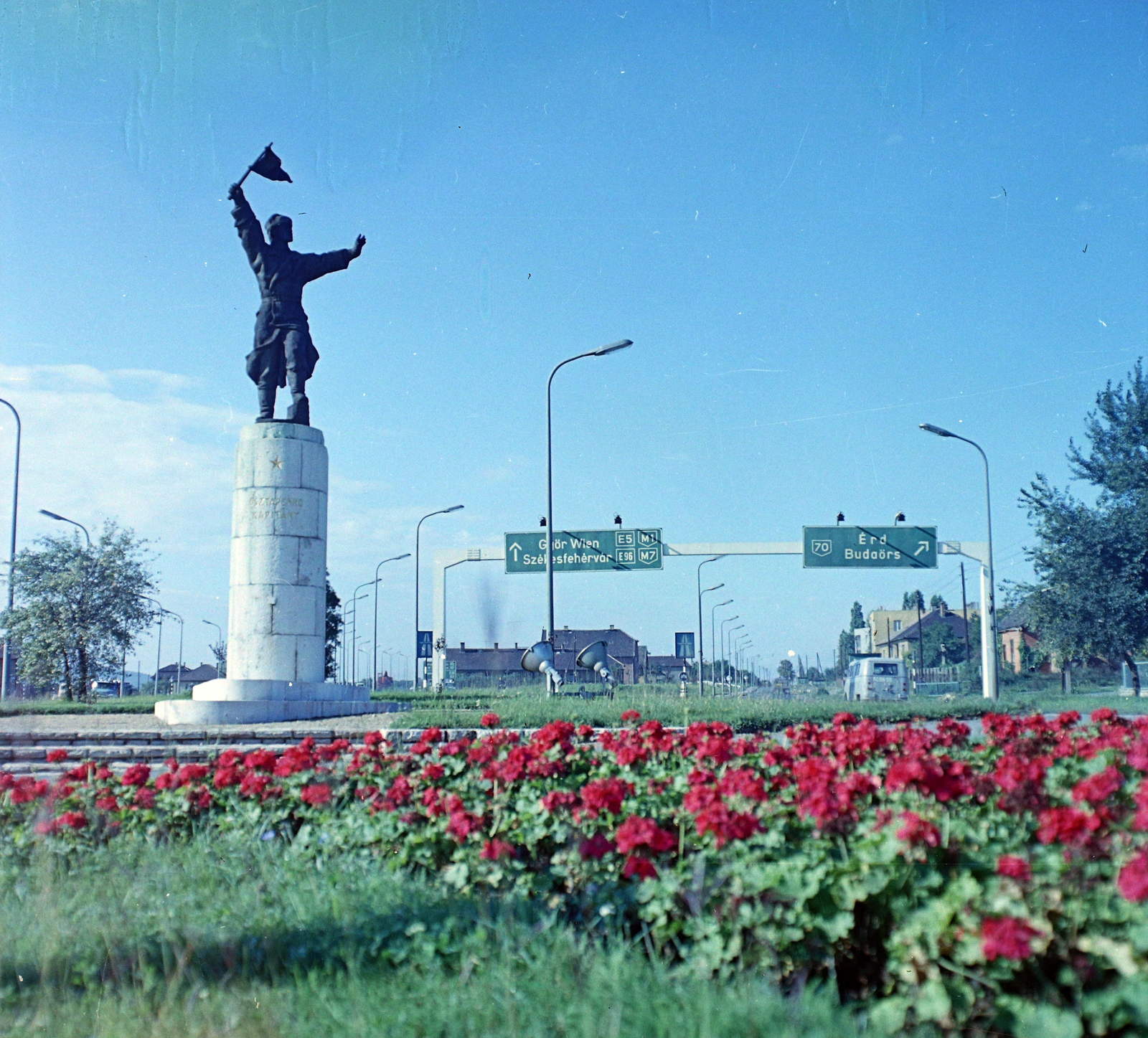 Captain Ostapenko's statue in Buda, at the starting point of the M1-M7 highways (Photo: Fortepan/Uvaterv)

The first statues were removed from Budapest's public spaces on 14 September 1992. The goal was to remove most of the monuments designated for demolition from the streets by 23 October. What kind of statues did the Hungarian capital want to get rid of? In addition to the Lenin statue on Felvonulás Square, which had already been removed under the name of "restoration", the statues of Marx and Engels, the statues of Captain Ostapenko and the Soviet captain Miklós Steinmetz, the monument to the Republic of Councils and many other statues disappeared from the public squares, a total of thirty in the first round.

Among the demolished and removed statues were artistically interpretable and meaningless propaganda works. When the demolition began, the construction of the sculpture park in the 22nd District was already in progress, so the dismantling of the public works was aligned with the ongoing work there. 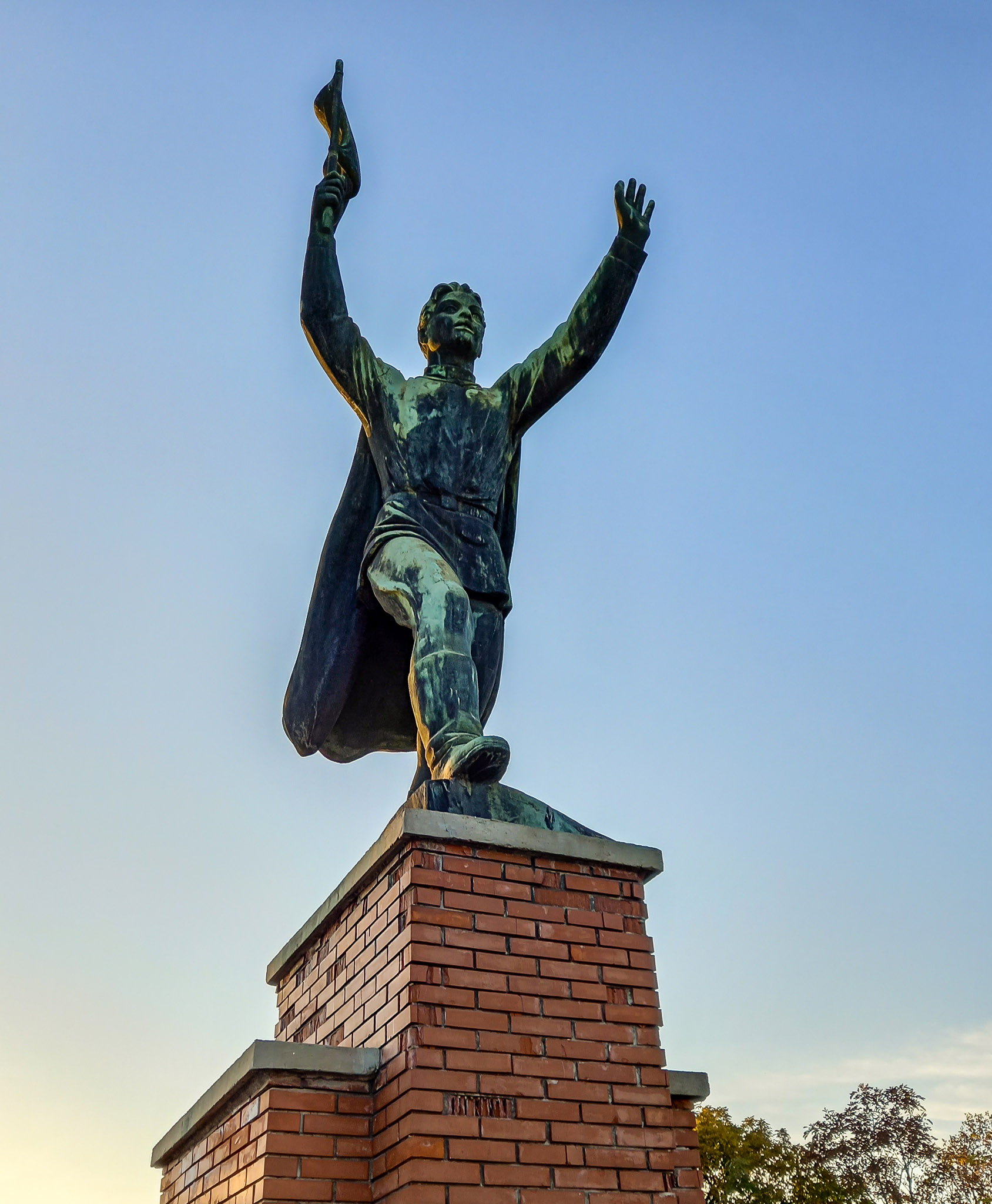 The Soviet heroic monuments were not placed here but in the Rákoskeresztúr public cemetery. The statues of Endre Ságvári and Ho Chi Minh were also not placed in the sculpture park, the Vietnamese embassy took over the monument of the Vietnamese leader, and the fate of Ságvári's statue was taken care of by the 2nd District organisation of the former state party, the MSZMP. 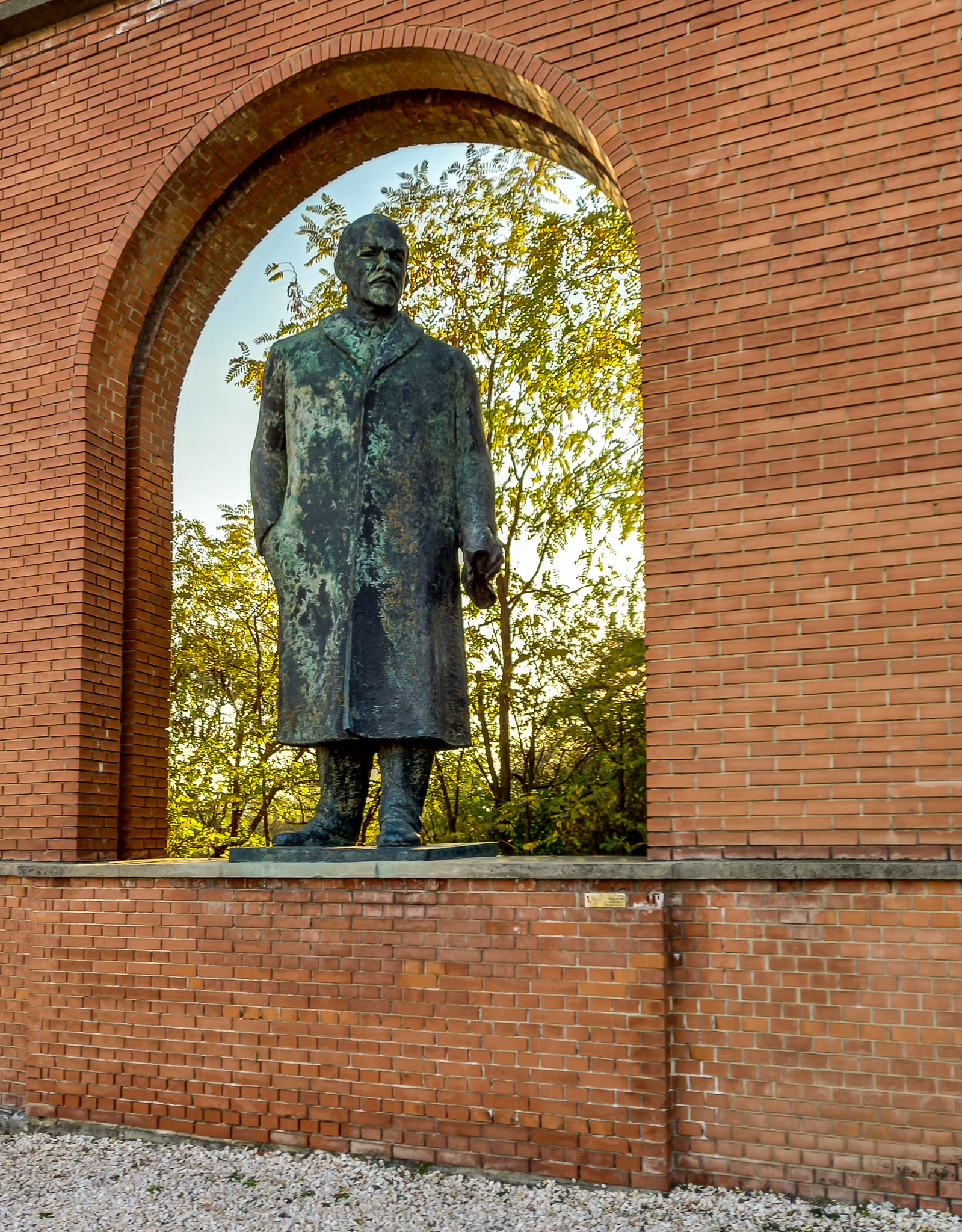 The 22nd District sculpture park, designed by architect Ákos Eleőd, opened to visitors in 1993. Here visitors can see - just like in a museum - the public works of the past regime. They can see how socialism thought about the world and people. The architect Ákos Eleőd, the designer of the park, wrote about his creation in the September 2008 issue of the Budapest magazine:

"Only two side elements of the Sculpture Park's triple gates open: fixed in the middle, the welded 4×4 metre iron plate reads Gyula Illyés's A Sentence About Tyranny poem. The park was formulated in the same circle of thought - the same silence rumbles between the sculptures that is in the poem. Pain, grief, helplessness, shame, shock, rage and defiance."

Over the past nearly 30 years, the sculpture park has become one of Budapest's most interesting tourist destinations, where domestic and foreign visitors go, perhaps to shiver a little.

Pestbuda also recommends its previous article: The toppled monuments tell about the old times (in Hungarian)

Cover photo: Ferenc Münnich and the statue made for the twenty-fifth anniversary of the "liberation" waiting to be transported (Photo: Fortepan/Reference No.: 76465)