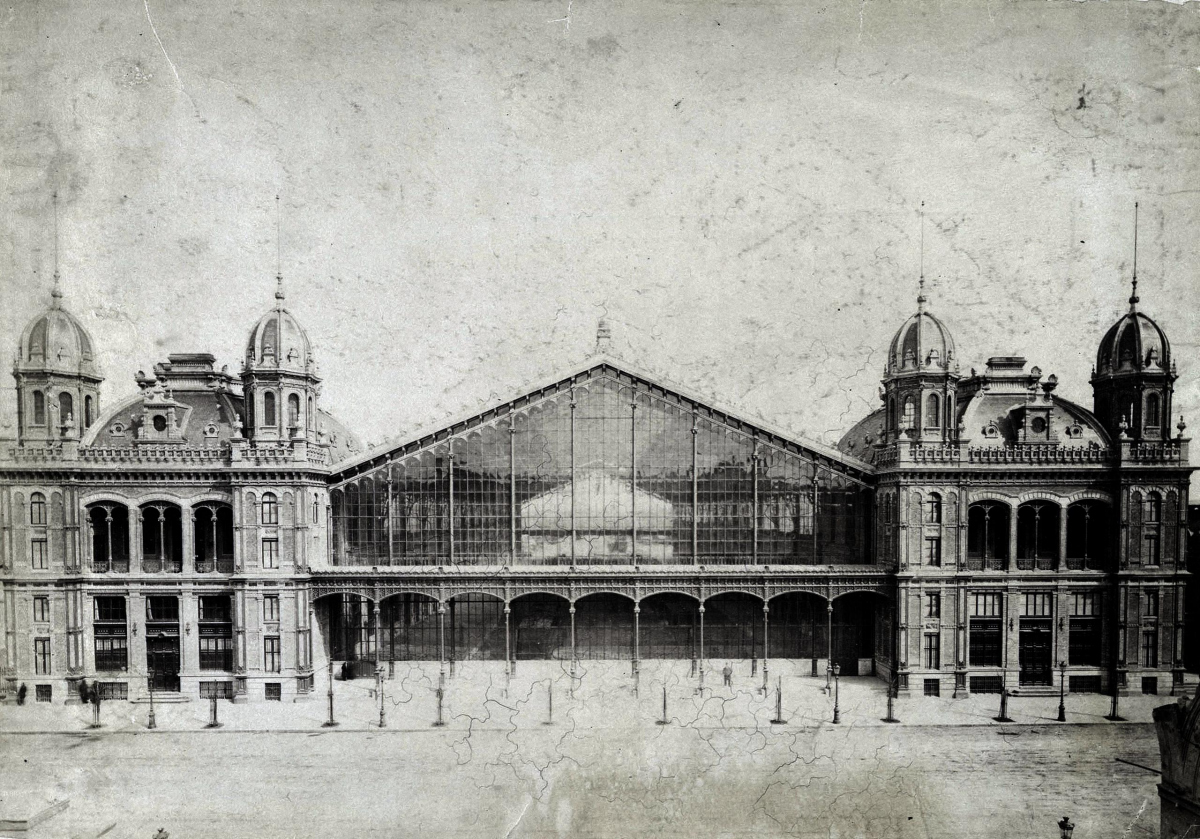 The railway station that was cut in two

By the beginning of the 1870s, the first railway station in Pest - the predecessor of Nyugati (Western), then known as Pest Station Building - was no longer able to handle the ever-increasing railway traffic smoothly. The owner railway company started the expansion, but then it turned out that the building stood in the way of the planned Outer Ring Road. Therefore, the old hall was "halved" and a new railway station was built over its northern part. The Nyugati Railway Station, as it is known today, was handed over on 28 October 1877, i.e., 145 years ago.

Pest's first railway station stood on the northern border of the city, on today's Teréz Boulevard, and trains to Vienna and Debrecen, as well as to Szeged and beyond, started from here. Railway transport changed rapidly, the network grew, and the old station building, handed over in 1846, became more and more cramped. The owner, the Austrian State Railway (which, contrary to its name, was a private company), therefore made plans to expand the station, and they even started the work. 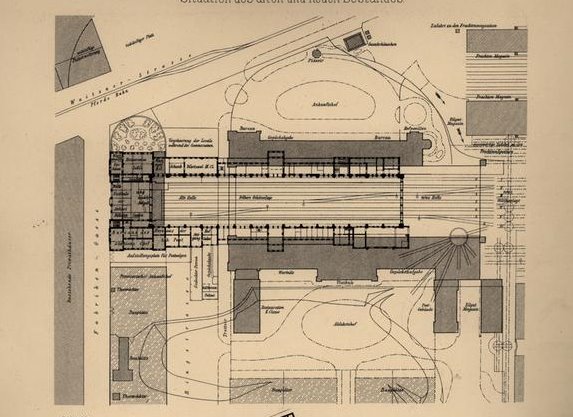 The location of the old building and the Outer Ring Road. The black line is the old station building, the grey is the area occupied by the new one (Source: FSZEK, Budapest Collection)

New parts of the building were built on the then Gyár Street, today's Jókai Street front, for which 350,000 HUF was spent. But then the regulation plans for the ring road were completed, and it appeared that the expanded railway station would fall within the regulation line, i.e., the road cuts the old hall in two. 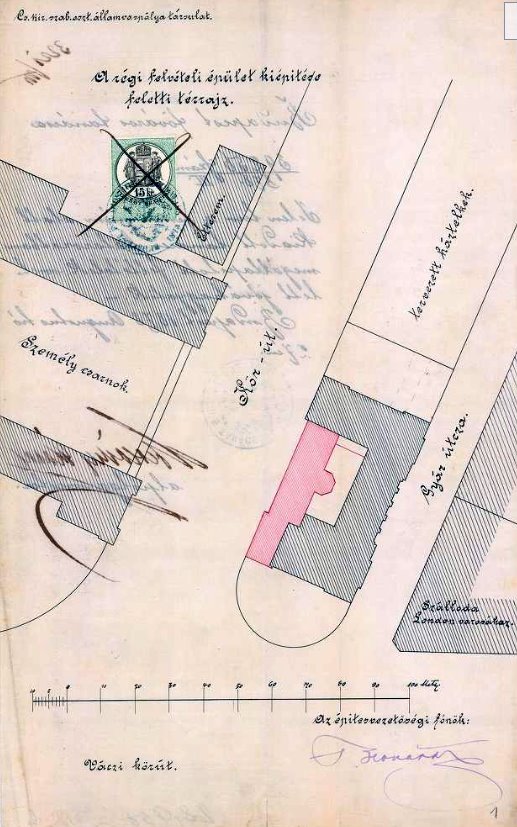 The complex of buildings bisected by the Outer Ring Road, the converted part of the old station building is to the right of the road, the new railway station is to the left on a contemporary site map (Source: Budapest Archives, Reference No.: HU BFL - XV.17.d.329 - 28902)

The negotiations between the railway company and the capital were concluded by 1873, and as a result, the regulation plan for the area around the new railway station was formed. The following can be read about the negotiations in the 8 November 1877 issue of the Vasúti és Közlekedesi Közlöny:

"It is worth noting that, after many years of negotiations, only in 1873 was the capital able to reach an agreement with the board of the state railway regarding the final arrangement as well as the transitions and corrections of the area around the railway station near the city. As soon as the contract was concluded, the board of the Austrian state railway, free of all pettiness and stinginess, immediately set about the construction of the work. The work to be established was not something easy. They had to deal with many difficulties that do not occur in other similar constructions. The first question, the question of money, did not cause many difficulties, because the amount of almost 8 million, which will be used for the final arrangement of the entire railway station, was readily voted by the board of directors."

The solution was that the railway station buildings were simply cut in half. The old and new buildings next to Gyár Street were kept, but behind it, to the north, the new ring road was built. 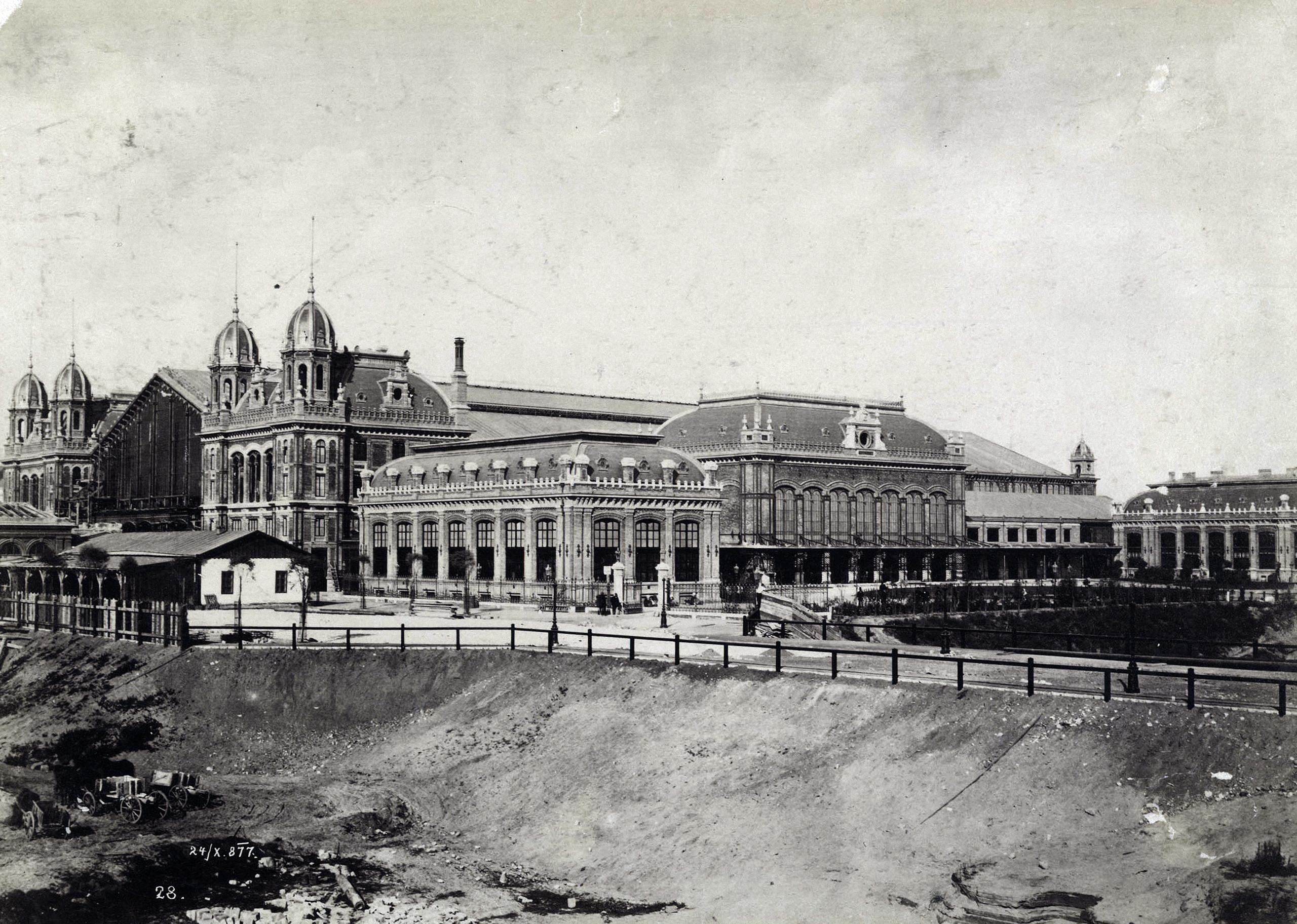 The Outer Ring Road is being built in front of the new railway station, recorded by György Klösz (Photo: Fortepan/Budapest Archives, Reference No.: HU.BFL.XV.19.d.1.05.201)

The railway company undertook to build a new railway station north of the boulevard. Four companies applied for the design of the new building, the winner was the French Eiffel Company, and the company's employee Seyrig Theofil prepared the plans. The Austrian railway company did not scrimp, they spent the 8 million HUF well on the new railway station - which was one and a half times the construction costs of the Margit Bridge - and enriched the Hungarian capital with a very unique and imposing railway station building. The 28 October 1877 issue of the Vasárnapi Ujság wrote about the building:

"The exterior and interior of the entire building are both very decorative and unique because iron has never been used to such an extent as here. Except for the two corner pavilions of the great hall, which are produced solidly, the main building is nothing more than an iron frame, which is walled up with the most beautiful, special-shaped and coloured bricks." 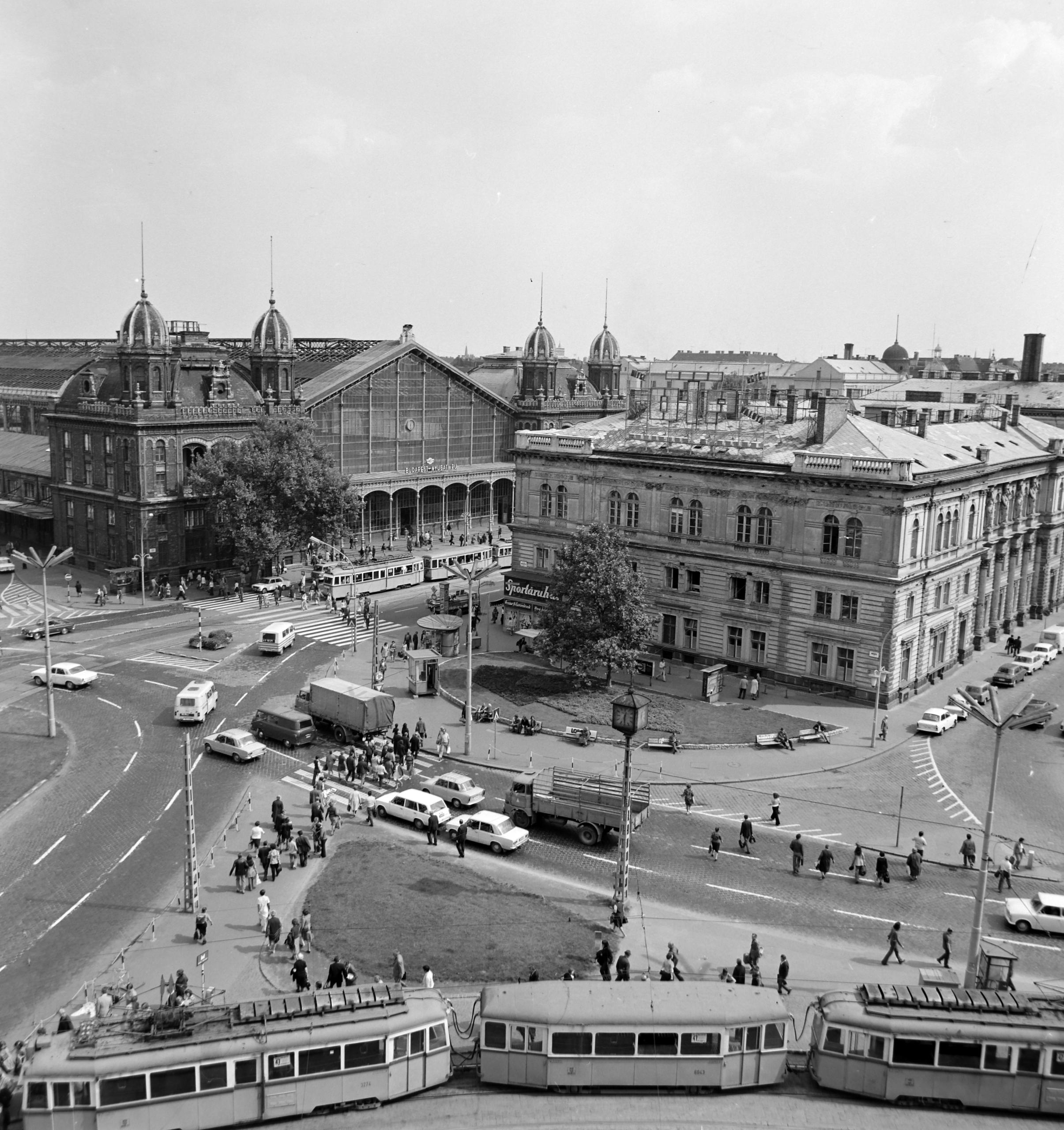 The office building opposite the railway station was built by the railway company before the planning of today's Nyugati: the old hall building crossed the line of the Outer Ring Road, which did not yet exist. The picture was taken in 1976, shortly before the house was demolished (Photo: Fortepan, Uvaterv)

It was the first major passenger train station in Budapest, and the solutions used in its construction are very similar to those used in the great hall of the Paris World Exhibition not long before that. The railway station is practically two independent buildings, between them is the great hall, which is 146 metres long, 42 metres wide, and its highest point is 24.8 metres. This huge hall is much larger than the old one, as its span was only 26 metres. This made possible one of the biggest feats of construction, namely that the new hall was simply built on top of the old one, and the old station building was only demolished when the new one was finished. The construction engineer was Hungarian, László Viktor Gyengő. Most of the structure was indeed made in France but some elements came from here, for example, the Ganz Factory. The new station building was handed over in a grand ceremony, as reported by Fővárosi Lapok on 30 October 1877:

"At the main entrance from Podmanitzky Street, where national flags and garlands announced the holiday of the day, a huge number of people were crowding constantly. The opening took place at eleven o'clock when the ministers arrived. There were: Tamás Péchy, Minister of Transport, ministers Ágoston Trefort, Béla Perczel, Béla Szende, Kálmán Bedekovich, accompanied by Baron Edelsheim-Gyulai staff officer, members of the authorities, representatives, ladies in large numbers. The arrivals were received on behalf of the railway company by Count Antal Széchen and August de Serres. During the viewing, the band of the Párma Regiment played Hungarian pieces in the park, and when the guests left, they played the Rákóczi March. In other words, the company not only spent a lot of millions and gifted the capital and Hungary with a disparate building unique in its kind but also made the Sunday holiday sympathetic, beautiful and memorable through its courtesy and tact."

The new railway station was equipped with everything that was expected of such a central station at that time, waiting rooms, an ornate ticket hall, restaurants, a baggage hall, a post office, a separate waiting room in the courtyard and a separate waiting room for members of the government. Six tracks originally awaited the trains in the largest railway station building of the Monarchy at the time, in a large hall with a huge glass wall opening onto the future ring road. This proved to be insufficient already in the mid-1880s. 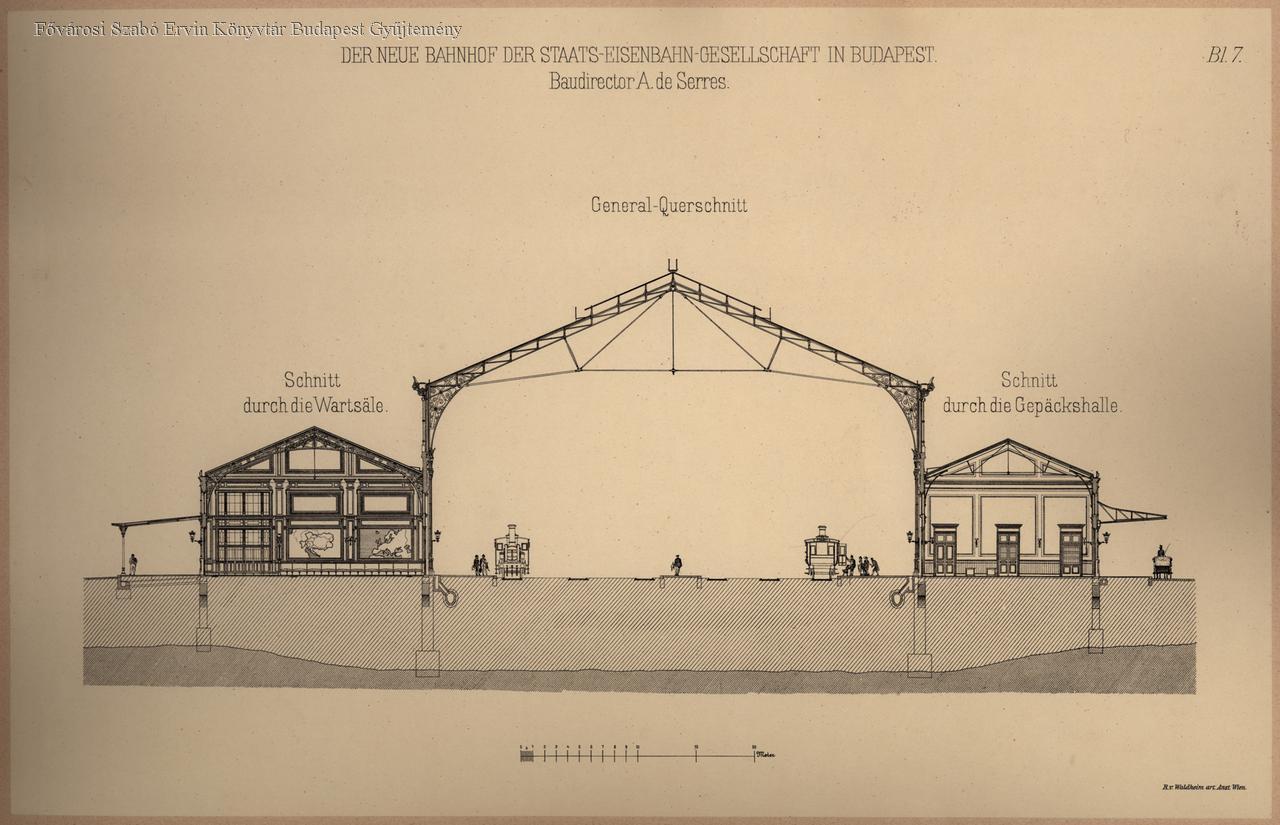 The drawing of the new hall - today's Nyugati - of the Austrian State Railway was drawn up by Auguste Serres, the construction director of the railway company, and the basic concept of the station comes from him (Source: FSZEK Budapest Collection)

The new station received its current name, Nyugati Railway Station, only in 1891, when the operating company was nationalised by the Hungarian government, and thus the railway station was also managed by Hungarian State Railways, i.e., MÁV. The Nyugati Railway Station has been serving the domestic railway traffic ever since, its imposing hall is one of the ornaments of the Outer Ring Road. Over the past 145 years, there have been several plans to move the trains but the current long-term plans also count on the Nyugati, even if the idea of moving the trains underground is realised.

Cover photo: The new railway station shortly after its handover, in 1878 in a photograph by György Klösz (Photo: Fortepan/Budapest Archives, Reference no.: HU.Bfl.xv.19.d.1.07.125)

THESE ARTICLES MAY ALSO BE INTERESTING:

Bridge over Marx Square - Fifty years ago, the environment of the Nyugati Railway Station was imagined this way