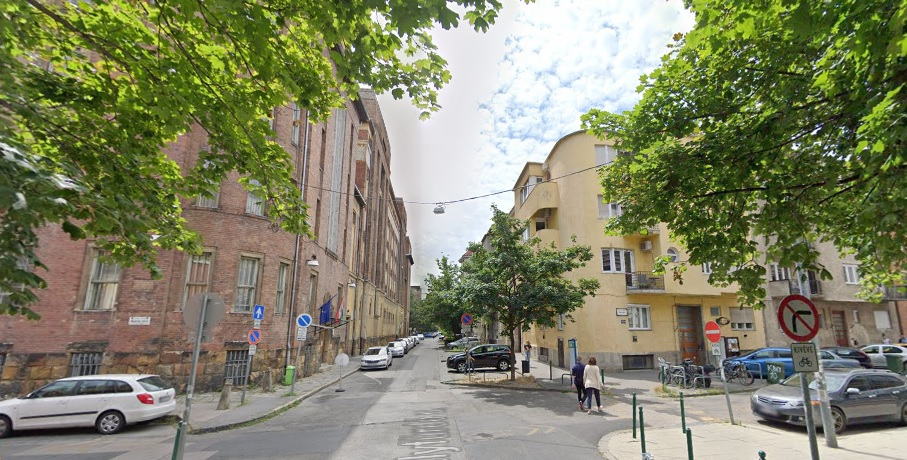 Gyorskocsi Street in Buda preserves the history of the means of transport used in the 18th-19th century, before the spread of the railway, which made it possible to get from Buda to Vienna and back in the shortest time. But what was that particular gyorskocsi [diligence or stagecoach] like, who travelled by it, and how long did the trip take? You can read about that here.

Back in the Middle Ages, and especially since King Matthias the most important route was the Buda-Vienna road, then from the 16th century onwards, its importance grew even more, as the royal court was already in Vienna at that time. After the expulsion of the Turks, if someone wanted to deal with some important matter, they mostly had to travel to Vienna, so reliable transport between Vienna and Buda was very important.

Reaching the imperial capital before the railway was built was not so easy, and the institution of the diligence provided a solution to this, which was nothing more than a relatively fast postcoach, that changed horses and was on the road even at night. This allowed the traveler to reach from Buda to Vienna in up to 24 hours, or vice versa. The coaches started in Buda from the northern border of the city, close to today's Batthyány Square. 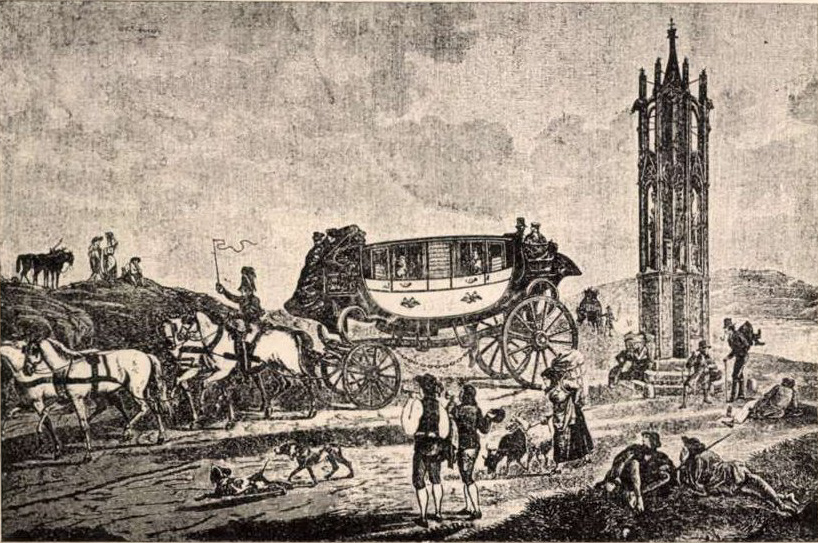 The commencement of postal services was ordered by Maria Theresa in 1749. There were three types of postal services, the fastest being the diligence for passenger travel, which carried letters and possibly money in addition to people, the mail coach, which also carried passengers and also goods, and the mail cargo coach, which carried only goods. Diligences between Vienna and Buda were introduced on 18 September 1752. There were not daily coaches, diligences departed once a week. From Buda, as mentioned, from today's Batthyány Square, ie from today's Gyorskocsi Street (whose name at that time - since Buda was in German in the 18th century - was Schantz Gasse, and later Diligence Gasse, its Hungarian translation is Gyorskocsi Street, which began to be used after the Austro-Hungarian compromise). The diligence departed on Sundays and arrived in Vienna on Tuesday. The price of the 2 gold forint ticket included accommodation and three meals a day. 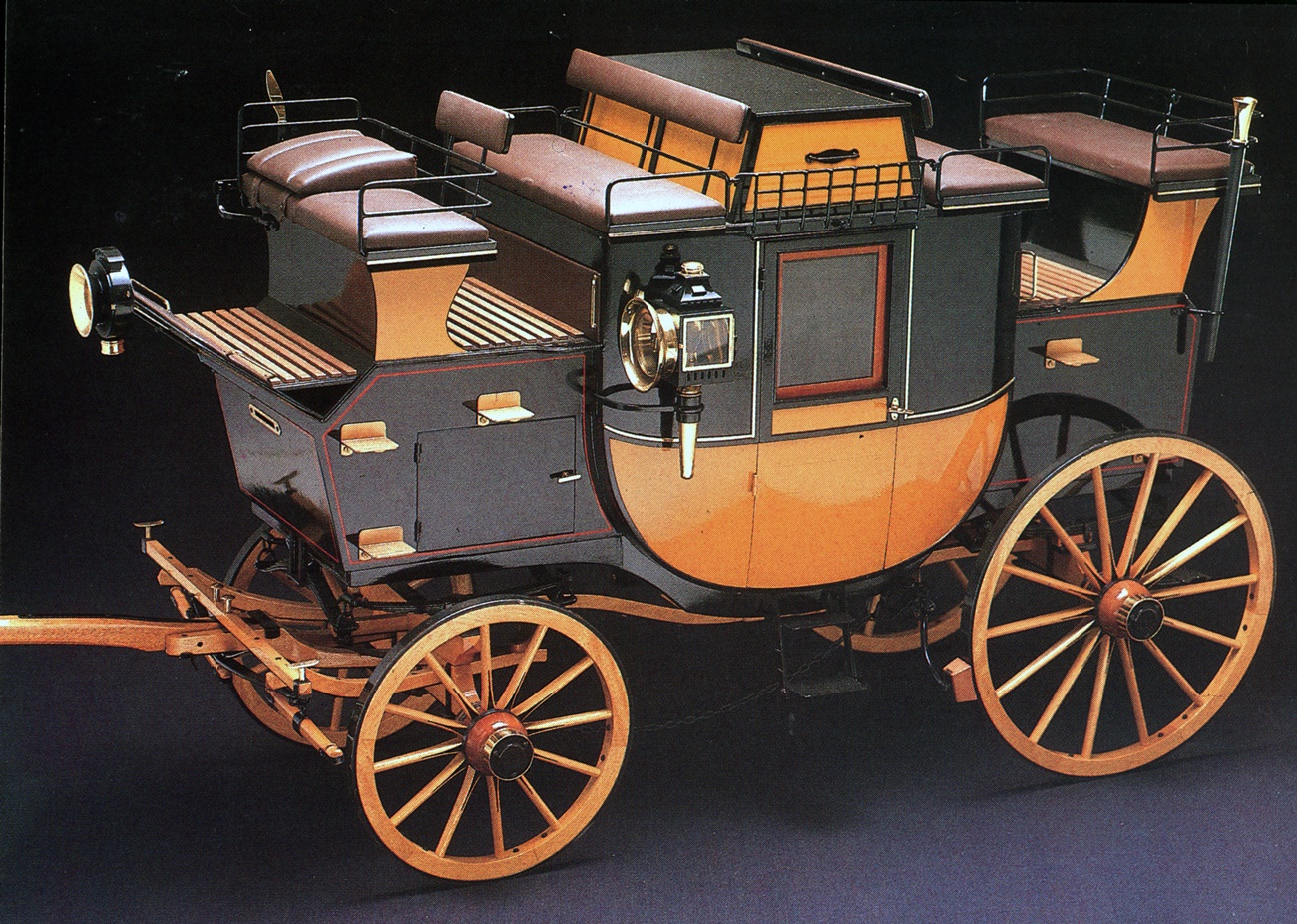 Postcoach model from the collection of the Museum of Transport (Photo: Hungarian Museum of Technology and Transport)

The coaches, which boasted the colours of the Habsburg Dynasty in black and yellow, were comfortable in their age, the seats were padded and covered with velvet. The driver wore a uniform, and the coach traveled at an average speed of 9-10 kilometers per hour

We receive a first-hand account of the trip from Baron Hoffmansegg, a resident of Dresden, who, according to his diary, wrote the following lines on 3 July 1793:

“I left Vienna on the 23rd of last month. It is also impossible to wish for a better postal service than it is in this country. It happened several times that the horses were replaced sooner than the wheels could be lubricated and there never happen delays and then apologies that the horses were not here and more like that, like at home. Only with such an institution is it possible to travel 36 miles in two days, by travelling from 5 am to 9 pm, because Buda is so far from Vienna, yet I was already there on the evening of the second day. I spent a night in Győr. ”

The book was published in 1887 in Hungarian translation under the title Gróf Hofmannsegg utazása Magyarországon 1793-1794-ben [Count Hofmannsegg's Journey to Hungary in 1793-1794], the itinerary begins with the lines above.

Although the diligence was not cheap, there was a demand for the service, so it was developed, from 1825 there were three coaches a week between Vienna and Buda, the journey time was also reduced, the coach reached its destination in 24 hours. The state diligence started from Gyorskocsi Street, but several Hungarian cities could be reached by diligences, although they were not operated by the state, but by private entrepreneurs.

Although cruises began in the 1830s, the demand for diligences did not cease, from 1840 onwards, coaches went daily to Vienna.

How a diligence journey took place and what problems may have arisen was interestingly reported by a traveler in the 19 July1839 issue of Századunk. True, here the character of the story did not want to get to Vienna, but to Eger:

“Arriving in Pest at 8 pm, I booked my accommodation ­close to the diligence institute, knowing from the 'newspapers of Buda last year' and the postal announcement of this year's calendar that the diligences were travelling here or there from Pest. In comparison, the diligence had to leave Pest for Kassa [Kosice] at 12 noon on Sunday, so I also checked in immediately on Sunday morning that I wanted to pay for a seat to Eger. To my check in, the director of the diligence institute replied that the coach had left early in the morning, by which time I was showing him the departure day and hours for 1838, but the answer to my statement was that this deadline had been changed and this the director had already stated it in the printed plaque of Pest, thinking that it was enough to report. I was comforted, however, that he would publish this in the newspapers in the future, but now I should wait until Wednesday; then in the morning a coach will go to Gyöngyös, and if 3 or 4 passengers come together, it will take me to Eger as well. ”

In the diligence, by the way, there were serious rules for passengers, they had to check in on time, even days in advance. Dogs could not be transported by the coach, and smoking was only allowed with the consent of all passengers.

The emergence and construction of railways ended diligence travel, and the post office abolished this type of service in the 1880s. In Buda, only Gyorskocsi Street, the place of departure and arrival of diligences, remembers the once very important, but now almost forgotten mode of transport.