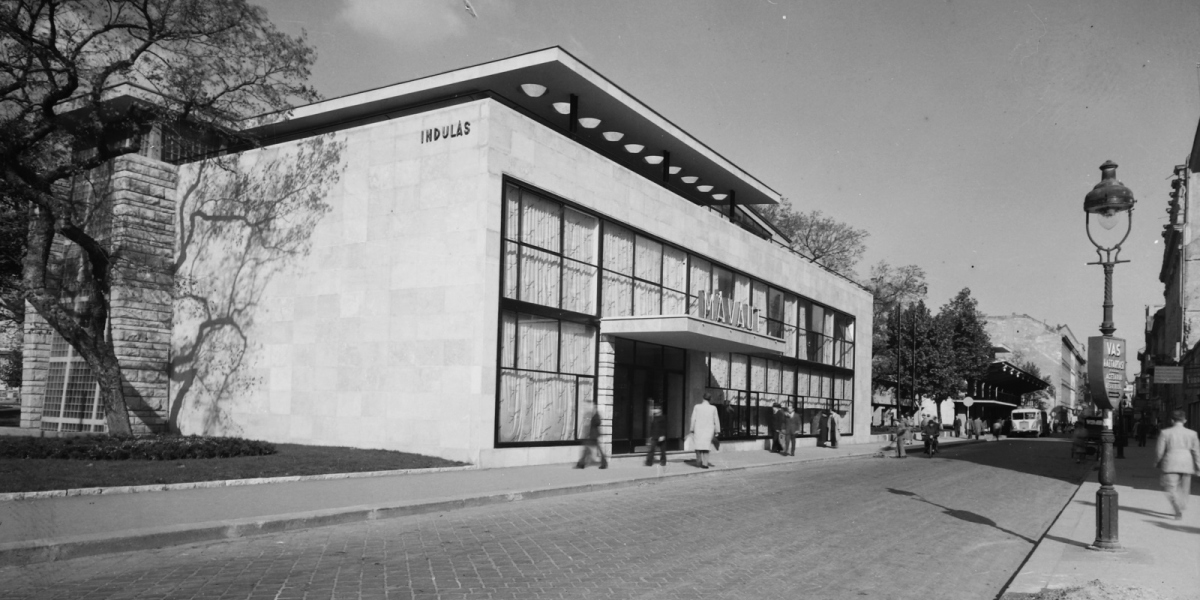 National and international bus services in Budapest left from Oktogon from 1927 and arrived there, but after World War II, a new, modern station was needed, so in 1947 the Ministry of Transport and Posts ordered the construction of a new, centrally located station building.

In the first round, the election fell to the centre of the city centre, then called Sztálin Square from 1946, on the site of the former National Salon building, but this was eventually discarded. Other places then came to the attention of decision-makers, such as Liszt Ferenc Square, but they eventually stayed at Sztálin Square, where the demolition of an old three-storey residential building and the cutting down of some trees provided enough space for the new building and bus-parking.

The investment began in early 1949, and on 1 August 1949, the building, designed by István Nyíri, was completed. The house itself was more than a waiting hall and a ticket office, a space for cultural events was created on the upper floor. 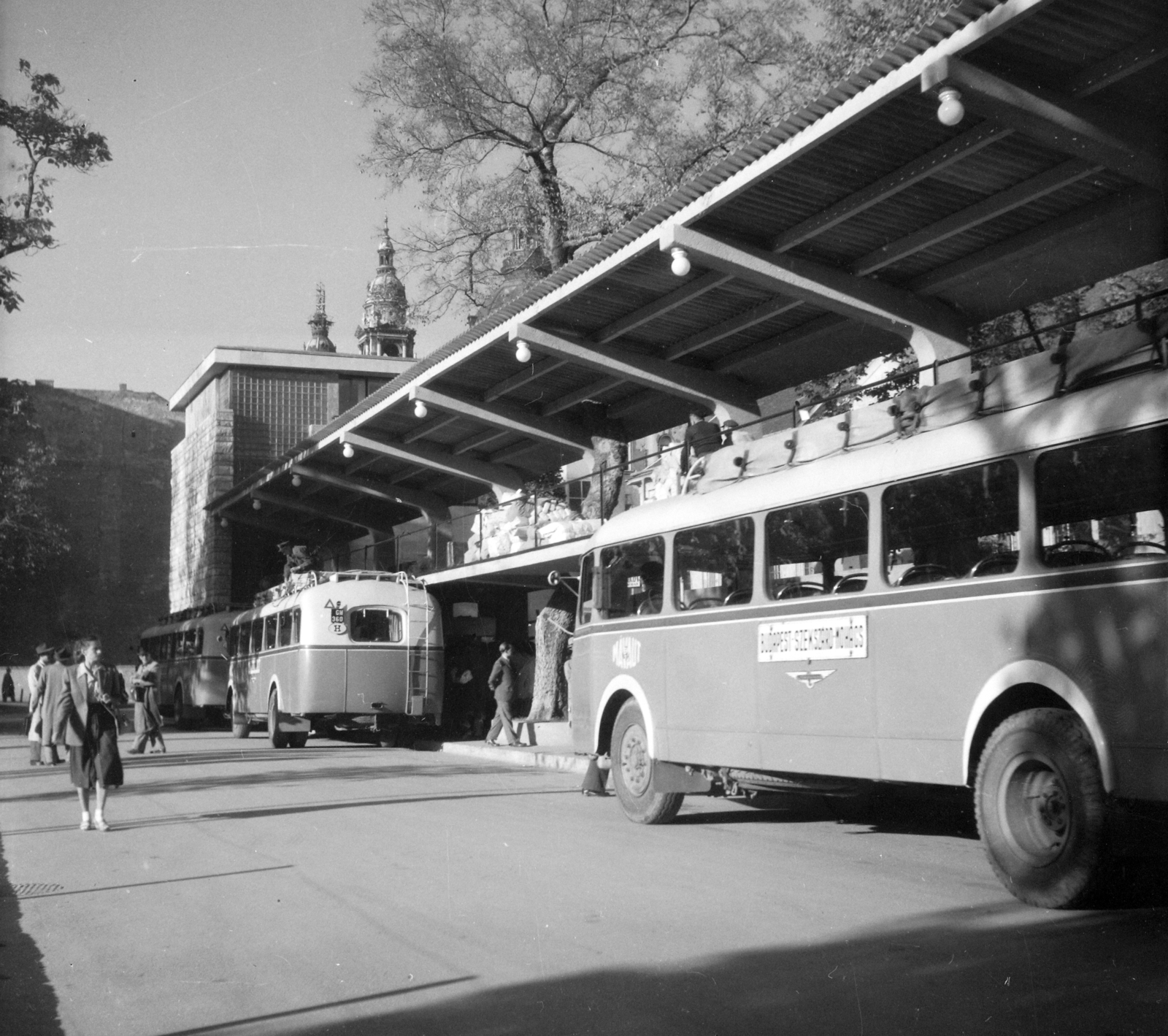 In the new building, the terrace made it easier to pack luggage (Photo: Fortepan/UVATERV)

At the time of handover, 46 buses departed from here: the departing buses were served from wing “A”, and the arrivals from the smaller wing “B”. A terrace ran above the platform, which had an important function, as at that time the passengers' luggage was not placed in the luggage compartments at the bottom of the bus, but at the top of the bus, this was reached from this terrace. Here is how the Haladás presented the new building:

“The magnificent building, created with modern, unparalleled luxury, elegance­ and grace, is a new feature­ of Sztálin Square: the large bus station that opened on Sunday. There was a lot of debate before it was built as to why the bus station was being put right here. It is now clear­ that the critics were not right. The bus station is located in the heart of Budapest, sunny­, airy, easily accessible and can be reached quickly from all parts of the city. (…) Glass, marble, aluminium and wrought iron. Most of these materials are visible outside the walls. (…) The departure station falls towards Deák Ferenc Square. The floor is covered with marble and a huge checkered rubber­ mat. To the left of the entrance: the station manager, the ticket offices and the information office, on the right: the post office with telephone booths, the theatre ticket­ office, newspaper stand and book pavilion, and then the baggage claimant­ place. There is also espresso and a separate buffet in the hall. Brilliant cleanliness everywhere. Above the wall in huge size is the well readable­ schedule. Clocks built into the wall. Comfortable seating under the columns of the hall. Huge curtains­ with a yellowish pattern on the slightly inward-leaning monstre windows.”

The modern-lined house - which did not follow the increasingly dominant “Stalin-Baroque” or socialist realism style, but the modern “Western” direction - became a monument as early as 1977. True, the square was already renamed in 1953, no longer named after Stalin, which had become unpleasant to the system, but after one of the ideological founders of communism, Engels. 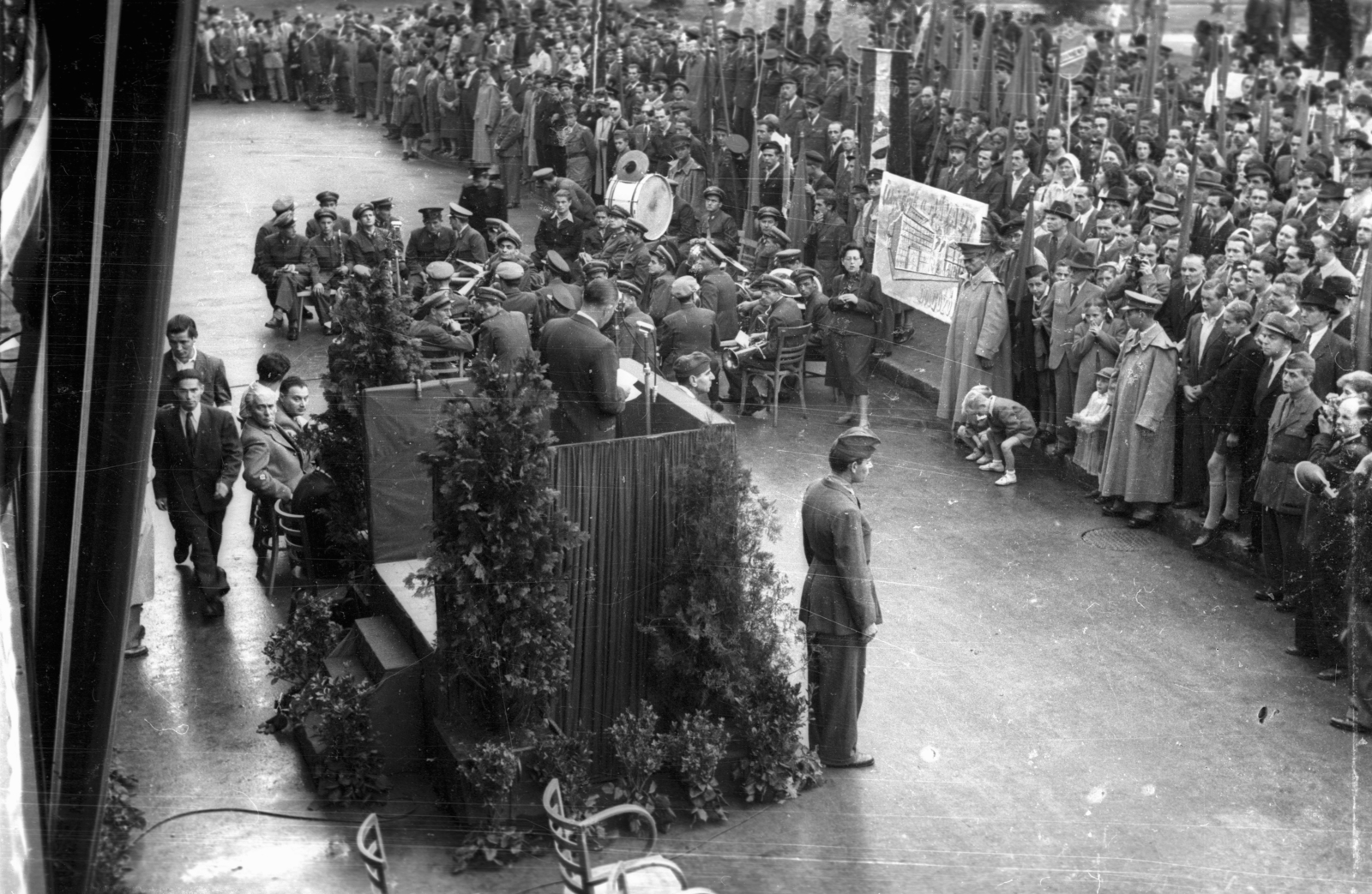 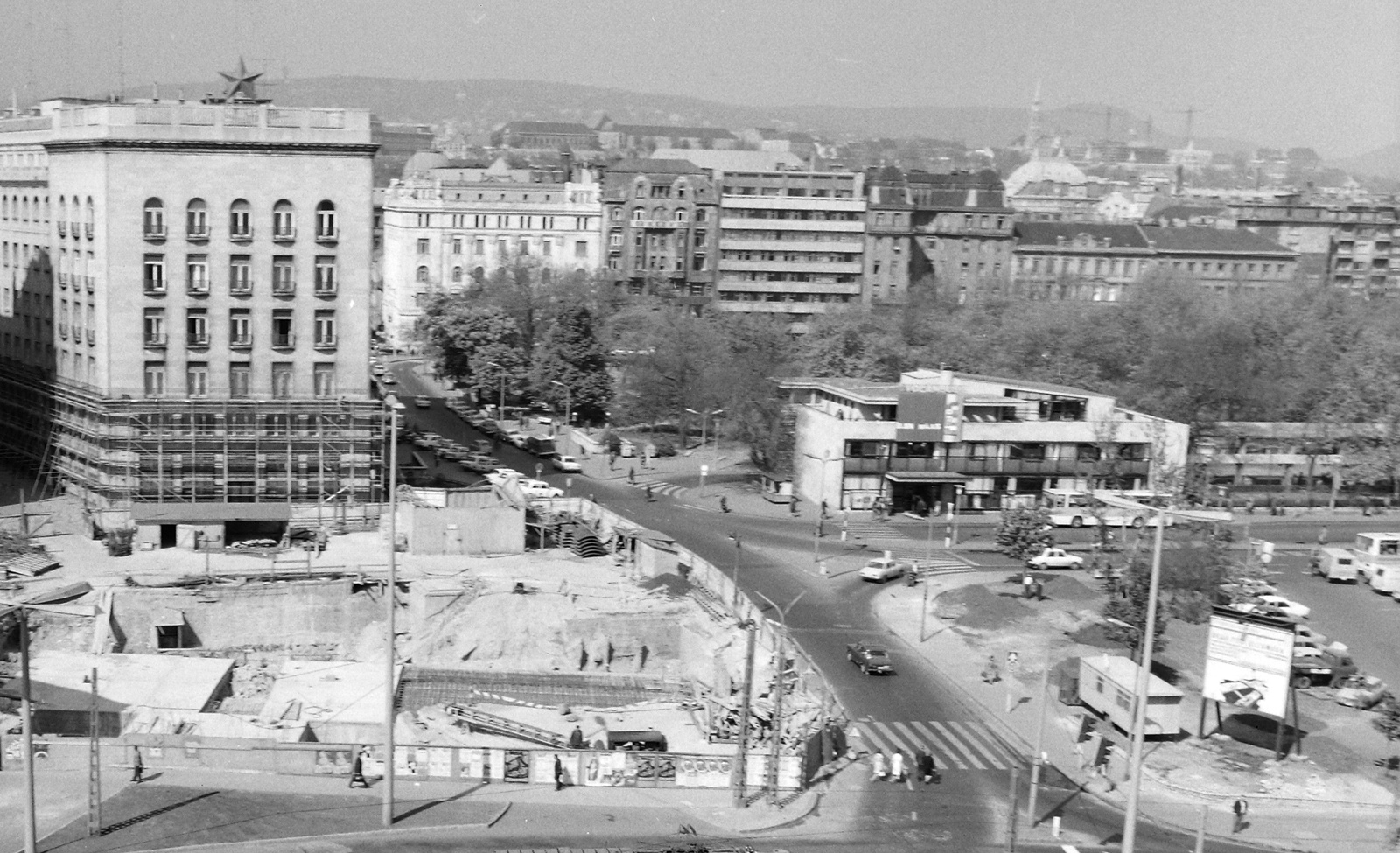 The building in 1975 when the underpass was under construction. It was declared a monument in 1977 (Photo: Fortepan/Uvaterv)

As a result, the then Erzsébet Square station became redundant. Volánbusz has not officially departed or received buses for 20 years, since 16 October 2001. True, at that time the new station was not yet ready. The strange situation was written in the 9 October 2001 issue of Népszabadság:

As a result, the then Erzsébet Square station became redundant. Volánbusz has not officially departed or received buses for 20 years, since 16 October 2001. True, at that time the new station was not yet ready. The strange situation was written in the 9 October 2001 issue of Népszabadság:

It is certainly good for the users of Erzsébet Square, for the people of Budapest who are resting there and enjoying the open air, that the buses do not blow smoke there. The bus station has moved, but fortunately, the station building handed over in 1949 on Erzsébet Square, albeit with a different function, has survived.