Before the big changes - Budapest at the time of the compromise

The Austro-Hungarian Compromise, established in 1867, ushered in one of Hungary's heyday. Under the Compromise of 155 years ago, a dual system was created - hence our common word dualism, which is used to characterise the period up to 1918. This upswing has brought about great changes: as a result of industrialisation, more and more people have moved to the cities, and the population of Budapest has grown exponentially. But what was the capital like in the second half of the 1860s?

In fact, Budapest did not even exist at the time of the compromise, as Buda, Óbuda and Pest were still three separate settlements. Legally, Budapest was not established until 17 November 1873, so it is the birthday of our capital. Of course, the Chain Bridge has crossed the Danube since 1849, symbolically uniting the towns on the two banks of the river, but at that time they were collectively called Pest-Buda. It is no coincidence that Pest was ranked first, the city on the left bank developed really dynamically. 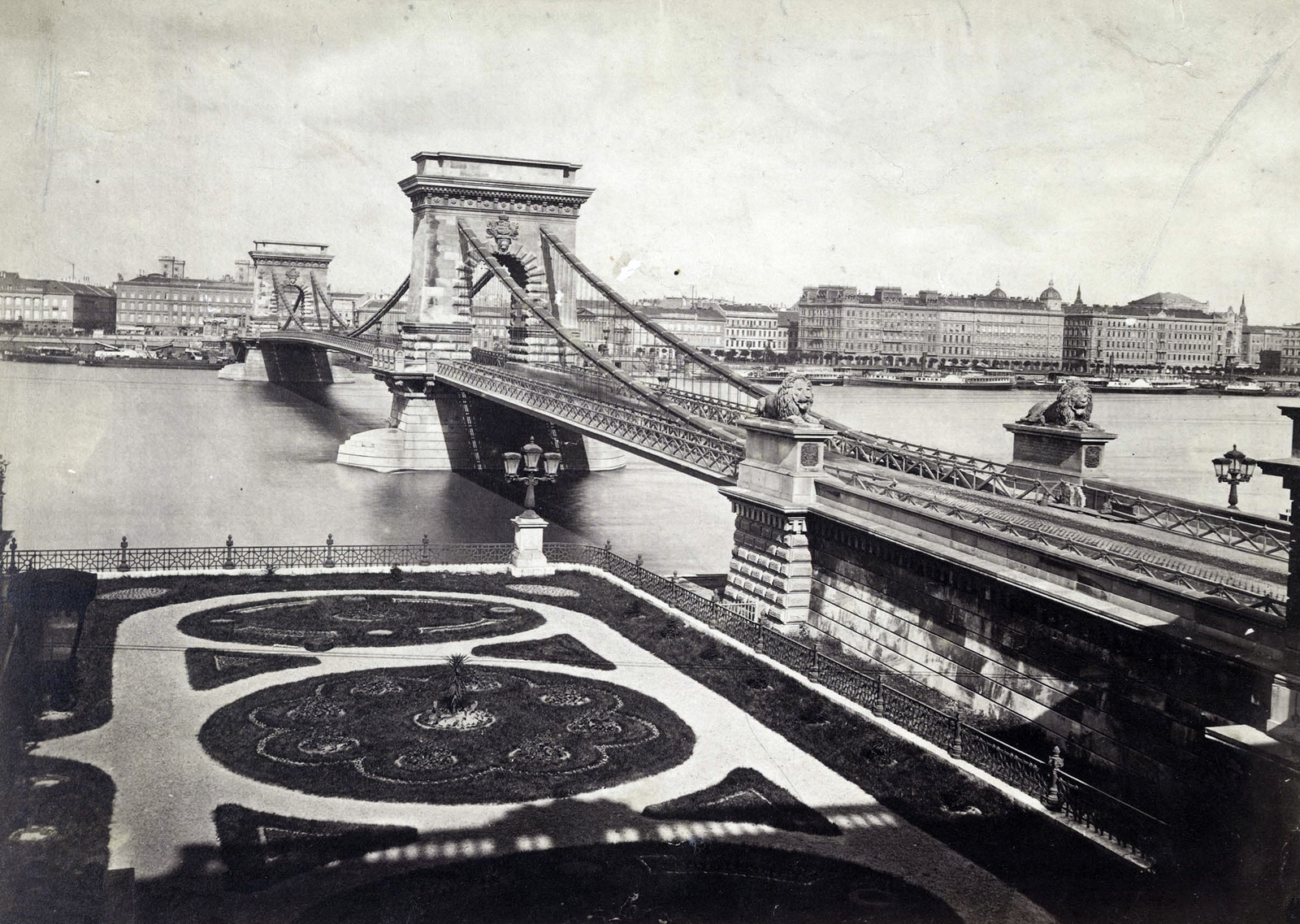 The wall surrounding the medieval town - which ran roughly in the line of today's Inner Ring Road - began to be demolished as early as the end of the 18th century because it hindered more and more intensive trade. This is because important roads entered the city at the former gates, which also widened into squares.

At the junction of Üllői Road, for example, the Széna Market (Heumarkt in German) was formed, which was renamed Széna Square in 1866. Not even a decade passed before the name was changed again: in 1874, it was renamed Calvin Square, as the Reformed Church in Pest had stood here since 1830. In 1953, only its spelling was Hungarianized: then it became Kálvin Square - as it is known today. 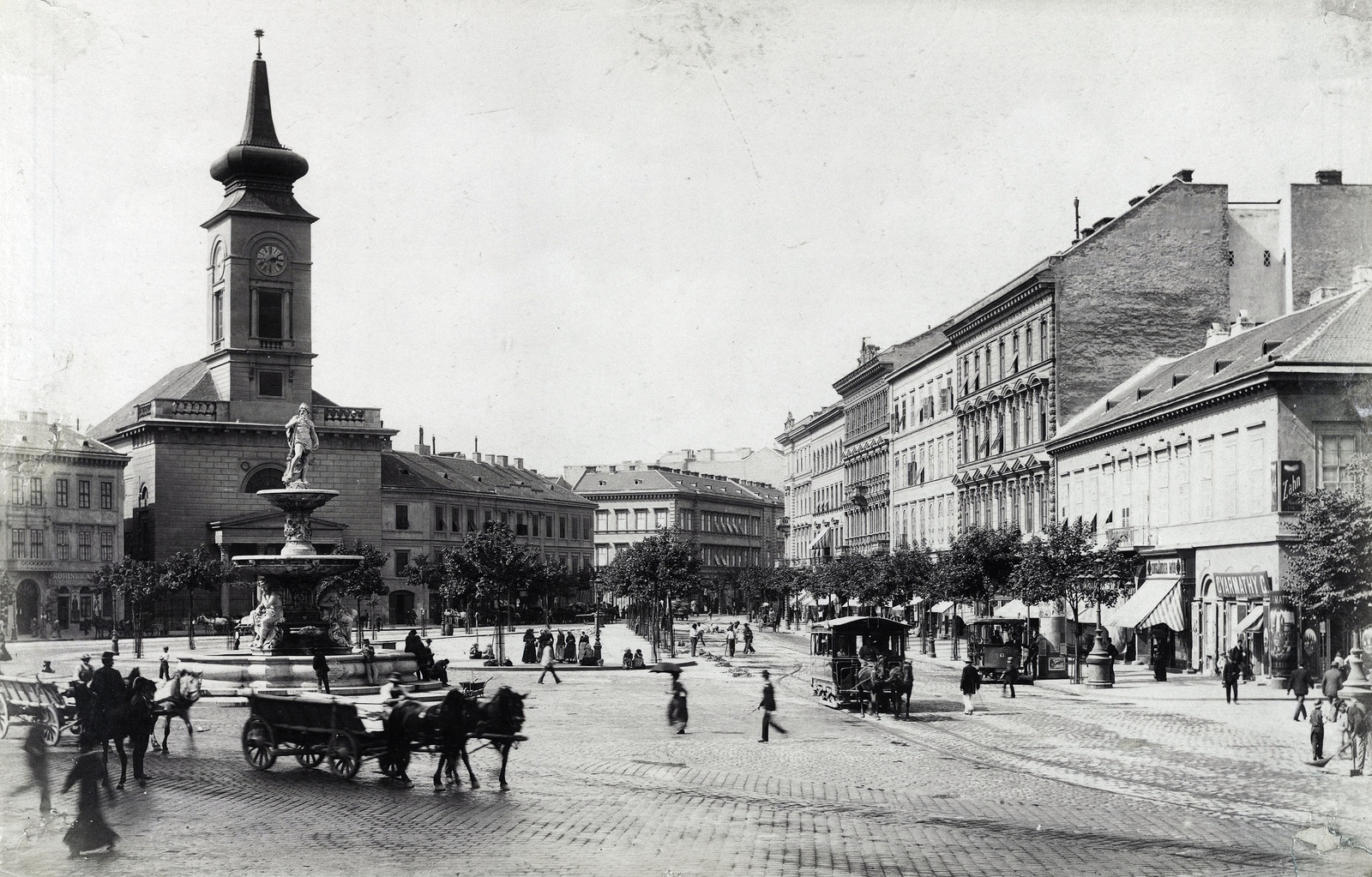 At the time of the Compromise, Kálvin Square was still called Széna Square (Source: Fortepan/Budapest Archives, Reference No.: HU.BFL.XV.19.d.1.08.042)

At the time of the Compromise, however, it did not show its current image at all. Apart from the church, only the one-storey school, designed by Antal Balla and Mátyás Zitterbarth and built between 1802 and 1804, was located on the corner of the Hungarian National Museum and Két nyúl Street (now Lónyay Street). Incidentally, the square was also bordered by single-storey, classicist buildings from Kecskeméti Street, which can be seen in the oldest photo of Pest (daguerreotype) - in its slightly earlier condition, dating back to 1840–1860. 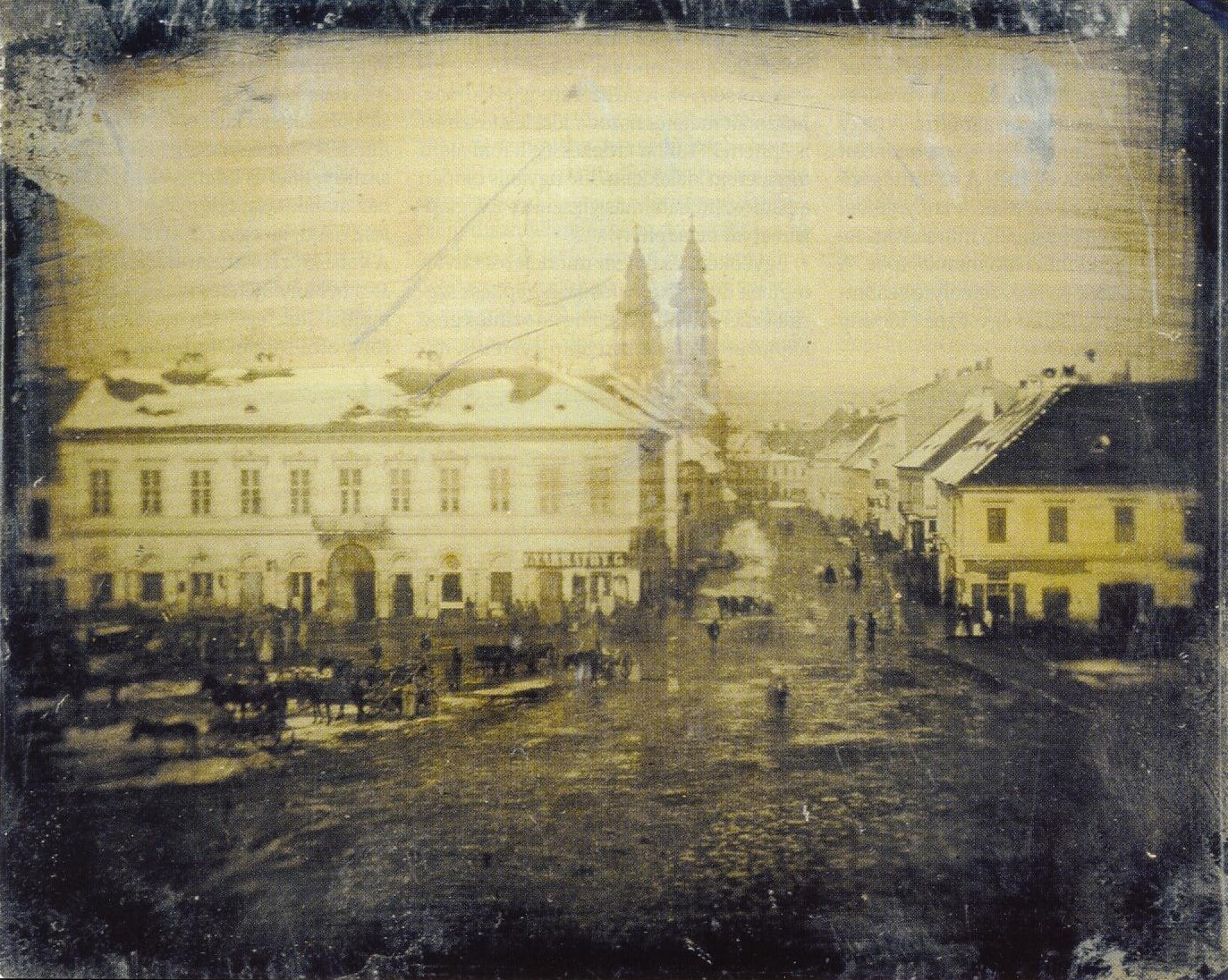 Just the year it took the name Széna Square, another important event took place here: on 30 July, the city’s first horse-drawn railway started. The track built and operated by the Pest Road Railway Company travelled to Újpest-Városkapu, so it could be considered the predecessor of today's M3 line in terms of its destination and route. The rails were laid on Inner Ring Road (then known as Ország Road), and its important stop was the National Theatre at the intersection of Hatvani Street. 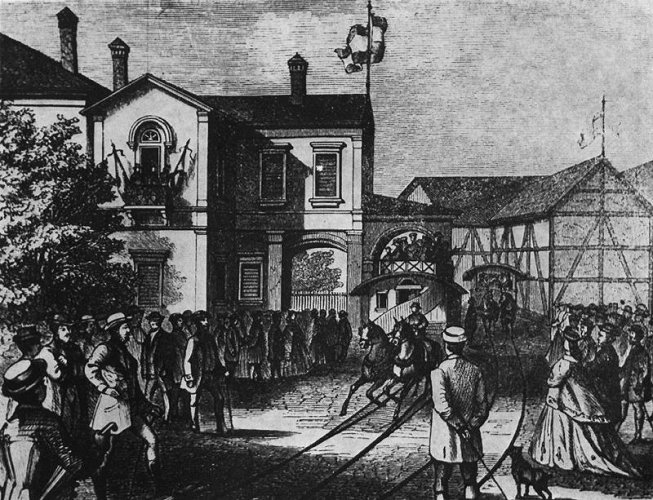 The start of the Pest horse-drawn railway (Source: wikipedia.org)

The institution opened its doors here in 1837, although it has only had this name since 1840 (it operated as the Hungarian Theatre of Pest for the intervening three years). Its construction on the plot donated by Antal Grassalkovich (opposite today's Astoria Hotel) began in 1835 according to the plans of Mátyás Zitterbarth Jr. in the Classicist style. At the time of the Compromise, this building with a large carport and a facade divided by pilasters occupied the beginning of Kerepesi (today Rákóczi) Road. 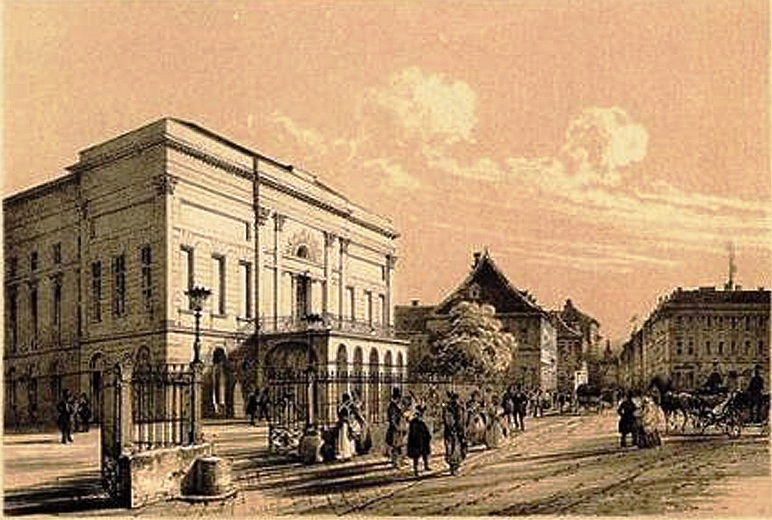 The next stop of the horse-drawn railway was at the square, which was created at the mouth of the road coming from Vác, which was called the Cabbage Market in the first half of the 19th century, and from 1830 it was called the Zsidó Square. This public area was renamed in 1866, it took the name of Ferenc Deák. It is a rare honour to have something named after someone in their lifetime, and The Wise Man of the Nation, quite rightly so, deserved it. The main attraction of the square at that time was the church of the Lutheran community in Pest, which was built between 1799 and 1808 according to the plans of Mihály Pollack. 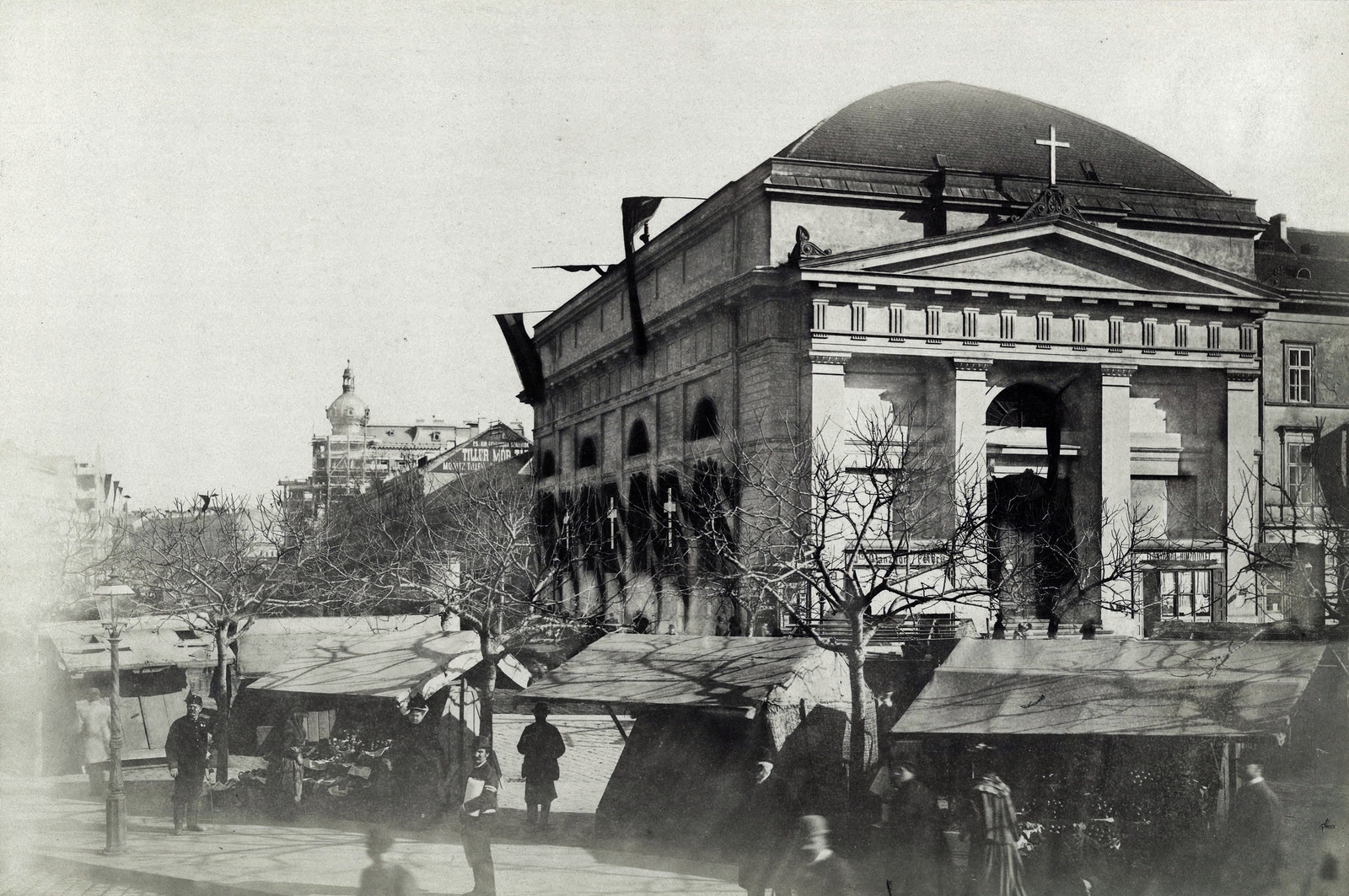 The park area with a square floor plan a little further north was already called Erzsébet Sqaure at the time of the Compromise, but the street leading to the Danube from here (now József Attila Street) was still called Fürdő Street. The Diana Bath operated in the house No. 3 of Lánchíd Square (now Széchenyi István Square) on the bank of the river. It opened its doors around 1823 in a two-storey, Classicist building designed by József Hild, and was initially called Dunafürdő. At the time of the Compromise, it had already used the first floor of the building as well, as a steam bath was built there in 1855. 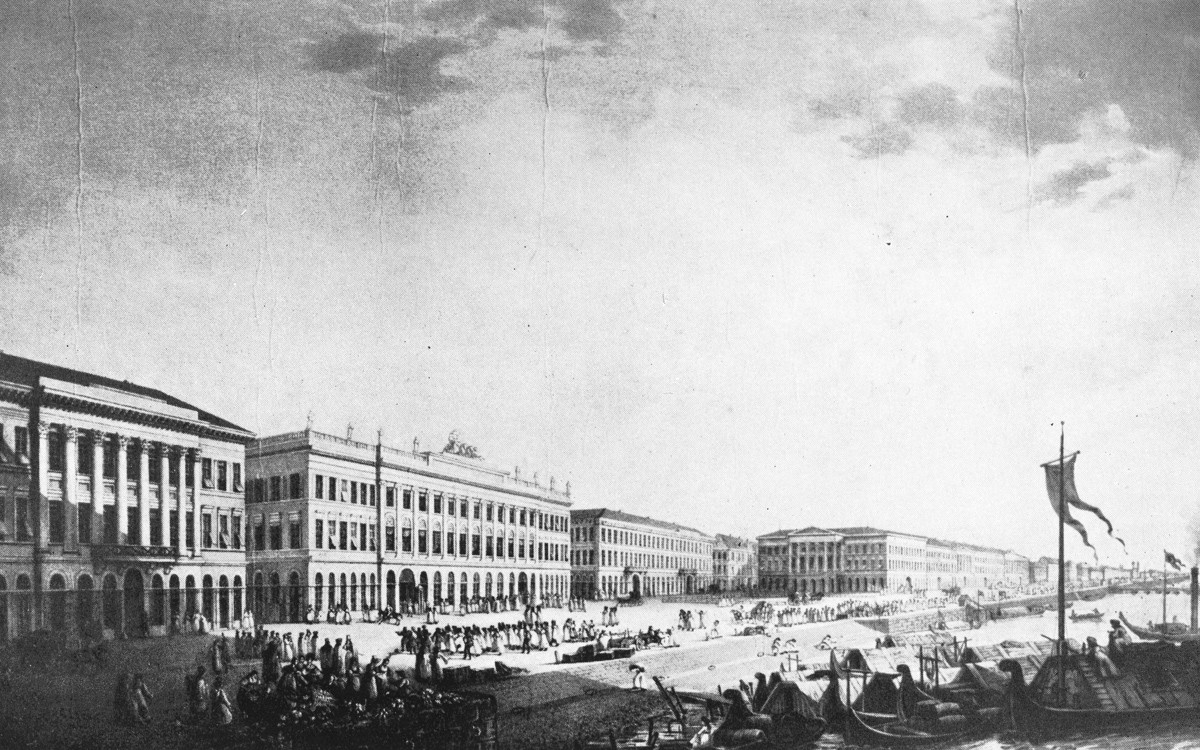 Lánchíd Square mainly showed the image formed in the first half of the 19th century, which was defined by the classicist palaces of József Hild. Its southern part was occupied by the Lloyd's Palace. The Libasinszky-Coburg Palace, the Nákó House and the main facade of the famous Europa Hotel ran parallel to the Danube, while the northern part was closed by a newly built Neo-Renaissance palace, the headquarters of the Hungarian Academy of Sciences designed by August Stüler. The coronation hill was erected in the middle of the square in the summer of 1867, where Franz Joseph made a solemn promise to defend the country. 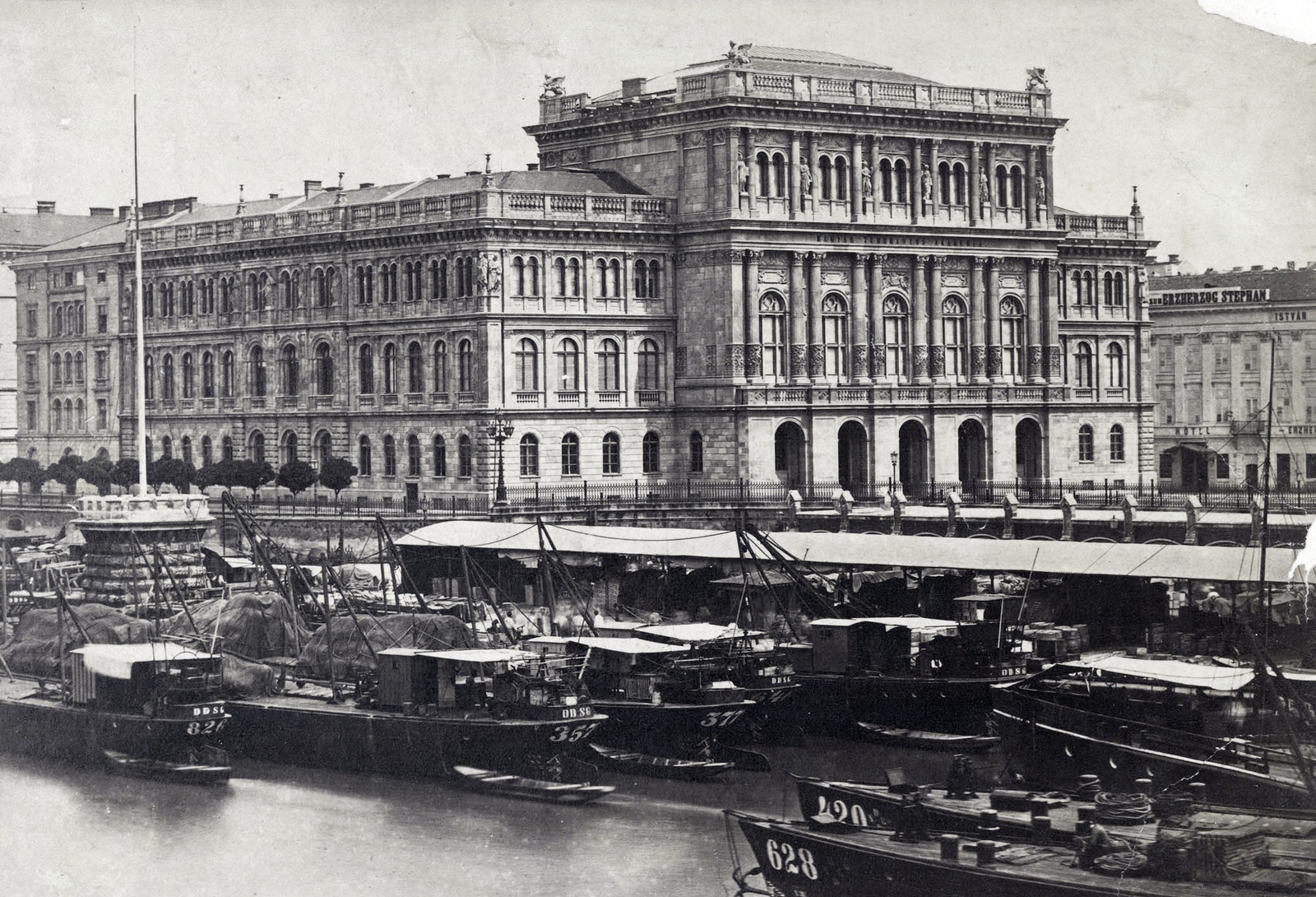 Headquarters of the Hungarian Academy of Sciences (Source: Fortepan/Budapest Archives, Reference No.: HU.BFL.XV.19.d.1.05.028)

The street leading from the square to the parish church in Lipótváros already had the name of Miklós Zrínyi, but the church itself - now known as St. Stephen's Basilica - did not look as it does today. Its designer was also József Hild, and of course he imagined the building to be in a Classicist style. His centrally planned design would have had four corner towers around a large dome. Since construction began as early as 1851, the dome was largely completed by the time of the coronation. However, poor quality materials were used in the construction, so on 22 January 1868, the dome collapsed. Hild could no longer see this because he had died the previous year. The work was then taken over by Miklós Ybl, who reworked the plans of his predecessor in the Neo-Renaissance style. 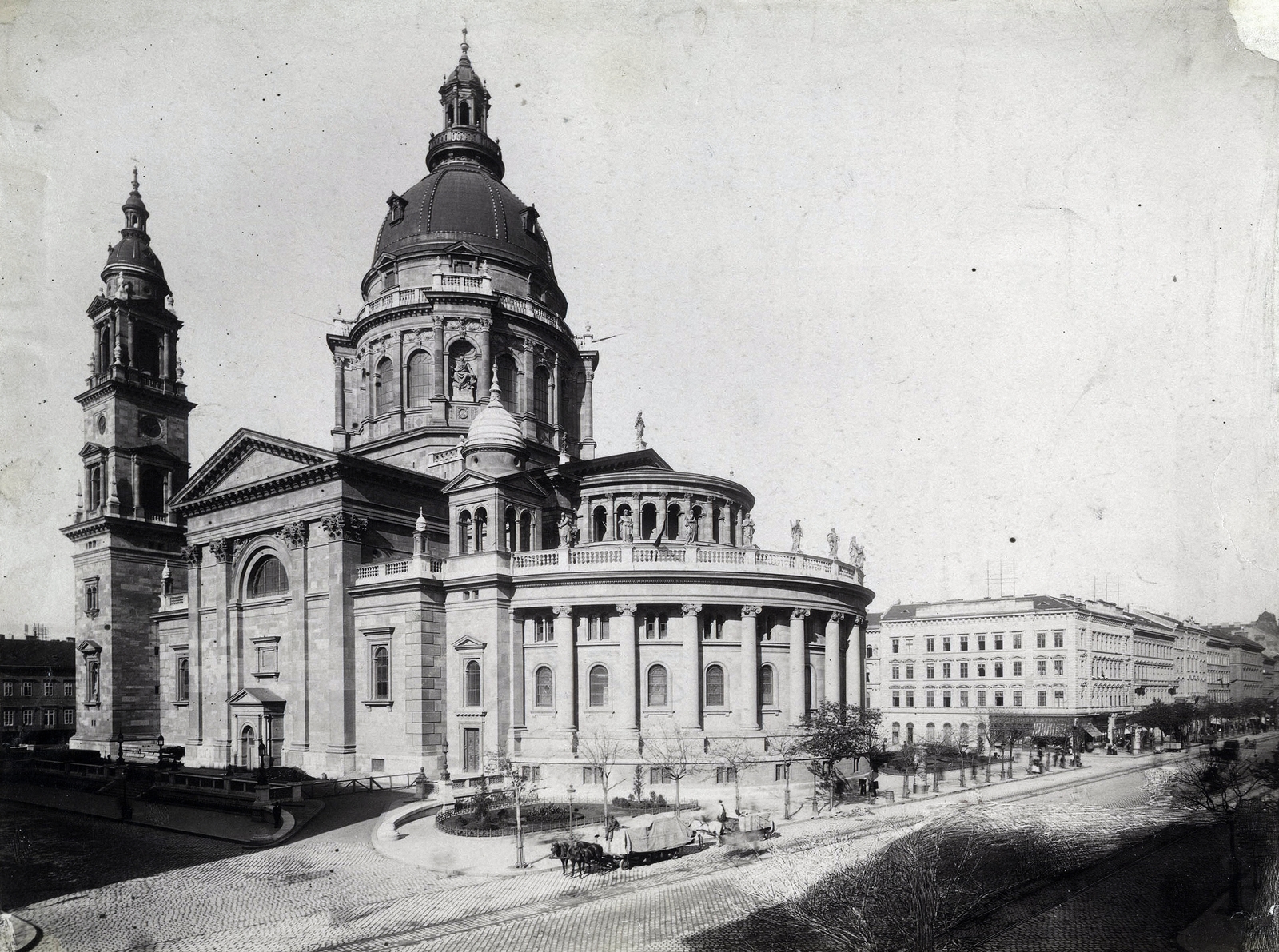 After the small detour, we got back to the line of the horse-drawn railway, which went north on the Váczi (now Bajcsy-Zsilinszky) Road, which was still quite a suburb at the time. Lipótváros has already been built, but on the site of Szabadság Square the huge building of the barracks called the New Building, which surrounds the square-shaped courtyard, has spread out.

At that time, industrial activity was still taking place on the site of the Parliament. The inner part of Terézváros already stood - which at that time included the later Erzsébetváros, they were separated only in 1873 - but its street network was not so grandiose: on the route of today's Andrássy Avenue, the narrow Könyök Street went towards City Park. 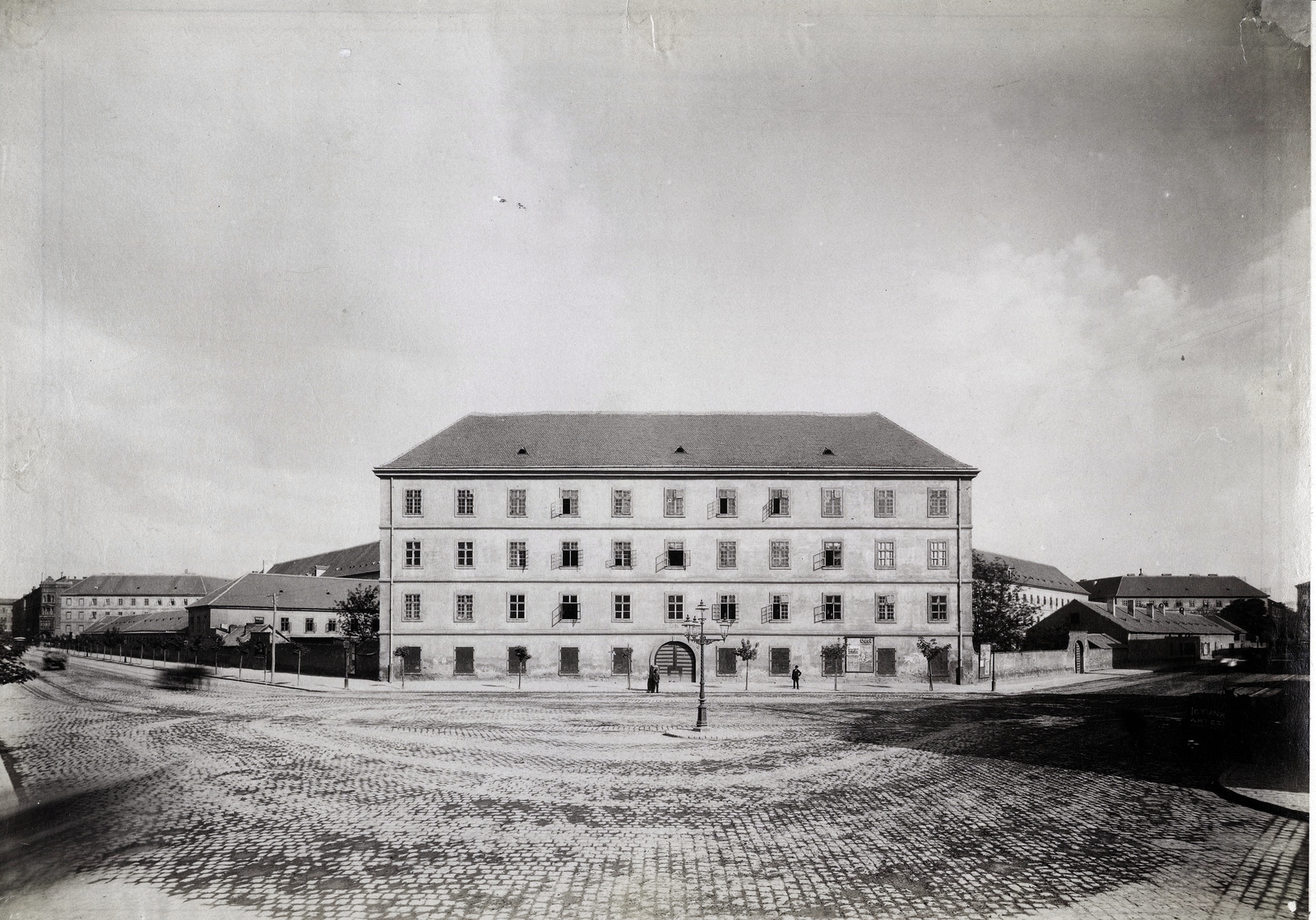 The section of the New Building between Báthory and Nádor Streets (Source: Fortepan/Budapest Archives, Reference No.: HU.BFL.XV.19.d.1.08.049)

The horse-drawn railway also affected the Pest railway station building, the predecessor of the Nyugati (Western) Railway Station, which was built in 1845–1846 according to the plans of Mátyás Zitterbarth. This is where the country's first railway line started to Vác. The first assembly ran out of this long, rectangular, classicist-style hall on 15 July 1846. By the time of the Compromise, more than two thousand kilometres of railway line had already crossed the country, and so the traffic of the station building had increased, but the Nyugati (Western) Railway Station was built only ten years later, in 1877. It is interesting that it was built around the old station building, so it could still receive the trains during the works.

The Pest railway station building was the predecessor of the Nyugati (Western) Railway Station (Source: wikipedia.org)

For imaginary sightseeing, we will now leave the line of the horse-drawn railway and cross to the other side of the Danube. Crossing the Chain Bridge, we got to the Népszínház Square, in the 1860s the Buda People's Theatre operated here. The short-lived theatre was established as a conversion of a former riding hall (designed by Károly Gerster and Lajos Frey), they only showed plays here between 1861–1870, after which it was demolished. However, the square was enriched with two new buildings: between 1860 and 1862, according to the plans of Miklós Ybl, the headquarters of the Buda Savings Bank was erected (which was unfortunately demolished after World War II), and then, just in the year of the Compromise, the construction of the Neo-Renaissance-style palace of the Chain Bridge Society, which we can still admire, began, also on the basis of Ybl's plans. 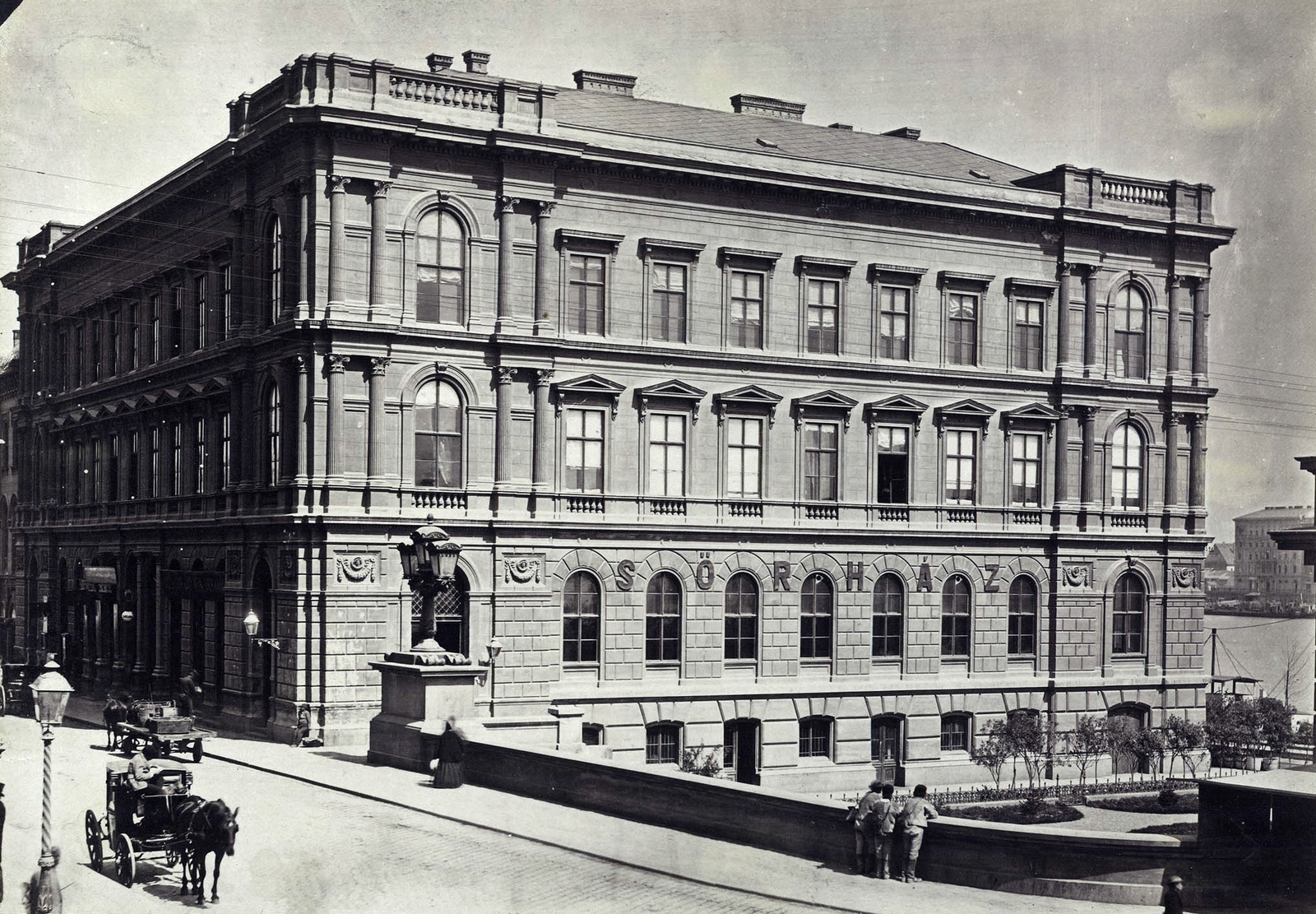 The Buda Castle Tunnel already showed its current image, not like the Castle above it. The length of the royal palace was only half that of today, with only the wings erected in the middle of the 18th century standing at that time. It did not have a dome either, but its central tract was crowned by a high roof built between 1827 and 1830, along with the third floor. The apartment of the current ruler was built here as well. In the south wing, in 1856, the Rococo suite of Archduke Albrecht was arranged, while the north was inhabited by his majordomo. However, this situation existed until 1866, when the Archduke and his court moved out of the palace and the whole became the ruler's. 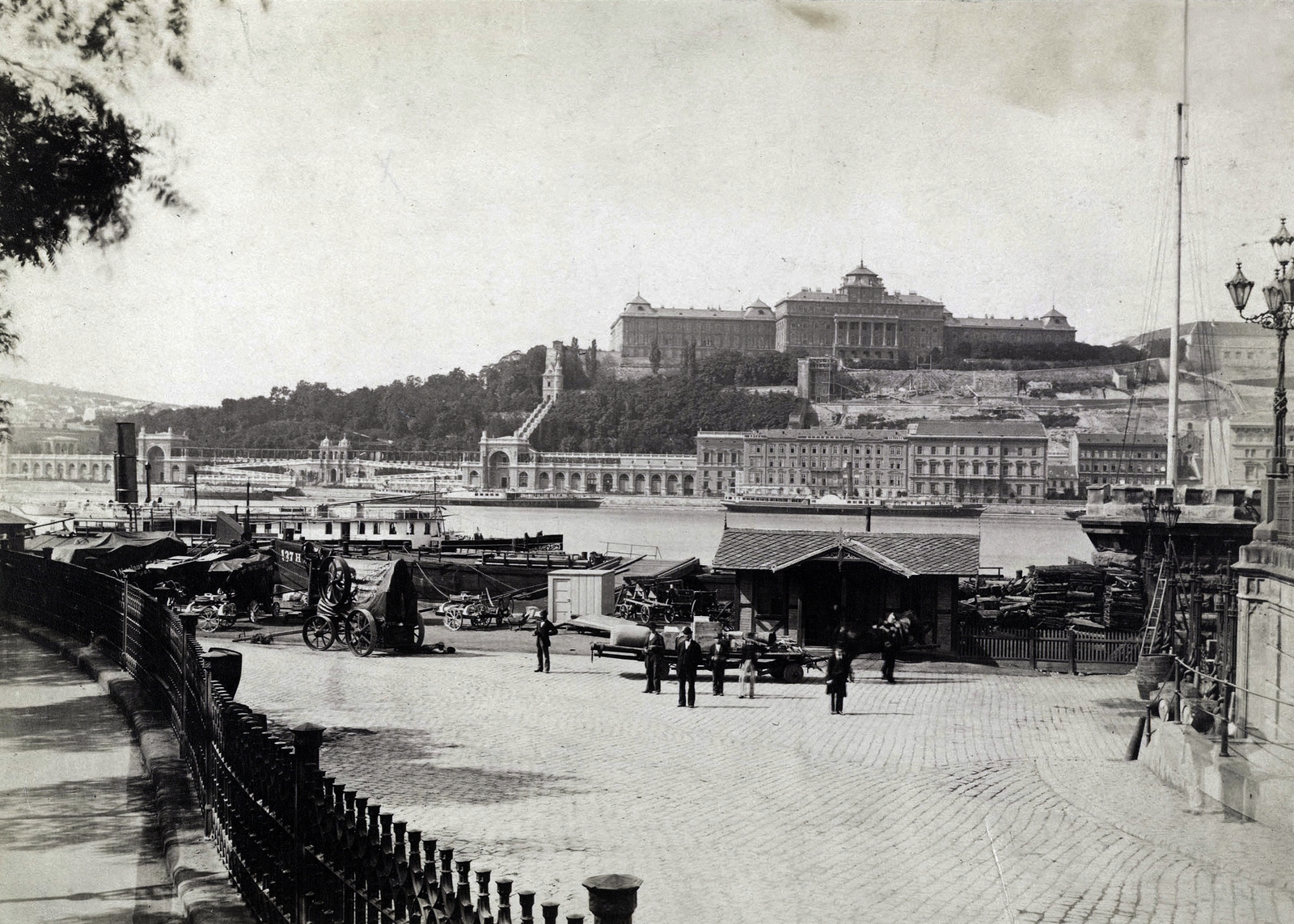 From the north, at that time, a large baroque arsenal, the Zeughaus with a rectangular floor plan and a spacious courtyard, was adjacent to the palace. In the middle of Szent György Square stood the statue of Heinrich Hentzi since 1852, who was the imperial captain of the Buda Castle in 1849 and fell in that place during the siege. Franz Joseph erected the Neo-Gothic monument at his own expense, it was of special significance to him. Therefore, although the Hungarians hated it, it was not demolished even after the Compromise, it was not removed from its place until 1899. 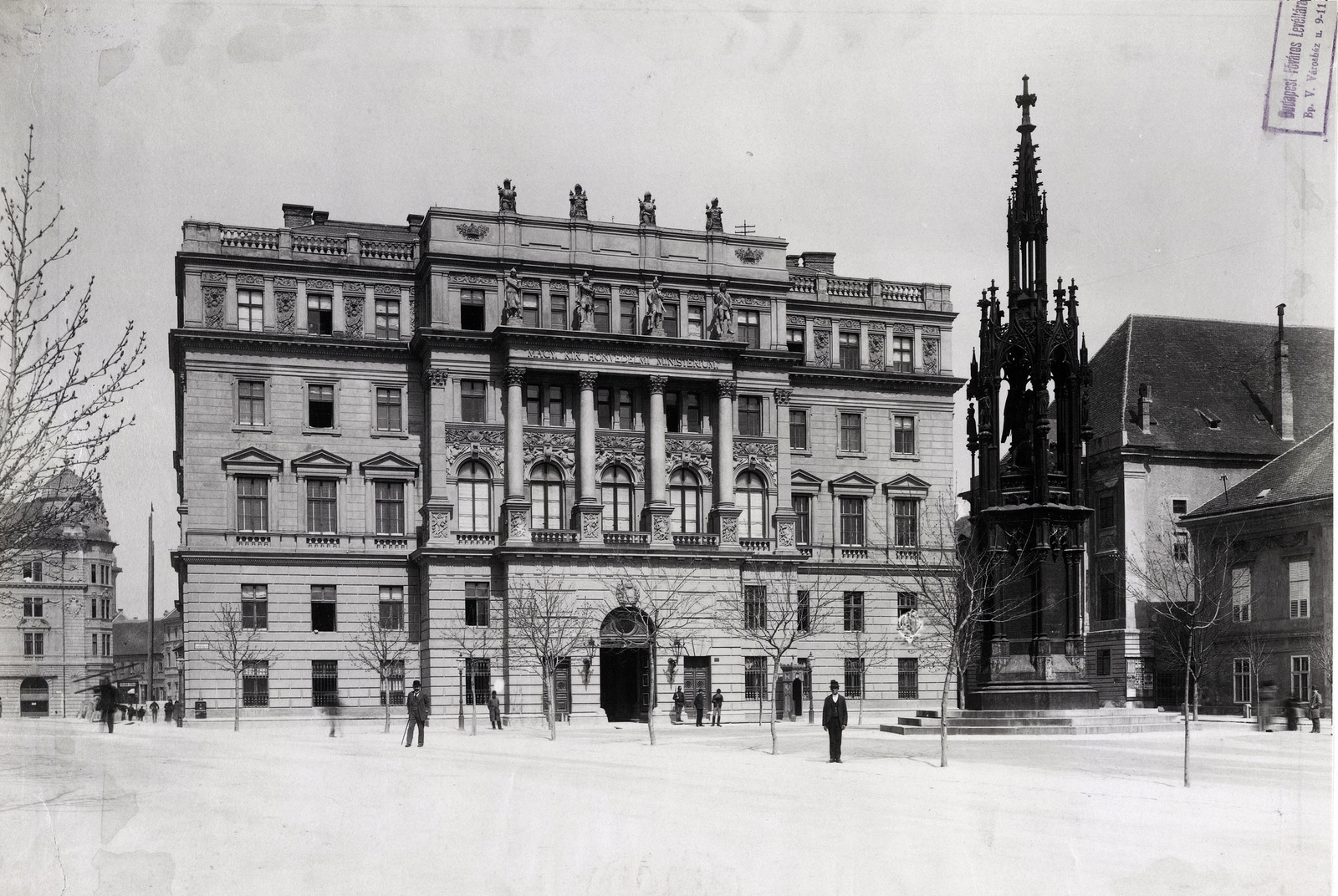 The Hentzi Monument and the Ministry of Defense in the background (Source: Fortepan/Budapest Archives, Reference No.: HU.BFL.XV.19.d.1.07.006)

At the time of the Compromise, Pest and Buda showed a completely different image, but in the next half century it changed, becoming a real world city, the results of which can still be admired today.

Cover photo: The Chain Bridge and the Royal Palace from the lower quay of Pest (Source: Fortepan/Budapest Archives, Reference No.: HU.BFL.XV.19.d.1.06.012)