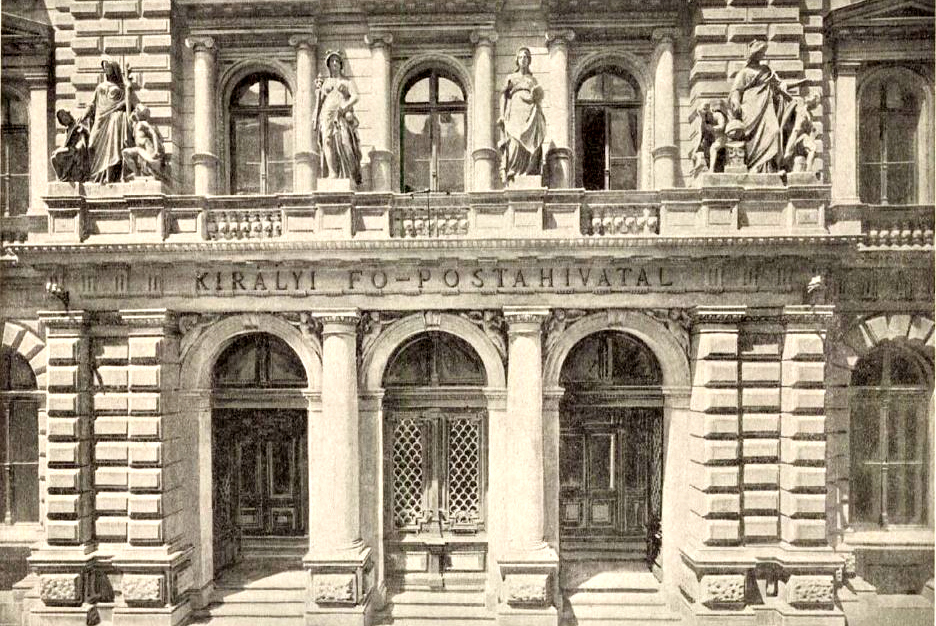 Two floors were built on it, but the historic building of the city centre Main Post Office still stands empty 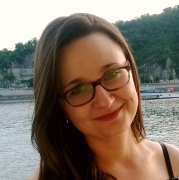 Almost 150 years ago, in 1873, the imposing building of the Royal Hungarian Main Post Office was completed in the city centre. The floor plan and cost plan of the postal palace bounded by three streets were prepared by Henrik Koch, and the plans for the glass roof of the inner courtyard were prepared by Antal Szkalnitzky. The historic building bordered by Petőfi Sándor, Párizsi and Városház Streets was also privately owned, and they wanted to turn it into a hotel more than ten years ago, but the former Main Post Office is still unused today.

In the 18th century, postal regulations were issued and postmasters were appointed in Vienna. A change took place only at the beginning of the 19th century: in 1840, a decree was published on the use of Hungarian-language return receipts, and in 1844, an article of law stated that the language of postal services was Hungarian and that even non-nobles could hold postal positions.

After the defeat of the War of Independence in 1848, the management and control of the post offices in Hungary were taken over by the comptroller under the Austrian Ministry of Trade and Economy. The staff of the offices were mostly Austrian, and the forms and postal stamps were changed to German.

The Compromise of 1867 brought about a major change in this situation, which stated that Austria and Hungary would organise and manage the postal service based on uniform principles, but separately. For this reason, the demand for the design of post office and telegraph buildings became greater and greater. 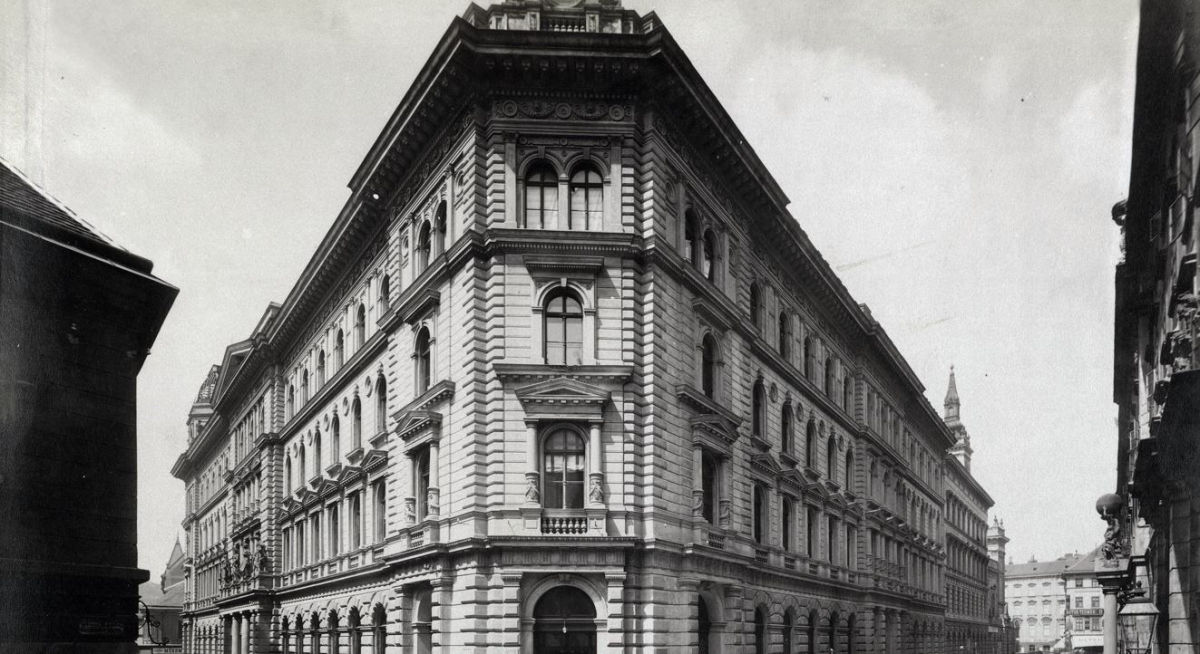 The Ministry of Agriculture, Industry and Trade, which manages postal affairs, set the goal of building a multi-functional, central office, which was also reported by the Budapesti Közlöny on 22 May 1869. The location of the new building was chosen near Szervita Square, which, according to an article published in Fővárosi Lapok on 20 January 1870, not everyone was happy about:

"They also want to build the post office and telegraph building on the land of the Servites, which, according to public opinion, should be left as open space. It is enough that the Danube bank is also being built in, and the government would do better if it appropriated old bad houses in suitable places, rather than occupying places that can be used in free space."

The article of law on the building of the post office and telegraph building to be built in Pest was adopted in July 1870. Budapesti Közlöny announced on 10 August that the state will allocate 226,342 HUF for the purchase of the plot, and 150,000 HUF for the work to start construction.

A tender was written for the design of the building, whose evaluation committee gave its opinion based on the following criteria in the 25 October issue of the aforementioned magazine:

"[...] in terms of appearance and taste, the building should be displayed in a manner suitable for a public building, but without luxury and with a frugality commensurate with its conditions; on the other hand, special attention should be paid to the fact that the building is purpose-built for service, and comfortably furnished for the public who come into close contact with the administrative offices of the postal and telegraphic institute."

Three plans and their corresponding budgets were received: the works of Henrik Koch, Károly Benkó and Ferenc Kolbenheyer, as well as Lipót Kauser and Lajos Frey. After a visual inspection of the submitted projects, the committee voted the design created by Henrik Koch as the winner. (The plans for the design of the inner courtyard praise the work of Antal Szkalnitzky, which is why the literature holds that the Koch-Szkalnitzky architect duo designed the building.)

The architect designed the home of the post office on the model of Neo-Renaissance residential palaces. The facade of the building is extremely ornate and demanding, a tender was also called for the statuary decorations on it, the works of which could be seen at the exhibition of the Society of Fine Arts:

"The May exhibition of the Society of Fine Arts opened with a completely new arrangement. [...] Our audience in the capital will be especially interested this time in the fact that in this exhibition, the symbolic designs of Engel, Kugler and Gastell, the sculptural decorations intended for the facade of the post office and telegraph palace, will also be exhibited"

– wrote the Fővárosi Lapok on 11 May 1872. The article also reports that among the sculptors, Franz Gastell from Vienna won the commission to decorate the facade.

Due to the specific function of the post office building, it was necessary to create rooms such as the post office, telegraph dispatch room, letter handling rooms, telegraph room and other office rooms, and these primarily required large, undivided spaces, the design of which was solved by using cast iron columns. The inner courtyard was covered with a glass roof designed by Antal Szkalnitzky. The supporting elements were produced in Schlick's iron foundry.

The Main Post Office building was largely completed by 1872, but the procurement auction for carpentry, glass, locksmith and painting works, as well as the installation of water and illuminating gas, were only published in that year. The relocation of the offices began on 4 August 1873, and the journal Ellenőr reported on 15 August that the postal service was already operating in the new building:

"Official operations have actually begun in the post office and telegraph palace today. The telegraph office has already moved here. For the sake of the public in the capital, we repeat that the dispatch room for telegrams is to the left of the main entrance in Uri Street."

The king, Franz Joseph visited the building in December 1873.

This is what the new, reinforced concrete slab hall of the telegraph office looked like after the renovation in 1897 (Source: Vasárnapi Ujság, 17 January 1897)

The building soon became cramped, some office space had to be moved to another building, about which the Budapesti Hírlap wrote in 1884:

"As far as we know, the premises of the Hungarian Royal Main Post Office building did not meet the needs right from the start, and some offices had to be moved to an apartment building outside the beautiful palace. Such a branch post office was opened in the Rostély Street wing of the Károly Barracks, where part of the carriage mail items are handled."

The hall of the Morse Department of the new telegraph centre (Source: FSZEK Budapest Collection)

The Main Post Office was divided into a total of 10 departments and employed 934 people, of whom 250 were officials and 684 were non-commissioned officers or servants who performed post office duties 24 hours a day.

"One of the most important institutions in our state, the Hungarian Royal Main Post Office, is rarely talked about in public. There are hardly any complaints or objections against it, there is no reason to scold it, because it is punctual and conscientious, not violent, but polite, and among the thousands of working members the order is bigger than among all the policemen of Central Europe combined."

– with these words, in 1899, Budapesti Hírlap praised the precise work being done in the Main Post Office building.

The hall of the Hughes Department of the new telegraph centre (Source: FSZEK Budapest Collection)

In 1907, a new, large telegraph centre with a reinforced concrete roof structure was created on the third floor of the Main Post Office building on the side facing Párizsi and Petőfi Sándor Streets. In the new rooms, 80 new Hughes (printing telegraph) machines and 120 Morse devices were placed for the reception and transmission of telegrams. The construction manager was architect Rezső Ray, the reinforced concrete roof was designed by Szilárd Zielinski. 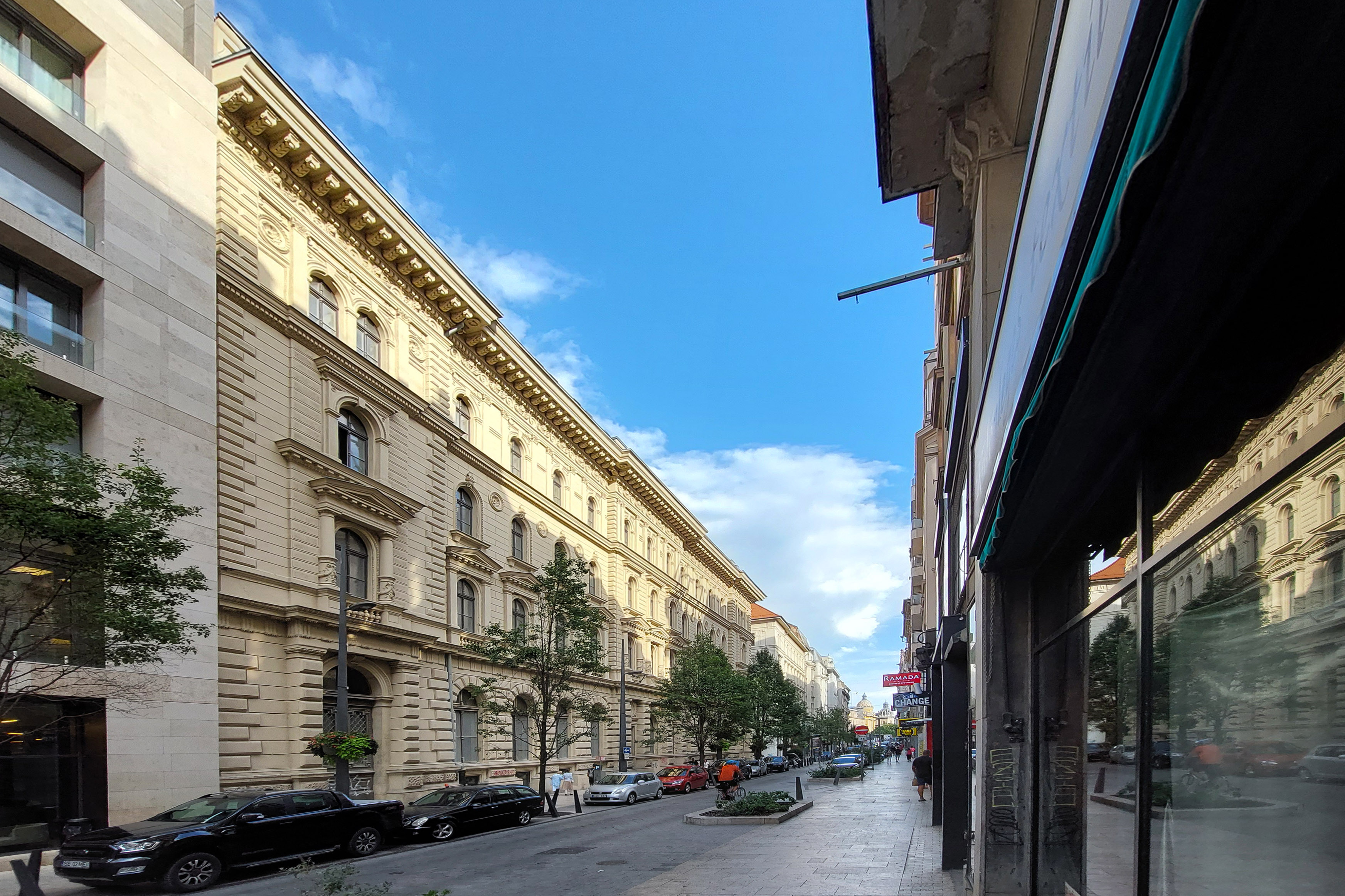 "The total length of the new machine room is 93 metres, its width is 16 metres and its height is 10 metres; its roof structure was made of reinforced concrete according to teacher Zielinszky's plans: its interior equipment is unmatched both from a technical and hygienic point of view. [...] The lavatories rightfully line up next to the machine room; the furniture here as well, like the entire equipment, painting, etc. is kept in Hungarian style, the dormitory has 20 beds available for those who take turns in the night shift" 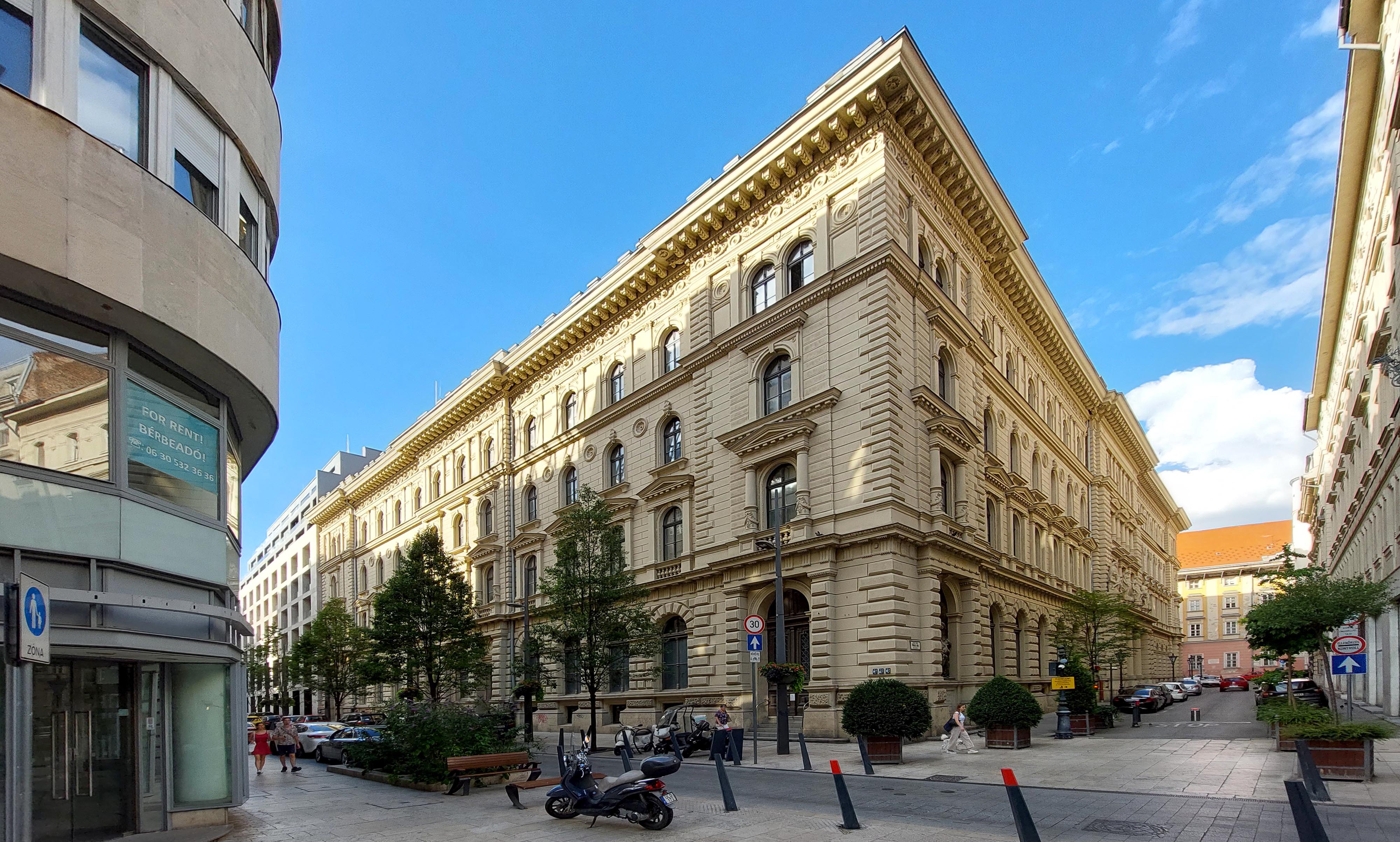 The former building of the Main Post Office nowadays from the corner of Petőfi Sándor and Párizsi Street (Photo: Balázs Both/pestbuda)

The historic post office building was sold by Telekom Rt. in 2006. The new owners were obliged by the Heritage Protection Office to carry out the renovation, which took place between 2006 and 2007. More than ten years ago, it was announced that the building would become a five-star luxury hotel. In 2012, the Central Architectural-Technical Planning Council approved the plans for converting the building into a hotel, the design of 239 hotel rooms, as well as the construction of two floors on top of the listed building, in such a way that only the part above the telegraph room remains of the original roof. An underground garage was planned under the inner courtyard, a restaurant on the Párizsi Street side, and a beer bar on the Petőfi Sándor Street side, and according to the ideas at the time, Hungarian Post would also have rented premises in its old home.

Both the domestic and foreign press wrote in 2018 that the five-star hotel would be completed by 2020, but the building is still empty for the time being. It really cannot be seen from the street front, but the planned two-story extension has already been completed, and currently looking into the courtyard, the scaffolding that covers the inner facade in several places can be seen. As it stands now, it seems that visitors still have to wait for the former Main Post Office to open its doors as a hotel.