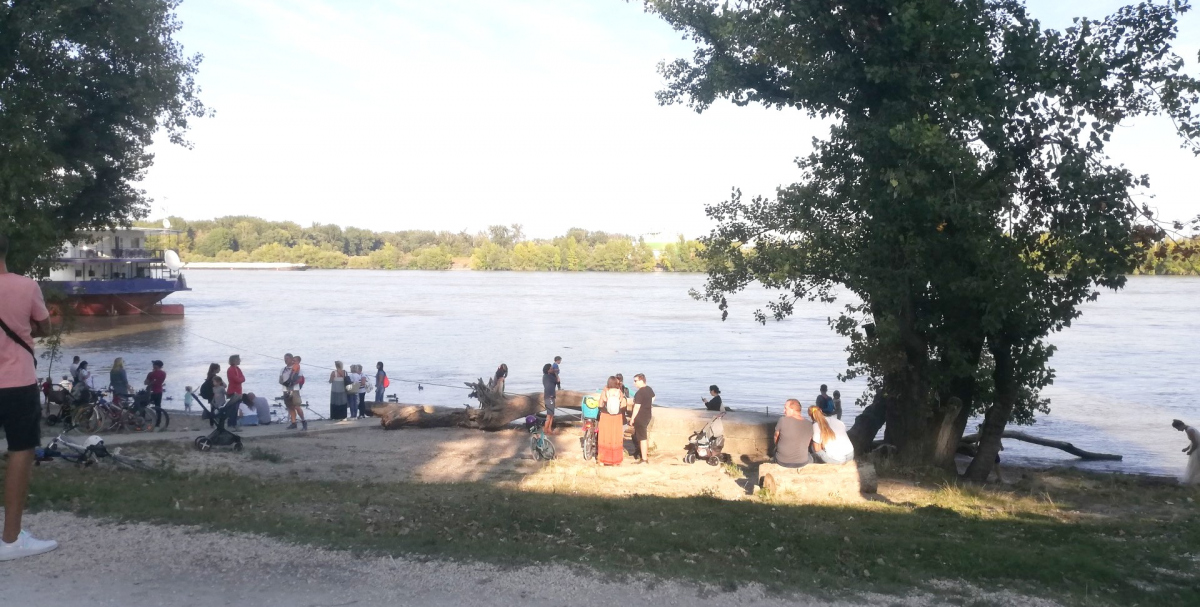 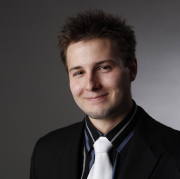 If swimming or eating 'lángos' means relaxation, people usually think of Lake Balaton as a destination. However, Roman Beach offers a similar opportunity in Budapest. The first legal public Danube beach in the capital opened here in the summer of 2021 - after a long break. But the Roman Beach is much more than that. The area is the only place offering a real waterfront experience along the Danube section of Budapest, its special milieu captivates the visitors. If someone really wants to get to know the five-kilometre beach, get ready for a multi-hour trip as Pestbuda reporters did. Take a closer look at the beach with the author.

The Roman Beach was once a Mecca for rowers, in essence, Wesselényi and Széchenyi also supported rowing sports. As the area was built in, the water quality gradually deteriorated, so guests were not allowed to bathe on the Danube in the 1970s. So it felt a bit like walking on a beach without water, as in the great summer heat for years only the refreshing gates were the only water experience.

Of course, buffets, ice cream parlours, smaller places, mostly providing alternative culture, flourished, as for those living in the 3rd District, this place was the entertainment district. This summer, however, the public beach has also opened, so the Roman Beach is also a great place to relax for those who prefer this kind of waterfront atmosphere. 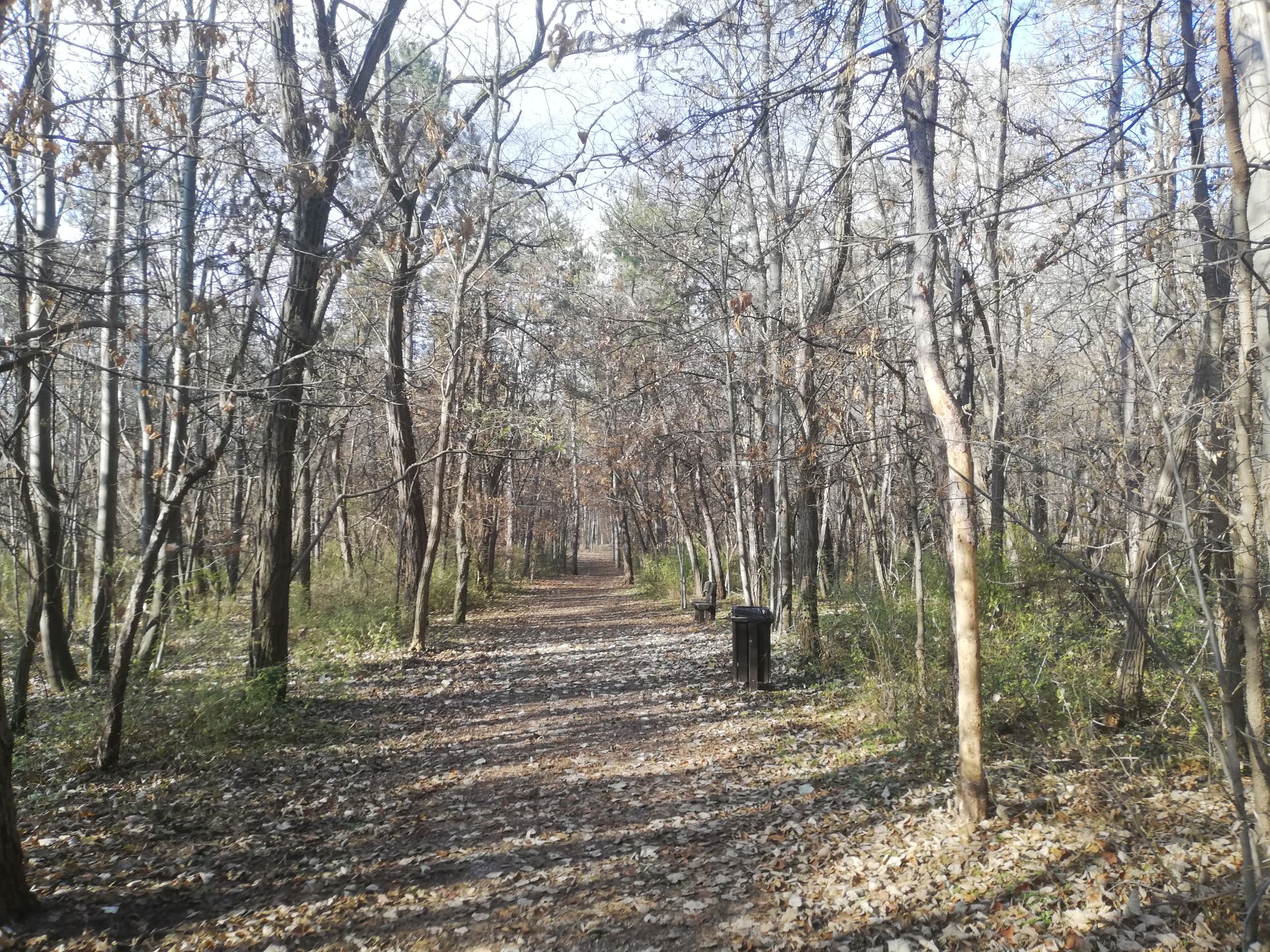 There are also buffets right on the beach (Dávid Palotás/pestbuda.hu)

It is worth approaching the beach in style with the BKK boat service. In the city centre, the BKK boat service can be reached from essentially all waterfront junctions in Buda and Pest. If visitors do go by bus, they have to get on bus 34 at the Árpád Bridge metro station, and they can easily walk ashore from essentially any stop on Királyok Road. Bicycles are also a good way to get to the beach, but at weekends and in the summer, crowds can make it difficult to get around. Those arriving by car are provided with several parking options: not a single large car park should be envisioned, but many smaller ones, often directly along the roads.

The delimitation of the Roman Beach is not clear even today, as many sources mention many sections. Based on what he has experienced there, the author thinks of this section as a whole from the north of the Northern Railway Connecting Bridge all the way to the administrative border of Budapest, to the beginning of the Barát Stream. This is a fairly long stretch of coastline, almost 5 kilometres, but it is coherent in terms of its development and infrastructure.

The walk started from the south, across the railway bridge. The wooded grove is typical for the whole beach, fortunately, the old specimens have survived. It is certainly known that they want to build a dam along the coast, which has provoked a great deal of opposition. If the dam were to be built, the trees would not survive. 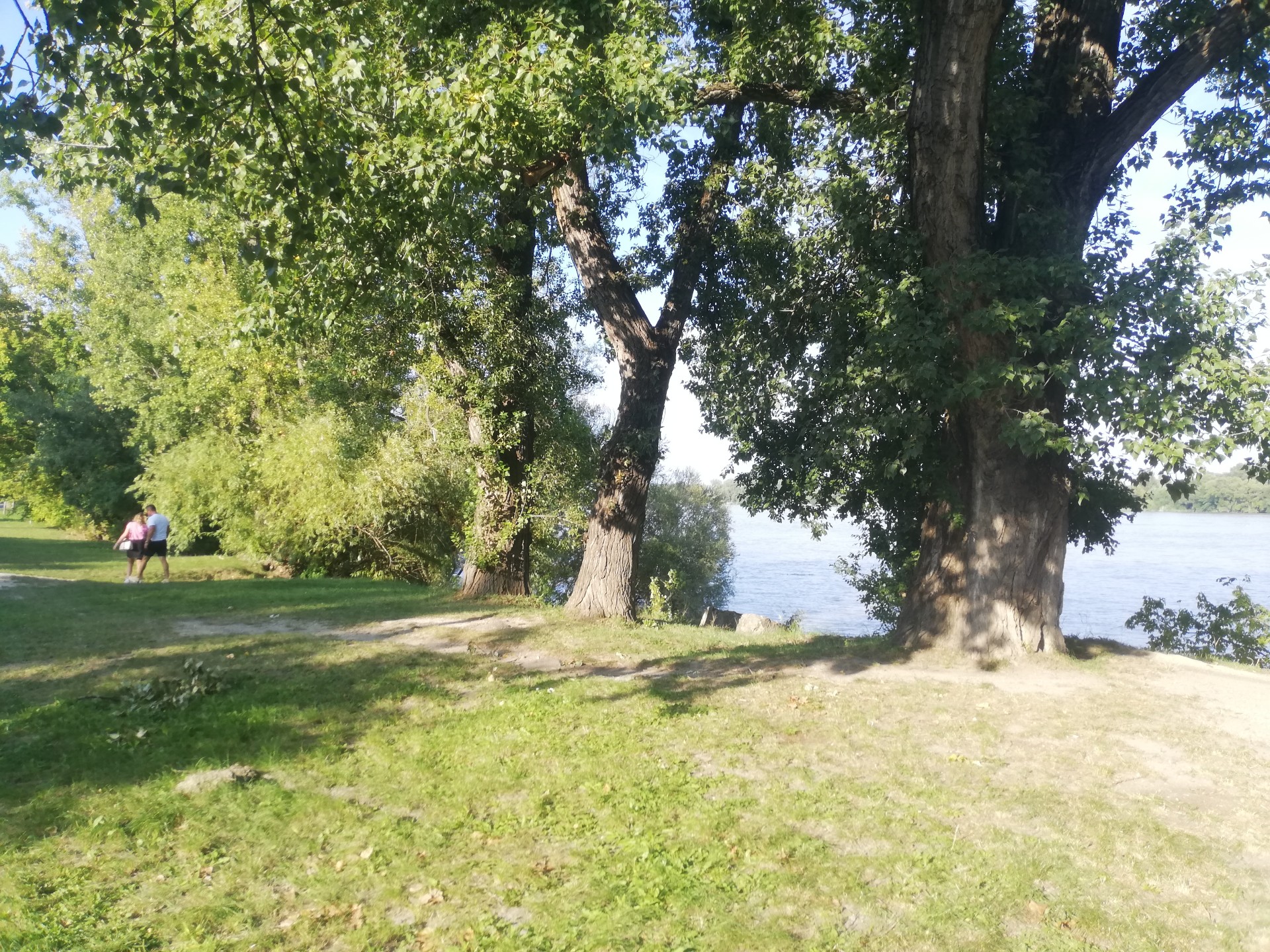 The atmosphere would be completely different without the older trees that now surround the beach (Photo: Dávid Palotás/pestbuda.hu)

If the visitors head from south to north on the promenade called the Roman Beach, they will slowly come across more and more buffets, bike rentals and benches. The pavement is partly asphalt, partly gravel and partly concrete, the latter might be worth standardising in the future. Aside from this little inconvenience, the journey gets everyone down to the rabbit hole: buffets, fish roasters, cafés, ruin pubs, beanbag-armchair recliners and spaces decorated with retro-style lamps are lined up alternately on the shore, on the piers and the ships.

The hustle and bustle of the evening make the place look like we are really walking on a promenade on Lake Balaton. Loud music is played almost everywhere, and the swirling smell of different foods captivates the senses. Pestbuda would not like to single out one or two places by name, mainly because of the high degree of fluctuation. In any case, the author did not come across a specifically bad buffet, but they only sampled five. The number of piers has increased recently, so today anyone can sip their favourite drinks by rocking on the Danube.

The BKK boat moors at Rozgonyi Piroska Street, which is the catering centre on the beach. As visitors walk north, more and more water sports come to the fore: more and more boathouses, boat pullers, docks. A few hundred metres north of the port is the newly created public beach. On the sandy-pebble narrow shore, everyone can take a dip in the Danube to a water depth of 120 centimetres. A real refreshment. The only problem is that it was closed at the end of August, so bathing is only allowed in the greatest summer heat. 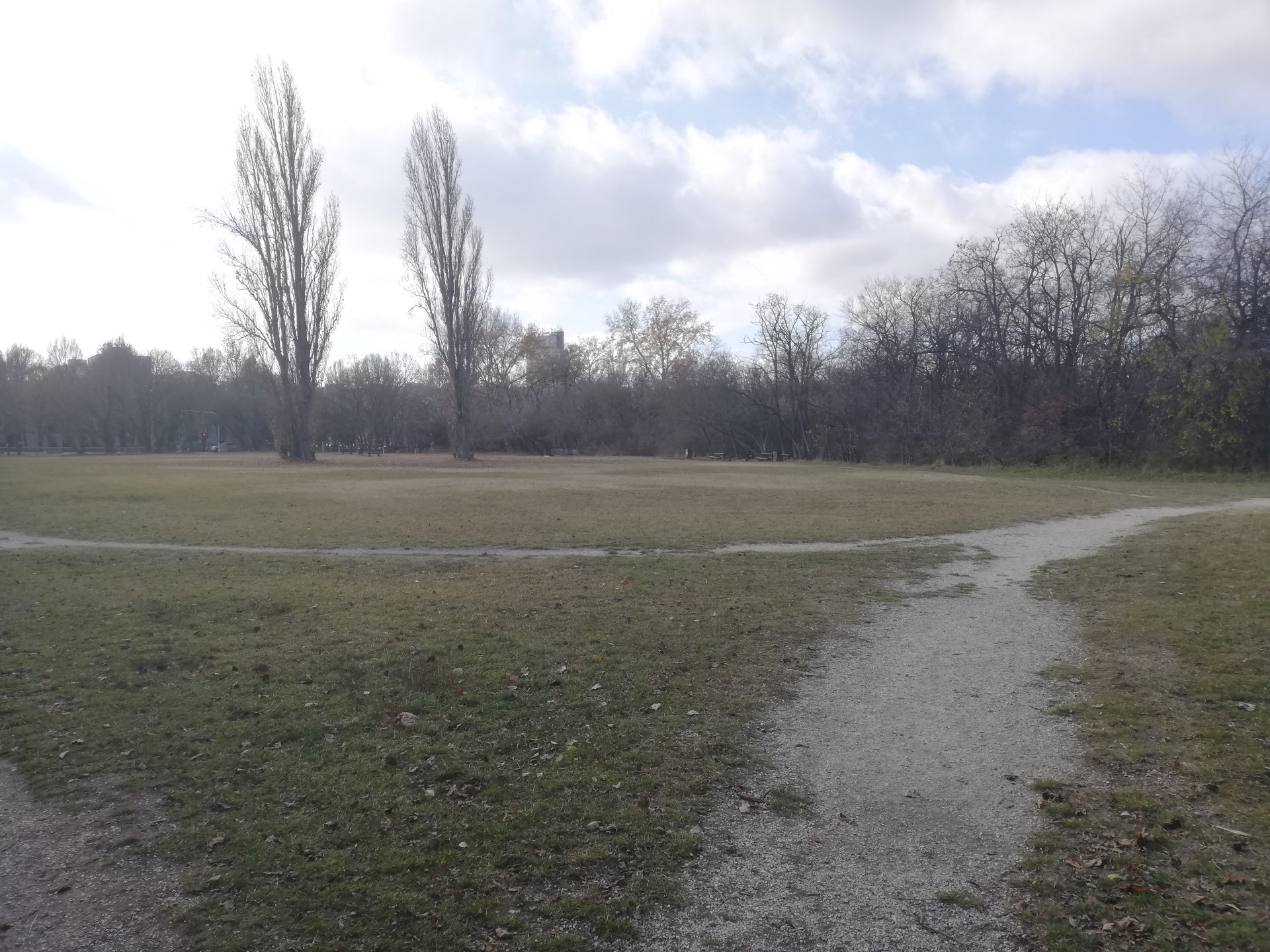 The beach is perfect for relaxing or even lying down (Photo: Dávid Palotás/pestbuda.hu)

Further north, from Szent János Road, the bike path begins, which is a bike path only in its name, but because of the smaller crowd, it is more usable. The realm of kayakers-canoers is this part of the coast, spiked with restaurants. Continuing north, there is a tennis centre, playground, SUP rental alternating each other, and then the top (or the bottom) of Szentendre Island can be reached. By now, the crowd and loud music are already faded, more and more nature is taking over the main role. Visitors can go down to the shore here and there, the sunrise can certainly be beautiful from here with the rocking boats on the Danube.  The other coast side is no longer built-in here, no buildings rise above the Danube. The confluence of the Danube is especially beautiful when viewed from here.

Further north, from Szent János Road, the bike path begins, which is a bike path only in its name, but because of the smaller crowd, it is more usable. The realm of kayakers-canoers is this part of the coast, spiked with restaurants. Continuing north, there is a tennis centre, playground, SUP rental alternating each other, and then the top (or the bottom) of Szentendre Island can be reached. By now, the crowd and loud music are already faded, more and more nature is taking over the main role. Visitors can go down to the shore here and there, the sunrise can certainly be beautiful from here with the rocking boats on the Danube.  The other coast side is no longer built-in here, no buildings rise above the Danube. The confluence of the Danube is especially beautiful when viewed from here.

A concrete dam from the legendary  Pünkösdfürdő beach protects the area from flooding, and a bicycle path and sidewalk have been included on this. Unfortunately, due to the dam, the forest was cleared in a fairly wide band, but at least the vegetation had already begun to reclaim its place. 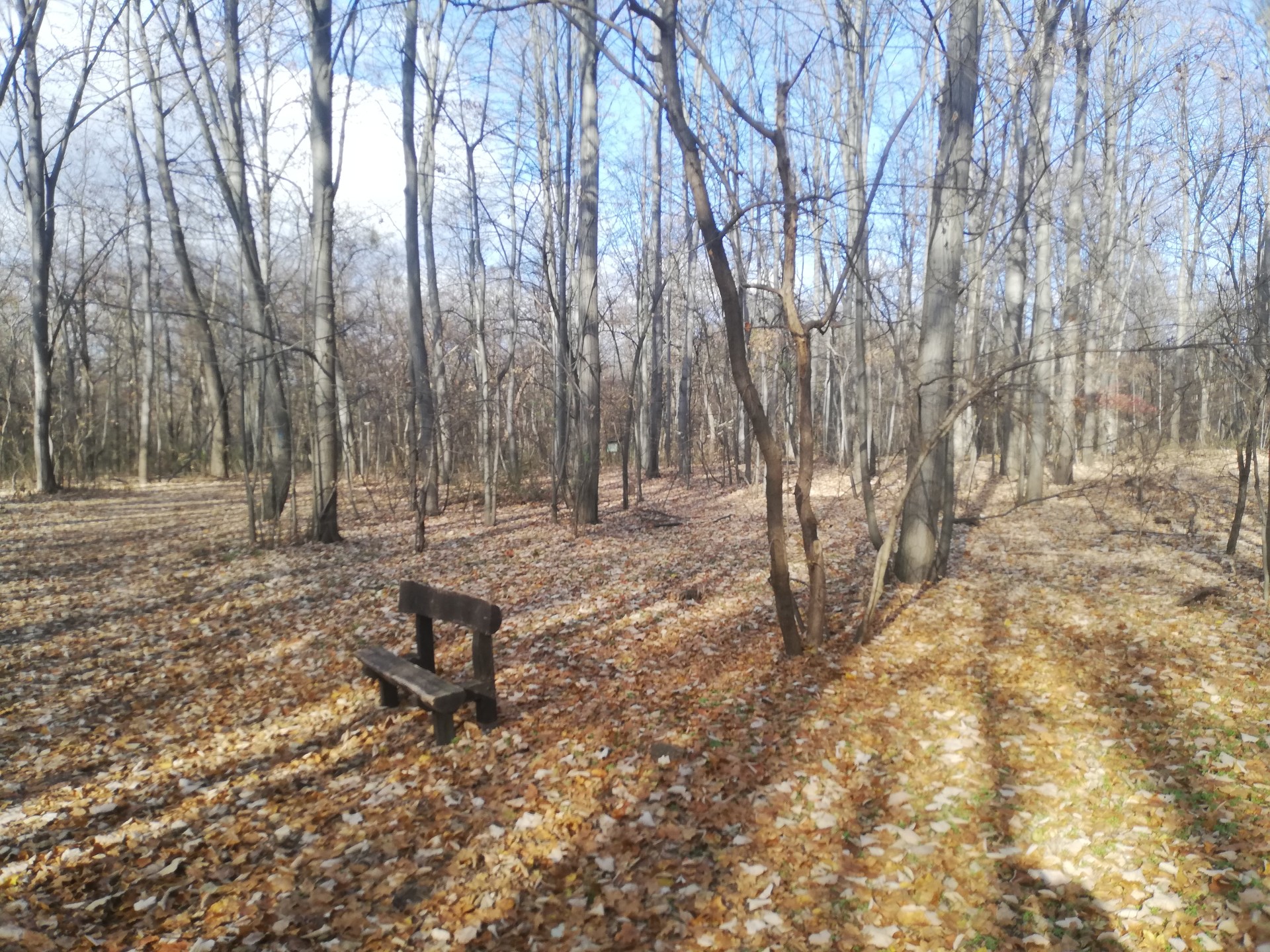 The bike path runs along the dam (Photo: Dávid Palotás/pestbuda.hu)

Here, but also further south, there are more and more anglers, because in several places they can drop the hook from favourable places. The height of the dam of a few metres is a kind of highlight on the shore, the Danube is almost can be seen (which here only applies to the Szentendre branch), providing an exceptional view. The buffets are also further away, we reach a garden city, the landscape is quieter and more peaceful, which is only broken by the sound of a speedboat. 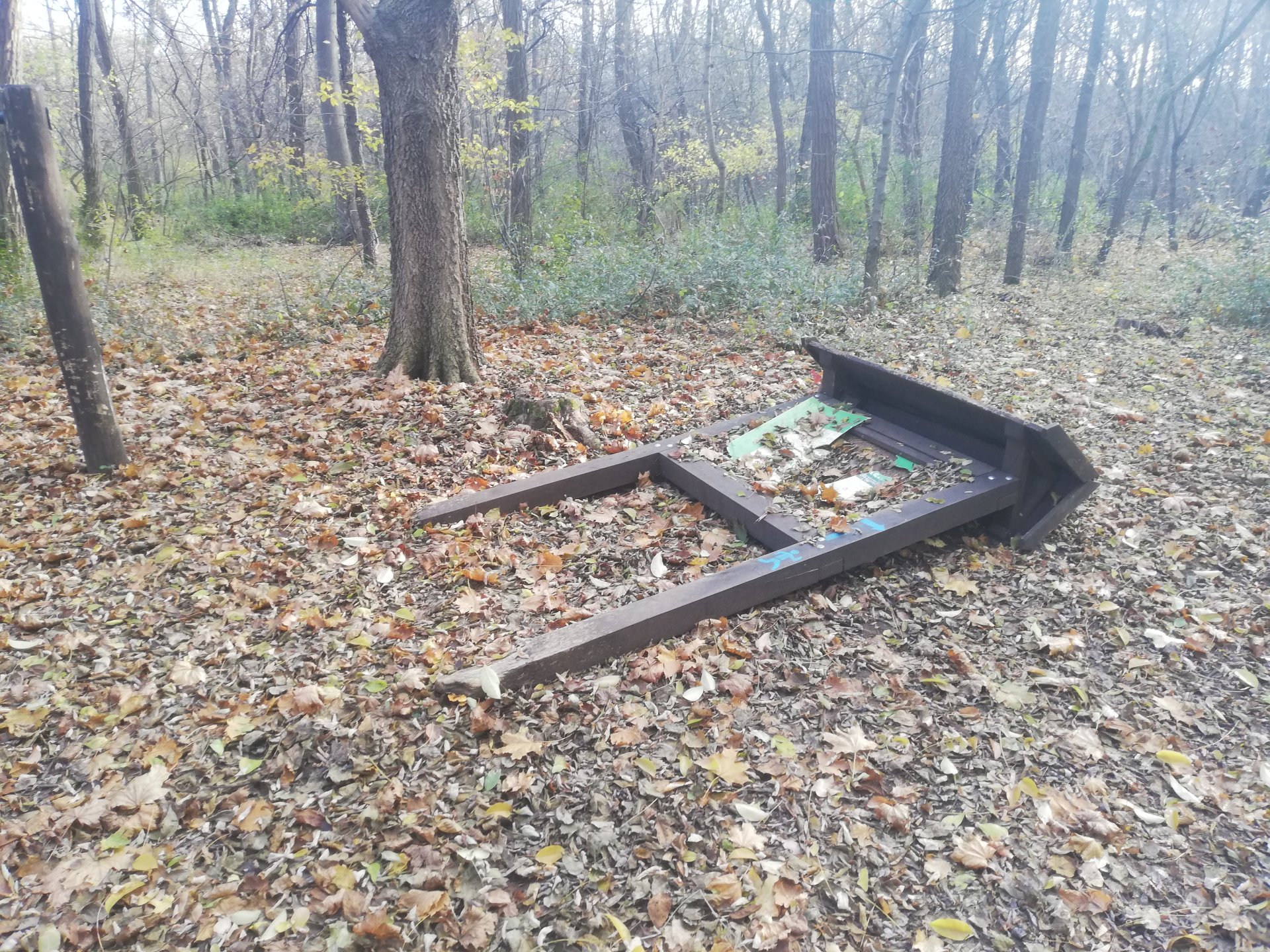 Budapest ends at the mouth of the Barát Stream, but the bike path continues all the way to Szentendre, and even to the Danube Bend, so whoever can, go through this section, because it is very nice to go through the swamp forest and admire the water of Lake Lupa. 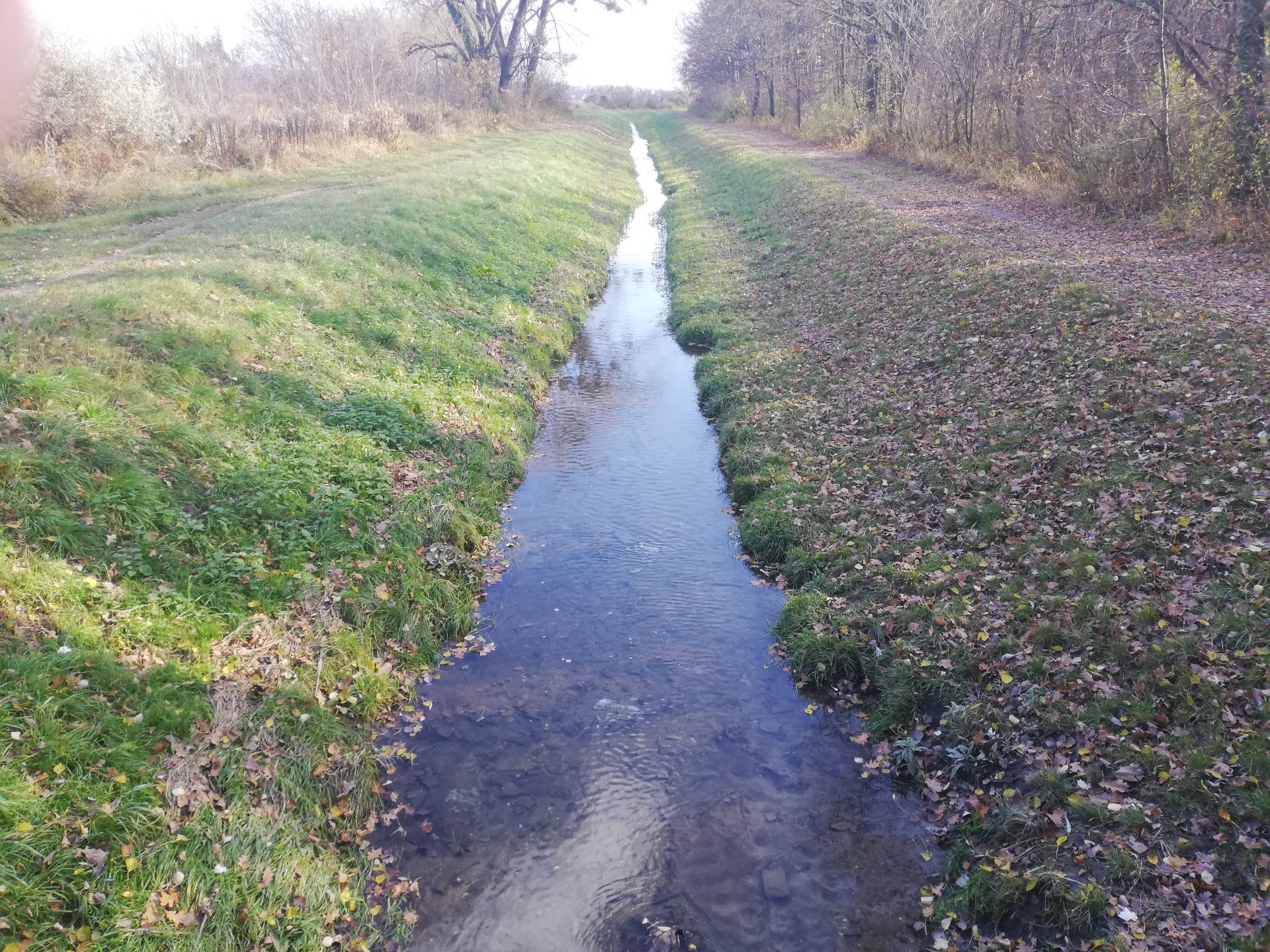 The mouth of the Barát Stream (Photo: Dávid Palotás/pestbuda.hu) 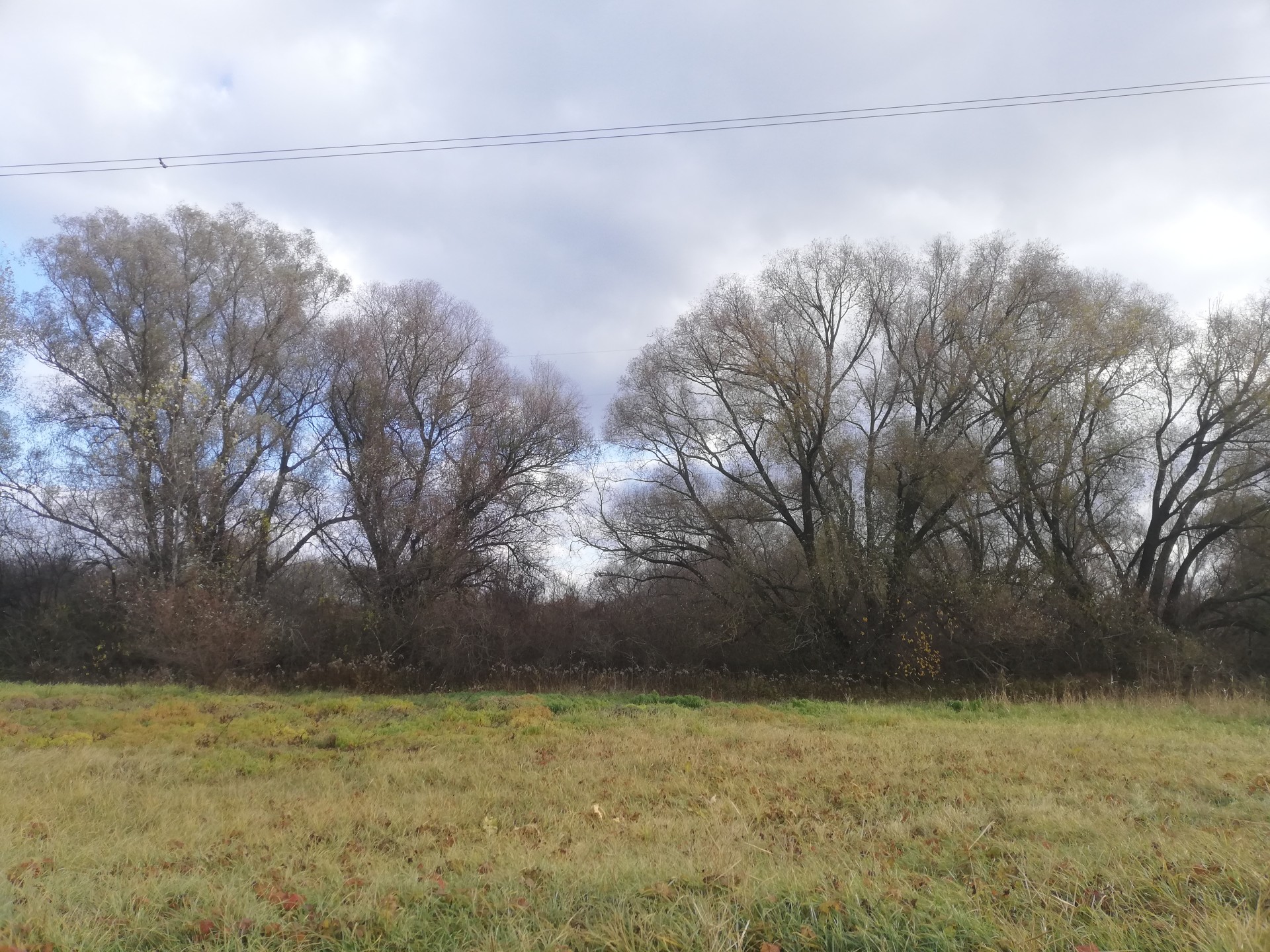 Today, the Roman Beach is both an experience for those who want to have fun and hikers at the same time, but it is impossible not to notice that, unfortunately, the denser urbanisation of the whole city is taking away the charm of the greener parts. Perhaps one can believe that there is a state of equilibrium, and the Roman Beach is still at this stage, which would be great to preserve. During our walk, Pestbuda even met older men who brought and took their boats and still visit the coastal bays, small islands, floodplain forests.

Óbuda has two very great assets, the Mocsárosdűlő and the Roman Beach. We trust it will retain its natural and cultural value.

It no longer belongs closely to the Roman Beach, but a typical example of new construction is the forgotten landscaping of the area under the Megyeri Bridge. 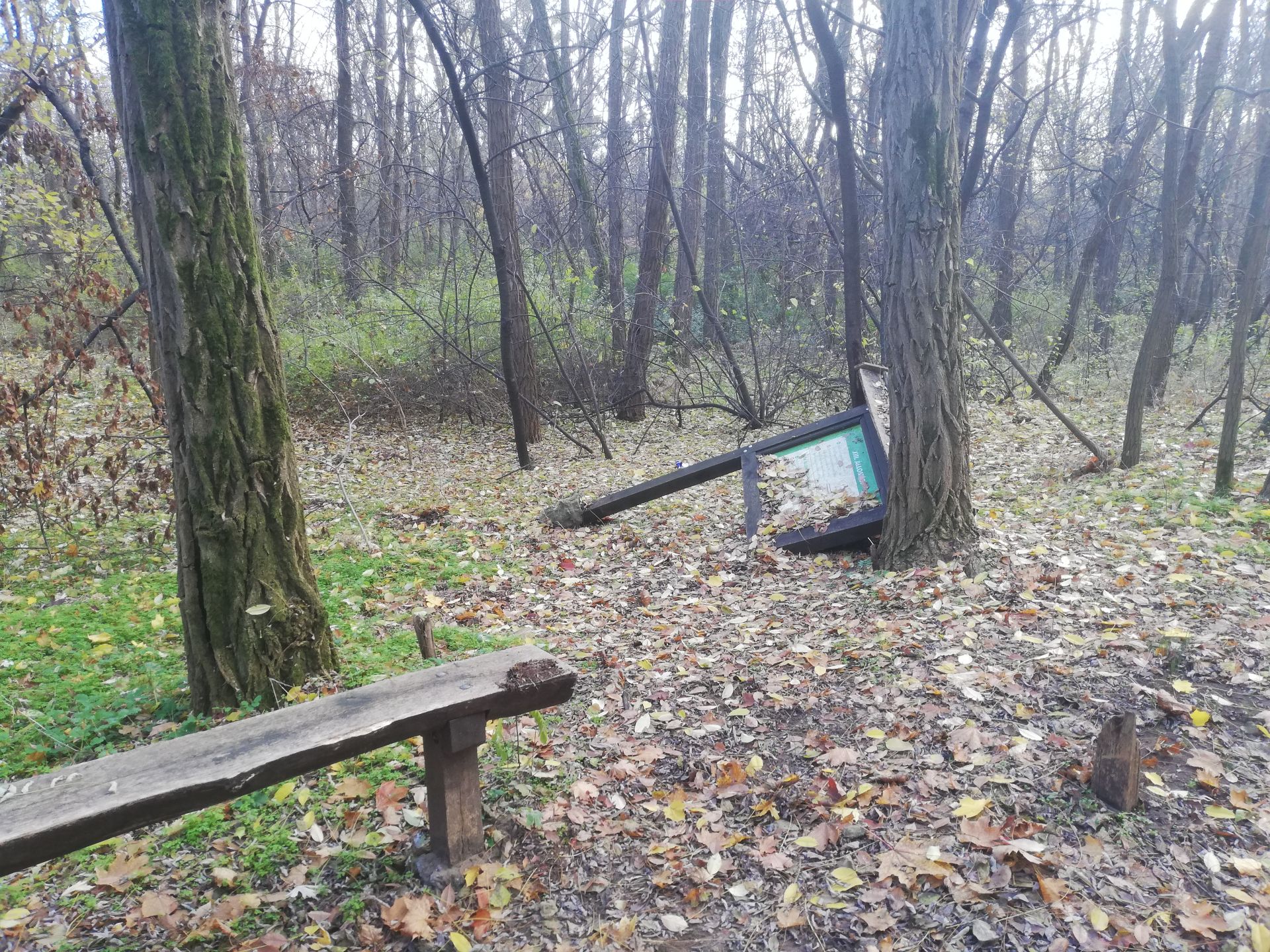 Visitors are welcomed by a well-organised beach north of Budapest (Photo: Dávid Palotás/pestbuda.hu)

If the readers feel like exploring the Roman coast, there are plenty of interesting places and activities in the area. Tennis, basketball and football courts are also available for sports enthusiasts. Those looking for wakeboarding and similar, more extreme water experiences will find this on nearby Lake Lupa.

A little further north for those looking for natural values, the swampy gallery forests can be a real recreation. For those who want a built heritage, the buildings of the old boathouses or the huge open-air exhibition spaces and demonstrations of the nearby Aquincum (south of the railway bridge, on the other side of the bridge) can be a delight. There are also many cultural and entertainment programs: there was an equestrian gladiator show in Aquincum when Pestbuda was there, and clowns on stilts entertained the children on the Roman Beach.