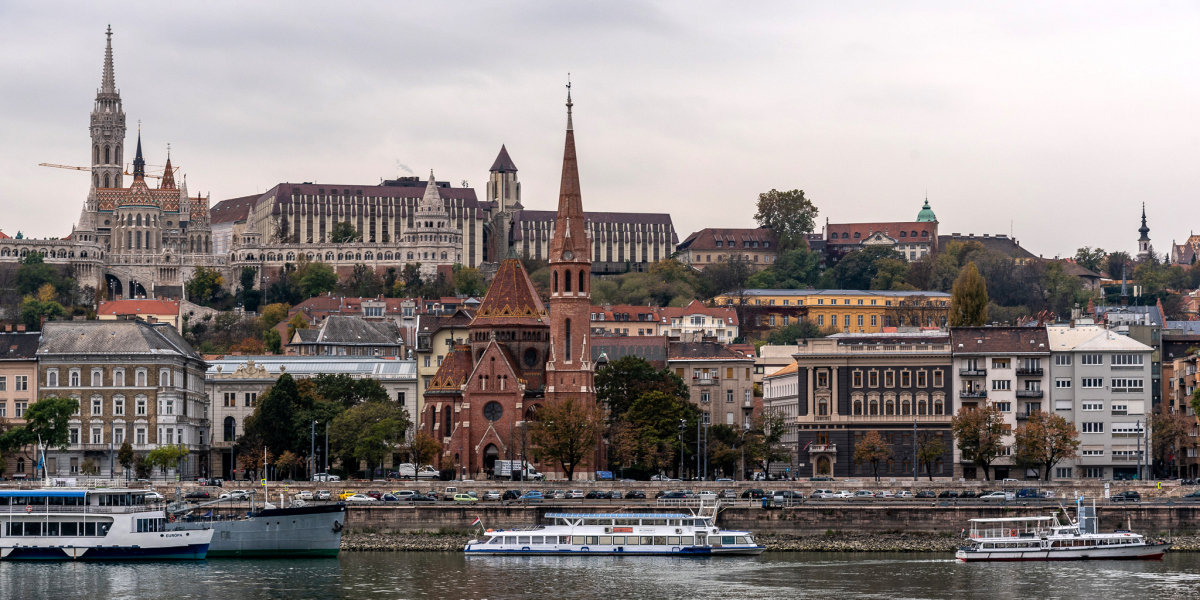 The Szilágyi Dezső Square Reformed Church was taken over by the faithful on Palm Sunday of 1896, so this year it celebrated the 125th anniversary of its construction. The Parish kept track of the anniversary and two years ago began the interior renovation of the building, which was largely completed in March. Due to the month of architecture - and as the Reformation Day approaches - Pestbuda was able to see what the new interior became like.

A tender was announced for the construction of the first Reformed church in Buda at the end of 1891, which was won by Samu Pecz with a characteristic plan with a pentagonal floor plan. The great architect took advantage of the convention-free, unspecified possibility of the spatial organisation of the Reformed Church and implemented an arrangement that adapts to the order of worship. 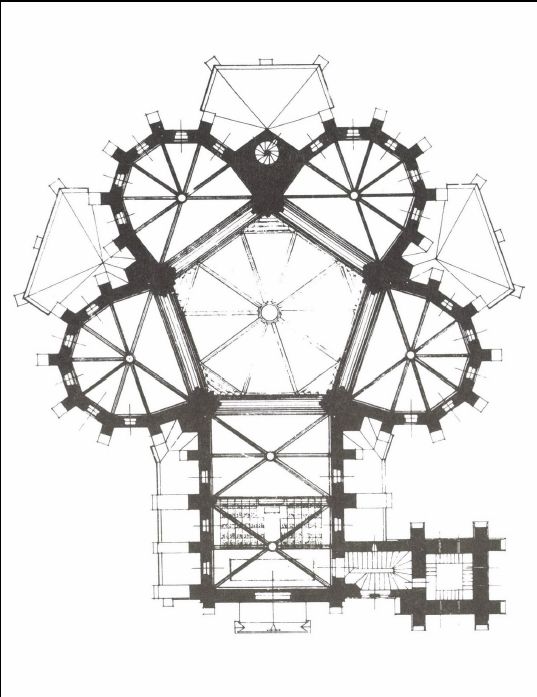 Floor plan of the church from the tender prepared in 1891 (Source: Ars Hungarica, 2nd Issue of 1996)

For the Reformed, preaching was the focus, so he placed the pulpit centrally in a pentagonal floor plan, built high on one of the pillar bundles to spread the pastor's voice well everywhere. And in the middle of this square, he placed the communion table, which the faithful can stand around. This pentagon is thus the spiritual centre of the building, the faithful are housed in the aisles with a semicircular floor plan connected to it so that they can observe the ceremony without hindrance.

The Danube Bank of Buda in 1938, on the right side with the Szilágyi Dezső Square Reformed Church (Photo: Fortepan/No.: 129781)

Samu Pecz designed the church in the style of northern German brick architecture, so the facades were covered with raw brick, and the portal and most of the windows have a pointed arch, although circular windows open in the middle pentagon. He covered the roof with colourful Zsolnay tiles, which had to be nailed to the support slats due to the high angle of inclination. It is interesting that Gyula Sándy, who helped Samu Pecz to build the church, monitored the placement of tiles with a binocular from the window of the house on Toldy Ferenc Street and spotted when a worker missed a nail and then held the unsuspecting sloppy worker accountable. Beyond maximalism, the roof played a really important role, as it protected a very ornate interior compared to the Reformed churches. 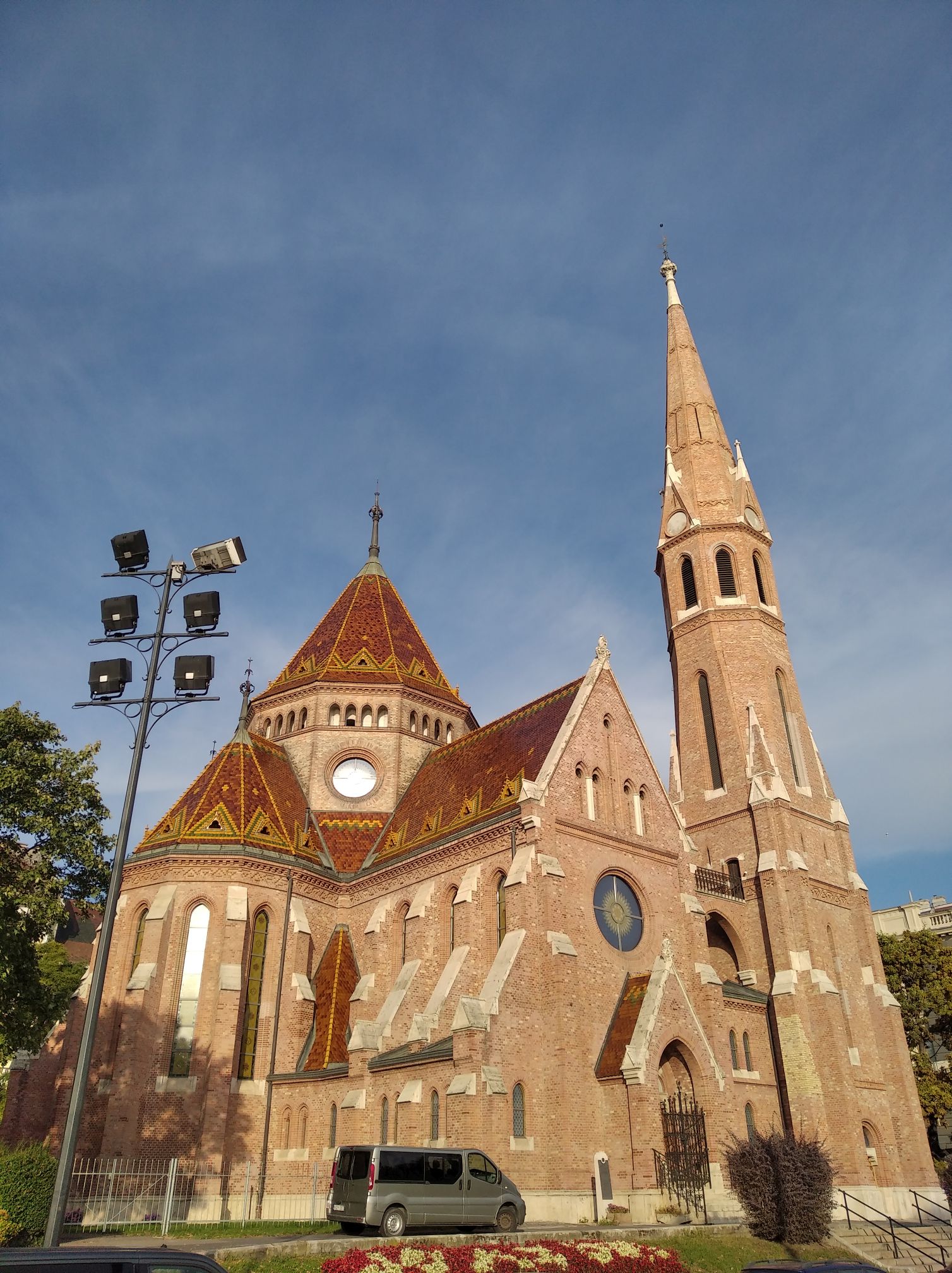 However, the unique location of the church proved to be a curse in World War II, with the building severely damaged during the siege. Although its exterior was restored relatively quickly, the interior was only renovated in the 1980s, not entirely to its original forms. The exterior also enjoyed an advantage in the 21st century because it was beautifully renovated between 2000 and 2014, only then was it decided to put the interior in full order: the goal was to restore the original condition as faithfully as possible while also placing great emphasis on meeting modern needs. 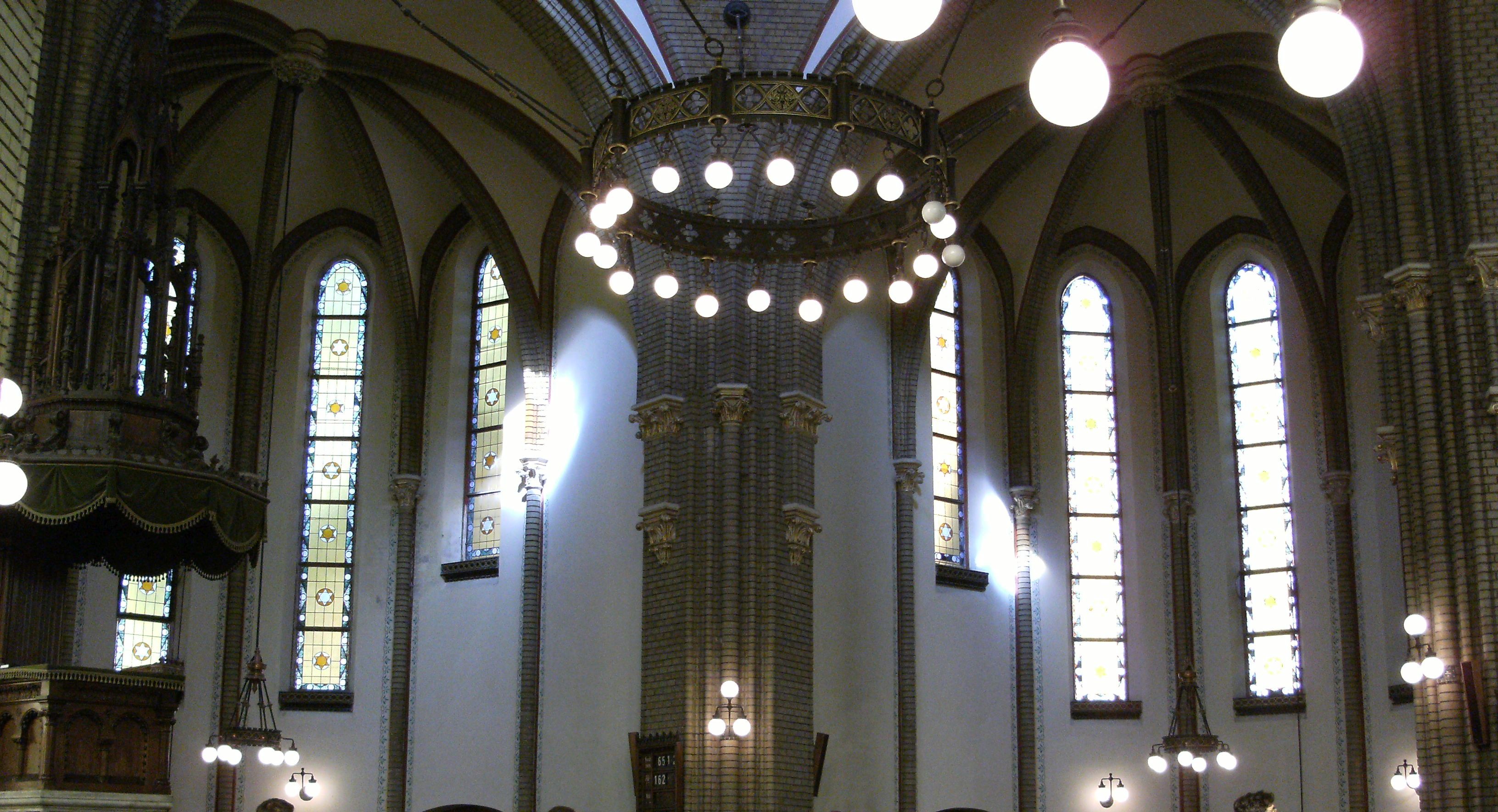 The interior before the renovation (Photo: Péter Bodó/pestbuda.hu)

The easiest way to reconstruct the original states was in wall painting, partly thanks to the archive photos and partly due to the obligatory wall research - being a monument building. The narrow and extremely high, arched windows regained their original framing painting, and in the aisles, they also repainted the strips of biblical quotations running horizontally. One of them was in good enough condition to show the original to the faithful. 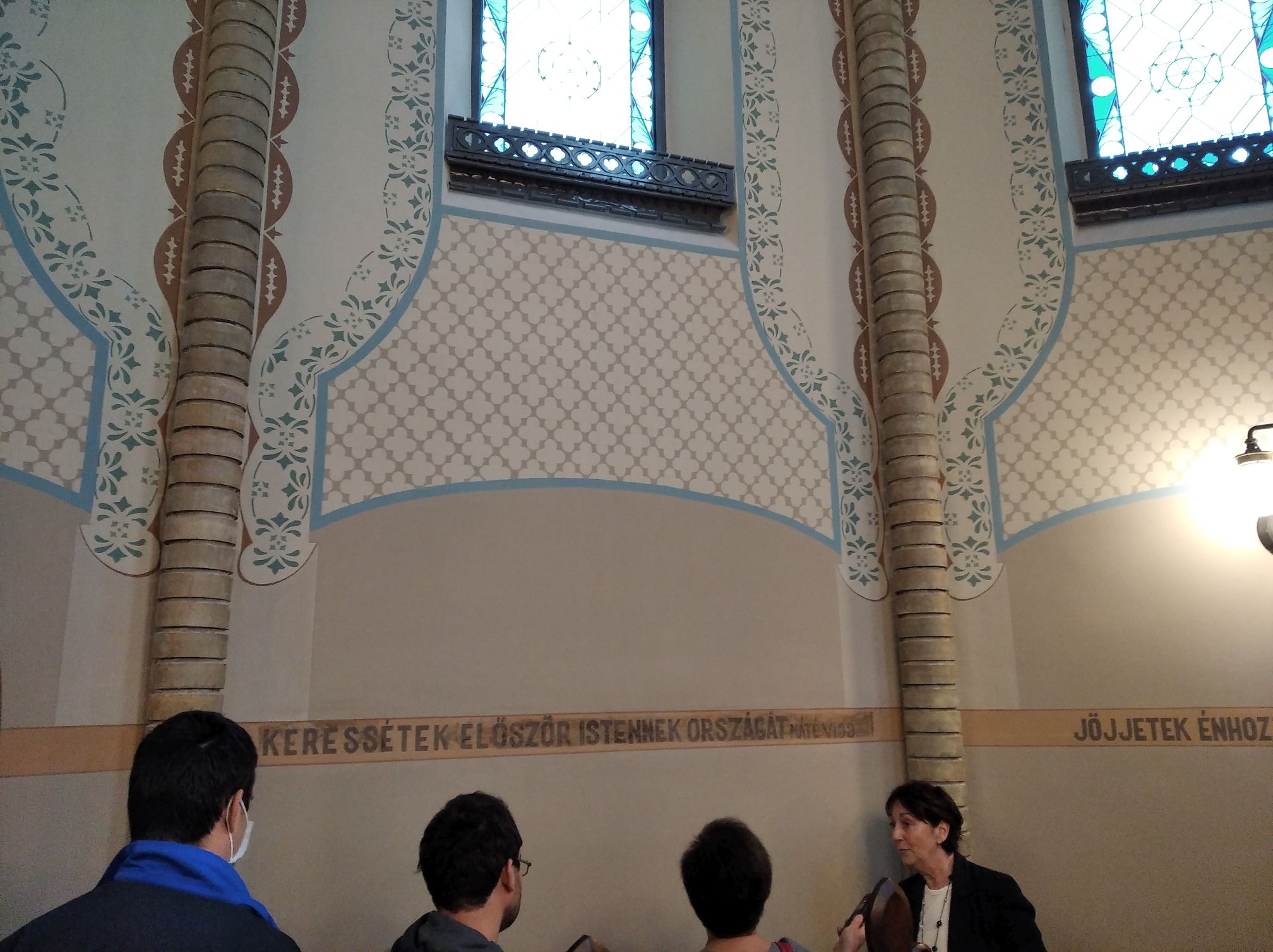 Decorative painting around the windows and the original inscription (Photo: Péter Bodó/pestbuda.hu)

They could also rely on old photographs in the pattern of the window panes, but they did not use the original stained glass technique because it captured a lot of the incoming light. Thanks to a new technology, steel window structures have been given glass that follows the original pattern but has a clearer overall effect and thermal insulation. By the way, when choosing the colour of the decorative painting, they also took into account that they fit the new windows. 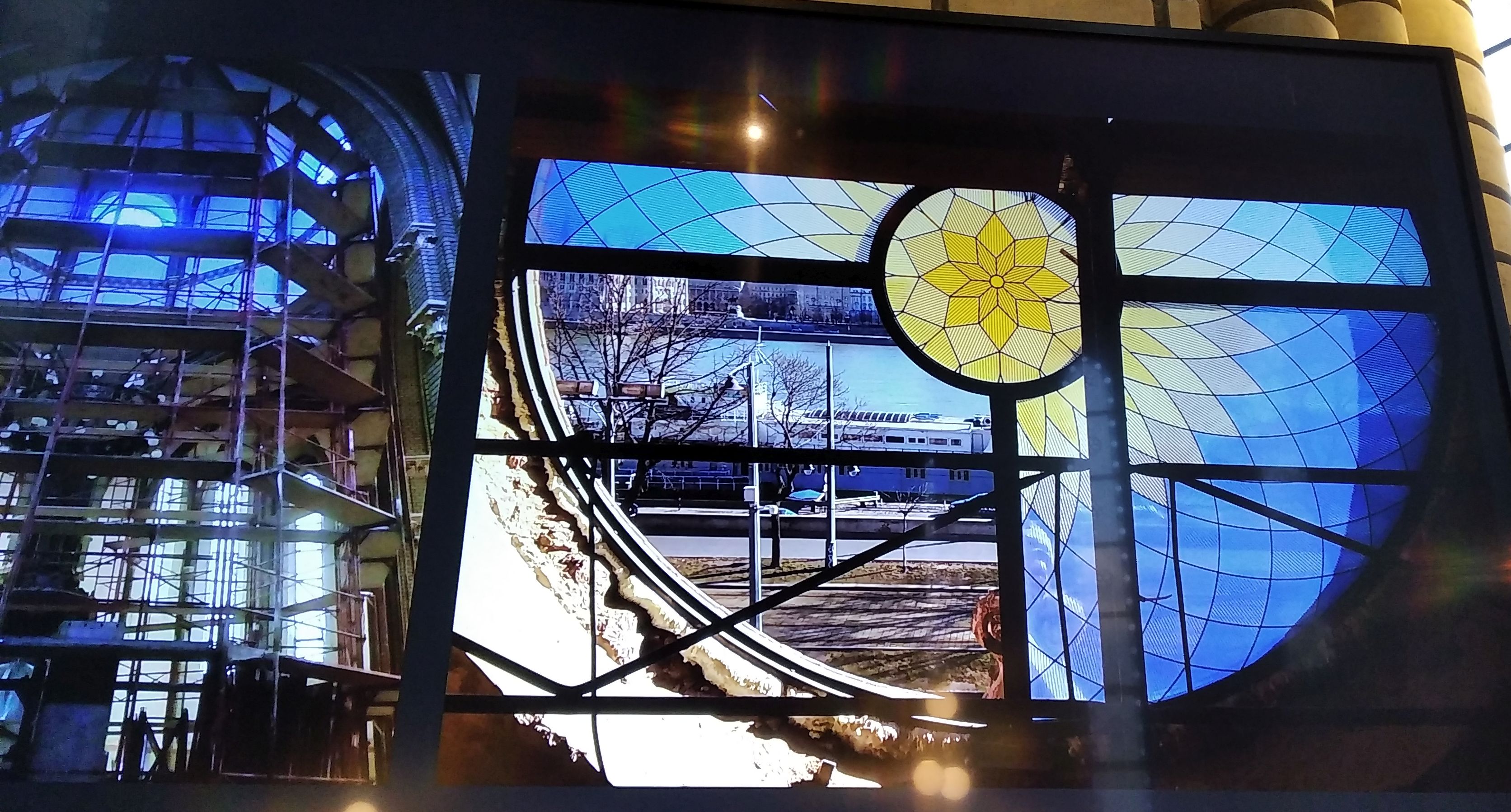 The window, produced with the new technology, during installation (Photo: Ferenc Szakál Jr.)

To achieve a brighter interior, the chandeliers have also been modernised: higher-intensity lamps have been placed in the original structures, and care has been taken to ensure that they light softly rather than intensively illuminate the walls. However, to meet today's lighting needs, new luminaries were needed: neutral-looking LED reflectors were also installed on the chandeliers and cornices.

As architect Ferenc Szakál put it yesterday, on 20 October, during a tour of the building organised to present the church, the service of the practicality in this way is completely in line with the spirit of Samu Pecz. For this reason, no attempt was made to hide the displays either: two were mounted in a conspicuous place on each aisle so that the faithful could follow the religious songs on them. 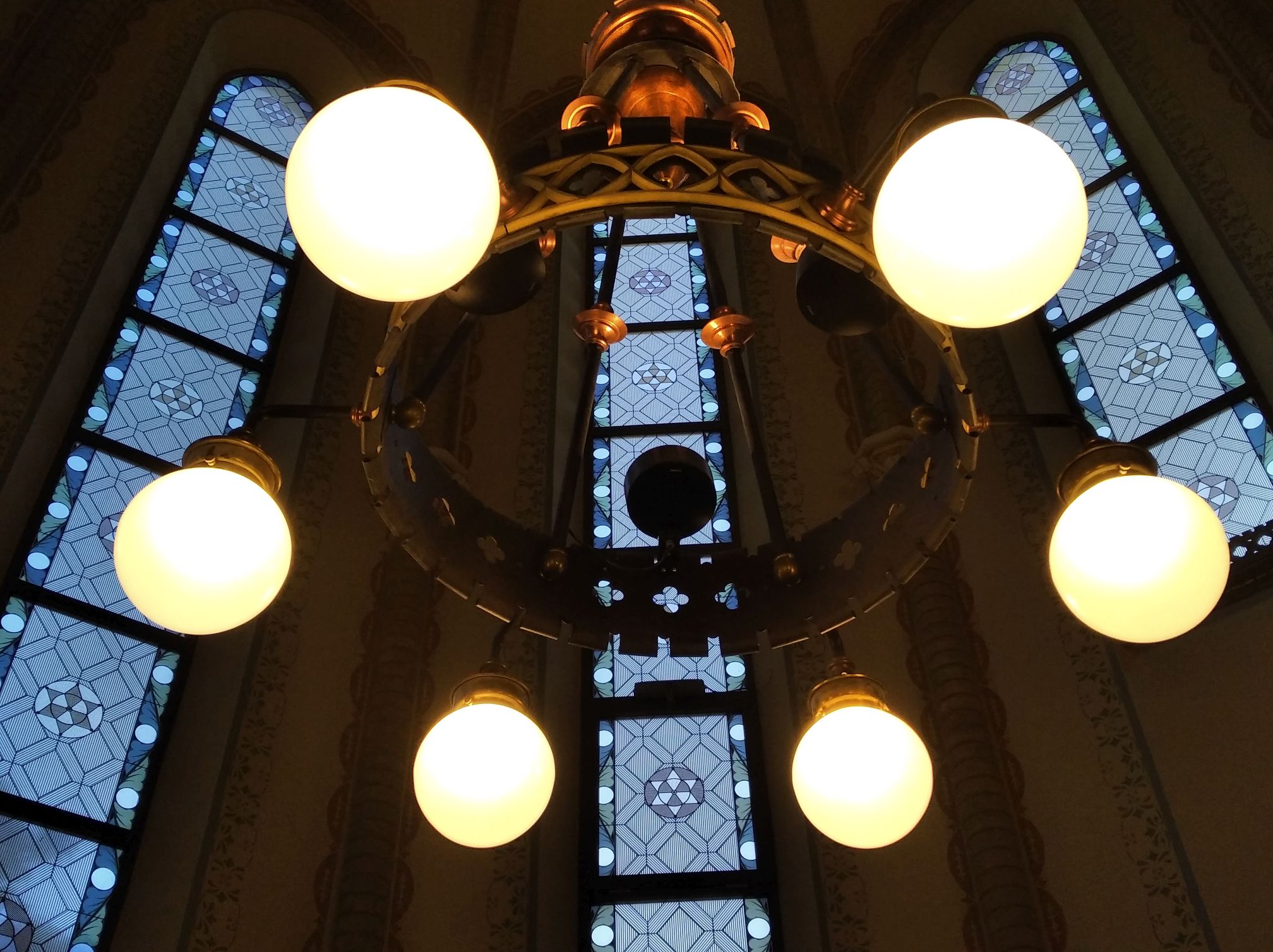 The chandeliers are also equipped with modern LED reflectors, some of them also light upwards (Photo: Péter Bodó/pestbuda.hu)

Architect Ferenc Szakál Jr. also reported on the most far-reaching intervention, the reconstruction of the floor, in his presentation. The old, unpatterned floor covering was picked up by a grapple and replaced with a 70-centimetre-thick, multi-layered floor, which includes heating pipes. A terrazzo cover was laid on top, the elegant pattern of which is complemented by the copper strips of the dilation elements. 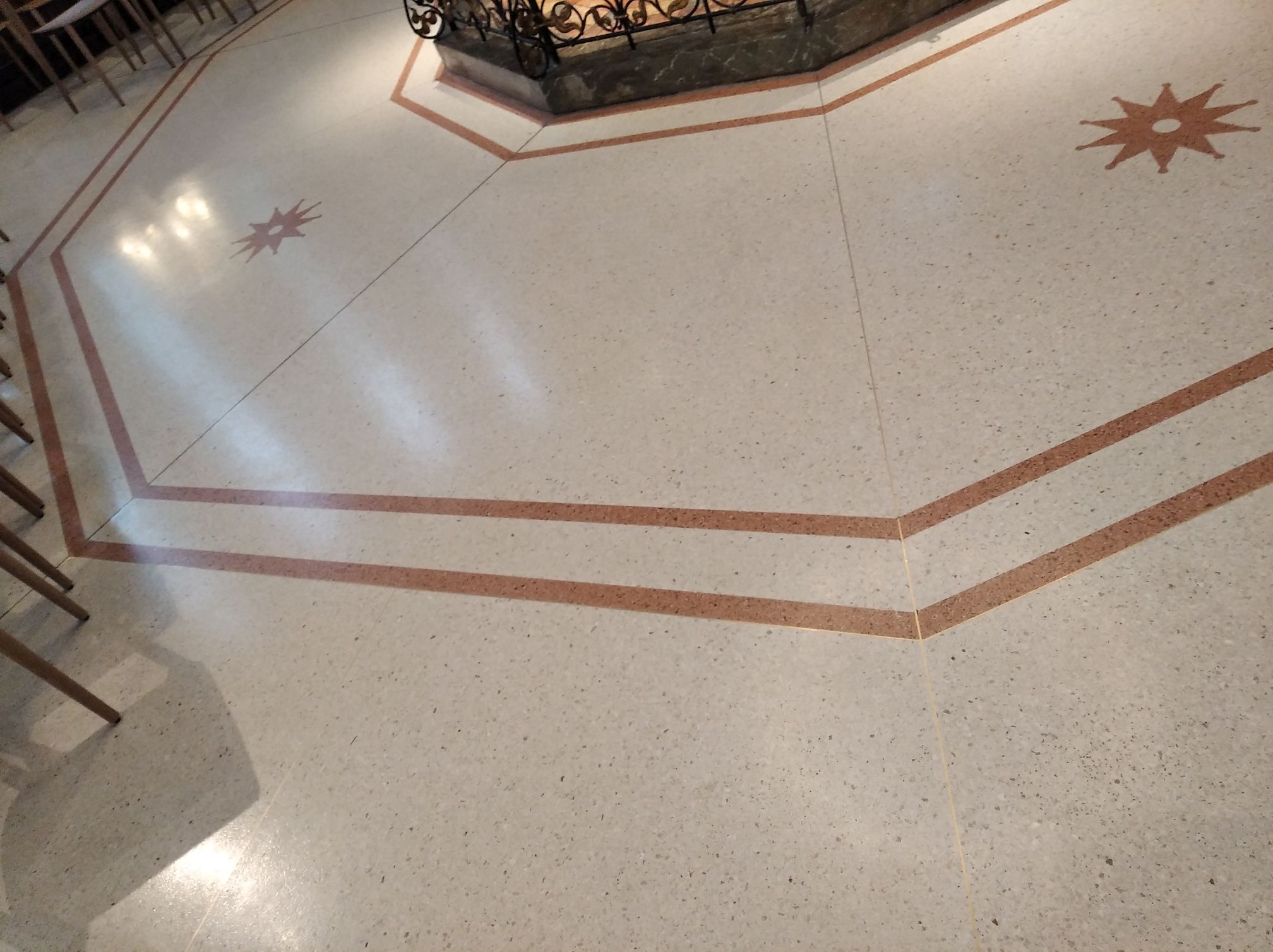 The patterned terrazzo floor and the copper stripes running on it (Photo: Péter Bodó/pestbuda.hu)

Technical caretaker László Berzétei visually presented the building engineering. He said underfloor heating alone would not have been efficient enough, so fan-mounted air-conditioning convectors powered by a heat pump system were added to the podiums of the rebuilt rows. Modern fan-coil heating was also built into the remaining gas heaters from the 1920s and placed next to the windbreak. The air exchange of the church is provided by fans located in the tower and at the top of the dome, and the lower fields of the windows can be opened tilted by remote control. 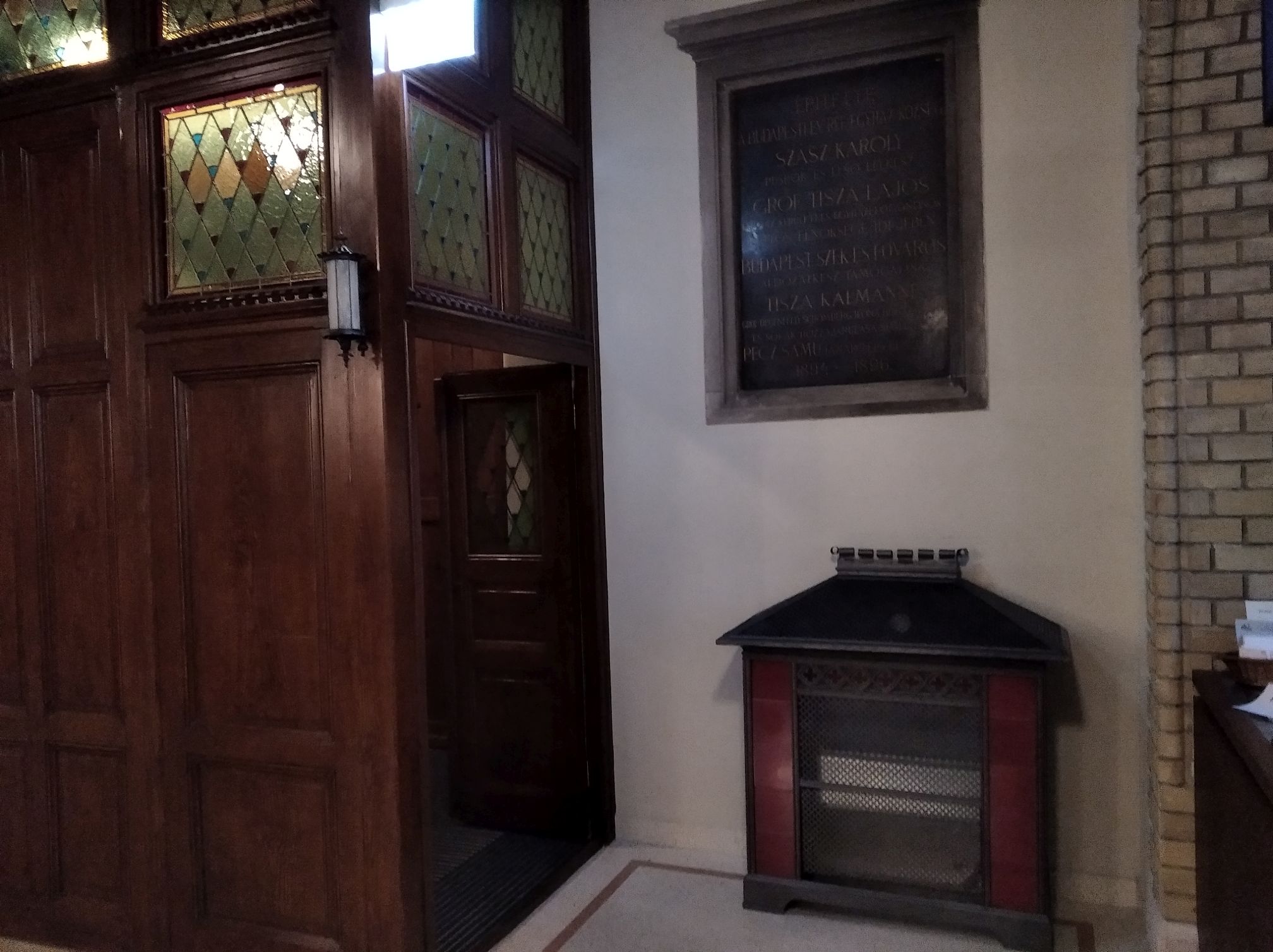 The radiator from the 1920s next to the windbreak (Photo: Péter Bodó/pestbuda.hu)

Also in line with modern needs, the rows of benches were pushed back to leave more space for events in the middle of the church, around the communion table. In addition to religious services, this popular building also used to be a venue for concerts and performances. For this reason, they also procured domestically made wooden chairs that can be brought forward on demand. Their light brown colour harmonises nicely with the terrazzo floor. 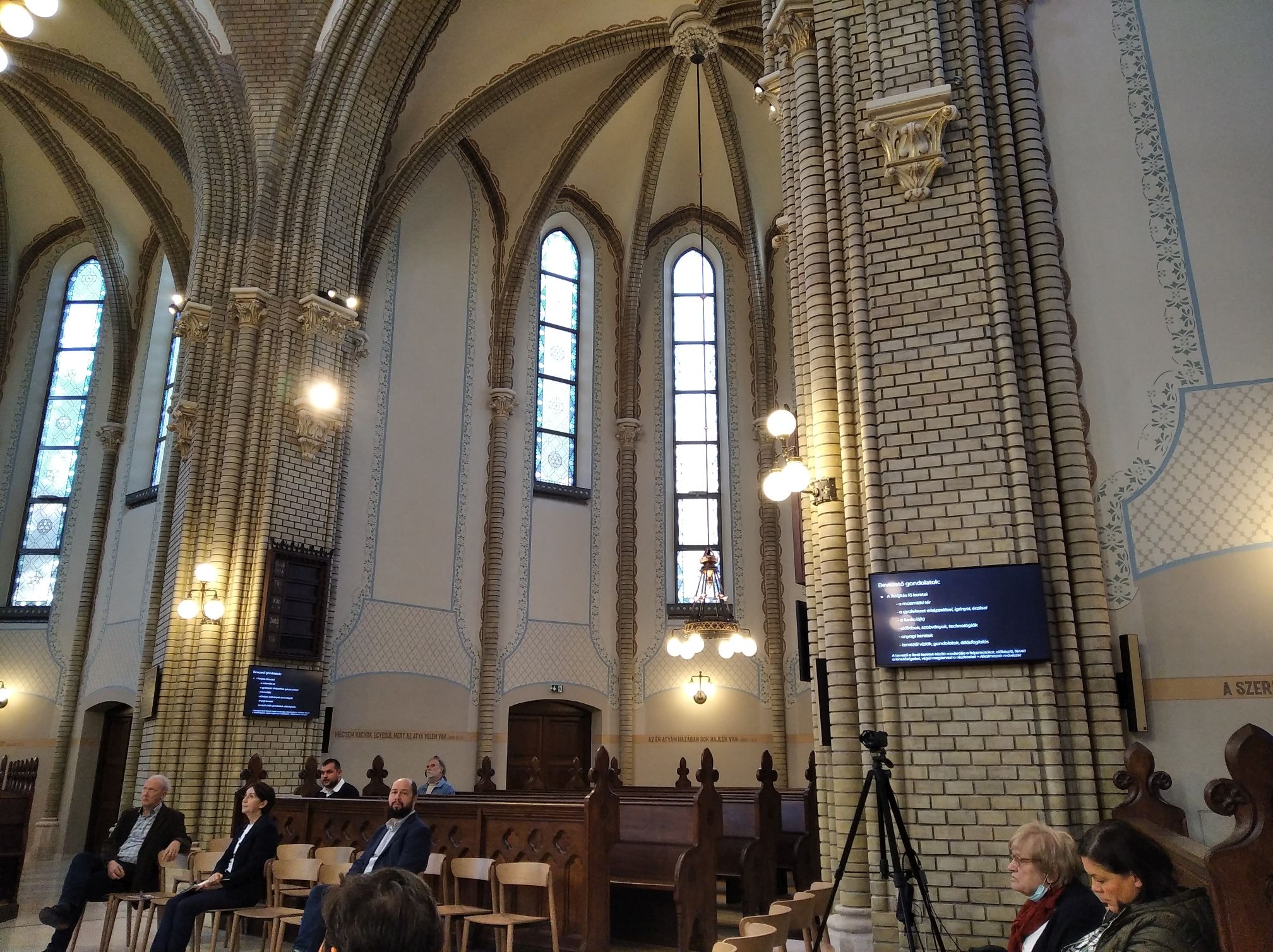 Modern displays and new chairs have also been installed in the renovated interior (Photo: Péter Bodó/pestbuda.hu)

The congregation also wants to expand the beautifully renovated and modernised interior in the near future. There would be a great need for a room in which children would have a special session during the services. This would be made on the north side of the building, behind the tower: it would be contemporary but perfectly suited to the style of the building, which would not even be visible from the street due to the tower.

The jubilarian church can thus finally be said to be in good condition inside and out, not only enriching the world heritage cityscape with its brick facade and glazed tiles, but the faithful can also attend the services in an even better atmosphere thanks to the more spacious and brighter interior. The thorough work praises the work of László Berzétei, Ferenc Szakál, Ferenc Szakál Jr., Csongor Szijjártó, Réka Júlia Csorba, Eszter Sánta, Beatrix Paksi, Orsolya Brindzik, Balázs Puskás and Gábor Nagy. The renovation was possible with the support of the Hungarian government.

Pestbuda already reported on the church's history: The first Reformed church in Buda was the neo-Gothic masterpiece of Samu Pecz on Dezső Szilágyi Square