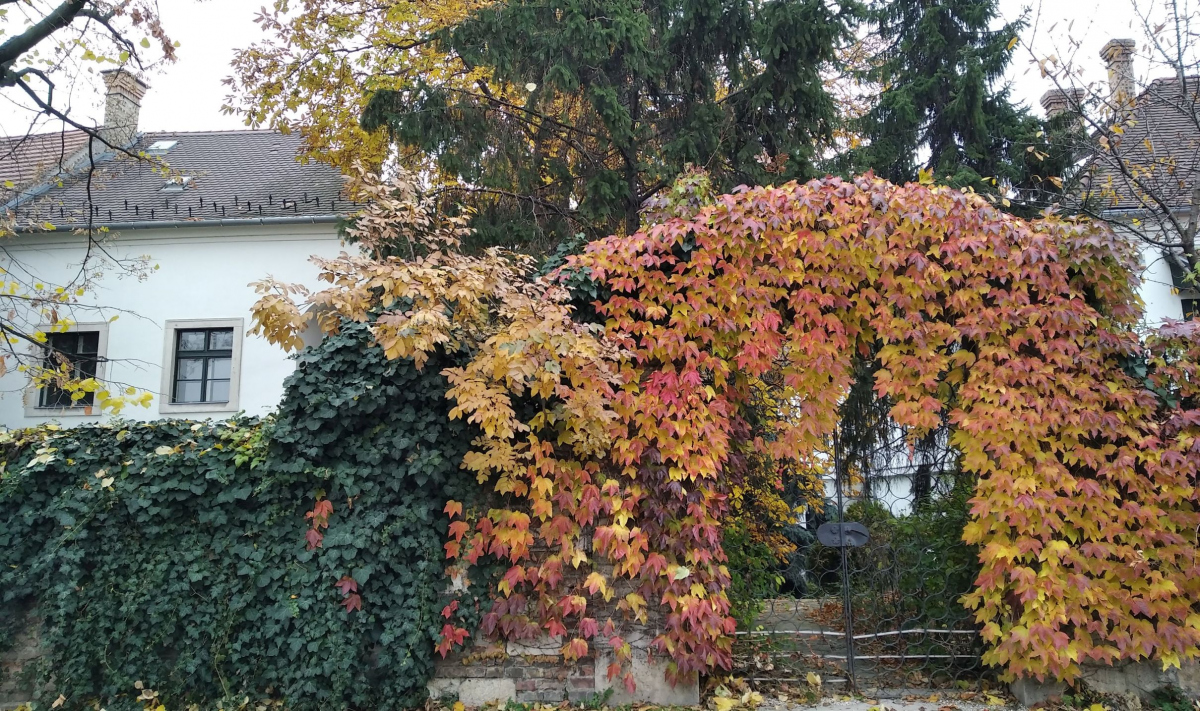 Babits Mihály Promenade is one of the most romantic streets in Budapest. It runs along the castle wall of Buda, and although the tourist traffic is huge nearby, only a few are walking in this relatively hidden area. Yet it was created in the 1930s precisely because it opened up a magical panorama of the entire city, and it was hoped it would attract foreign visitors like sugar.

By the end of the 19th century, the castle wall of Buda had lost its former military significance and its fate turned precarious. The gates were demolished because they obstructed traffic, and the wall itself was built around. After the trauma of Trianon, more attention was paid to our remaining built heritage and so the perception of the castle wall changed. The reconstruction of the Vienna Gate was already decided by the Budapest Public Works Council in 1930, and by 1936 it had been carried out according to the plans of Jenő Lechner, mainly following its original form. 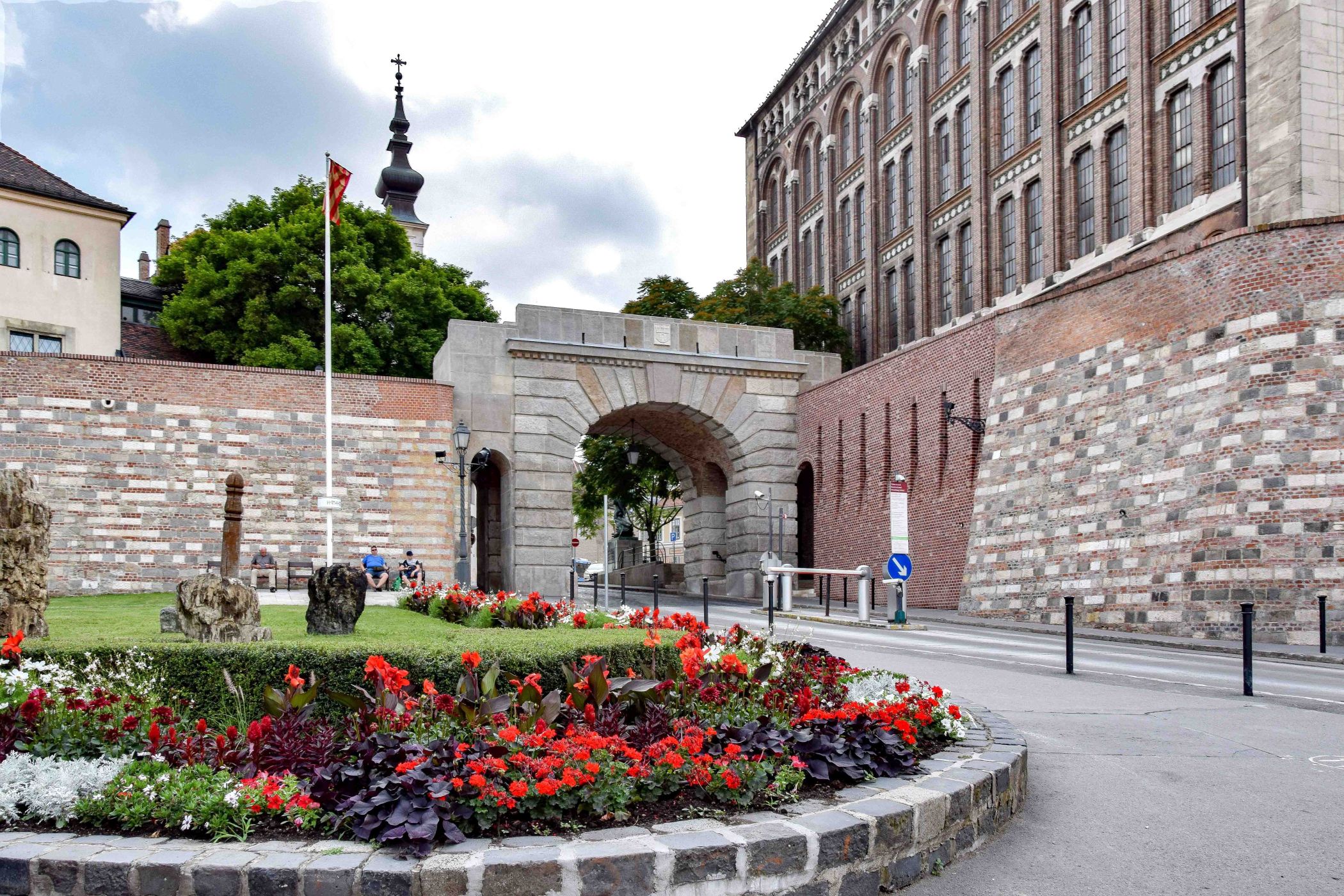 The Vienna Gate was rebuilt in 1936 (Photo: Balázs Both/pestbuda.hu)

However, the beautification of the castle wall did not stop here, as it was obvious to include the section running on the east side of the new gate in the development. A promenade had already been built along the western side of the wall, and this would have been continued on the side overlooking the Danube. However, the gardens of the aristocratic palaces on Verbőczy (now Táncsics Mihály) Street extended all the way to the castle wall, thus blocking the planned promenade. From 1930 onwards, the Public Works Council, as an authority, took over most of the gardens through public expropriation. 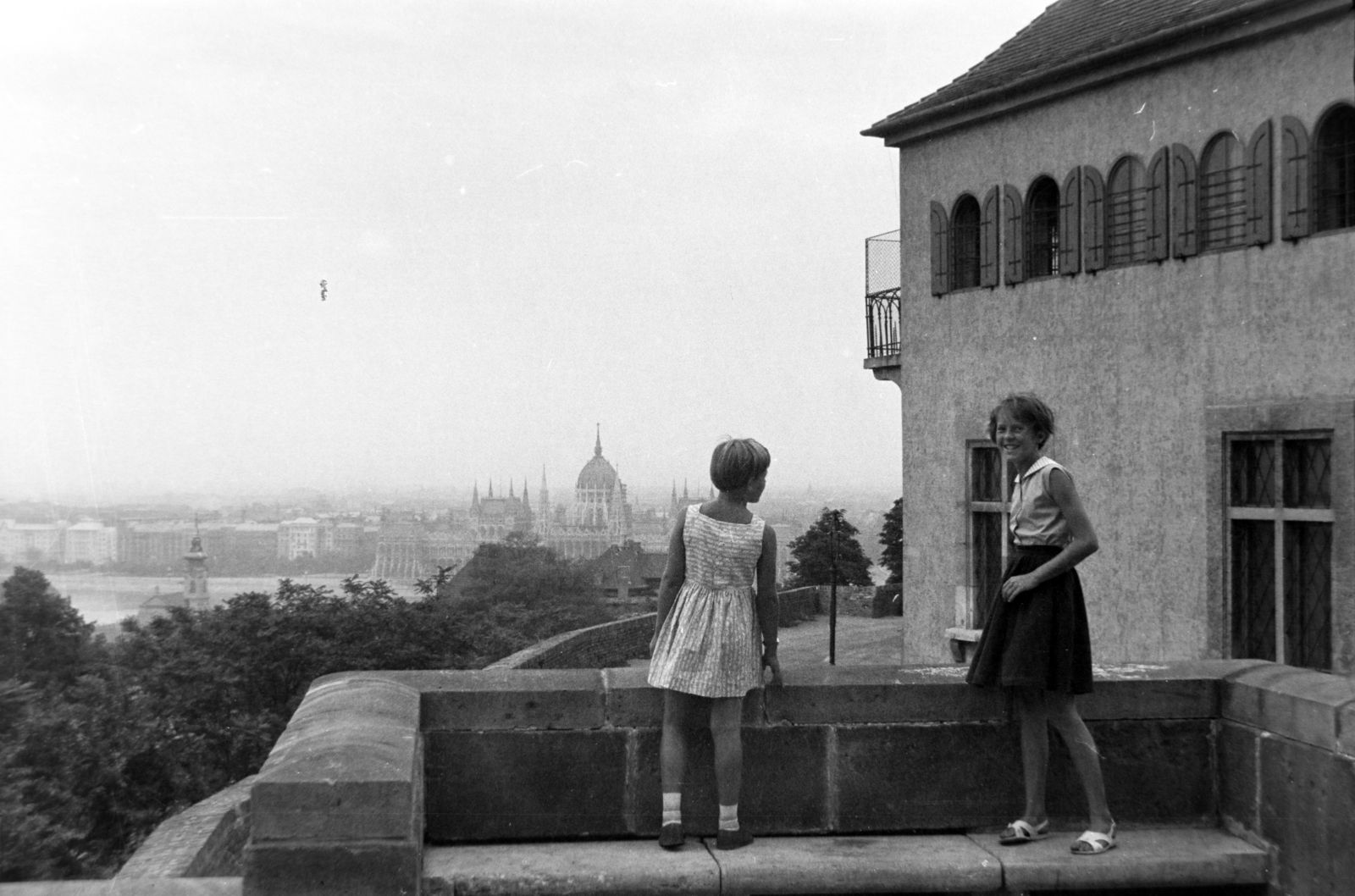 Due to the beautiful panorama, it is understandable that the area was already of great importance in the Middle Ages, for example in 1461 a synagogue was built here. In the 19-20th century, the most famous noble families bought land here: the Keglevich, the Zichy, the Apponyi and the Hatvany families. In addition to them, there were wealthy citizens among the residents: for example, actress Emília Márkus or businessman of French descent Louis Cartier. 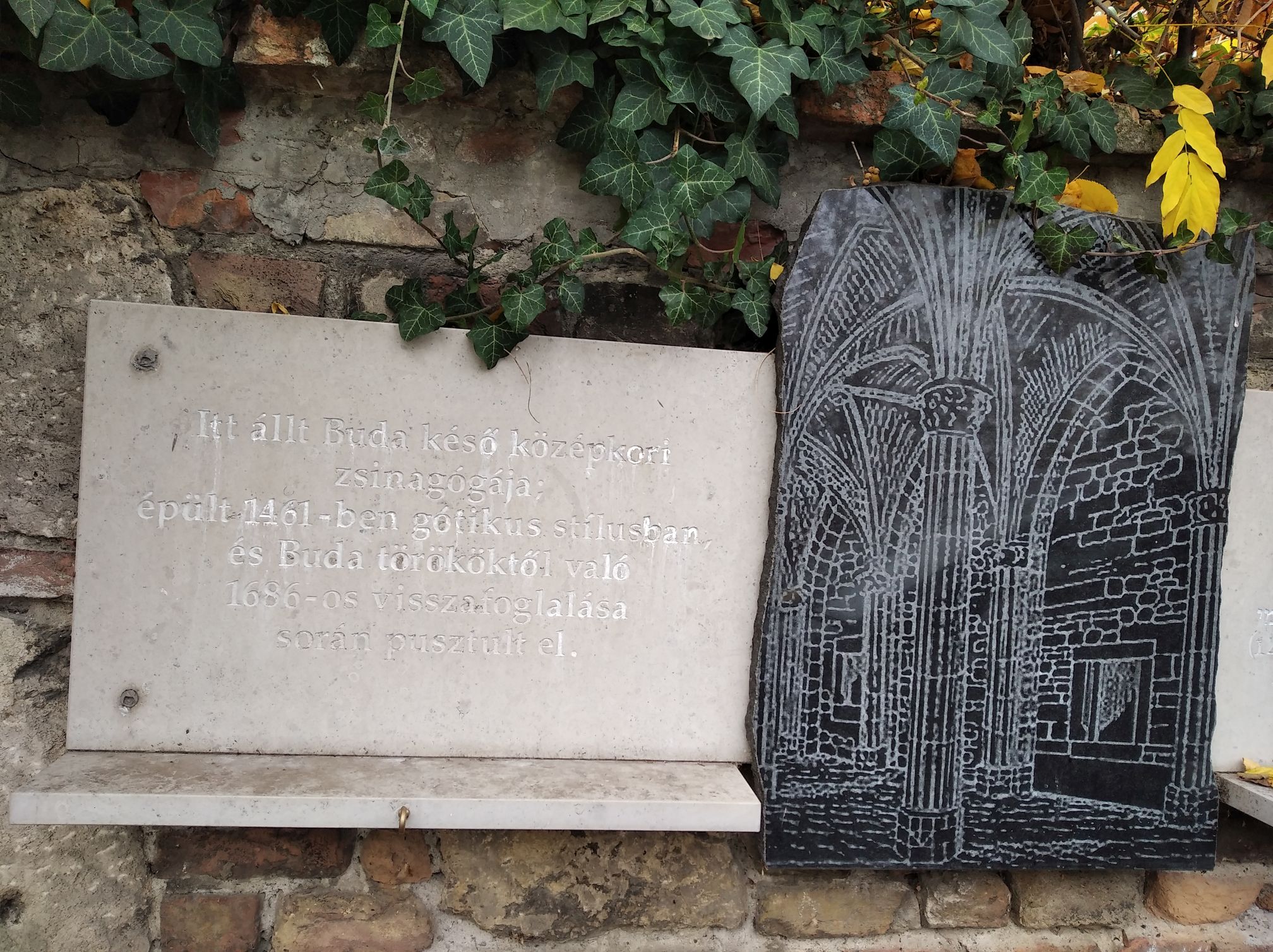 A memorial plaque announces the medieval synagogue on the promenade (Photo: Péter Bodó/pestbuda.hu)

Count Albert Apponyi, who was also an honorary citizen of the capital, spent most of his time in his palace here in his old age, and it was in the secluded little garden that he was most inspired to compile his memoirs. Therefore, at his request, the Public Works Council had not yet opened the promenade in his lifetime. However, after he died in 1933, all obstacles to the realisation of the promenade were removed. 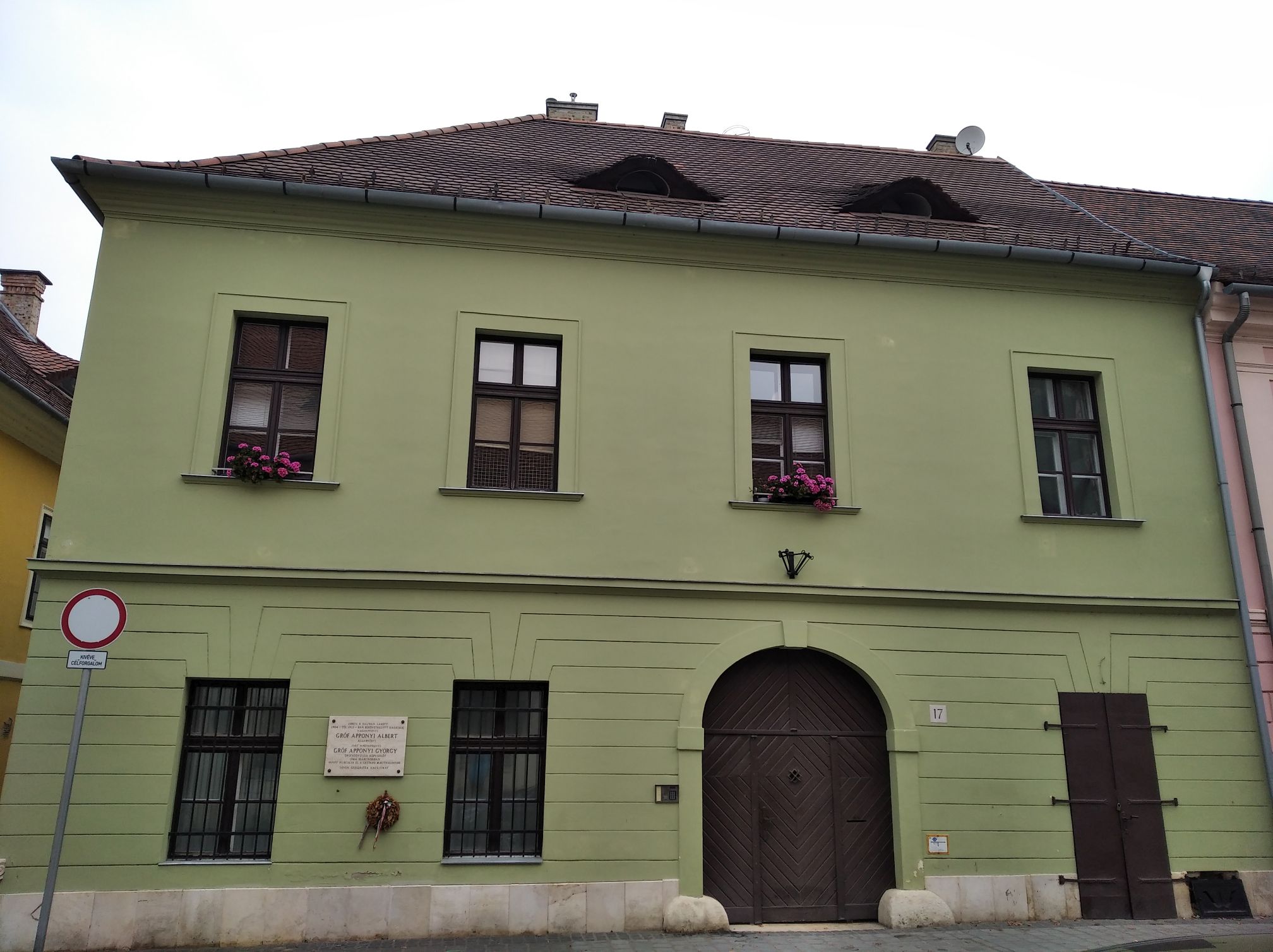 The promenade was designed to extend all the way to the Fisherman's Bastion, so that the northern part of the castle wall, from Szent György Square through the top of the rebuilt Vienna Gate to the Szentháromság Square, became completely walkable. At the former József Barracks (where Mihály Táncsics was also imprisoned until 15 March 1848), the line of the fortress was broken by the Transylvanian bastion built in the 1530s, forming a polygonal protrusion. The promenade did not follow this, only a small arc turned to the section where the Hatvany-Deutsch Palace and the British Embassy stood (the former was given to the Institute for Musicology and the latter to the Monument Protection Inspectorate). The Public Works Council, perhaps for diplomatic reasons, did not attempt to expropriate, but instead, they left the gardens intact and built a cantilever walkway on the castle wall itself, which led to the Fisherman's Bastion. 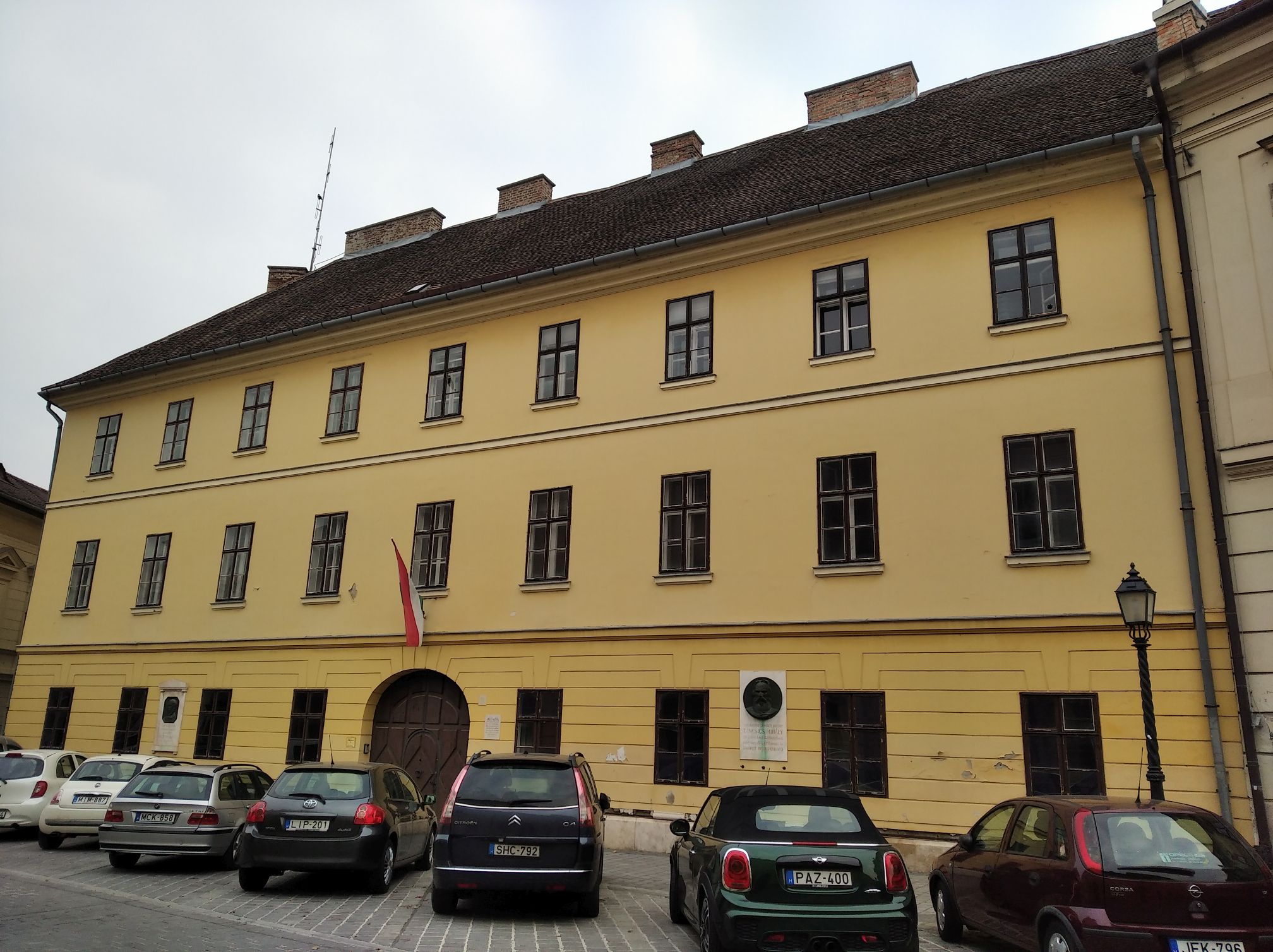 The new public area was named Horthy Miklós Bastion Promenade and was handed over in 1936. It was significantly affected by World War II but the major changes came after that: in 1945, it was renamed after the famous poet Mihály Babits, who had died four years earlier, and was shortened in 1948. The latter drastic intervention was the result of the United States receiving the plot of the József Barracks and the Transylvanian Bastion for reparations, thus eliminating the passage between the northern and southern halves of the promenade. Fortunately, it did not become a dead end, as a narrow street leads to Táncsics Mihály Street next to the Apponyi Palace. 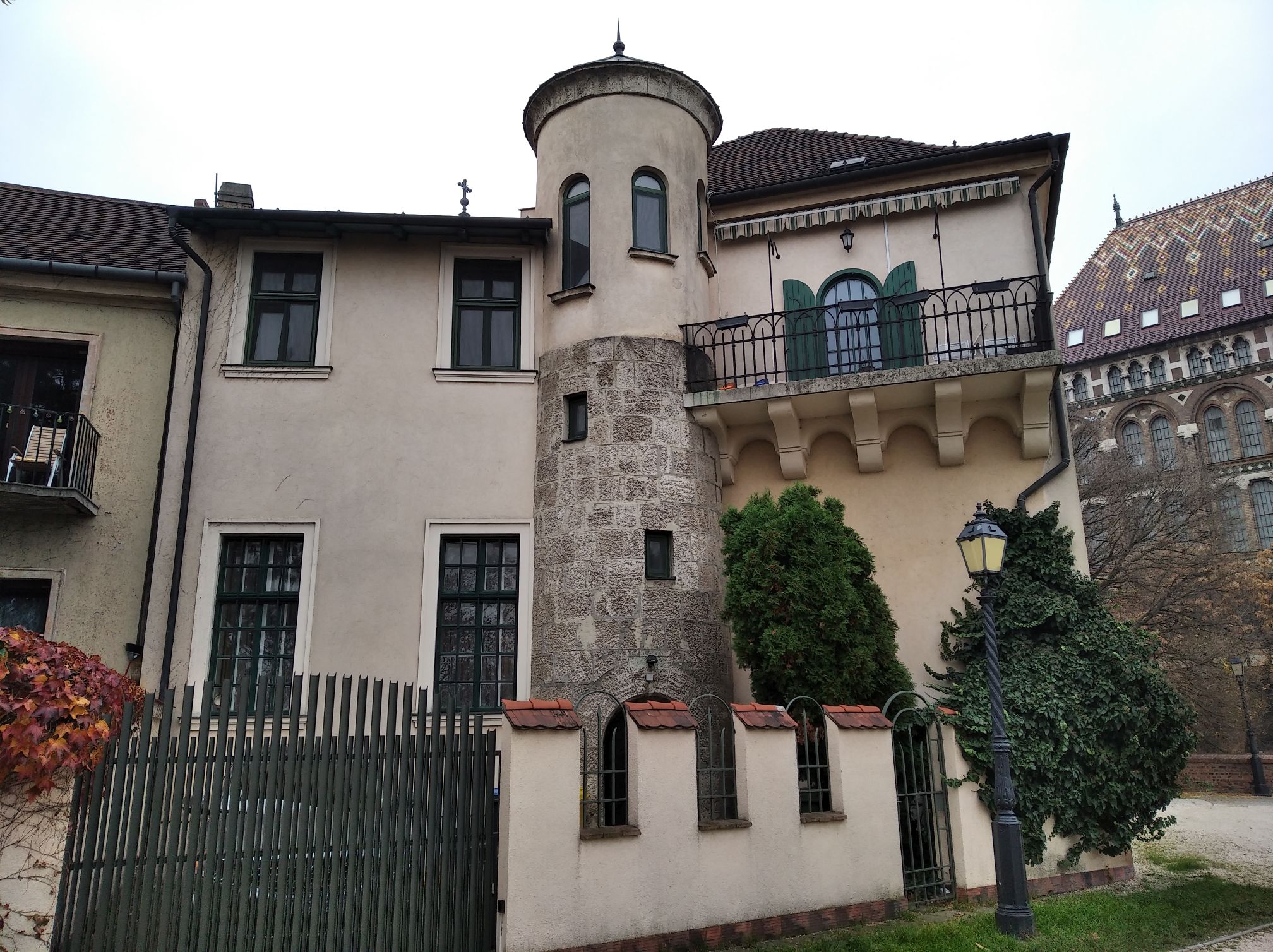 The memorial plaque of Mihály Babits was placed on the wall of the former Keglevich Palace in 1965, which is the most exciting architectural monument on the promenade. The east side of the building is made eventful by a Neo-Renaissance balcony and a semicircular tower with a staircase. The green sash of the upstairs semicircular windows looks perfect on the facade covered with yellow plaster. The house, built in the 18th century, was bought by Count György Keglevich only in 1920, then in 1929, he sold the part looking over the promenade to Count Károly Csáky. The said Neo-Renaissance appearance was given to the building in his time. 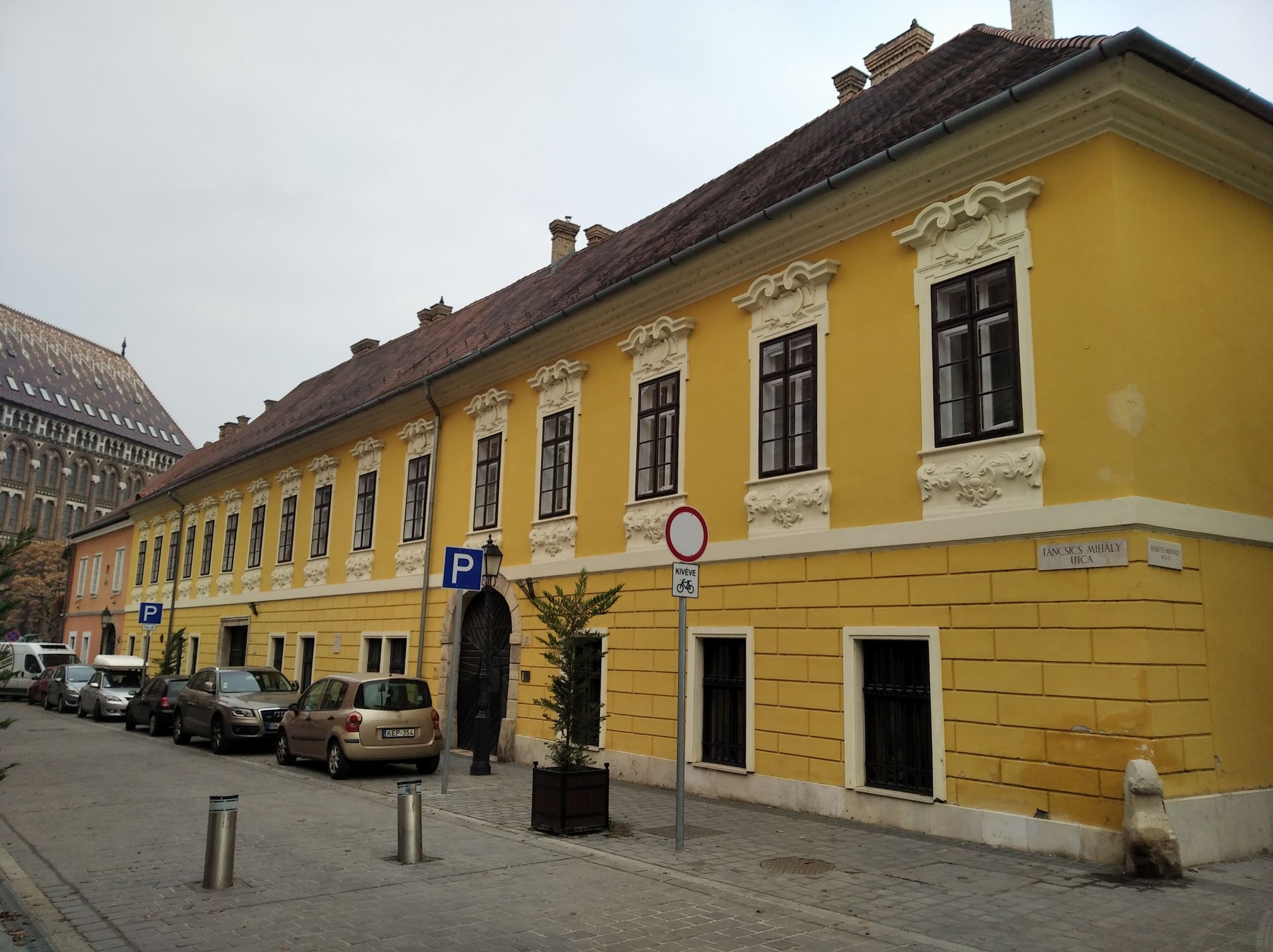 The Zichy Palace occupies the largest part of the promenade, its length is due to the fact that in the 18th century four different plots were united here by the then owner, Gábor Horányi. The new building also gained a uniform Baroque facade, then it became the property of the Zichy family in the middle of the 19th century. They also remodelled it several times, Miklós Ybl and Sándor Aigner also worked on it as architects. The single-storey rear wings face the promenade, and of course, there are balconies in front of the straight-closing windows to enjoy the view. 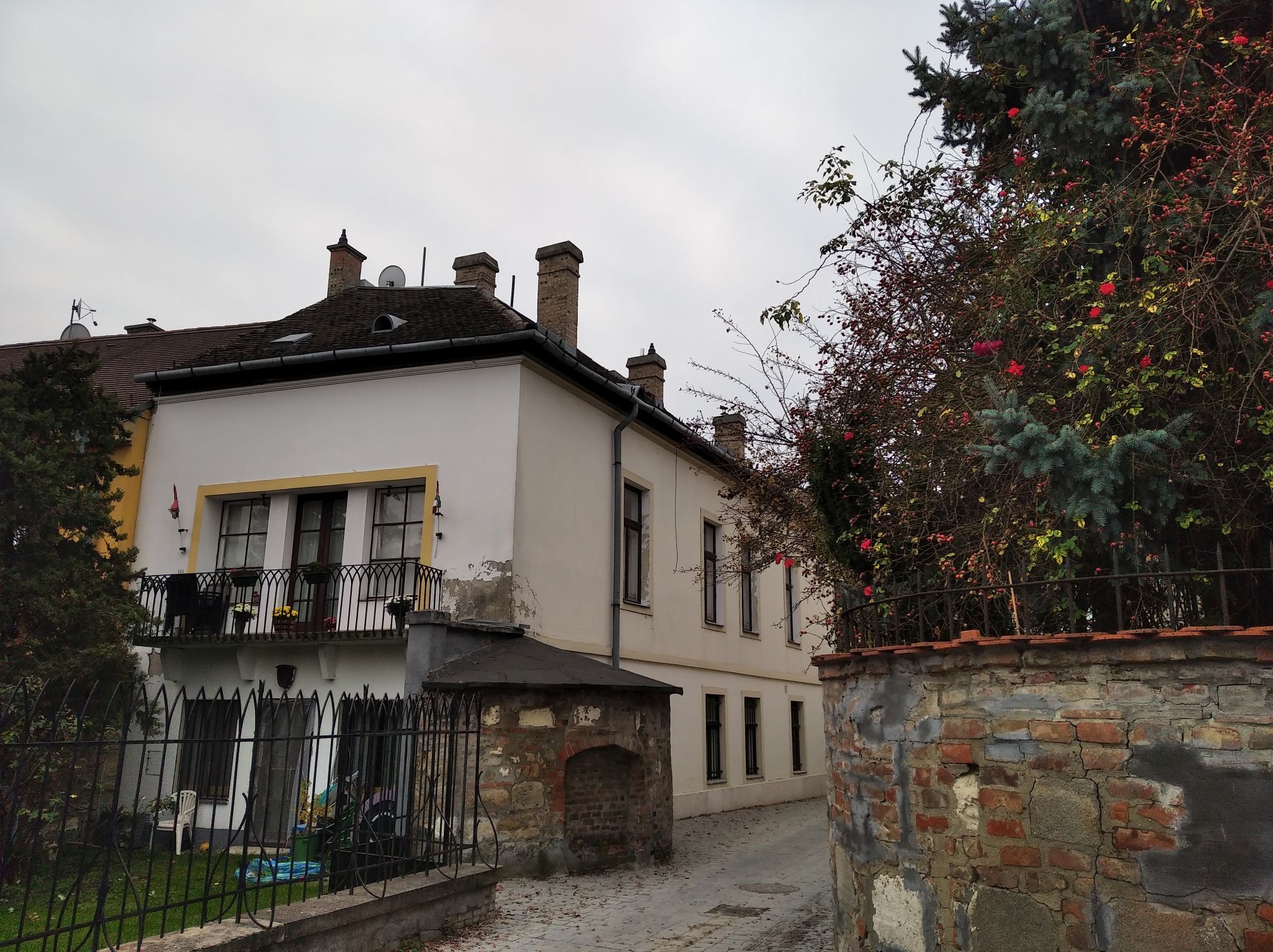 It is undeniable that the most prestigious inhabitant of the promenade was Count Albert Apponyi. He moved here in 1904, from where he also travelled to Versailles to represent his country in the peace treaty talks that ended World War I. The ground floor of the 18th-century one-storey residential building is enlivened by lines, and a memorial plaque commemorates its former famous resident on the main facade. The rear facade is much narrower, so the upstairs triple window almost fills the whole thing. At the same time, this dense yet aesthetic layout makes it more lively, which has a particularly good effect on the overall look of the promenade. 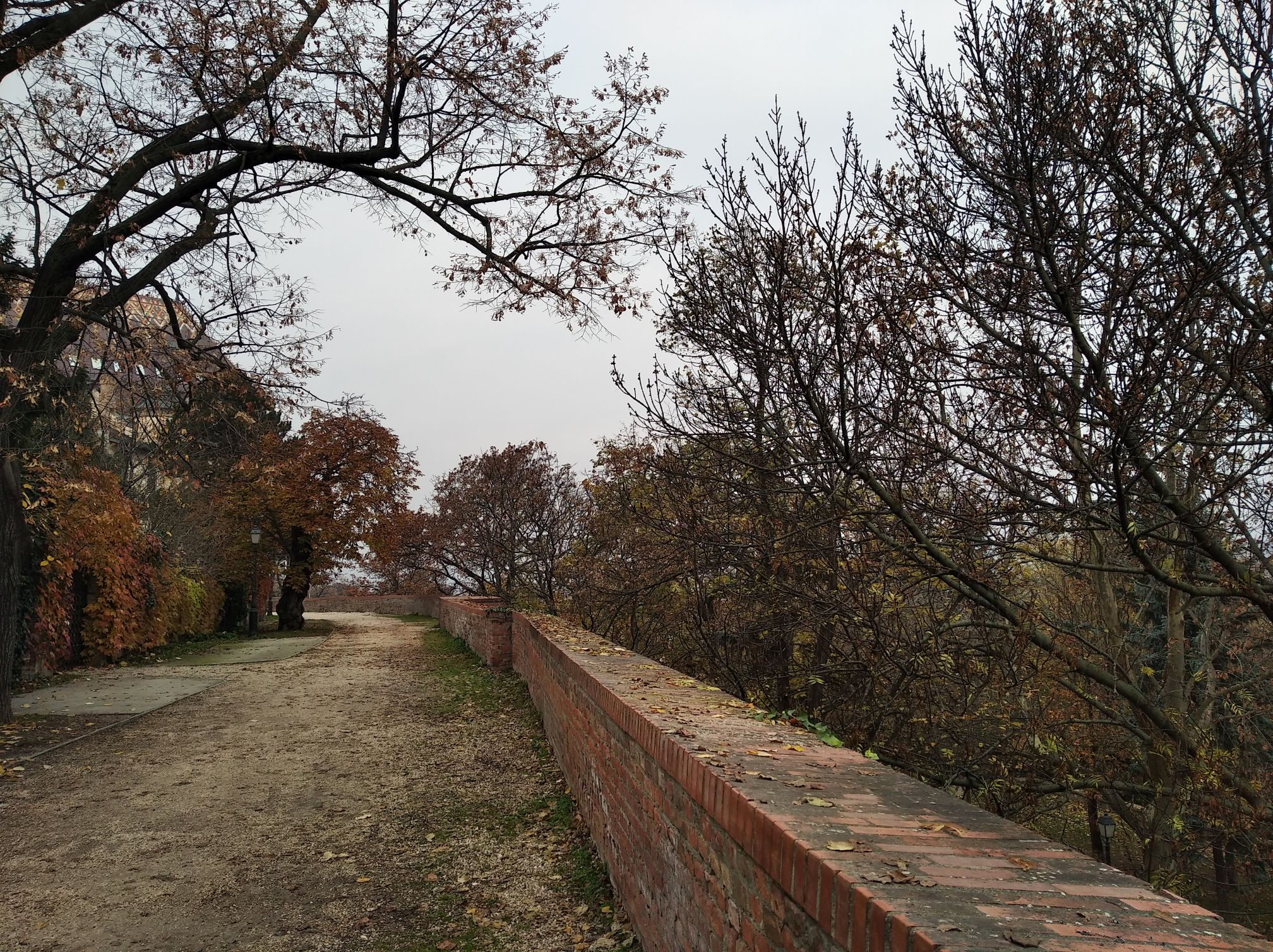 The promenade along the castle wall (Photo: Péter Bodó/pestbuda.hu)

While on one side stand the charming residential houses and their small gardens, on the other the ancient castle wall itself accompanies the passage of those who pass by. The romantic atmosphere is only enhanced by the fact that also a park, the Europe Park is located outside the castle wall. So this is an ideal place for those who love old buildings and want to get away from the hustle and bustle of the city for a short time.

Cover photo: View of the Zichy Palace from the promenade (Photo: Péter Bodó/pestbuda.hu)